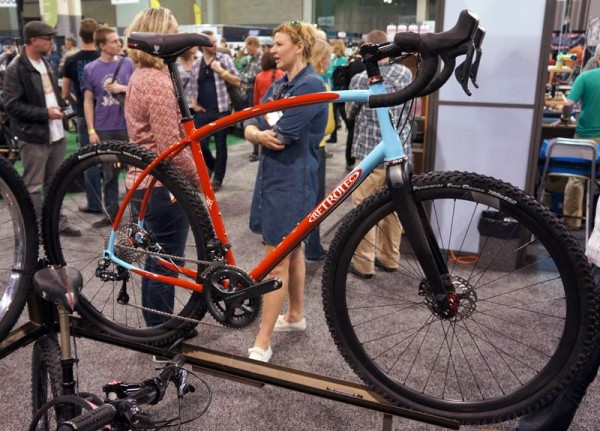 Built with 40c Panaracers that may as well have been skinny mountain bike tires, the bike was one of those that made me wanna just stow the backpack and camera and ride out without a plan. It used their signature curved design, with the arc of the top tube flowing directly into the seatstays. Even the paint scheme flowed, accentuating the curves. There were plenty of amazing ‘cross bikes at the show, but we see why this build won.

More pics of this, plus his Funduro 650B and 29+ hardtail as well as Jeremy Sycip’s first in-house titanium bikes (hint: they’re for kids) below… 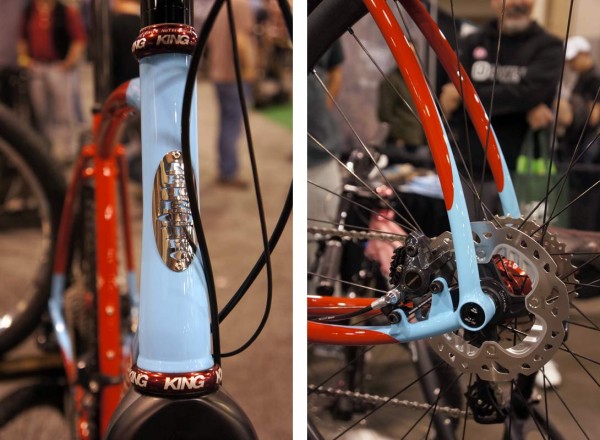 Just look at that head tube. And the minimalist disc brake tabs. Gorgeous. The bolt-on thru axle rear keeps everything tidy looking. The fork was a thru-axle Whisky Parts Co. carbon model. 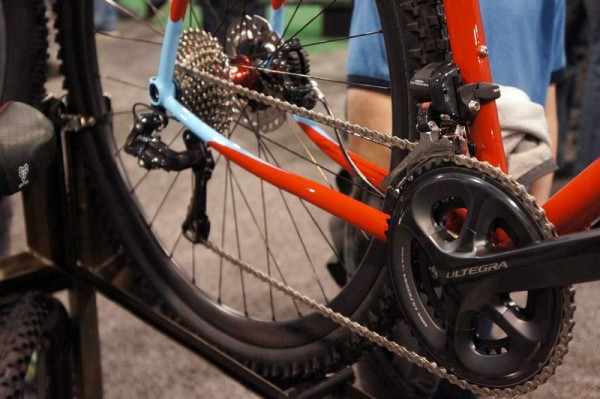 An Ultegra Di2 hydraulic disc brake group was really the icing on the cake. The bike is called the Retrotec Half, and it’ll handle up to a 45c tire. 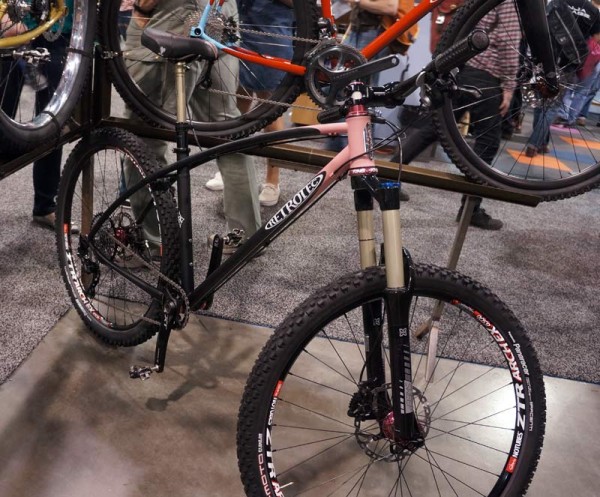 The Funduro bike was featured in our pre-show interview. Builder Curtis Inglis said he couldn’t understand why people would want a long travel hardtail. Then he built one and rode it and said “Oh, that’s why.” 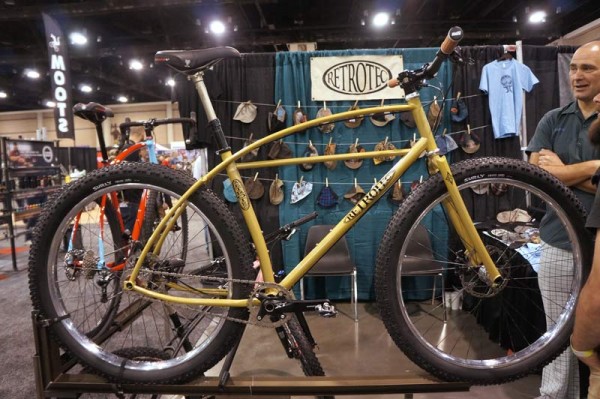 His Retrotec Triple turned into a 29+ for the show (you can get it made for regular 29er tires, too). 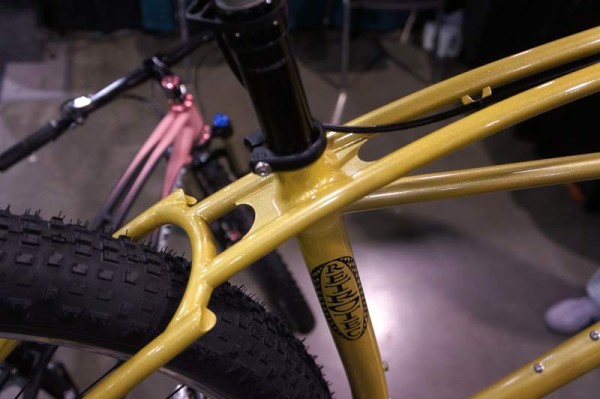 The stays get interrupted and widened for the “plus” sized tires. 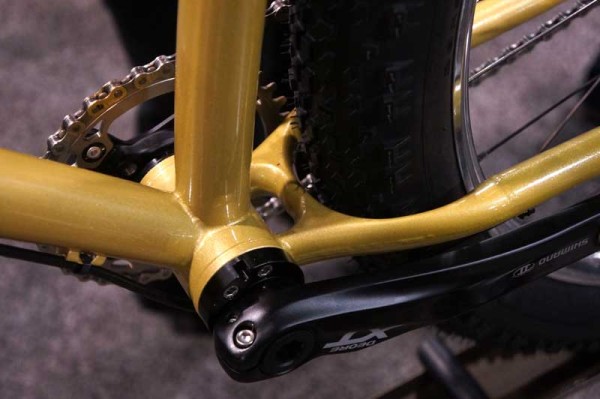 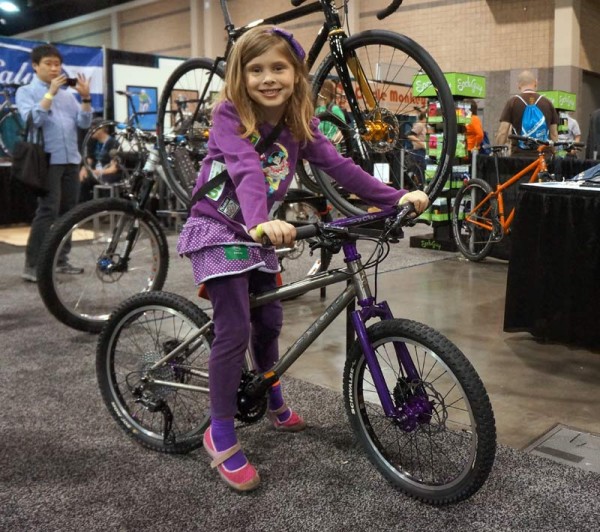 Just starting to bud titanium in house. He’s offered ti before, but they were originally built by someone else at his facility, then eventually outsourced to Kish. He would assemble the seatstay yoke, but wasn’t ready to do the whole frame. Now, he’s ready, and this kids bike is his first complete frame, built for his daughter (that’s my princess in the pic, she’s just not wearing her princess wig). 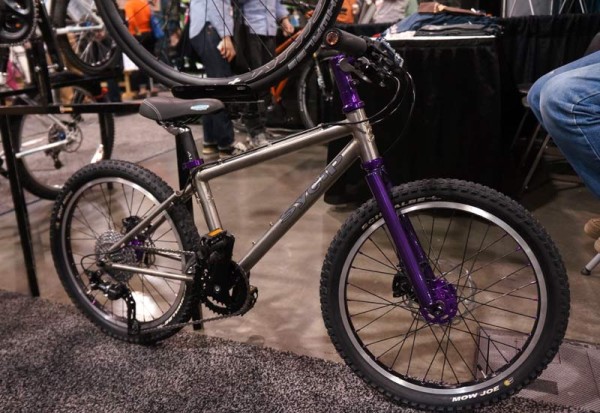 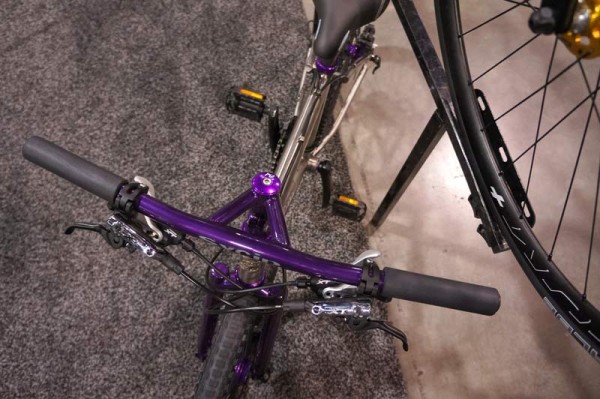 Sycip built the handlebar, too. 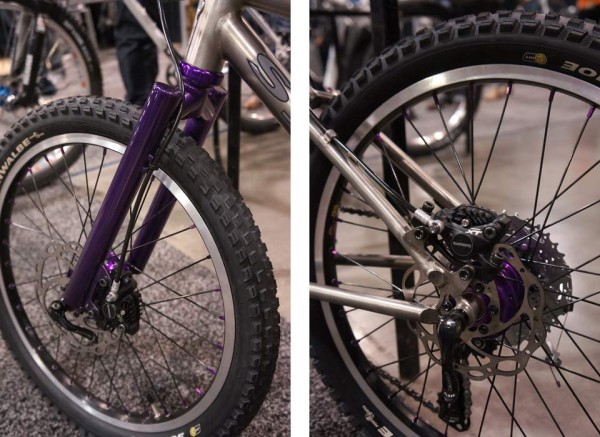 Remember your first bike? Just like this one, right? 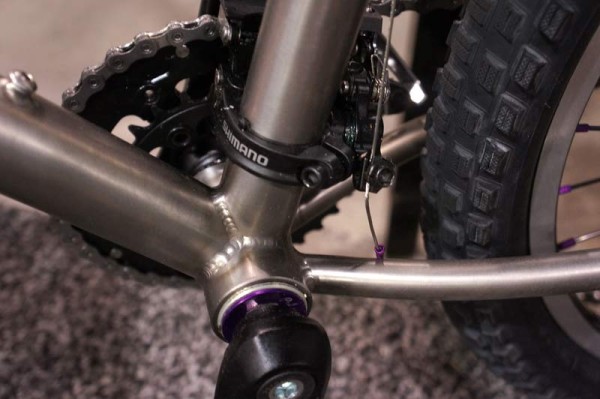 Pricing will be close to $3,500 for a normal sized ti frame, but it hasn’t been finalized yet. Pricing on the kids bikes? If you have to ask… 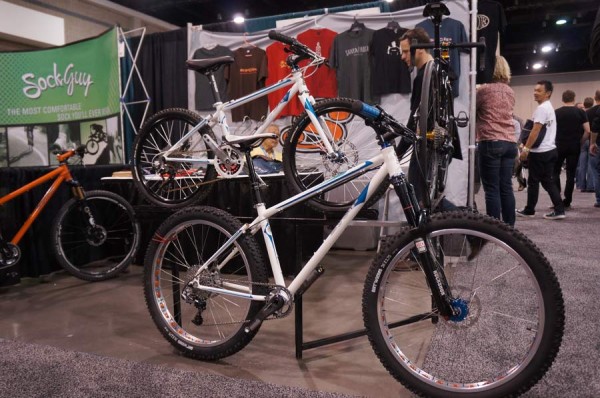 He’s doing more kids bikes in general, and this steel pair is for a father and son in the Philippines.

The kids bike is painted to match the dad’s in every way, right down to Sycip’s trademark penny in the seat stay. Those cranks are older Truvativ units that are solid. They can be cut down and tapped with new pedal holes. 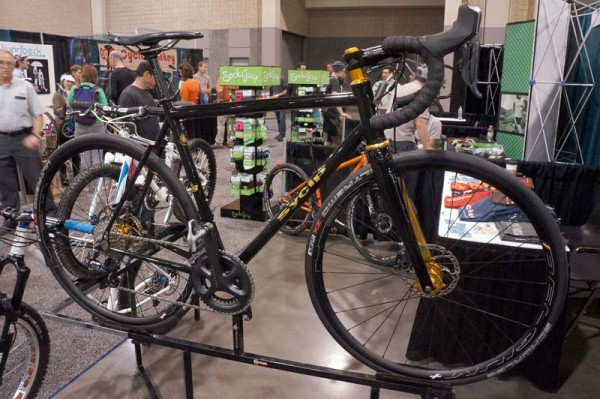 He still makes proper full sized bikes, too. This disc brake cyclocross bike showed off his talents for well made steel frames. 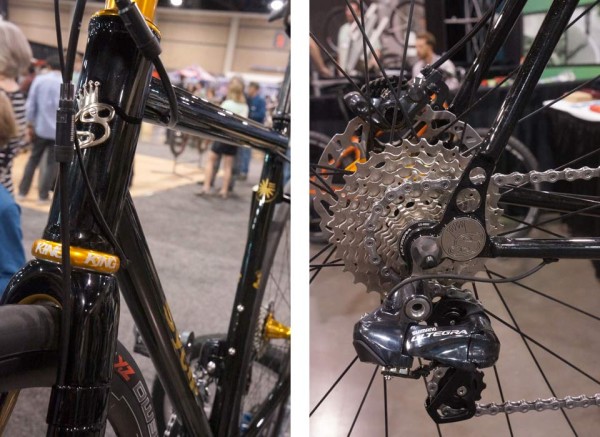 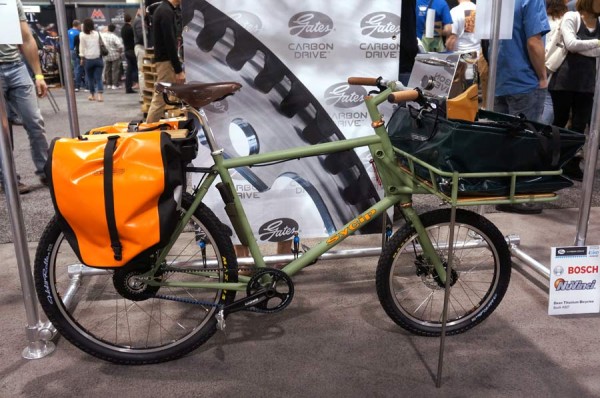 Perhaps his best bike of the show, and the winner of the “Best Theme Bike” for NAHBS 2014, wasn’t even in his booth. This camping cargo bike sat in the Gates/Bosch e-bike collection and incorporated plenty of features to make any outing more fun. 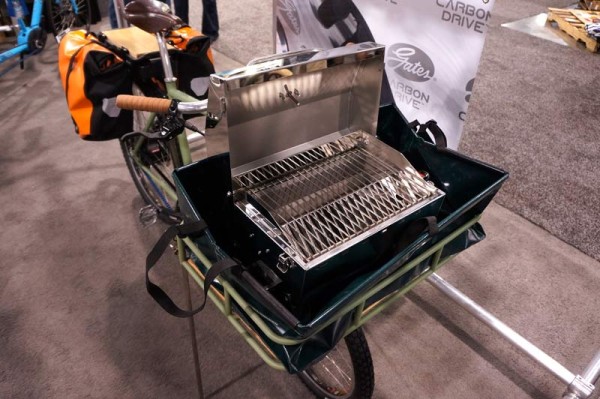 And plenty of weather proof storage, a knife and ever handy bottle opener.

looking into a custom aluminum frame, i know you have made them in the past. your Facebook was showing a 44 aluminum head tube. is aluminum still something you offer? and were could i see some aluminum cysip pics? thanks

It’s Sycip. And you might have better luck contacting Jeremy directly. http://www.sycip.com/contact.html

For Jeremy’s kid’s bike, he should have opted for a medium cage derailleur and 2×10. Looking at the clearance between the bottom of the cage and the ground has me cringing.

I do like the Retrotec. Not sure how much of a “cyclocross” bike it is. But it’s cool.

(Those are 45c tires in the picture, though, not 40c #corrections)

Seraph, unless that kids bike is getting leaned over to the point the derailleur would contact the ground, it wouldn’t be a problem. I’m talking from experience.

I wasn’t referring to the bike shown as a cross bike.

anyone who looks at a cx bike as anything but a rigid 29er with drops is approaching the discipline from a “blinders on” perspective.

So many beautiful cross bikes at NAHBS, it’s a shame that a beach cruiser with an unpainted fork and through axles won “best cross bike”. Such a sad choice against some beautiful competition. If you want a real cross bike try Geekhouse, Avery County Cycles, Mosaic, Indy Fab, Festka, just to name a few.