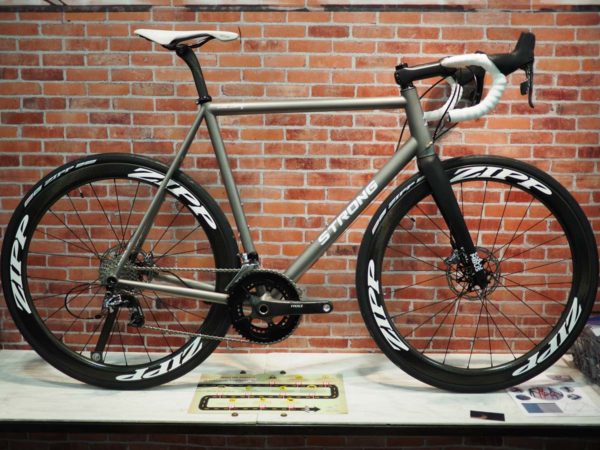 “The process of purchasing a [Carl Strong] is educational… There is a certain level of ownership in it. It isn’t just a bike that I build for them. We build it as a team, and that’s pretty cool.”

The Carl Strong framebuilding process, not unlike a Carl Strong bike itself, is a carefully optimized and distilled experience. After decades of building frames for himself and for a number of brands, Carl has understanding and producing the best and most appropriate product for his customers down to a science- so much so that he literally has a map to articulate this service to the customer in order to demystify the process. It really articulates the value in using Carl as a builder from a holistic standpoint, and makes it easy for even the most skeptical customer to dip their toe into the world of custom bikes.

Carl is really one of the stand-out characters of the small framebuilding community in his dedication to raising the bar of professionalism for this corner of the industry. Through mentoring other builders in refining and improving their customer service experiences or business practices, his name comes up frequently as a resource and a guide in discussions with the more prominent sect of builders in the US and the UK. 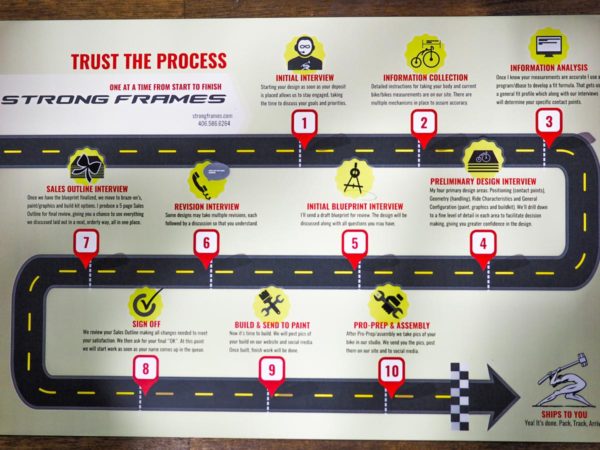 While the map is given, the secret ingredient is Carl’s expertise in, well, mind-reading. “You can’t ask people what they want because they won’t tell you. They are afraid to mislead you or send you down a wrong path.” The exploratory process involves a conversation, with direct and roundabout questions developed over thousands of customers to help Carl understand the unique product needs of that individual customer. The result? As a customer, you don’t have to know exactly what you want as a physical bicycle because Carl will work with you to understand the experience you’re looking for. “I feel like I’m a divining rod in a sense- but then… poof!” 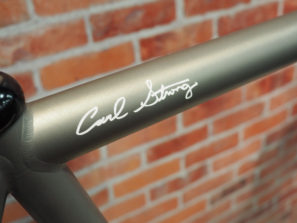 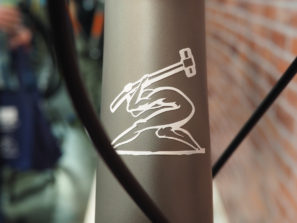 When I asked him how he applied these questions to the clean, prominently displayed titanium frame sitting center back of the booth, he replied that that was a personal frame- his first in some time. “I used to get a new bike annually,” but this was his first new bike in four years. “I wanted to do a road disc bike… I have a motorcycle background; I’m comfortable with disc brakes.”

The rear brake routing was through the downtube so it would not interfere with the branding. It features thru-axles front and rear for their contribution to performance. Otherwise, the frame is fairly straight forward- hand-shaped straight gauge top and down tubes for its dent resistance and cost. “I’m the most practical framebuilder there is… to a fault. I try to boil everything down to cost and benefit.”

“The thing I’m most excited about is how the tapered headtube looks with the fork. That’s what really turns me on.” The headtube features internal bearings to help keep things sleek and seamless on the front it. 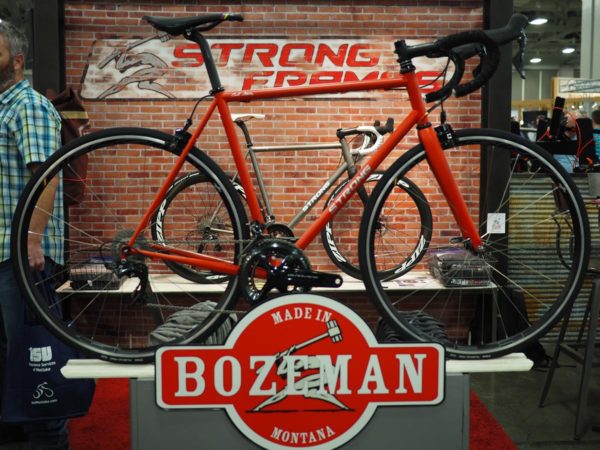 Customers not only seek out Carl for his process, but they often return. This particular steel frame, a material that represents about 10% of his current output, was built for a several times-over repeat customer. 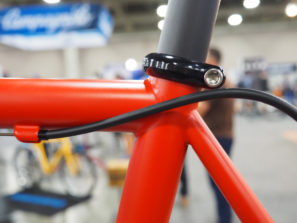 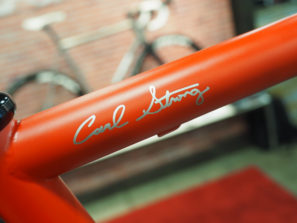 The top tube and down tube are True Temper OX Platinum. “Heat treated to that perfect balance of hardness and ductility. If it does dent, it doesn’t get a crack like other alloys.”

And as you talk to Carl, its evident that he’s always thinking for the long term relationship between customer and bike. “There are three priorities above weight. You have fit, you have feel, and you have durability.” 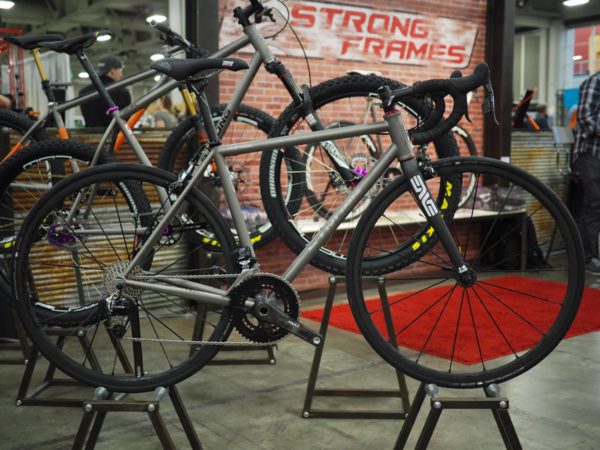 Last but probably most intriguing for me (given my interview with the Strong’s last year) was this tiny machine in the front of the booth, designed and made for Carl’s wife, Loretta. “She hasn’t ridden it yet. I can’t wait.” She has been riding the same heavy steel bike since 2000. The bike, I have noted, is 22 pounds.

The pair worked collaboratively on this project, as they do every day at Carl Strong, beginning to collect parts about a year ago. In Loretta’s case, she enjoys 20-40 mile rides at moderate paces and loves to “smell roses.” To accommodate her 5’2″ frame, the frame features a 1.0 Enve fork with 50mm of rake, a small diameter headtube. The petite build comes in at a slight 15lbs. 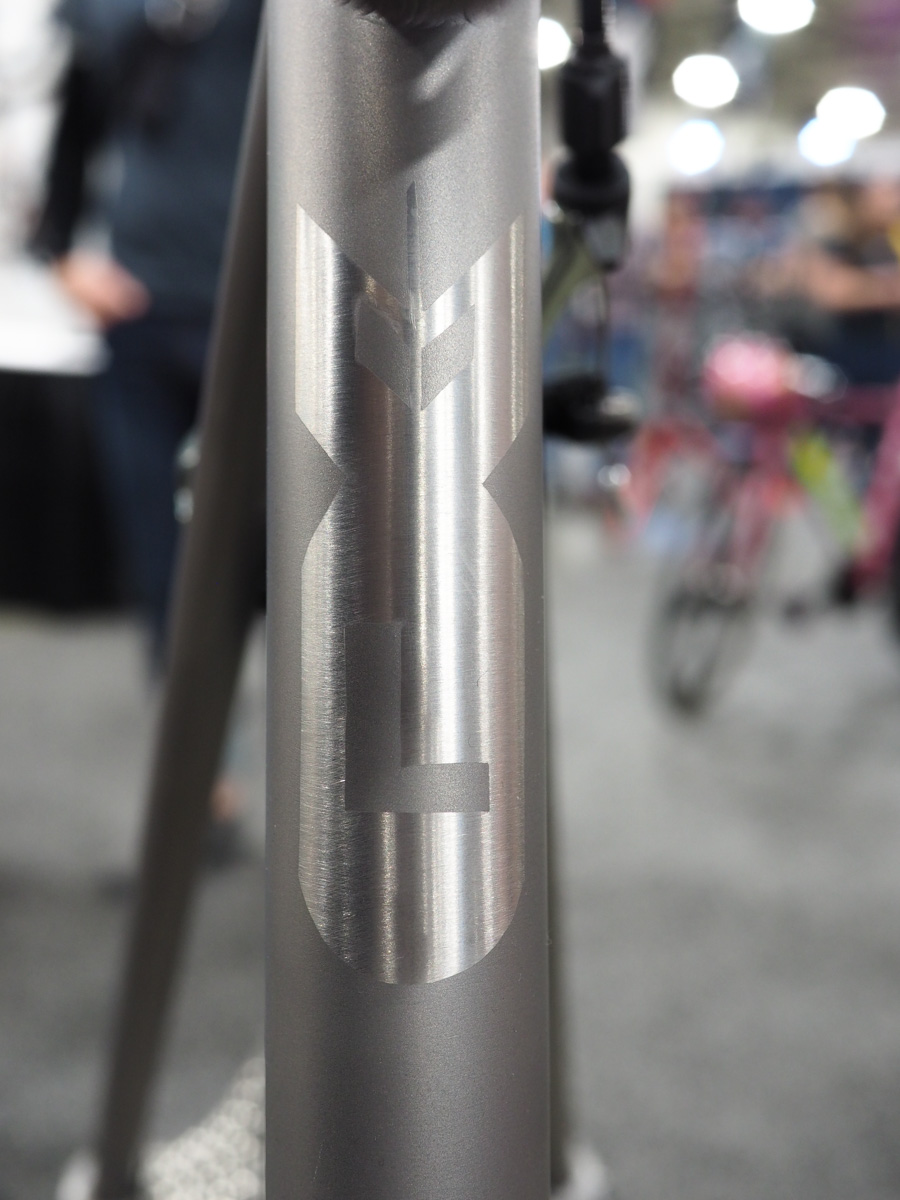 The only thing they did not collaborate on is the finish. “She does all the blasting. She won’t let anyone else do it because she doesn’t think they will pay enough attention to detail.” Loretta won’t even allow Carl to take a crack at the finish work.

Loretta added her “L-Bomb,” one created for her by a friend inspired by her audacious and exuberant personality.

his bikes are simple and gorgeous – my kind of builder.

Beautiful stuff. Glad to see this keeps working for him!

My Strong turns 9 this year. It remains my favorite bike.

My Strong is over a decade old. I’ve had Carl update it to disc brake compatibility and punch holes for Di2 routing, as well as scrub off the shifter cable mounts. It remains my favourite bike. I may buy another, which is completely unnecessary, but my wife is really asking me what I want for my birthday to commemorate another decade on earth… and honestly I don’t have much else to ask for!!