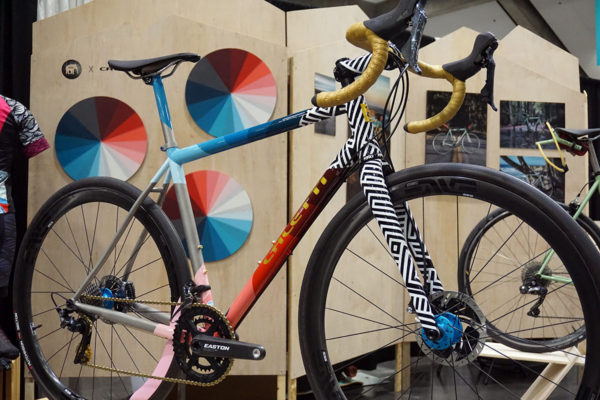 Caletti always impresses with his finishes for NAHBS, and this year’s no exception. The Santa Cruz, CA, based builder collaborated with artist Jeremiah Kille to design the paint for this titanium disc brake road bike. And then he did some fancy etching on a gravel bike, plus a little surprise… 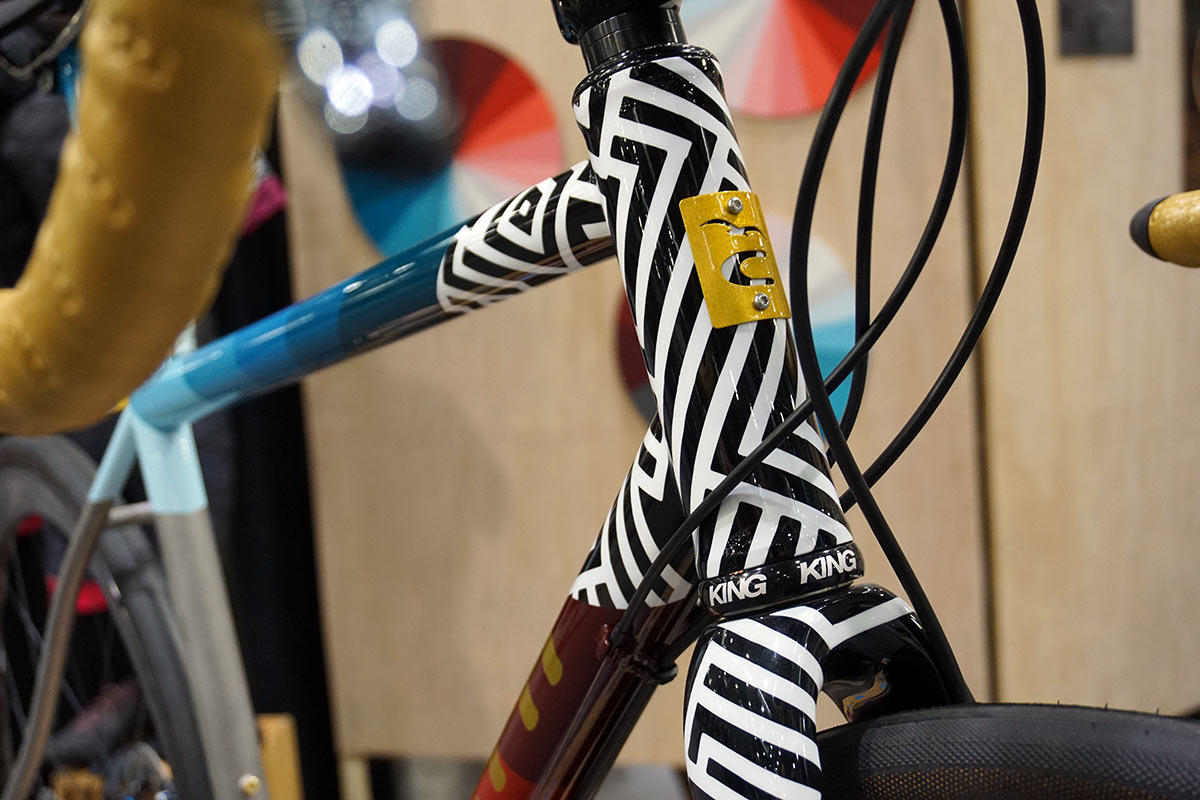 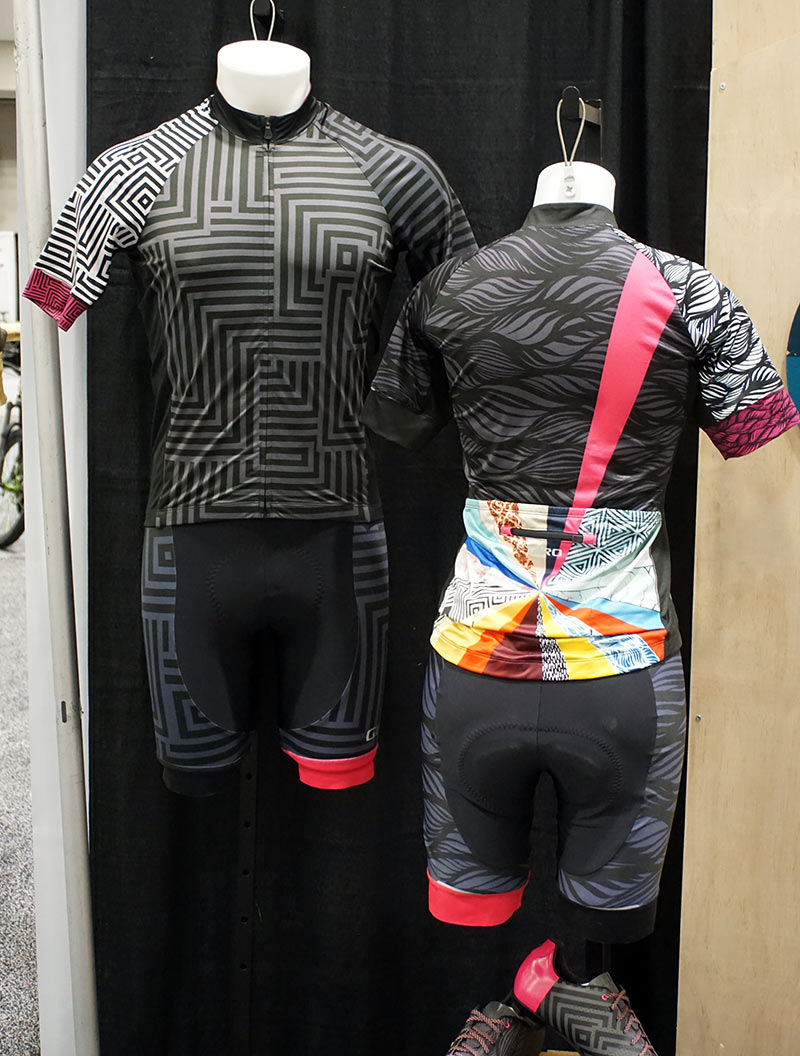 Check out a few more details on this kit and the matching shoes in Anna’s pre-NAHBS guide. It’s not the first time Caletti has collaborated with Kille…check out the award-winning bike from NAHBS 2016 that was hand painted by the artist. 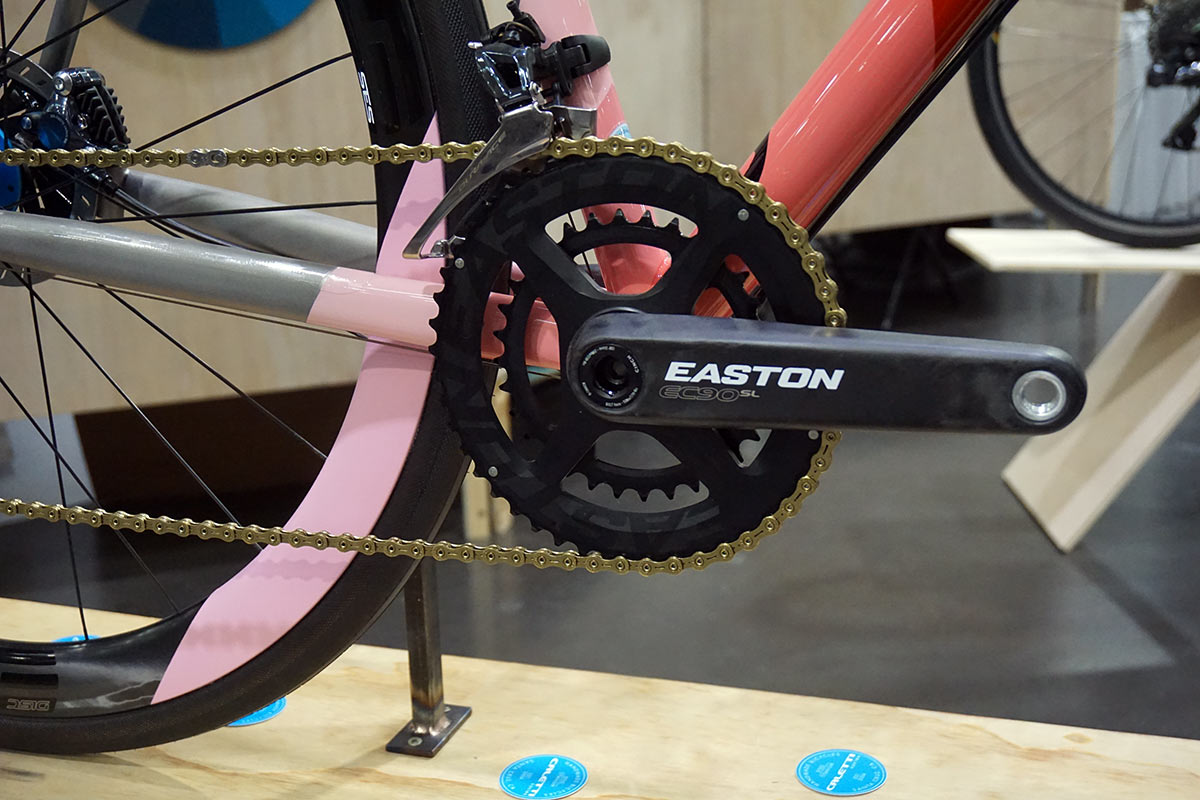 Subtle touches like the paint lining up on the frame and wheels are a nice touch. 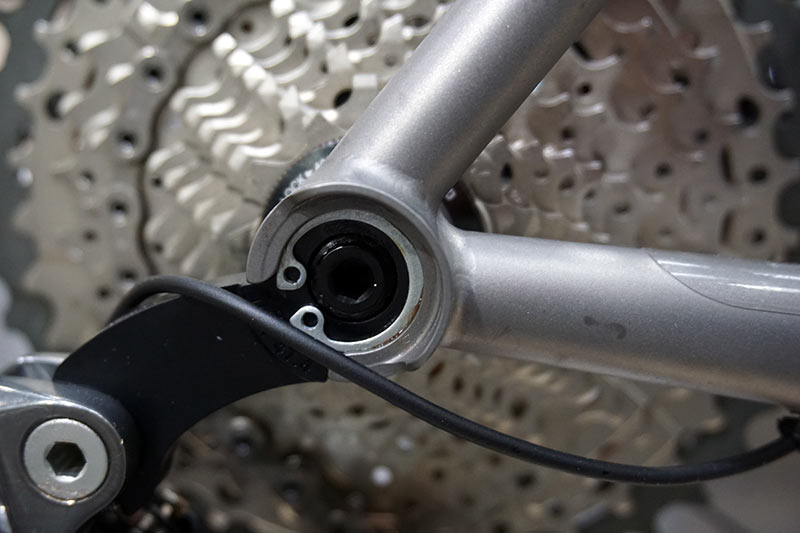 The bike itself isn’t an entirely new model, but it is using new Paragon dropouts that have a smaller form factor and use a C-clip to retain the derailleur hanger. That only keeps it from falling out when the wheel is removed…put that in and tighten the thru axle and everything’s secured for takeoff. 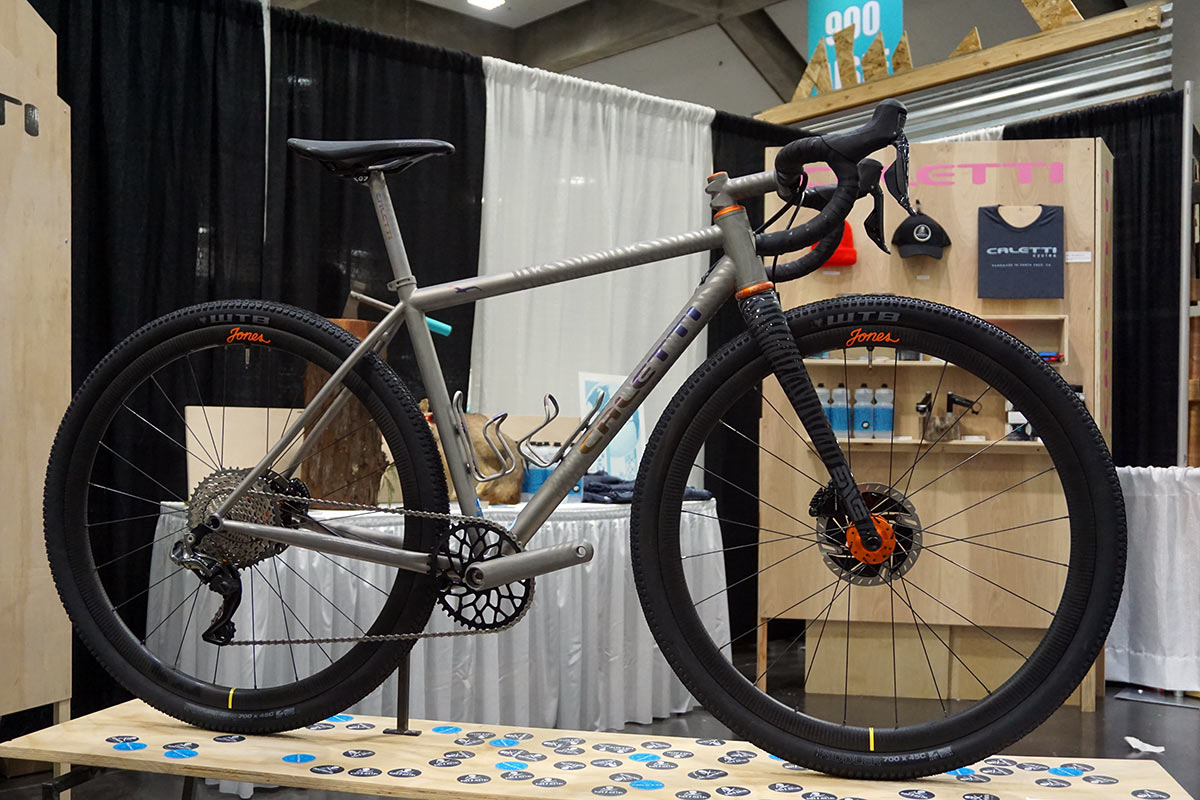 Hit titanium gravel bike received a tiger stripe etching with anodized downtube logo. What’s special about the etching is that it carries over onto the small parts that put the bike together: 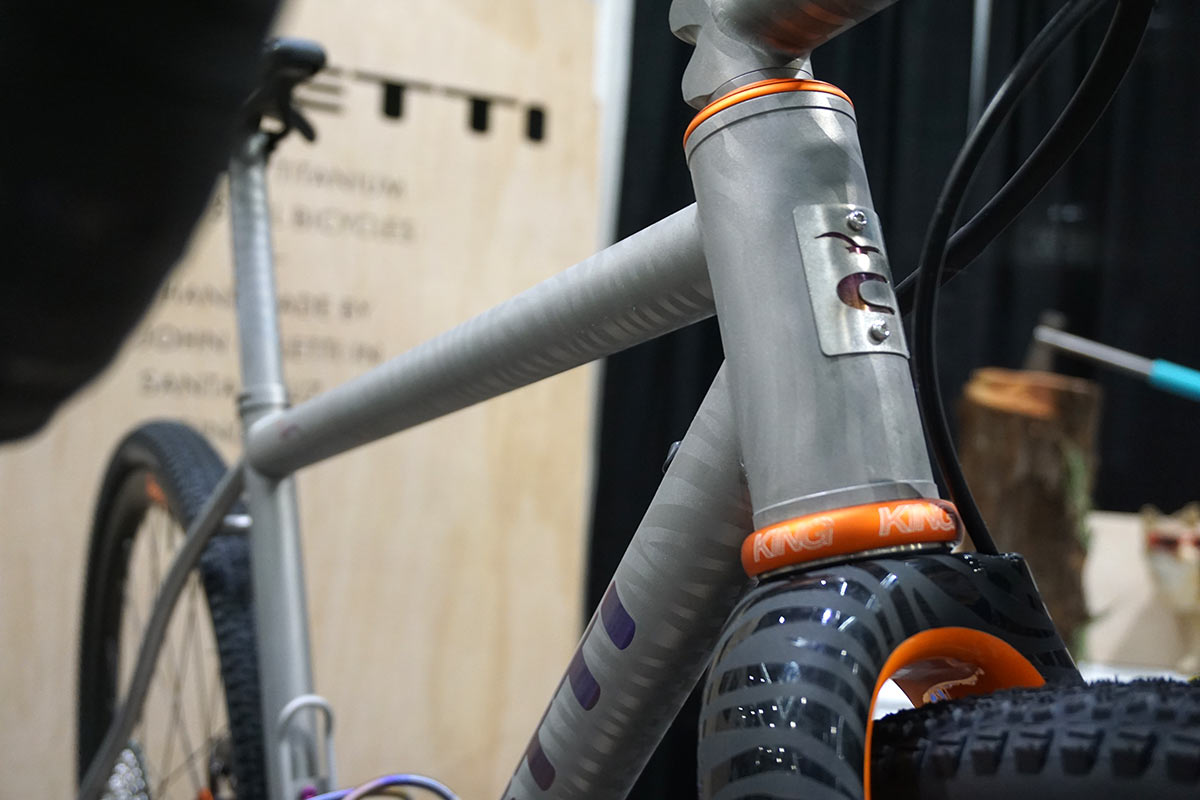 Gloss paint on the matte carbon fork continue the theme… 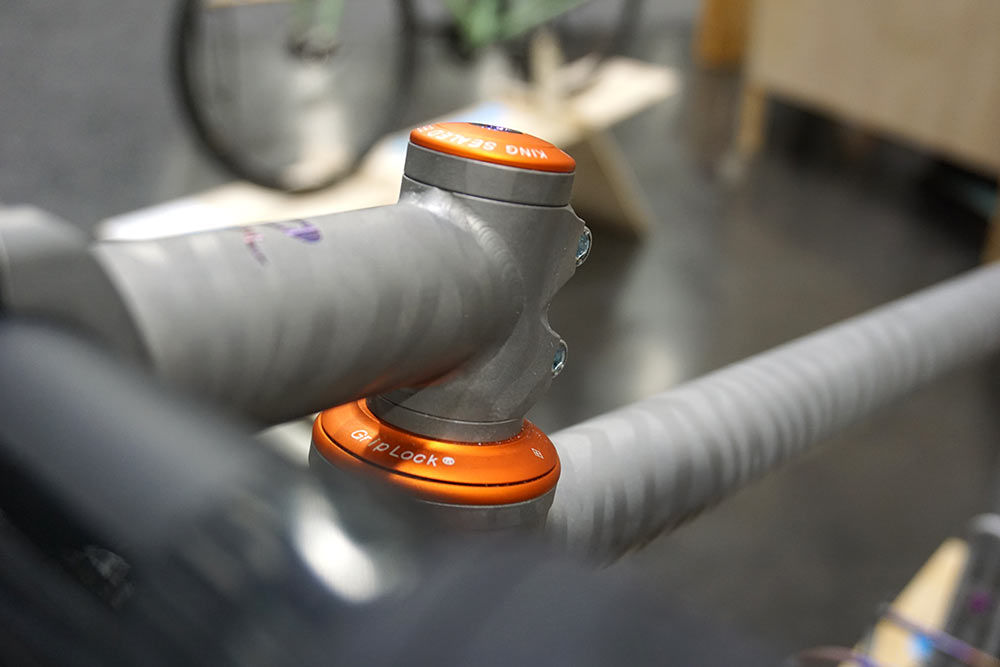 …and he even etched the headtube spacers…

…and titanium eeCranks. It’s the little things. Like this: 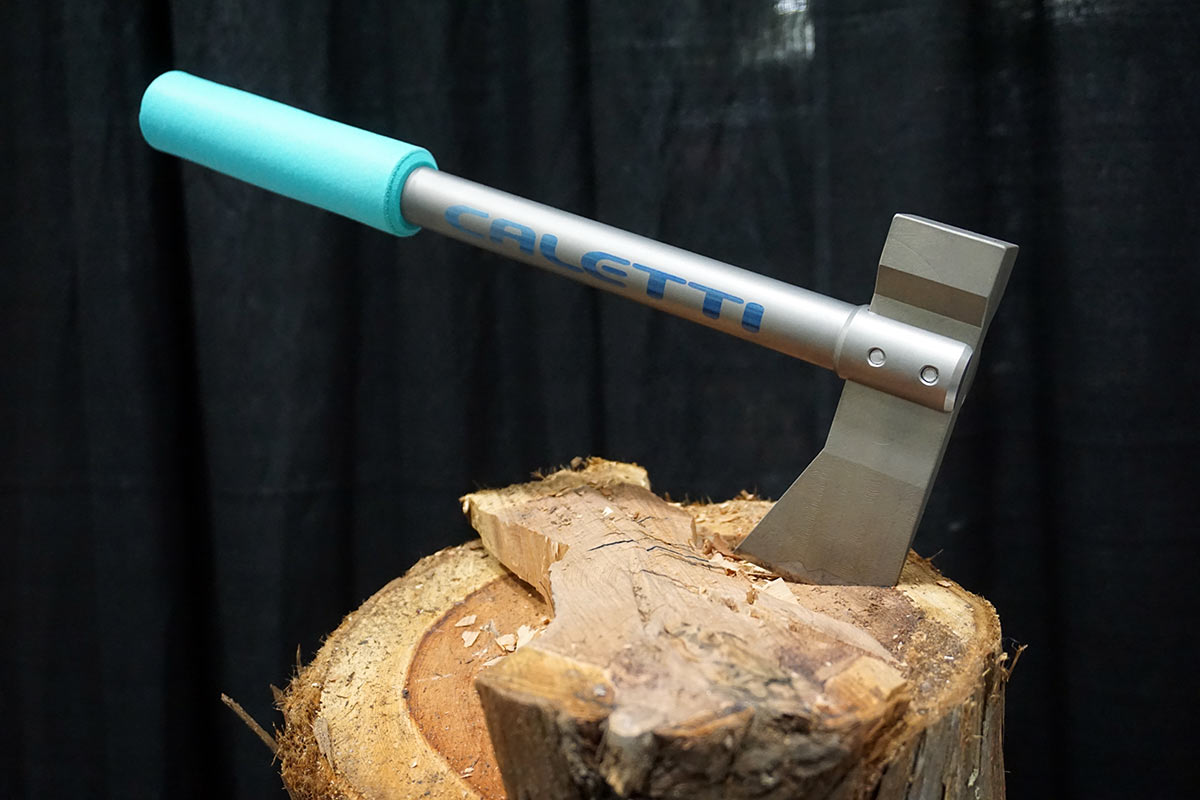 A couple years ago, it was titanium sling shots that he wouldn’t make. Now, John taunts us with this handmade titanium axe with ESI foam grip. Which he says was really hard to make, with the blade unit taking forever to form. So he will not make any more. And you probably don’t want to pay what he’d charge for this one. But daaaaang do we want it.

Wanna chance to win a Caletti bike? Check out the campaign for Mountain Bikers of Santa Cruz here.

Ax heads are supposed to be heavy, so I’ll stick with steel. Why do you want that ax? Do you use one often? Broke the one (or two or three) you already own?