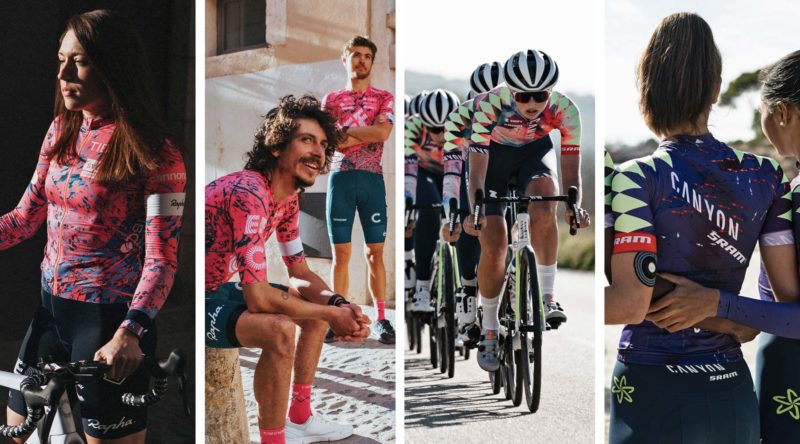 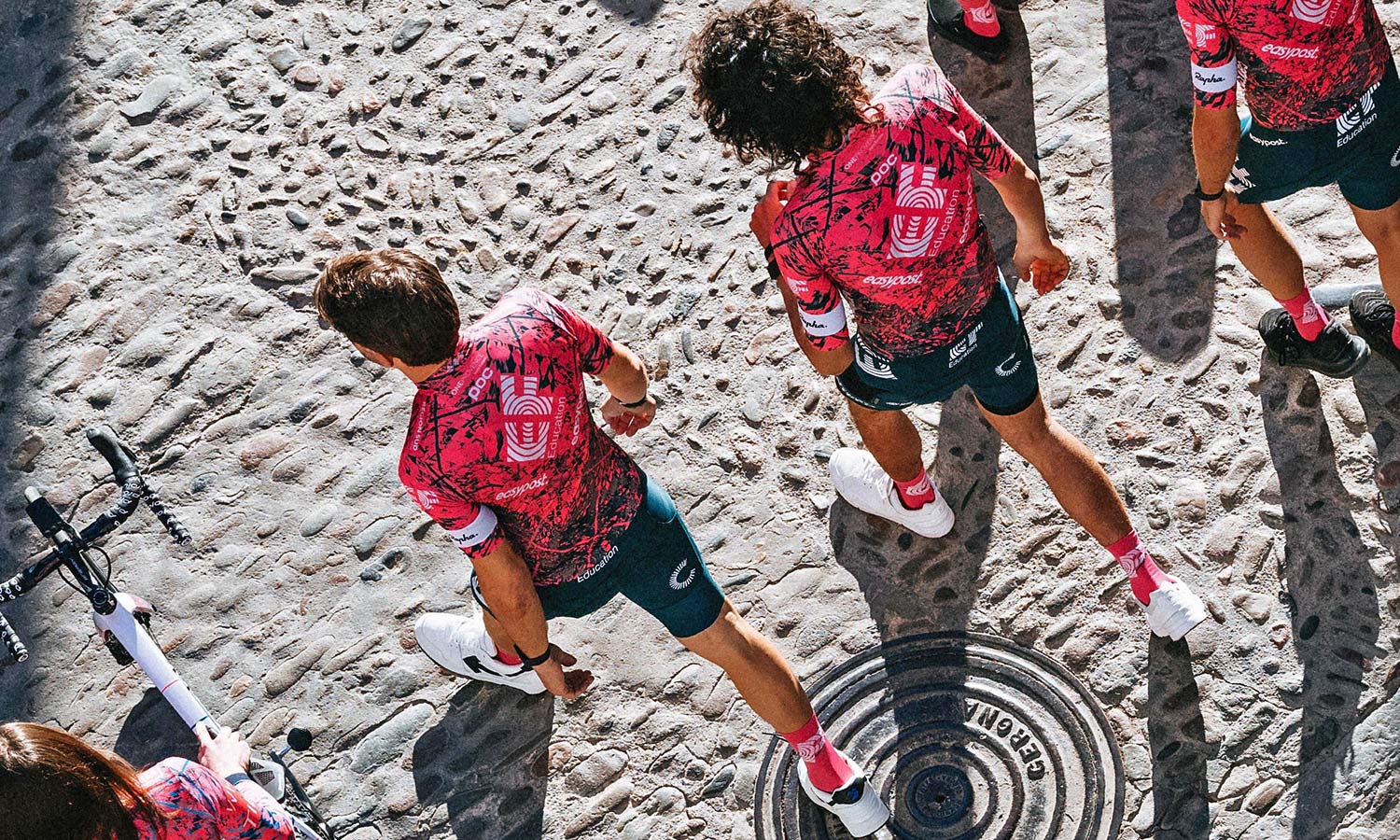 Keeping track of which is riding what cycling kit isn’t usually the most technically newsworthy story out there. But Rapha has often been one of a few companies making it easy for cycling fans to ride in the same premium Pro Team kit the pros race in, and offer replica kit at both pro & casual performance levels. 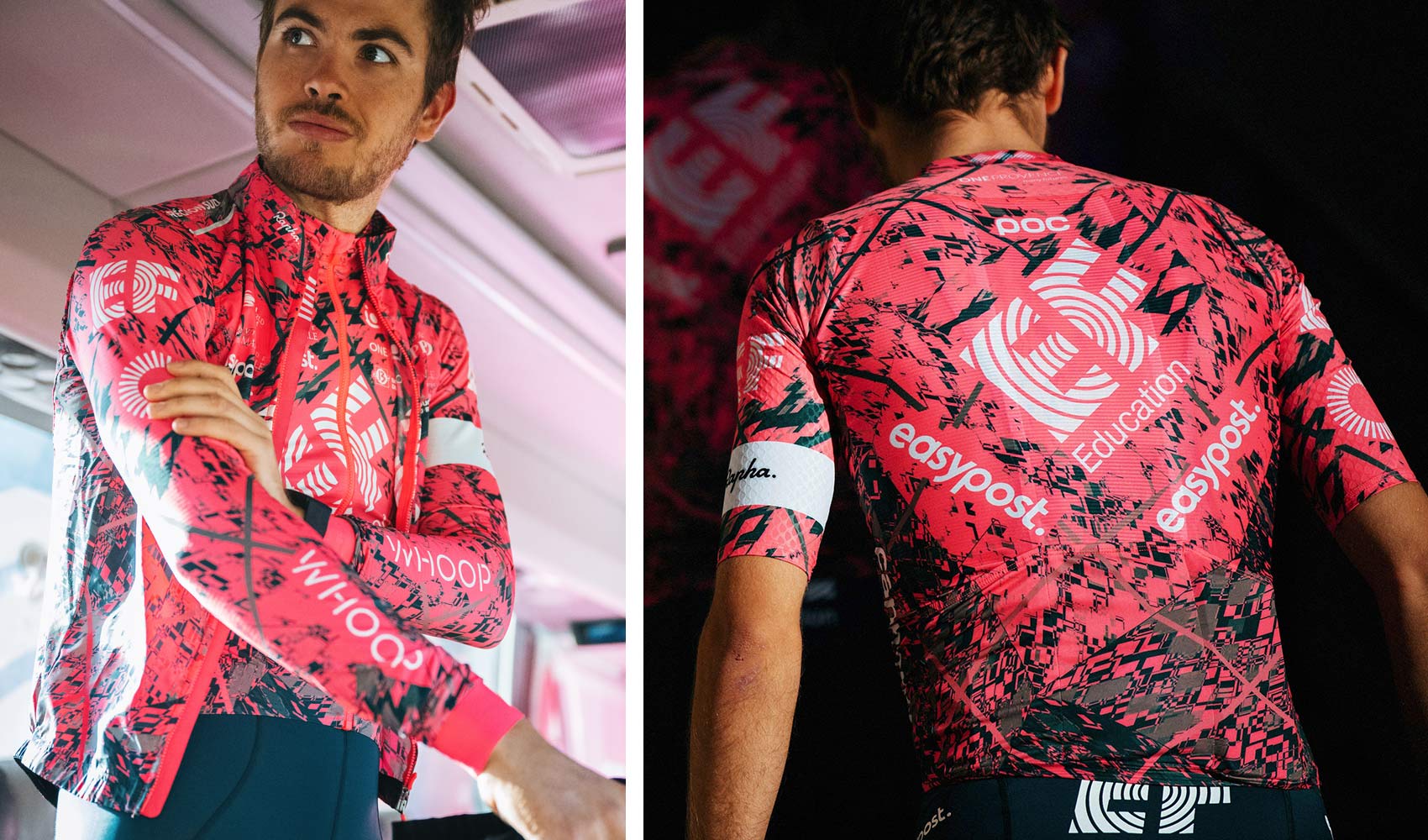 For 2022 the EF Pro Cycling men’s team – now named EF Education-EasyPost – gets a new patterned pink Rapha kit said to be designed with creative coding and image/pattern manipulation. The result is something of a gradient design with a background of geometric shapes and a hint of argyle patterns peeking through. 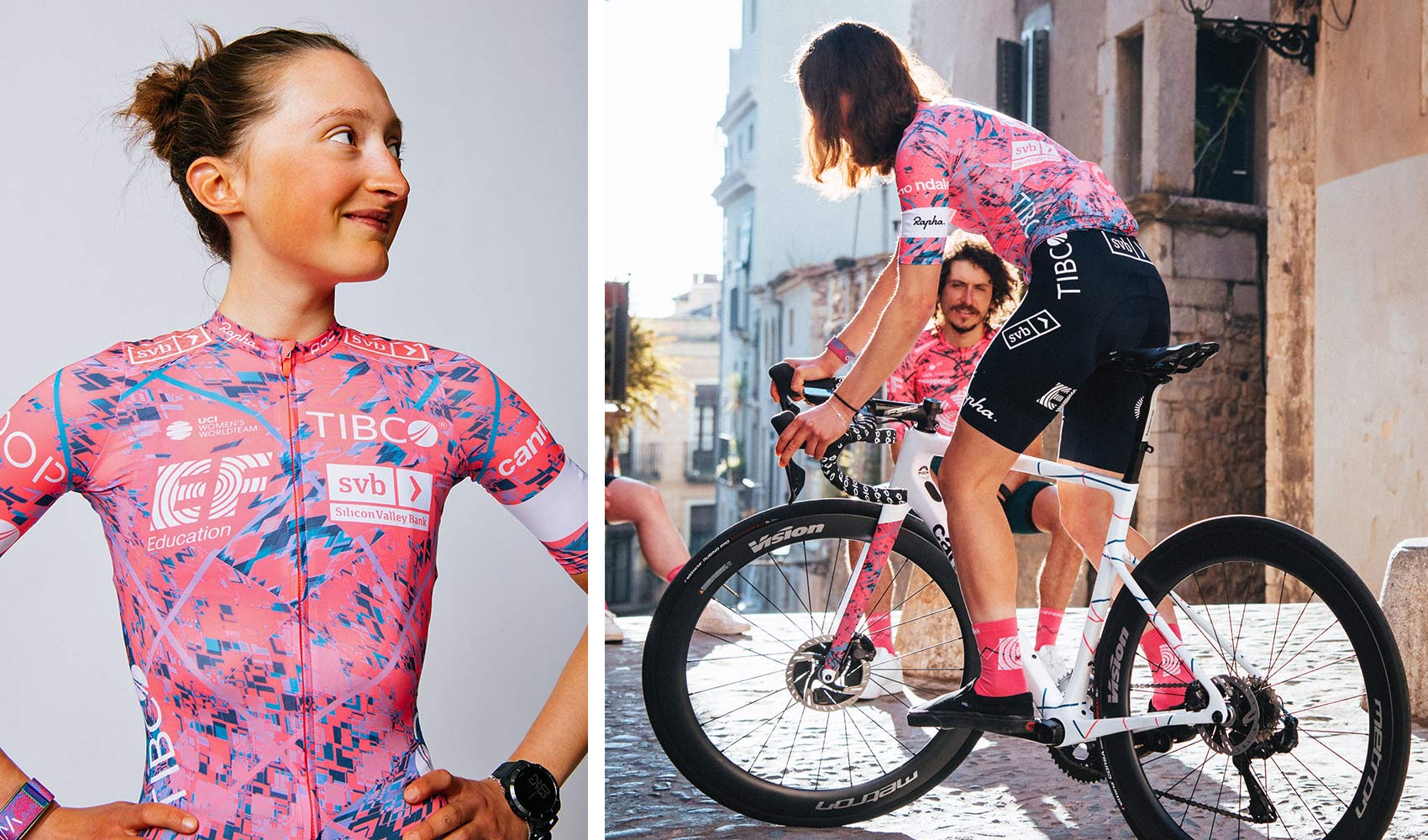 This season, the long-running US Team Tibco-SVB joins the EF family as they step up to the World Tour, redubbed EF Education-TIBCO-SVB with their own EF Rapha pink overhaul as well. While the men look to have a black or dark navy under the pink, the new women’s kit is the same design, but with a more colorful lighter blue & navy contrast. 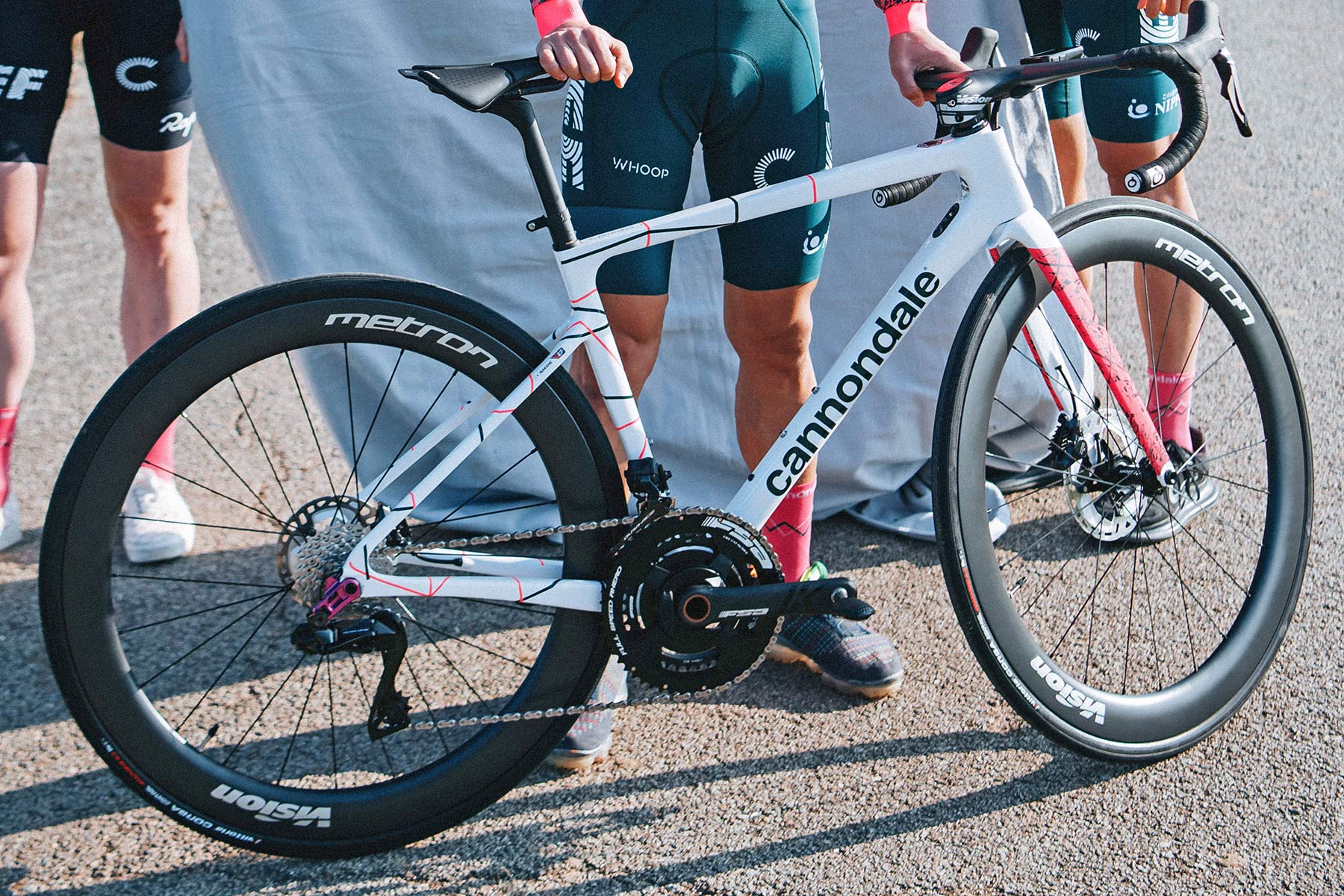 The EF Tibco  SVB team are also already riding a new set of custom-painted white Cannondale SuperSixes to match their new kit (while the guys look like they are still training on last season’s navy Cannondales.) 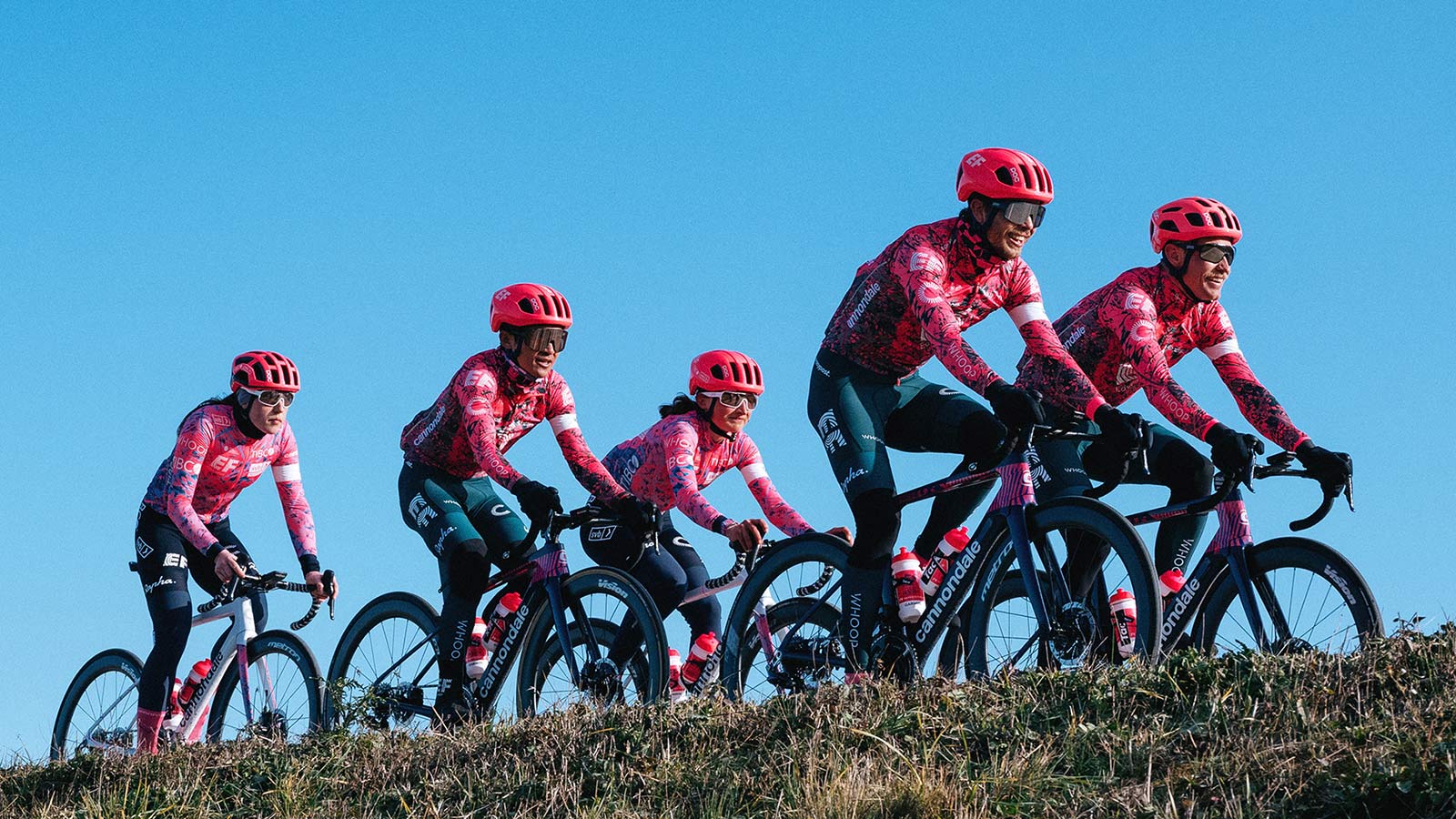 The new EF Education designs haven’t yet made it into the Rapha Pro Team offering, but we expect to see replicas become available to consumers as the racing season gets underway. 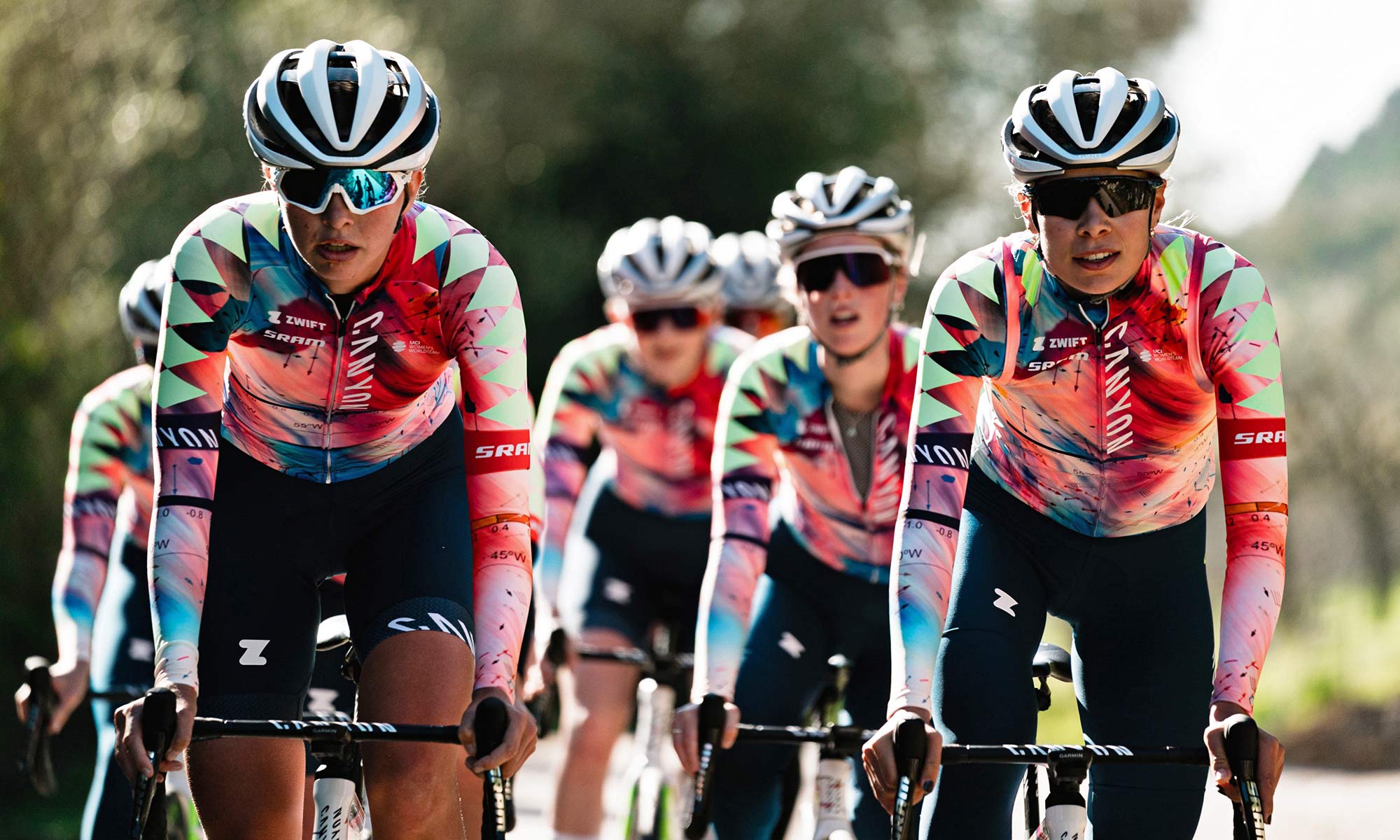 From another perspective, women’s cycling’s Canyon//SRAM team has moved away from Rapha kit for the first time since 2015, with an all-new look and new kit supplied by their title bike sponsor. With a colorful new design inspired by weather maps and featuring distinctive green diamonds across the leading edge, the team calls the new kit the “latest generation of Canyon high-performance apparel”. 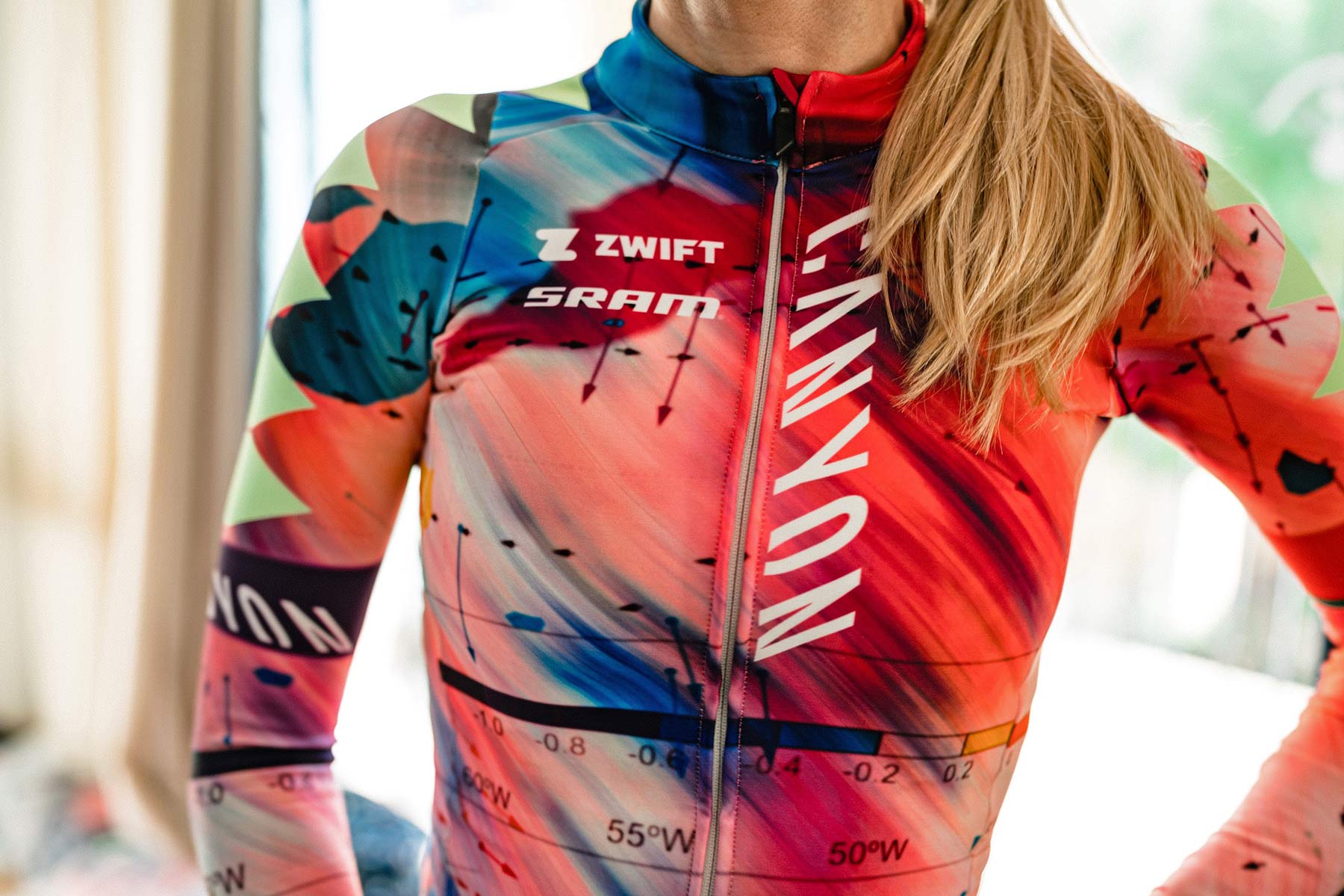 The new kit was again designed by Ultan Coyle, the original designer of that first Canyon//SRAM  kit, now titled Astral Burn. “The print comprises nature’s meteorological displays and their associated human interpretations. The ambition of the print is to capture this phenomenal energy and imbue the athletes that wear it with this sense of power. In addition to this, diamonds were added to specific parts of the design to provide a counter to the visual chaos and serve as flashes to catch the eye.”  – Coyle 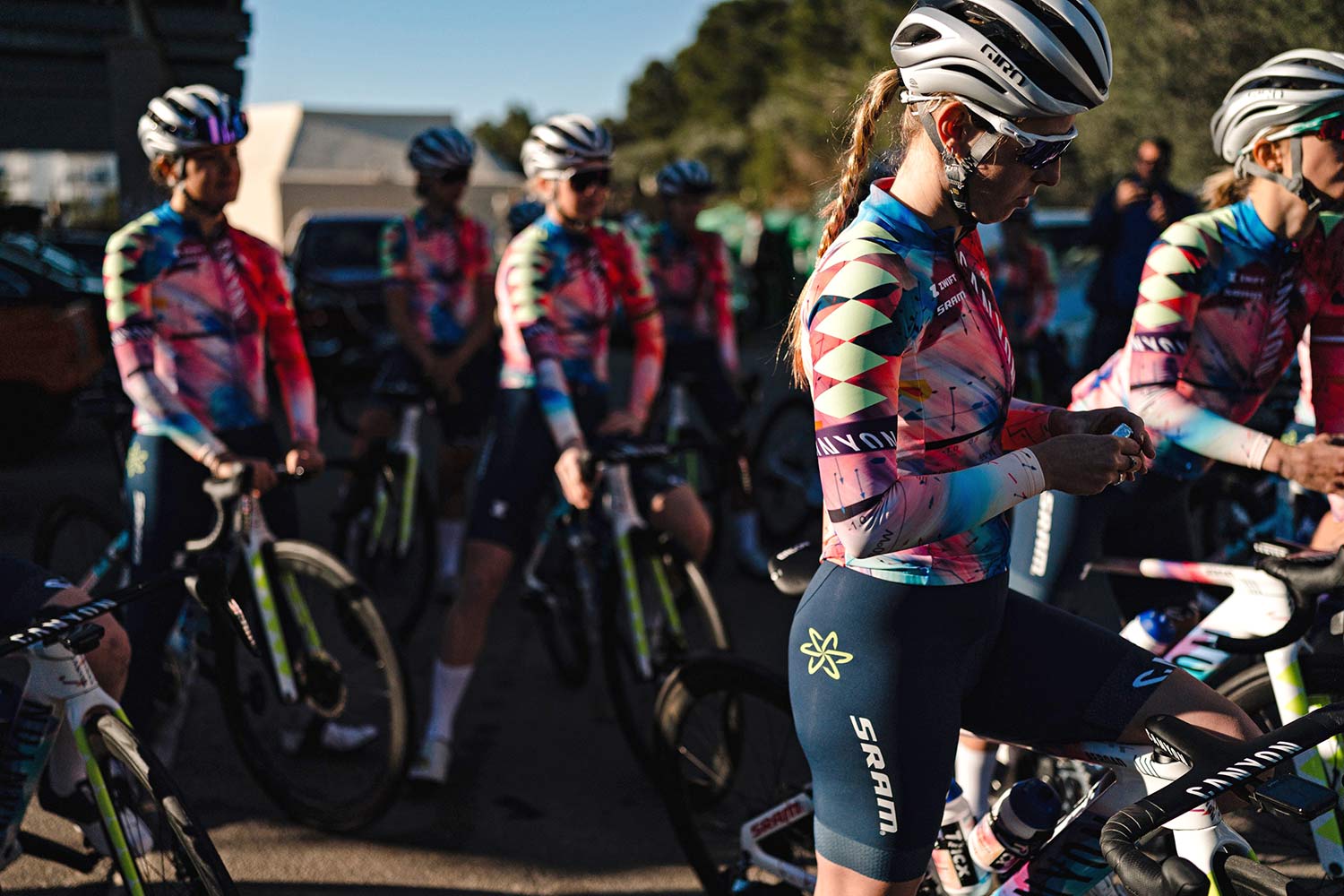 Canyon founder Roman Arnold called it a “major step” to provide pro-level racing kit for the team, in addition to their bikes. Canyon aims to take advantage of partnership with the team to further develop their premium kit, beyond the limited racing gear currently in the Canyon store, some of which has been produced with Sportful in the past. No word yet when pro-level kit or team replicas may be available to Canyon//SRAM fans. 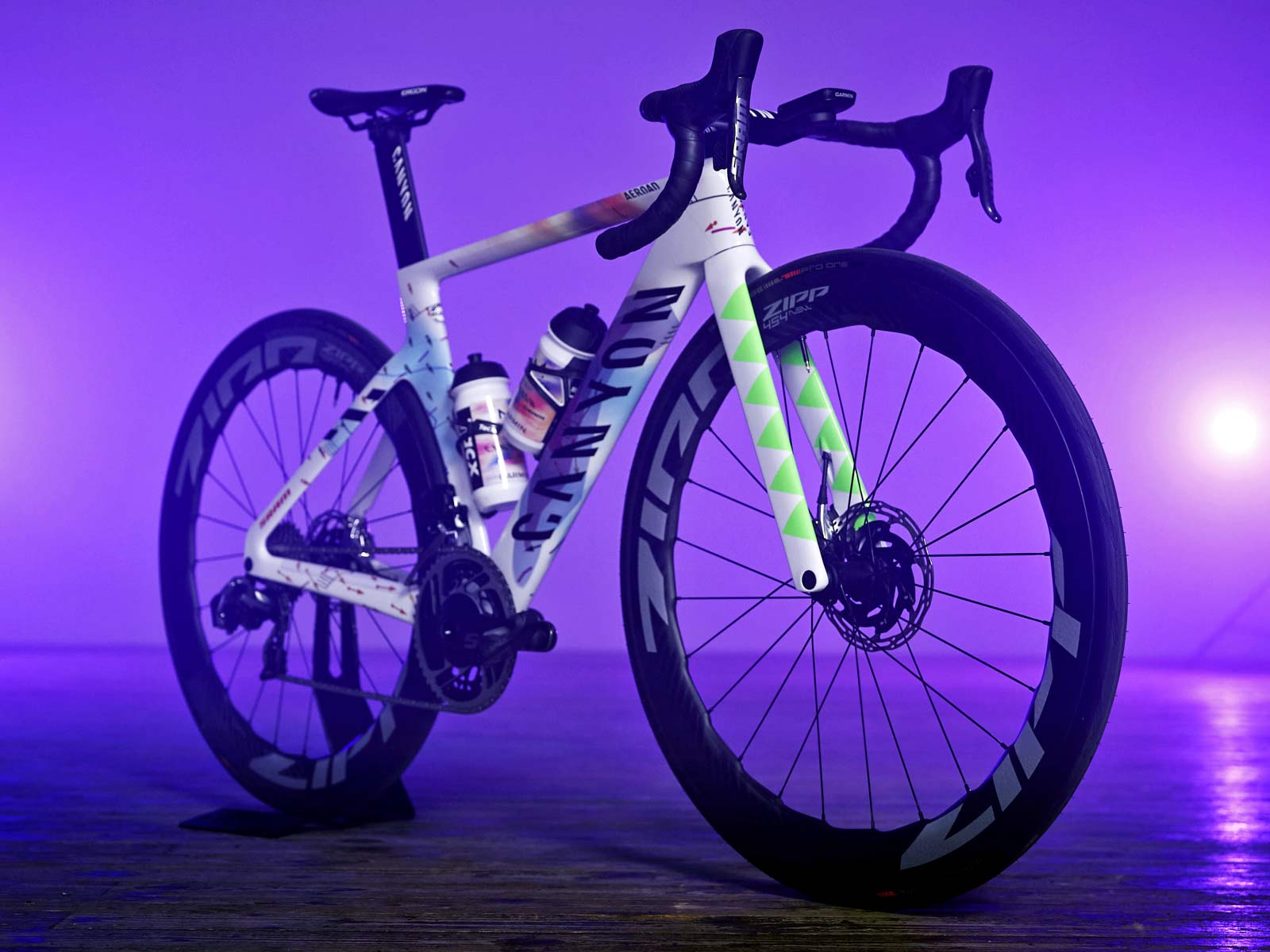 In the meantime, the team does also get some brightly-painted Canyon Aeroad CFR race bikes to match their new kit. 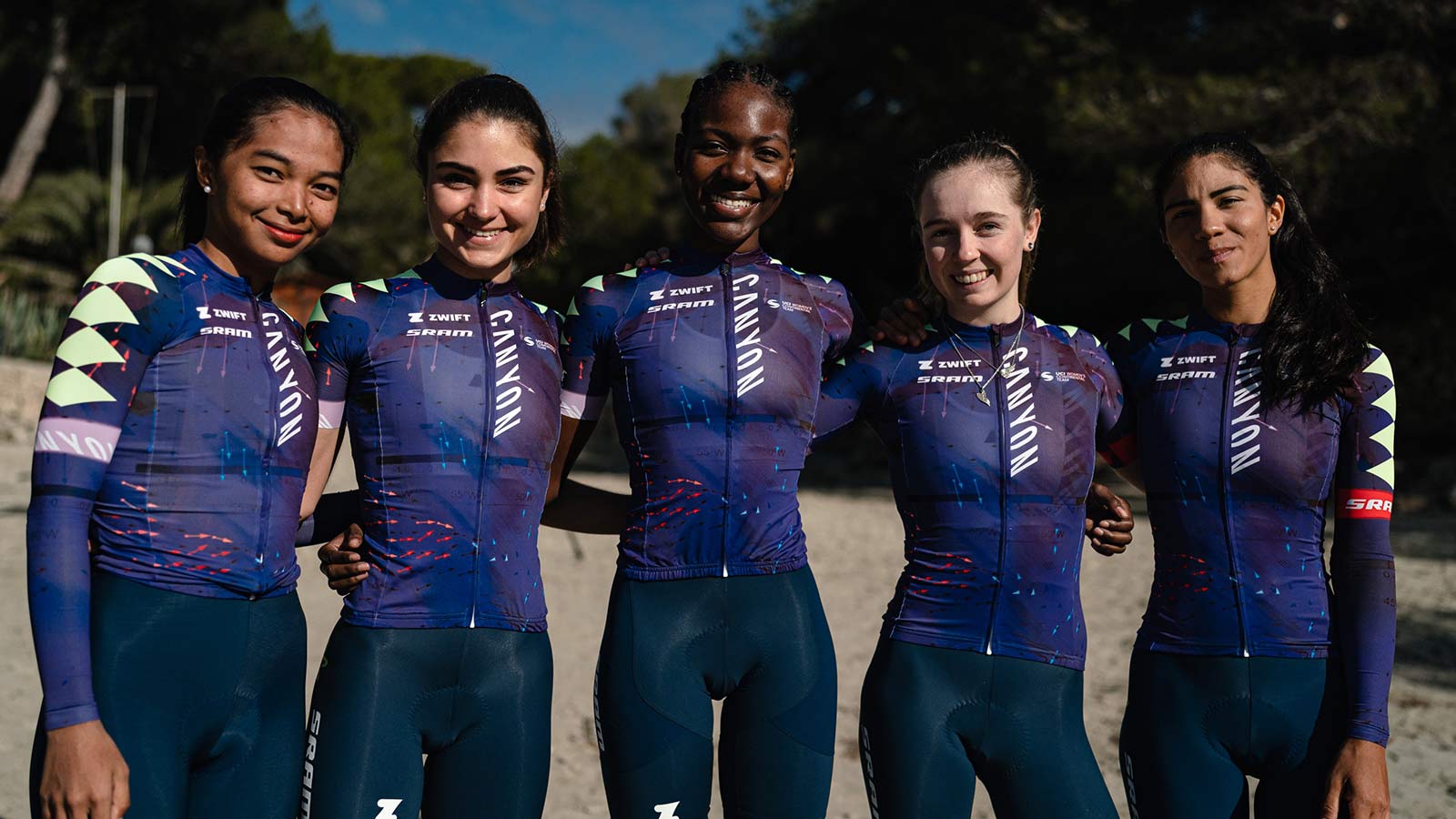 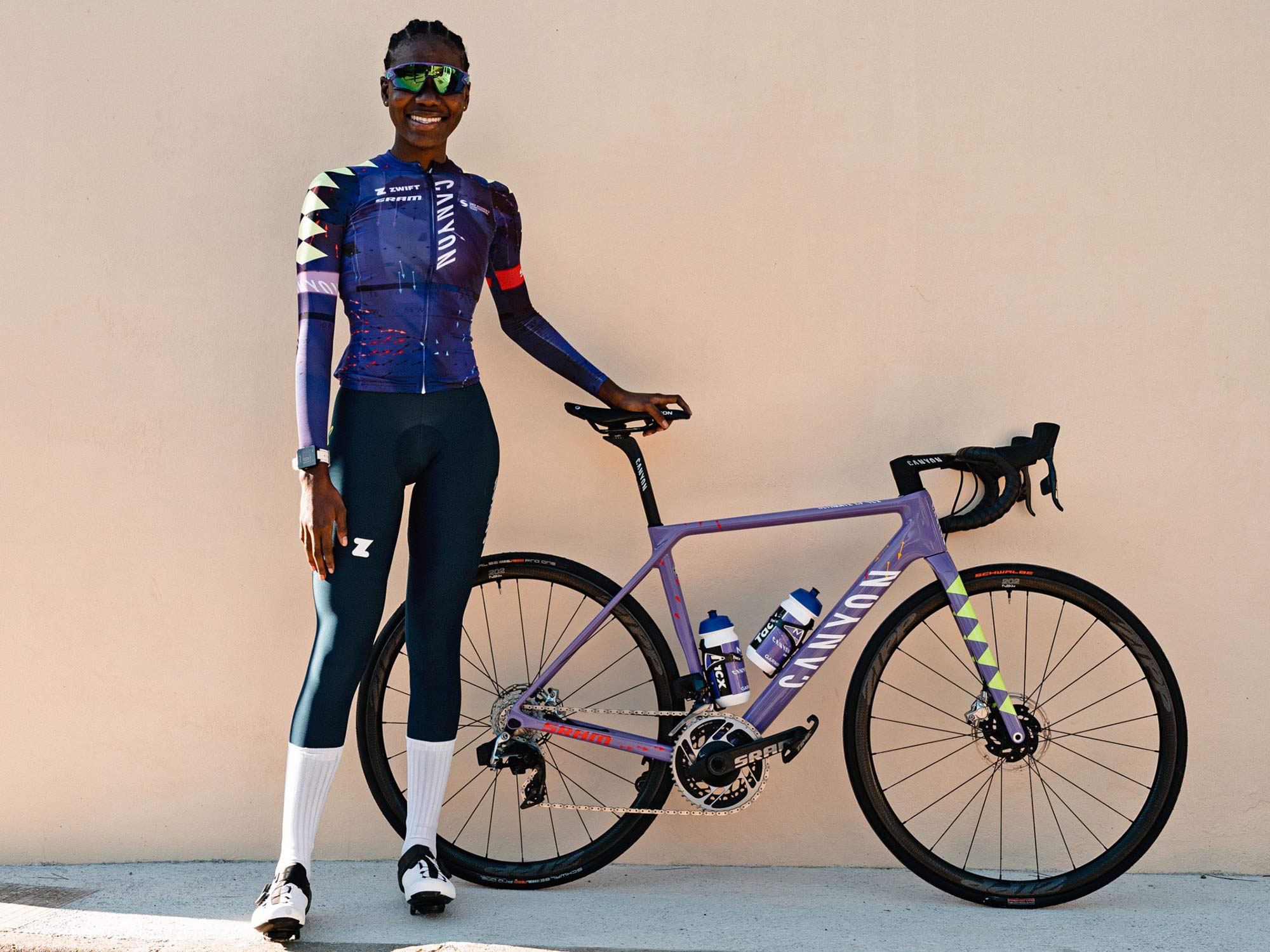 Since last summer, 239 riders from 62 nations applied for a spot on the new development team. Those selected, aged 18-26, hail from 7 different countries across 4 continents to join the German-registered Conti team, and will ride the same top-tier bikes as the World Tour team

Love the Canyon/SRAM and Generation kits. The EF Education Easy Post kit — not so much. EF Education TIBCO SVB is my least favourite of the bunch.

Lovely kit, but don’t understand why Canyon bothers with promotional gear, when they haven’t had much more than a handful of bikes – at least the desirable ones – to sell for at least a year.