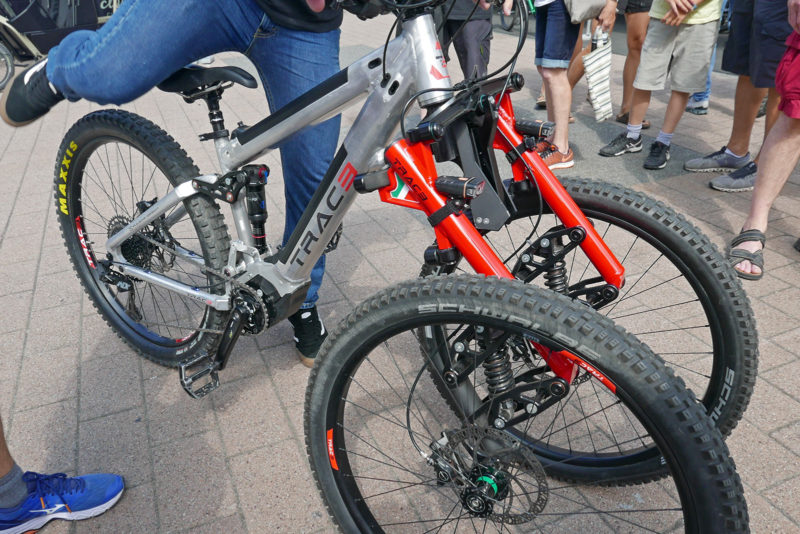 To no one’s real surprise, it was eBikes that stole the show at Eurobike this year. And, they were some of the wildest we’ve seen yet, especially the hub-less Komo concept bike that you should definitely check out. While none are quite so outside-the-box as that, there were also more than a couple eMTBs that definitely made us look twice. Here we have the essential details on eleven of the more interesting new off-road eBikes from Eurobike 2022.

Conventional and Wild eBikes of Eurobike 2022 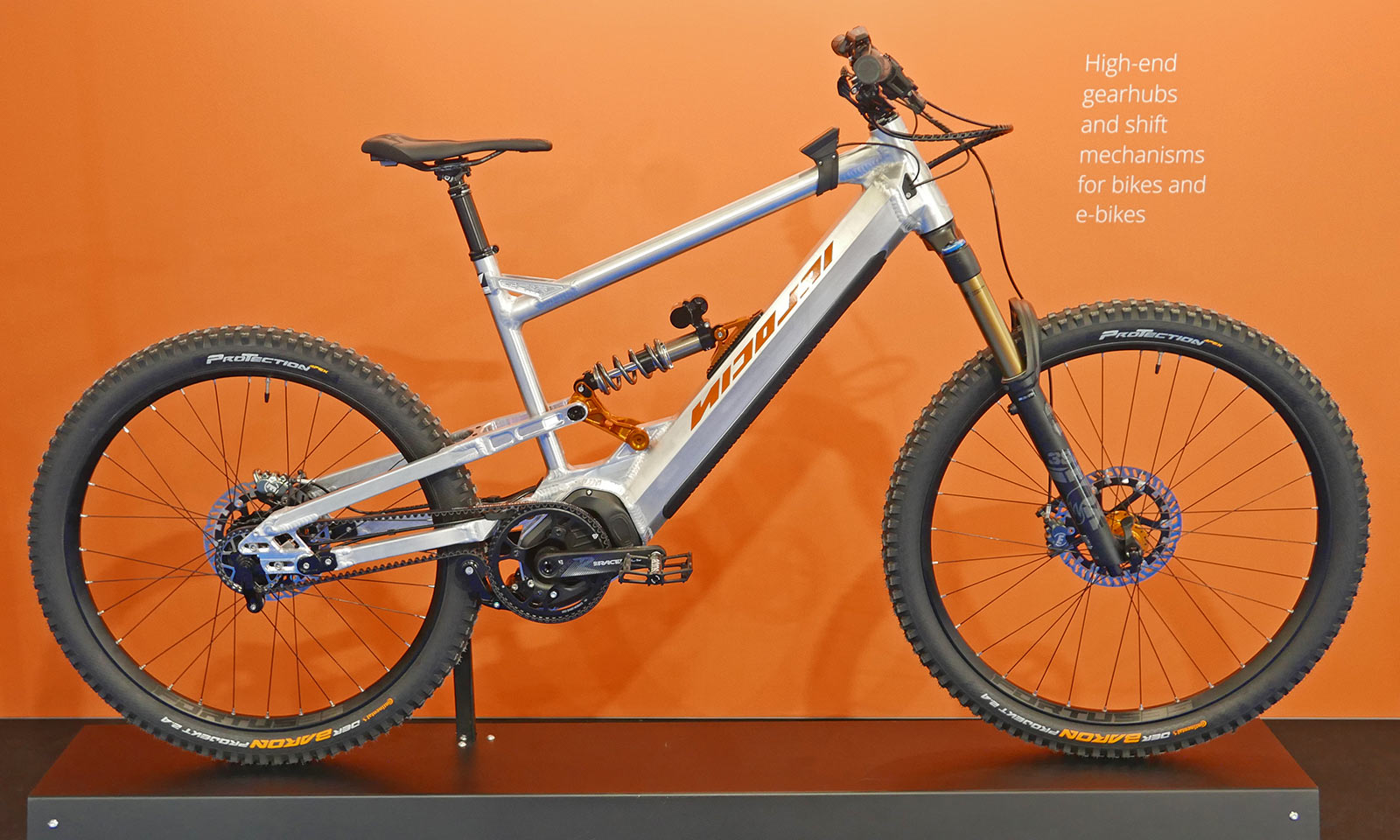 Nicolai was probably the most visited booth at Eurobike this year, but not because of the G1 EBOXX you see before you. The star attraction was their Nucleon 16 high-pivot mountain bike, primarily because it is the first production bike to run the Lal Bikes Supre Drive. That bike did sort of eclipse the rest of Nicolai’s range, which is a shame because they definitely had some other cool bikes, too.

The latest Nicolai G1 EBOXX also has an alternative drivetrain. The Bosch motor provides assistance through a Gates Carbon Drive, something Nicolai are rather familiar with, but on this bike it is linked up to an Internal Gear Hub from Kindernay. The current production versions of this eBike run the Rohloff Speedhub, a 14-speed gear hub with a 526% range. The Kindernay XIV trumps that with the same number of gears but a slightly wider range of 543%. And yes, it too runs a 12mm thru-axle. 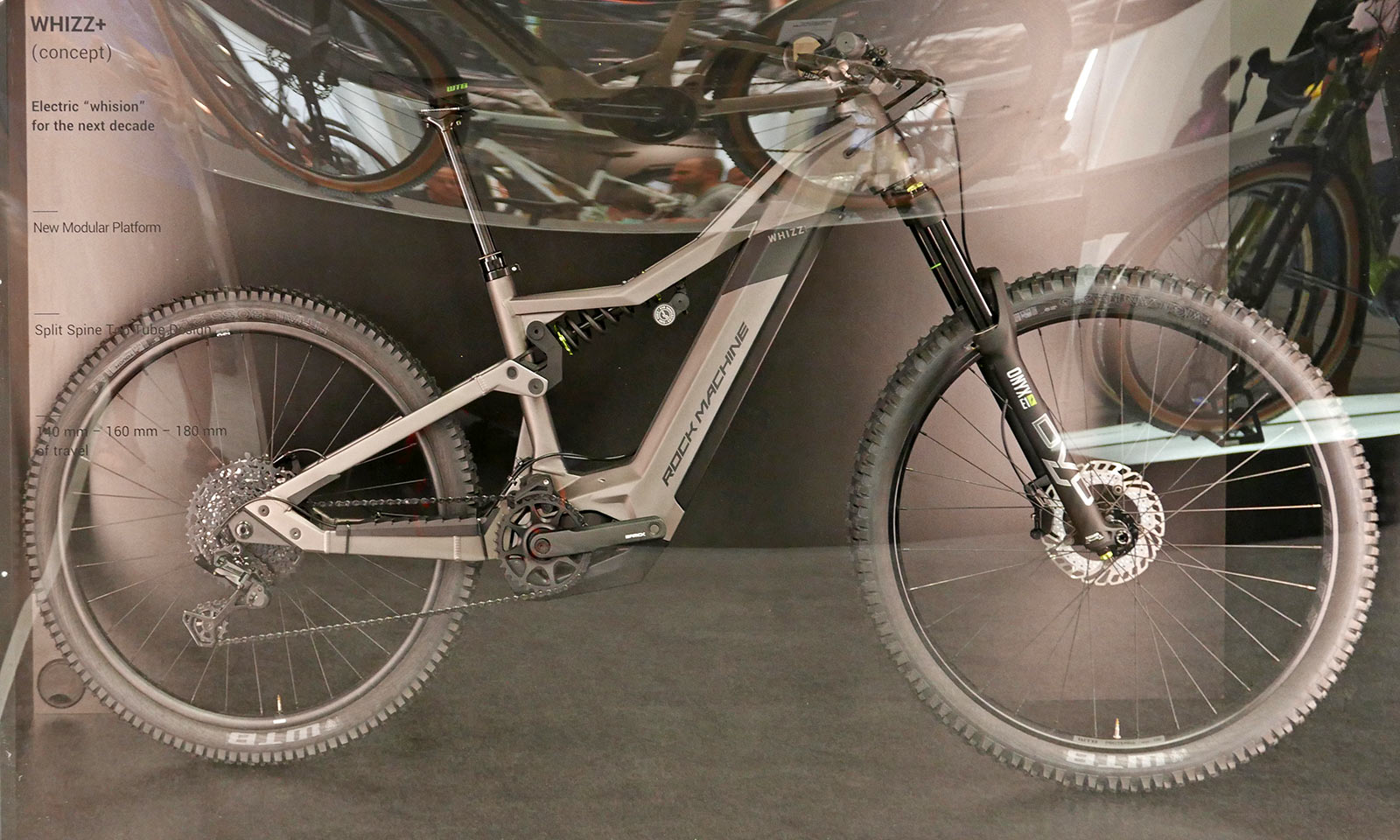 This is a 3D-Printed prototype made from plastic

Czech brand, Rock Machine, were showing their “Whision” for the future of eBikes; the Whizz+ eMTB, still under prototyping. It has a Split Top Tube, with the shock mounted between the two struts. Below, you can see the three different positions for that upper shock mount, which allows the bike to run 140mm, 160mm, or 180mm of rear wheel travel, in full 29″ or a mullet configuration. 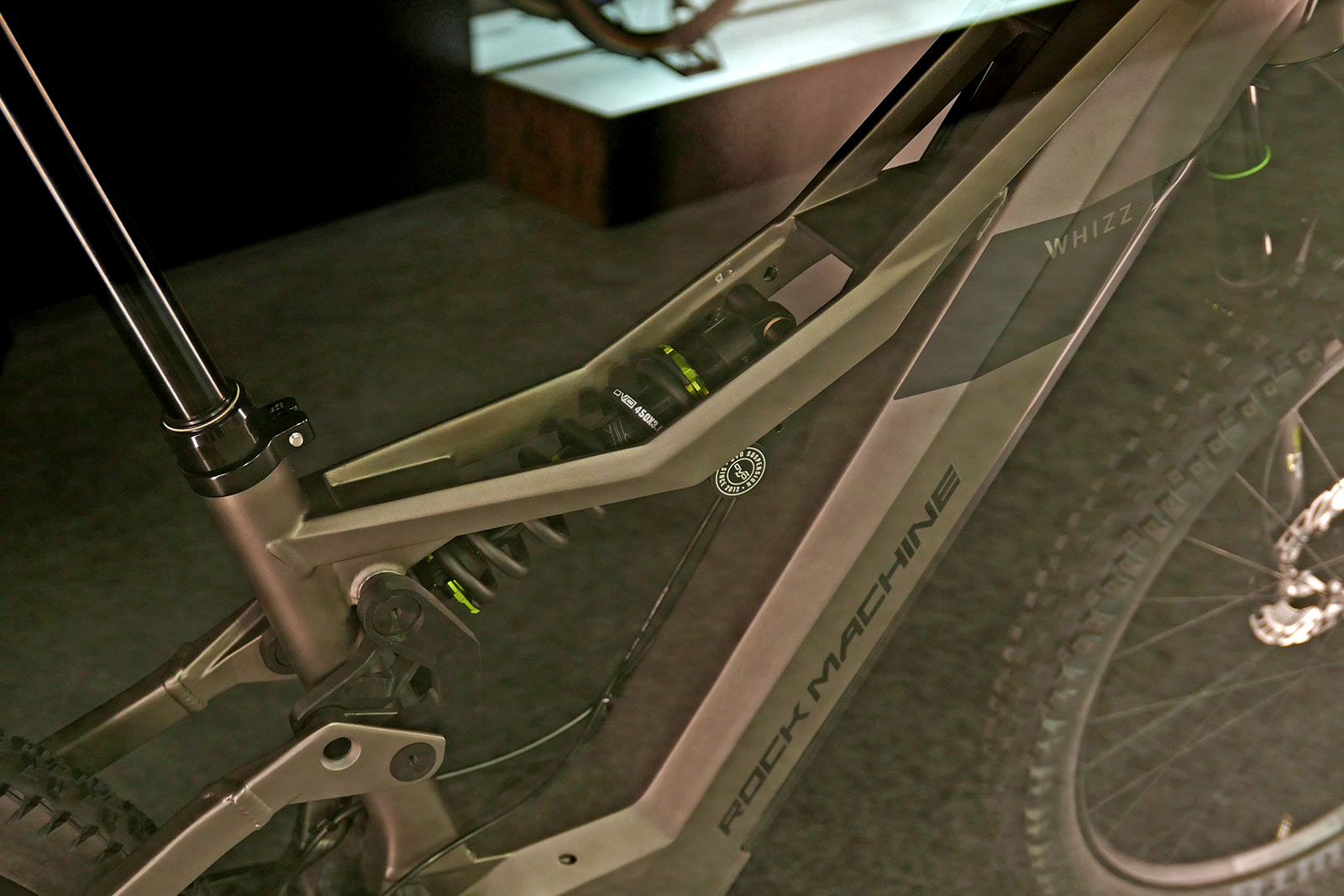 Yes, they even printed fake welds to make it look like aluminum 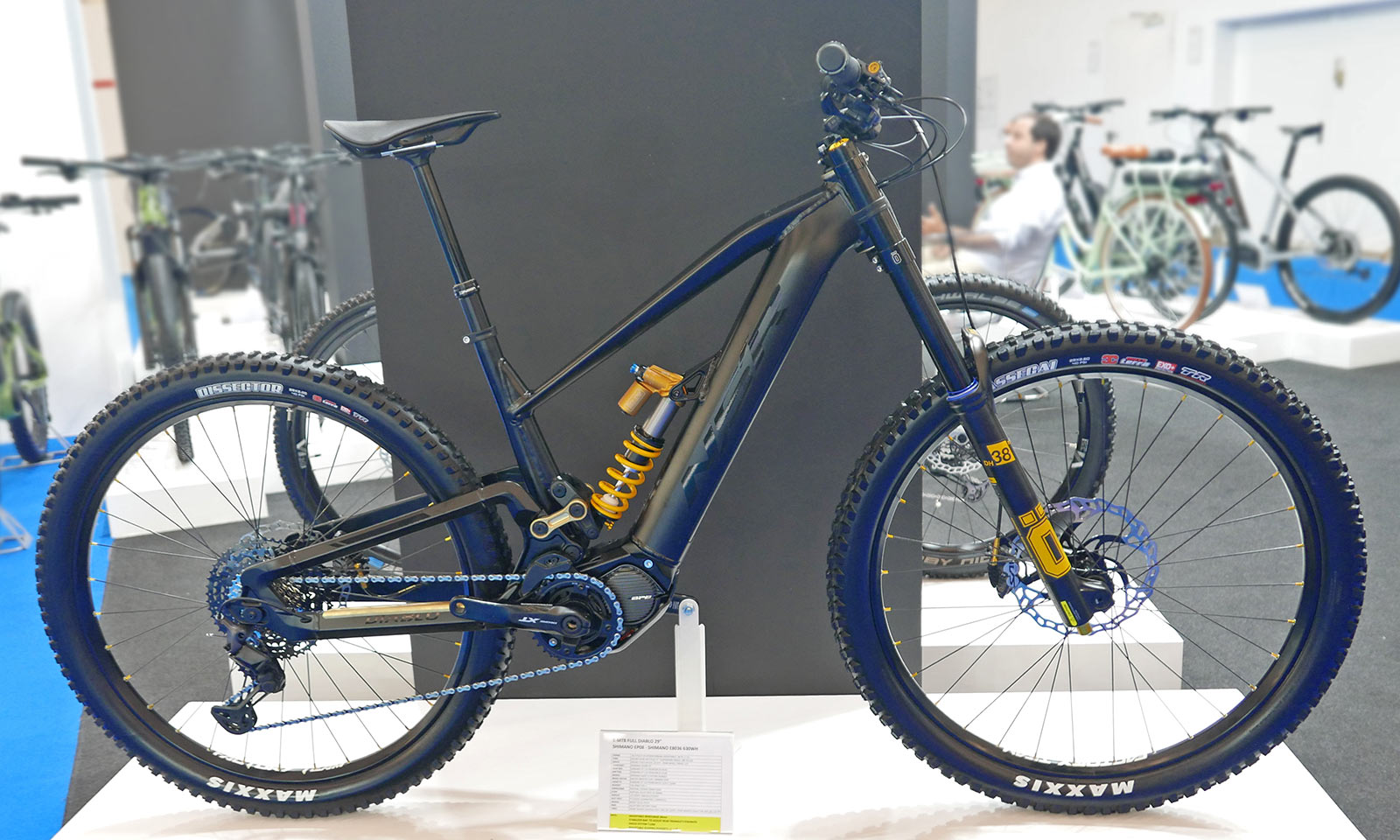 Italian brand, NSR Technobike, perhaps better known for their step-thru city bikes, had this 175mm travel 29″ enduro eMTB on display. The Diablo takes a dual-crown fork, has an aluminum frame, and is home to a Shimano EP8 motor. The wheelbase can be adjusted through 30mm with use of a flip-chip at the drop outs, and an angleset that permits up to 1.5° of head angle adjustment. 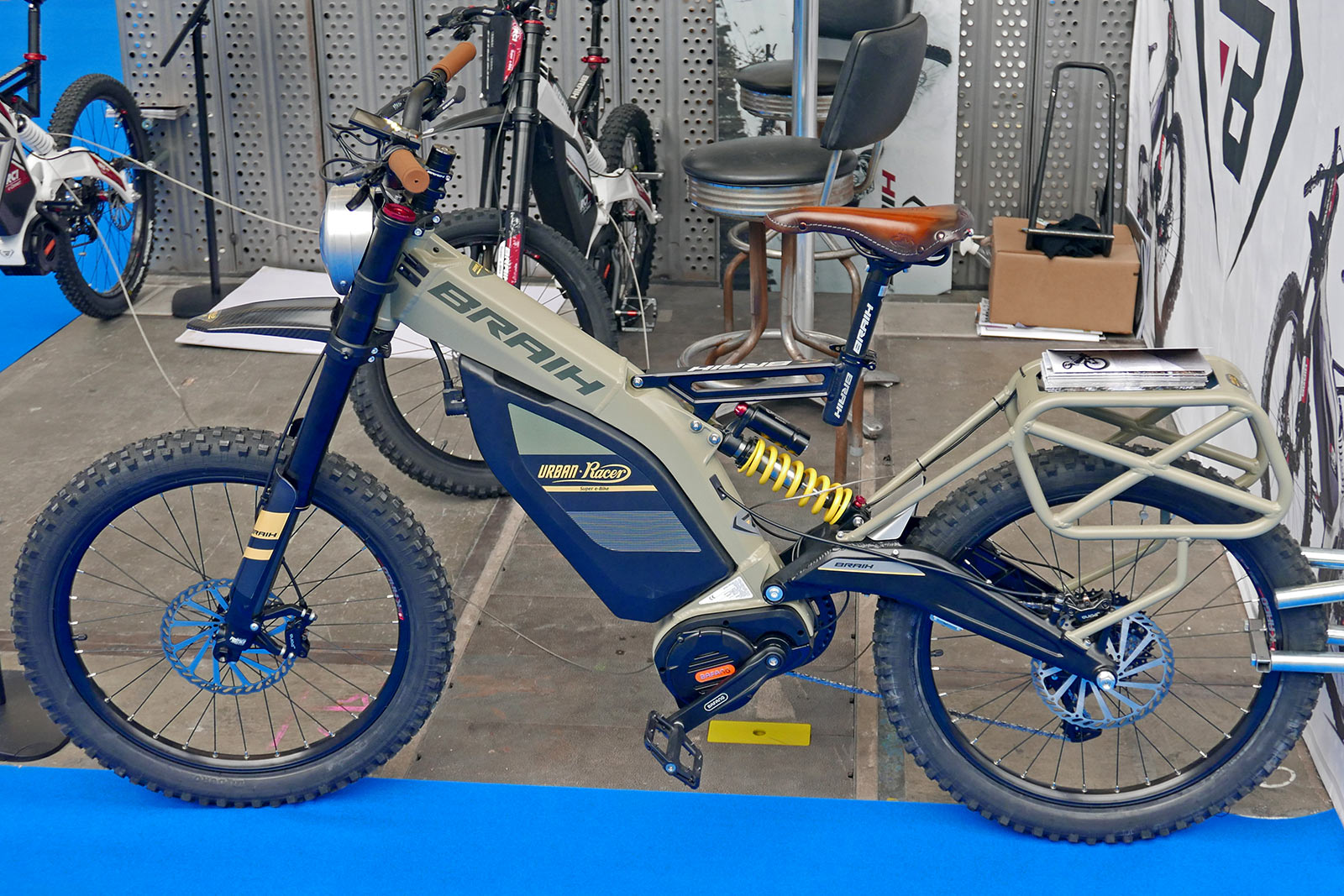 The Braih Super eBike has 175mm rear wheel travel. The white one in the background that lacks a rear rack boasts 185mm.

Combining the capacity to make pizza deliveries and ride Double Black Diamond DH trails is the Braih RC1 250 Urban Racer eBike. This single-pivot super eBike complete with split seat tube and rear rack runs a Bafang motor and rolls on 24″ wheels with 3.0″ tires. It also looks to have Braih’s proprietary suspension, including a dual-crown inverted fork. 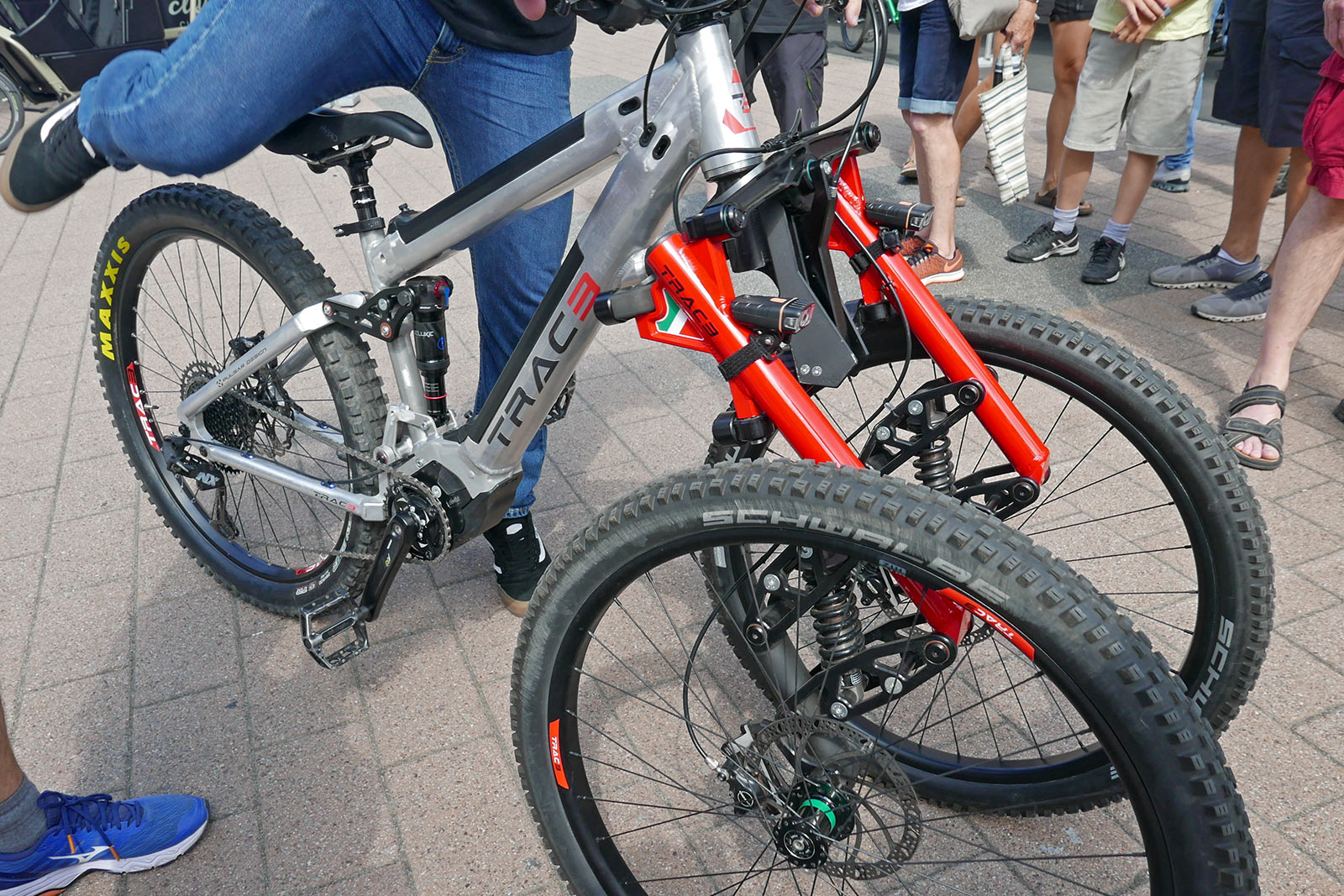 Trac3 say “the age of the cumbersome and inconvenient bike stand is over”.

Keeping it wild… here’s the Trac3 Enduro e-Trike. It has a Polini E-P3+ motor giving up to 90 Nm torque, powered by what looks like two batteries; one in the top tube and another in the downtube. The two front wheels are each separately suspended on a coil sprung leaning linkage “fork” that delivers 130mm travel. The Horst-Link linkage at the rear delivers 150mm of rear wheel travel.

Look familiar? You may remember the leaning linkage fork on the Phase AD3 Adaptive 3-Wheeler that Orange Bikes made for Lorraine Truong, though this example from Trac3 doesn’t look quite so refined. Trac3’s patented T-Drive Link permits lean angles of up to 55° – that’s with both front tires still in contact with the ground. 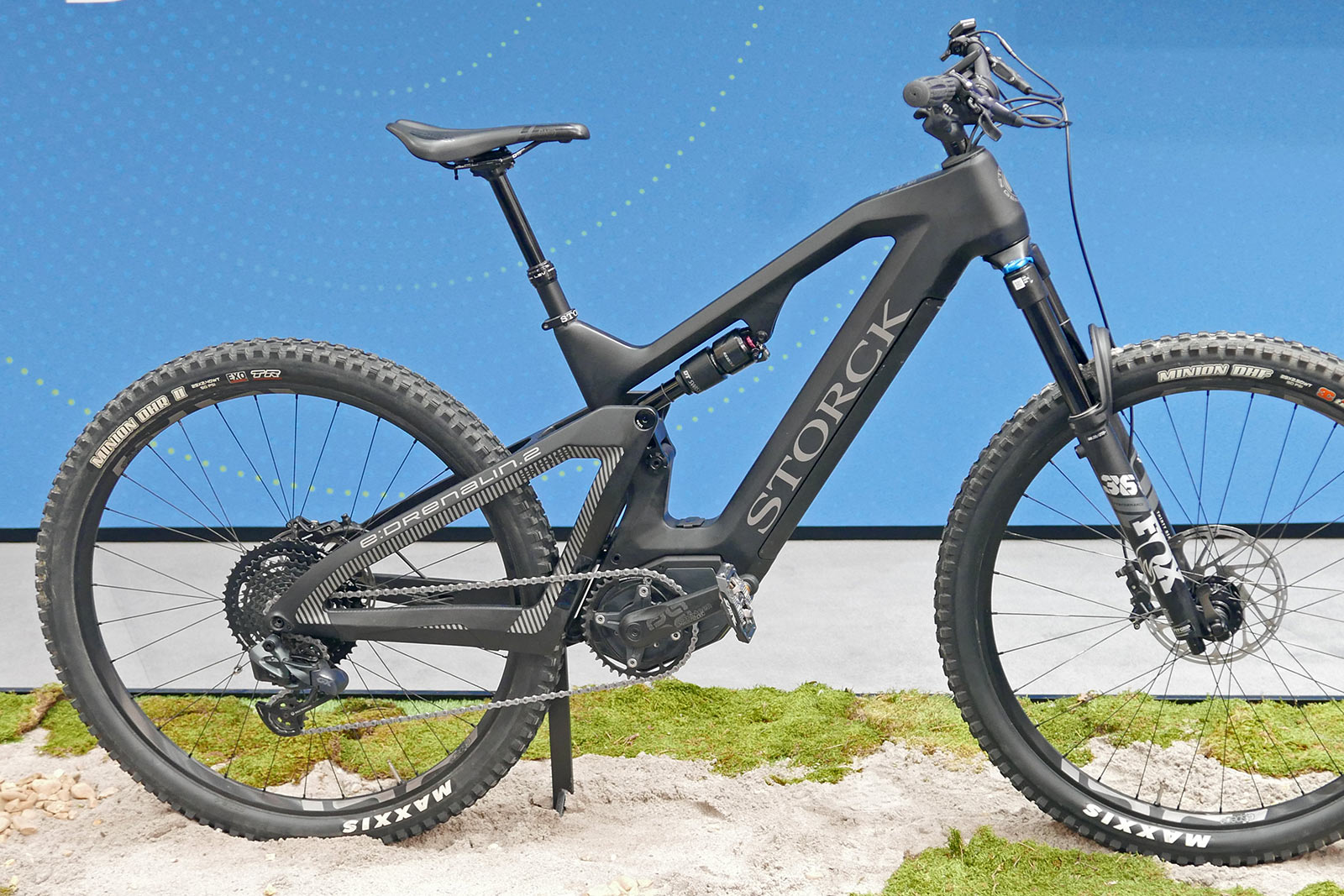 Back to good old Bi-Cycles, we also got eyes on the Storck e:drenalin.2 eBike. Hard to see how many links are in there from this angle (maybe two, with the third uppermost one driving the top tube mounted shock). At any rate, that linkage delivers 150mm of rear wheel travel to this carbon 29er eBike. It runs on a Sachs RS eBike motor. 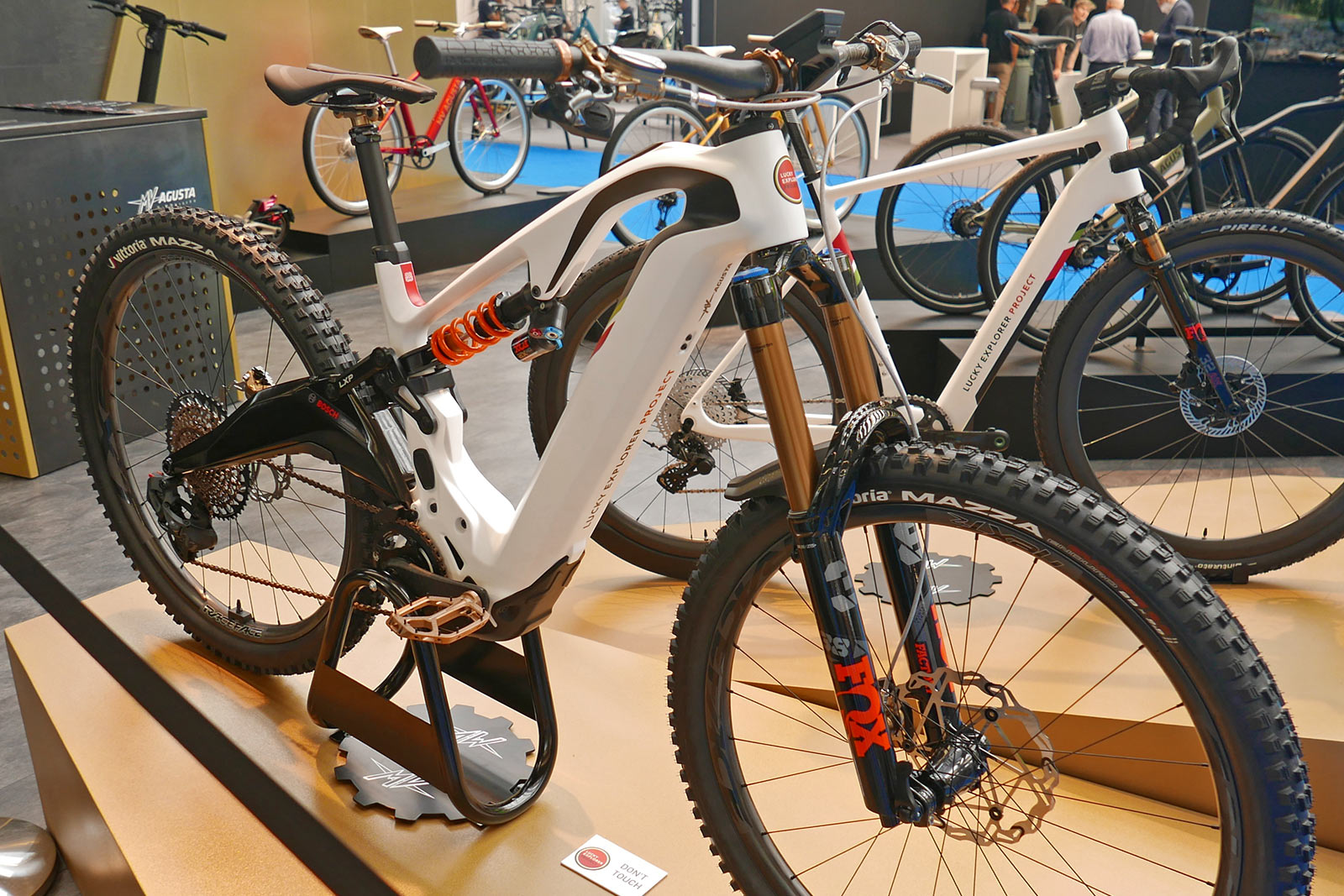 MV Augusta, an Italian brand with a history rooted in motorbikes, were displaying their Lucky Explorer Project range of eBikes. The Lucky Explorer eMTB runs 150mm rear wheel travel damped by a Fox coil shock, and rolls on 29″ wheels with a Bosch motor providing pedal assist. There was a gravel bike, too! 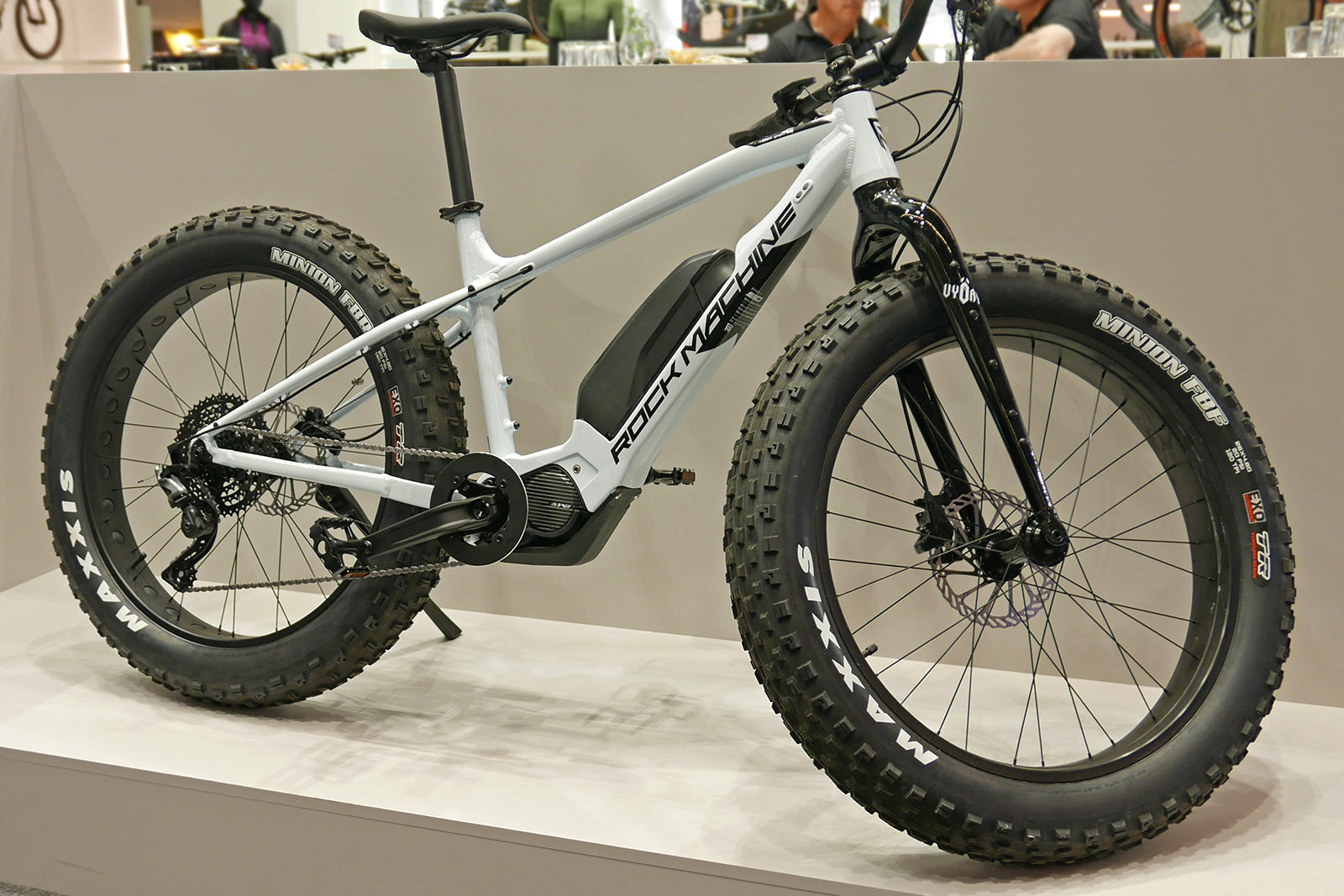 Czech brand, Rock Machine, also had a full rigid aluminum eMTB on display. This is their Vyory Fat eBike built around the Shimano EP8 motor, complete with Maxxis Minion FBF tires; 26″ x 4.8″, with a 180 TPI EXO casing, for those interested. 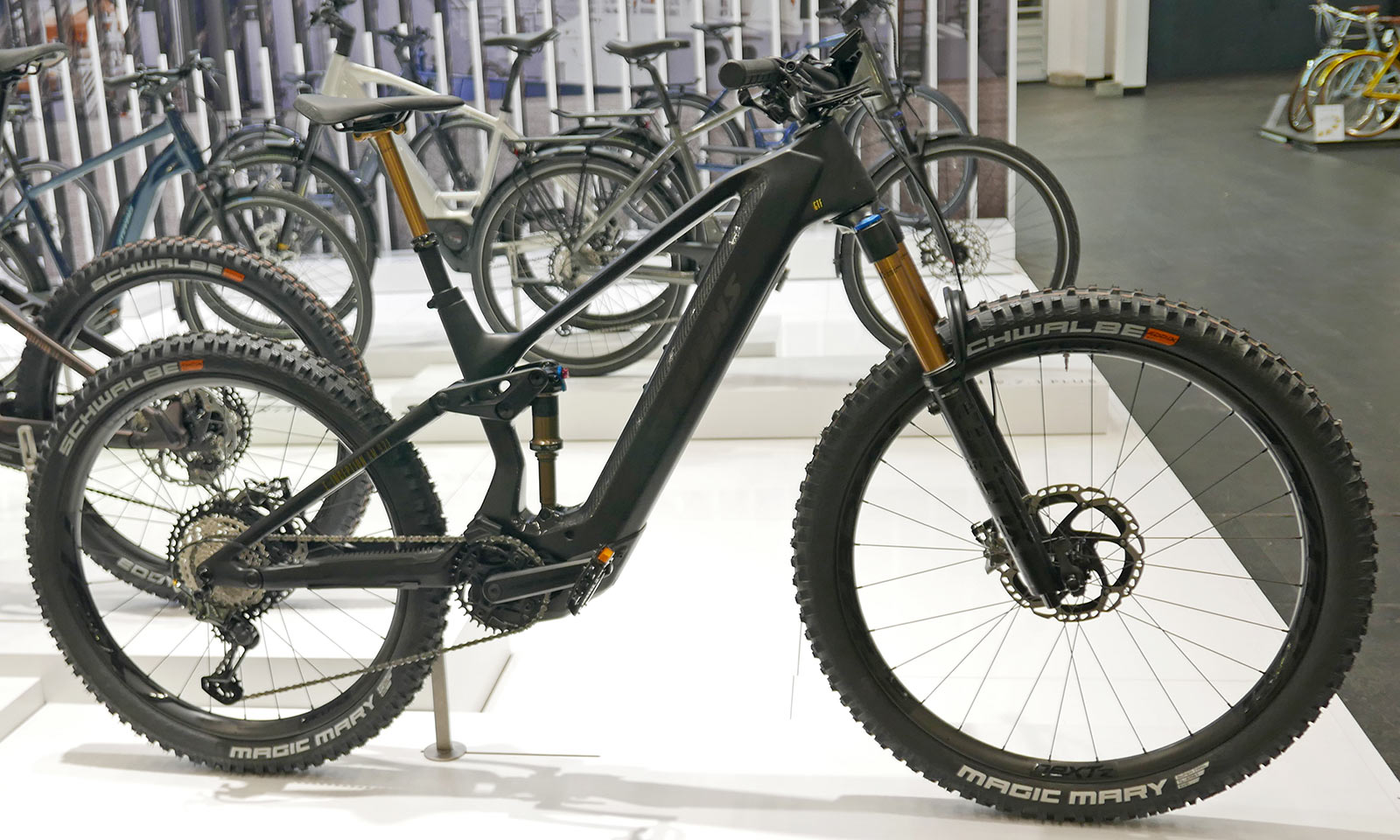 Hamburg-based eBike brand, Stevens, had a huge display of their latest and greatest eMTBs. This one is their E-Inception AM 9.7.1 GTF, a 150mm travel carbon enduro eBike set up in a mullet configuration, with a 29″ wheel up front and a 27.5″ wheel in the rear. It runs a Shimano EP8 motor. Claimed weight for this one is 22.1 kg. 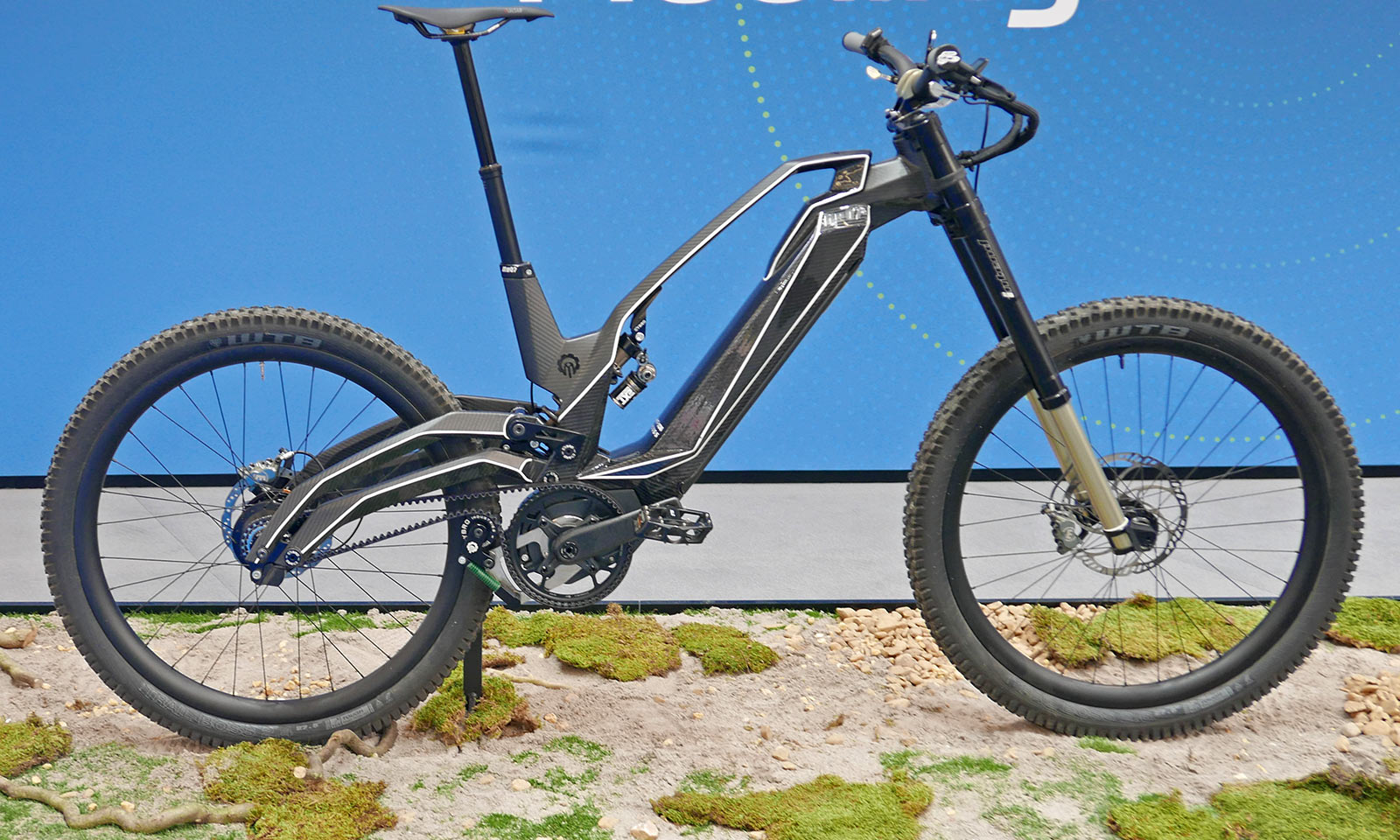 eBike? Check. 215mm rear wheel travel? Check? Full Carbon frame? Check. Upside Down Fork? Check. 27.5″ wheels? Check. Sachs RS motor with Gates Carbon Drive? Check. The Cybro No7 DH eBike will either tick all of your boxes, or none at all. 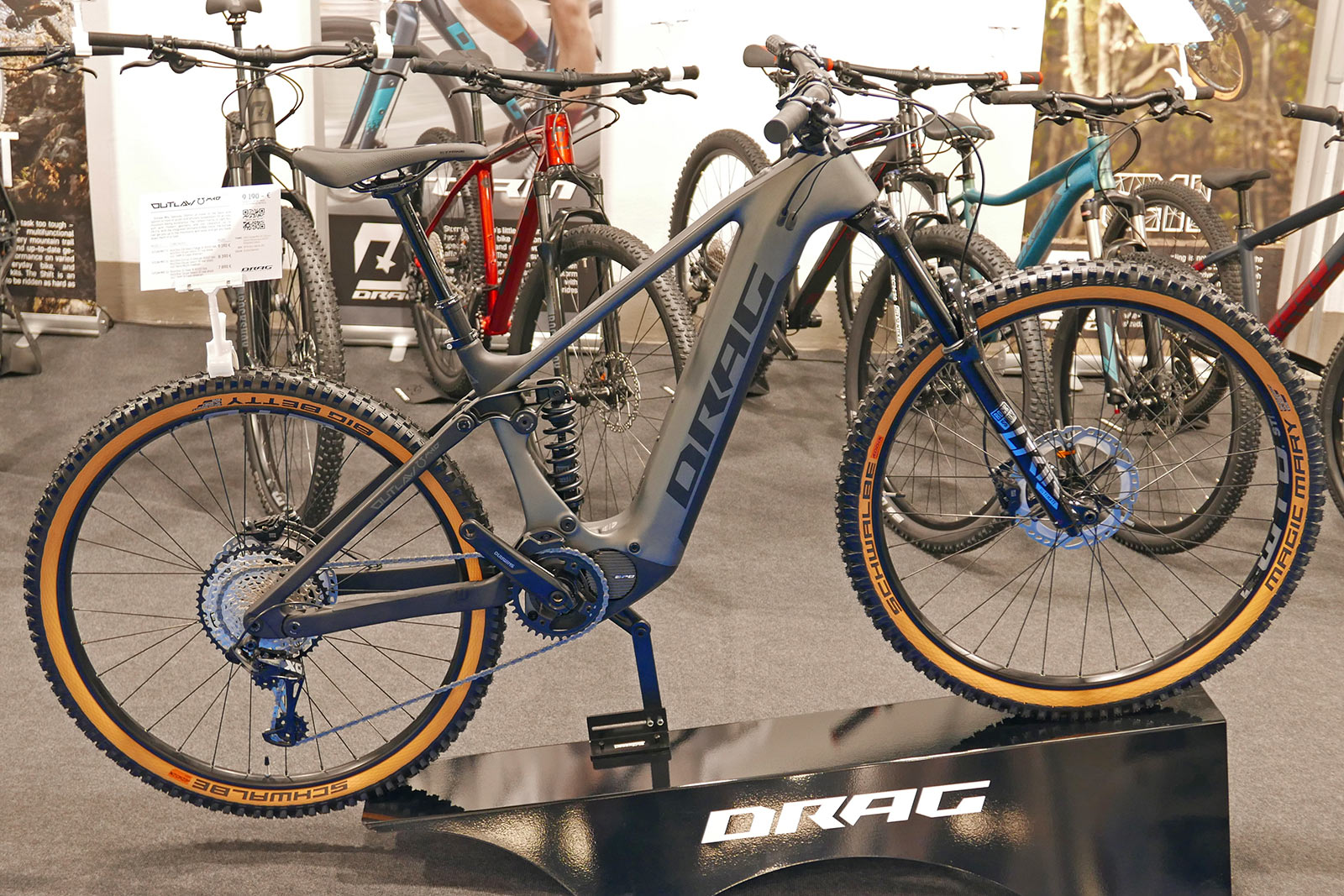 Drag had a more one of the more conventional eMTBs of Eurobike. This is their Outlaw MHO Carbon, a 150mm travel eBike with Shimano EP8 motor and 29″ wheels. The top end 9.0 model will set you back 8499 €, though there are three more affordable options due, too. Shipping is expected in March 2023.