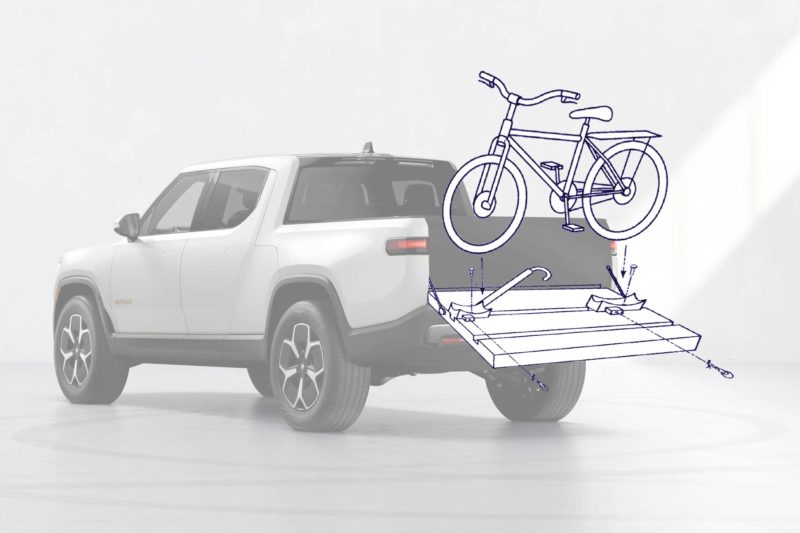 Rivian looks set to integrate the cleanest built-in truck bike rack directly into their tailgate, if this new patent comes to fruition. Why install a hitch rack that can get in the way, or a bike rack that takes up space inside the bed of your pick-up truck, if you could just integrate trays directly into the tailgate? That’s Rivian’s concept, with modular channels to fit any type of bike, and probably some other sporting goods, too…

Rapidly growing upstart electric truck and SUV company Rivian has a super simple bike rack idea that could mount one or two bikes directly to their tailgate. Mounting bikes to your truck’s tailgate is certainly nothing new, but Rivian’s got a pretty cool idea we wouldn’t mind seeing on more trucks.

It also doesn’t look too dissimilar to the extendable rack we saw a few years back on a Toyota FT-AC SUV concept car. 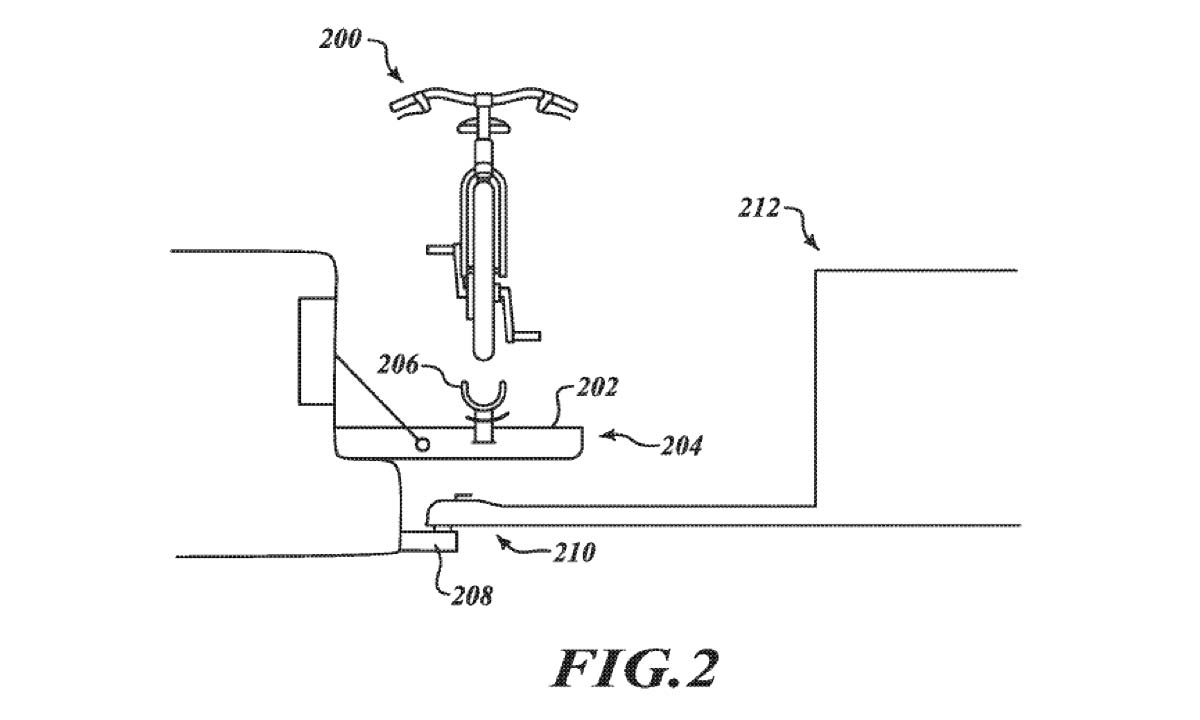 Spotted by our fellow patent-obsessed friend WheelBased, Rivian’s US patent application illustrates how the integrated tailgate bike rack would take up minimal space inside the truck’s bed when folded closed. But maybe most importantly, when in use it would still allow the use of your hitch for pulling a trailer, assuming you have sufficient tongue clearance.

A separate locking mechanism would keep the tailgate horizontal while driving, and keep it and your bikes from bouncing up and down over rough roads 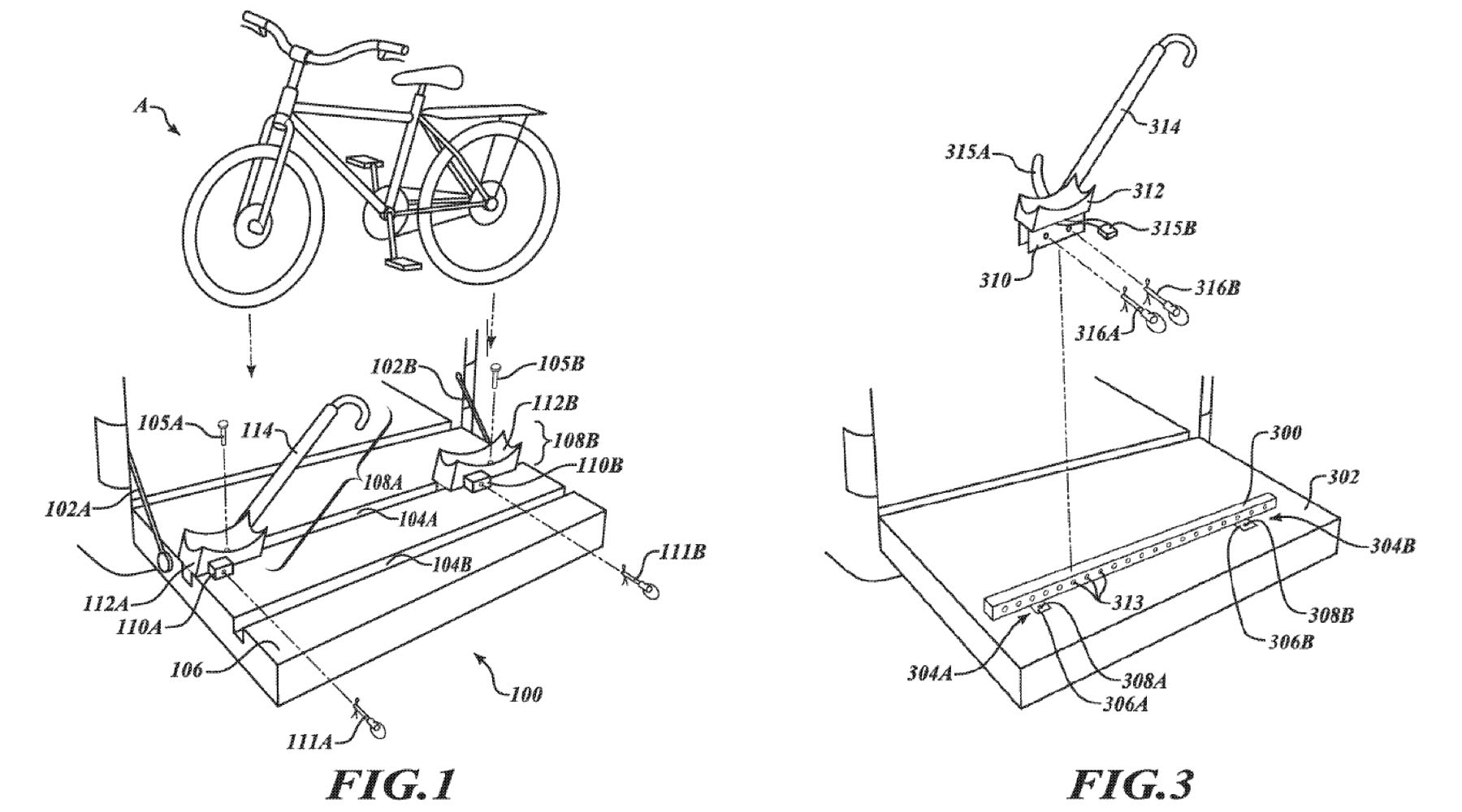 A set of permanent groves inset into the tailgate (or a modular bolt-on rail) would form the mounting point for what are otherwise conventional wheel tray mounts. Sliding back and forth along the tailgate track, Rivian truck owners could quickly adjust to suit the wheelbase of most bikes, then fold it back & stow out of the way when not in use.

Titled an “Integrated Tailgate Cargo System For Automotive Vehicle” Rivian also suggests that they would use the same rails to mount other gear too, whether that’s a beer cooler or something bigger like a kayak? 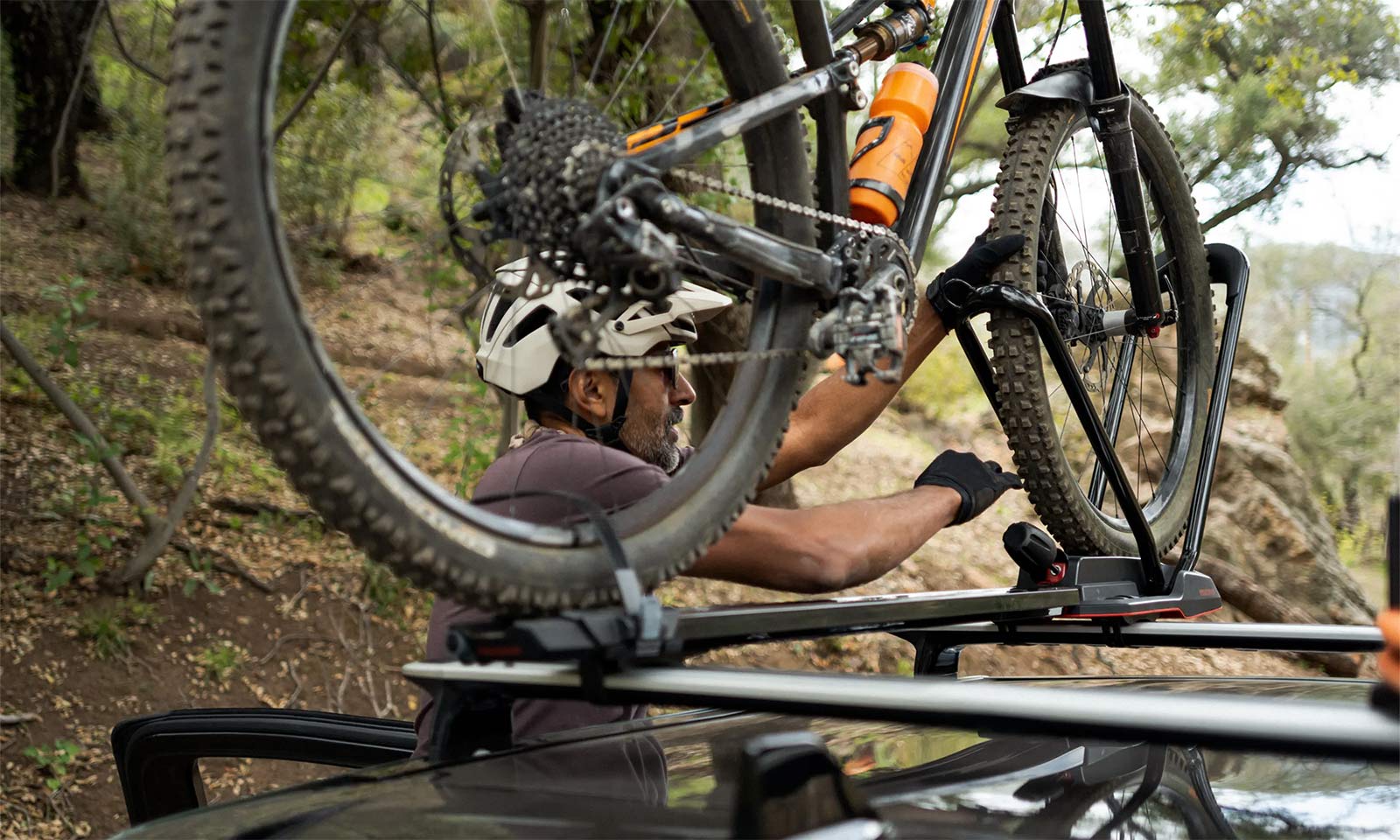 It’s also not the only way they plan to haul bikes in the zero-emission vehicles. Plenty of Rivian R1T trucks already get built up with quick-release, telescoping Yakima-compatible crossbars over the roof & pick-up beds to haul all manner of bikes & gear.

So, do I really want to subject my bike and deep wheelset to 70MPG winds hitting directly perpendicular while driving down the highway with all of the vibrations?

Get a tonneau cover fir the bed, fixed. IF its even a problem, its not like the rack is stuck out on the front of the truck getting the full blast.

Rivian has sent an email to all pre order holder’s of the R1T that the bike mounts on the crossbars will NOT support a bike longer than 70″. This eliminates all adult modern MTB’s.

From the Rivian Yakima Highroad Bike Mount Positioning Guide, it states that “Your bike will fit over the R1T truck bed if the bike is less than 70″ long. If your bike is longer than 70″, mount your bike over the cab of the truck”. Seems like the 70″ thing is just the limit of the length of the bed, since they want you to mount the High Road with the bike facing backwards. Seems like on the roof over the cab, the mounts can face forward, and should fit modern MTBs with the right mount.

Ah, so that’s exactly what the airflow will be like. Who knew fluid flow was so easy to analyze? Awesome! Thanks, Mr CFD!

With a whole truck bed why would you put your bike on the tailgate? Personally I like to have my bikes inside my vehicle. They’re protected from the weather, at less risk in a collision and locked up to deter thieves.

One of the big advantages this could have is the ability to carry bikes while towing something and while carrying something in the bed. That would make it pretty unique. All you would need is some kind of additional divider in the bed (cargo net? Fold up divider?), then you could carry all kinds of bags, cooler, etc. in the bed, tow a camper, and carry bikes. Rivian seems to be pretty clever with the storage integrations, so I wouldn’t be surprised for this to be pretty rad.

This removes all the utility from the bed.. they’re really marketing this entire truck to yuppies..

If you don’t like it, don’t buy it. It’s an option. Nobody is forcing you, Karen.

Bad design, there’s a few ways to load bikes in a short bed and this is the most compromised. For me as a 1/4 short bed crew cab owner the best bike carrying solution is a fork mount to the headwall of the bed. This gives you basically full capacity/utility when the bikes aren’t mounted, allows you to use a roll up tonneau cover, allows you to use a bed extender on the tailgate for mtbs, allows you to keep the tailgate closed when road bikes are mounted, allows you to use a hitch rack with bikes in the bed, and gives access to sitting on the tailgate. Alternatively a center channel mount would be a better solution than this, I’ve seen guys use the two central utilitrack rails on Nissan trucks to mount wheel on racks. This looks good on paper but is technically inferior to a hitch rack in function, utility, durability, and cost which describes most cycling products it seems.

Many folks mock me for my roof racks….well, just last week a guy with $30,000 in MTN bikes (three bikes) on his hitch mount got rear ended by a water truck…no thanks. Too many friends have had bikes walk away from bed mounts as well…for me, up top (no I will not drive an SUV)

If I got rear ended by a large commercial vehicle the last thing I’d by worried about is some bicycles. That is what insurance is for anyways. Way more common for someone to drive their S-Works into the front of their garage than get rear ended by someone without insurance.

Minivan. My bike goes inside, always.

Where I live, it’s illegal to drive with a tailgate down unless the load cannot be stowed inside the bed. This will not fly in Michigan (and others).

Someone please explain to me why no one talks about the very popular and simple tailgate pad? You can fit 5-6 bikes on a tailgate with a simple and affordable pad that drapes over the tailgate. Still room in the bed for stuff.. And you can still add a rack onto the hitch or pull a trailer. This is a dumb design.