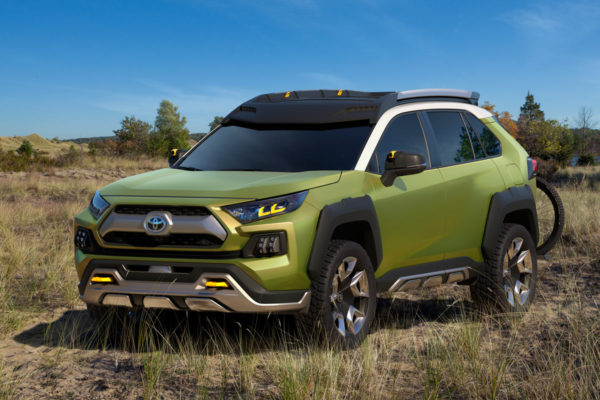 At the 2017 Los Angeles Auto Show, the Toyota FT-AC (Future Toyota Adventure Concept) SUV debuted with features any cyclist or outdoorsy athlete would love to see make it to production. Looking similar in size to one of their best selling vehicles, the RAV4, the FT-AC jacks up the capability with more ground clearance, 20″ wheels, Force Vectoring all-wheel-drive with advanced traction and descent capabilities similar to what’s on the Forerunner.

“FT-AC is perfect for those outdoor enthusiasts who want to dial up the adventure on their weekend getaways,” said Jack Hollis, group vice president and general manager, Toyota division. “No matter the roads, the activities, or the people, FT-AC sparks authentic fun and conversation.” 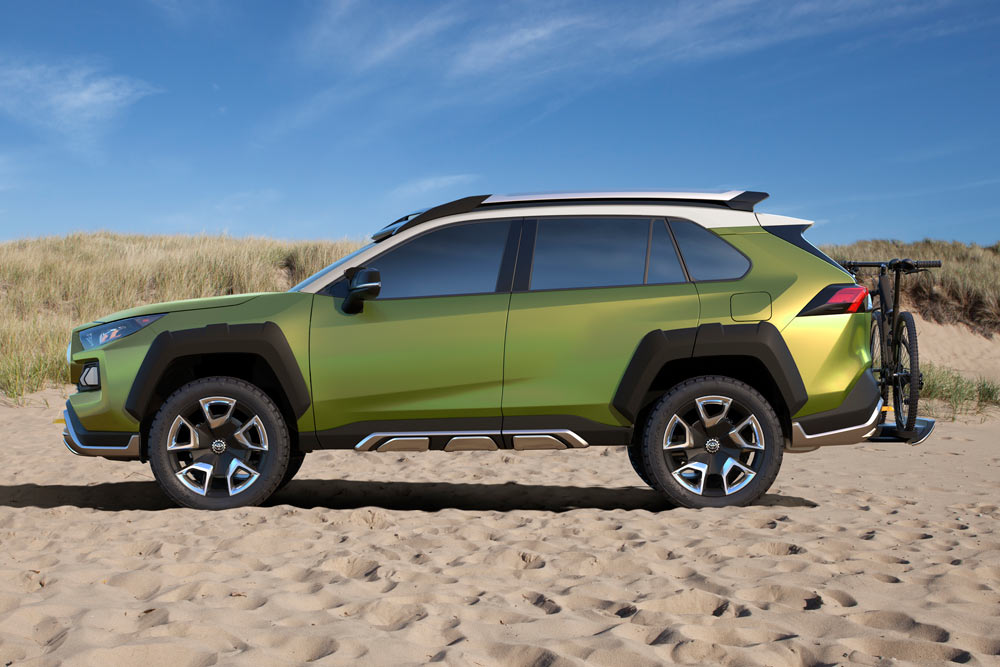 Being a concept, potential features abound, but we’ll start at the back with the integrated bike rack. 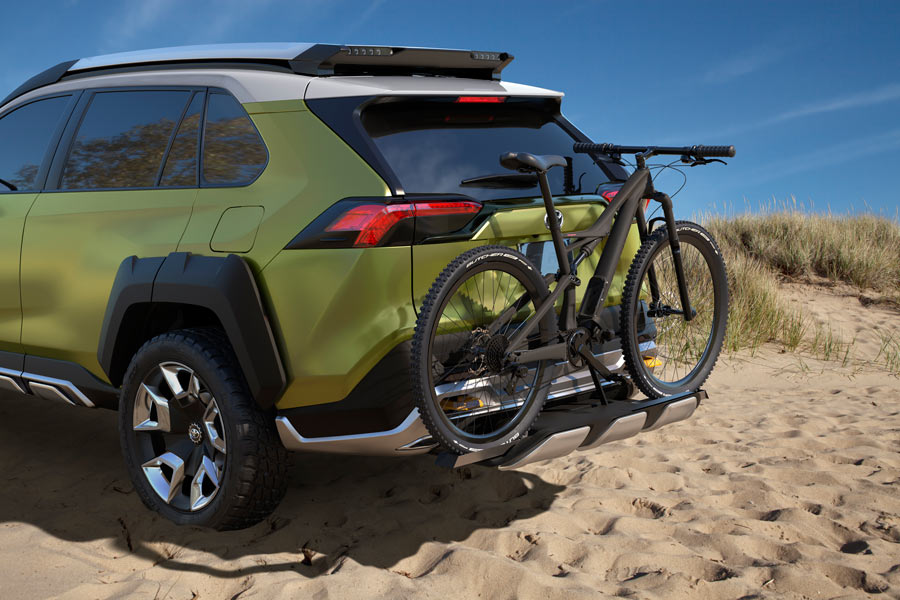 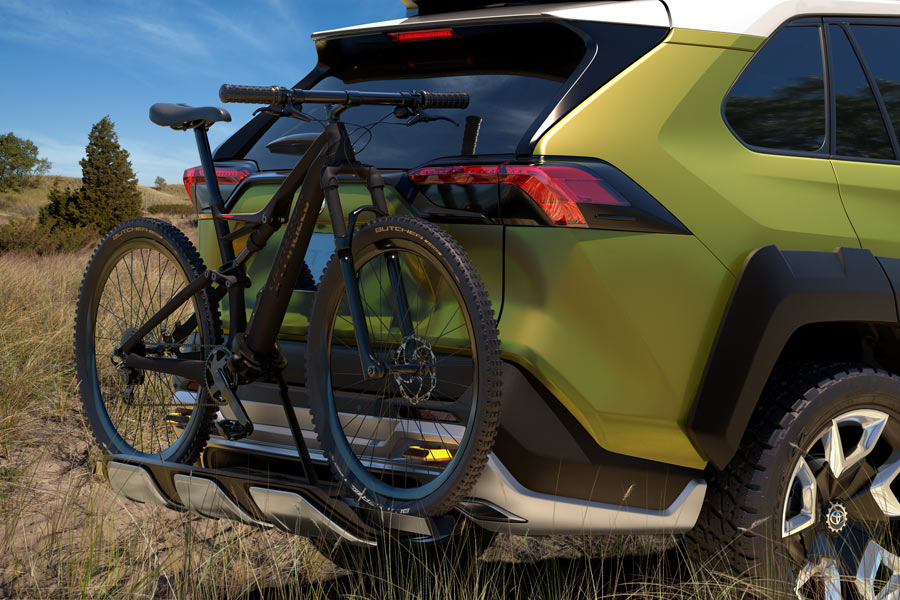 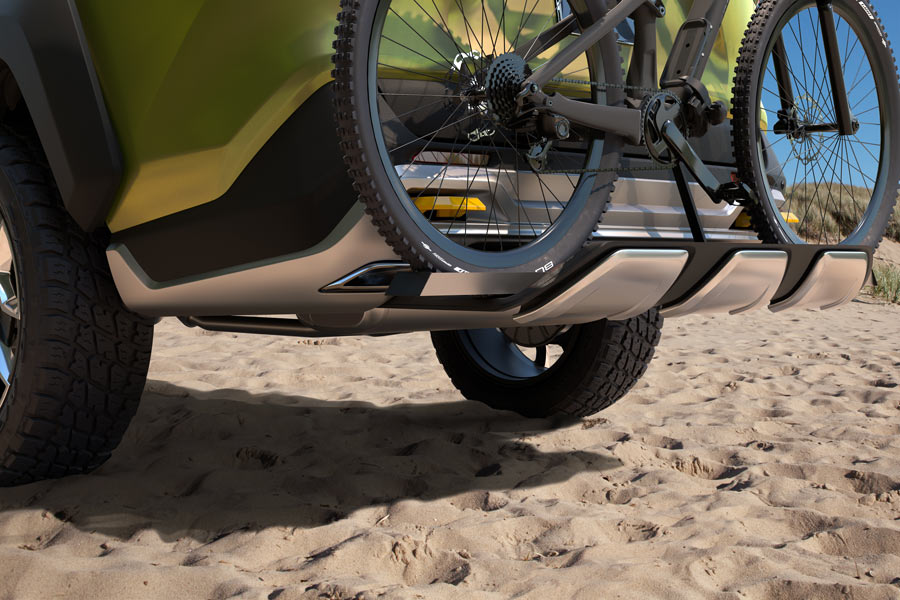 Sure, it’s only one bike, but if we’re honest, that’s probably all most of us need on a regular basis. The tray-style rack slides out from under the rear bumper and secures the frame with a pop-up arm that clamps the downtube. 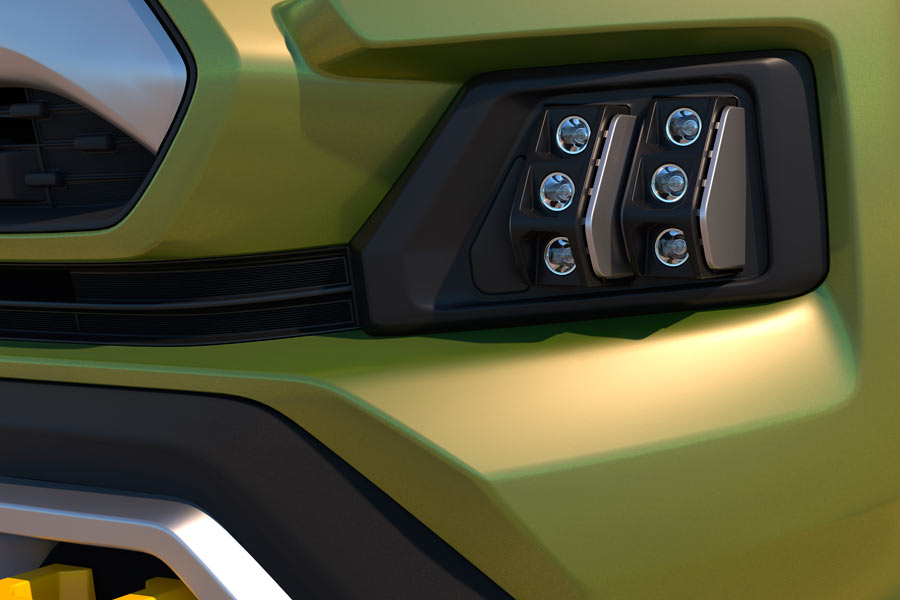 Up front, LED fog lights can be popped out and used to explore the woods at night, even by bike…they say they can be mounted to your handlebars for night riding. 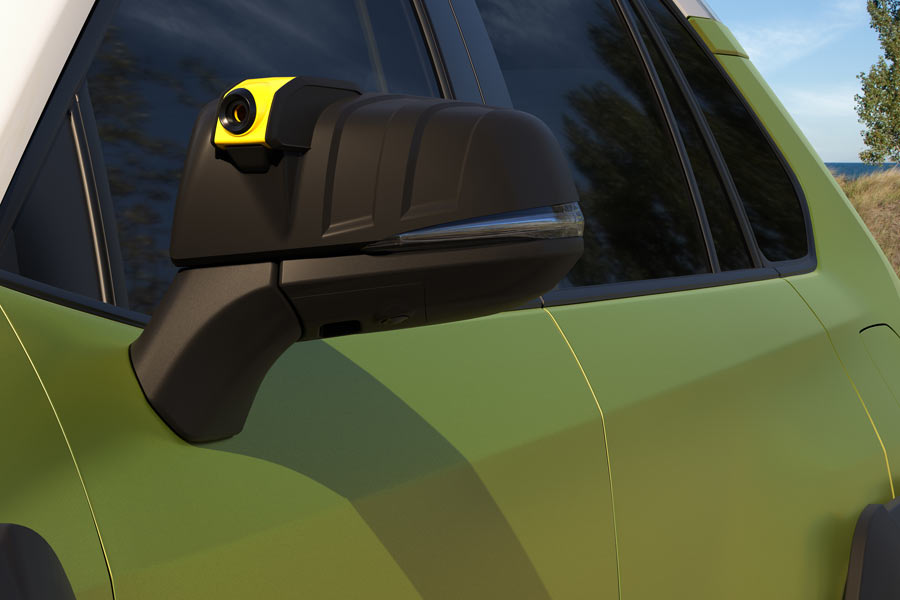 The mirror-mounted cameras (which also work in Infrared) can also be removed to go where the action takes you. Once back on the vehicle, they’ll sync with on-board WiFi and automatically upload your footage to the cloud, where you can edit your shredit via smartphone app and share it with the world. There’s also onboard GPS and geolocation features so you easily find your way back to basecamp. 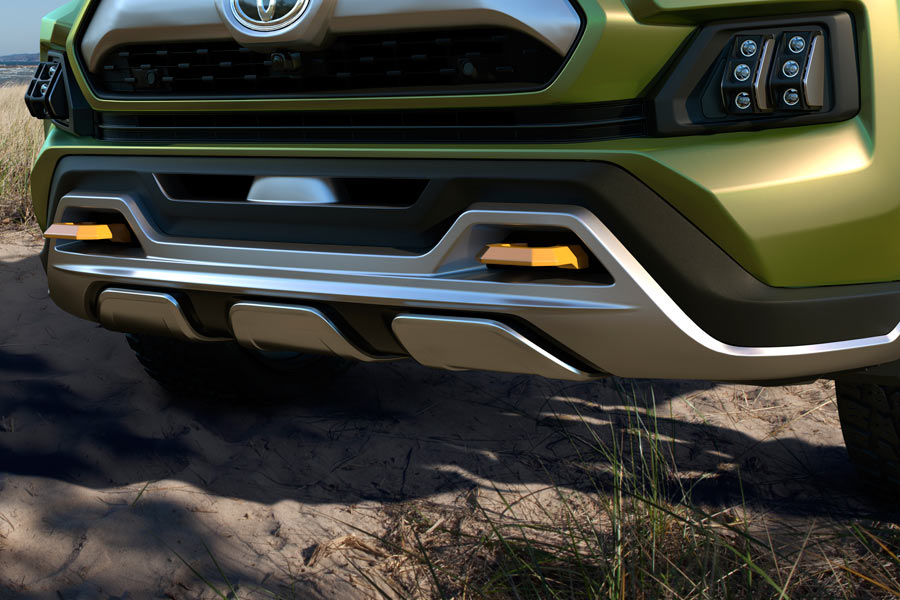 Tow hooks on all four corners. 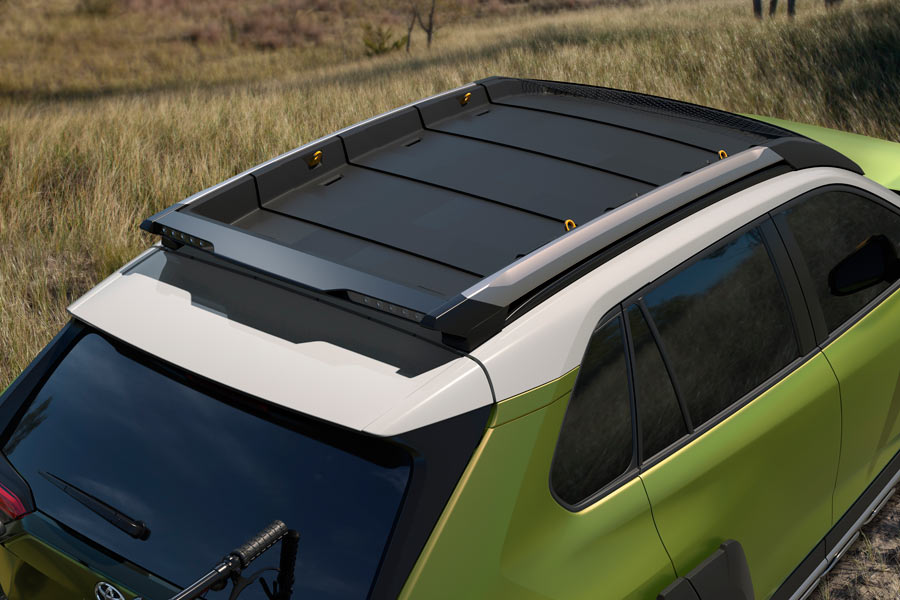 The integrated roof tray has lights built into the front and rear, which can help illuminate your surroundings with ambient light, or push more lumens to help you see where you’re driving. The front ones can even act as a flash for the mirror’s cameras. 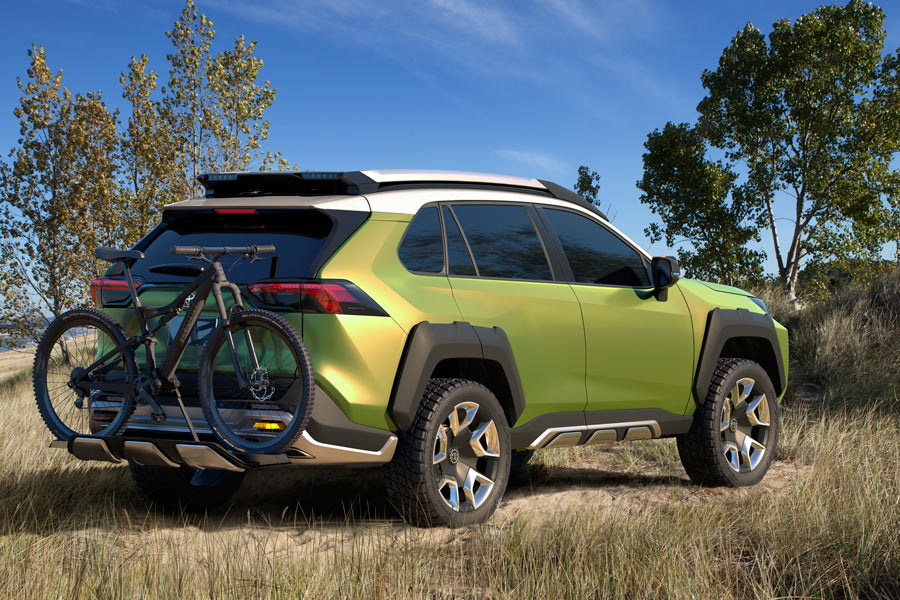 The body is armored at high contact points on the outside. Inside, there’s room for four (probably five if they’re kids) plus gear. 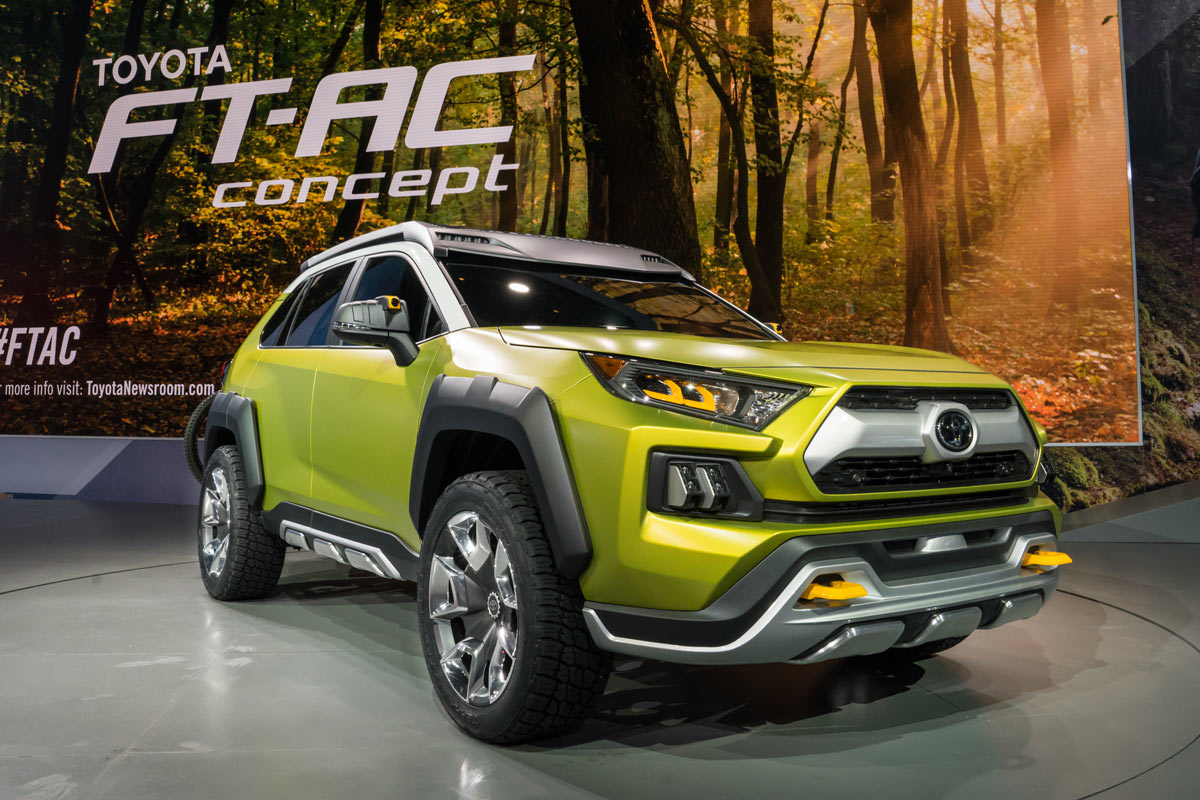 Toyota confirms that, for now, it’s just a concept, but close with this:

“Although currently a design experiment, FT-AC has been imagined as a thoroughly capable gasoline-powered vehicle with an advanced torque-vectoring all-wheel-drive system. This enables power to be routed, as needed, for excellent controllability and maximum traction. Variable terrain-response settings and 4-wheel lock functionality build on its capability by managing traction control and throttle response to maximize grip at each wheel for a more dynamic driving experience.

“And who says a hybrid vehicle can only play on pavement? FT-AC could offer a next-generation hybrid powertrain that blends fuel efficiency with rugged all-wheel-drive grunt, giving drivers better power, responsiveness, and impressive fuel economy – all without compromise.”

This video shows more of their presentation, jump to 7:30 for the FT-AC introduction…and maybe to about 12:50 in for the good stuff. There’s a quick (probably better) recap at 17:40, too.

(deleted). Also this is a bike site

It looks like it could be very very expensive

Based on the pricing of their other not-quite-off-road-but-still-kinda-off-road vehicles, I’d guess base model would start around $32k and go up to $45k+ (assuming there are different levels to start).

One design flaw I see. The exhaust ports being directly in line with the front and rear tires of the bike. It wouldn’t work unless you enjoy melted rubber? Looks pretty cool overall and it is just a concept so there are going to be design refinements. From my own experience Toyota makes some very dependable and quality built vehicles.

Or melted carbon rims…I once made the mistaken of melting a carbon rim when I had my rack positioned in a similar spot in front of my exhaust and then did a long drive up into the mountains where I was on the gas a bunch. Got out of the car to a melted rim…..dumb mistake but learned my lesson!

Also the bike obscures license plate. Some jurisdictions will ticket you for that.

Young people are infatuated with “SUV’s”…… Get a van, you can sleep in it. Your bike stays inside also.

A van down by the river

Everyone says that, but really, think about it. If you’re in a van, then down by the river is a smart move. Adjacent to any body of water is nice, but really, rivers are probably best…

I’m completely unsure what to think of your post, skip

One bike on the rack? Is that really “most of us”? I rarely cart a bike anywhere without my wife and/or a group of friends. If it’s just me I ride the bike out the back door of my apartment….

4 seats and one bike no thanks. We’re at least 2 bikes and if its a longer trip where we want to ride different terrain than we slap two on the Kuat one on the roof (seasucker) and another in the trunk. Where the hell is my station wagon!!!!!!!!!

This is turning into Bicycling magazine, just waiting for the Michelob ULTRA adverts

AWD with the ability to lock the differentials is actually pretty cool. much better for the daily grind than a traditional 4wd system, but worlds more capable than normal AWD.

Non-starter in the UK since neither the rear lights nor the registration plate can be obscured by anything.

Kudos for the Tycho soundtrack Toyota ! Regarding the concept, nice one but, not quite the off the grid kind of ride, but if you could only afford one vehicle and your like the outdoors this could be it, it all comes down to price point…

Single bike rack on an SUV?!

whoa, what a miserable looking car! I will stick with my Audi Station wagon.

Toyota has done well with the bro-truck market. Looks like they want to take over the Subaru Outback segment next. I guess we’ll see what concept parts are left intact once the bean counters put this in to production. I’m hoping the odd “fender flares” are the first thing to go.

Looks so much better than the fugly RAV4, and that integrated bike rack is fantastic.

You pretty much have to buy a truck to get those things today, but they are nice to have if you’re actually parking at trailheads and driving on backroads/fireroad/dirt roads.

This has been on the market, in a usable way (3 bikes), and called flexfix, for years – have a look: https://www.youtube.com/watch?v=-WtXhVWvCfE

The actual bike rack flies in from off camera, so this looks like just a very complicated and terrible idea.

Or here is a video of a version that actually got shipped. https://youtu.be/VA4HaKthwcs
Looks pretty neat, though I don’t know how flexible it would be for bikes of different wheelbase, and carbon crank fans might want to look elsewhere.

people, it’s a CONCEPT car. It’s something they put together for a trade show to get people taking about the company. It’s not something they have any intention of ever selling.

They won’t be selling a car with an integrated rear rack (in the US) for exactly the same reasons no one else does.

I’m glad somebody said it. Those will be great for posing in the mall parking lot.

Toyota continues to underwhelm. It’s been a long time since they delivered anything that wasn’t boring, over thought or derivative. No thanks. If you want a Toyota for mountain bike adventures get a late 80’s early 90’s pick up. They are virtually indestructible no bs vehicles.

Police in some states can, & occasionally do, write tickets for blocking view of the license plate. (This is a bike site, correct?)

I feel like Toyota could have designed a car that runs on ambient carbon dioxide and reverses global warming and carries 12 people and bikes and has magic seats that train you while you sit in them by imperceptibly stimulating muscles and does your taxes and costs $45 and still the grouches on this website would pan it.

So you’re complaining about the complainers? But the people you call complainers are making valid points that reveal this car to be nothing more than a pointless exercise in brand vanity.

I get as upset about concept cars as I do about concept bikes, concept motorcycles, concept aircraft, concept rockets, and concept kitchens, which is to say I don’t at all. After all, I understand what a concept model is all about and how it differs from a production model. I guess a lot of people don’t get that difference.

I’d love to see more auto manufacturers offer integrated bike racks that are functional. The one from Opal that someone above mentioned is pretty cool.

Its a great car for tough off-road adventures! It is a pity though that it will the spend biggest part of it’s life stuck in traffic on the way to the mall.

Along with every other sparkling clean Cherokee Trailhawk, 4Runner TRD Pro, and Tundra Rock Warrior I see every day.

The integrated rack was a factory option on the Opel Antara crossover around 2007. It was also a 2 bike rack which is much more useful. I’m surprised other car companies haven’t made integrated racks since then, although Opel may not have sold enough to make it worth engineering on another vehicle. I was disappointed that the US version of the Antara sold as the second generation Saturn Vue ddn’t have this feature.