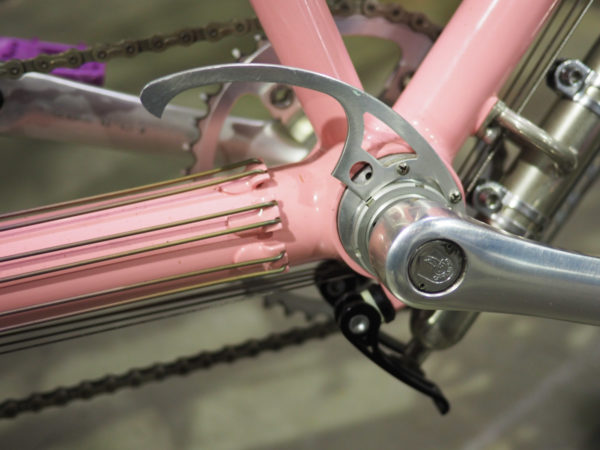 Bilenky was not always “Bilenky”- which is why the standout bike of his booth this year did not feature his name.

The twenty-five year old pink tandem had a Sterling head badge, but the bike was clearly all Stephen Bilenky. It was designed and built for heavily loaded cross-country touring, complete with typical touring fixins’ like spoke holders and custom racks. But in famous Bilenky Fashion, Stephen pushed the idea of a fully loaded tandem through blending accommodations for state of the art interfacing technology for the era and fun throw-back features. It’s clever and creative and thoroughly thought-through while maintaining a sense of humor. 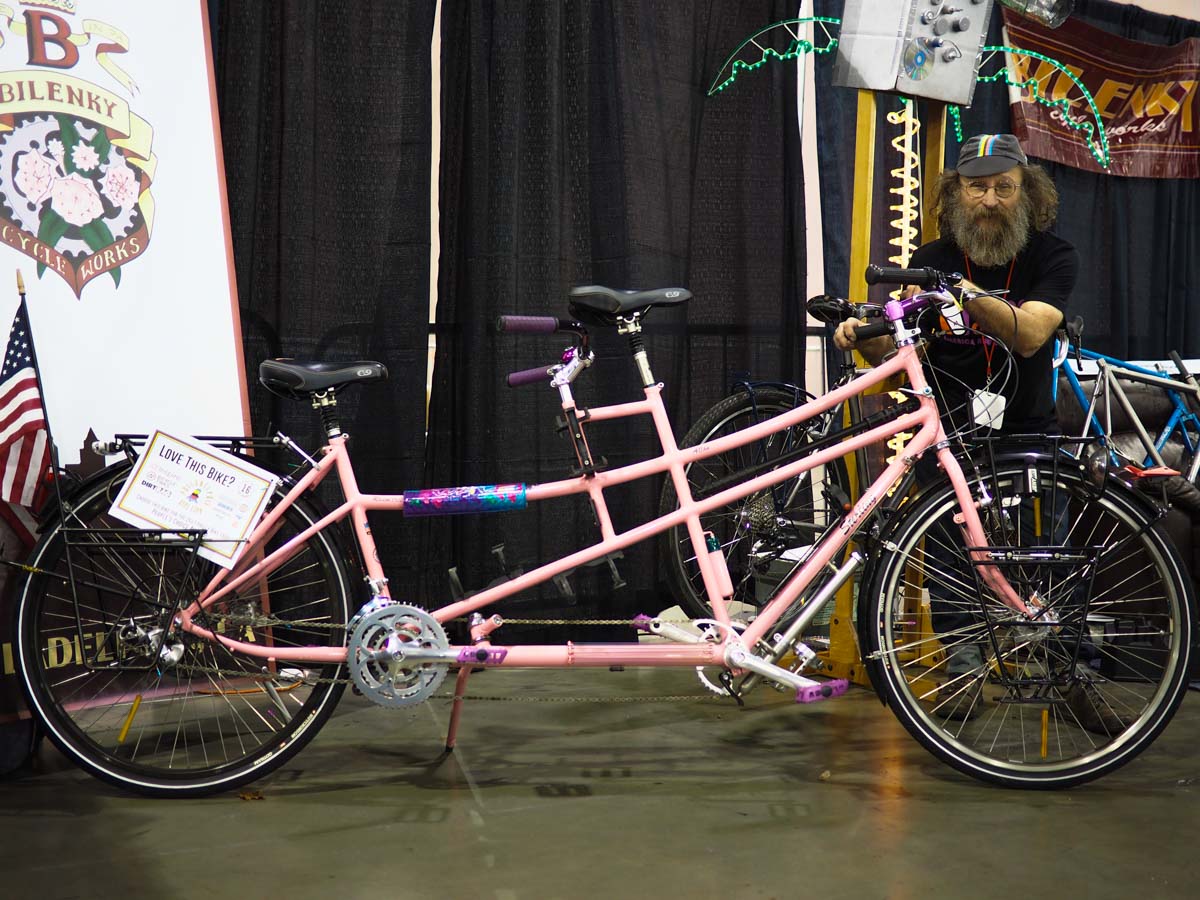 Bilenky designed and built this tandem for a couple who planned to ride it fully loaded, from Philadelphia to California and back. It was designed to hold upwards of 500lbs of riders and gear and features custom front and rear racks he fabricated to match. 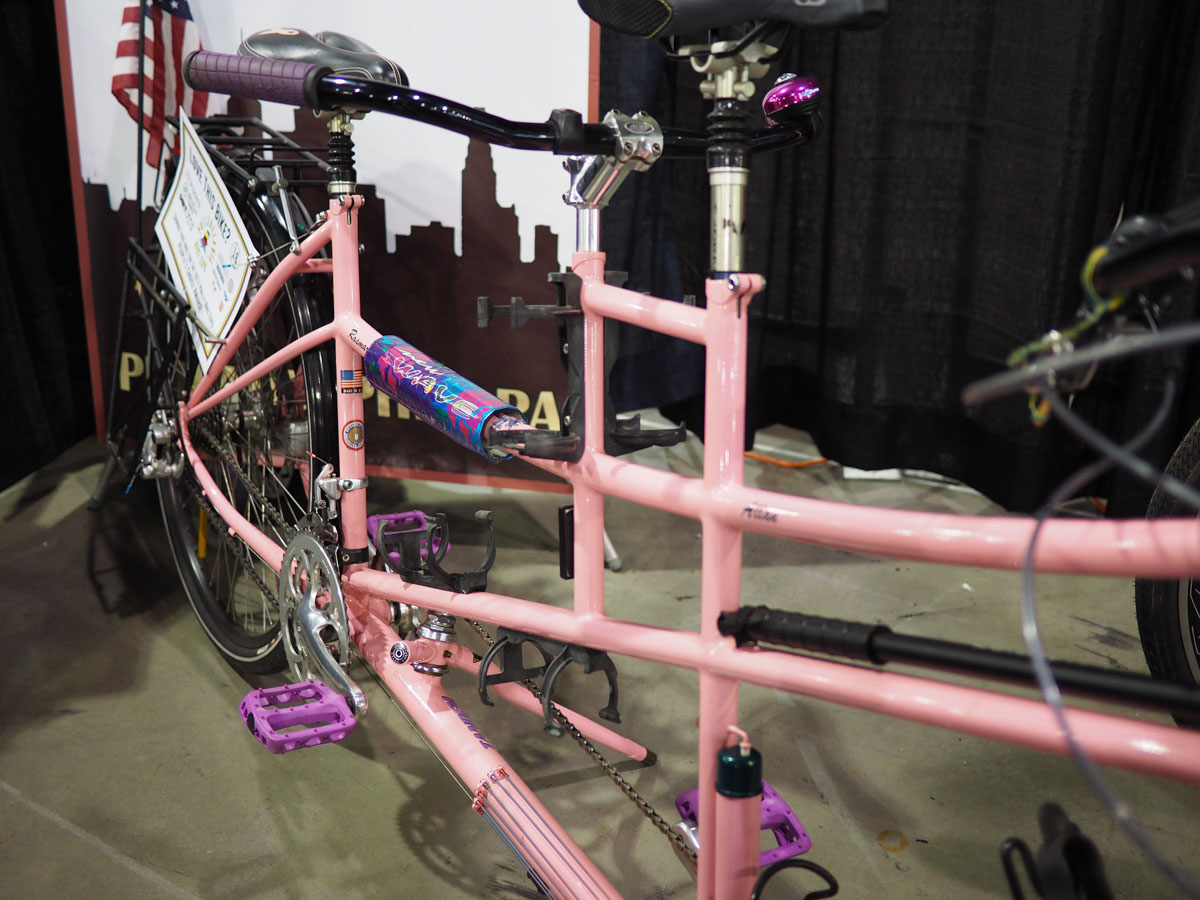 The stoker cockpit is completely independent of the pilot seat post, giving the rear rider total freedom and independence in positioning their handle bar. 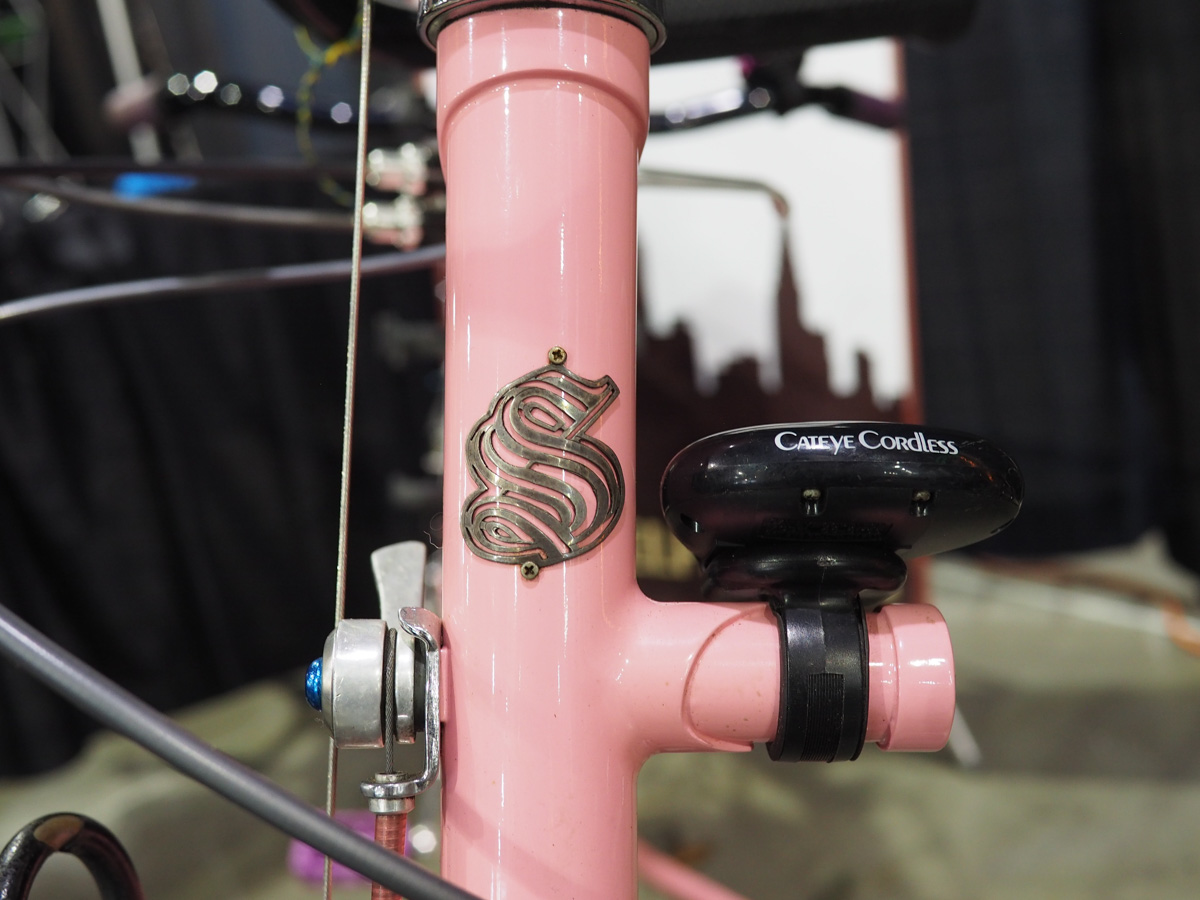 At the time this frame was constructed, wireless computers were coming into vogue… though they had a pretty limited range. Bilenky created a special mount off of the head tube, complete with its own little bi-laminate feature, to hold the computer at the recommended length from the sensor. 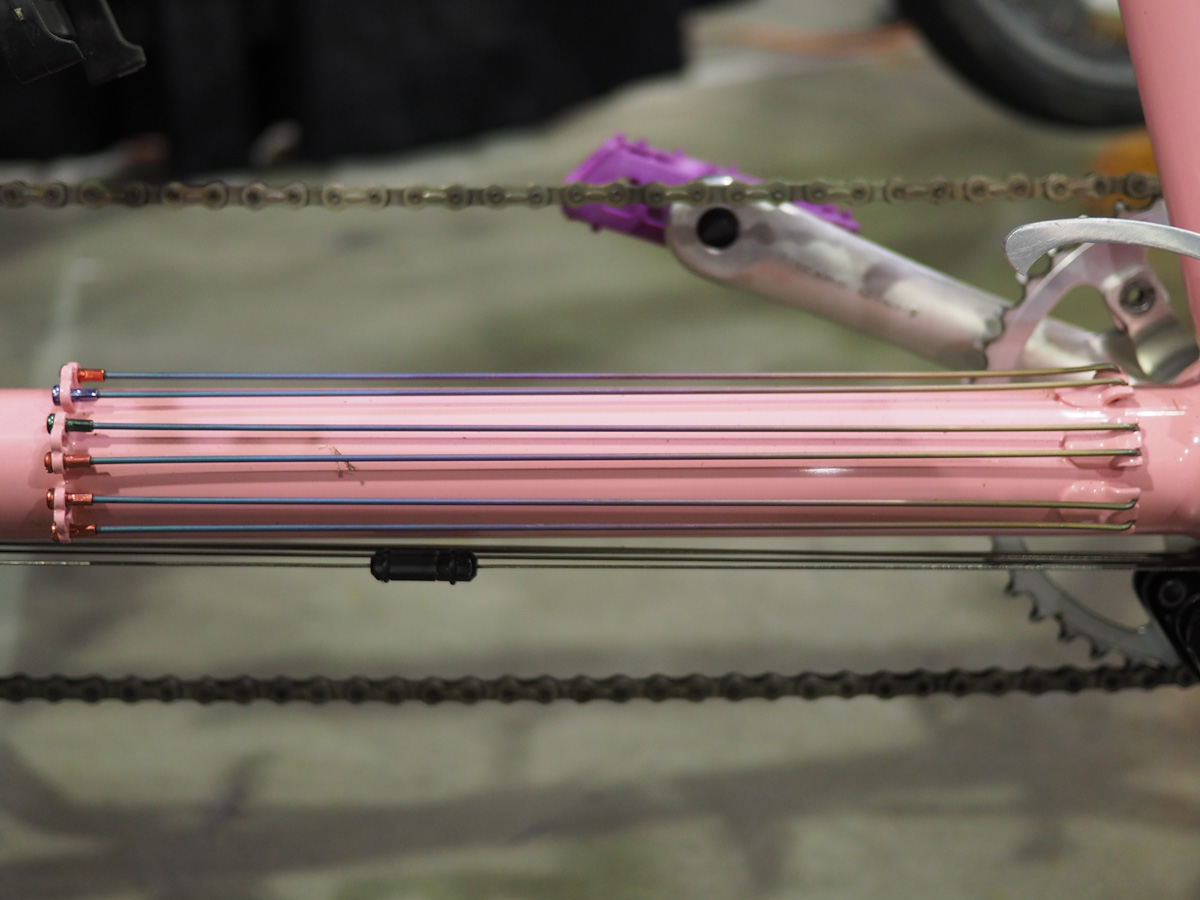 The frame came complete with mounts for half a dozen replacement spokes. However, the integrated frame infrastructure didn’t end there. 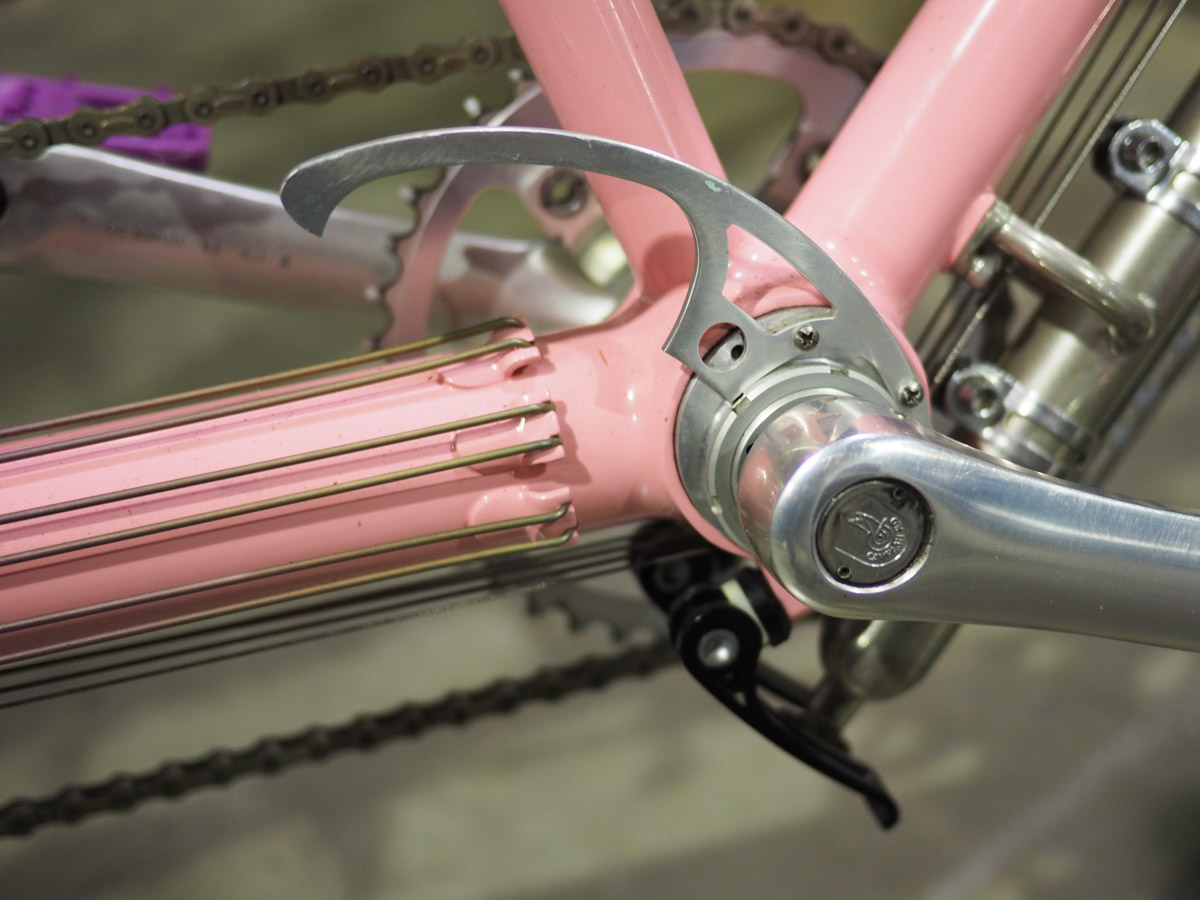 To allow for on-the-road chain replacement front bottom bracket re-positioning, Bilenky constructed this interesting assembly here. The fin seen here is made from a modified chainring and gives the riders leverage to easily adjust the eccentric bottom bracket. To further simplify and speed along the process, the shell bolts are equipped with their own quick release levers.

Also, on the right of the image frame (but poorly captured… you can see the full component in the complete bike image) is a silver tube mounted to the underside of the down tube. This is designed to hold solvent for cleaning the drivetrain on the road. 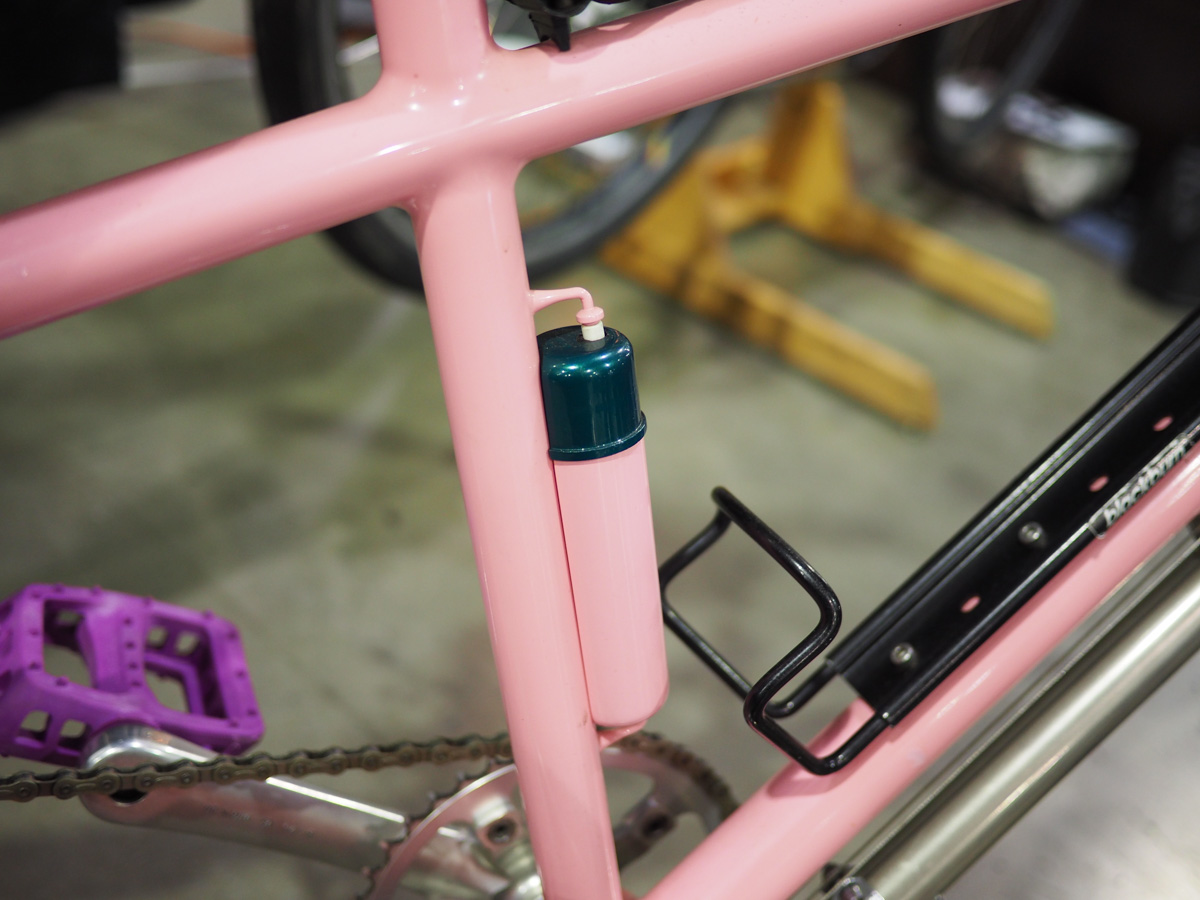 Tucked inside the front triangle is a tiny, pink, integrated toolbox, anchored by pump pegs. 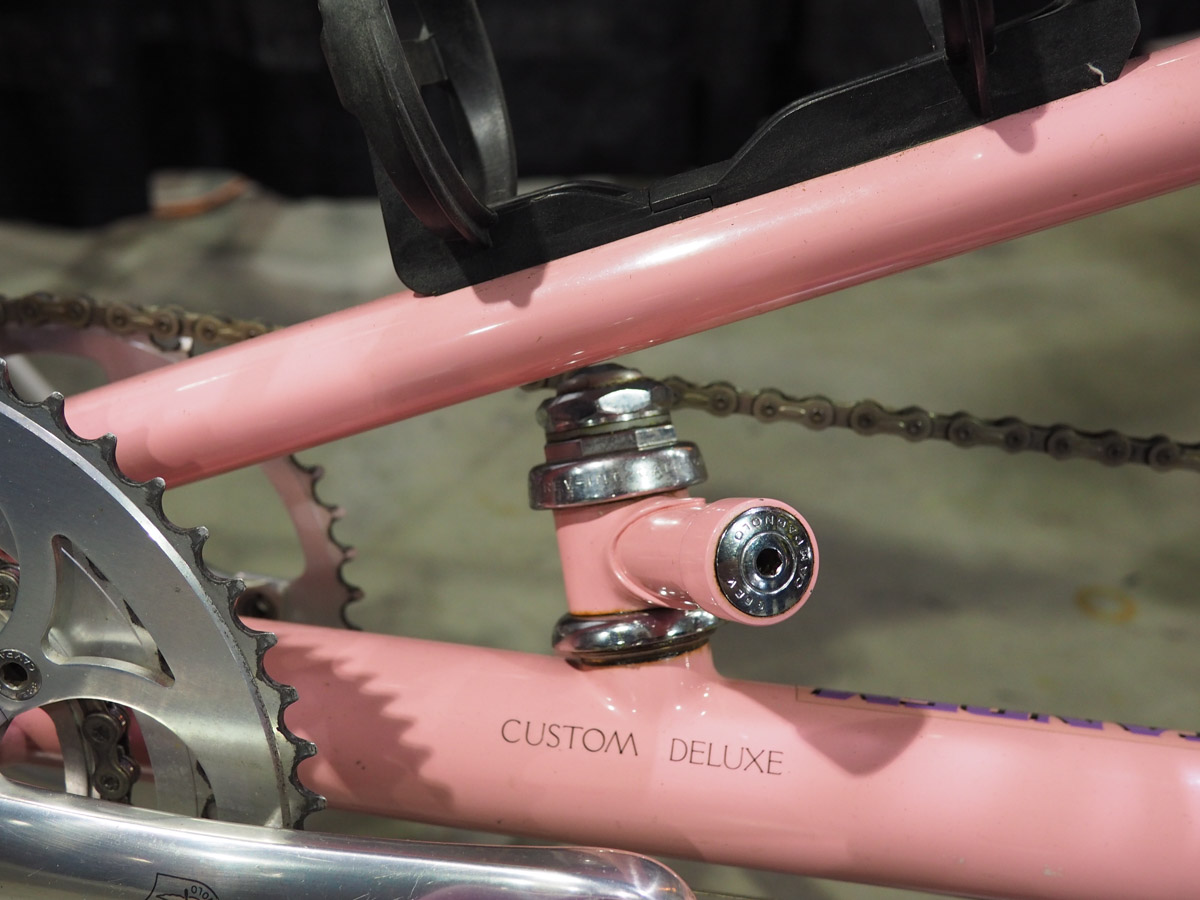 The kickstand is its whole own situation. It is not only lugged and painted to match the frame, but its pivot bearings are an upcycled Campy headset. 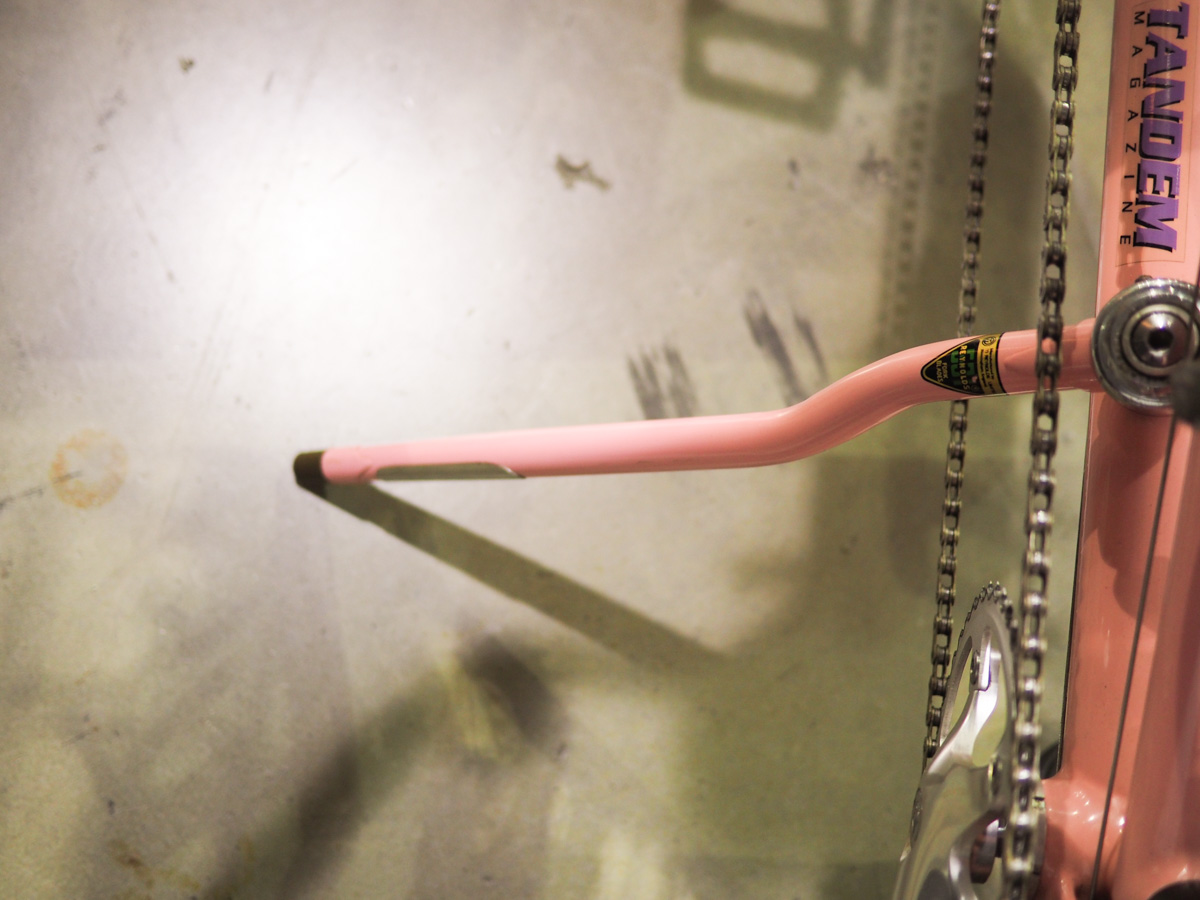 The kickstand is a formed Reynolds 531 chainstay, complete with designer tube decal. 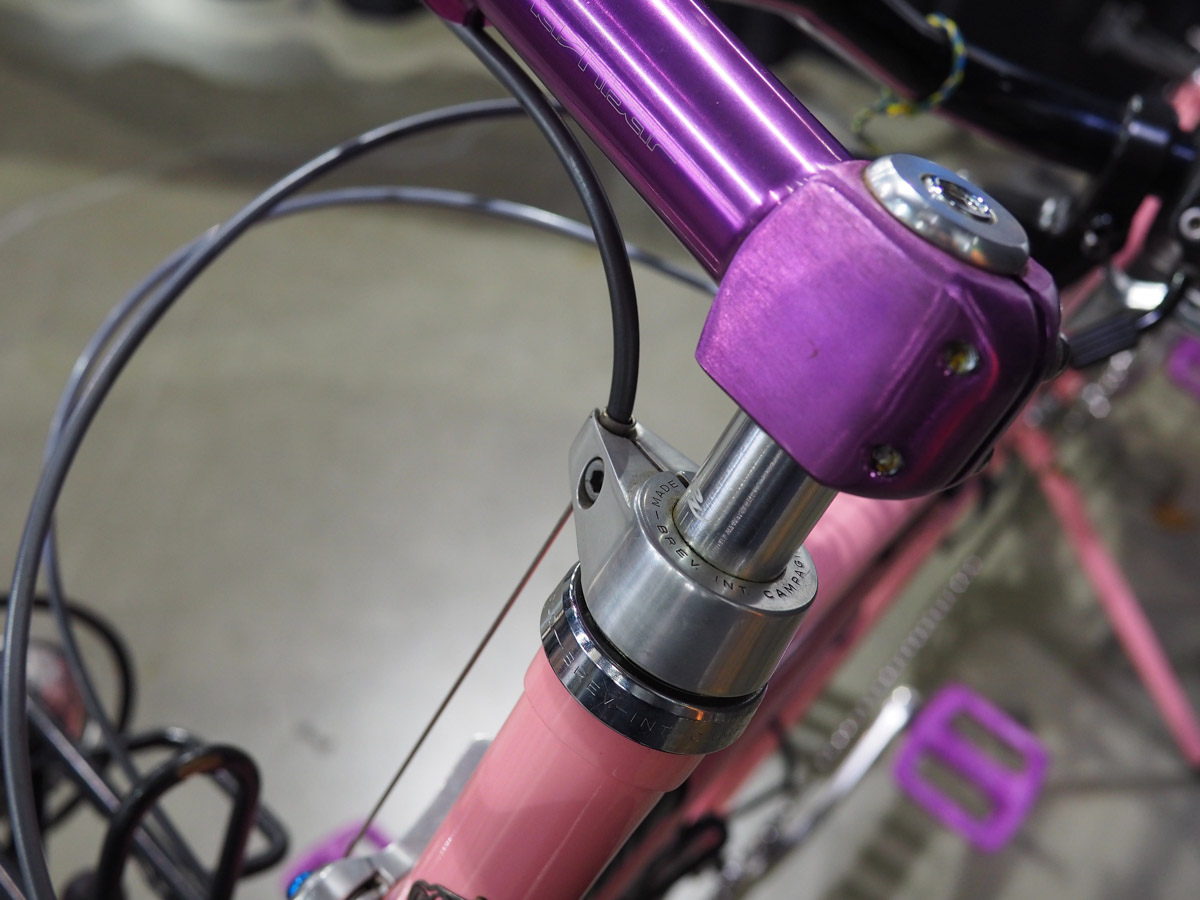 The Campy theme carries though, however. If you are sharp-eyed and clever, you’ll notice that the bike was dripping in period appropriate Campagnolo, from the cranks and headset and cable hanger and dropout to the Bullet grip shifters on the cockpit.

(Ed: What, no Campy seatpost?)

Nice but over thought. The kickstand is weak compared to an Esge Double. Why go with a threaded steer only to plug in a no thread adapter and stem? The Campy cable hanger was troubled from the get go and makes it a royal pain to adjust the headset. I like the stoker stem idea but a missed opportunity for a 2nd head badge logo right there.

The Esge double is not a very stable kickstand at all. For a two leg design it’s got a very narrow stance. Get an Ursus Jumbo. Way more stable.

My wife and I have used an Esge double for thousands of tandem miles. It’s not so narrow. I’d rather the weight go straight down than all of it leaning over anyway. You also can fix flats and work on the drivetrain since the rear wheel is off the ground. Not so with a side kick.

Jagshot, was the threadless steerer tube available when this bike was built? I don’t remember seeing them before 1997?

@BillB, I built a bike in early 93′ with a Dia-Comp Aheadset, and they were introduced to the market a year or more before that. See this article for the full history: https://cyclingtips.com/2017/08/origins-how-the-aheadset-threadless-headset-changed-bikes-forever/

Having said that, up through the mid/late 90s, it remained more of a MTB thing, and a lot of road oriented bikes stayed threaded. This bike certainly could have gone threadless, but doing so while keeping the Campy theme might have been problematic.

I remember seeing aheadsets first in 92-93 and they where in wide usage by 95.

What is the big canister under the down tube? Compressed air tank?

article said it was a tank for chain cleaning solvent.

“Also, on the right of the image frame (but poorly captured… you can see the full component in the complete bike image) is a silver tube mounted to the underside of the down tube. This is designed to hold solvent for cleaning the drivetrain on the road.”

Smoked too much drugs and built this. Burning man bike totally.

Looking at the incredible detail and almost insane level of idea integration makes me think of some of the great writers and artists, one does not have to like the work to fully appreciate it. This is an amazing piece of workmanship.

Wow… It’s great to see the thought that went into the details on this bike. Obviously, it’s not for everyone but I’m always happy to see hand crafted bikes of this level.

That’s my bike and the kickstand is plenty strong. This bike made an 8,153 round trip of the Continental USA in 1994 – ocean to ocean, up the west coast and back to Philadelphia again…it, “held up” well. I helped Steve finish this bicycle and am still working with him to this day in the shop.

“Weak” was a bad word sorry. I meant inferior. 🙂 to a double stand. They are just so much better for parking on unlevel ground and the rear wheel being elevated makes it so much easier to work on it in the field. I would still love to ride your bike.

Allan- I know your trip was previous to when these things were easy but- do you have any shots from that amazing trip?
I’d love to see that wonderful bike fully loaded.
Any links to folder full of fun photos?

The more places I ride, the more I learn that there are many ways to do things, and nearly all of them work great.
Especially in the world of long distance touring.
Doing such a trip on a tandem, I’m amazed and envious. Wonder how me and mine would fare! (fine if I let her steer I suppose)

Allan- if you have an image, send it along and I’ll tack it onto this post.

Lovely bike. There are people who will argue about kickstands. Weird.

It’s like that with gear of any sort. Tandem kickstands are not a richly debated topic sure but if you think you don’t need one then your not very experienced in tandem touring.