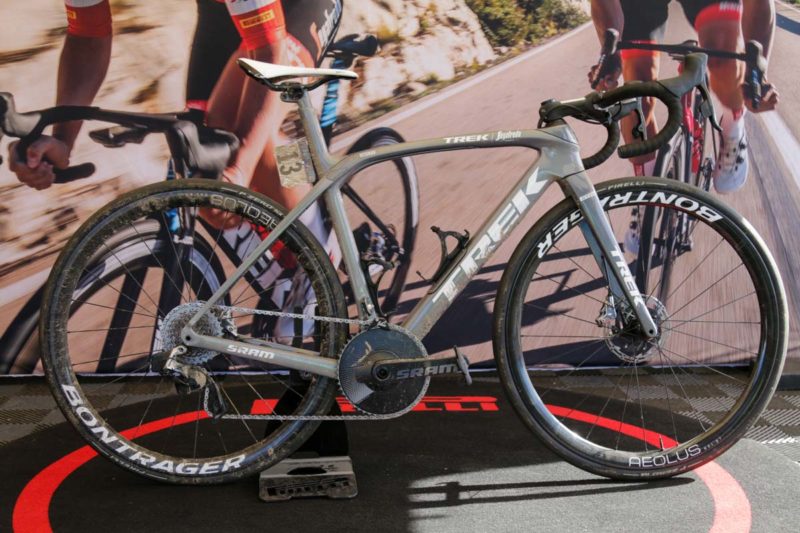 For any rider, crossing the line first at Roubaix velodrome during Paris-Roubaix is a big reason to celebrate. But for Lizzie Deignan, the occasion was extra significant as it was the inaugural Paris-Roubaix Femmes. After several delays due to COVID, the race finally took place in October 2021 with Lizzie taking the win. 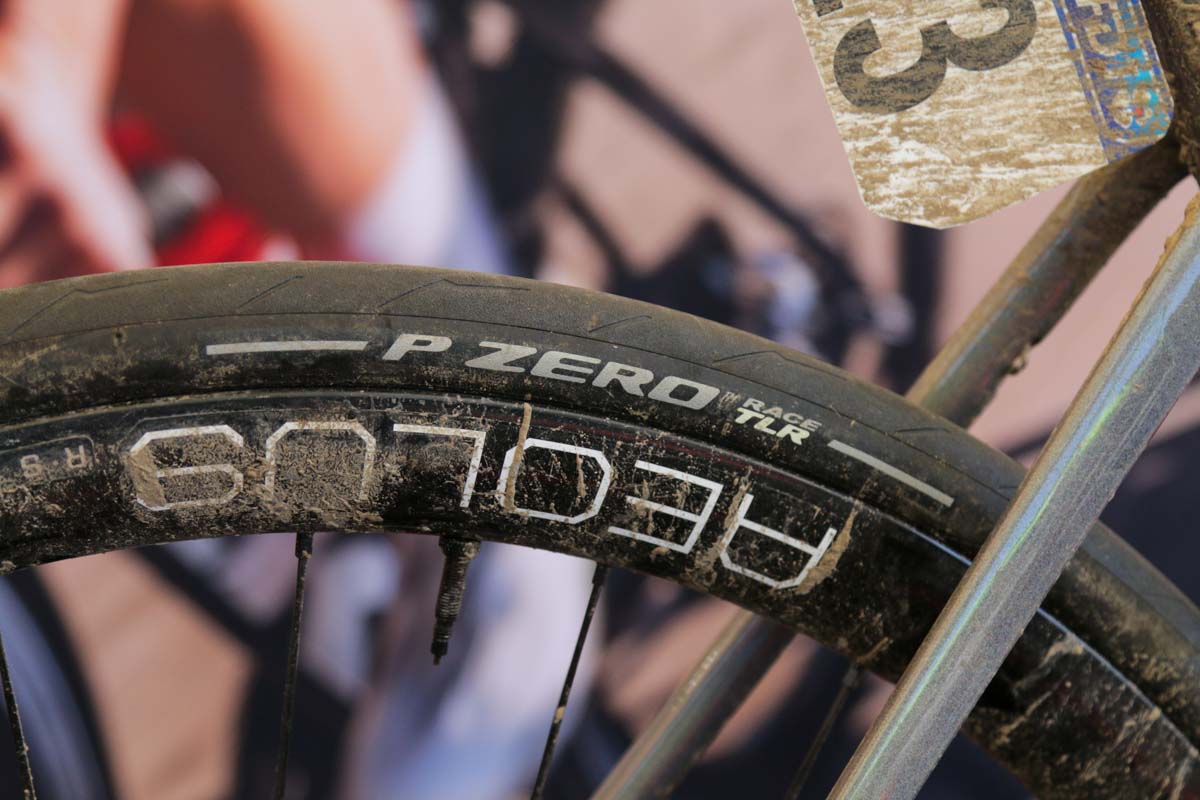 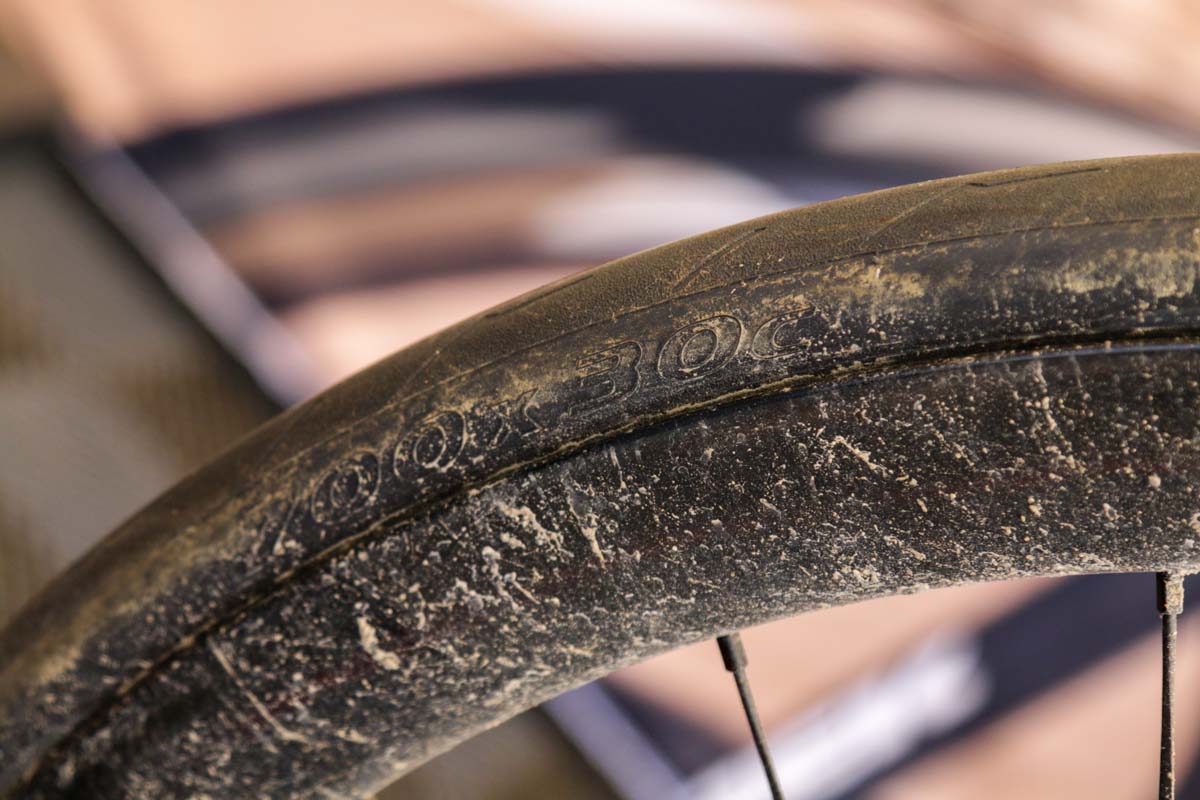 During Sea Otter, Pirelli had Lizzie’s bike in their booth due to the significance of the tire selection. For a race traditionally run on hand-made tubulars, the 30mm tubeless Pirelli P-Zero Race tires are a departure–though clearly a successful one. The tires were run on Bontrager RSL 37 wheels. 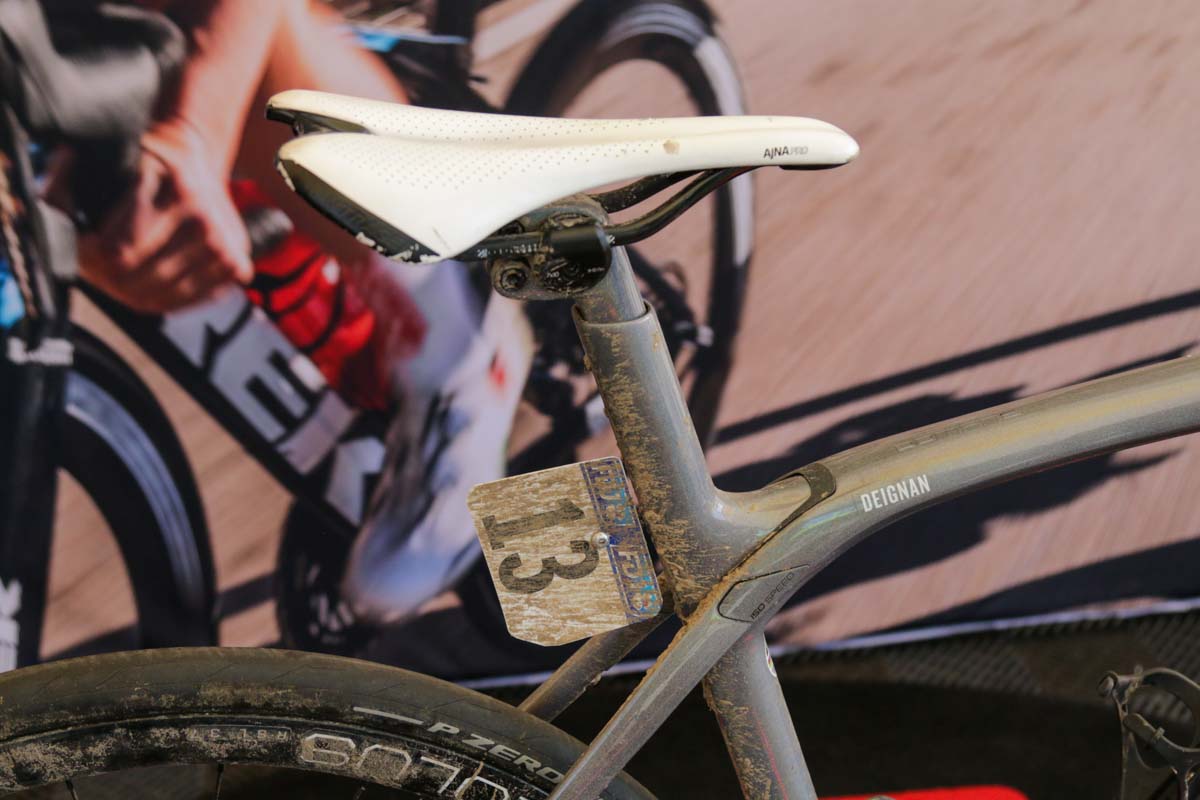 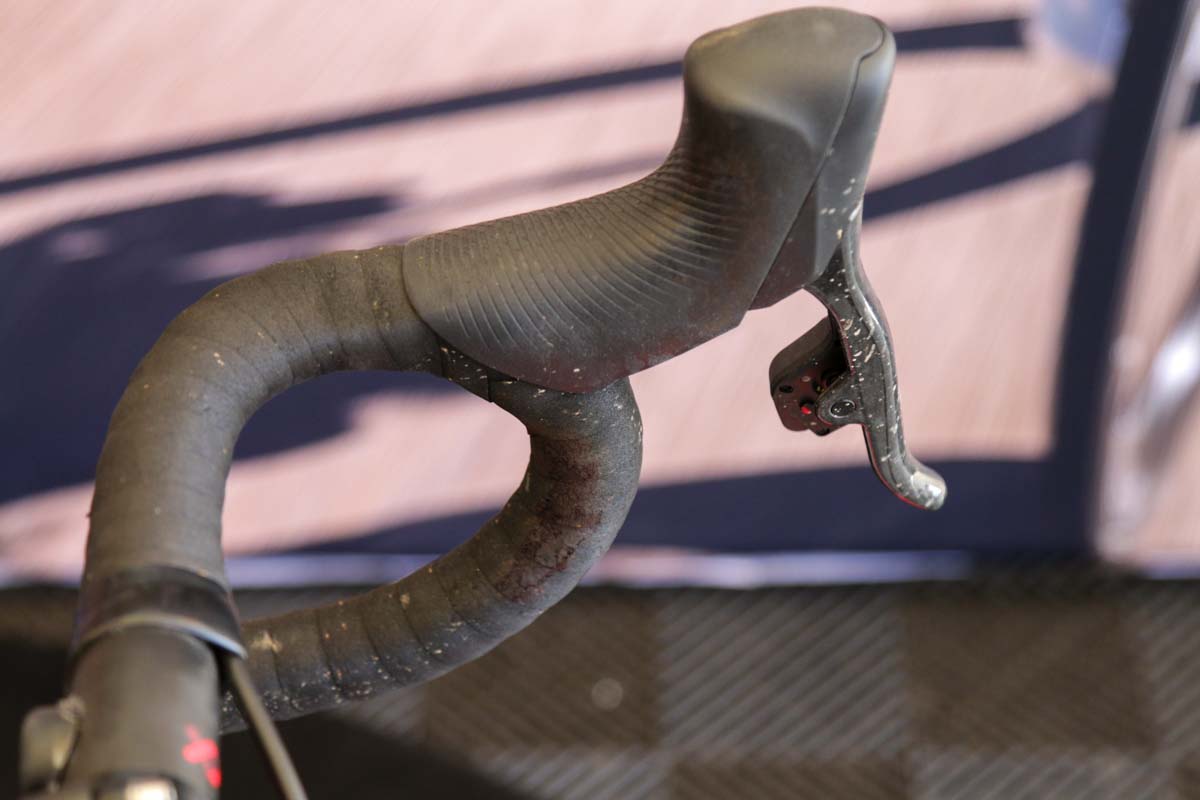 It’s always cool to see race-winning bikes like this still caked with dirt–and in this case, blood. The cobbles are unforgiving, especially at race speed. It’s said that gloves or no gloves, it can be common for a rider’s hands to start bleeding. Lizzie opted for no gloves and ignored her bleeding hands to take the victory. 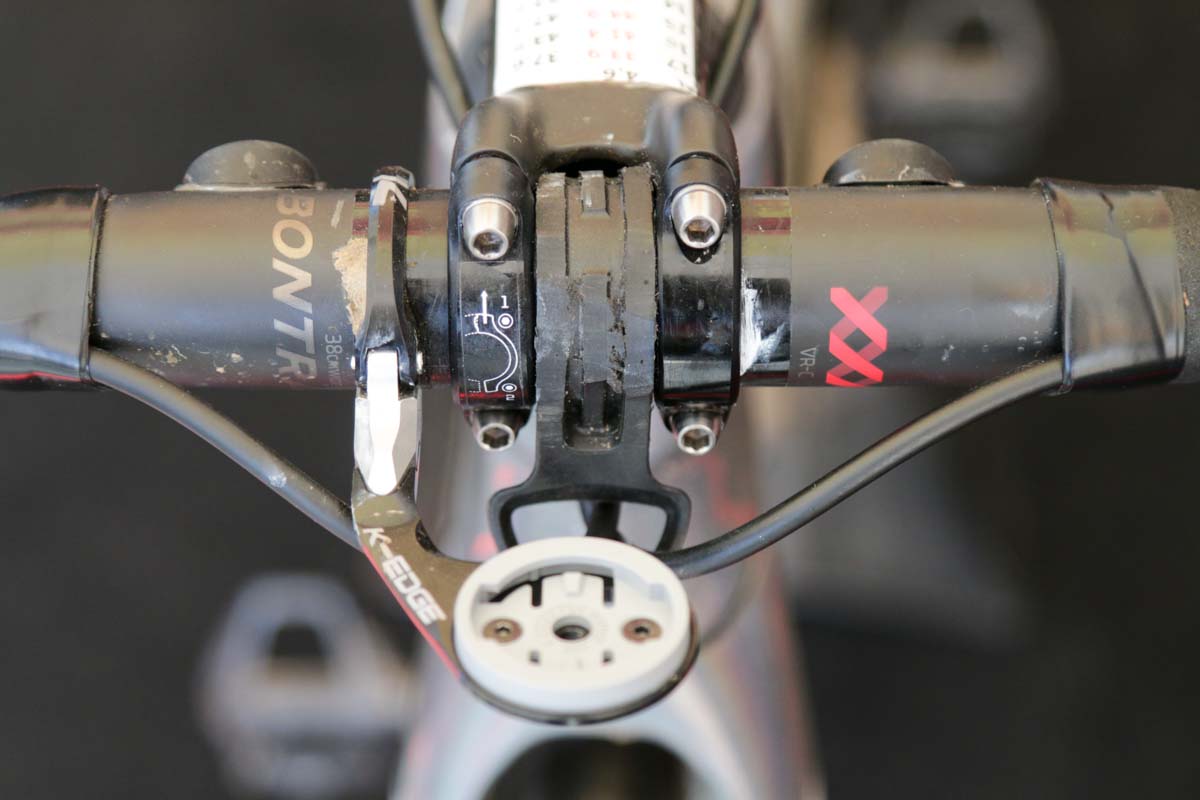 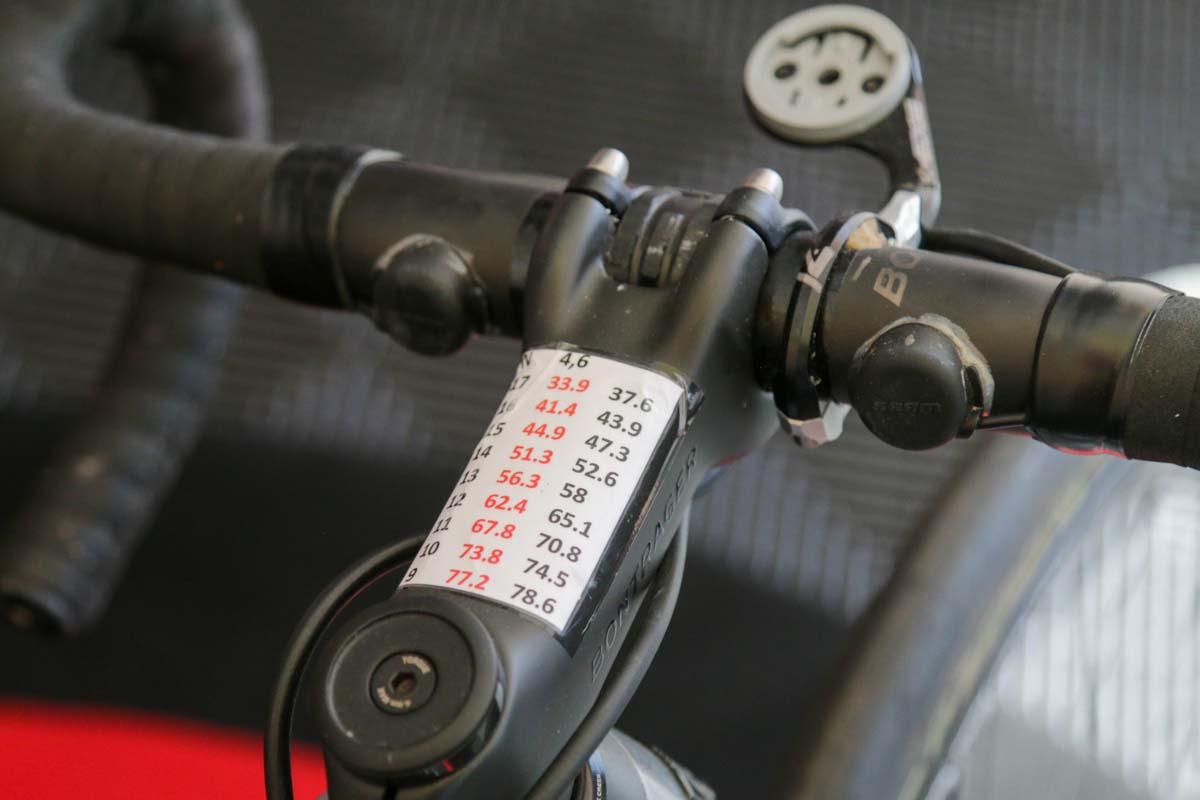 At the center of the bars, there is a custom cable hanger to keep the brake hoses tucked in tight and out of the wind. On the backside, there are SRAM Blips apparently glued to the bar next to the K-Edge computer mount. 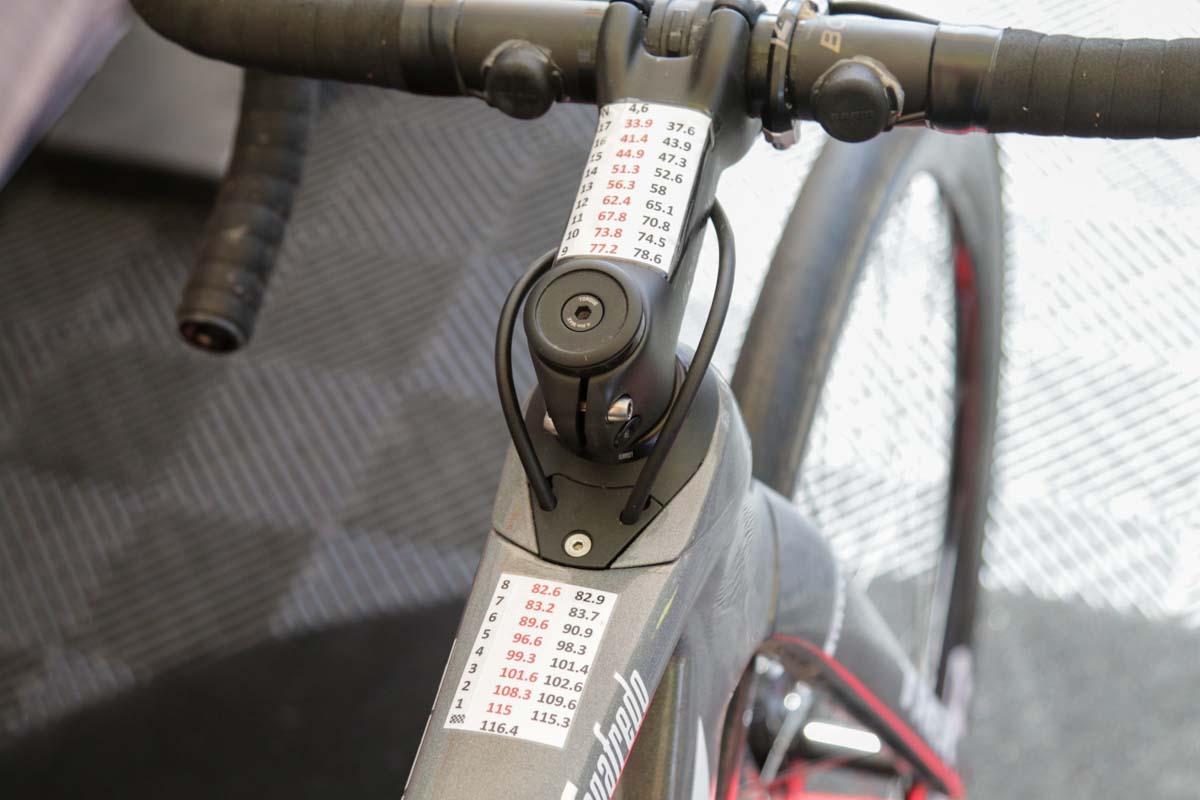 Cobble sector info was printed out and taped to the top tube and stem. 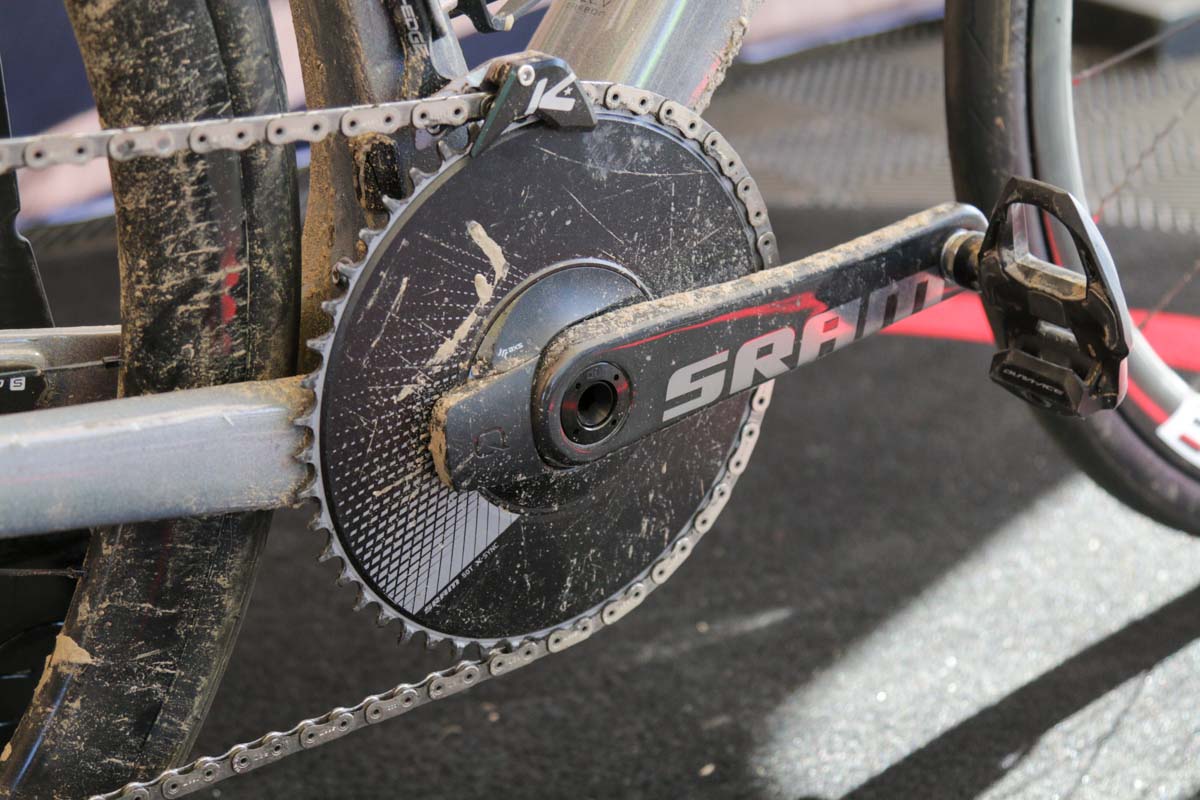 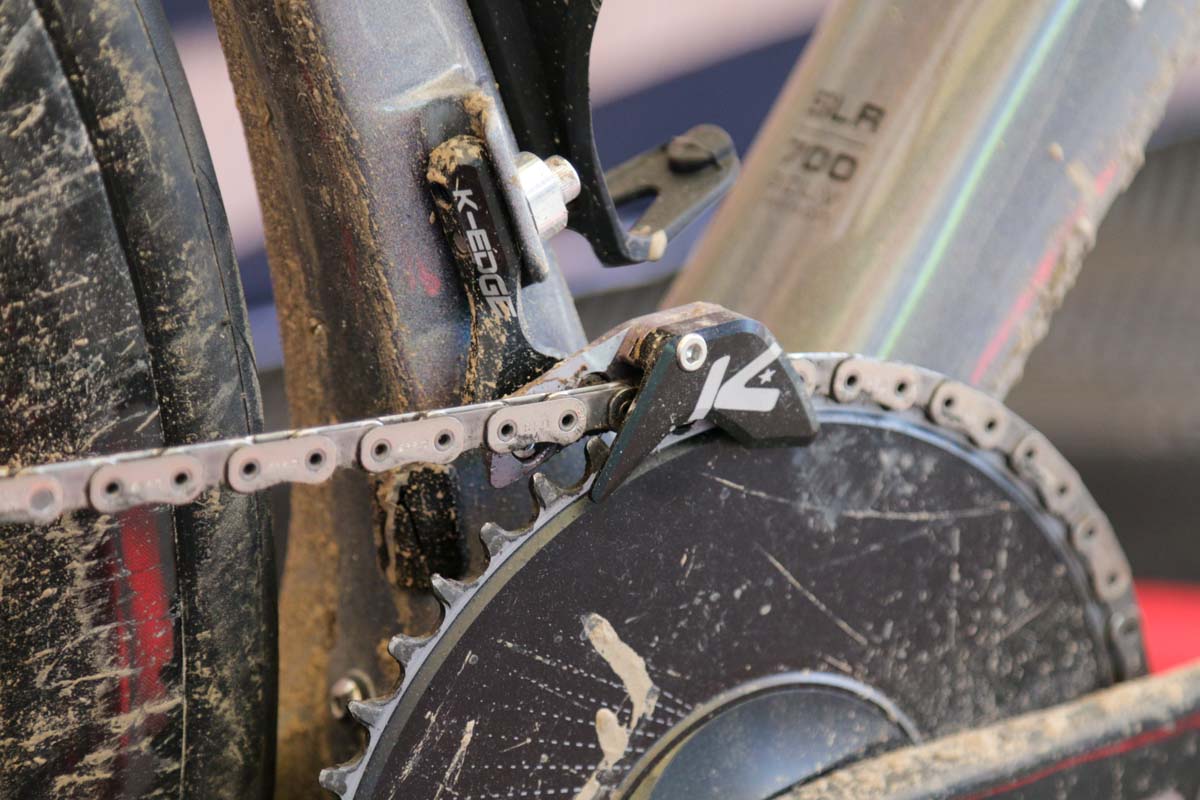 Lizzie’s setup was also notable for the 1×12 drivetrain with a 50t front chainring. The 116.4km course was fairly flat, and apparently, Lizzie wanted there to be no chance of a chain drop. The K-Edge chain guide made sure of that. 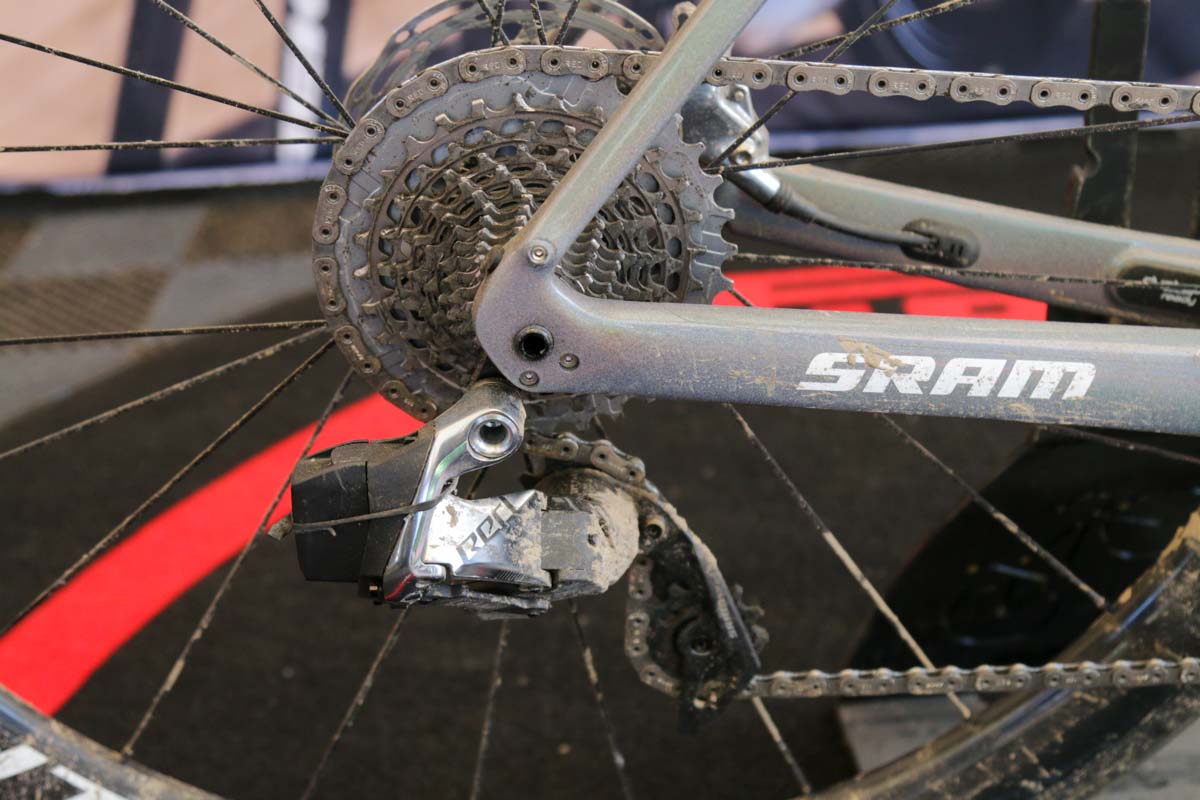 In the back, it was a 10-33t 12-speed SRAM Red cassette for a bit wider range with the single front ring. 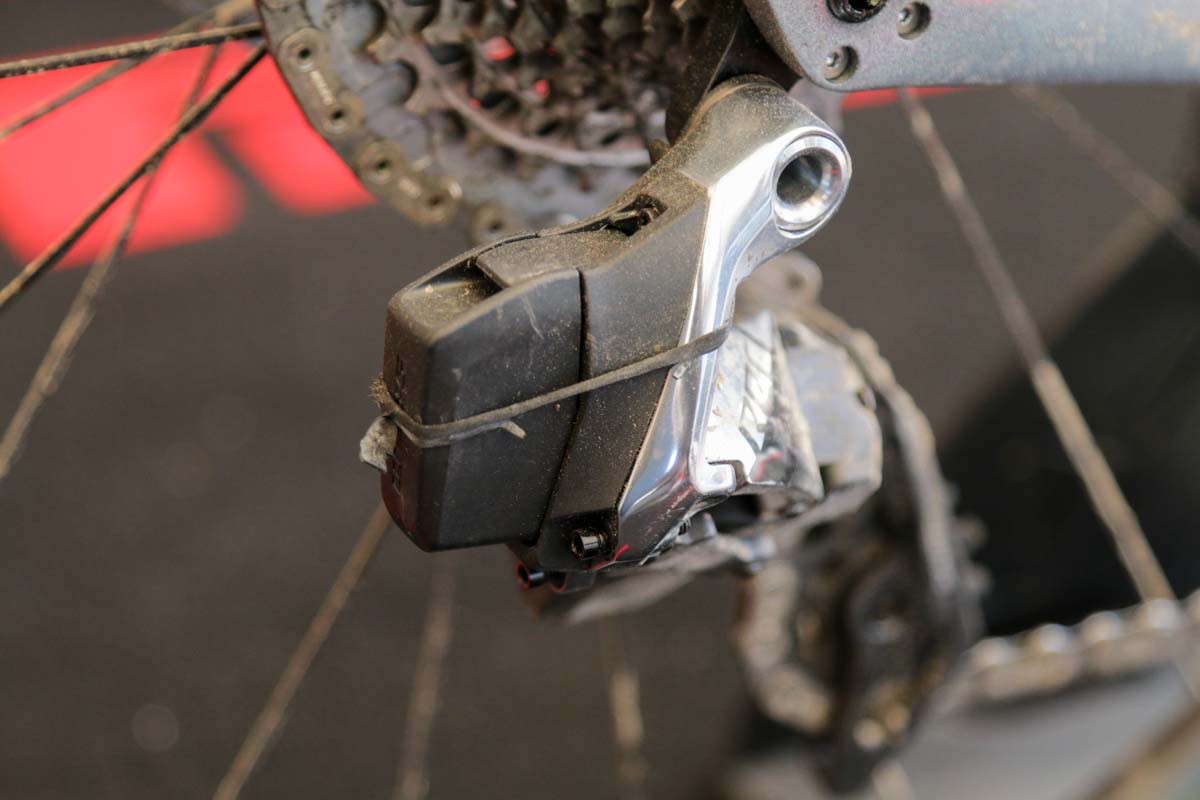 The band around the eTap battery is interesting–perhaps insurance against the battery coming loose over the cobbles? 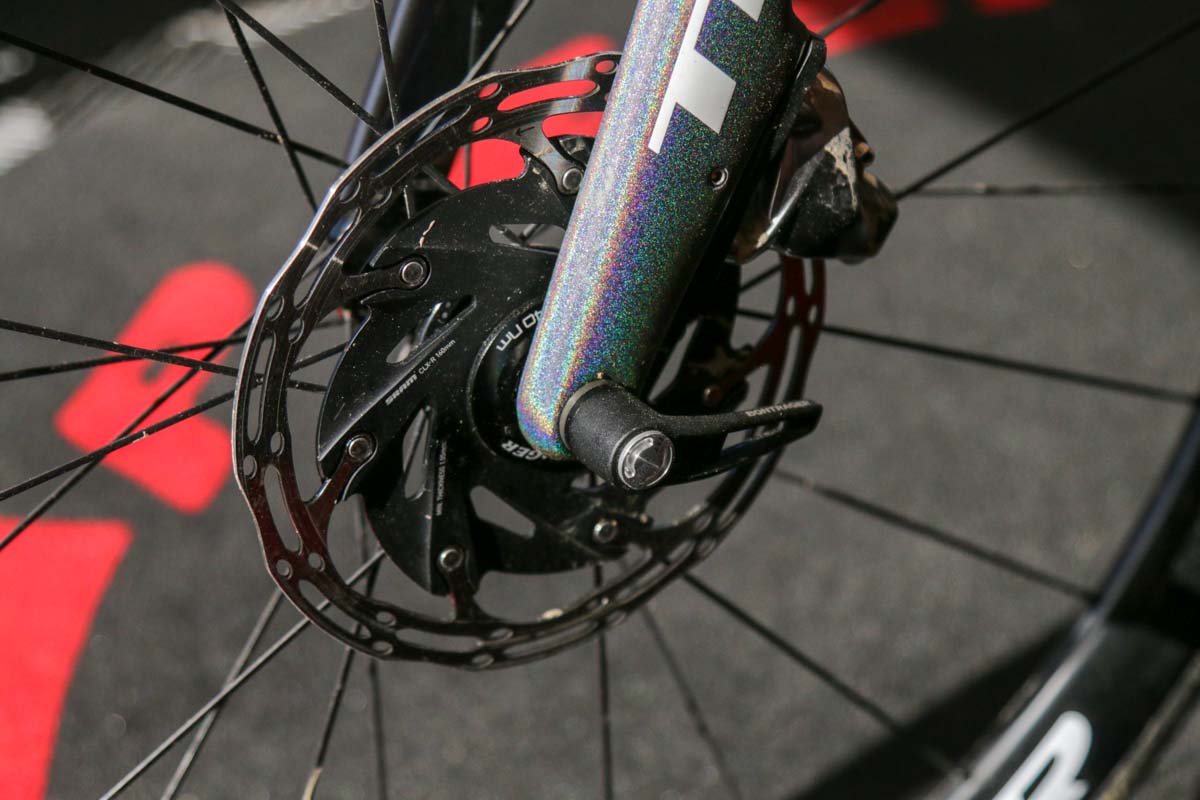 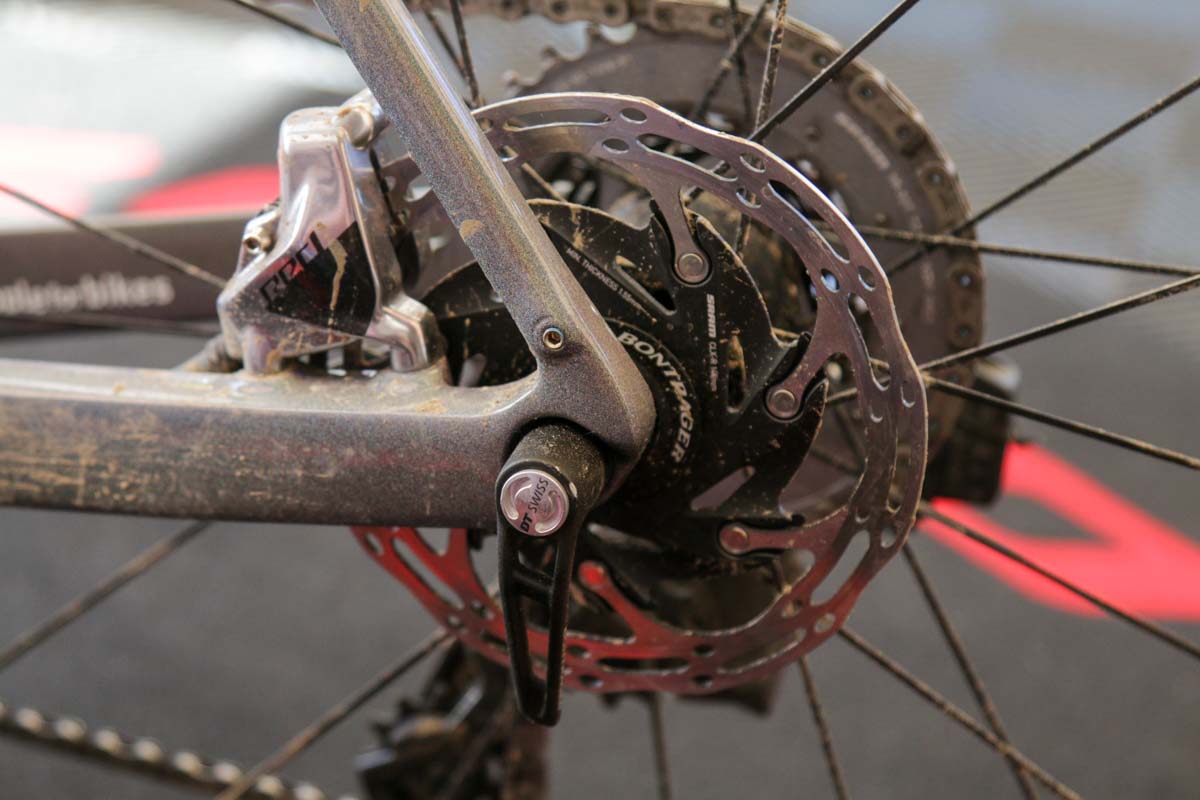 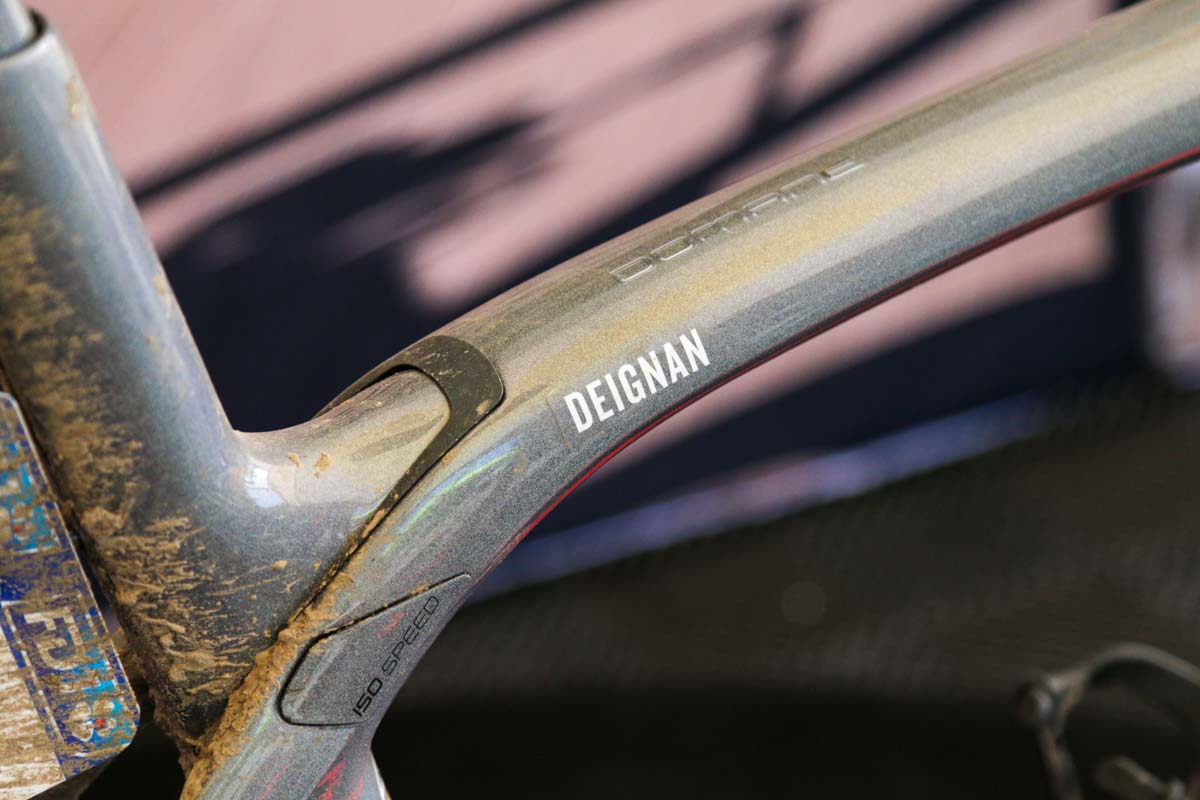 Of course all of these parts need a frame to be mounted to, and the Iso Speed-equipped Trek Domane SLR was up to the task.

Like the 2022 Sea Otter Classic taking place just months after the postponed 2021 edition, the next Paris-Roubaix Femmes is already upon us. You can catch the race this Saturday, April 16th, with the men’s Paris-Roubaix race following on April 17th.

she took that all the way to the finish e