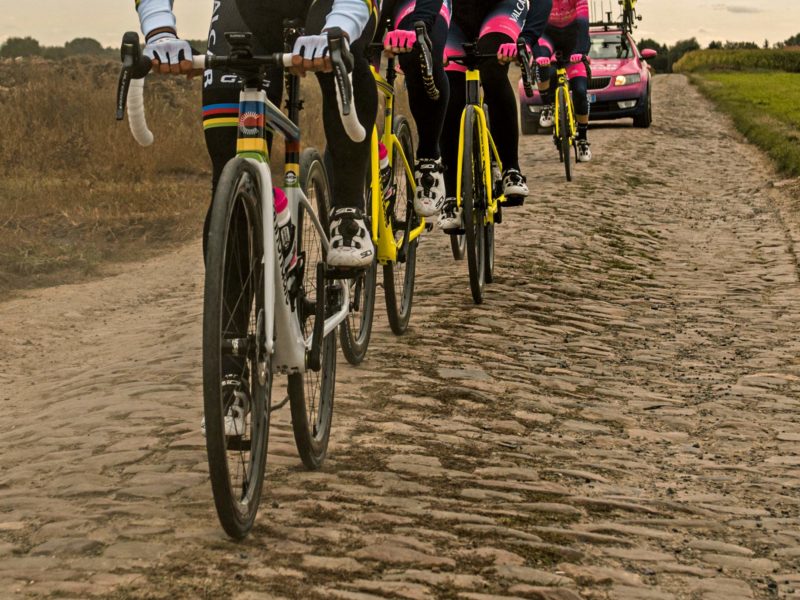 This year’s UCI Road World Champions were crowned racing over the Flemish cobbles & short, steep climbs of northern Belgium. And besides winning the honor of racing for the next year in rainbow-striped kit, both Cannondale & Specialized have outfitted their 2021 Elite Road World Champions with custom rainbow-themed aero road bikes, which they’ve already started racing.

So fitting for bikes earned in Flanders just over a month ago, it was fitting to see Elisa Balsamos leading out her Valcar T&S team over the cobblestones of the inaugural Paris-Roubaix Femmes… 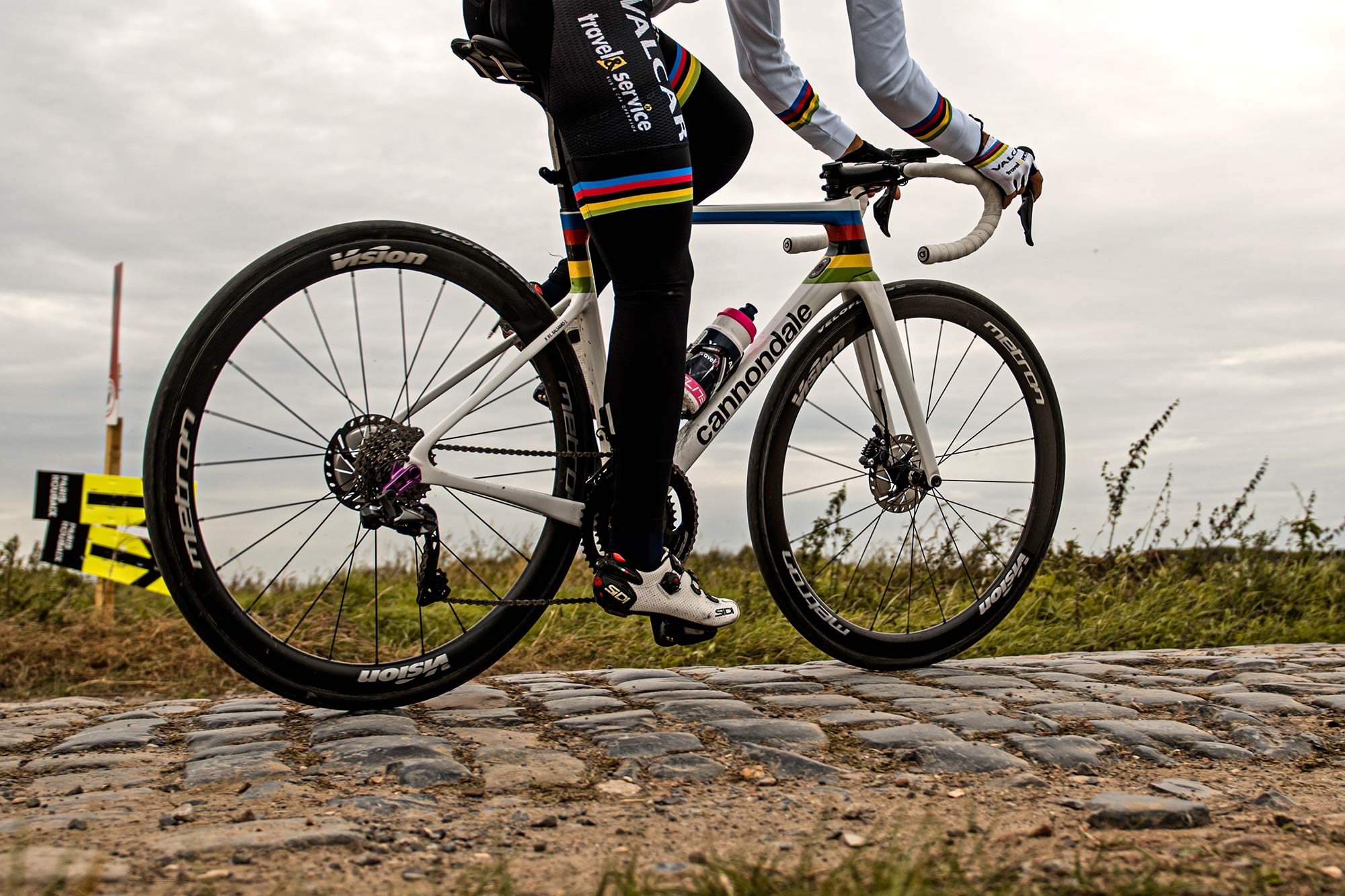 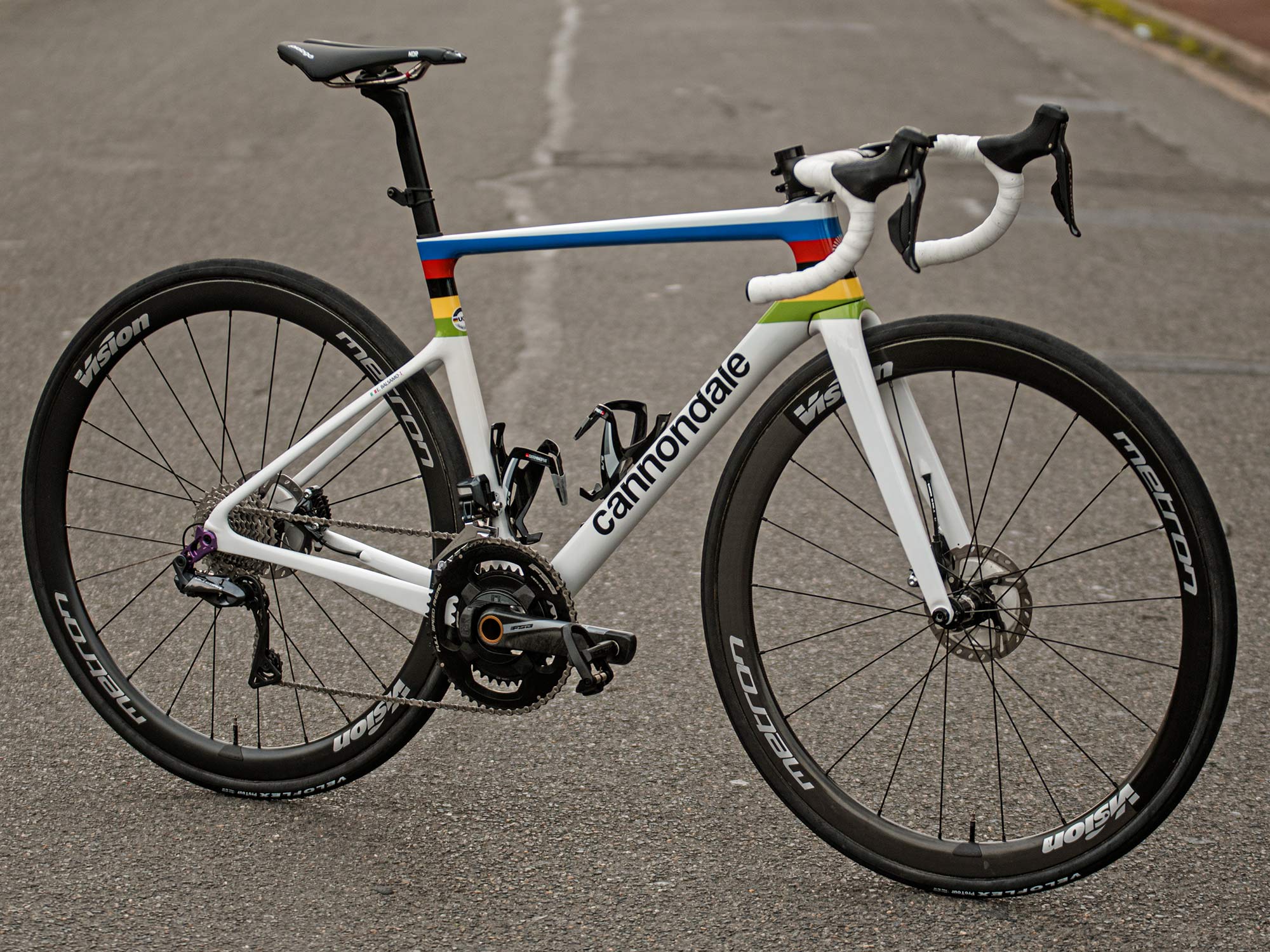 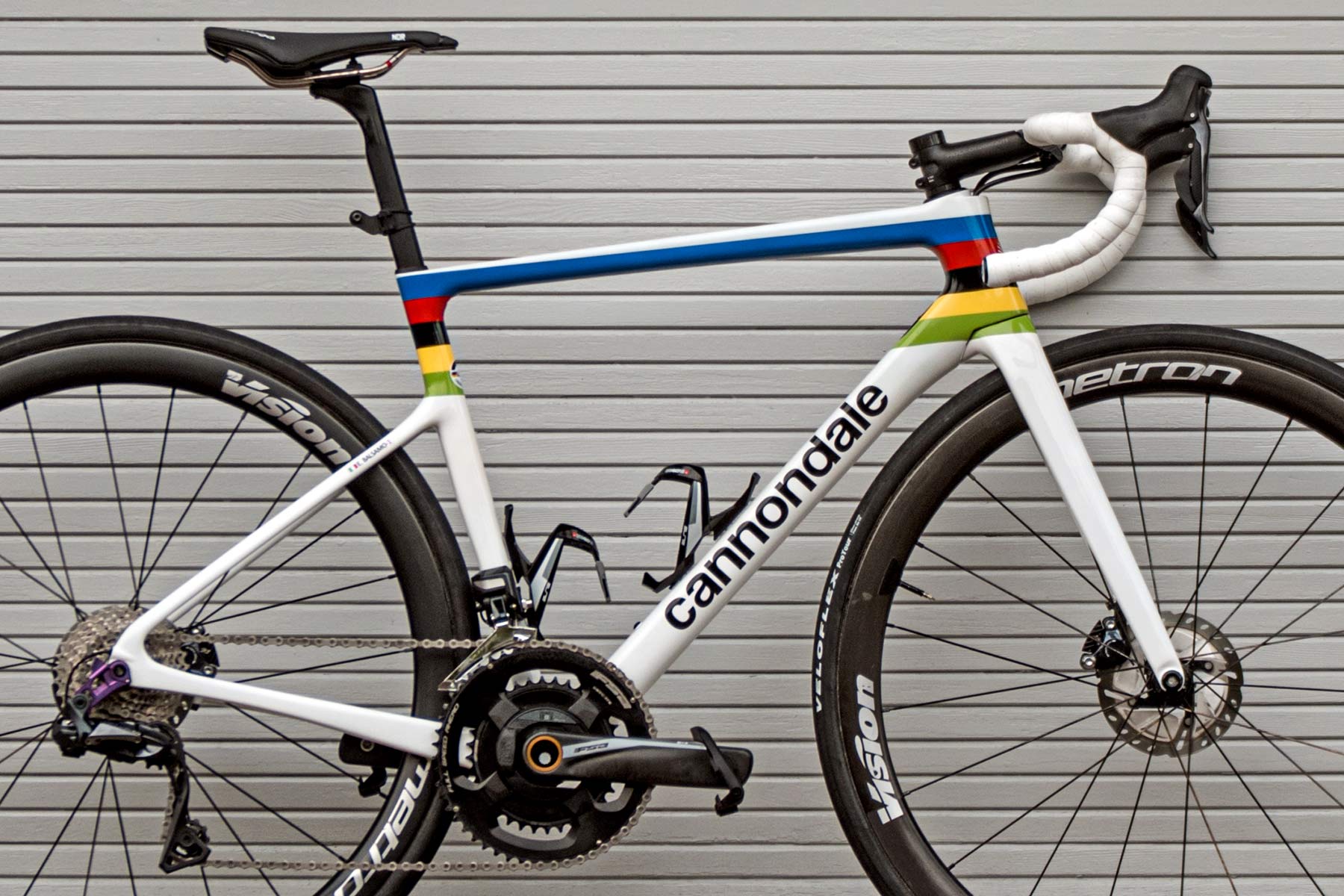 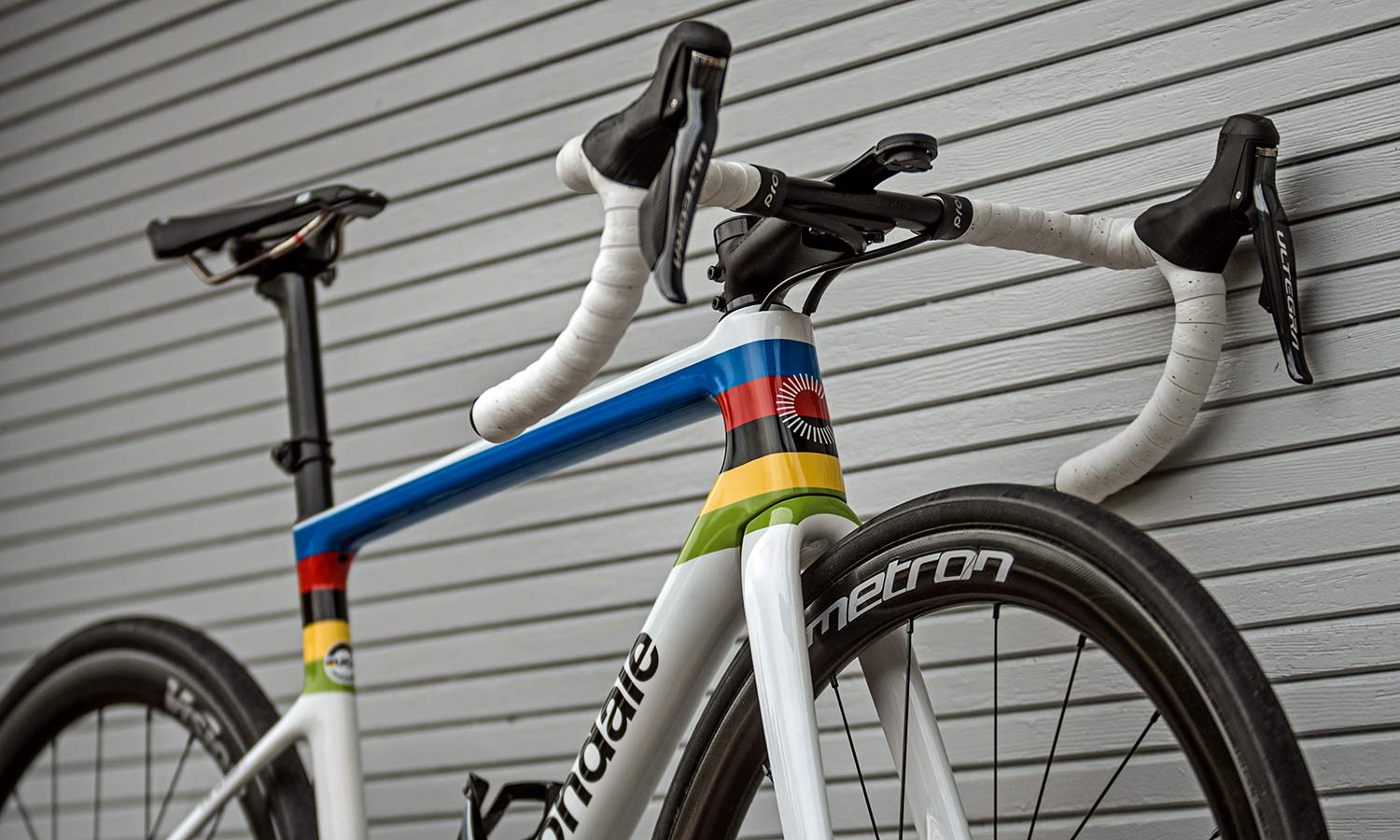 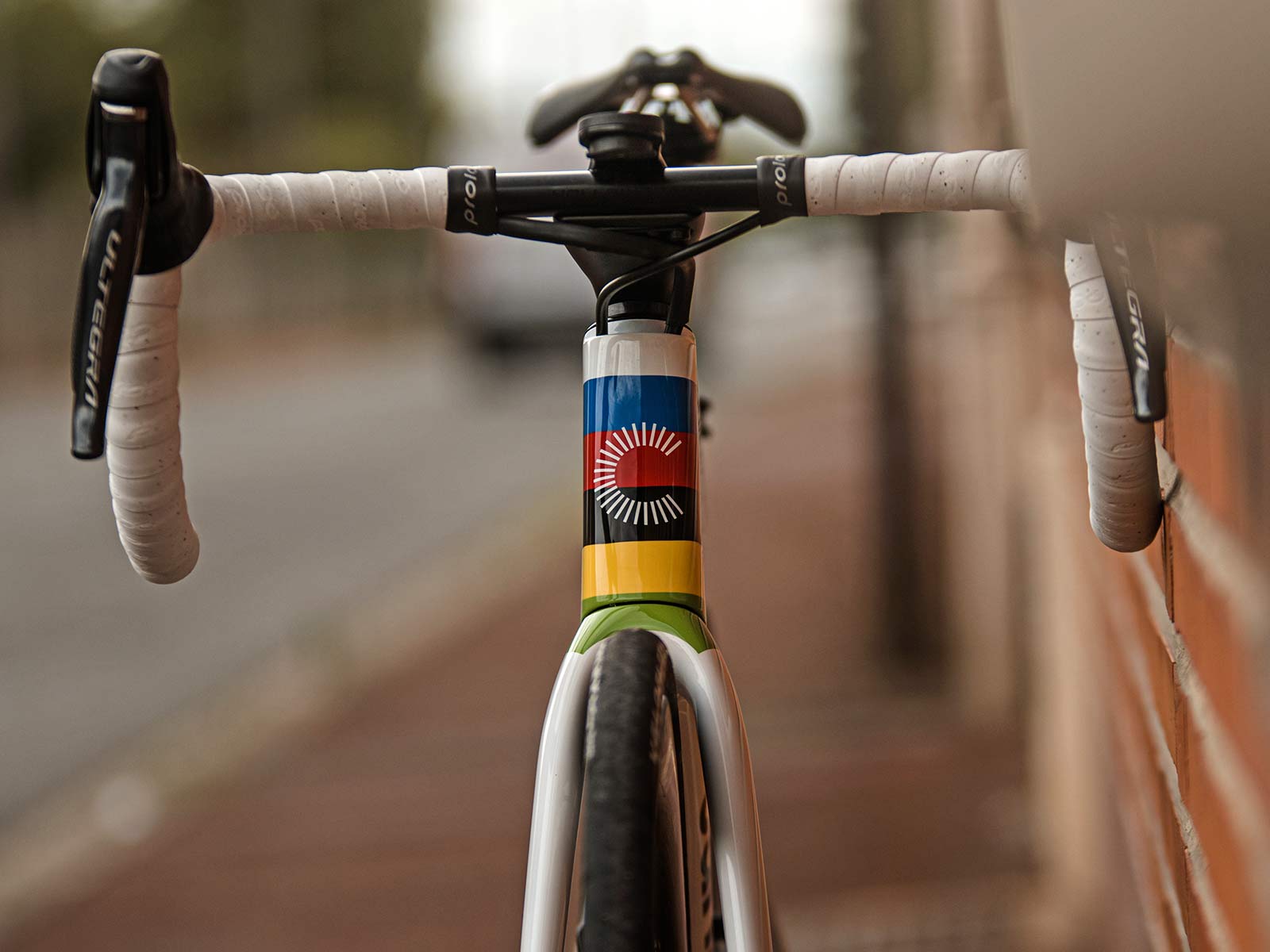 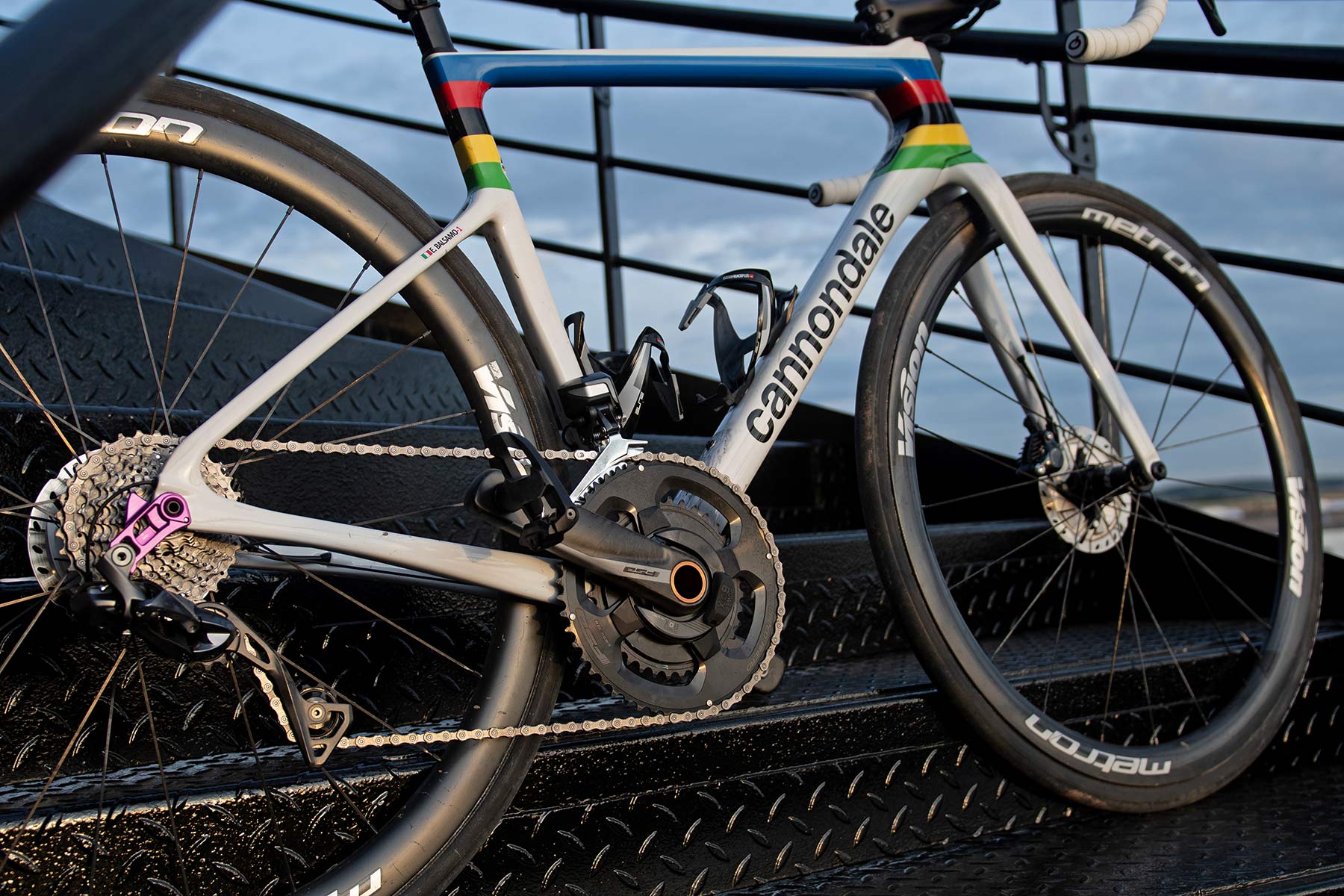 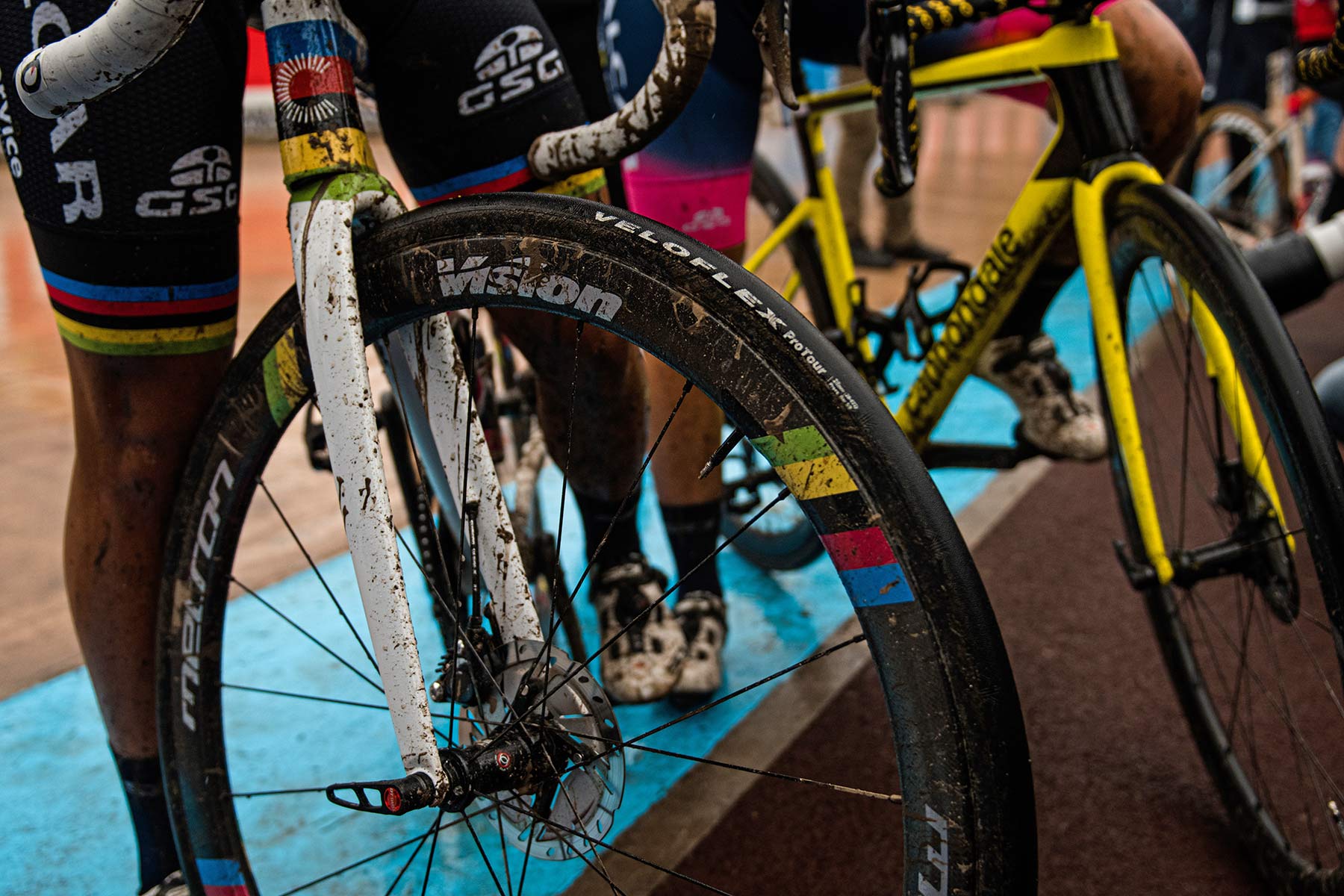 FSA/Vision also made her a nice set of rainbow graphic decals for those Vision Metron 40 SL Disc tubular wheels that she race for Paris-Roubaix Femmes. 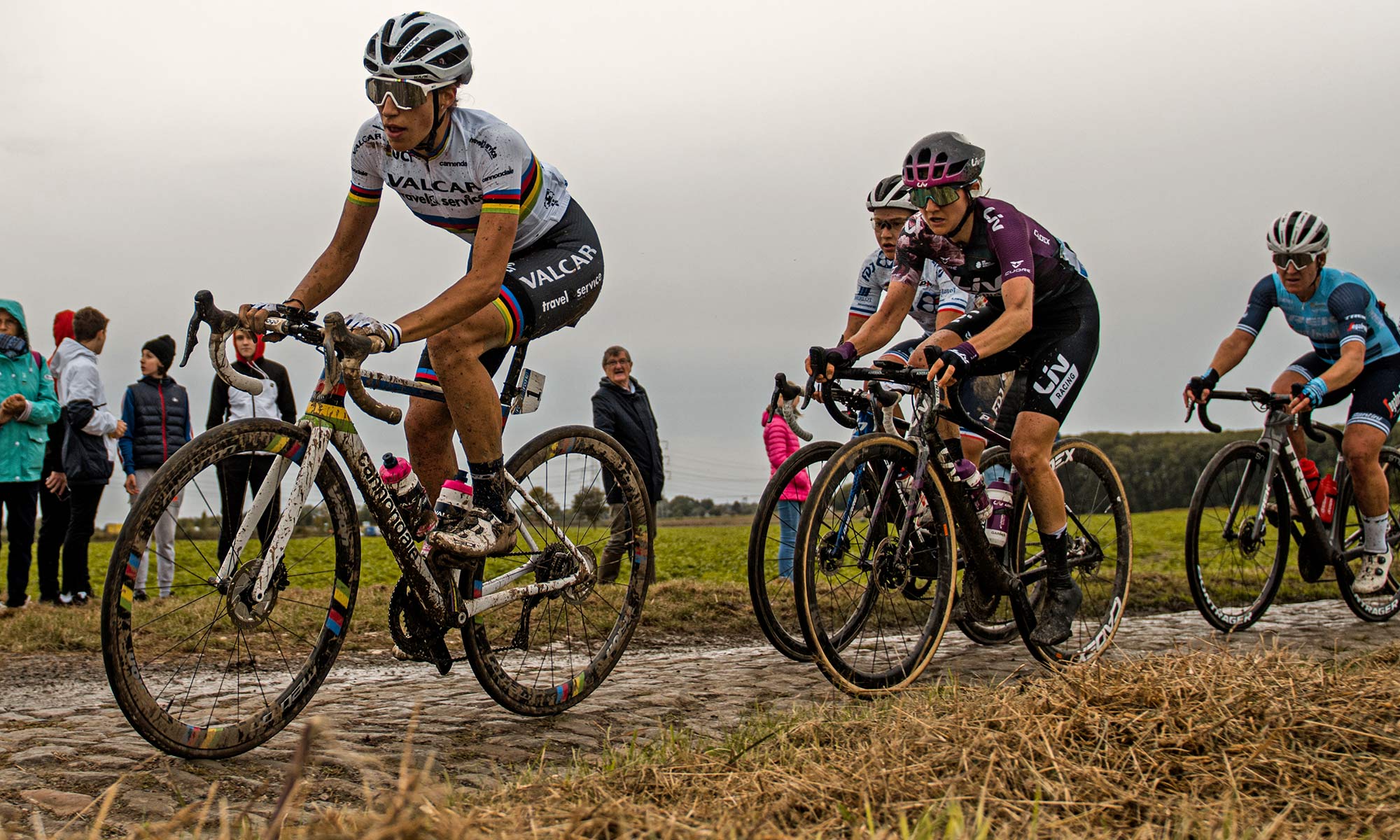 Elisa Balsamos finished out her road season with a stage win in The Women’s Tour on the new bike, after six years racing for Valcar-Travel & Service, but will move to Trek-Segafredo next season. 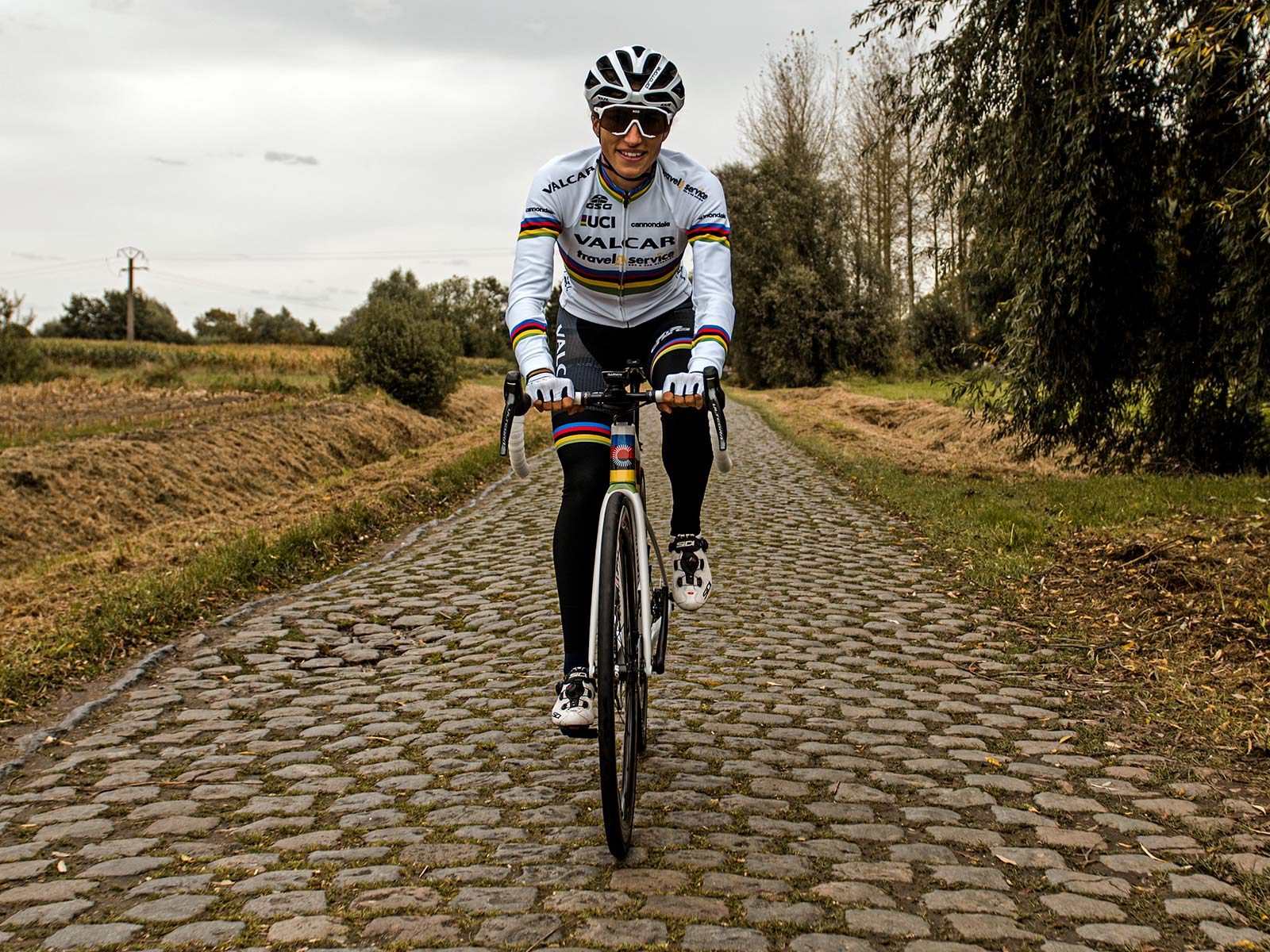 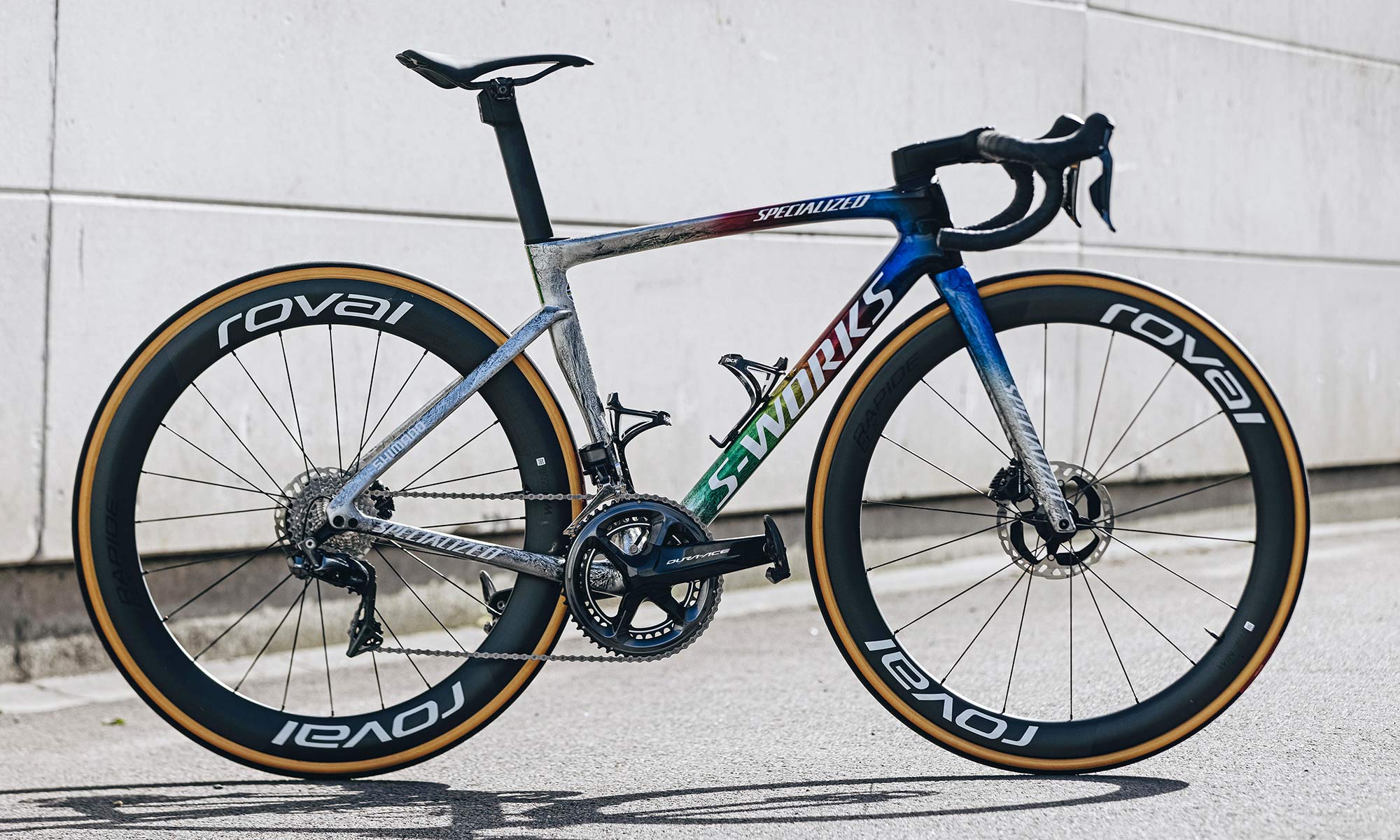 While it had been a few years since Balsamos rode in the rainbow stripes, Julian Alaphilippe came into the Flanders 2021 racing as the defending World Champ. Finishing solo in Leuven after back and forth attacks that kept whittling down the peloton, Alaphilippe earned another year in rainbow stripes. 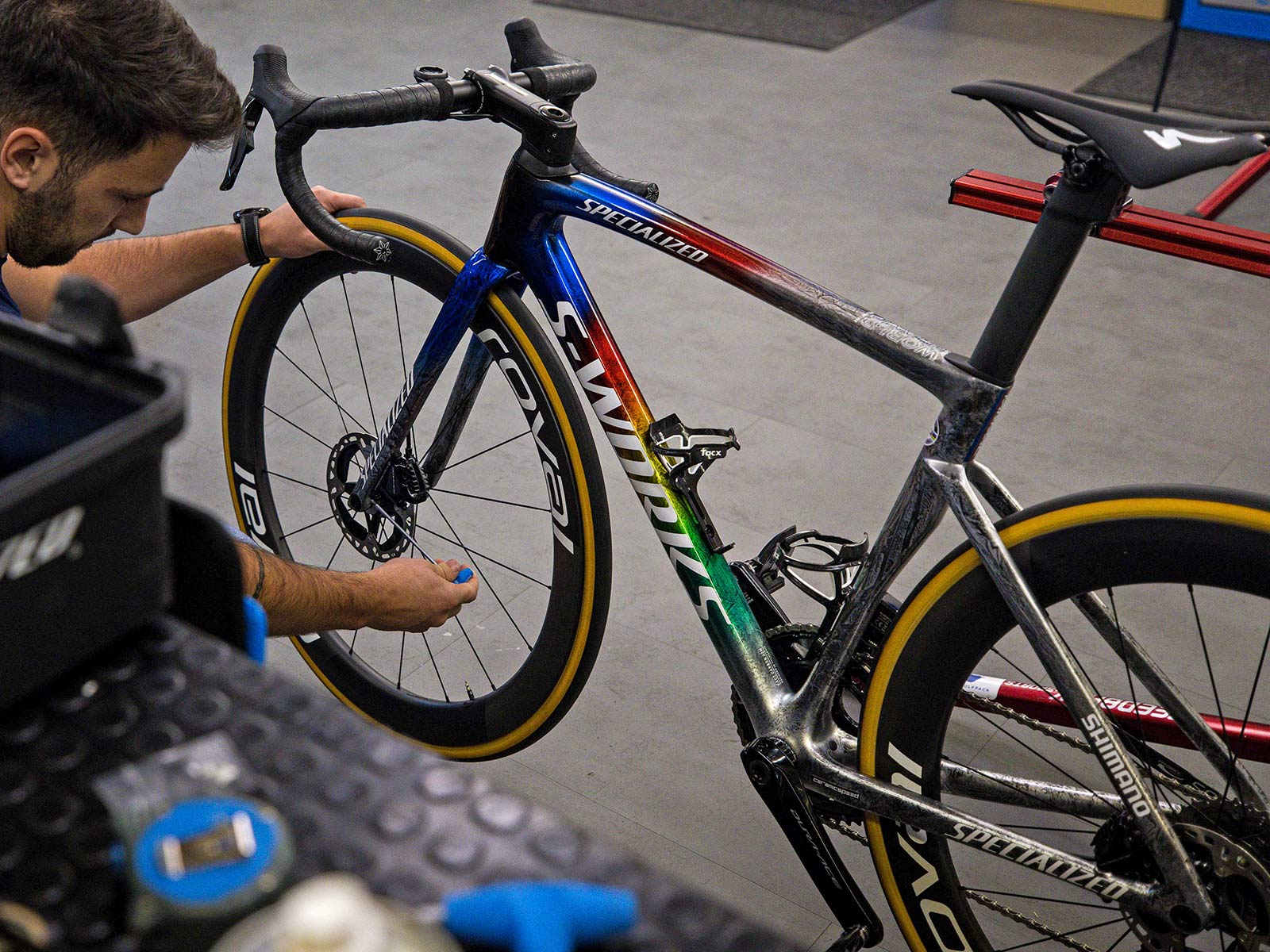 His 2021 custom bike get replaced with another new S-Works Tarmac SL7, now in a slightly flashier World Champion paint job (although he still rode a few races after Worlds on one of his older custom bikes.) 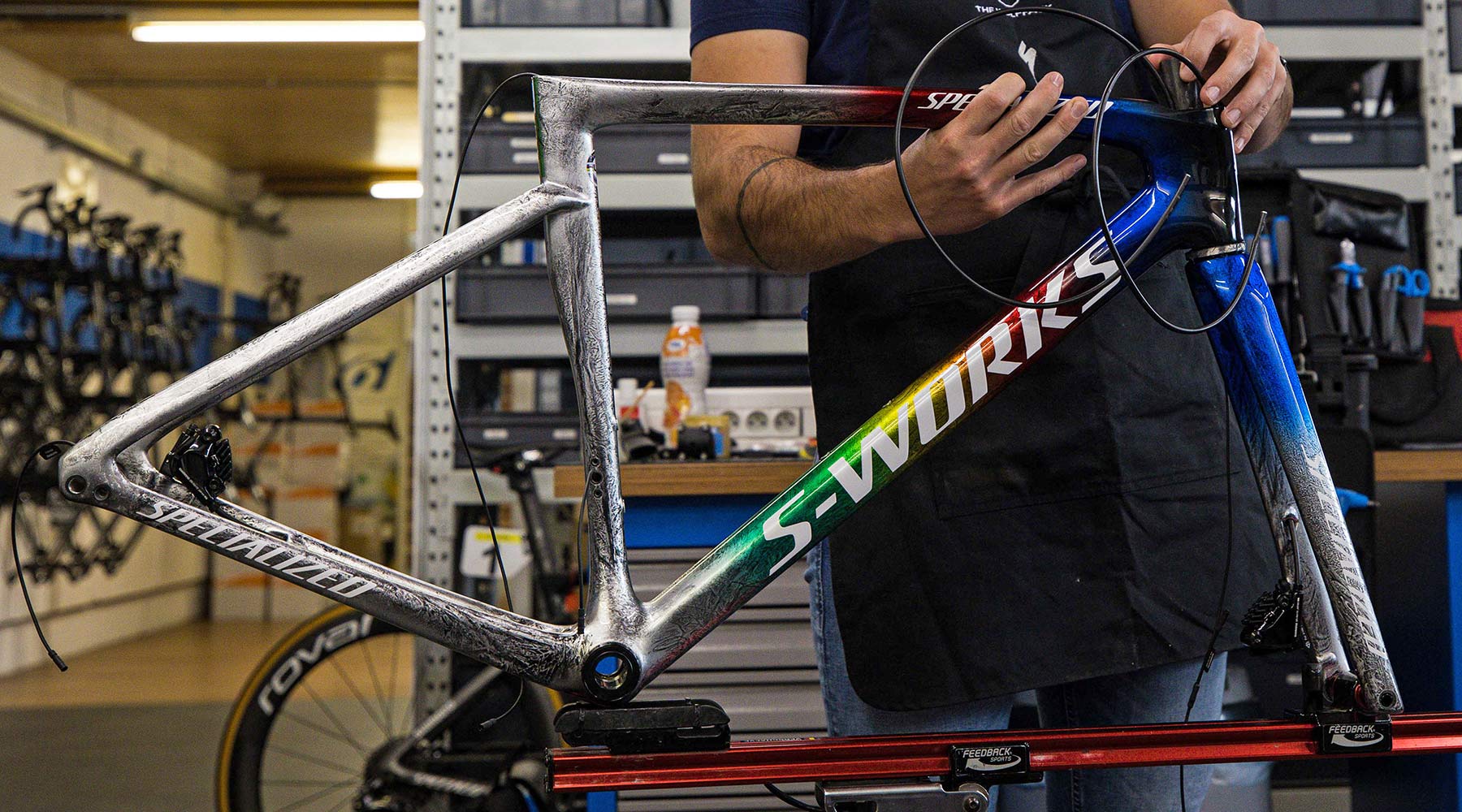 The World Champ title logo on the toptube features offset text meant to reference “that moment when all of the rider’s effort is being put into the pedals. Their vision starts to blur and their eyes cross. If you look at the World Champ toptube logo it’s offset as though their vision was starting to see double and the world champion rainbow stripes are starting to blur on the downtube and headtube… The silver granite represents the swirling of thoughts, emotions, training and everything else that goes into that one singular moment of glory as they become the world champion”, said Briggs. 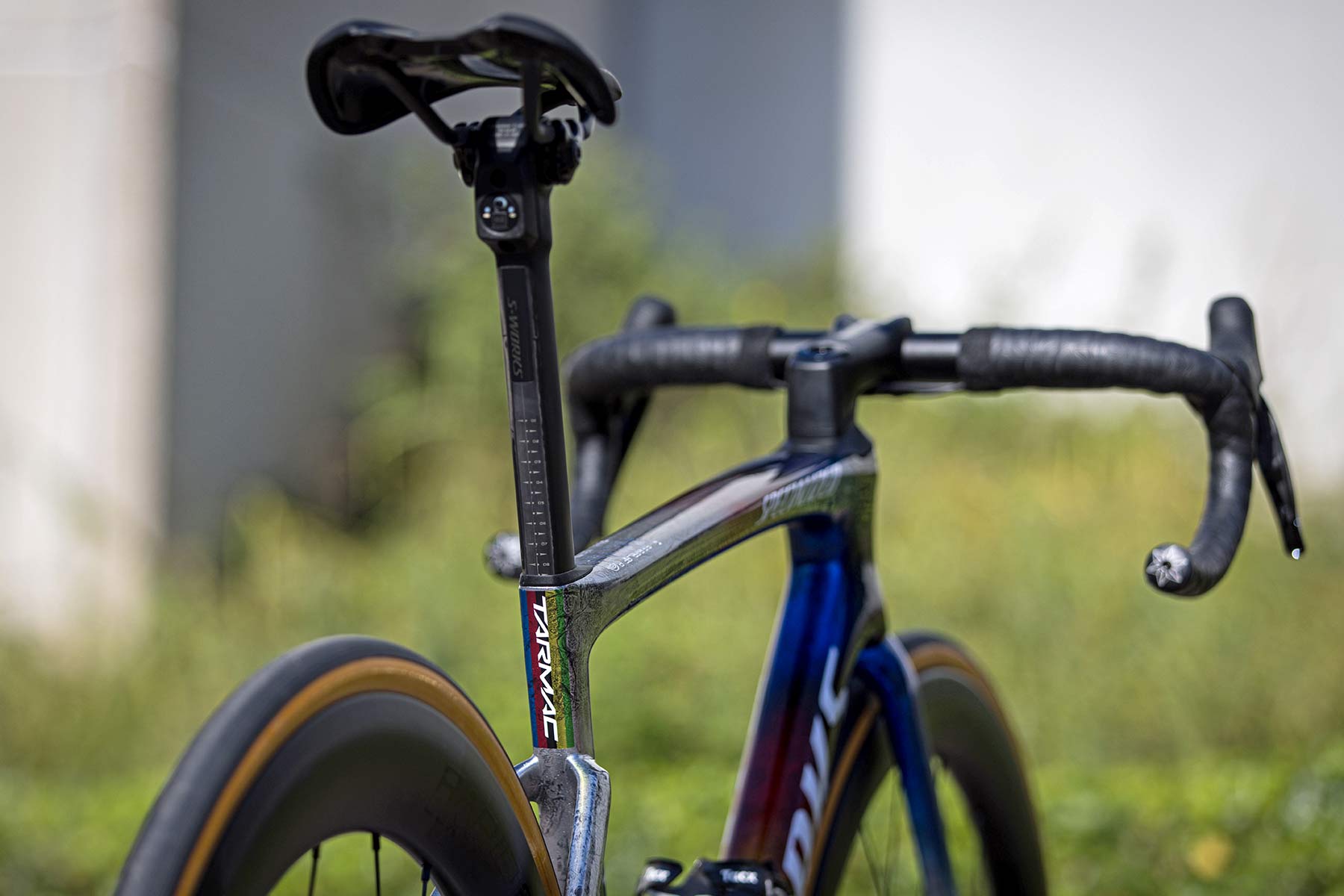 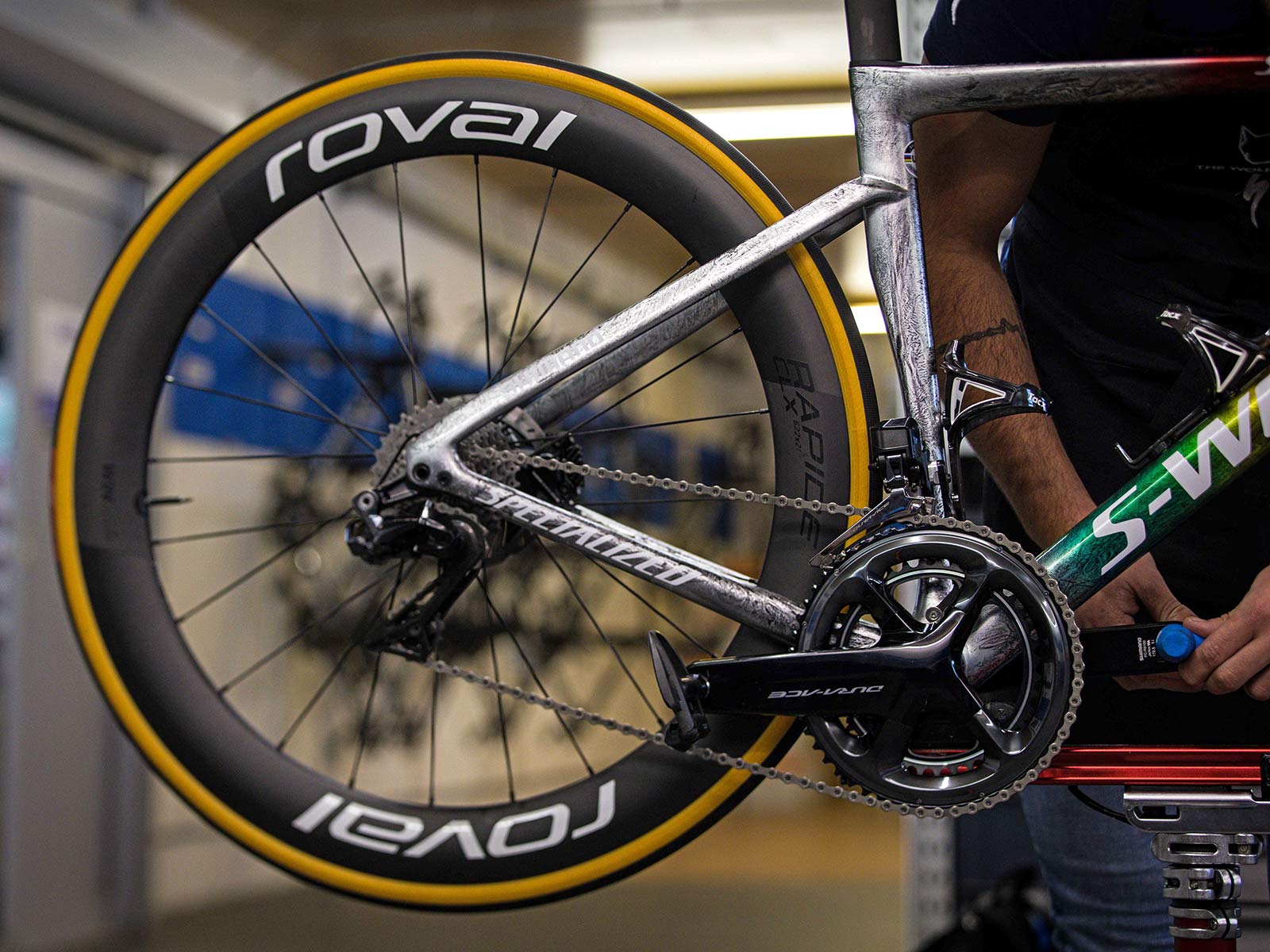 The new custom bike we’ve seen Alaphilippe racing at the tail end of this road season has also been built up built-up with previous generation 11-speed Di2, not Shimano’s newer but harder to source Dura-Ace Di2 2x12sp groupset. 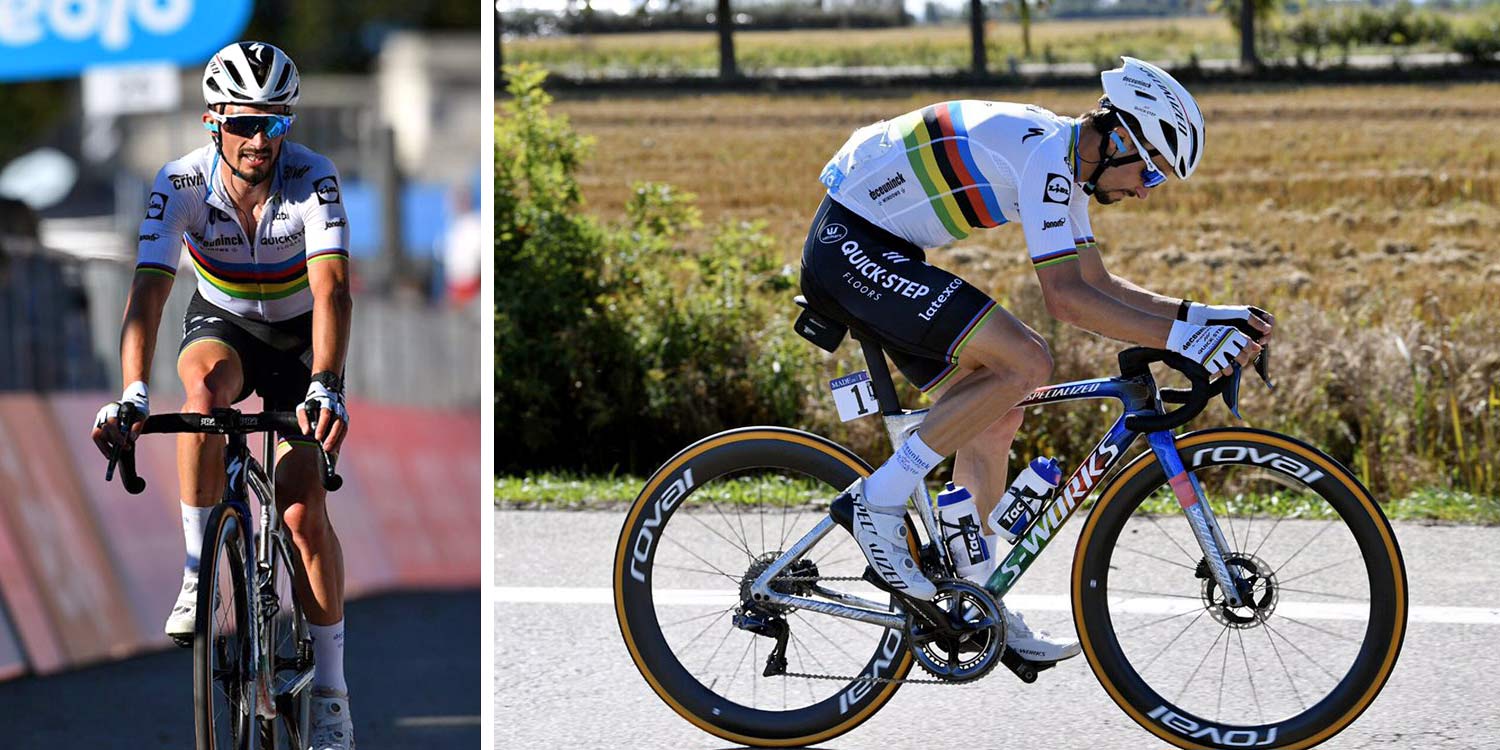 No chance in hell that Trek would put her on Madone SL. Everyone is riding SLR’s. They’re not Valcar.

You can bet that Julian’s frame and fork are not the same as you can buy….