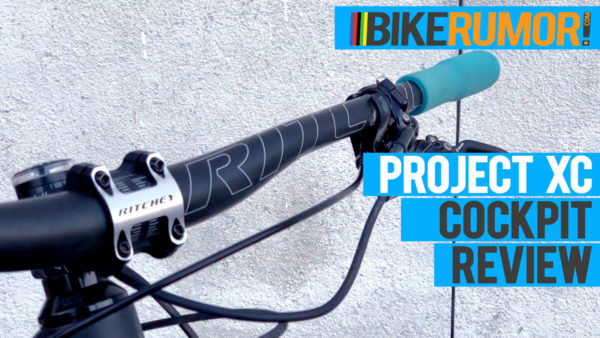 Now that I’ve reviewed the frame and fork, it’s time to dig into the parts that made our 2018 Project XC Race Bike rideable. The cockpit is the rider’s command center, and plays a critical role not just in controlling the bike, but in keeping us comfortable. For this year’s bike, we chose a Ritchey WCS Trail bar and stem, ESI’s new Fit SG grips, a KS dropper post, and a Syncros saddle. Here’s how it all came together… A few years back, I used the Ritchey Logic Trail bar, stem and seatpost for another XC build to race the TranSylvania Epic, and it performed quite well. In fact, I’m still running that cockpit on my bike almost five years later and have had no issues. So, when it comes time to choose a reliable, bombproof but lightweight setup, Ritchey is often the first brand I think of.

Recently, they’d updated their WCS Trail parts to be bigger and wider, helping them keep with the times. The current WCS Trail bar is a massive 800mm wide and uses a 35mm clamp diameter. It comes with a 15mm rise, 9º backsweep and weighs in at 210g. As predicted, this bar performed perfectly, though it is a bit too wide for an XC bike. Even for a trail bike, I’d cut this down to 780mm. For XC, I’d go as narrow as 760mm.

On this build in particular, the extra width offers plenty of control, but at the expense of bent elbows. And bent elbows help absorb shock, which is something I could have used more of considering the lack of suspension travel. But, as with the old versions, these bars have a commendable amount of flex to help soak up hard hits and keep them from fatiguing your muscles. Personally, I’d love to see these bars offered in a 760 or 770mm width that was laid up and tuned specifically for that shorter size, and for shorter travel XC bikes. But even as they are, I’d recommend them highly, and they’ll be going on other bikes for years to come. The WCS Trail Stem is a perfect counterpart to it, not only matching the aesthetics but offering Ritchey’s unique 220º opening. That provides just a bit of extra security when attaching the bar, though it take just a bit longer to install. Our review stem was the 60mm length and weighed in at just 138g. That’s reasonably light, especially for a “trail” worth stem that’s torsionally very stiff. At the time I built this bike, ESI had just launched their Fit SG foam grips. They have a tapered design to offer better bar feel around the levers, but more cushioning under the meat of your palms. They’re comfortable and offer good control, but for this particular build there was not enough padding to make up for lack of suspension.

If you’re a fan of thinner grips for control but still want good padding, these could be just the ticket. They come in a ton of colors and fairly simply to install. Mine haven’t slipped or moved since installation, nor are they showing any signs of wear, and they weigh a mere 64g with plugs. Originally wanted to test one of KS Suspension’s lightweight carbon LEV Ci models, but their short travel posts also have short total heights and wouldn’t allow enough extension to fit me. So, I swapped for a 125mm KS LEV Integra that I pulled off one of my other bikes, and that allowed enough extension to get my saddle height correct.

Overall, I’ve had no performance issues with this dropper. Cable mechanism is a little finicky to get setup, requiring small fingers and lots of dexterity, but once the little ferrule is on there, it hasn’t moved. The nice thing is, their internal (aka “stealth”) routing droppers have a shared cable attachment method, so you could theoretically have levers on multiple bikes and just swap the post between them. There’s a Schrader valve under the cradle that lets you adjust air pressure to tune the return speed, too. KS offers various levers, including a new design coming out in 2019, but my choice was the under-bar thumb lever that mimics a shifter lever. Lever feel is good and offers easy modulation and control. My only real nitpick is that the saddle tended to slide rearward throughout the race despite having it well clamped down. It comes in four diameters and four travel lengths, meaning there’s almost certainly a post that’ll fit you and your bike. Just see my notes below on saddle use… I won’t spend a ton of time on this because Syncros is in the midst of revamping their entire saddle line. And, honestly, this was a last minute sub. I had planned on running a Prologo mountain bike saddle, but the KS post’s stock clamps wouldn’t accommodate the taller 7x9mm carbon rails on the Prologo. Actually, it was really the clamp’s bolts that weren’t long enough to provide enough purchase for me to feel comfortable, not the actual clamp cradles. So, if you plan on running a carbon-railed saddle, make sure you ask KS for the longer bolts.

Syncros’ FL series has been in the line for a while, and while they’re reworking their lineup, this model is still available and worth a look. It’s narrow, and it’s light, but they do offer various sizes in some models. Best thing I can say about it is that I didn’t hate it after 5+ hours in it over rough terrain on a hardtail.

Check out the original post on these parts for more tech details and actual weights.