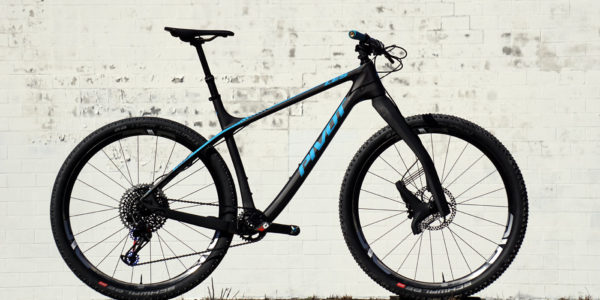 I don’t ride hardtails anymore, so here’s how this came about: Our friends at Lauf said they were racing their True Grit gravel bike at the NUE season opener, coincidentally called the True Grit Epic. And they’re sponsoring the race. So they thought it’d be fun if we came out and raced with them. But I’m not going to race a gravel bike on a self-proclaimed “tough and technical” 50-100 mile mountain bike race.

So I’m building this hardtail: 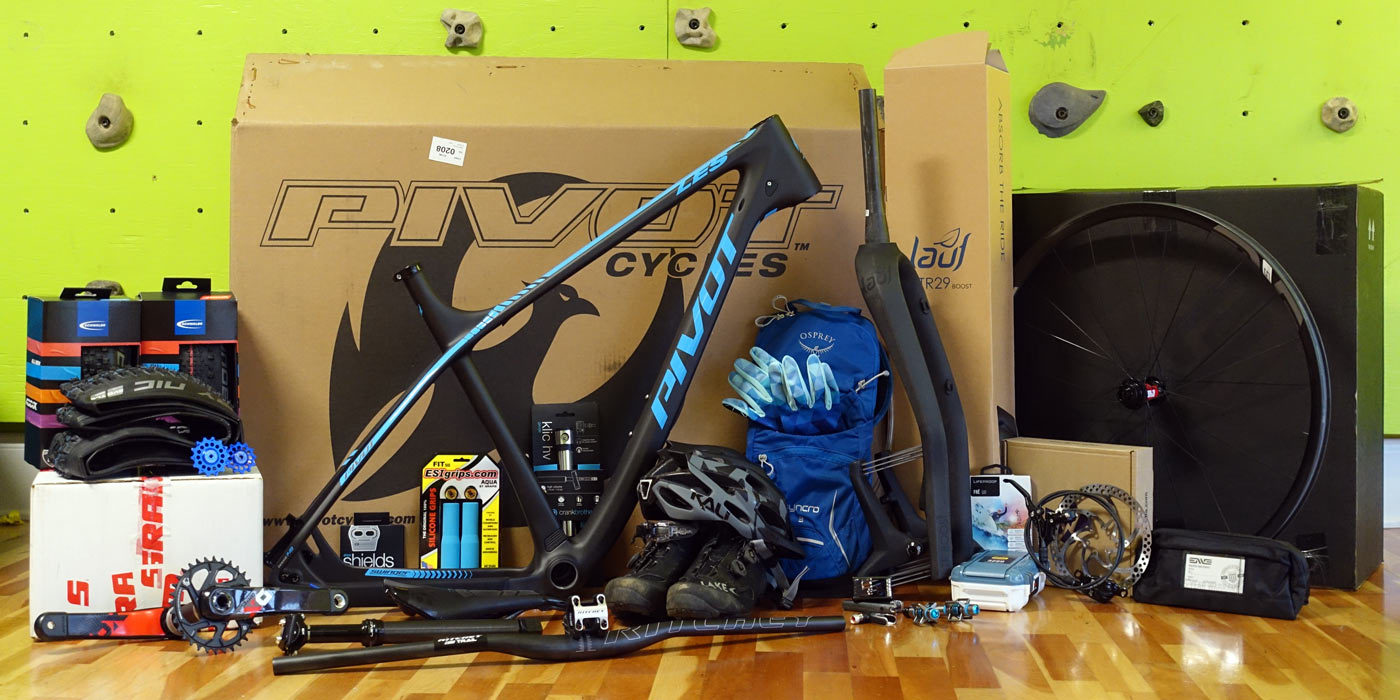 Considering Lauf’s invitation, I felt obliged to run their fork. And I hadn’t really ridden their newer TR Boost 29er fork, which is stiffer than the original I used for our first XC project bike a few years ago. Perhaps the best part of this story is that the bike is now built, boxed and en route to UT via FedEx Ground without ever having been ridden. If all goes to plan, I’ll show up in UT on the same day it does, sealant will be added to the tires, and we’ll roll out to explore the course. Two days later, we’ll be “racing” it for 50 miles.

In the meantime, I’ll detail the parts, build and actual weights all week long, starting with… 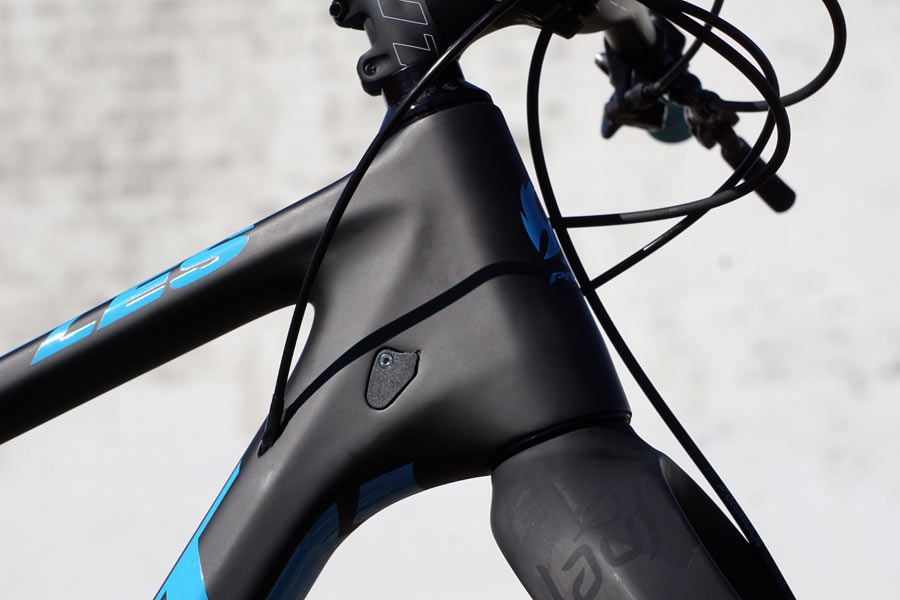 The frame has ports and bolt-on port covers to handle 1x, 2x, and dropper posts. The rear brake hose is run through the top tube, popping out just in front of the seat tube with another bolt-on cover. The forward brake hose port, however, is merely a hole, which proved troublesome. Most hydraulic brakes disconnect at the lever when you need to shorten the hose, which I needed to do for this build. Which means you need to feed the hose in from the rear’s larger port, then get it to poke through the smaller port. Despite using Park Tool’s cable install tool threaded into the hose to pull it through, I simply could not get it to come out. After very carefully drilling out the inner edges of the hole to enlarge it slightly (maaaaybe 1-1.5mm max…sorry Chris), the hose finally came through. Yes, this would probably void any warranty. No, you should not try that at home. But that’s what needed to happen.

(Better: After talking with Pivot founder Chris Cocalis, he suggests sliding an unused piece of cable housing or hose from front to back through the top tube, then using the included threaded connector to attach that to your brake hose, then pull it through. This method lines it up with the hole perfectly, where as the Park Tool guide does not – and he had the same experience I did. He also mentioned that they’re working on assembly videos for their website, so stay tuned for those. Or just have your bike shop build it for you, except it’s still good to know how to work on these things if you’re out enjoying the #vanlife in the middle of nowhere.) 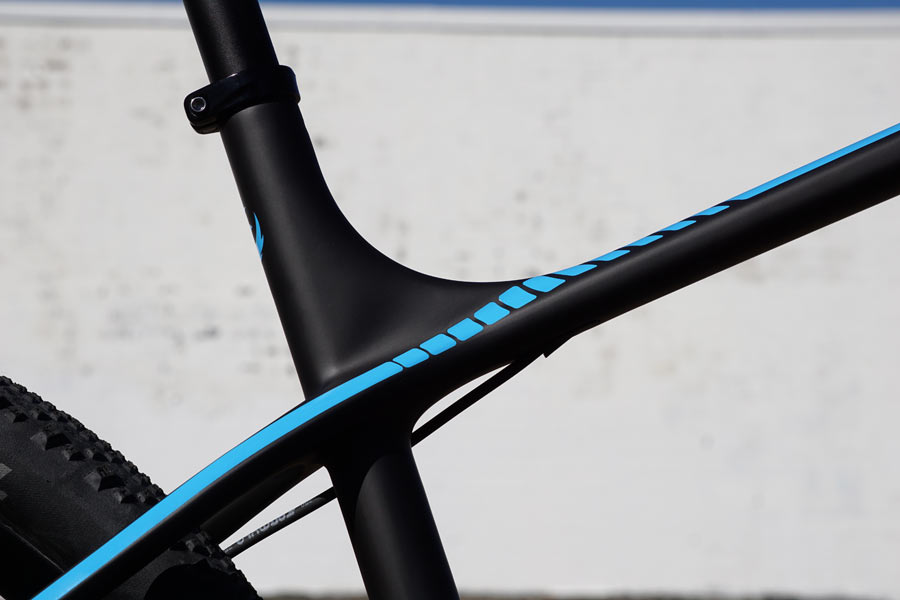 After that, the rest of the build went fairly smooth. In my opinion, the lines on the LES are much prettier than the Mach4. Looking purely at the numbers, the XL (tested) has a very long top tube, but it fits very well. The sloping top tube means a lot of seat tube up top, but the curve up front reinforces it. 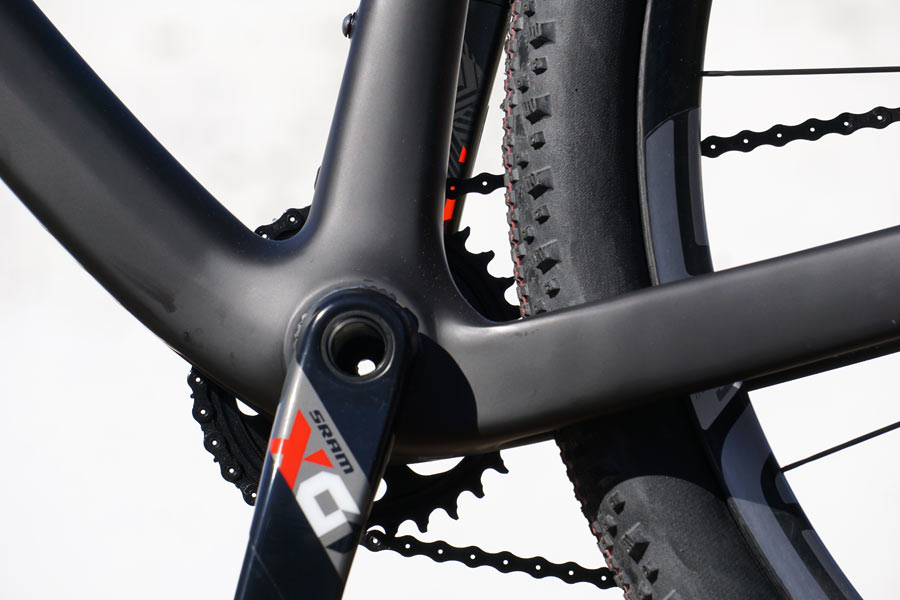 Big downtube-to-BB-to-chainstay transitions mean this thing should have no problem laying’ down the power. Inside, there are cable channels below the BB hole, which keeps the rear shift housing away from moving parts. Just in front of the BB is a bolt-on Di2 battery cover, which also makes installs easier by opening up another window into the frame.

The frame ships with a liner running from front to back to help pull the shift housing through, and it uses full length housing from shifter to derailleur. One concern I have is that housing rattling loudly. I slipped one zip tie into place to “spring” it against the tube wall, but I might be making a quick trip to the hardware store for some pipe insulation before the race…look for the post-race report to see what happens. 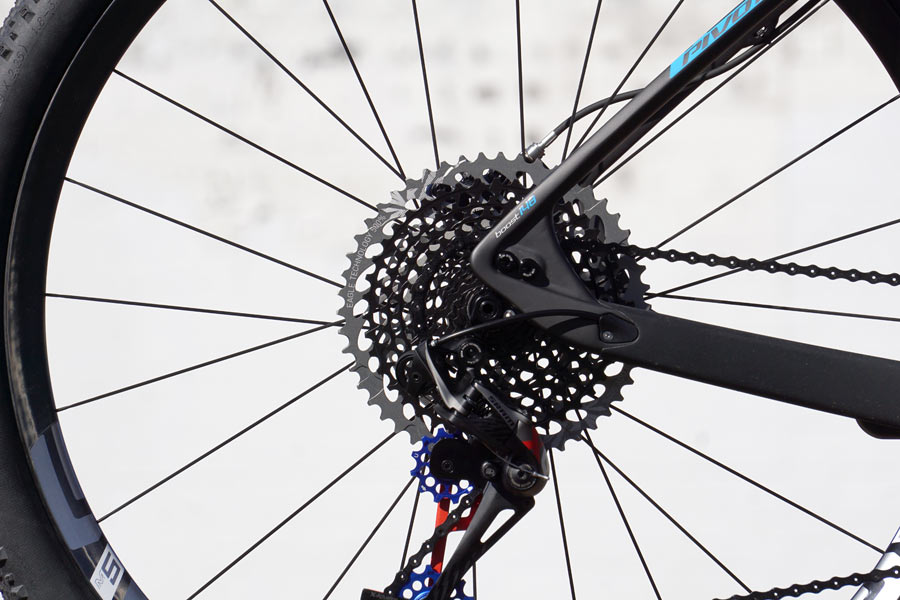 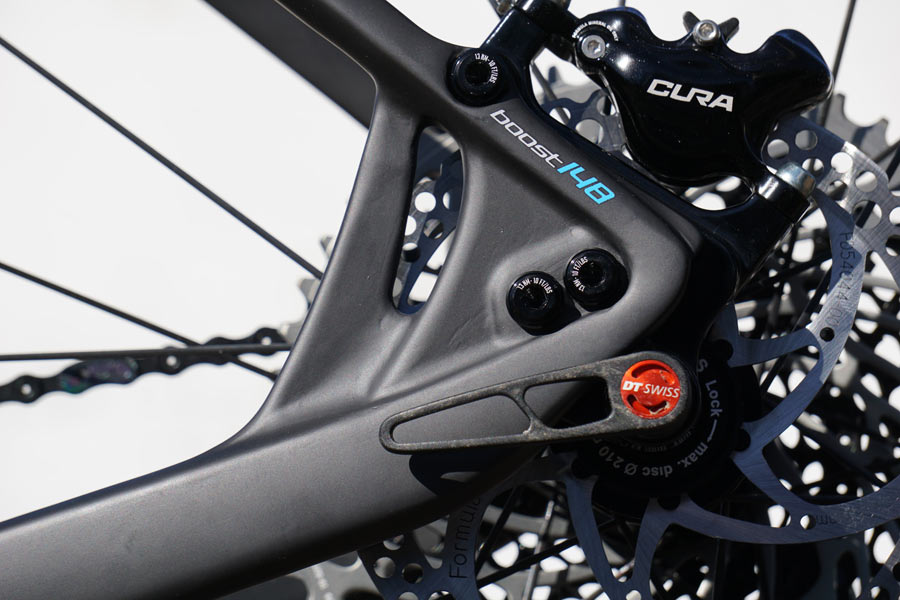 The secret to this bike’s multi-tire/wheel size compatibility is their Swinger II dropouts. 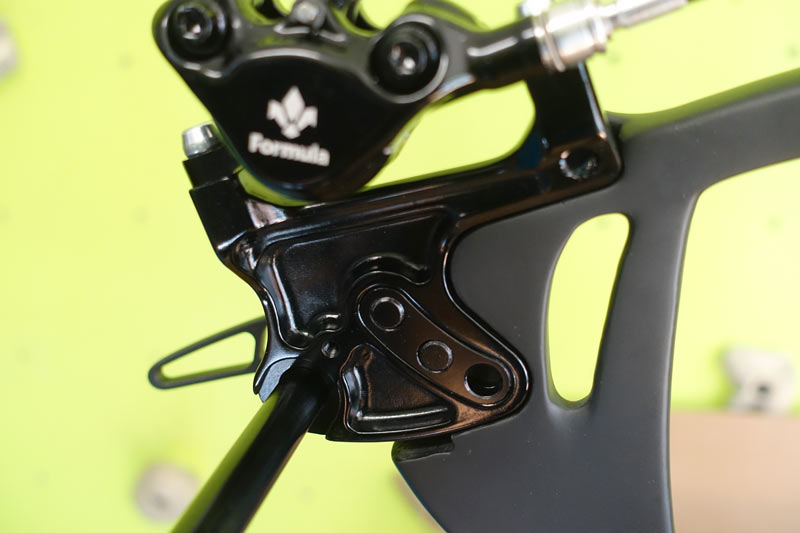 These are the “Race” dropouts, which offer two fixed positions, using the rearward one to add ~25mm to the chainstay length and increase tire clearance. In the forward position, chainstay length is 17.1″ (43.43mm”). They also sell infinitely adjustable sliding dropouts for single-speed builds that provide a 428mm to 446mm range and add 63.5g to the weight. 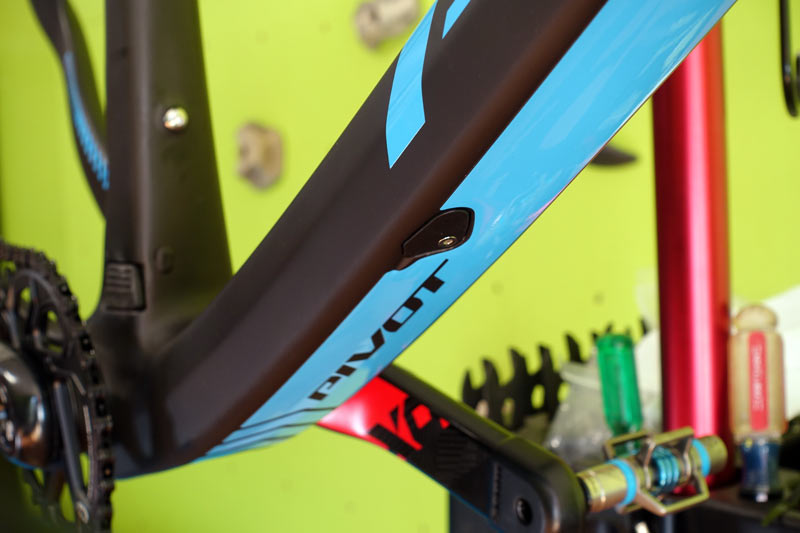 The bike is set for SideSwing front derailleurs, and Di2. But this is a 1x build. 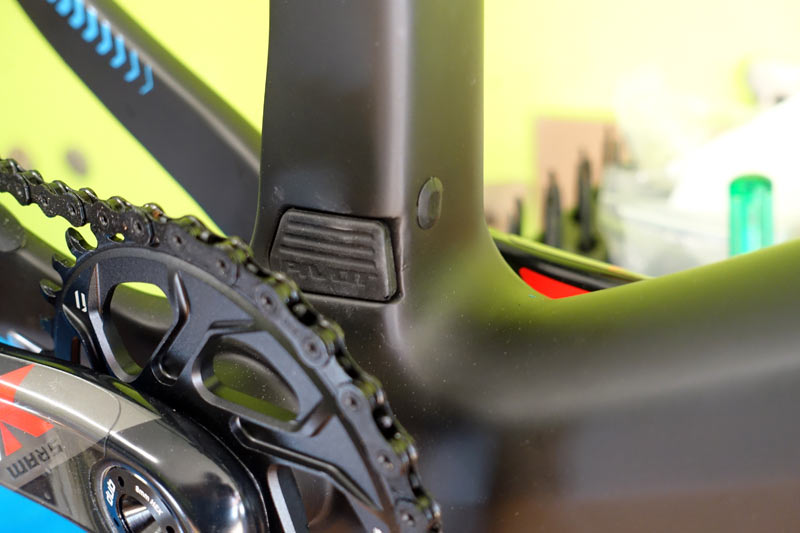 It comes with a rubber bolt hole cover to hide the front derailleur mounting area, which you could also use to install a chain guide. 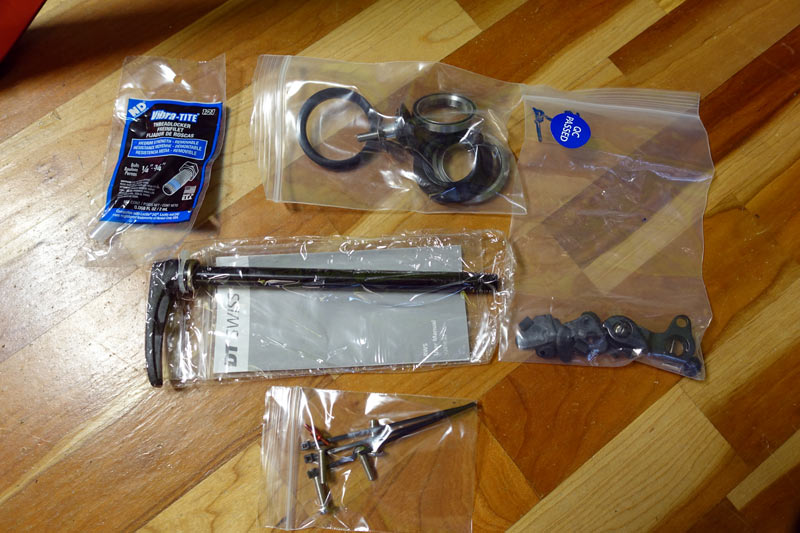 It comes with a few other things you’ll need, too. Like the headset, rear thru-axle, zip ties for the rear brake hose, and derailleur hanger, plus spare bolts and cable port covers. It even comes with the threaded barb to twist into cable housing/brake hoses to help pull them through, which is also very handy.

Choosing from carbon/red or carbon/blue, the LES frameset retails for $2,099. Or $3,099 with headset and a Fox 32 Stepcast fork. Full details at PivotCycles.com. 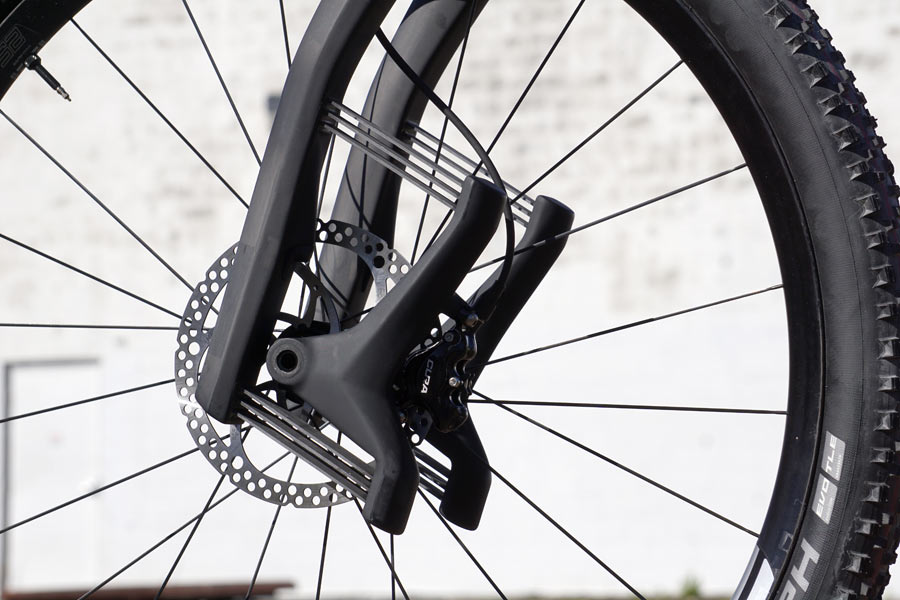 We’ve covered the technical aspects of the Lauf TR Boost quite a bit. This current iteration was released in 2015 with a redesigned upper that was stiffer and opened up to accept the 110mm Boost hubs. Travel remains at 60mm. Claimed tire clearance is 29×2.5 or 27.5×3.0. As the pics above show, there’s gobs of room with a 2.35″ Schwalbe on ENVE M50 rims. 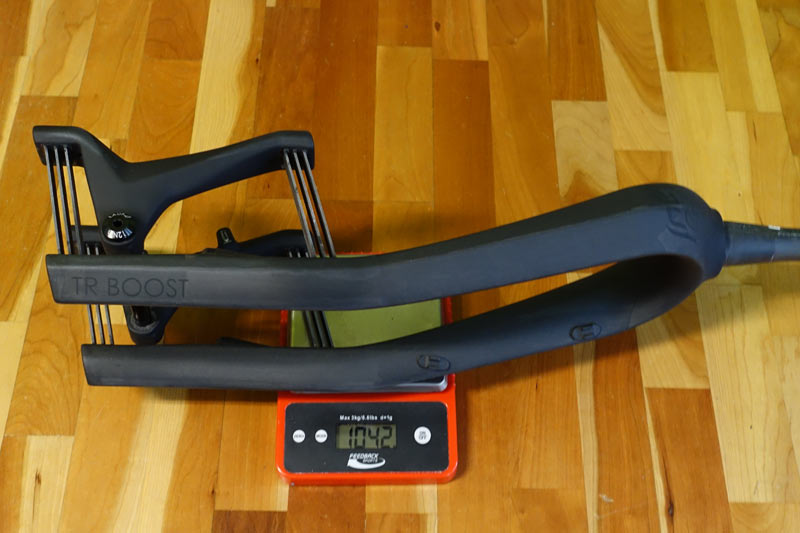 Two spring rates are offered for lighter or heavier riders, it comes in several colors, and retails for $890. Or opt for a special paint scheme for $990. I’ve ridden Lauf’s original fork bombing down trails in Pisgah Forest and through 6 Hours of Warrior Creek. Based on the videos below, the 60mm of travel combined with the 29×2.35 tire should tame the rocks well enough while keeping the front end very light.

That’s the foundation for this year’s XC Project Bike. Here’s the rest of the build, with actual weights for everything:

Here’s a little more about the race that fueled these bike and component decisions:

WHAT’S IN STORE AT THE TRUE GRIT EPIC

Our friend Thom at DirtWire.tv was there last year and shot these videos, which make for great course recon… and fuel for making you wanna get out there. We’ve also ridden Gooseberry Mesa before, and there’s tons more trail that we’re planning to see.

No, not me Tyler. Some other Tyler.

Post race, we’ll have a full report on the area with tips on where to stay, what to eat, where to get your bike fixed (or rent one) and more. Interested in racing one year? Head over to TrueGritEpic.com for details.

I think you have made weight the priority on a set of trails where performance and suspension rule. That bike would be great for “Crusher in the Tushar” or “The Wild Horse”. Still- Good luck, and happy riding….

I’ve done this race several times and while some sections (Stucki Springs – sp?) would be fine on a gravel bike I can’t fathom riding any of the other sections on one. Also can’t imagine doing this w/ 60mm of travel – hopefully you have some high volume 2.35 rubber and a massage therapist. have fun, this is a great event.

Yeah, I hear you. I ride a ‘98 Cannondale hardtail with 63mm of elastomer suspension, ancient geometry, cantilever brakes, no dropper, and small tires. The fork has never been serviced. And I ride in Northeast Pennsylvania, which has some of the rockiest trails in the nation. As you can imagine, I break shit on the bike all the time.

Fork is light. Basically offsets the pig of a frame. I’d personally go with a sub 1kg frame with a Sid up front, ending up still over 100g lighter. That is, if I was bothering with hardtails at all anymore.

a SID or Fox 32SC is less than a pound heavier, and is actually suspension. But I’d even rather have a rigid fork than an undamped spring if I’m going fast.

thats going to hurt the hands! curious about the result

3k frame & fork with 60mm of undamped suspension ? haven’t bikes progressed from this ?

you pay all that money for a frame and they cant even put internal cable housing in there. My china direct frame has them. I always wondered why everyone complained so much about internal cables thinking that surely, if my 500$ frame had these then the 1500-2000$ frames had to have them too. i guess not. i love being able to just push my brake line in either end and have it just pop out the other right were it is supposed to.

I agree with Bob. Just built up a Pivot Mach 429 for my wife and ran into the same brake hose routing issue as the author, but was smart enough to figure out the barb trick on my own. But the Chinese direct frames I’ve built up (miracle cycles ftw), the cables and hoses just magically glide thru with no drama. For 1/4 the price. And for this average enthusiast, no quality difference.

Instead of going with those fashioned “gravel” bike the smart choice would be mtb with mini aerobar.

All, my personal preference would definitely have been a full suspension bike, and that’s what I ride all the time. But this particular project came about thanks to the Lauf invitation, so I thought it’d be interesting to put together a bike around that fork. Considering even the pros race this event on full suspension, I have no misconceptions about what’s coming, but if I’m going to put any components through the ringer, this is a good way to do it. Stay tuned…

Have a great time! Wish I had this on my calendar for this year. I think your setup will be great for most of the “miles” but genuinely don’t envy you on the tech sections. Weather is looking great but don’t be surprised if it’s considerably warmer.