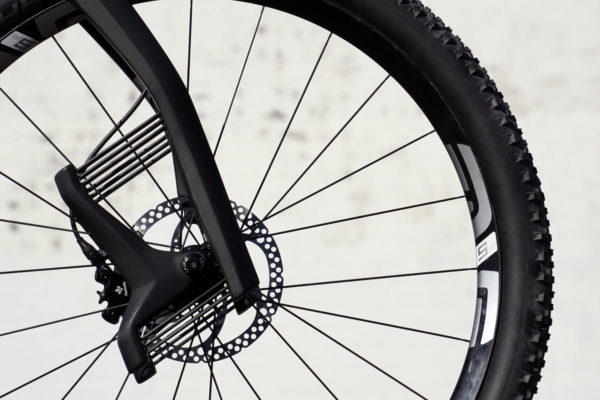 The new ENVE M-series mountain bike wheels debuted at Eurobike last fall, showing off wider beads and protective strips that aimed to eliminate pinch flats. They also reworked the sidewall thickness, layup and shape to improve radial compliance so their wheels would be more comfortable without losing lateral stiffness. On paper, that all added up to the perfect feature set for a hardtail race bike heading to a rough, rocky course.

For tires, Schwalbe made a big deal about their Addix lineup improving on grip, durability and rolling resistance. The revamp introduced new compounds to their entire mountain bike tire line, with color coded performance indicators to ease selection. I pulled in five of their most popular XC and trail patterns, waiting until the last minute to choose. 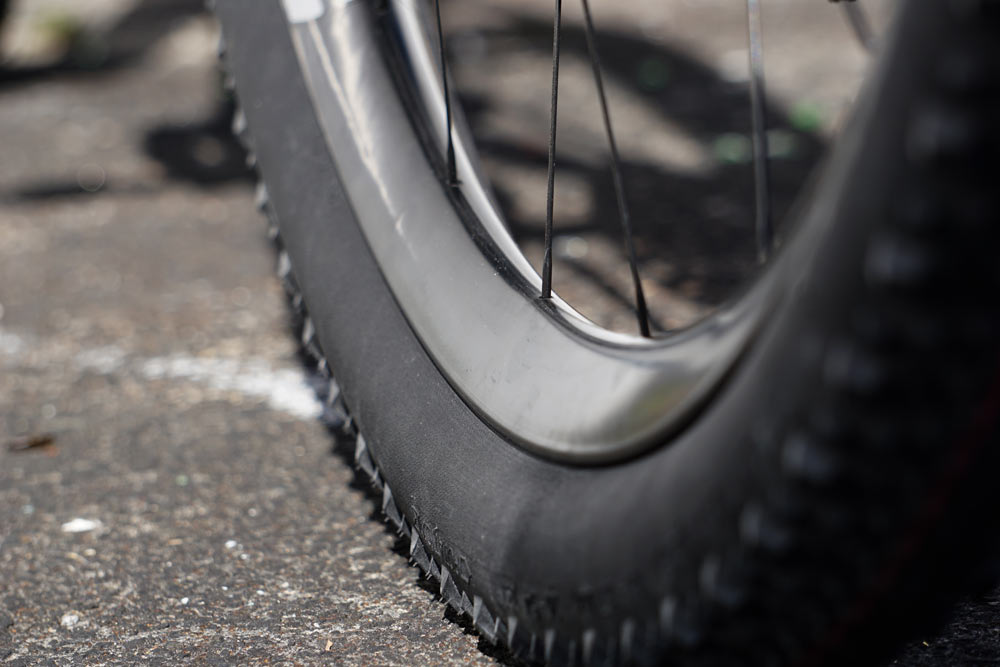 The parts needed to make them rideable add a little:

Total riding weight for my wheelset 1,440g. If you’re running Centerlock rotors, your weight would be a bit less since you’d only need the lock rings and not the 6-bolt adapter part. 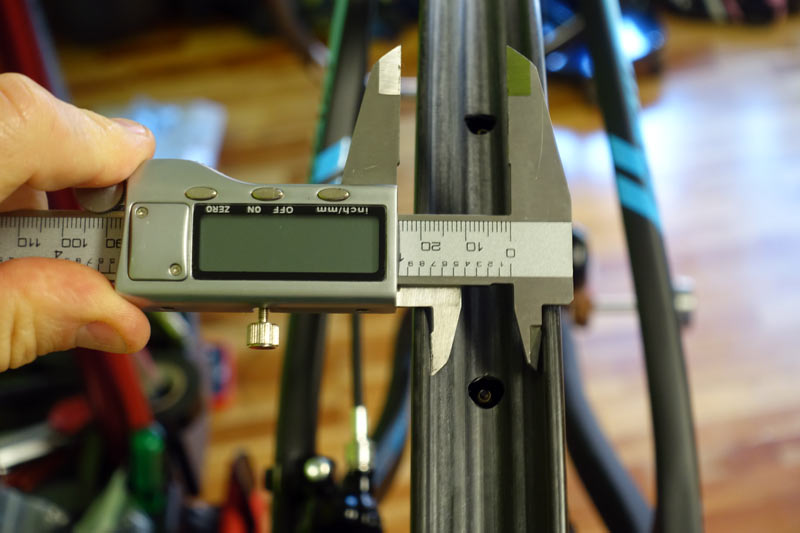 Inside width measured at exactly 25mm. 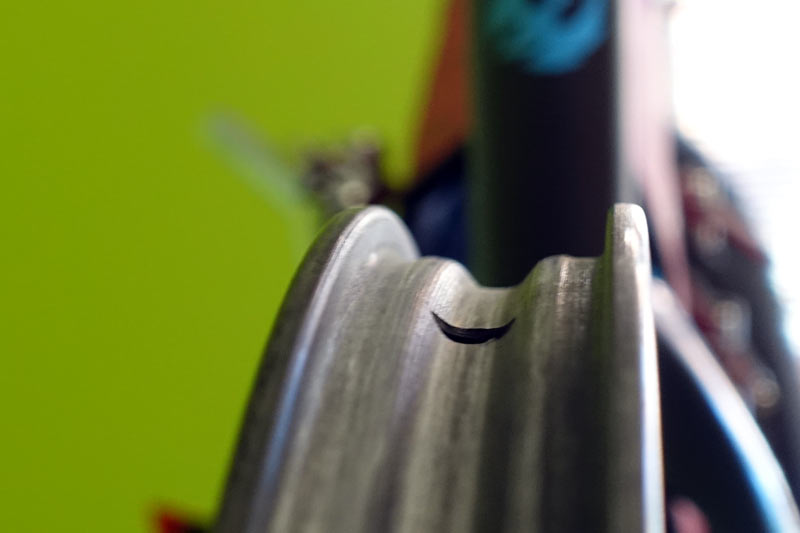 The rim’s interior profile shows off shaping that made setup extremely easy. A deep center channel helps get the tire into place and just about sealed it off well enough to inflate with a floor pump, sans sealant. Once inflated, the dropped bead seat locks the tire into place. The hookless bead rounds off at the top, both inside and out, which along with it’s thick wall, is the secret to its claimed pinch flat prevention. As the sidewall gets pressed against it, there’s no hard edge to slice the rubber. 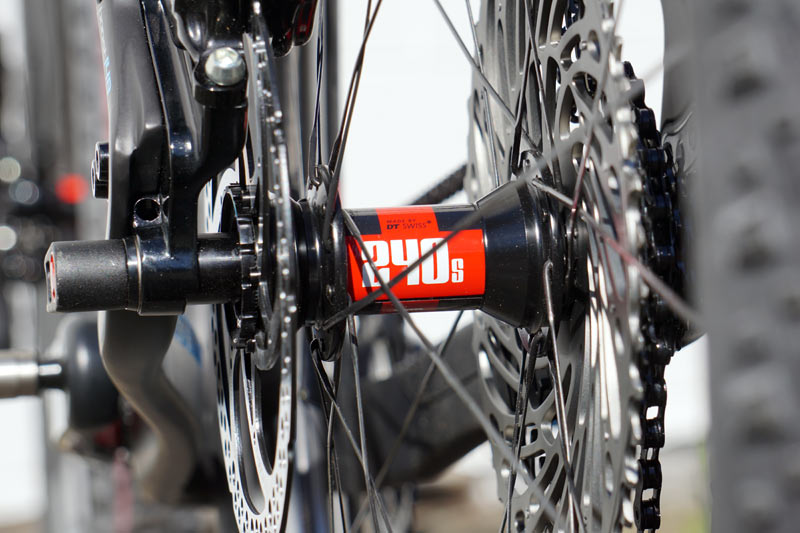 The M525 series is built on DT Swiss 240s CL Classic hubs, which use their virtually silent Star Ratchet engagement system rather than standard pawls. The “CL” refers to Center Lock, which is the only option for this model.

I requested these wheels for this build because I knew the course would be rocky, and without the benefit of suspension or oversized plus tires, the rims would play a key role in keeping me rolling flat-free while using lower tire pressure. And with claims of improved compliance, I’m hoping they actually help smooth the ride themselves, too.

The new ENVE M-Series has four ranges, some with multiple widths, offering the new design for everything from XC to downhill. The two wider 7- and 9-series collections use their new rim strip, which acts as the rim tape for even easier tubeless setup. Find them all at ENVE.com.

Schwalbe’s entire premium mountain bike tire line is now called Addix. Like some F1 racing tires, they get colored stripes to indicate usage, with red being Speed and blue being Speed Grip. There are two softer, grippier options, but the red and blue were the right starting points for an XC bike.

Actual weights for the Snakeskin Tubeless Easy options are:

I requested these tire options because the weather forecast was showing potential drizzling rain…or sunny and dry. On the day I need to ship the bike, things were looking sunny, so I opted for the two Speed tires. When dry, Utah’s rocks and dirt are mostly hardpack, so fast rolling rubber made the most sense. 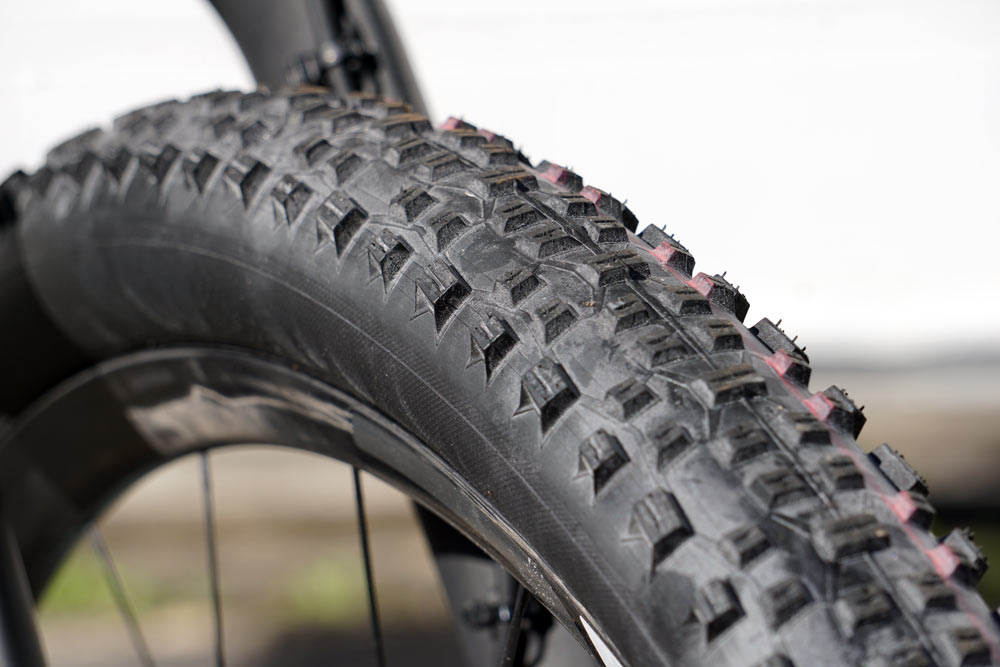 The Racing Ralph is a mid-height knob with ramped center sections to keep it rolling fast, but reinforced side knobs to hold in the corners. 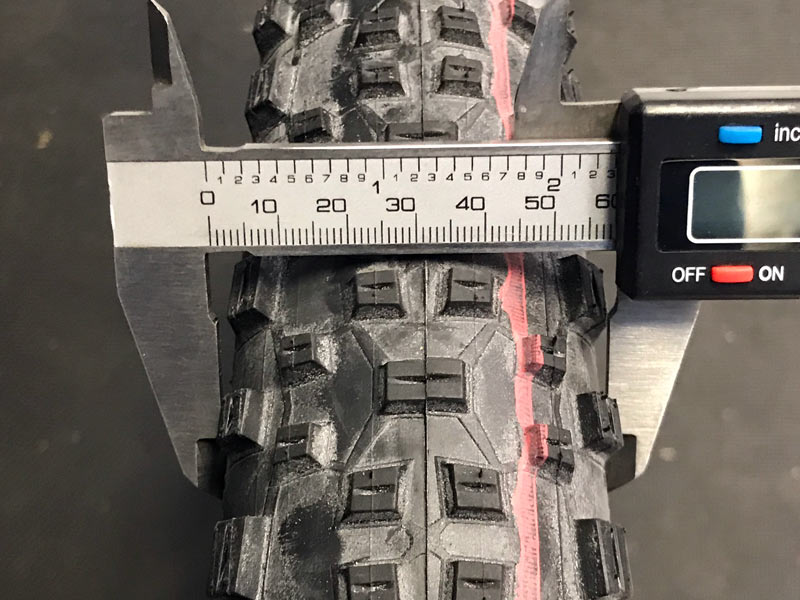 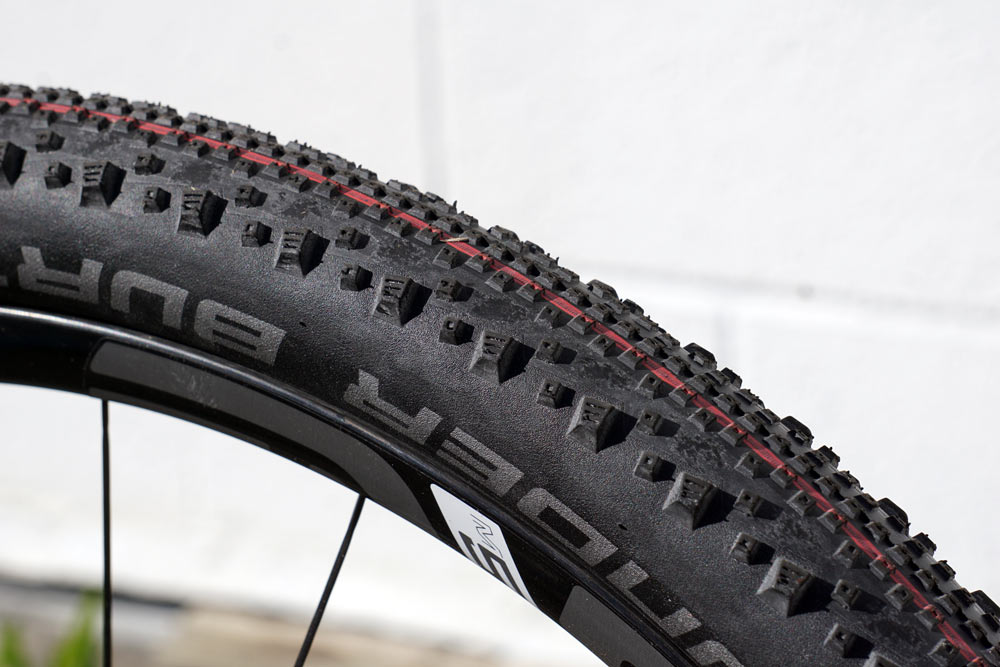 The Thunder Burt could almost be called a semi-slick, except the small center knobs have useable height. Each is pockmarked with a small hole in the middle, helping them mold and conform to the ground when needed, but mostly just fly over it quickly and smoothly. This seemed like exactly the right tire for maximizing the contact patch on slick rock climbs without giving up cornering grip on the rest o fate trail. 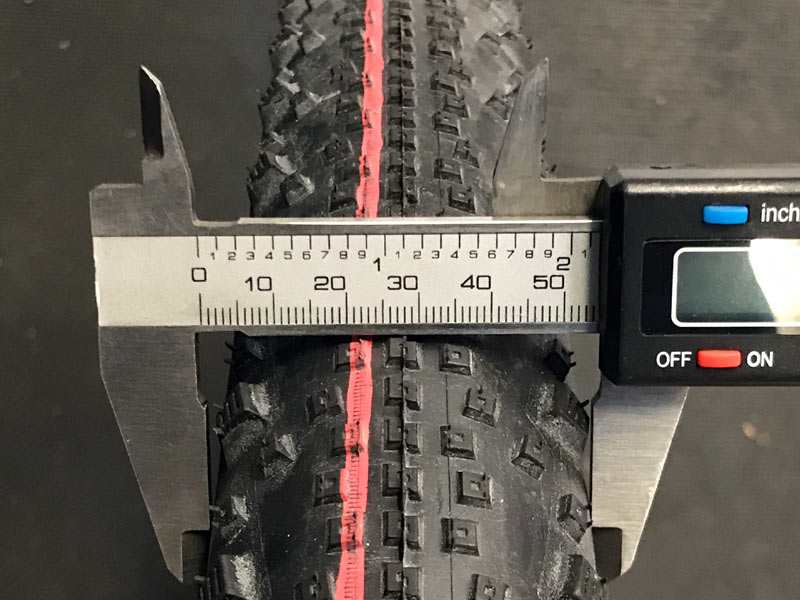 The Thunder Burt 29×2.25 measured a bit narrow at ~2.15, which was a bit of a bummer since I wanted as much cushion on the rear of the bike as possible. But close enough, and the decision was made. Find the right tire for your trail at Schwalbe.com.

That concludes the bike build. Coming up next are all the gear, tools, and small bits used during the race. Miss something? Here’s the rest of the build:

Keep wondering how long before you give up on digital calipers and their battery issues and get a dial, I did 4 or so years ago and I don’t even know where my digitals are. We won’t even go into how hard it is to translate 17/128th into a usable number. Just my 2 cents.

Dials are the most prone to contamination out of the 3 typical caliper configurations. They’re fine in a casual inspection scenario, but nothing beats a cheap digital for what he’s doing. Quick, reasonable accuracy, with not much repeatability required, means a cheap digital is perfect. Wouldn’t want dirt in the gears of a cheap dial.

Back to the bike… That’s quite a narrow choice for the rear indeed. I’ll have to measure the next Thunder Burt I see, and hopefully it won’t measure undersized as well.

Schwalbe tires usually take some time till they reach their designated size. Just give them 3bar over 24h and they’ll be fine.

Thanks for the picture of the completed bike

this is a great series of paid spam articles. i am sure any review of this bike or products will be very non-biased. /s

Bob, what do you think pays the bills for this website and or the people running it? Seeing as there is no paywall, I’m taking a wild guess that it is advertising from companies like Schwalbe. Part of that advertising is sending products to the folks at BikeRumor and having them use it. If one of those products doesn’t pass muster, I think BikeRumor usually is pretty good at saying so, but they do need to do it in a way that doesn’t piss off and alienate the supplier/advertiser unnecessarily. That said, I think Schwalbe makes some pretty nice tires, and when used in the conditions for what they are intended, will probably get a pretty good review, barring mishaps.

And therein lies the problem. In the 1970’s there was an off-road motorcycle magazine called “Dirt Bike magazine” which tested every brand of motocross and enduro motorcycle made. Unbiasedly. They said sometimes heartless comments about a bike’s performance but were completely honest. Along came the manufacturers and saw this and then came the “hi-Torque Publications” which bought Dirt Bike magazine and turned it into an advertisers heaven , and true magazine fan’s nighmare. The articles became cookie- cutter and never completely honest to the point that when they kept the tradition of having a shootout of several brands, they wouldn’t call any the worst, or the best or tell exactly where the problem in engineering really was. If they were negative they wouldn’t be invited to closed track test sessions at local California tracks because they would be black listed if they said too many bad tings or specific things about the engineering. The editors of this magazine also knew they wouldn’t be invited to visit Japan for bike unveilings, or parties for the press, or for any special deals on the bikes for magazine editors. the integrity of the magazine went way down but eventually another generation of riders accepted it not having a higher standard of magazines past to compare it to. full page ads that cost a lot were not going to be bought by manufacturers of product if they were too honest. the man responsible with a heart for integrity and honesty in testing , called “super Hunky” a racer and rider himself left in disgust. Nothing ha changed to change this pattern of behavior. It affects mountain bike magazines and only mountain bikers can change this but many are too affluent or lazy to ge involved or even aware of how the system works to care to do anything about it.

Bob, our reviews are honest and not influenced by whether or not a company is advertising with us. The purpose of these project bike builds is to showcase what’s new, exciting, and interesting in a way that lets us test a lot of things at once. It also lets us see how disparate parts and brands come together, since this is often the upgrade path for many riders. Actual real world weights are also something many riders are looking for, so we provide those with photo proof.

In this particular post, I’m simply explaining why I chose these particular parts. The actual review will come later, once I’ve had a few days after the race to reflect on their performance.

we will be attentive the new post and the new battery for the digital caliper..lol

SRAM makes centerlock rotors, why not use those and skip the adapter?