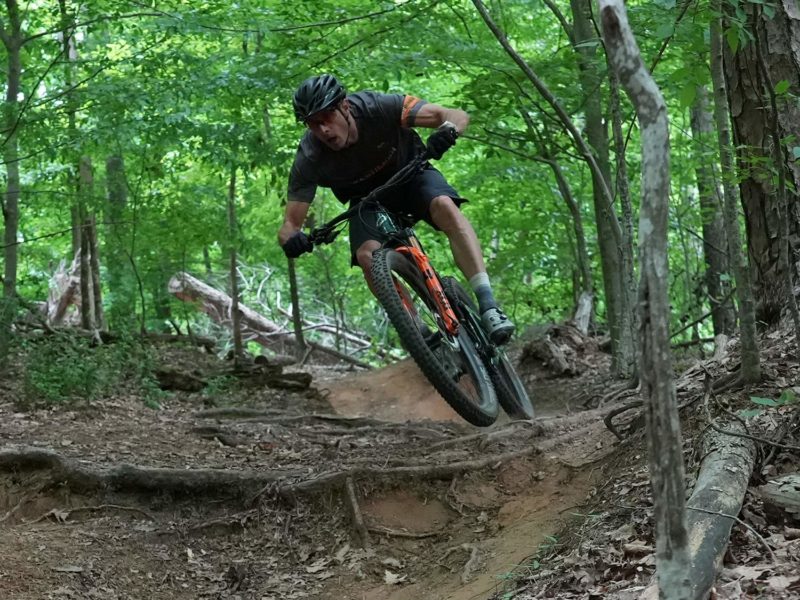 The latest generation of Niner’s JET 9 RDO firmly cements its place among the best short travel trail bikes out there. It was evident from my first ride that they’d worked their magic again, and reinforced every ride thereafter.

It’s more capable. It’s stiffer. And it feels more at home in its skin as a trail bike, which is good since this bike has morphed over the years from a lightweight XC race bike into it’s current 120mm travel trail bike form. Each successive generation got a little more shreddy.

Each was good, this one’s better. And yet, there are two things I’m still coming to terms with. Here’s my review…

This video review shows the suspension action, pedaling performance, and a closeup look at the details, including a peek inside the frame! 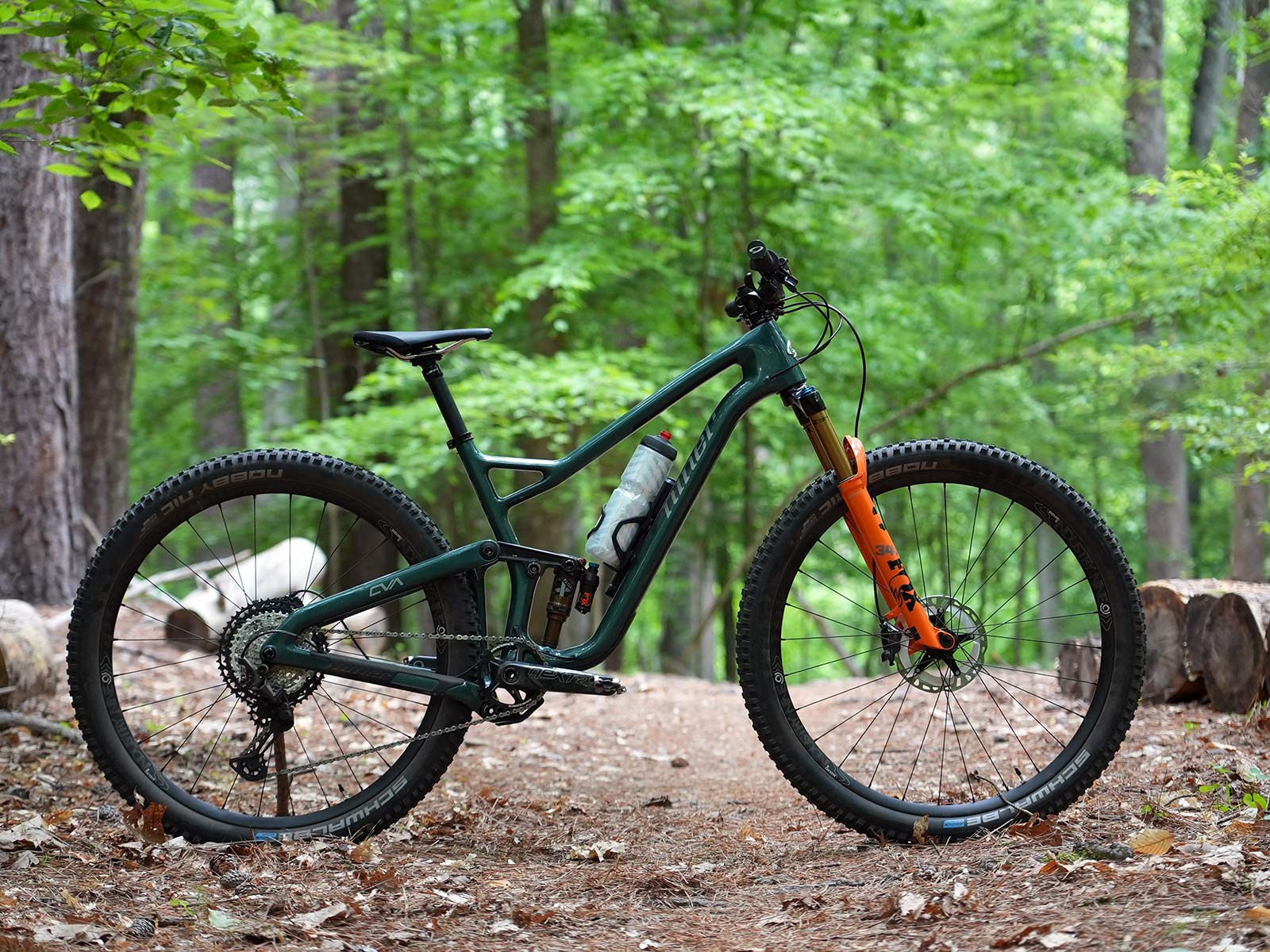 For those who haven’t read my past reviews, here’s the quick version: I’ve owned and ridden every generation of JET 9 since the model launched.

It’s my go-to bike for testing new components, so you’ve probably seen a lot of it showing up in a lot of posts over the years. That’s because it fits me well, and has one of the best balances between climbing traction and efficiency and buoyant, bump-eating suspension. I know it inside and out, which makes it easy to tell what a new component is doing when I swap parts.

It also means I can tell what a new version of the bike is doing, too. And this one does a few things differently. 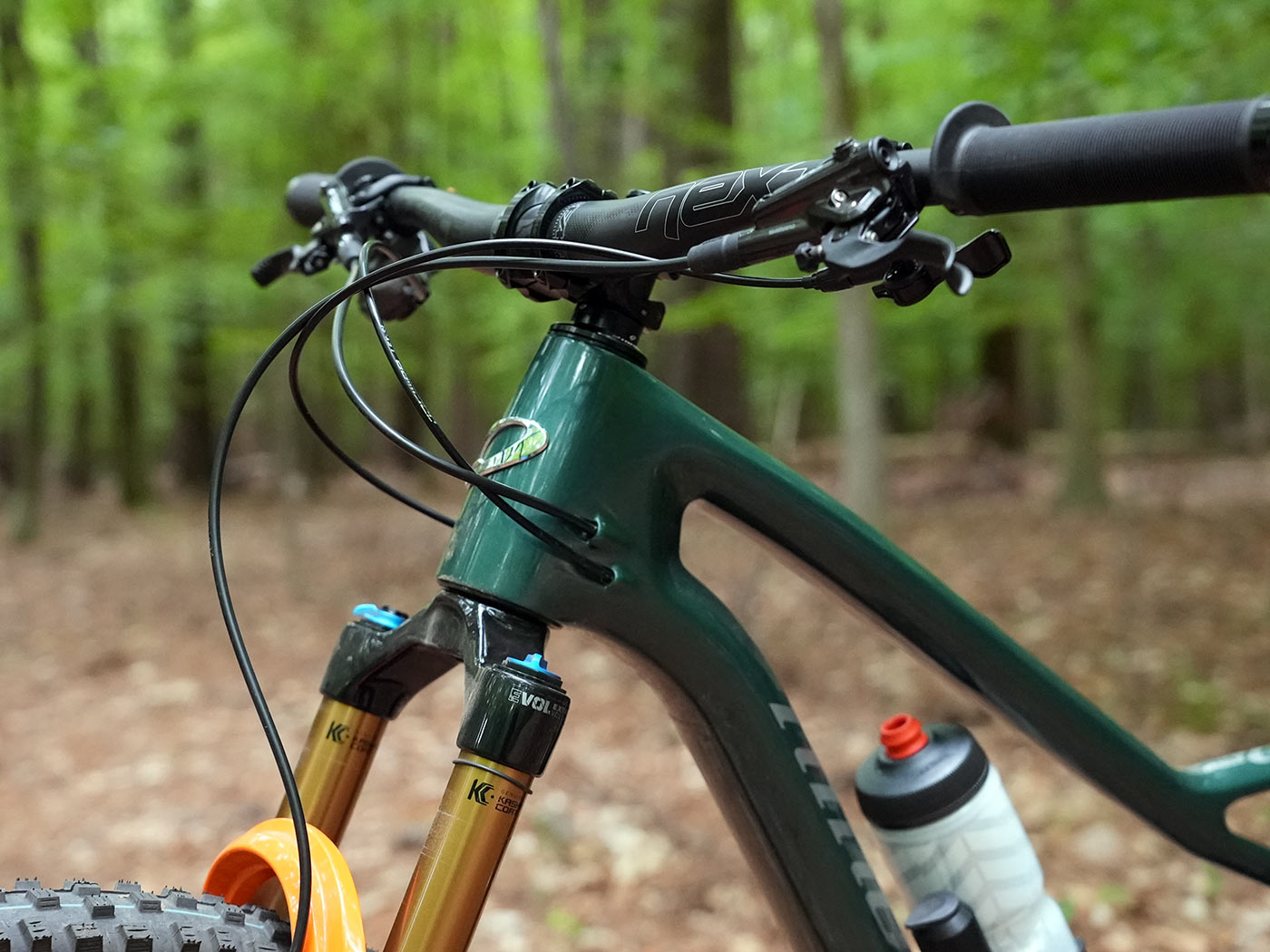 For starters, the frame is noticeably stiffer. Not that the prior JET 9 RDO was flexy, but this one’s overbuilt. 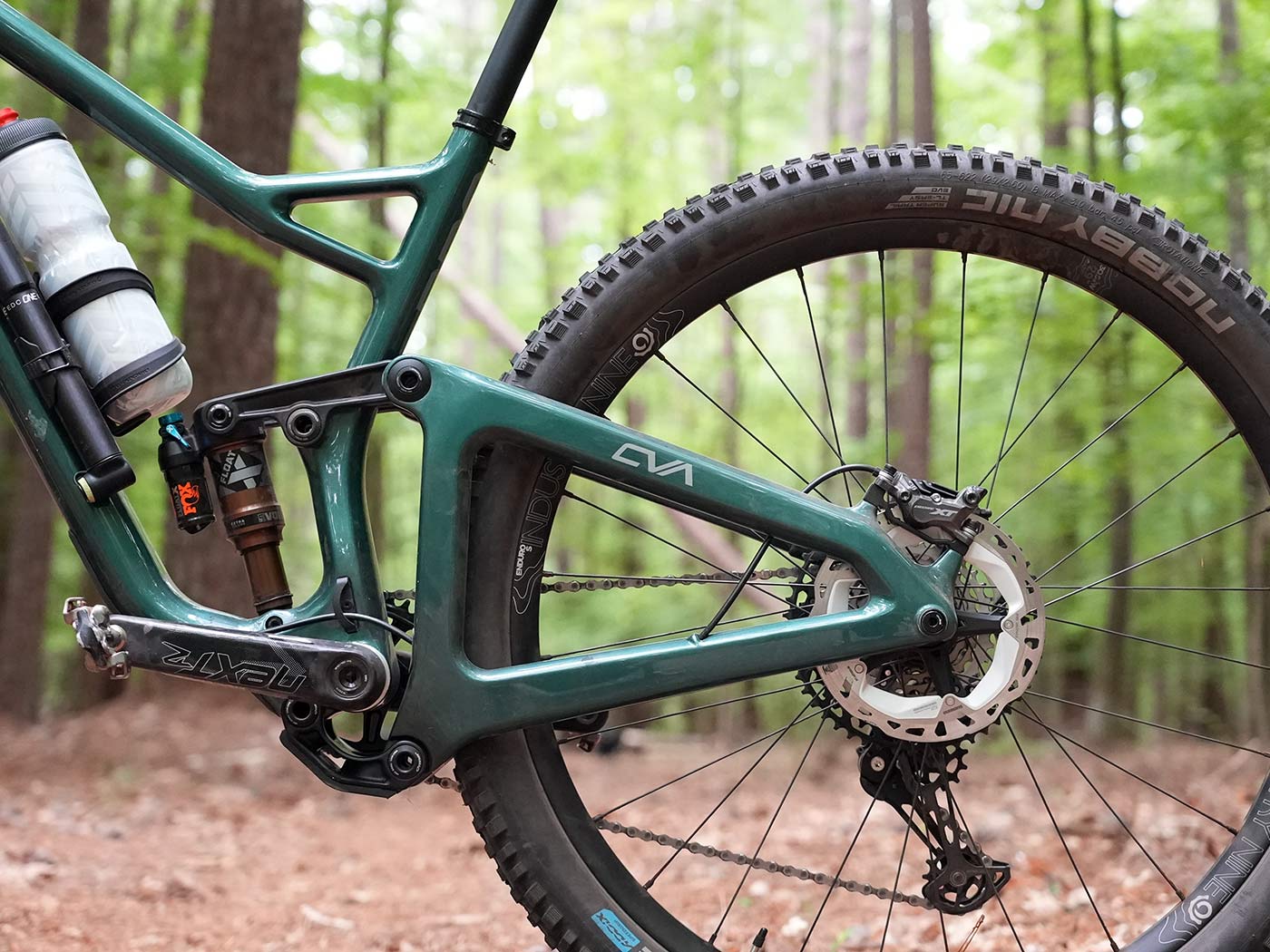 The rear end is thicker, and the rocker arm is dramatically bigger. 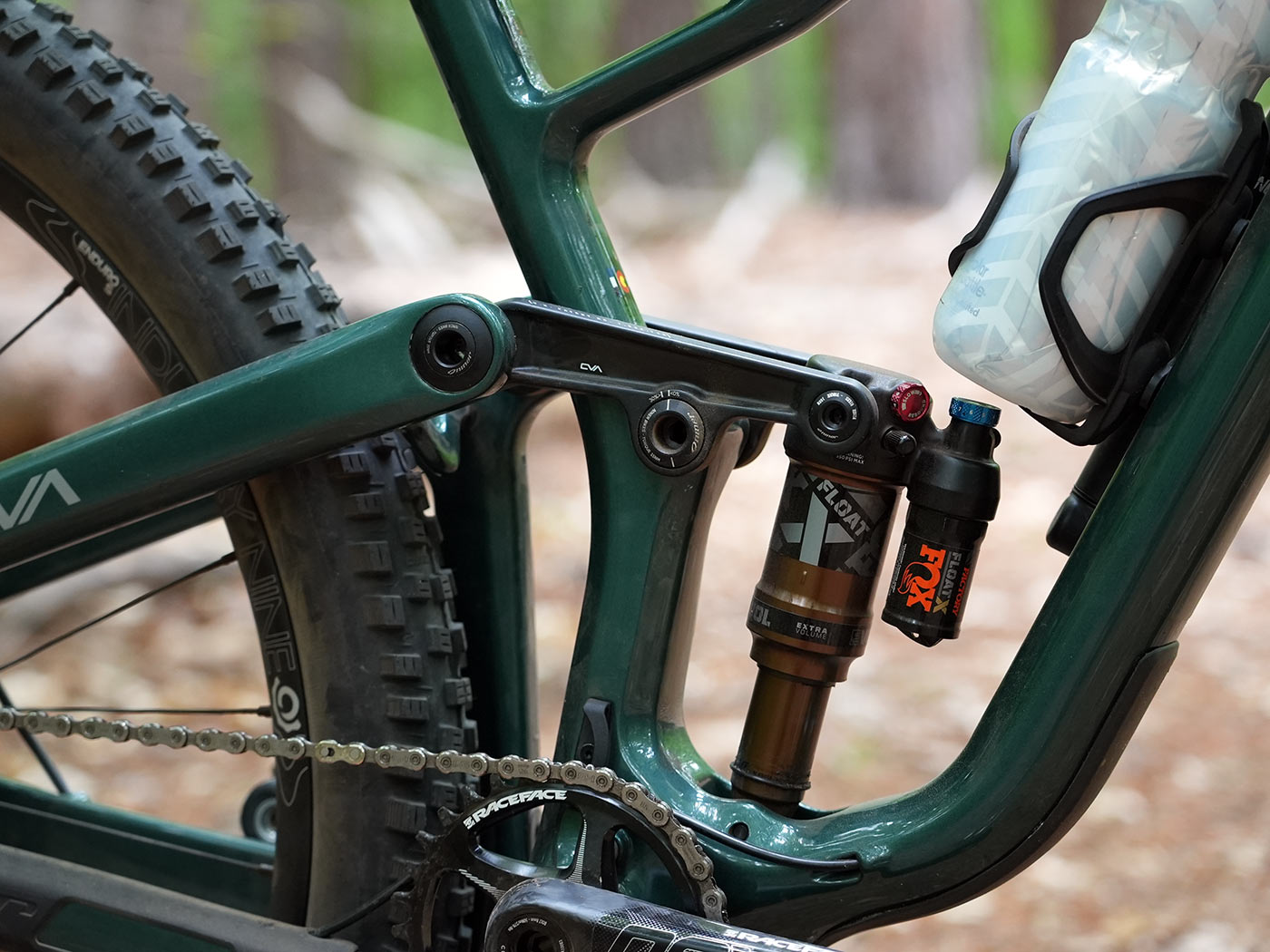 The rear shock’s trunnion mount lets them space everything a bit wider. It all adds up to a bike that feels tougher. 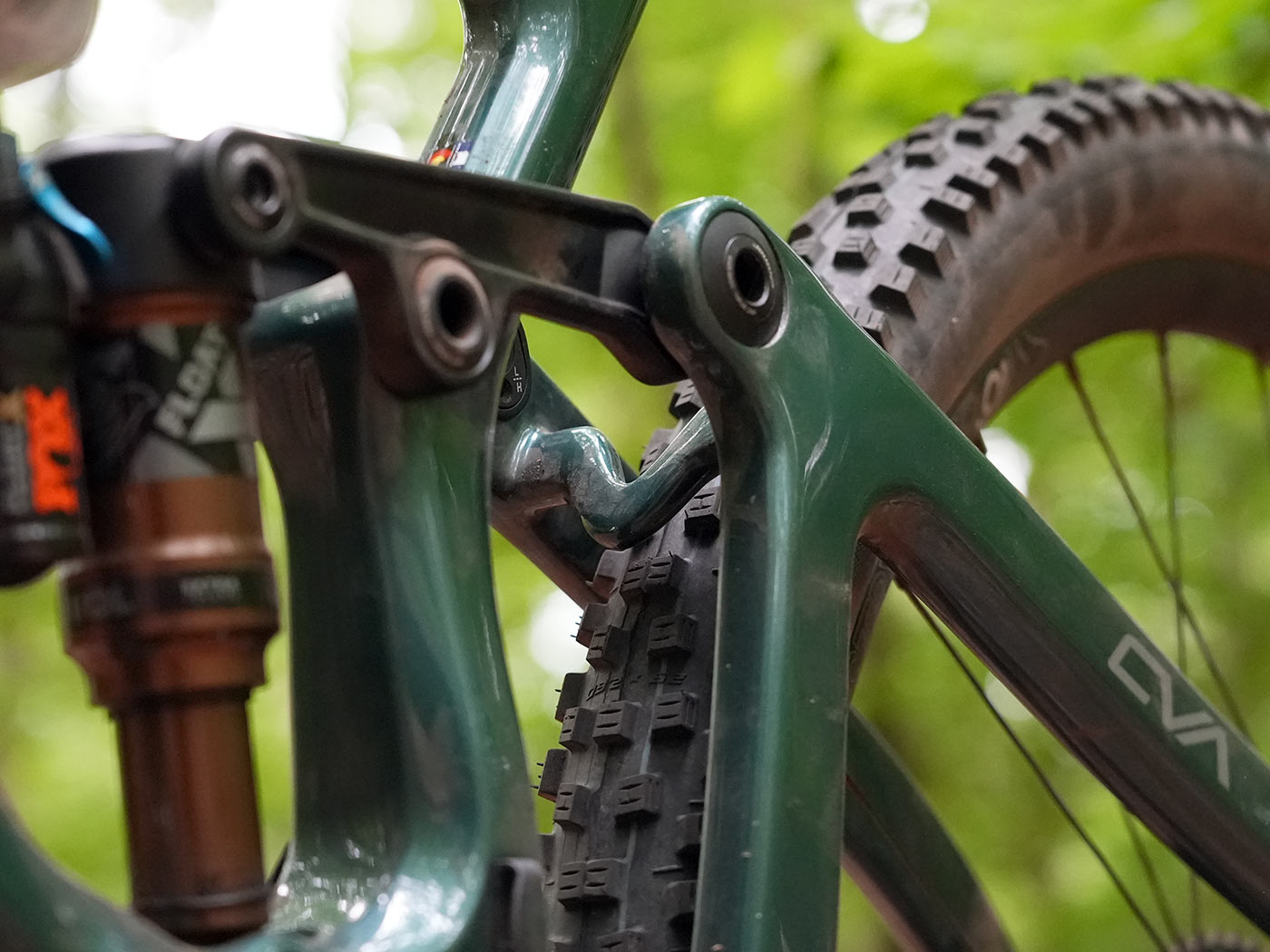 I also like what they did with the suspension curve. It still has 120mm rear travel, but now it feels like more. It handles big hits and drops a little easier. I only bottomed it out once (in Florida of all places!), but it wasn’t harsh…just like a little tap on the shoulder saying “hey, take it easy, bro”. 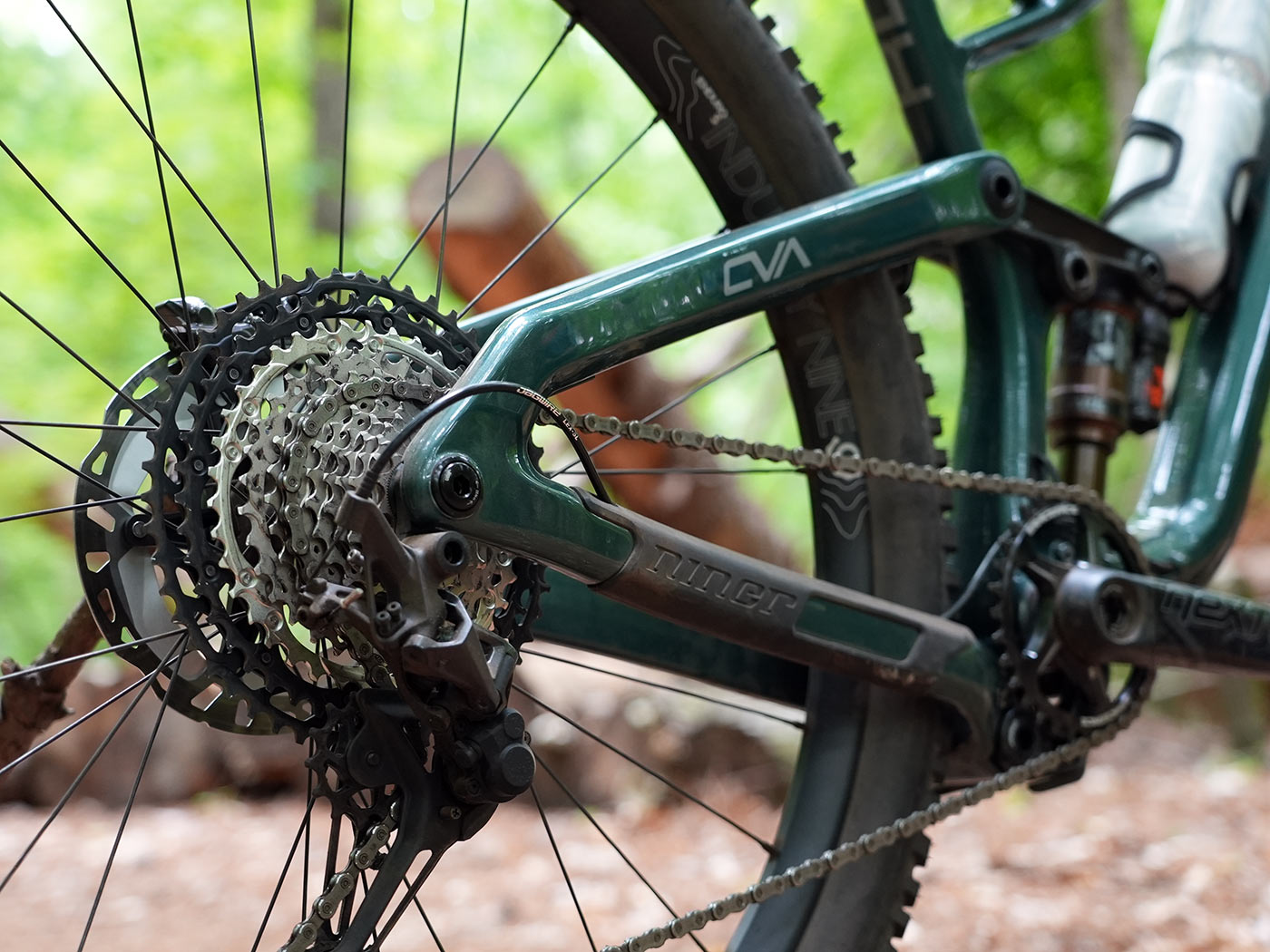 It also still climbs exceedingly well. I’ve always liked the way Niner’s CVA suspension maintained traction on rough, rooty climbs, particularly when seated. There’s no bouncing, no drama, and no harshness…just leave the shock in Open/Descend mode and it’ll keep the rear tire conforming to the ground without sapping your energy through unnecessary compression.

Overall, the JET 9’s suspension is just really well balanced and effective. Now it’s just a bit better, and there’s still rarely any need to use the lockout switch unless I’ve got miles of fire road in front of me.

What about the new geometry? 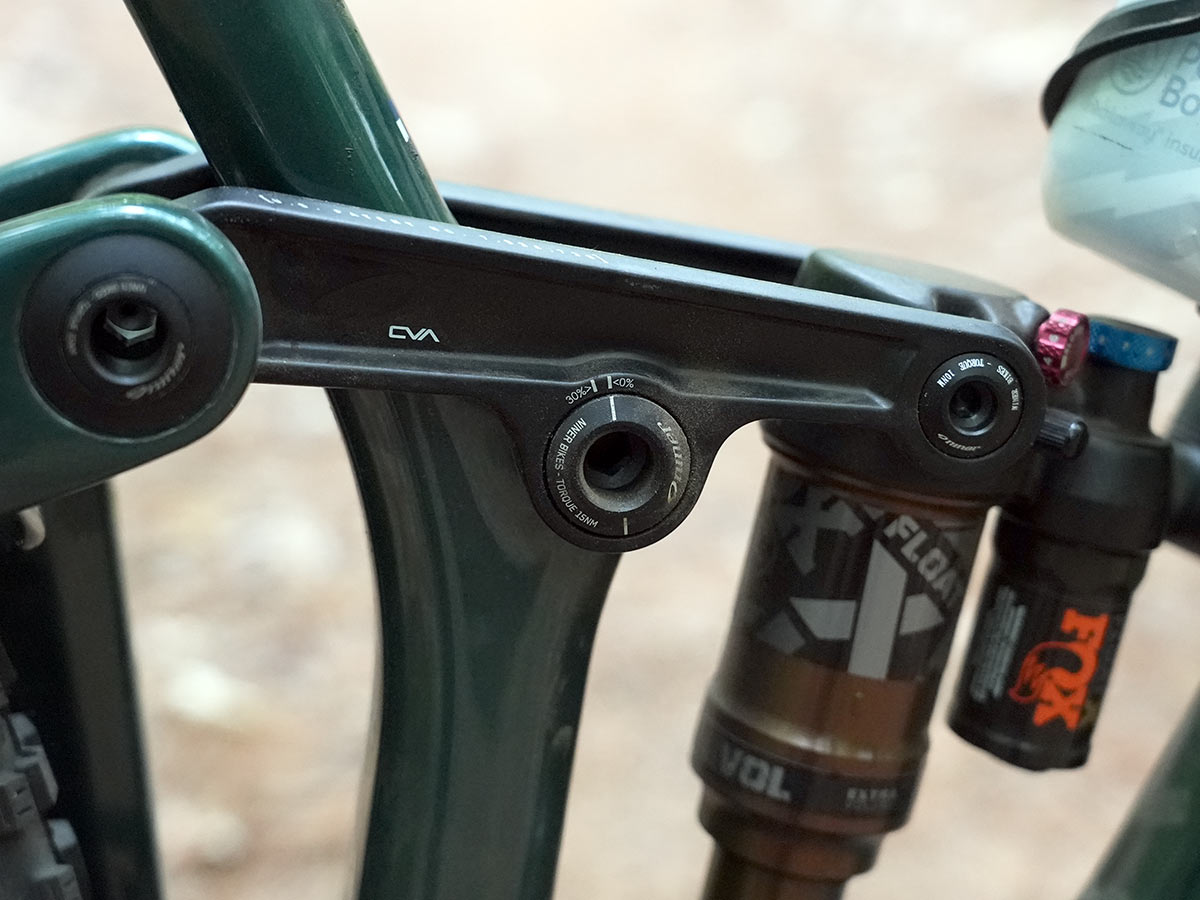 A sag indicator on the upper rocker arm makes it easy to set your own rear shock sag.

Across the board, all frame sizes got longer reach, lower stack, lower bottom brackets, and slightly slacker head angles. Other than the 2º increase in seat angle and reach, all of the other changes were fairly minor, but it definitely feels different.

But let me start with what’s the same. I ride a size Large JET 9…always have. Their XL sizing is really big, which is great for riders up to about 6’6″. I’m 6’2″ and prefer the more nimble feeling of the Large.

Just like the last model’s 125mm dropper post being about 10mm too short for me to get proper leg extension, this one’s 150mm dropper is also about 10mm too short. Fortunately, the bike will fit a 170mm dropper to solve that problem, but I’d still like to see Niner at least offer multiple dropper lengths on any bike. They’re already building to order in Fort Collins, CO, anyway, so this shouldn’t be hard. 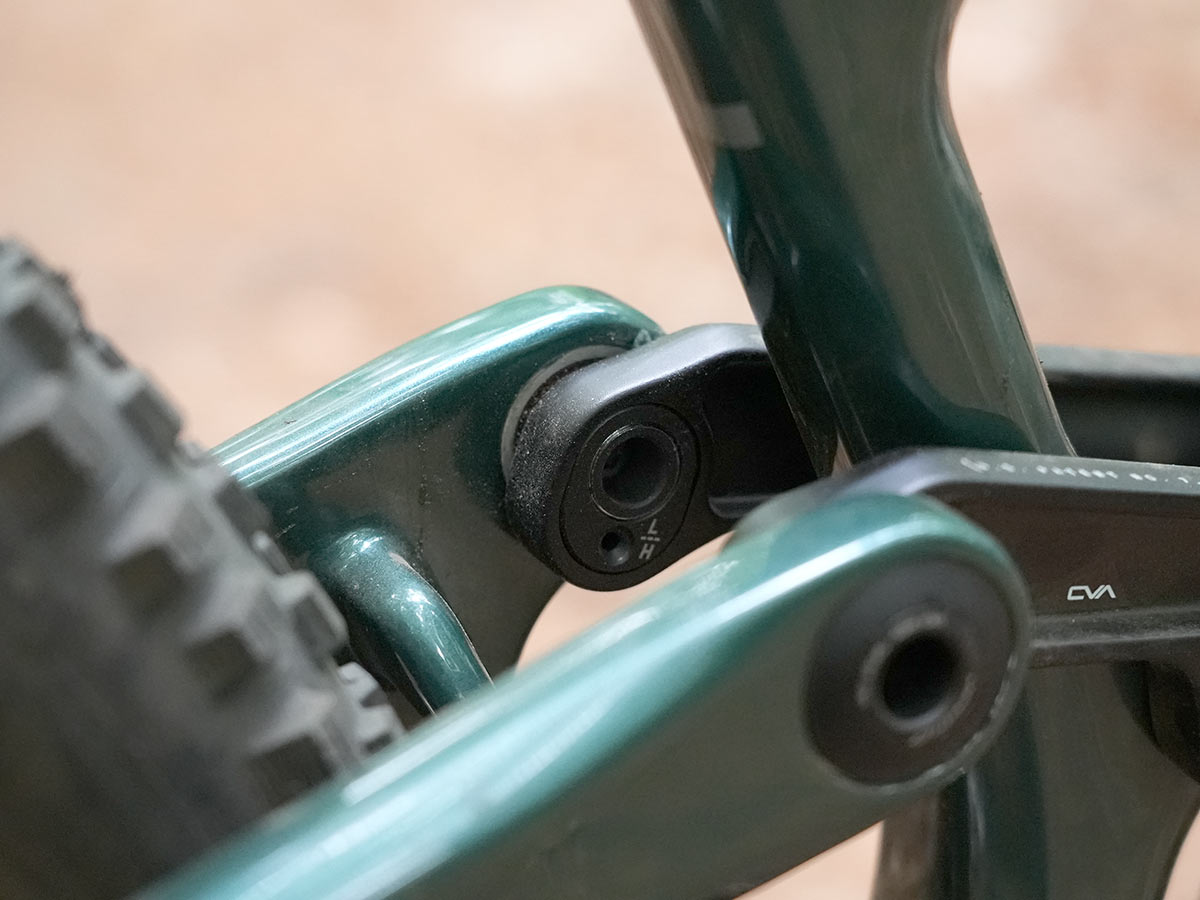 A geometry flip chip is new for the JET 9…I kinda prefer the high setting for more technical, pedally trails.

Otherwise, the spec and dimensions are mostly spot on. It comes with an 800mm wide handlebar on all frame sizes, but I’m likely going to cut it down a bit or swap bars…but that’s a good starting point to talk about overall spec choice.

Everything about this new bike suggests it’s designed to tackle more. From the Fox Factory 34 forks with GRIP2 dampers (external low/high speed rebound and compression damping), to the huge 2.6″ tires on 30mm wide rims, to the wide handlebar and short-as-possible stems, this bike’s spec and overall design want to go big.

Perhaps bigger than the 130mm fork and 120mm rear end can handle, but also maybe not. I did find that the suspension was quite capable on some big hits and fast, deep drops and jumps. Having the aggressive spec certainly inspired the confidence to ride those things, and I’m sure I can still push this bike harder.

But can I make it lighter? 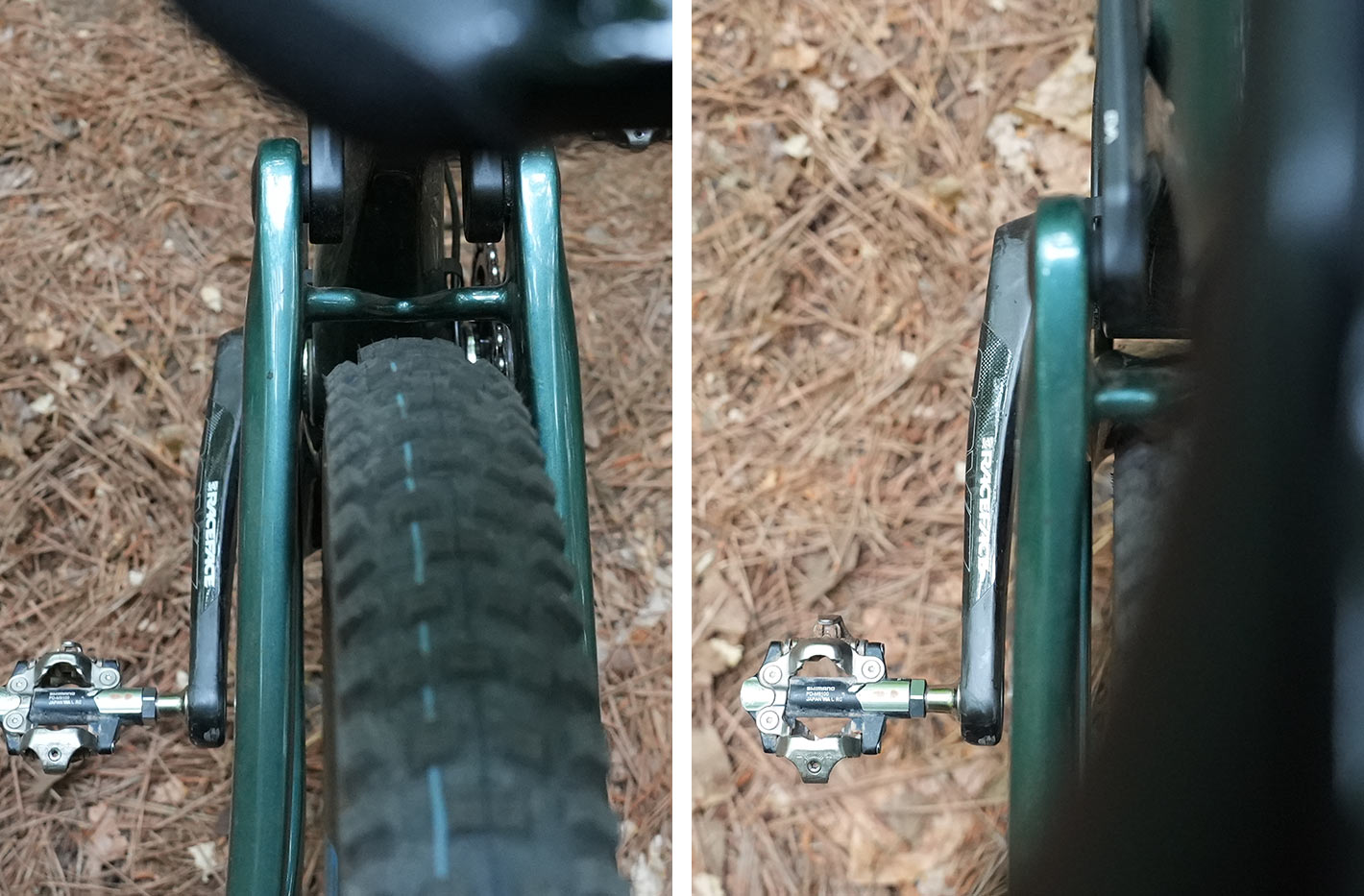 Our test bike arrived with 29×2.6″ tires front and rear (stock spec puts a 2.35″ on the back), and Industry Nine 1/1 alloy trail wheels (stock spec is alloy DT Swiss XM 1700 wheels). Otherwise, it’s a stock 4-Star build with XT drivetrain and Race Face Next R carbon cranks and handlebar, sort of…

We supplied our own Fox suspension for this test bike, and I’m running the lighter FIT4 damper version of the new 34 forks. The Float X rear shock is accurate OEM spec, but the bikes will ship with the slightly heavier GRIP2 fork damper. Here’s how it showed up: 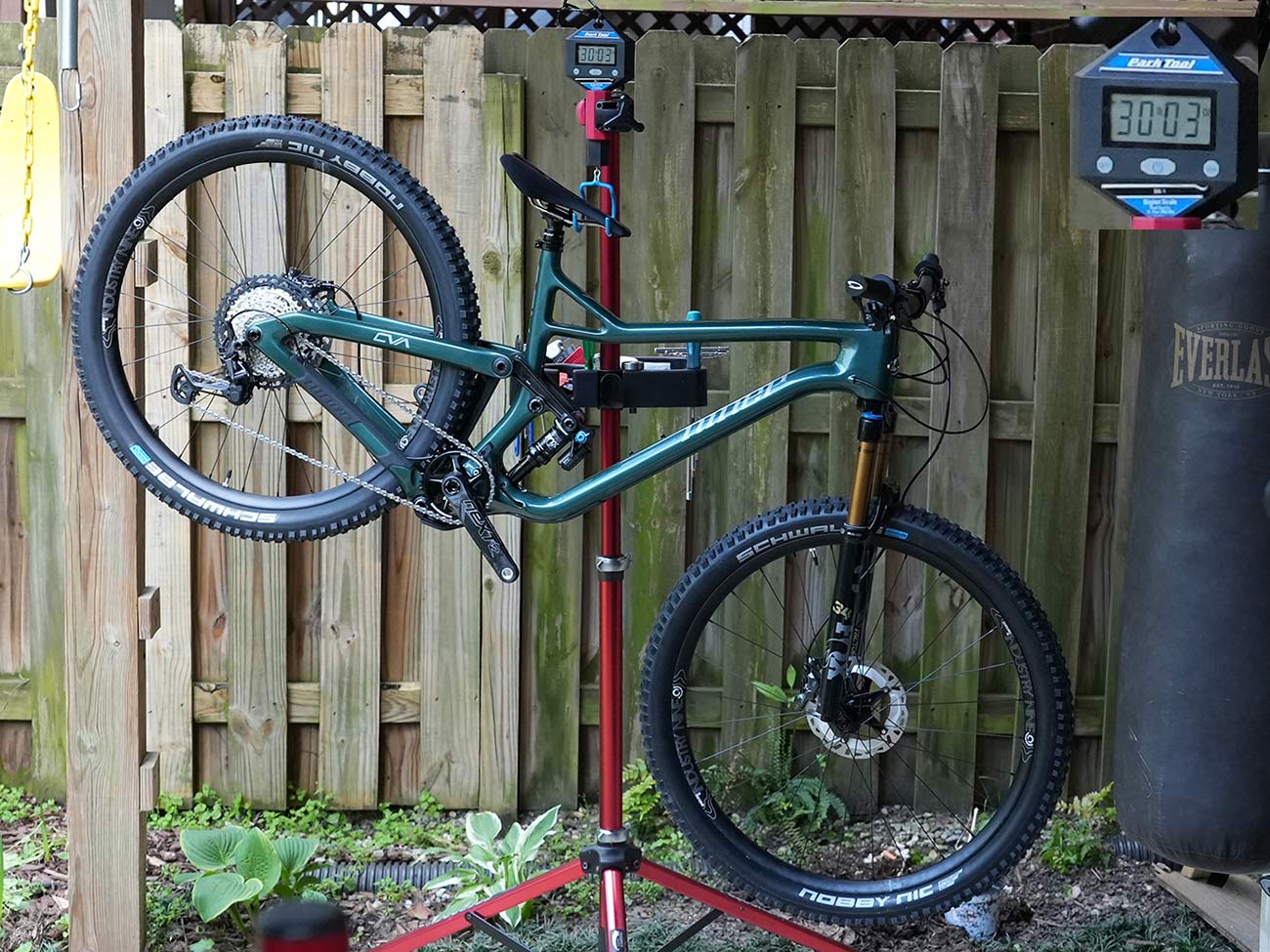 And here’s what it looks like with the mostly-correct suspension setup, except in Fox orange rather than the black fork that comes on the bikes: 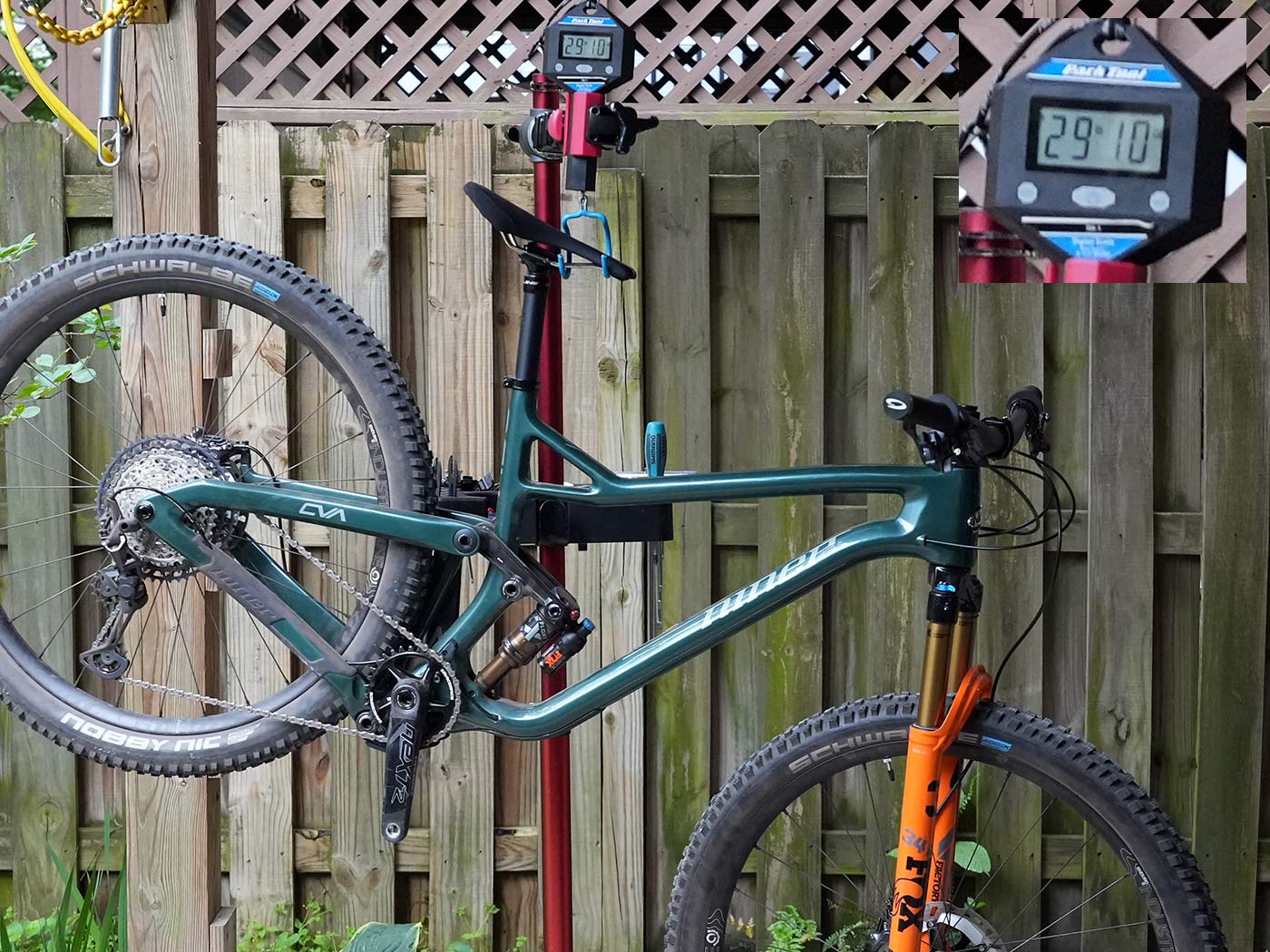 Factoring in the more robust frame is adding some weight over the prior generation, the rest of the build is already quite good, which means dropping a lot of weight will be a challenge. We’ll be hanging on to this bike for a while and making a few changes to see what we can do…I have some ideas.

But, out of the box, you can expect the actual weight for a size Large 2021 JET 9 RDO to come in just under 30lbs. My size Large test bike with mostly accurate suspension came in at 29lb 10oz (13.44kg)…definitely heavier than the prior model, but also more robust.

So, it’s a short travel trail bike, not necessarily a light trail bike.

It doesn’t feel heavy when riding, though. It’s still easy to pop and flick, easy to throw into a corner, and otherwise whip through the tight spots on a trail. 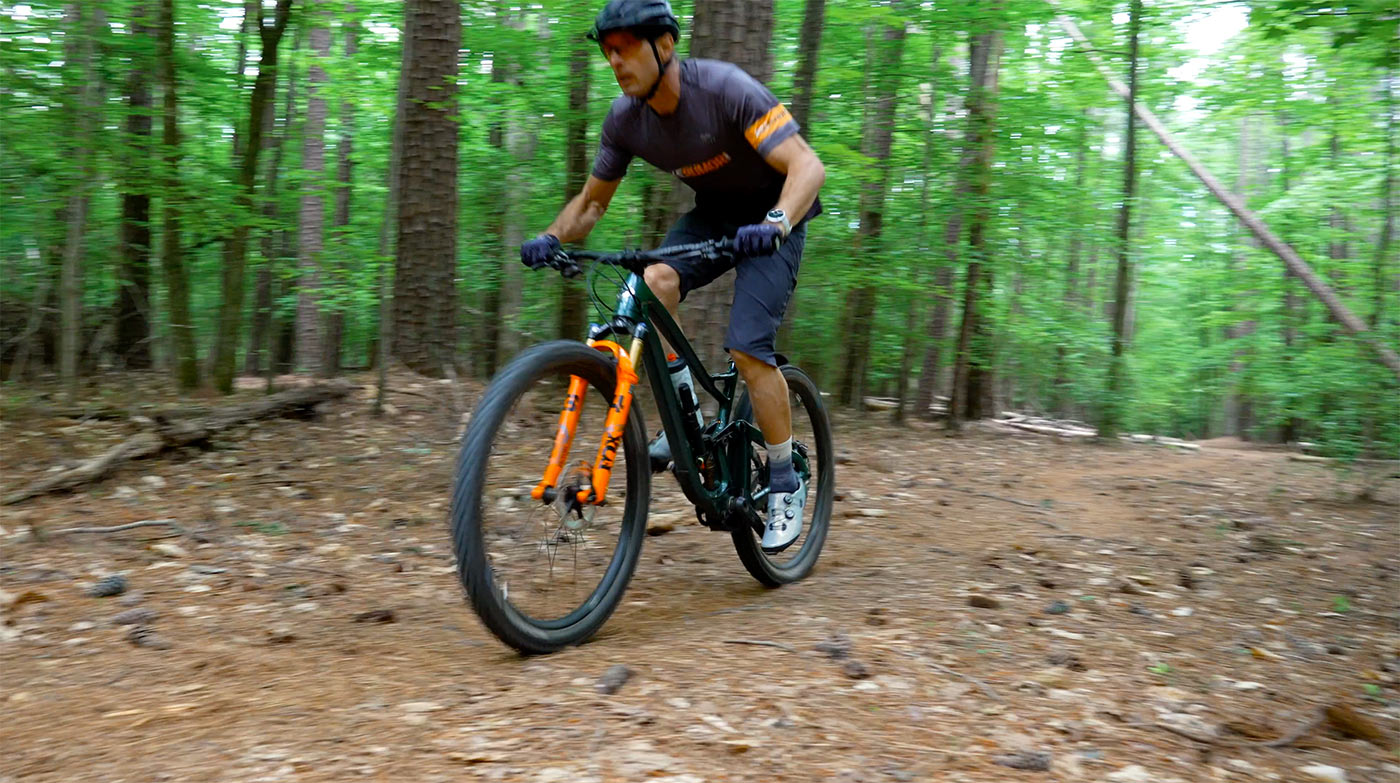 The action photos are either blurry because I’m so fast…or because I pulled them out of the video. I’ll never tell which.

I rode the bike in both, and honestly think I prefer High mode for our local trails. The handling was just a bit tighter, and it felt a little easier to weigh the front tire for hard, sharp corners.

The difference is subtle, but it’s noticeable. I probably won’t switch it around much, but it’s a nice feature to have.

OK, so what two things are bothering me? 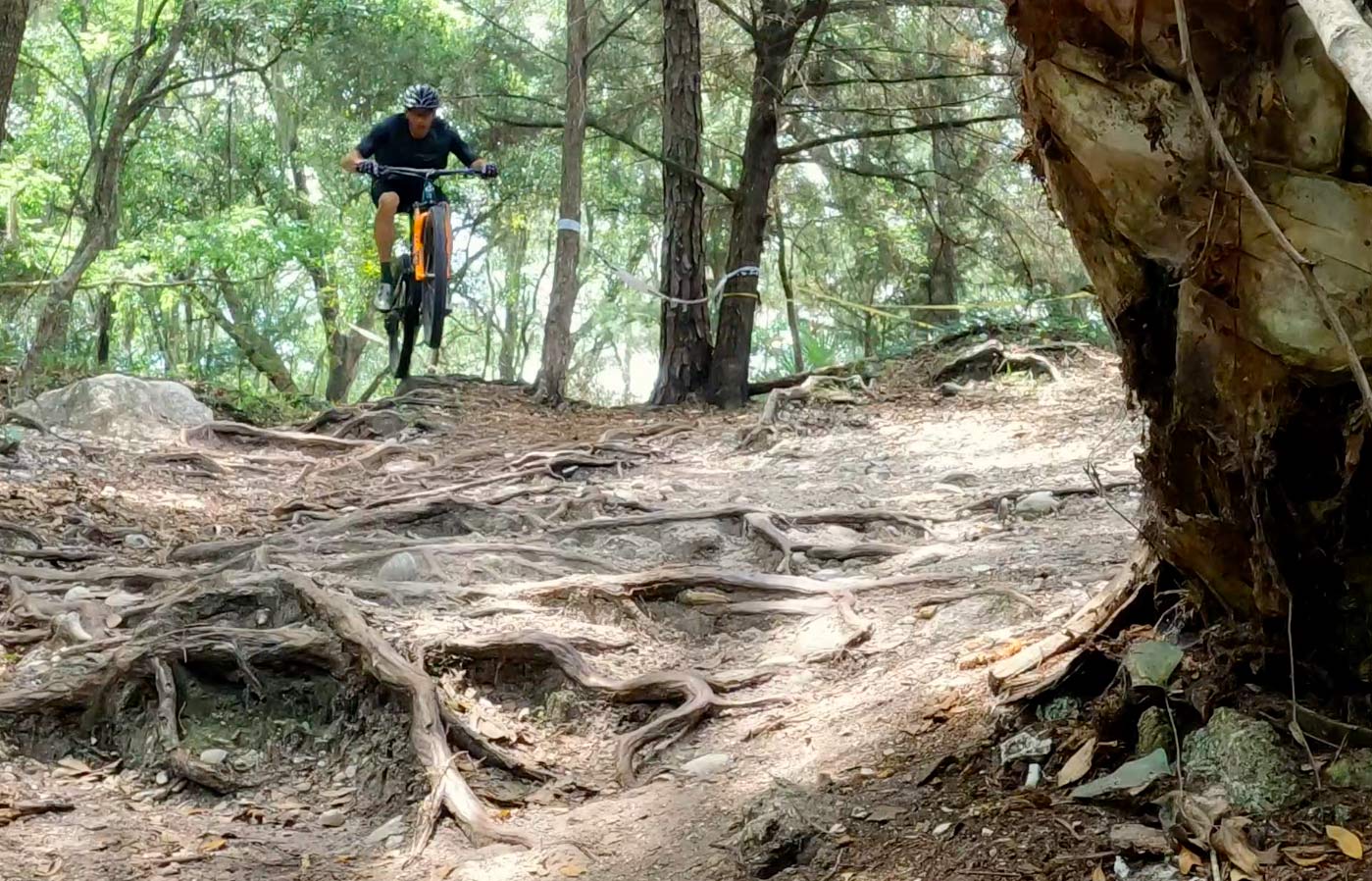 First, the weight is a bit of an issue, but I’m pretty sure I can scale back some of the bike’s aggressive spec to better suit our local trails. We’ll see, and I’ll keep you posted, and of course I can also put parts back on if I need a tougher build.

This honestly isn’t that big of a deal, but knowing where this model came from, it’s a little painful for me to watch it keep getting bigger and more aggressive when I loved the lighter, more XC-ish models before, too. If you’re new to the JET 9 and just looking for a ripper of a short travel trail bike, you probably won’t even notice the weight because it rides so well. 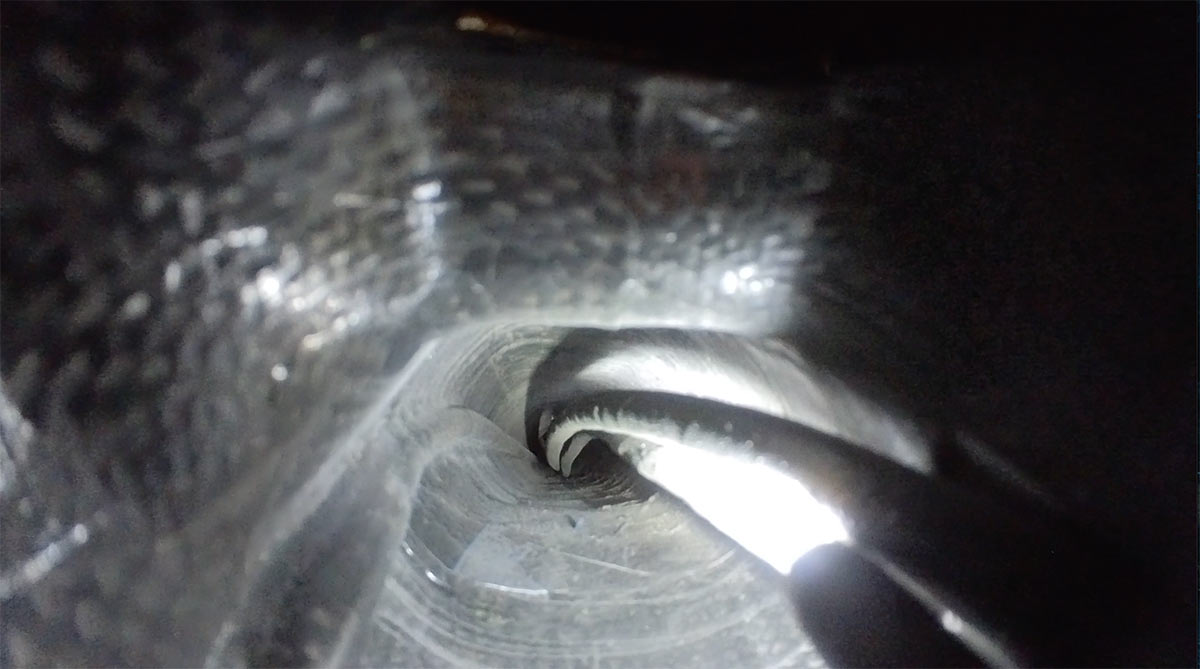 The main thing I’m sorting out is some cable rattle. Watch the video and you’ll get an inside look at Niner’s updated, full-length carbon tube cable guides. They’re great for quickly replacing brake hose or dropper/derailleur cable housings. But those hoses and housings seem to be ratting around inside those tubes, which makes it a difficult fix.

Until I saw that it actually had those fully enclosed tubes, I was going to stuff pipe insulation into the downtube…but that obviously won’t work now. So, I have some other ideas to try.

The rattle’s not a deal breaker, I still really like this bike. And I tend to stop hearing it shortly into a ride. But, at least on my bike, it’s present over repetitive roots or other rapid-fire hits. 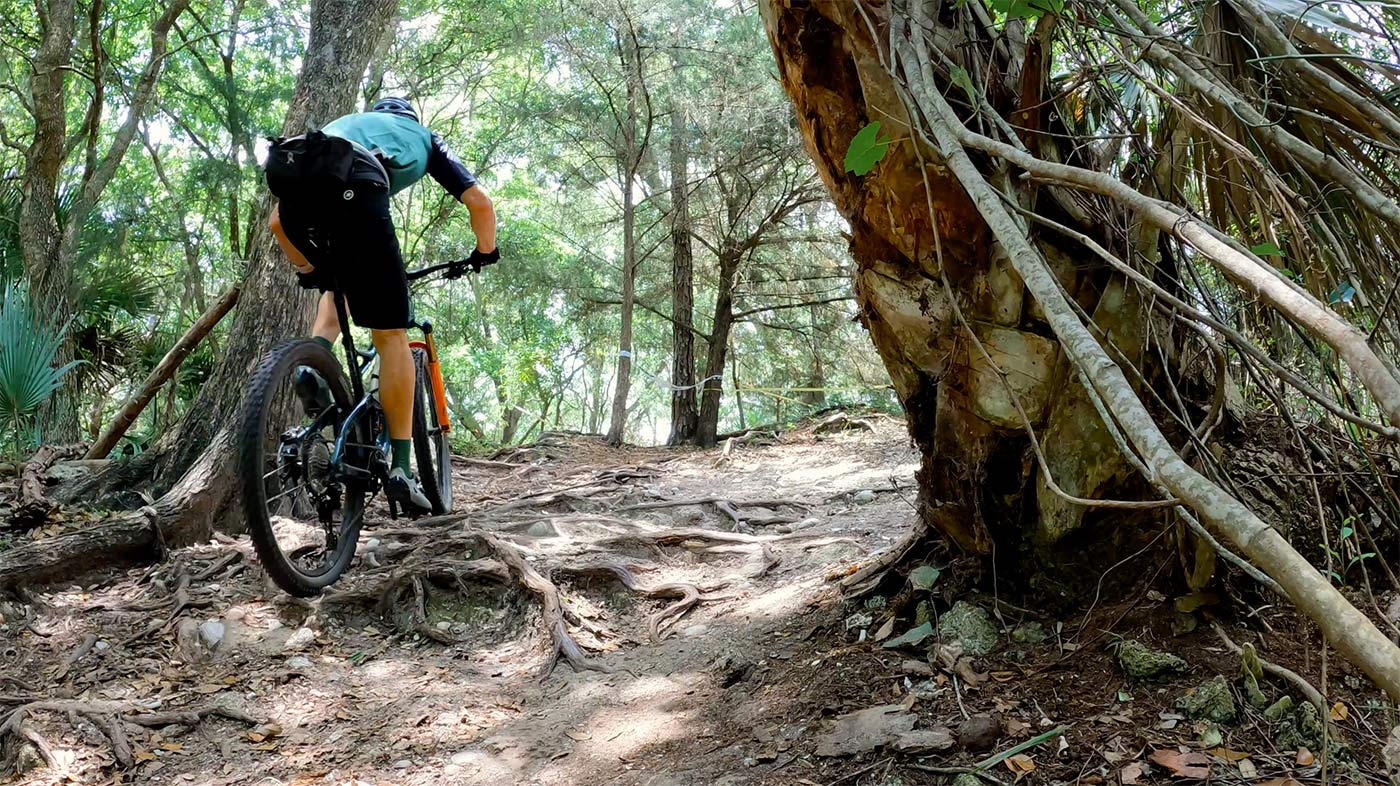 Watch the video, it shows off everything you need to know. Here’s the nutshell:

The new Niner JET 9 RDO is a mature yet modern short travel trail bike that’s built to tackle the roughest trails, then quickly climb back to the top and rip down them again. And again and again and again. Try it, you’ll like it.

Those cables rattling around would be full stop a deal breaker. Hell I turn off YouTube videos when the riders bike is rattling around. It’s 2021, there is no excuse for shit to rattle on a bike any more. This is a huge fail on the part of Niner.

It is sad that Niner no longer has a full sus XC bike. They have increased the travel and weight of this bike out of this category.

@Bill Bartzen – The RKT is Niner’s xc bike. It took over XC duties from the Jet starting with the prior generation.

I like Niners. I had a beautiful blue rip rdo in XL from 2016-2020. I built it frame up and it weighed a touch over 28 lbs spec’d with enve wheels and bars, sram xx components. This new jet seems identical capability wise with slacker geometry ( thank god) and sits lower. Why so heavy though? My 2014 Scalpel ( used now only for races) and 2019 Habit 1 are lighter? I’m still tempted to simplifies and move to one bike but think 26-27 lbs is ideal so 30 for a large just seems heavy. Guess I need a demo ride.