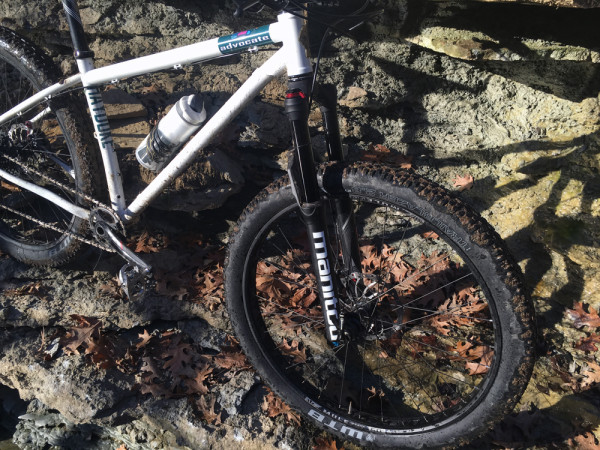 Things don’t always go as planned. I had just gotten the Advocate Hayduke in for review and couldn’t wait to finish the build. After the first look and weigh in of the frame, the parts were falling effortlessly into place until I ran into a problem. Somehow, in spite of owning almost every bottom bracket tool that was used during my days in the shop, I still didn’t have the right tool for the new threaded PF92 bottom bracket I planned to use. After a call to Abbey Bike Tools, a compatible socket was on the way. The Hayduke was literally in my stand when disaster struck.

After my injury, the bike hung there, taunting me. I couldn’t even get it down from the stand, much less finish building it, and I could forget about riding it. Slowly though, I started making progress. Forcing myself to get creative and finish the build with basically one arm, it was finally complete. The Hayduke served as the platform for my very first ride back on a real mountain bike trail, but there’s far more to it that makes it come highly recommended… One of the features that makes the Hayduke so appealing is its versatility. I know a lot of riders interested in Plus size tires, and some have even attempted to fit 27+ wheels and tires in their current 29er frames with varied success. The Hayduke is one of the first frames we know of that not only is built to run either 29 or 27+, but to also accept wheels with 142×12 or 148×12 Boost hubs. Combined with the adjustable dropouts which allow you to run single speed, you have a very capable frame.

The only caveat to this that I’ve found is that if you plan on running Plus tires, you’re likely to run a Plus compatible fork. That Plus fork then is likely to come with the new Boost 110x15mm spacing which means your current 29er front wheel won’t fit. That leaves you with two options if you want to use your current 29er wheels in addition to 27+ wheels – either replace the front hub with a Boost hub on the 29er wheelset, or keep two different forks. Front hubs are pretty cheap, so that would be my advice so you could have two wheelsets for essentially two bikes in one. Tire clearance is said to be 27.5 x 3″ or 29 x 2.3″, which seems like a true 3″ tire clearance with room for mud. The WTB Trailblazer is a 2.8″ tire that measures smaller. Fortunately there was still loads of clearance around the tire that should allow for something like the new Bridger 3.0″. The Trailblazer performed better than expected even with a very narrow tread profile. It’s only when you really start to push the tire in berms or quick changes in direction that it can become a bit unpredictable, breaking free and jumping or sliding out in the rear. Even with the smaller 2.8″ casing, the traction provided was amazing. My riding pressures varied between 12-15 psi based on conditions, and even when riding in my weakened state I was able to climb almost everything. Only in the worst conditions would the Trailblazer pack up with mud, and the tread seems to grip well through dry and wet leaves. Now that I’m back to hanging with my faster friends on bikes I would change out to a tire better suited to aggressive riding though.

Keep in mind that if you want to run 3″ tires with the Boost rear spacing you will need a Boost compatible crank or spider to make sure the chain clears the tire – set up in 29er mode or even with 2.8″ tires, the non-boost crank should work.

Really, the only fault I can find for the frame is its weight. At 6 lbs 10 oz (3.01kg), it’s not light. A lot of that is likely the dropout system which uses thick plates and big bolts, but the trade off is the frame’s versatility. Built as shown above with a SRAM GX 1 drivetrain, Sun Ringle MuleFut 50 SL wheels, my awesome modified Magura MT 7 brakes, and Manitou Magnum fork, that equals about a 30 lb (13.6kg) bike. Fortunately, the ride completely hides its heft, and of course it could be built much lighter than my build. Something about the way the big tires maintain their momentum makes it ride like a much lighter bike – to the point my riding buddies were jealous how well it floats up rooty climbs. Yes, the Hayduke runs a press fit bottom bracket. However, I’m almost embarrassed to say in all the bikes I’ve personally owned or tested with press fit shells, I’m yet to find one that made the slightest bit of noise. That’s not to say that I haven’t worked on bikes at the shop with press fit shells that had creaking issues, but on bikes that I’ve personally built and serviced, so far so good. Just wanted to put that out there.

The same goes for the Hayduke. I probably preempted any creaking by just going straight for the Wheels Manufacturing threaded PF92 bottom bracket, but whatever the case – it’s quiet and happy. As I alluded to at the beginning, just make sure you have the proper installation tool for the BB. The splines are very thin so it essentially requires a socket type tool like that from Abbey Bike Tools (the newest version of their BSA30 tool) or others.

If you have a Plus bike, chances are good that you’ll find yourself in muddy, sandy, or wet environments that aren’t friendly to cables. For that reason I’m happy for the decision to run full housing on the Hayduke. The zip-tie cable anchoring system isn’t sophisticated, but it is simple and provides a few options for routing including the Stealth dropper routing which tucks in at the bottom of the seat tube. If there was one sentence to sum up the Hayduke (in 27+ mode), it would be that it’s a hardtail that doesn’t ride like one. In a good way of course. Over the course of my recovery, I was very sensitive to impacts felt through the handlebar. Only my most plush full suspension bikes could match the ride feel of the Hayduke. Obviously there is a bit of a tipping point based on the trail features, but for the average cross country rides, the plus tires mixed with the Manitou Magnum fork and Reynolds 725 chromoly tubing were sublime. It’s that steel ride quality riders go on about, only better.

The ride quality would probably be enough to sell the bike, but the geometry is dialed as well. The Hayduke is a trail slayer that isn’t afraid of drops while still happy to hammer up climbs. I’m only 150 lbs, but I would have to imagine that bigger riders would find the frame just as stiff (in the right ways) especially considering Advocate’s founder Tim Krueger is a modern viking himself. Now that I’m back to riding somewhat normally, the Hayduke is just one of those bikes that’s really easy to let it fly through the woods. Somehow it seems equally suited to aggressive cross country riding, or loading it up with bags to take it for an epic bike packing journey.

While I was able to briefly try out the Hayduke in 29er guise, if I owned the bike I doubt it would ever leave 27+ mode. One thing is for sure though, since I am not looking for a race hard tail, after riding the Hayduke I would have a hard time buying a hardtail that wasn’t compatible with Plus size tires. Combine that with the fact that Advocate donates their profits to cycling advocacy and frames start at $750, and you have a bike that is very hard to resist.

Advocate Cycles is now shipping production Haydukes along with the Watchman fat bike in both Reynolds 725 chromoly or double butted 3/2.5 titanium. Check out our initial look at the frame for complete geometry and weights, plus more on the Advocate business model with Tim Krueger.