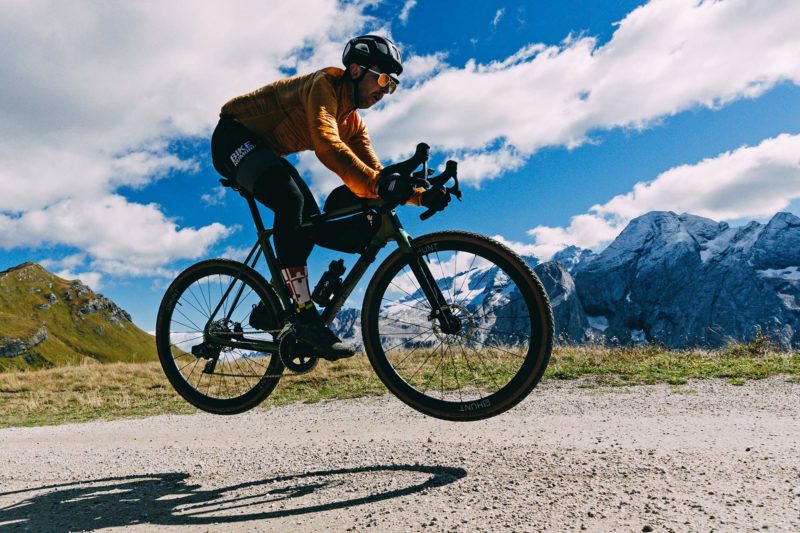 Just over a week ago, Basso debuted their updated, made-in-Italy carbon Palta II gravel bike. While some gravel bikes try to be everything to everyone, the original Palta wasn’t afraid to embrace its on-road racing heritage, sticking to what Basso knew best as a gravel road bike.

Now, this new Basso Palta II is bigger, faster, and more capable off-road. Yet it manages all of that without giving up the quick road handling that made it unique from the start… 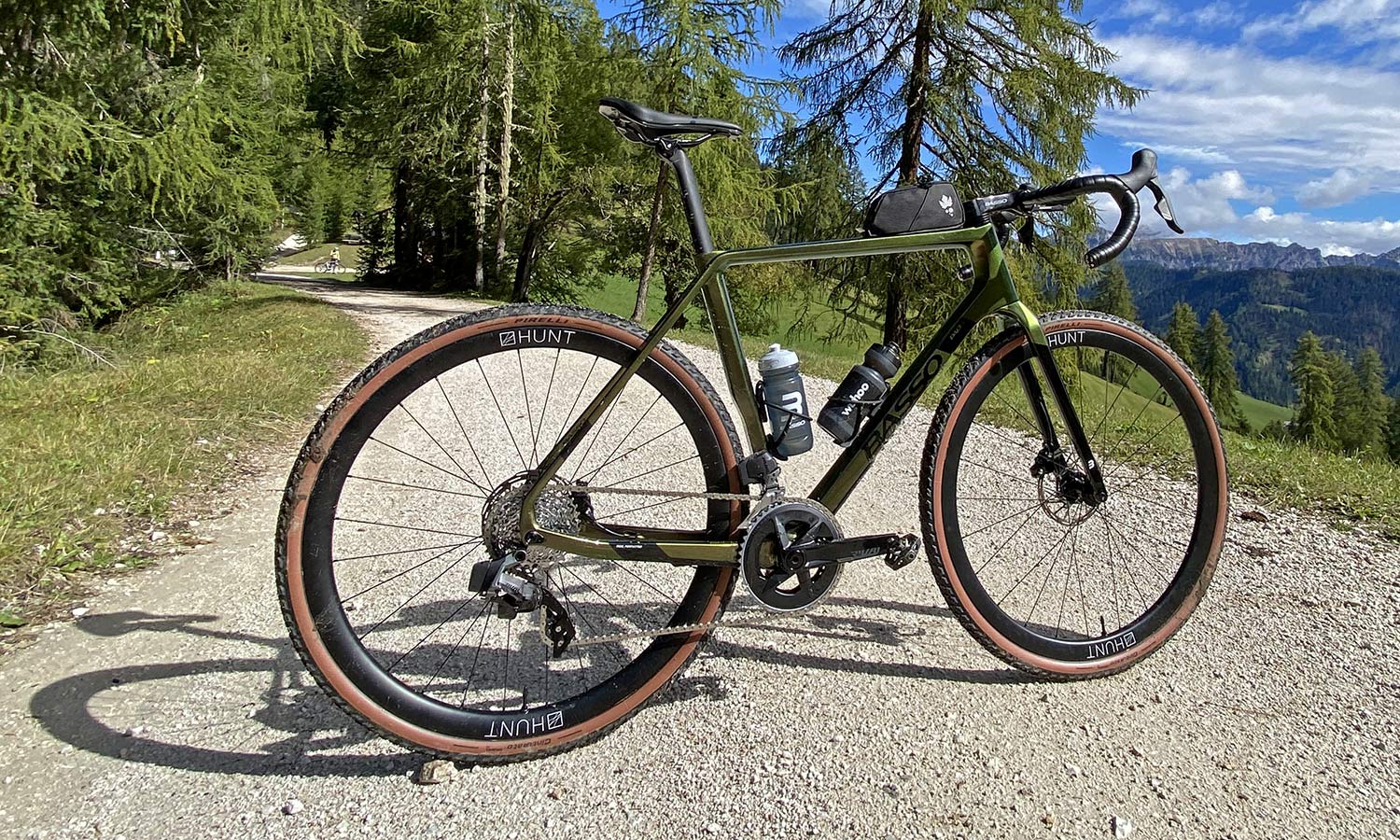 We took the new Palta II up into the steep climbs of the Italian Dolomites to see how the new bike has evolved. Riding the updated carbon gravel bike over well-known road climbs, new-to-us gravel passes, and even familiar mountain bike descents, it became quickly apparent that the Palta II is more versatile than the original while feeling as fast as ever. 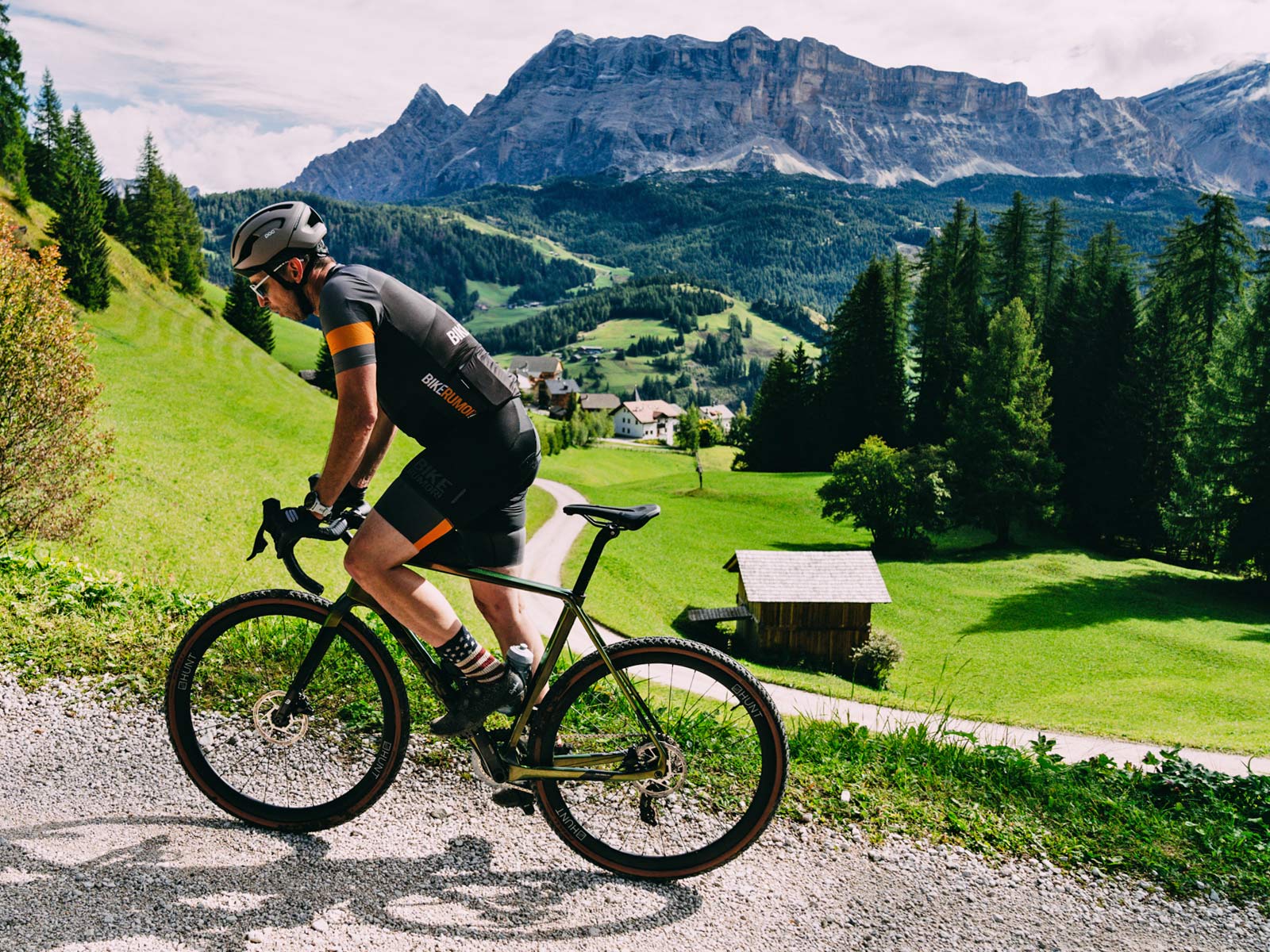 We break down the full details on the new bike in our separate bike launch coverage of the new 2022 Basso Palta (here).

But suffice it to say that the key changes are: 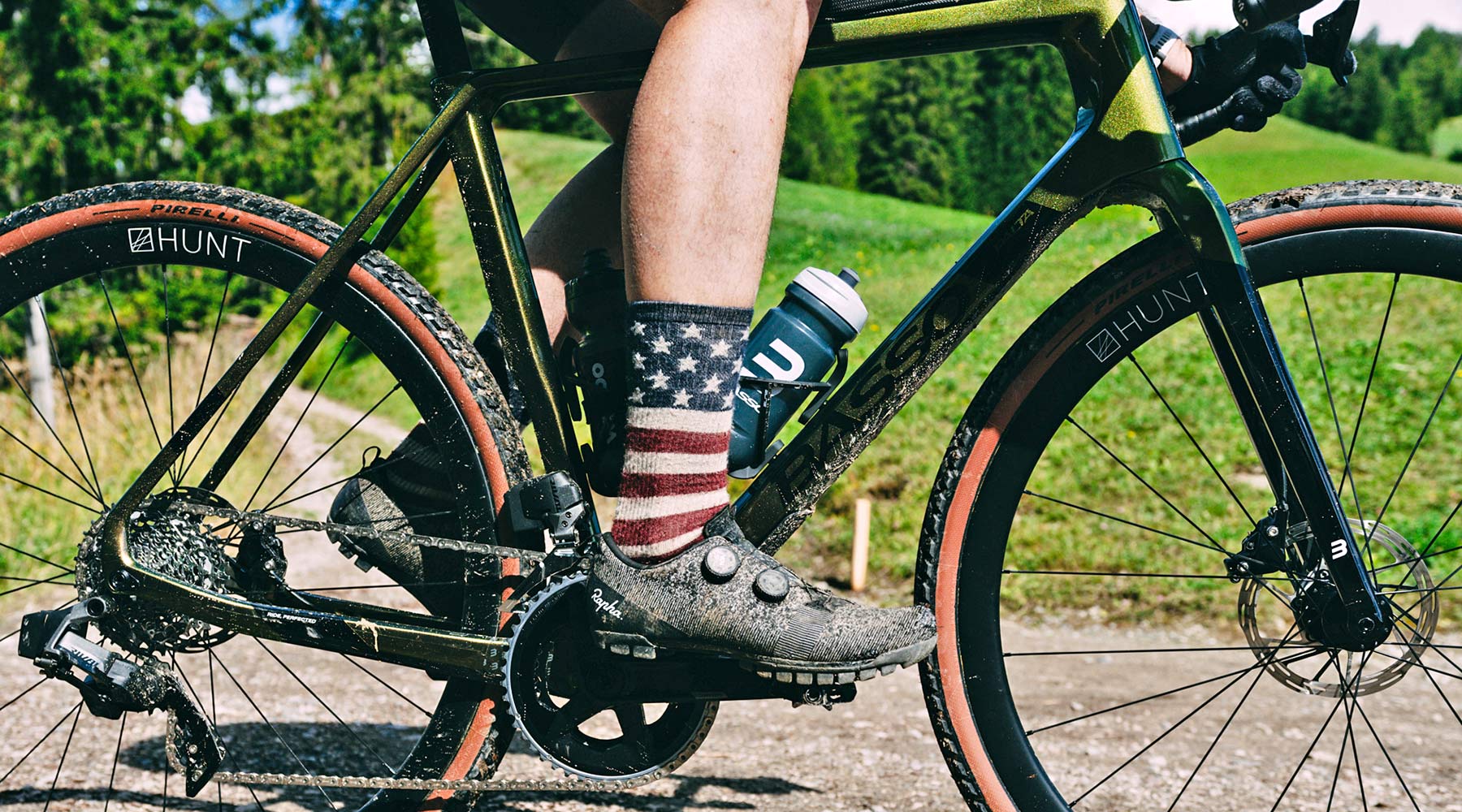 The new Palta II is still 1x or 2x compatible giving riders/buyers the opportunity to tailor builds towards how they plan to ride – more or less on- or off-road, or rather over steeper or more tame terrain.

5mm larger tire clearance doesn’t seem like much, but room for 700x45mm or 650×2″ tires puts the new bike into proper adventure gravel territory. Add in two regular bottle cages inside the main triangle, and third under the downtube, and a toptube bag mount to make the bike more bikepacking-ready – but no fork cage mounts.

I didn’t get a chance to use it, but Basso says the new bike will come with a removable lever for the thru-axles that incorporates 4mm, 6mm & T25 tooling. Developed to be able to tighten any bolt you have on the bike, it should mean you won’t need a separate tool for any regular roadside adjustment. 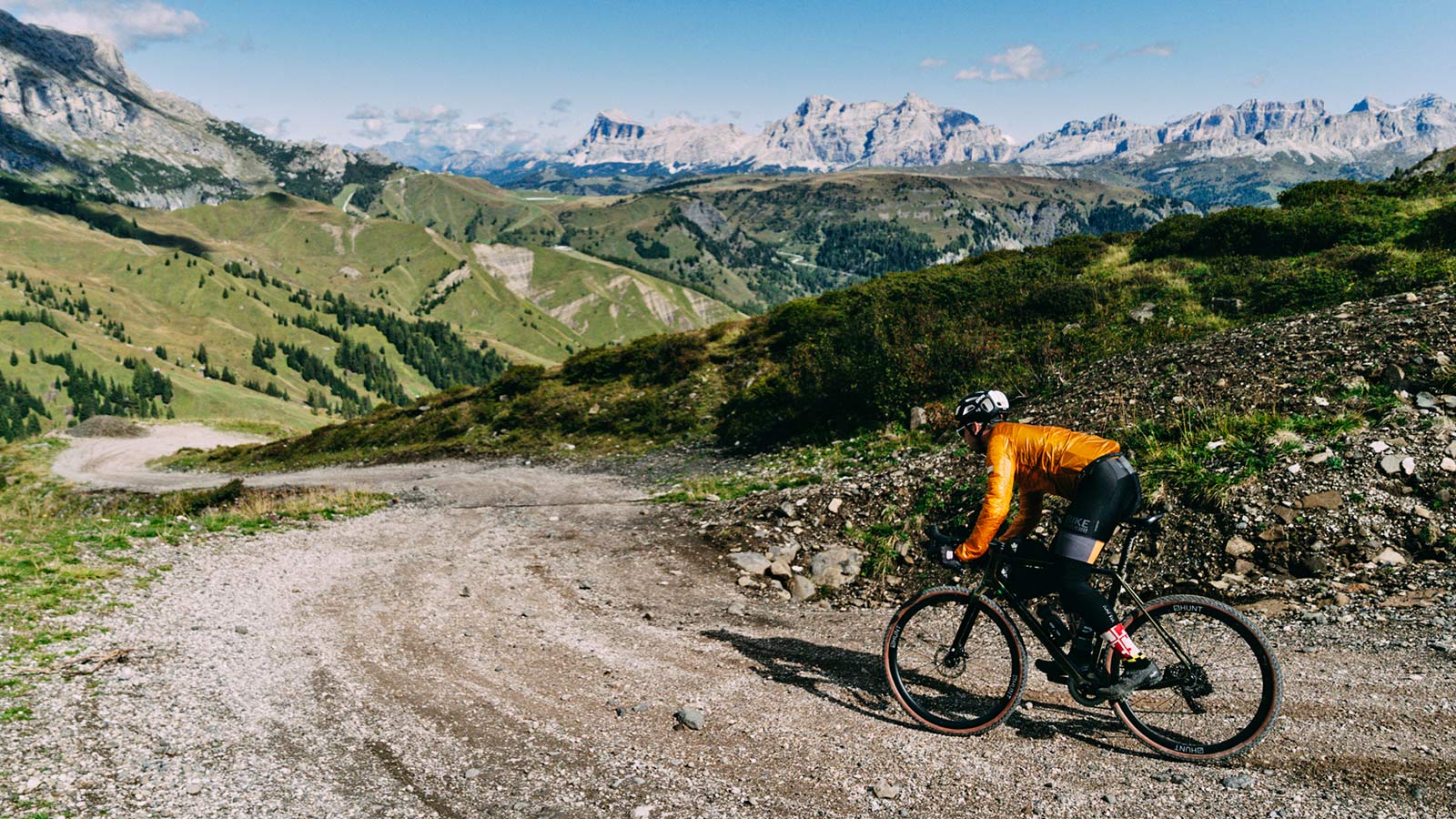 What remains unchanged is essentially the road-inspired geometry of the original Palta that made it feel so quick. Core head and seattube angles are the same. Palta II frame Stack & Reach figures do get slightly tweaked, but really only to allow for the most commonly used bar setup positions, with fewer spacers under the stem.

Rider weight balance does shift back a bit to make the bike feel more stable off-road. Basso did this by shortening chainstays by 5mm (even while expanding tire clearance) and offsetting the fork forward at the same time, while the rider stays centered over the bottom bracket with the consistent frame reach. 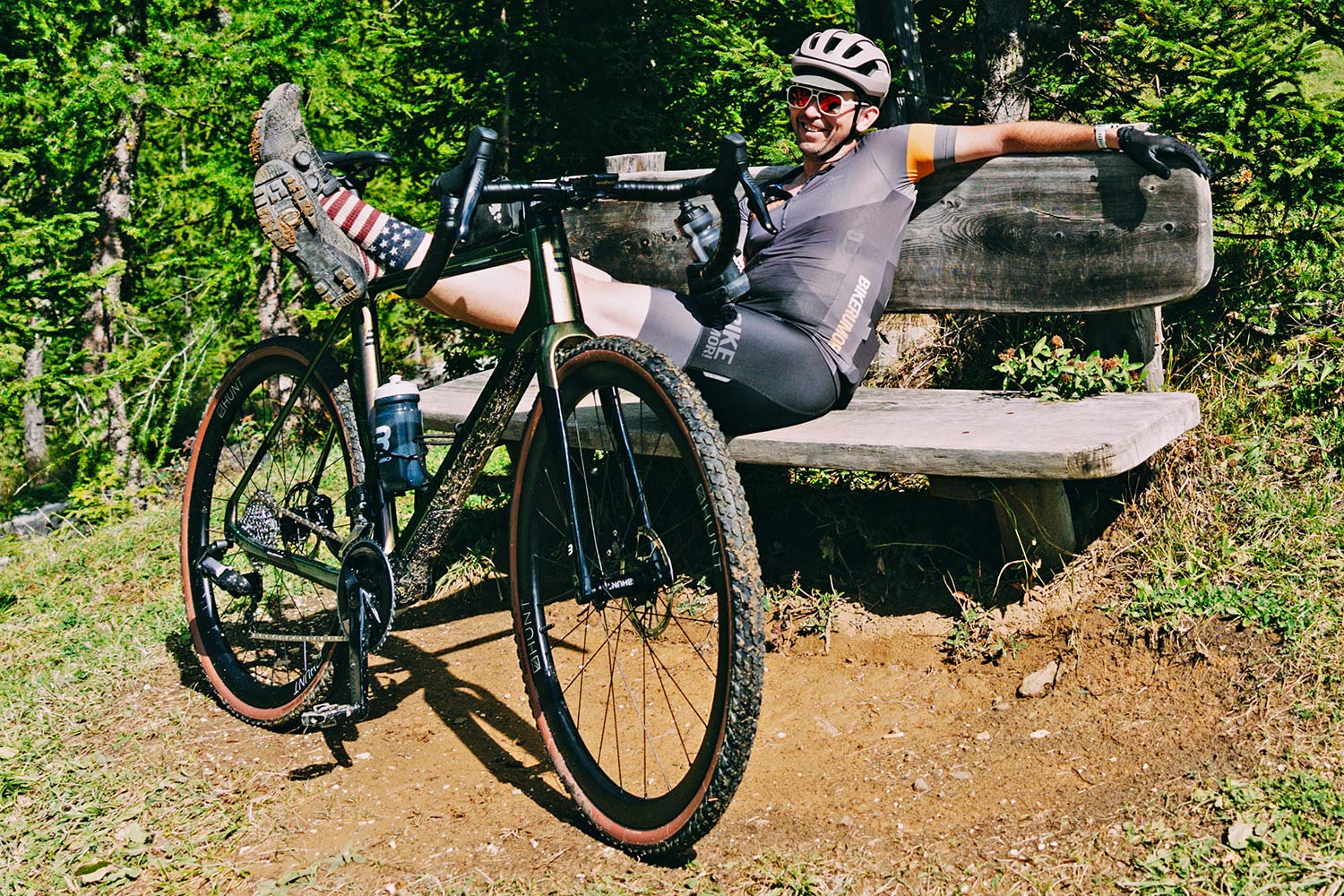 All of that amounts to a more well-rounded gravel bike. Just as ready-as-ever to climb big mountain passes, on either tarmac or gravel. And more capable of bombing down long, steep, and loose gravel descents.

I already enjoyed riding the original Palta, because I can get behind the idea of riding a super-fast bike on the edge of control – stomping up climbs, sliding through washed-out corners, and spinning out on fast hardpack downhills. But admittedly that bike wasn’t for everybody. It required a certain combination of technical road and off-road bike handling skills, and always-on attention. 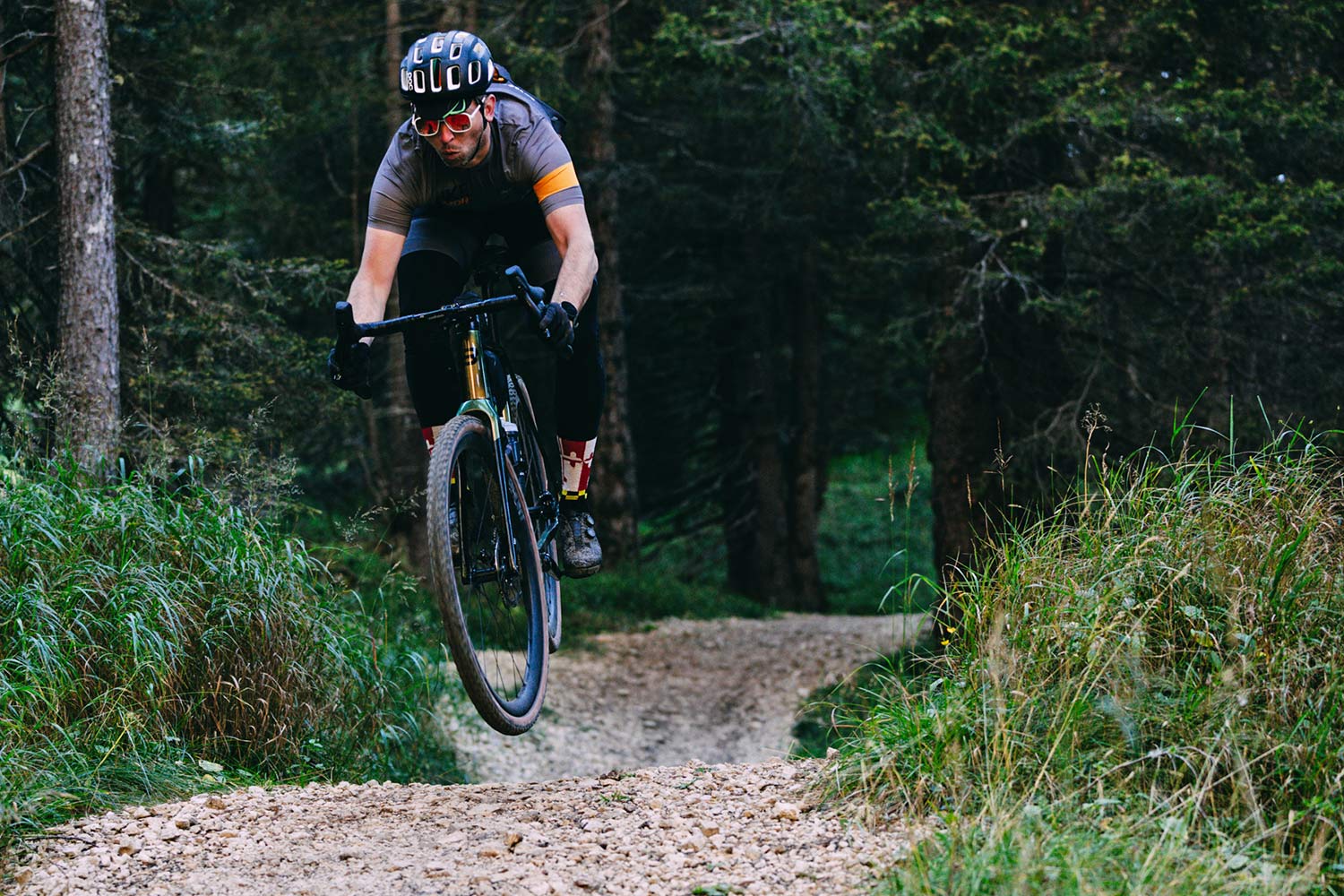 The slight rearward shift in weight balance lends a more confidence-inspiring ride going downhill. It even feels more in control hucking it off rollers and tabletop jumps in an Italian bikepark… not that I would do that with a carbon gravel bike or anything. 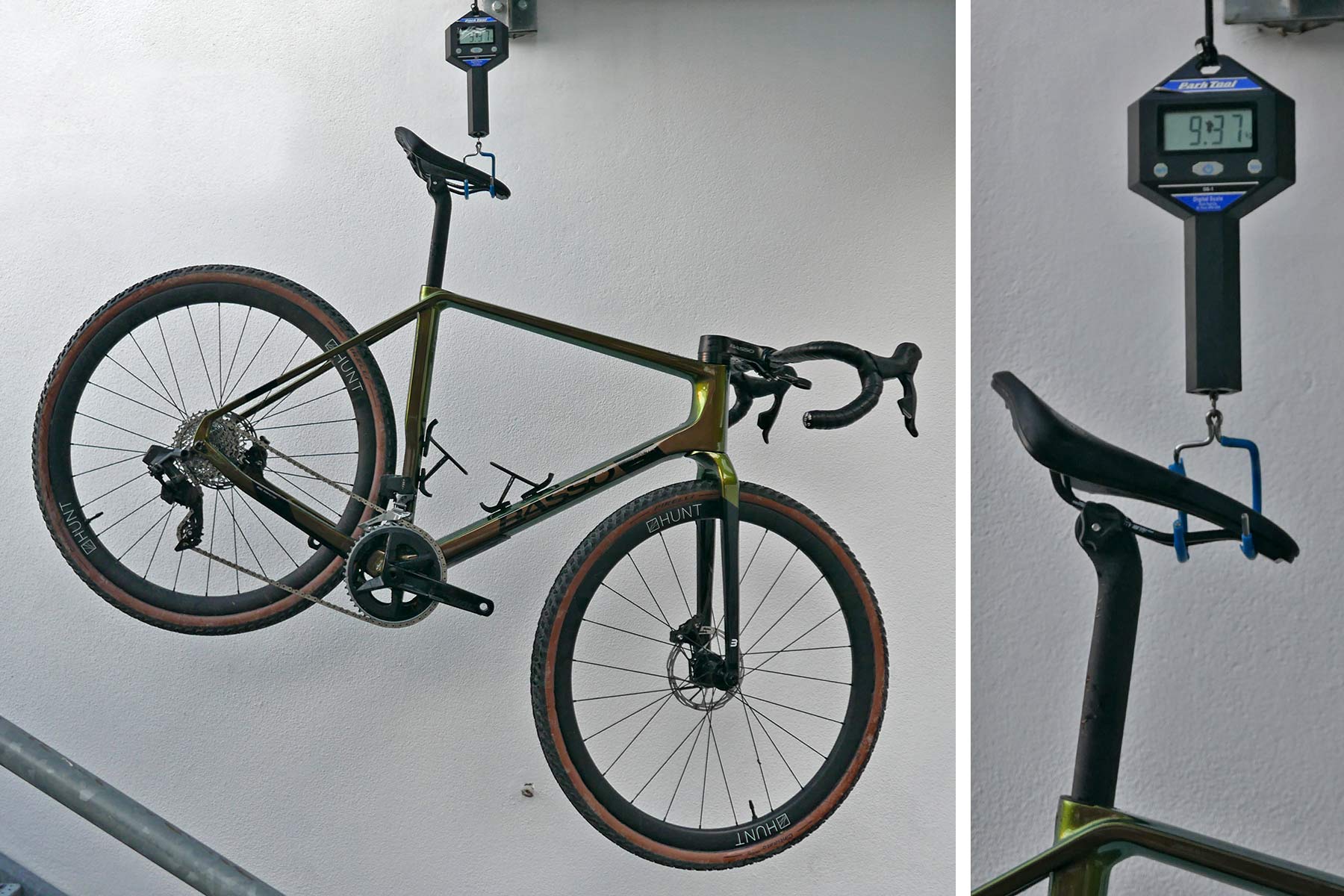 So far, we haven’t actually received any official weight claims from Basso about the new Palta II frame or frameset, other than a vague statement that it employs more sophisticated to weight the same as the previous Palta, maybe even shedding a few grams. But we do have some actual weights to suggest that statement seems reliable.

Comparing what’s different vs. the original Palta build I tested at 9.07kg w/o pedals (Palta II build is +150g groupset, -200g wheelset, +50g mounts) I would have expected this new bike to be that same weight. Instead, it is 300g heavier, which could also be accounted for by a heavier integrated cockpit, headset, saddle, seatpost & even fork.

Anyway, it all comes out pretty close, suggesting the new frameset is effectively the same weight as before. The Palta II isn’t a superlight gravel bike, but it never felt weighed down – especially not in that bikepark.

Impressions on the little details 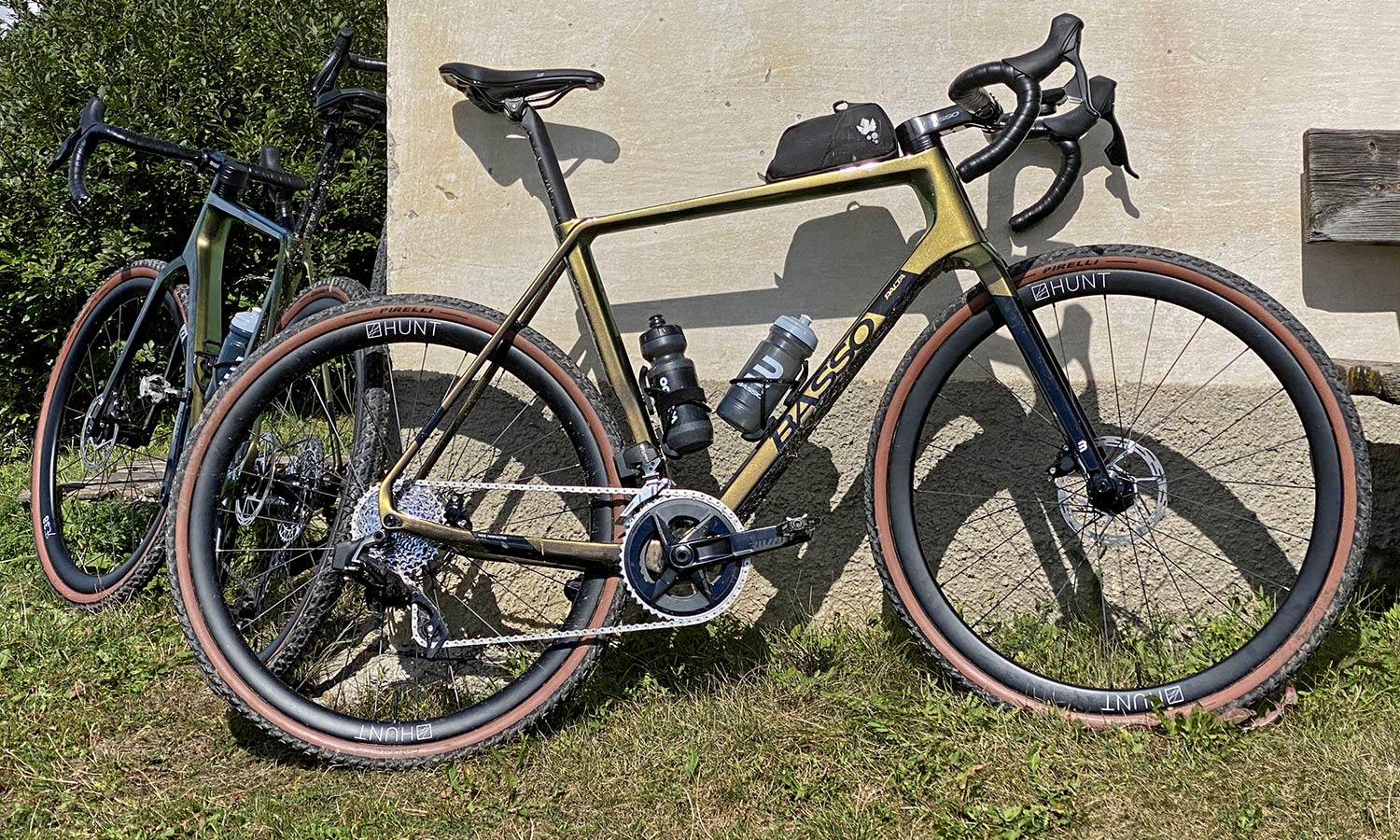 Another interesting addition is new paint for the new Palta II. First, Basso added a simple all-black option and a new Stone gray that is essentially the same matte primer gray they used in development testing. But the bike I rode was Poseidon green.

It’s only one color in all the photos here, but it changes pretty much however you look at it. The glittery color-shifting paint varies from almost gold or bronze from some perspectives, all the way to a deep forest green when seen in the shadows under the tree canopy, to purple when the light hits it right.

Paint color is obviously a minor technical feature, but it makes the bike look really striking in person. 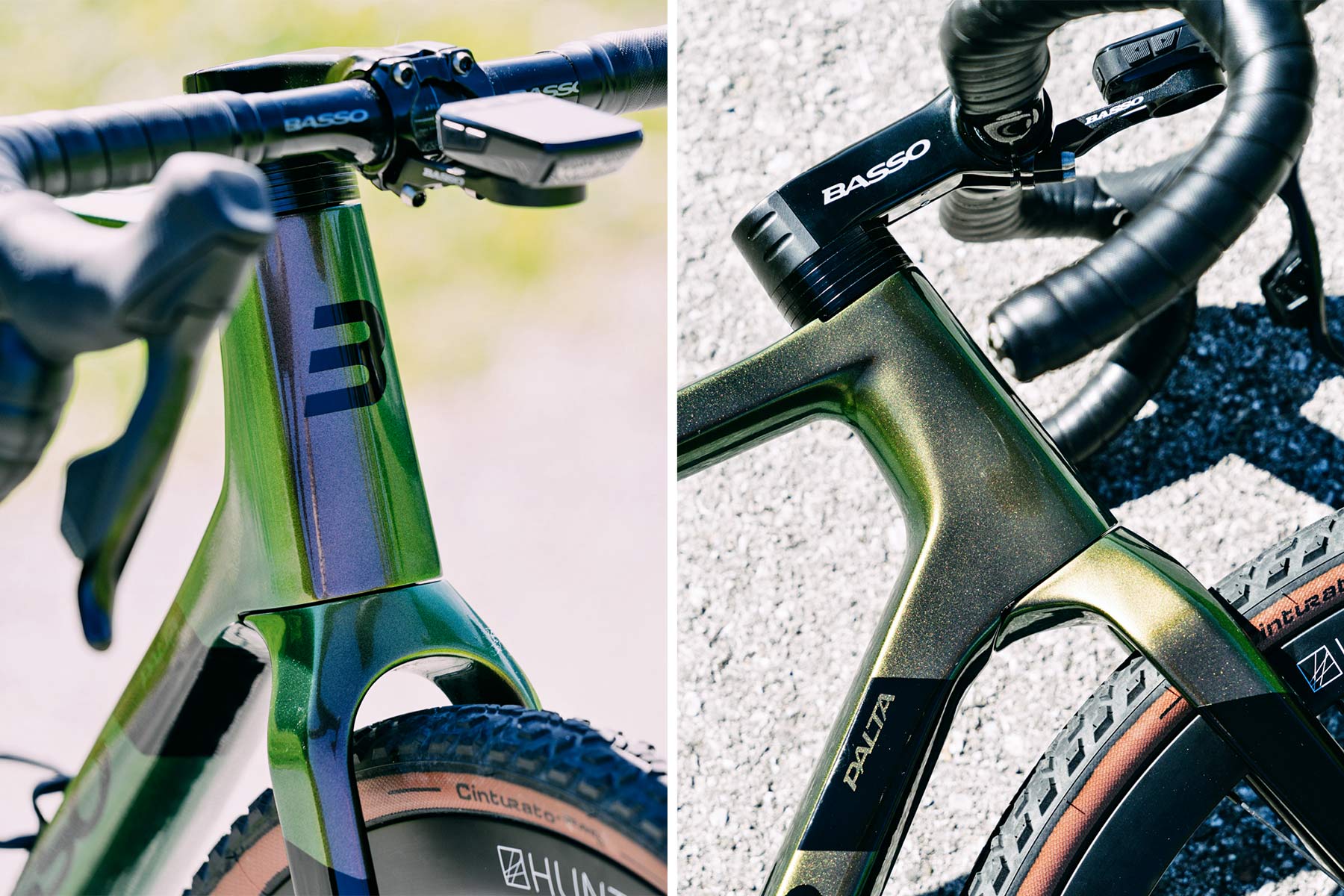 One of the few things I don’t really like about the complete bike setup has to do with Basso’s new ergo carbon gravel bar, developed just for the newly integrated bike.

The fit of the bar in your hands is great, actually – with slightly tear-dropped aero tops, smaller diameter drops that allow for thick bar tape without getting bulky, and a ‘just right’ small amount of 8° flare to the drops. 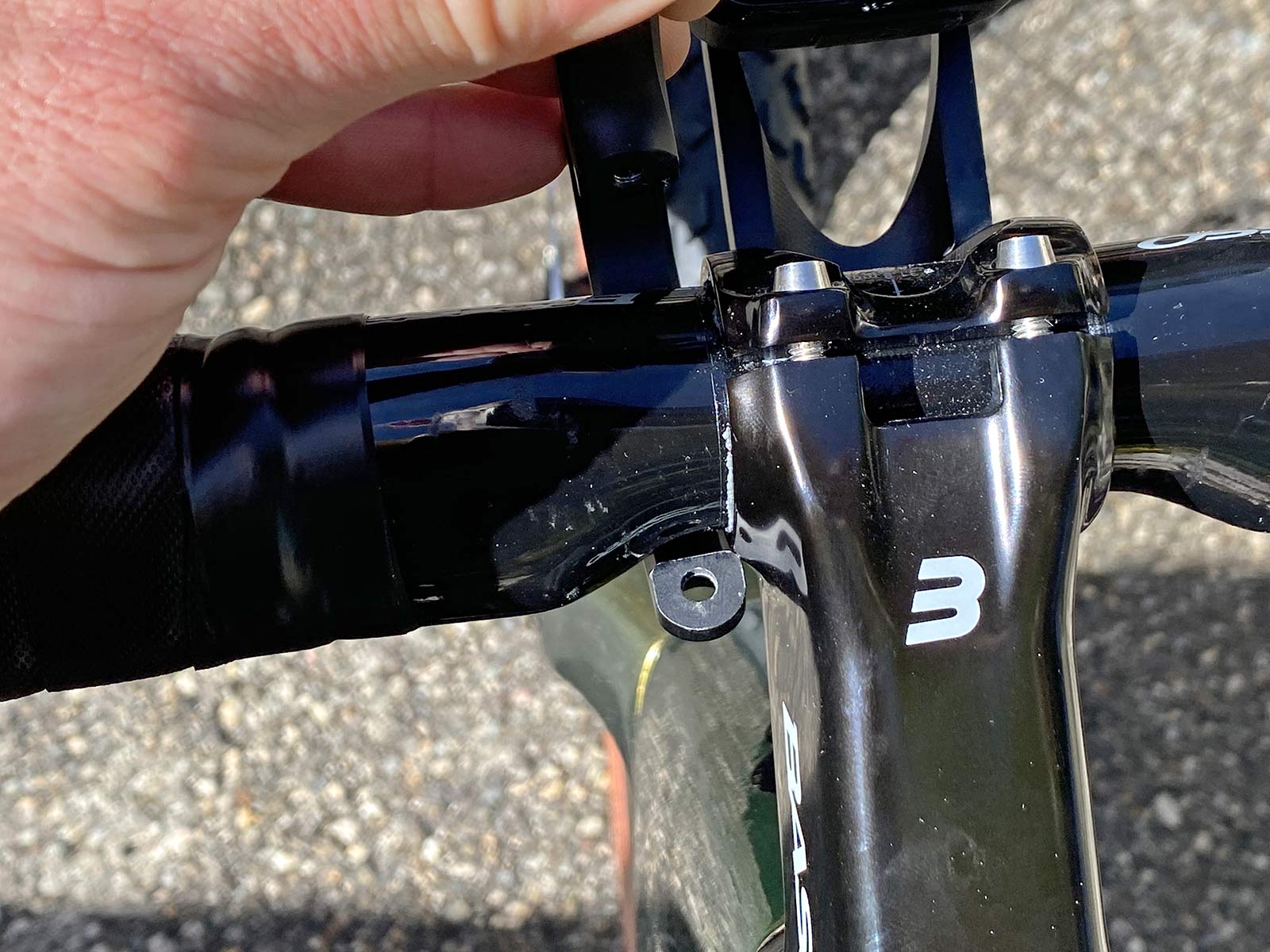 But in order to route all the cables inside the stem and create a clean-looking setup, there is no round clamp left next to the stem to attach any accessories – say a headlight, alternative GPS mount, or my trusty Quad Lock phone mount (attempted unsuccessfully, above). The stem does include a direct bolt-on faceplate mount for a GPS and either a small light or camera via GoPro tabs below, but…

For a bike that now has much more adventure riding capability, riders will likely need more accessory mounting options. And I personally prefer the ability to adjust the angle of any screen on my bike for better viewing, in any case. 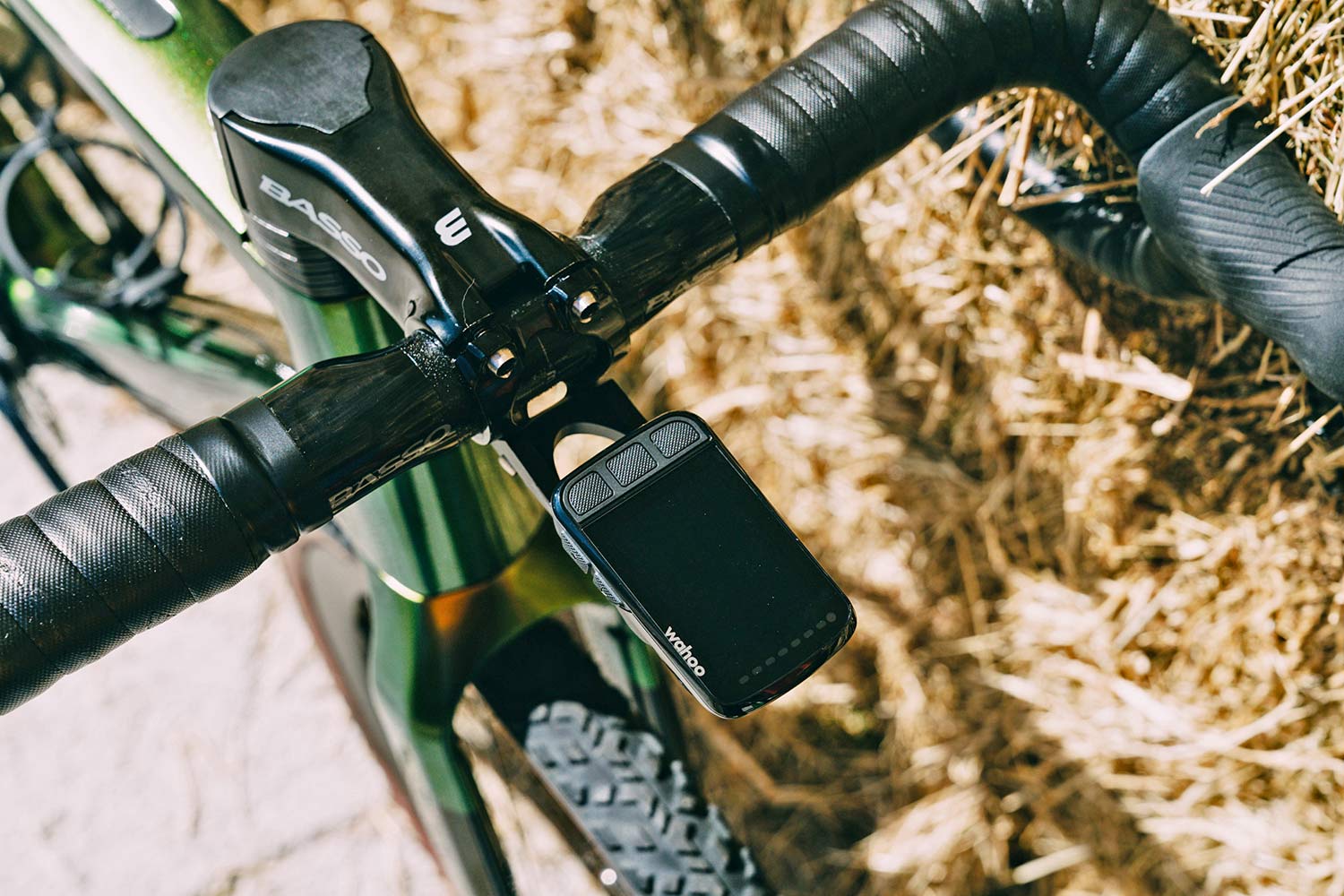 If I mount a handlebar bag, that out-front mount would have to go. And I’m going to have to resort to rubber bands around the stem to mount my GPS for navigation.

There’s a simple fix in that Basso could extend the round 31.8mm clamping area 1cm extra on either side of the stem in ints next iteration. Otherwise, riders are going to swap to another round gravel bar with integrated routing. 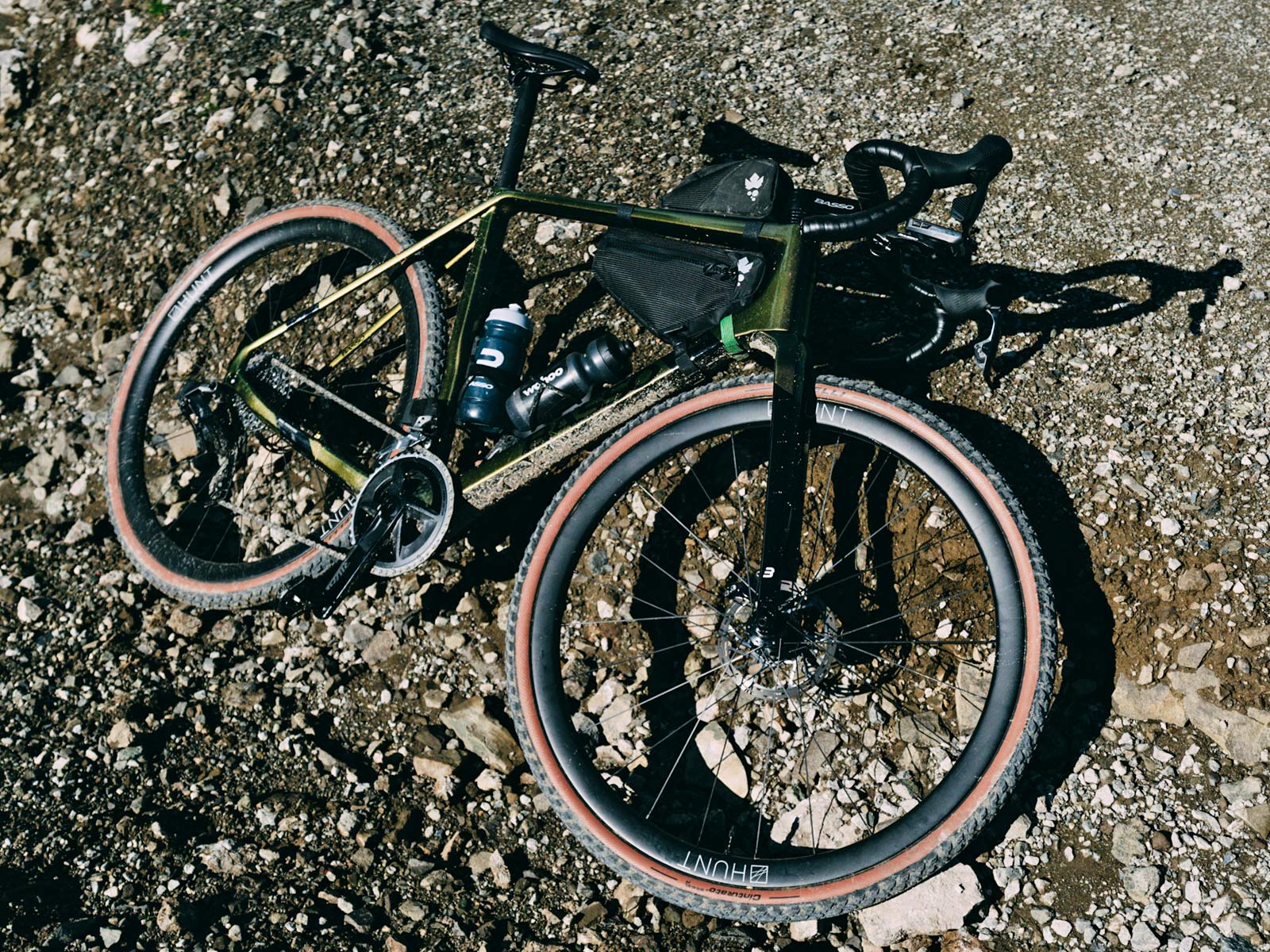 Now one great, tiny feature of the new Palta II is its new direct mount toptube attachment. This style of bag mount is quite common now, but Basso coordinated with Italian bag maker Miss Grape to perfectly place the bolts for their new Node Road bag. It sits perfectly, just behind the stem.

What’s unique, the Basso Palta II recesses the bolt bosses a few millimeters below the surface of the toptube, with a little rubber cover overtop for those riders not running a bento bag (see 2 photos above). The result is that when you tighten down a direct mount bag, it’s a more stable & secure feeling than any other toptube bag I’ve ever used.

It’s stupidly simple, and I love it. 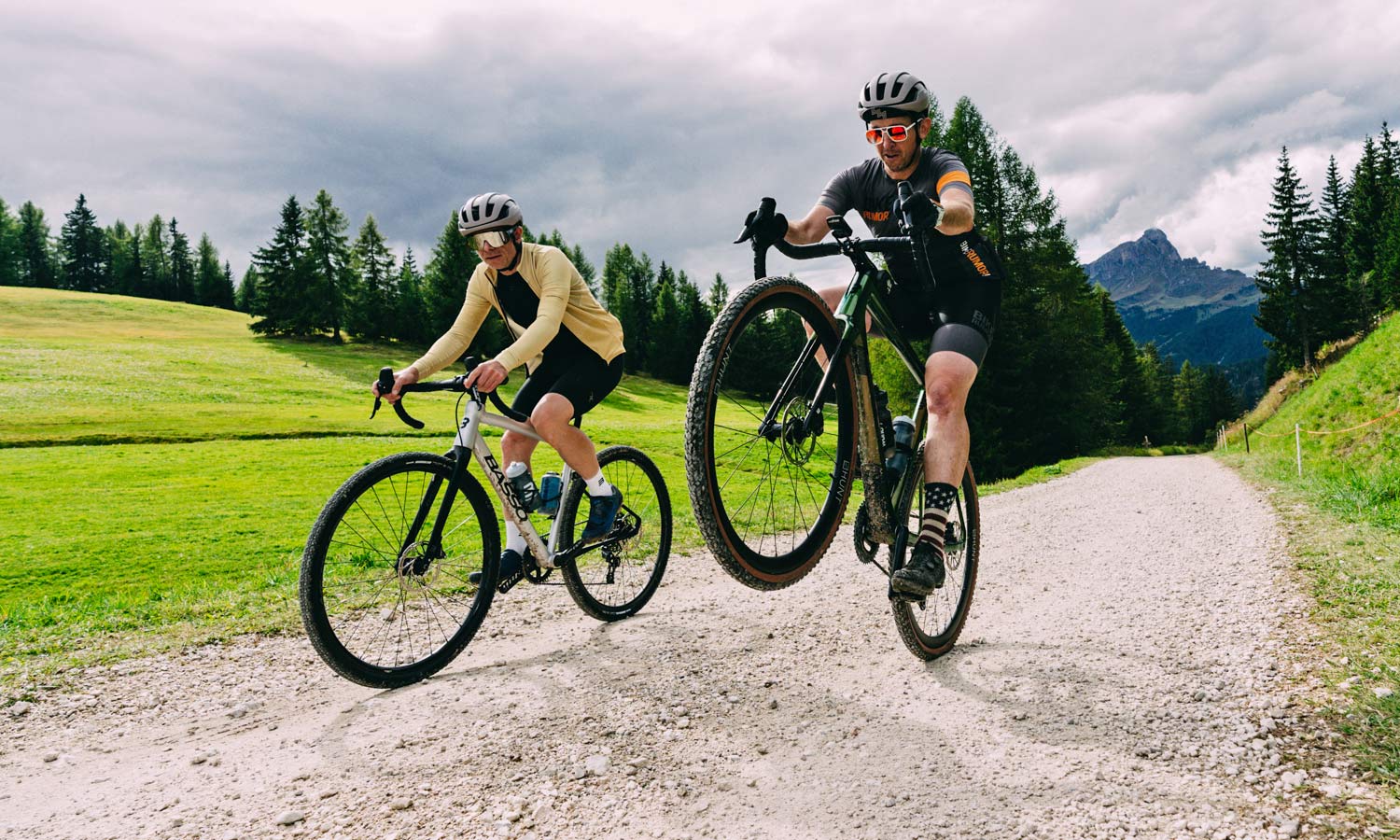 With almost all of the details solved, Basso’s new carbon Palta II is simply a more refined version of their own fast gravel concept, with more fun packed into it.

The most obvious bump in capabilities is the room for bigger 45mm tires. Probably the bigger story is that they fit bigger tires into 5mm shorter chainstays and the same frame angles, so it still feels just as nimble. And by putting rider weight a bit further back over the rear wheel, the ride is simply more stable & controlled when descending steep or loose terrain. 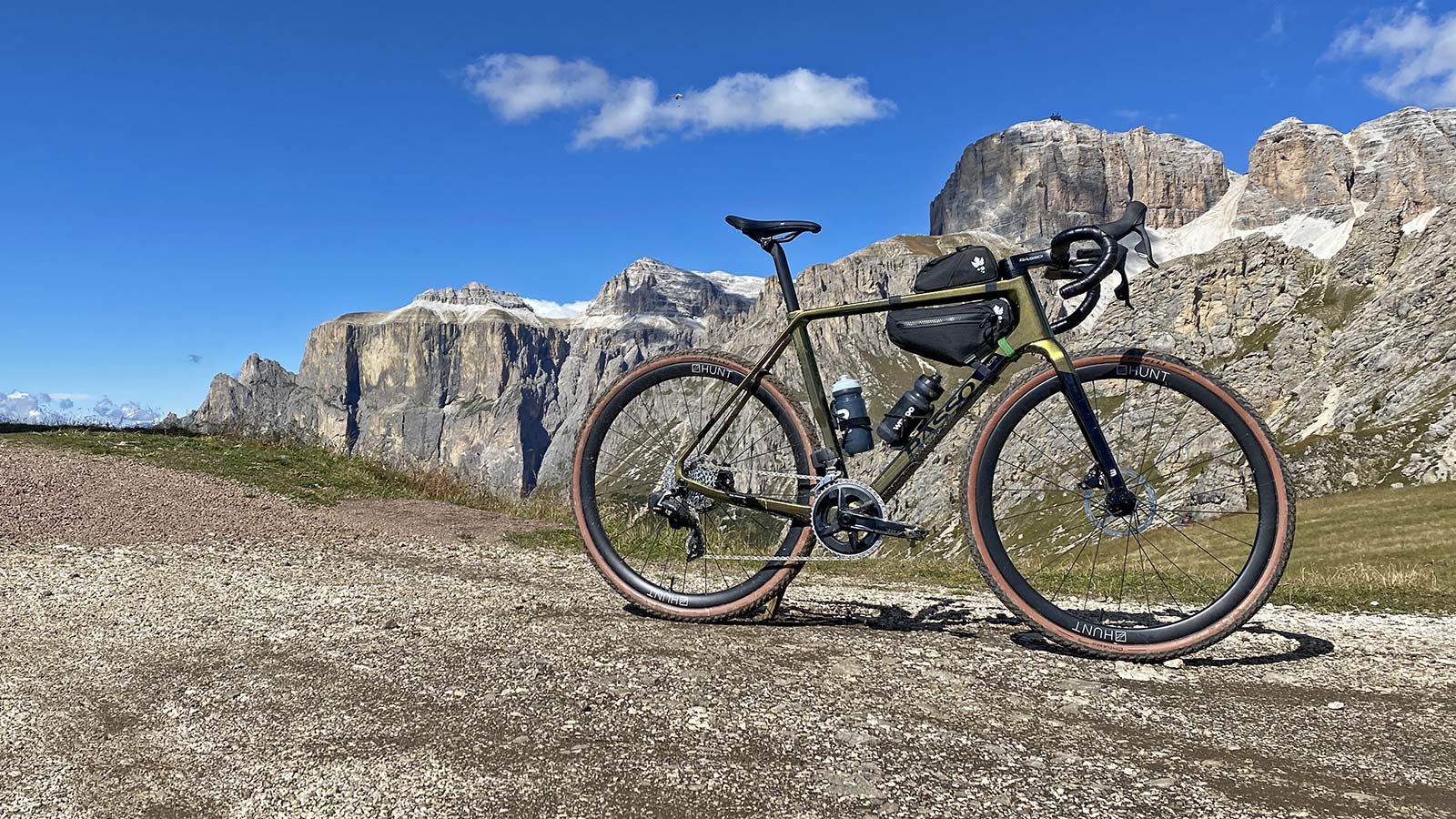 Equally important, the new carbon gravel bike is noticeably more comfortable as well. The original Palta felt stiff with precise handling, but my body was tired after riding it all day.

Even with bigger aero tube shapes, I never felt beat up after a long day on the Palta II. And I wasn’t even running the biggest tires you could fit in the new bike for even more comfort, grip & control. Yet, the same precise handling feeling remains, both on & off-road.

Having only ridden it for day trips, I’d now welcome the chance to take the new Palta II on more all-day adventure rides up into the big mountains. And with three sets of bottle mounts, the best toptube bag mount I’ve used, and a seatpost shape that actually stabilizes a saddlebag, why not load it up for some fast bikepacking trips, too! 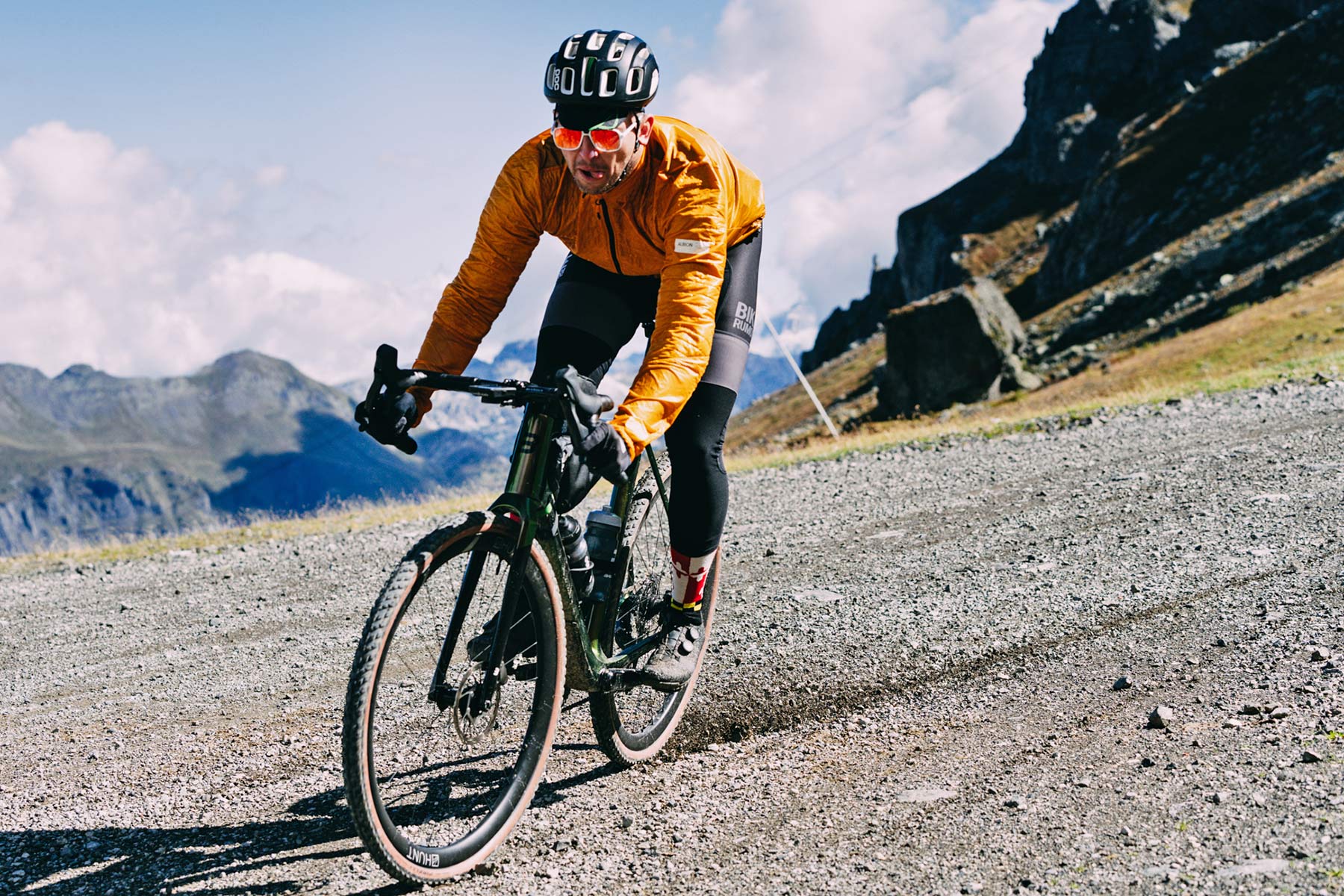 I’m still going to call the new Basso Palta II a gravel road bike, because even though its demeanor is much more stable and capable off-road, it doesn’t feel like Basso sacrificed any on-road speed.

It’s still not the perfect gravel bike for everyone and every type of riding. The Palta II’s geometry remains snappy, and riders searching for calm endurance geometry for mixed surface touring probably would be better suited with a more relaxed gravel bike.

But a rider looking to go fast over any road surface – asphalt, gravel, or dirt – will likely find plenty of speed in this new carbon gravel bike. And while it’s not exactly cheap, Basso makes the made-in-Italy Palta II available in a frameset ‘Build Kit’ option for 2938€ where literally all you need to add is a groupset. And if cost isn’t a major issue, there’s always the lighter Campagnolo Ekar build that makes this one of the most truly Italian gravel bikes that money can buy.

Seems like a great bike. How can we be sure that the frame was built (not just painted) in Italy? Not that c.o.o. is the biggest factor affecting quality.

I’ve seen that thru-axle with tools, just dont, or replace for normal ones. Who wants to adjust or repair things on their bike with their thru-axle?