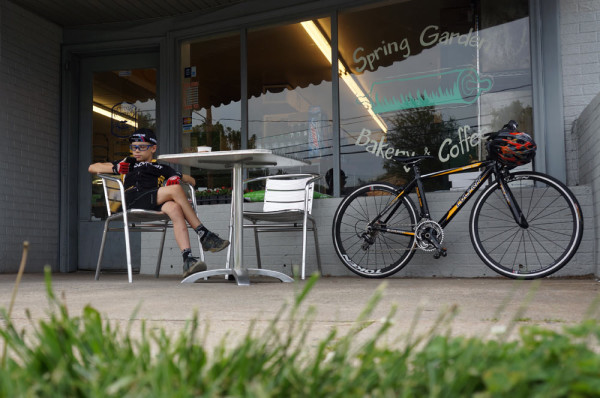 Culprit’s Junior series road bikes come in two sizes, a 20″ wheeled version and the 650C version tested by my son, Harrison. From the spec to the frame, they’re aimed at the performance crowd – as in, parents who are into cycling and understand why better parts make for a better experience.

Other than wheel and frame size, the two models are very similar: 7005 alloy tubing with aero shaping, Token wheels, Shimano 105 derailleurs/cassette/chain, TRP brakes and Microshift levers/shifters. They both use the same aero-shaped carbon seatpost with dual offset clamp positions. Cockpit is a Culprit branded alloy bar and stem and slim, traditional looking performance saddle, not some puffy perch like on most kid’s mountain bikes.

Where they differ is with crank length and forks. Both use custom CNC’d three-piece cranksets, with 140mm and 152mm arm lengths depending on model. Gearing is also adapted to the intended ages and their strength, with a 40/32 on the Junior One and 46/36 on the Junior Two. The smaller bike uses a 7005 alloy fork, but the larger Junior Two upgrades to a carbon fork with alloy steerer.

Solid spec for a kid’s bike, and when they’re all put together and you get your kid out on the road with you, that’s when it gets special… 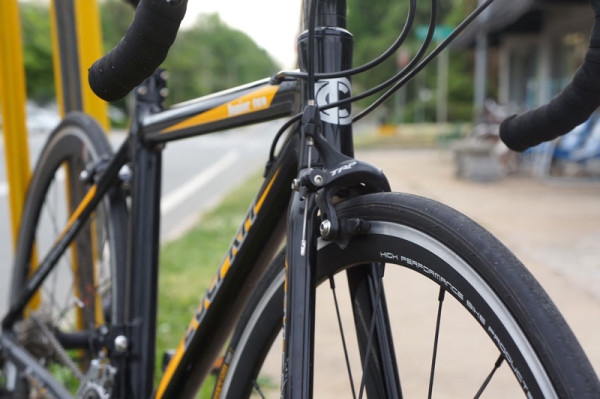 Up front, it looks every bit the high end racing bike. An integrated, hidden headset and smooth welds combine with internal cable routing and aero downtube, seat tube and chainstays to give it a very sleek look. 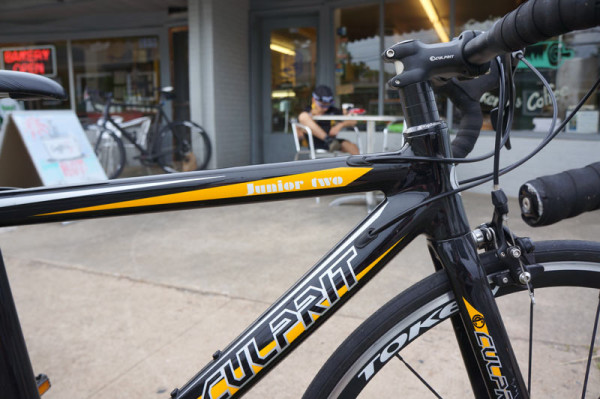 The steerer comes plenty long, letting you set the height to match your child’s growth. Handlebar drop is reasonably short, and I  measured bar width at 35.5cm center to center. I left the stem at the top of the steerer to keep Harrison in a more upright riding position – here’s why: 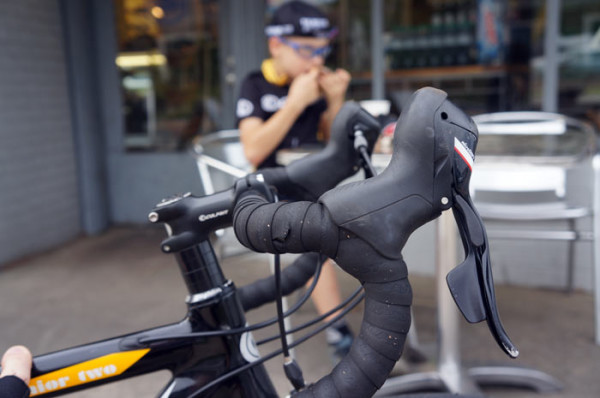 Microshift levers were spec’d because they’re a bit smaller than Shimano’s levers, better fitting smaller hands. Brake lever reach is fairly close to the bars, but he’s right between sizes on the frame’s recommended aging system (Culprit also provides minimum stand over heights on their website). When we first rode the bikes at DealerCamp last summer, the Junior One was borderline too small and would have almost immediately been outgrown. The Junior Two was borderline too big, but with an age rating of 10-13 years old, I knew he’d grow into it.

As such, his hands aren’t quite big enough to brake from the hoods, so he rides in the drops. Thus, I kept the handlebars as high as possible. As he grows, we’ll adjust accordingly. 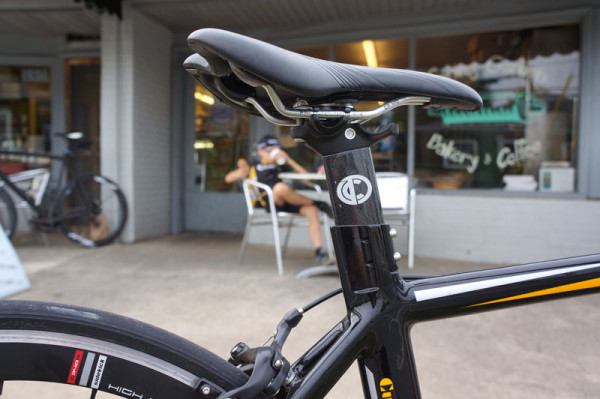 The seatpost is a long, aero-shaped carbon fiber post with an alloy top that provides two positions. 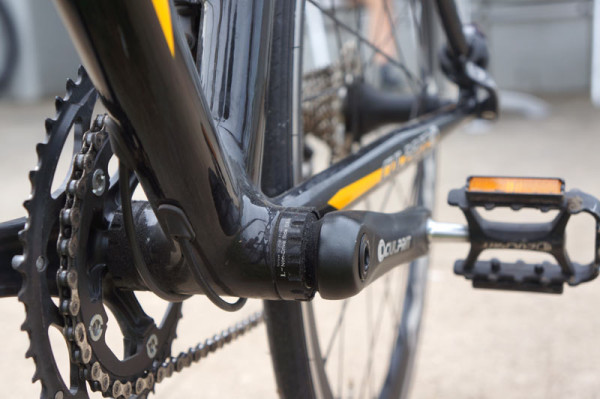 Shift cable routing exits just in front of the bottom bracket shell. An external bearing BB means easy replacement with a higher end unit if necessary. The Junior Two’s cranks use 110BCD chainrings, so even those can be easily replaced. Note how smooth the welds are, too…very pretty.

With a Shimano 105 setup and CNC’d chainrings, it’s spec’d better than many adult bikes costing hundreds more. And, actually, it’s built strong enough to be ridden by very short adults, too, so it’s unlikely a 65-80lb kid’s going to tear it up too bad. Unless they start jumping things. 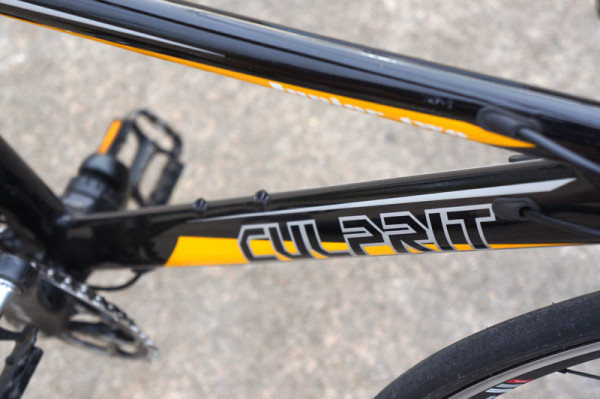 A PARENT’S REVIEW WITHOUT HAVING RIDDEN THE BIKE 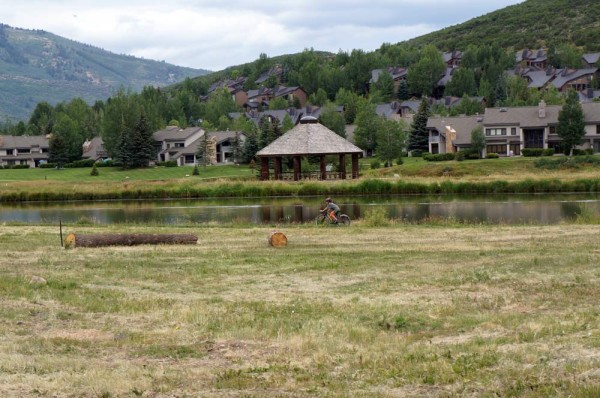 On the last day of DealerCamp 2013, Harrison (then 8-1/2 years old) found the Culprit around lunch time. As the exhibitors were boxing things up at the end of the day, he was still out riding. There was no way we were leaving Park City without that bike. So, Josh (Colp, founder of Culprit) and I made a deal, the bike was bought and a review promised. 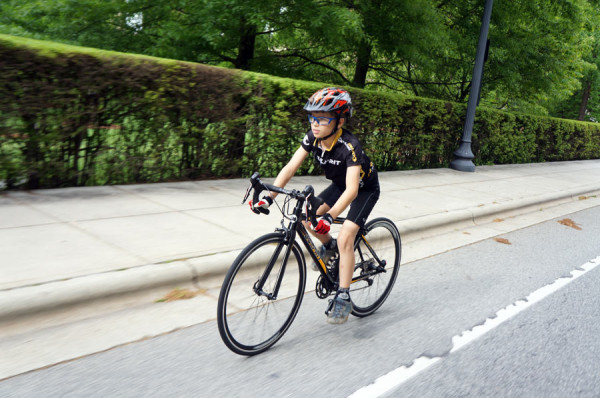 As a cyclist who happens to be a parent (or vice versa – priorities, right?), seeing my son excited about riding and wanting to go fast warms the heart. And as an aficionado of fine bikes and parts -not to mention finally learning the value of buying the good stuff once instead of the crappy stuff many times over- the Culprit has proven to be a good choice. Not only is the parts spec impressive for a kid’s bike, but the frame is solid and will deliver years of use thanks to smart layout and design. 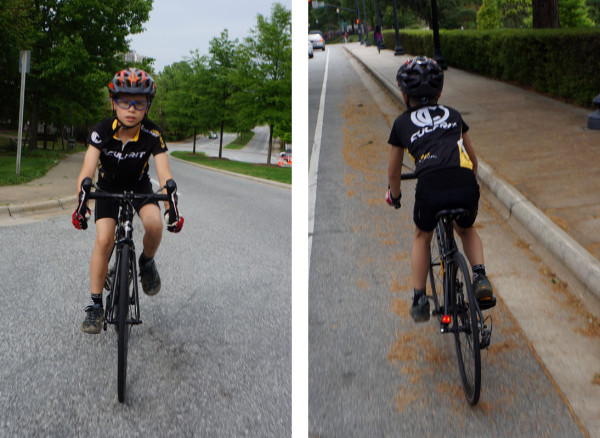 While MicroShift wouldn’t be my choice for my own bikes, it makes sense here and it works perfectly fine. As does everything else on the bike. Honestly, I haven’t spent more than 20 minutes tuning the bike or inflating tires in the 10 months we’ve had it.

The Junior Two retails for $1,100, which is about $300 to $400 more than other bike-shop-quality kids road bikes we’ve seen lately. For that, I’d say you get better wheels, an aero frame and solid spec. You also get the peace of mind knowing that your kid won’t outgrow it in two years, and that it’s durable enough to outlast their entry into the tweens. 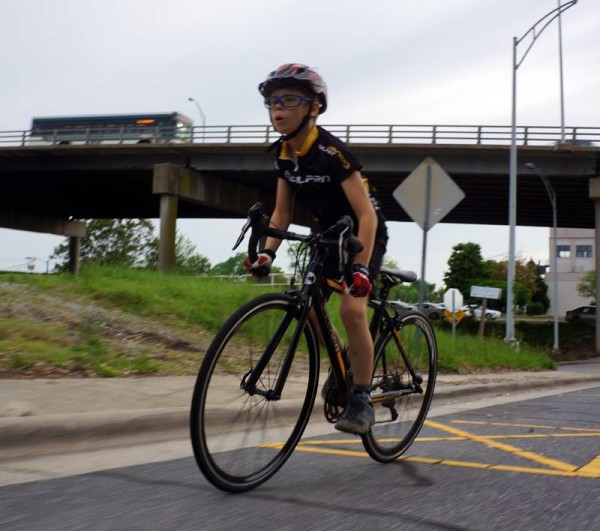 Hi, my name is Harrison I am 9 and I’m going to tell you about my Culprit-junior two. It can go really fast down hill. I like to go on short rides with my dad threw the neighborhood. Also I sometimes ride with friends around the neighborhood. One of my favorite places to go is to spring garden bakery a cafe not to far away from our house. The only thing I don’t really like about it is that I wish you could lower the seat a little more. When I hit rough spots it handles pretty well like its not to bumpy and it’s not hard to steer or any thing. It’s my first road bike and so far for my first road bike it’s my favorite, so buy your kid a Culprit-junior two! 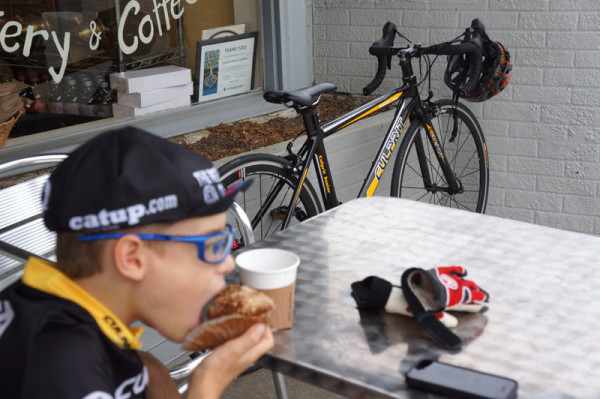 You and your dad wrote a great review. I don’t have kids, but I think that bike looks pretty great. I was thinking about how you wish the seat could go lower, tell your dad it looks like that saddle has pretty high rails, maybe he has another saddle that’s lower profile, that will get your butt down a little closer to the pedals?

1) Why bother with the 30mm rims on a kids bike? Yes, it looks cool, but how much aero benefit or need for strength does a kid need versus having lighter rims?

2) I’d be interested to see a more detailed review on the microshift levers.

my 6 yr old is averaging 32kph in his races and on a recent tt hit 42kph,,,,, so thats why bother with aero rims, that incedently are still pretty light!

Haha that was awesome. Good job kid. Hope you have lots of fun and safe rides.

Gervais Rioux at Argon 18 bikes in Canada has been offering some very well done junior road bikes for years. It seems to be a category that is quite common in the European market, but not so much in North America. I had one of his Xenon 650C bikes for my youngest son. It was quite well made, good spec, and the only complaint was that he outgrew it faster than I thought.

stack – aero wheels make probably the biggest difference in the “ease of speed” on a bike and reducing drag, at least from my experience, even at speeds around 13-15mph. So, anything that can reduce drag should help the kids go faster with less effort means they’ll be able to hang on longer rides. I agree lighter wheels are always better, but once you’re up to speed and cruising on flatter ground (which is mostly what he does), I’d favor aero for sustained performance over quicker-to-spool-up light weight box section rims.

As for the MicroShift levers, all I can say is they shift fine for him (and me in the workstand) and it’s minimal lever throw to shift, so it’s easy enough for smaller hands to use. They use the outboard cable runs like the older Shimano stuff, so cable drag is minimized, too, compared to the tighter routing required for some internally run stuff (as in, from the shifter straight back along the handlebar). If you’re interested in them for yourself, I’d say go with 105 shifters for adults. They have spacers that can bring the brake lever in closer to the bar for smaller hands, but the action is a bit smoother.

If you’re spending serious money on shifters for small hands SRAM is actually a better choice than Shimano. My wife has very small hands, as in she buys kid sized gloves and our 11 year daughter has bigger hands. Her experience is that the Shimano spacer wedges took away too much brake lever travel and a stock SRAM Rival or Apex lever was the perfect fit. Admittedly this was on her CX bike with Mini-V brakes which needed a bit more cable pull. Her road bike is still running old style 105 with side pull brakes but she still wants to switch that to SRAM as soon as we can buy the parts.

I really like that it has a pretty short head tube but a long steerer. I deal with more than my fair share of junior racers at my job and at this age they are in damn near every week for some sort of fit adjustment, so having a bunch of options is awesome.

Looking at all of the Culprit’s junior offerings though, I would love some of them to come with junior gearing, because while that 52t chainring is getting easier to find, that 14-25 cassette isn’t.

Slow Joe – The pull of the brakes can be adjusted accordingly after the reach has been figured out. All brakes can be adjusted this way regardless of brand. Reach can also be affected by the levers placement themselves. I have shimmed my levers to get them closer and my brake pull is the same as it was before; after adjustments.

Good job Harrison! As a shorty myself, it’s cool to see little rides for short people.

How tall was your son when you bought the 650c bike?

I’m considering this bike for my wife. She’s about 56 and a half inches tall. What was your son’s inseam when he first rode the 650c bike?

Roberto, It’s been a few years, so we’re estimating his inseam was between 24 and 26 inches. Sorry we couldn’t be more precise!

Thanks for the detailed review. Do you know what size BB can be used to upgrade?