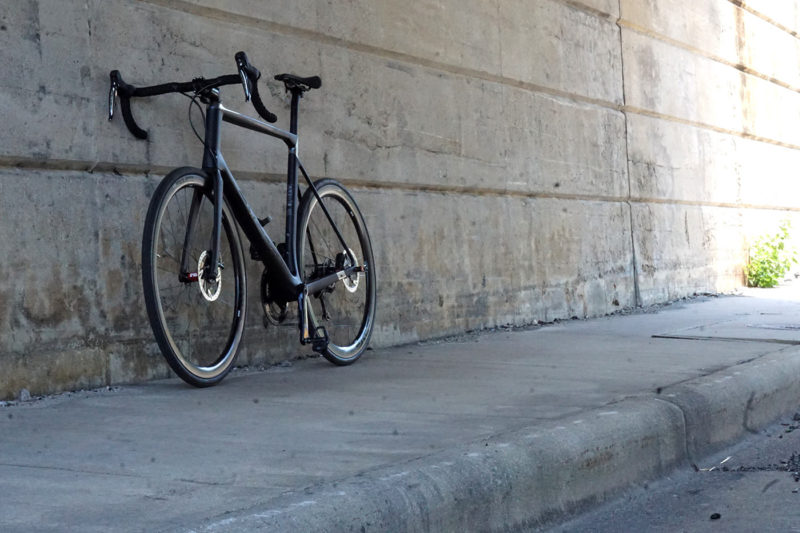 Exept is an upstart based in Finale Ligure, a coastal outdoor sports mecca on the western side of Italy. With steep climbs heading straight up from the sea, rolling terrain above it, and gorgeously twisty cliffside roads giving you incredible vistas no matter where you are, it’s a perfect spot to call home. And the perfect spot to create a road bike that can do it all. Combine that with their unique custom carbon monocoque construction methods and complete body measurement fitting and data system, and you have the potential for world-class carbon fiber road bikes.

Such was the promise when I toured their factory in February and saw first hand the fruits of that labor. During their launch at Eurobike 2018, they measured me. In the following months, we conversed about my riding style, which bikes I liked and what I liked about them, and more. All of the data was plugged into their calculator and the stack and reach were plotted, carbon was cut, and a bike was formed that would be just for me. Here’s how it turned out, and how it’s performed for the past seven months… 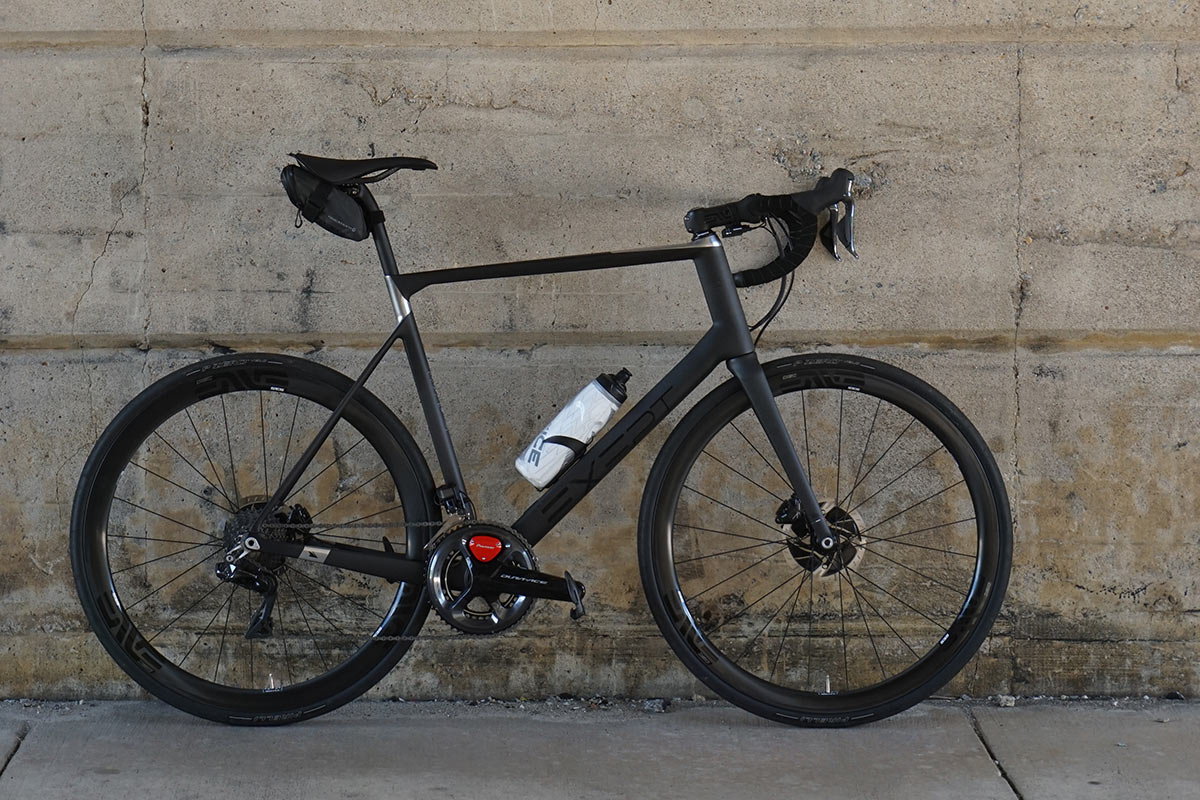 Exept’s first offering is the All Road, a versatile frame that’s available in two formats – standard (tested and shown here), and integrated. The latter uses a specific handlebar and stem combo to complete hide all cables, hoses and wires from tip to tail. I wanted the ability to test different components on this bike, so I opted for the “standard” model, which runs the cables, wires and hoses into the front of the frame, not to be seen again. 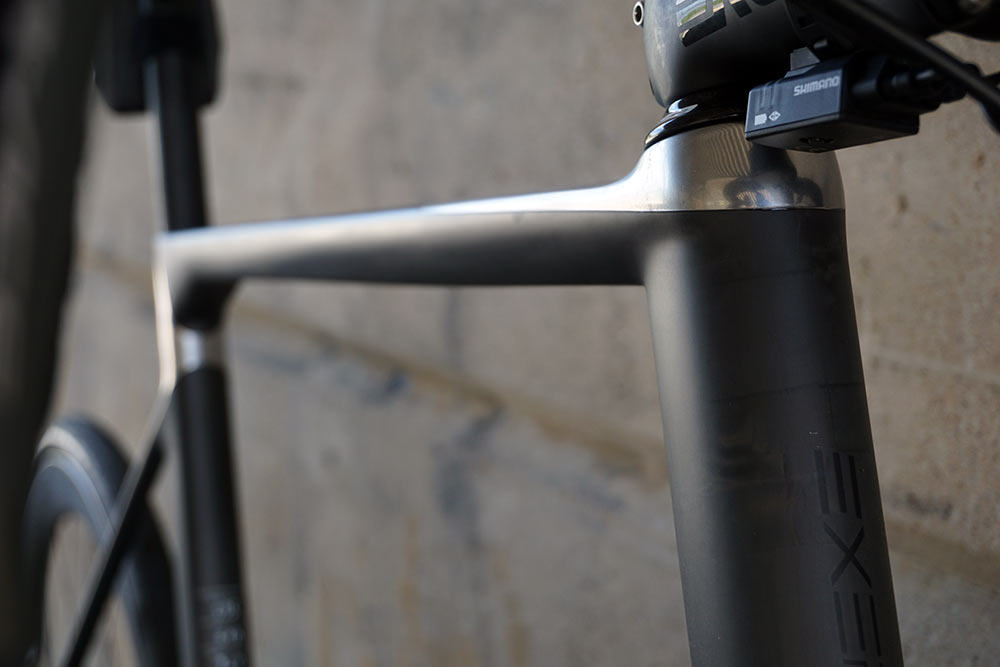 The angle of the downtube and head tube is customizeable, which is uncommon for true monocoque designs, and this is part of their secret sauce. You can see the slight change in angle behind the head tube where my downtube takes on its proper lines to create my bike. 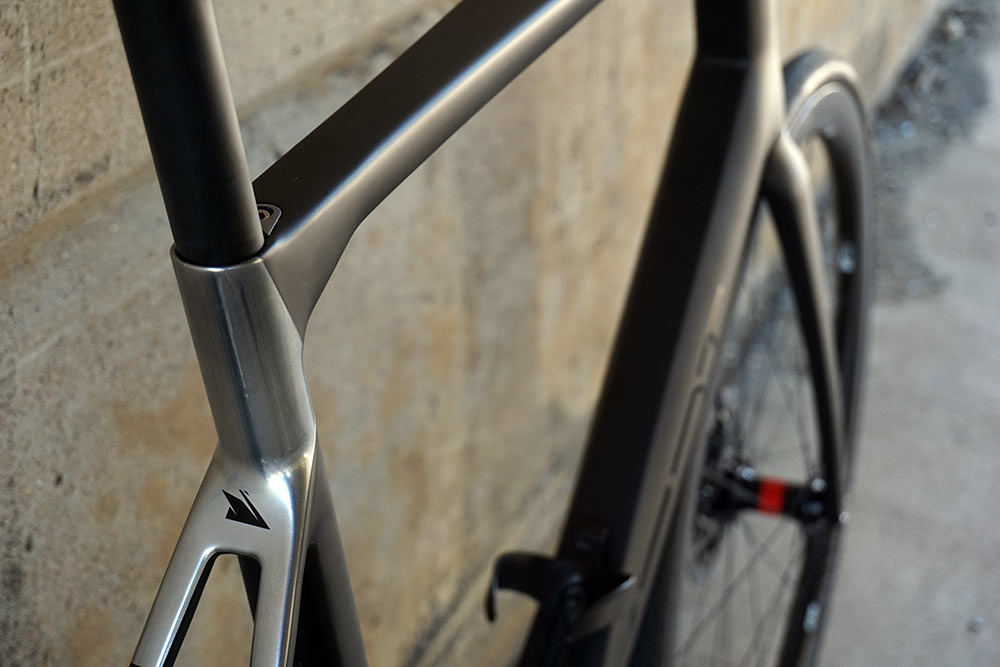 The top tube is thin, and not too wide, which is good for knee clearance. It tapers rearward to their integrated seatpost binder. The insert is fairly tall, creating a larger contact surface with the post to avoid sharp pressure points. I ended up going a bit above recommended torque settings to keep the post from sliding down. 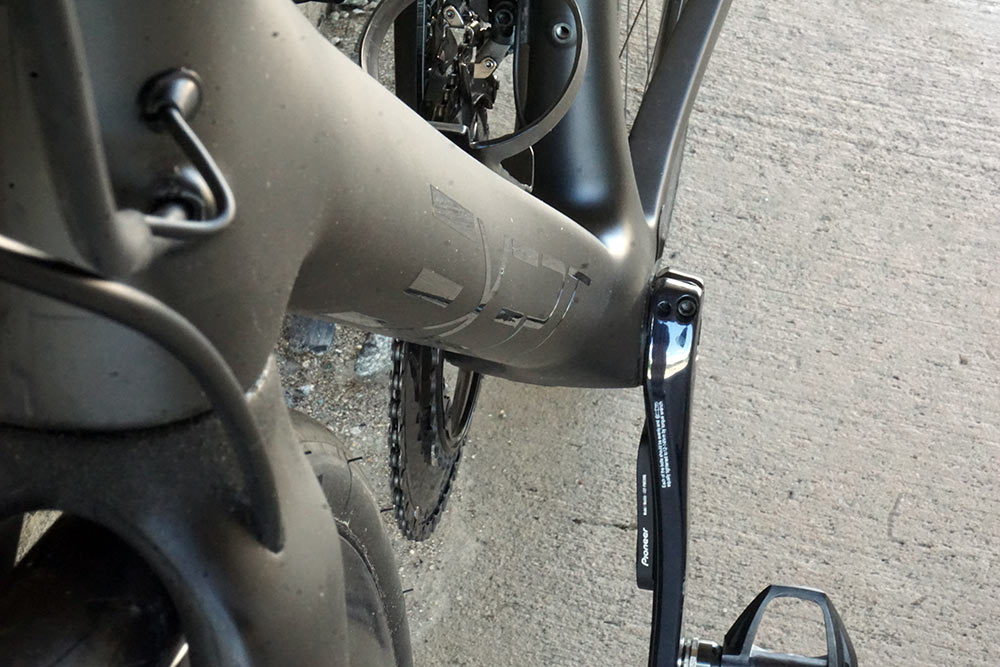 The downtube’s shape has a rounded frontal profile that wraps mostly around at the top half, then gets a flatter top section as it nears the BB. This provides a beautiful transition into a very wide PFBB86 bottom bracket shell. 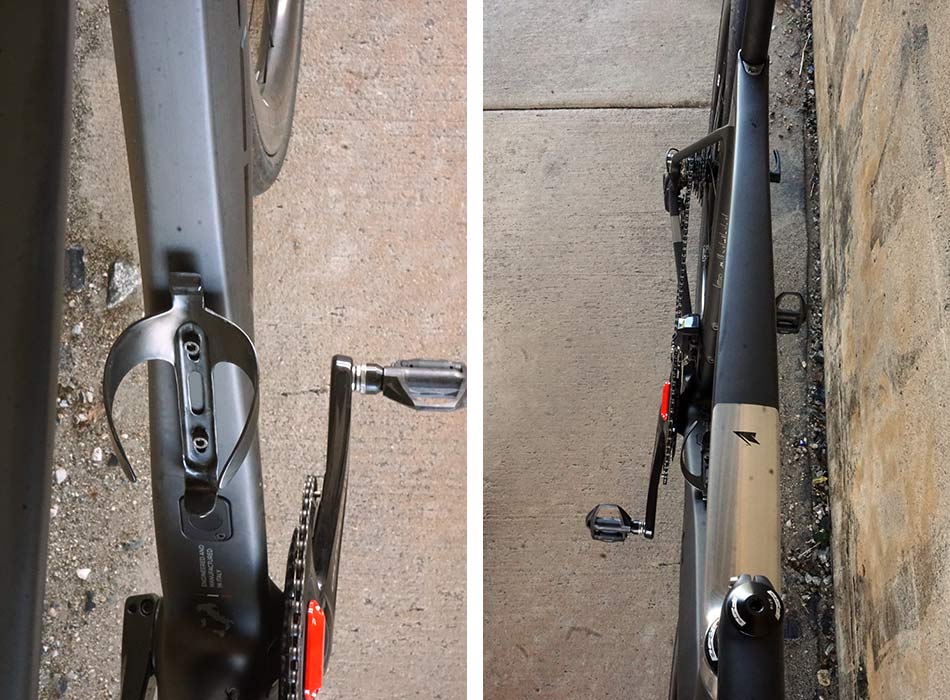 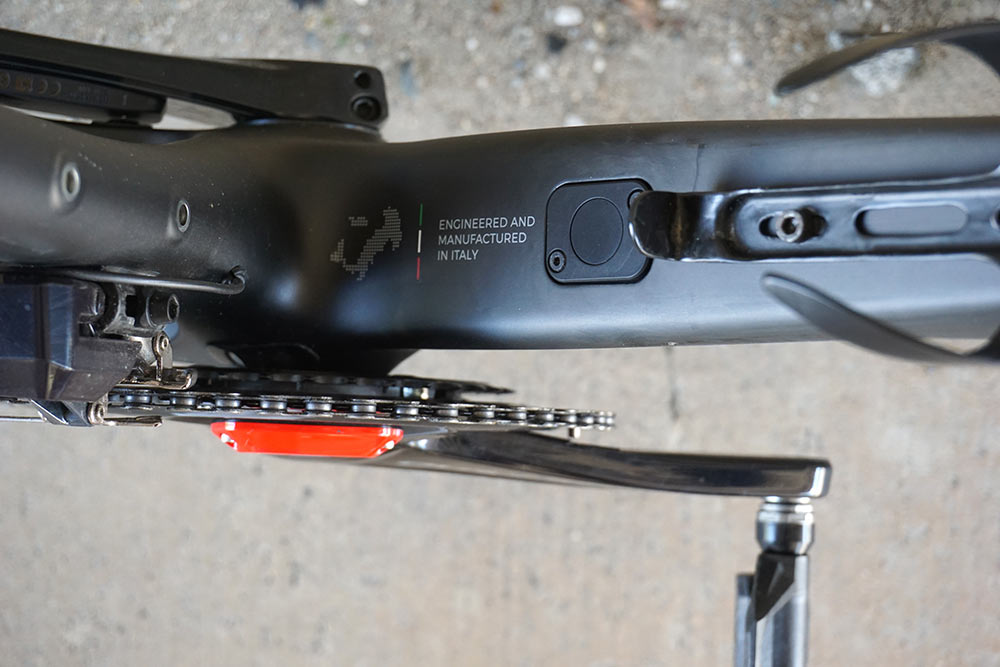 If you opt for the integrated build, your Di2 junction box will be hidden in the downtube. Mine’s strapped to the stem, but the option is there. 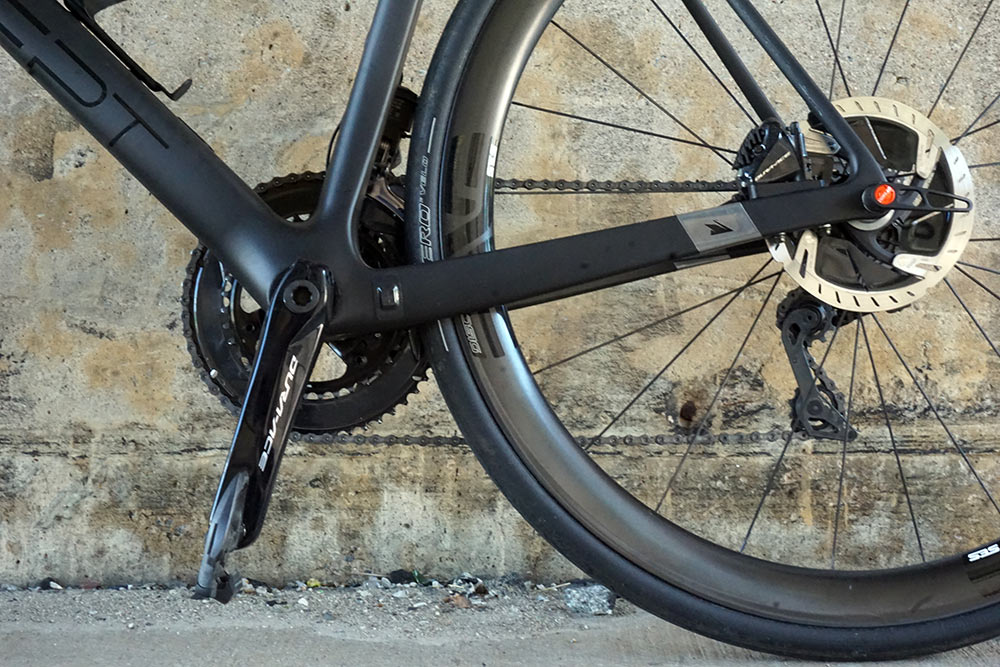 The lower section is plenty stiff without resorting to bulbous shapes and oversized chainstays. The seatstays are thinner, which helps with ride quality…and aesthetics. 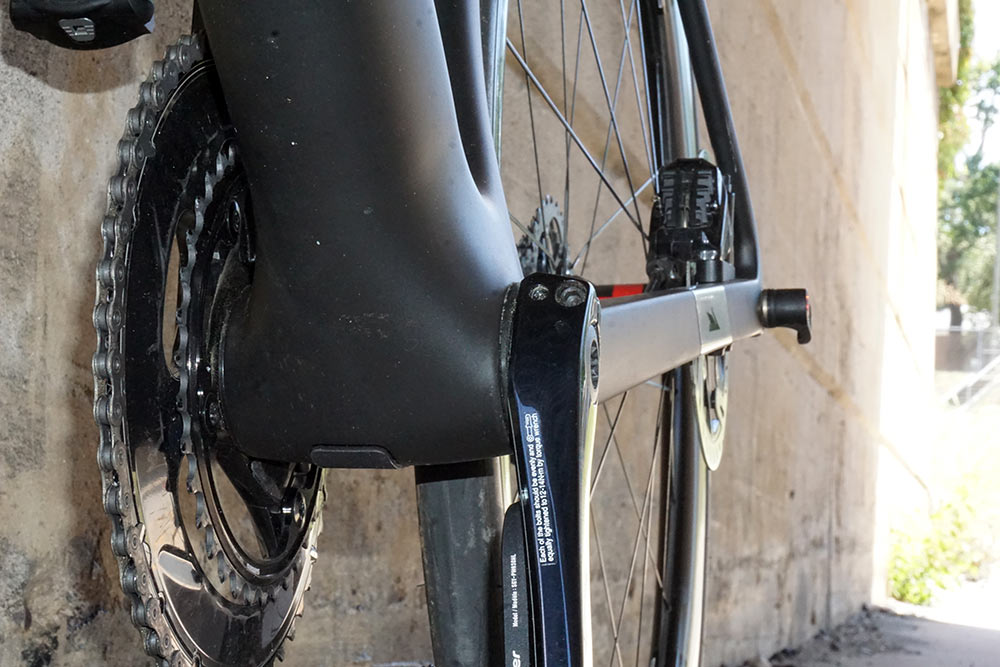 A small cable/hose/wire access port on the bottom eases maintenance…but it is small. 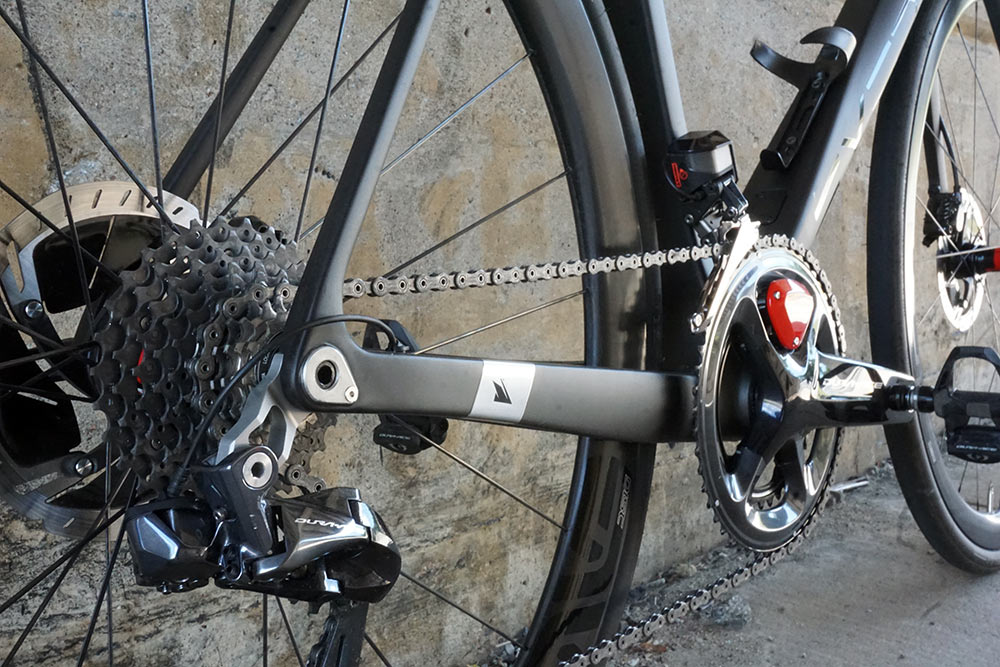 Upon receipt of the bike, the hole for the small screw holding the derailleur hanger in place had become slightly stripped, such that there was a bit of play even with the wheel and thru axle firmly installed. Exept shipped a replacement hanger and screw and I’ve had no problems since. If you’re shipping the bike without the wheel in it, I’d recommend removing the hanger just to be safe.

Tire clearance is rated at 28mm, and that’s what they shipped it with. I measured the narrowest point of the chainstays (at the tire’s intersection) at about 33mm, so there’s just enough room for wheel flex, but I wouldn’t try to put anything bigger than 700×28 in there.

Fortunately, even with those wide chainstays, the Pioneer Power Meter will fit. That, and swapping the saddle, are the only changes I’ve made to the bike so far. Next up is converting to tubeless, but even with tubes and running around 85-90psi, the bike is comfortable…but I suspect (know, really) that dropping the tubes and getting to 80-85psi will get it where I want it. 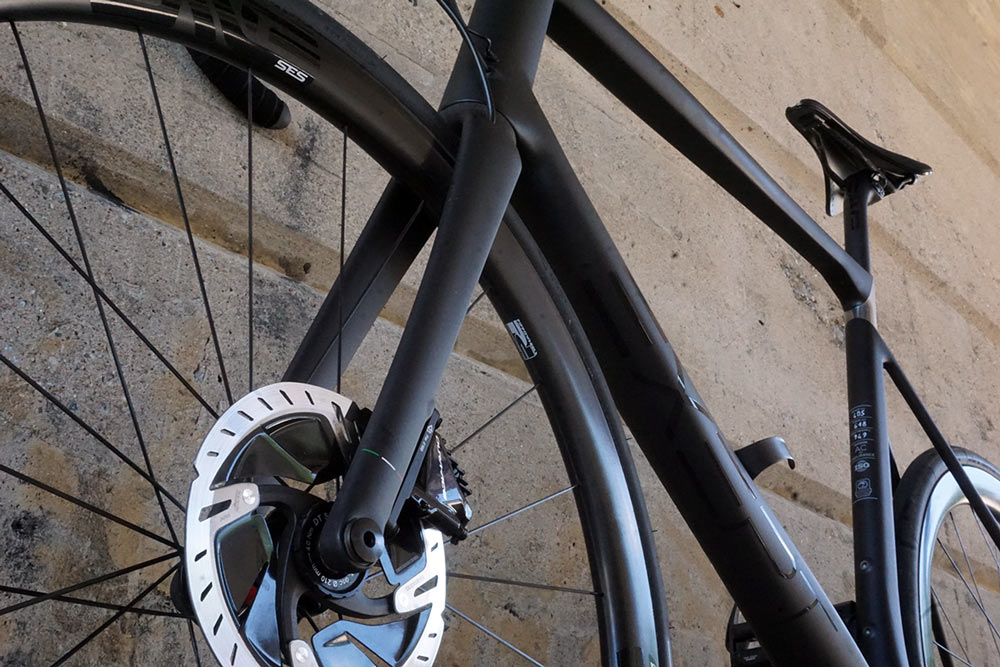 After seeing their process first hand, examining my own bike thoroughly, and riding it over all sorts of paved surfaces, I’d say the combined years of talent that started Exept have paid off with a well made bike that can be customized based on a ton of data points. 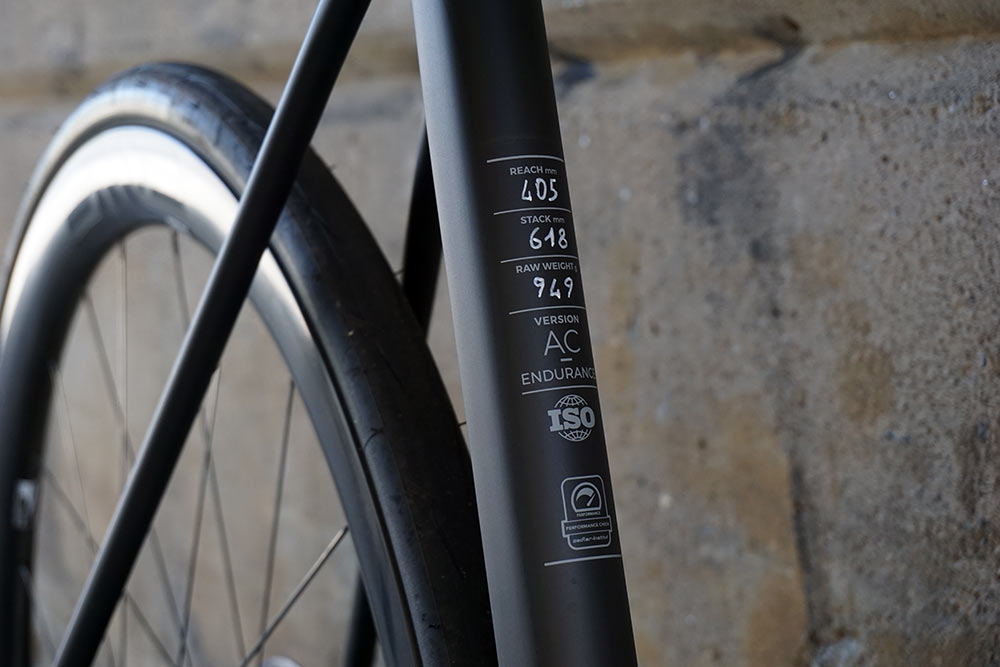 Exept puts every frame’s reach, stack and raw weight on the frame. Unlike most handmade builders, they’ve actually tested their frames to ISO standards and passed. That’s not a dig at the many very talented builders we know, but it’s a point of differentiation that few other custom bike builders spend the time and money to do.

My baseline for this bike, in addition to the fit, was the Cannondale Synapse. Above is the geometry chart comparison, showing how Exept’s fit calculator put me just above a size 58 (left chart), and off the grid for stack and reach. While these numbers are totally out of the range of adjustments possible with seatpost and stem selection, it illustrates that even for brands that fit most people just fine (myself included), going custom allows you to nail it perfectly. You can check out the full comparison and sizing details in my factory tour story. And Exept answered your questions about carbon fiber bicycle construction in AASQ #52 if you’d like to learn more about their process and carbon frame construction. 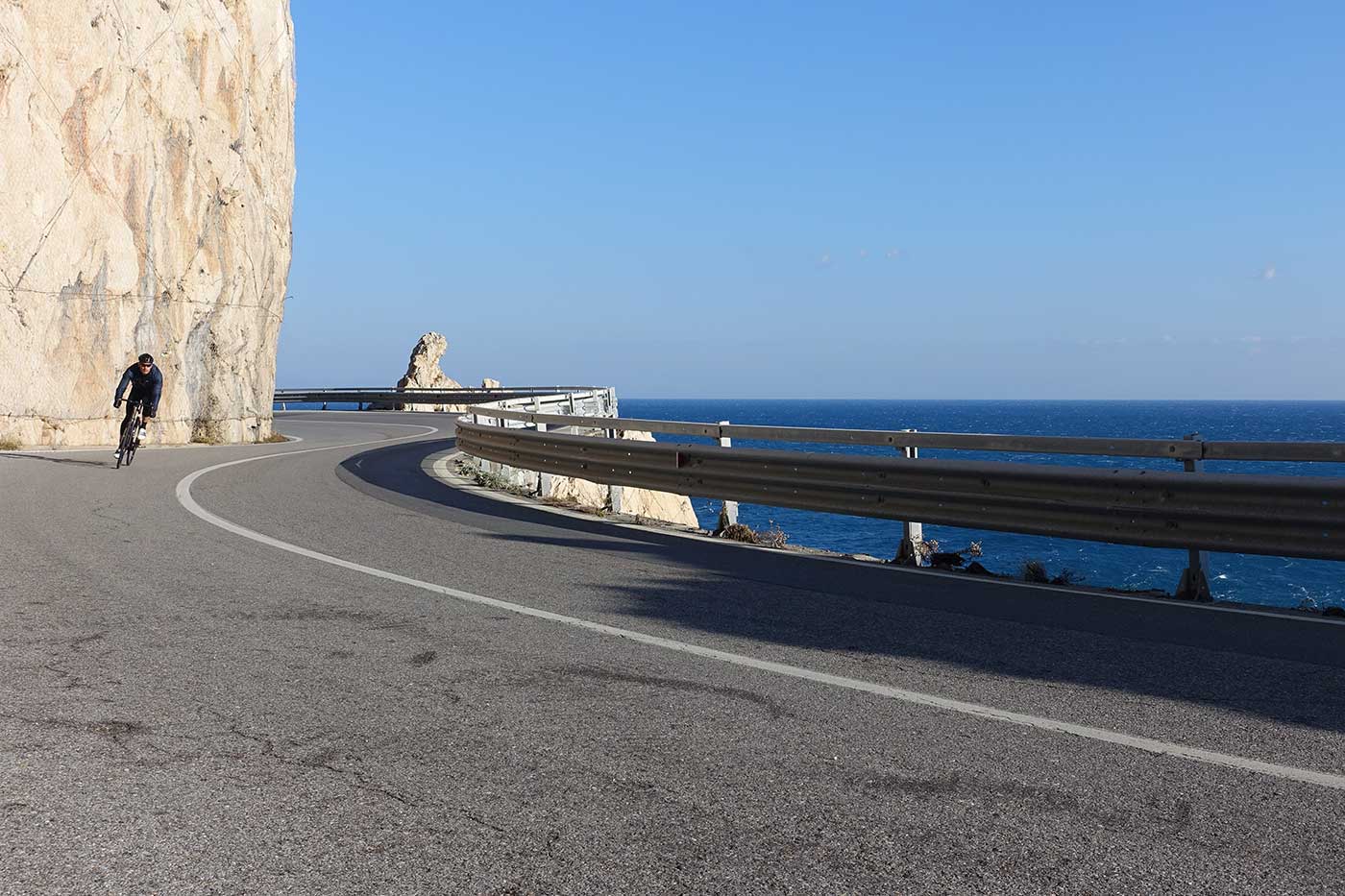 My first impression upon picking the bike up in Italy was simple: This bike was made for me. It was apparent the first time I got on the bike and started pedaling. Which tells me that their database and algorithms work. In itself, that’s no small feat, because there are countless variables it must consider.

Did it match the Synapse’s handling exactly? No. But that’s OK. If anything, it has a bit more personality. It also leans more toward speedy handling, without getting anywhere near nervous crit bike territory. Meaning, it’s a great all-rounder, capable of 3-4 hour rides, fast group rides, and everything in between. 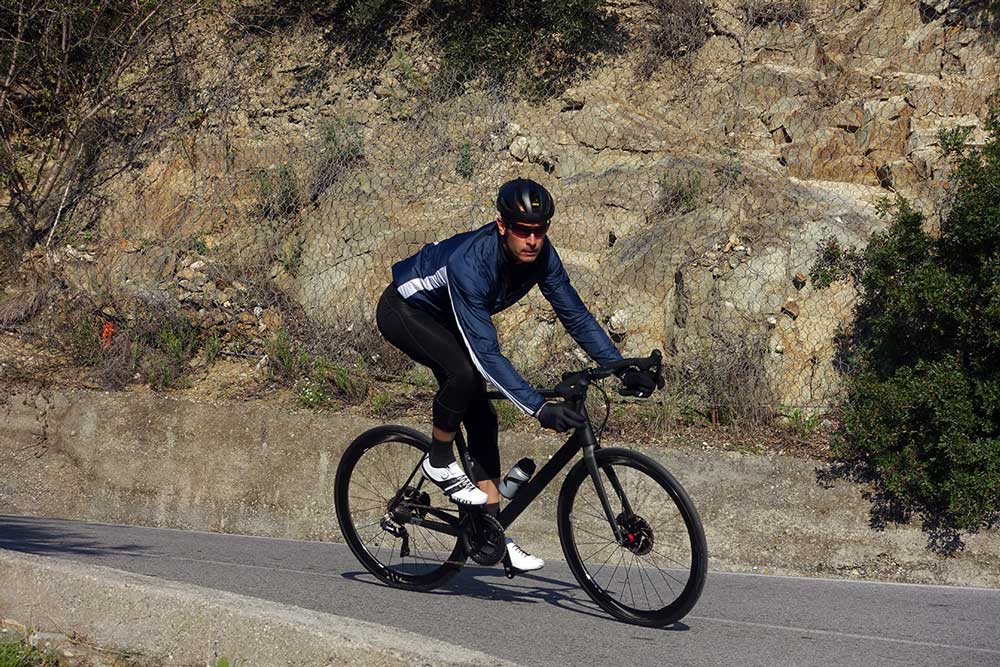 My Exept All Road strikes the right balance between straight line stability and being able to avoid kamikaze squirrels, all without upsetting the balance required for confident riding. By which I mean this: I can zone out and focus on the scenery if I want, but it’ll respond to input as quick as needed to avoid danger.

I have only three quibbles with the bike. First, there is an occasional creak from the stealth seatpost clamp system. Tightening it helps, but I’m hesitant to over tighten it and damage the frame. It’s not constant, and tends to happen more when I’m shifting my weight than over bumps, so it’s not too big an annoyance.

Second, on bigger impacts (like a pothole or rumble strip-type pavement irregularities), the rear brake hose can rattle inside the downtube. Pulling it up through the front port to keep it taut helps mute that, but eventually it slackens out a bit. This, too, is not constant, but some sort of internal foam sleeve would be a nice idea during initial assembly.

Third, the glossy paint on the top tube can reflect quite brightly in direct overhead sun. It looks awesome in most cases, but worth noting that in the right conditions, it can be distractingly bright. 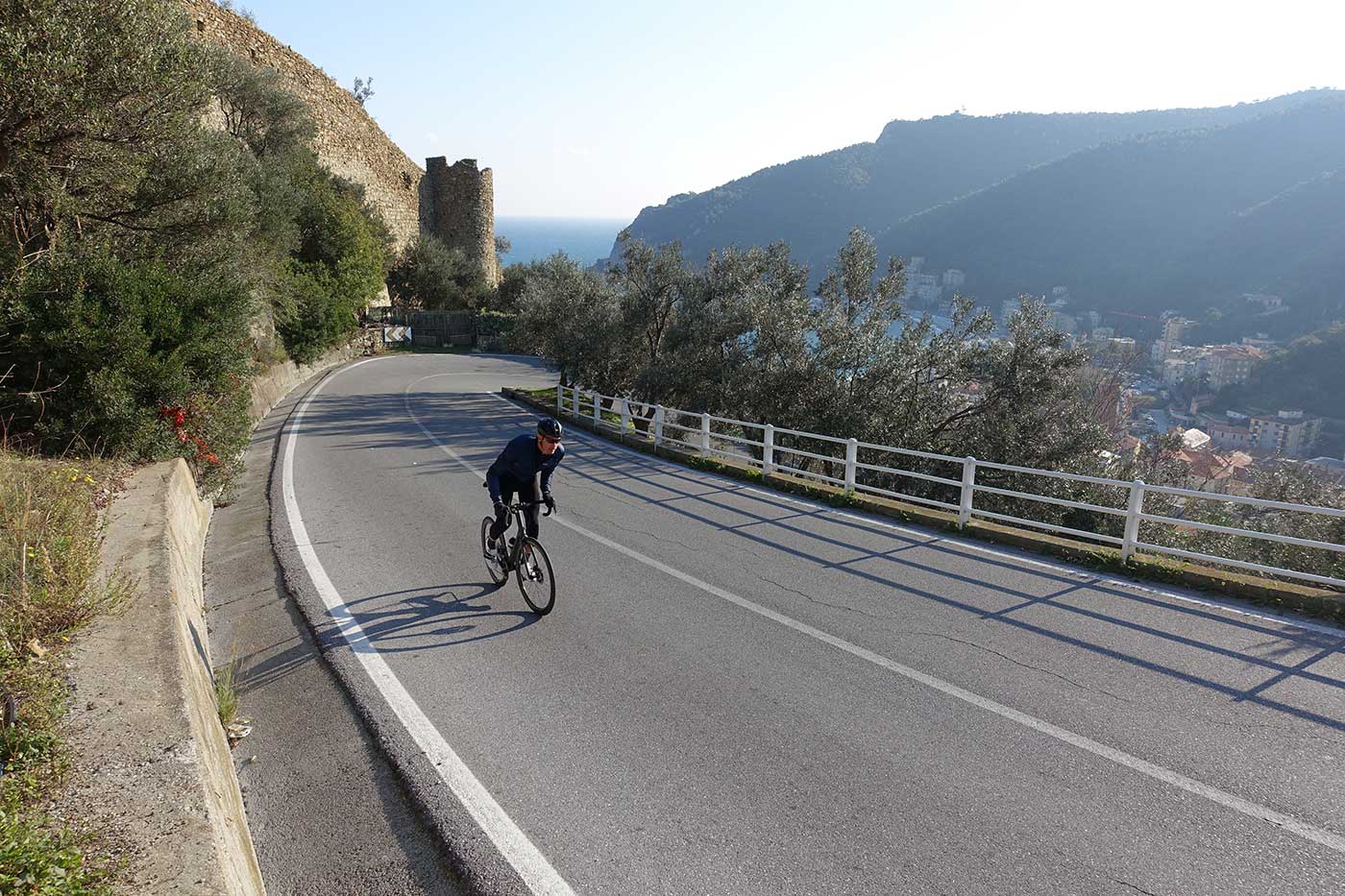 Climbing is solid, whether seated or standing, as are sprints. And cornering is stable and predictable, too. Point into a corner and shoot out of it, the bike goes where I want.

Base price for the Exept All Road with full custom geometry and your choice of accent colors is $5,700. As shown, my bike would carry a retail price around $15,000, but they have complete builds for under $10k with electronic shifting and carbon wheels.

Beautiful build bike.different from my Dutch city bike i ride from Amsterdam to Marseille in France 1971