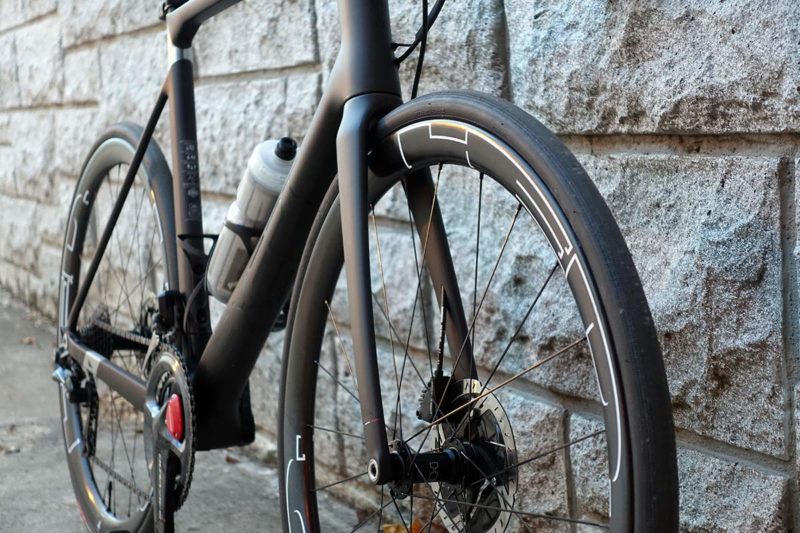 When the new HED Vanquish 6 wheels came out, they were the first full carbon clincher rim from the U.S. brand. Until then, they’d used an alloy rim bed and brake track for improved heat management and durability. But with the mass movement to disc brakes, this opened up opportunities to do something different. Since then, they’ve added two more depths and a more affordable GP version. Here, we’re testing the higher end Vanquish 4… 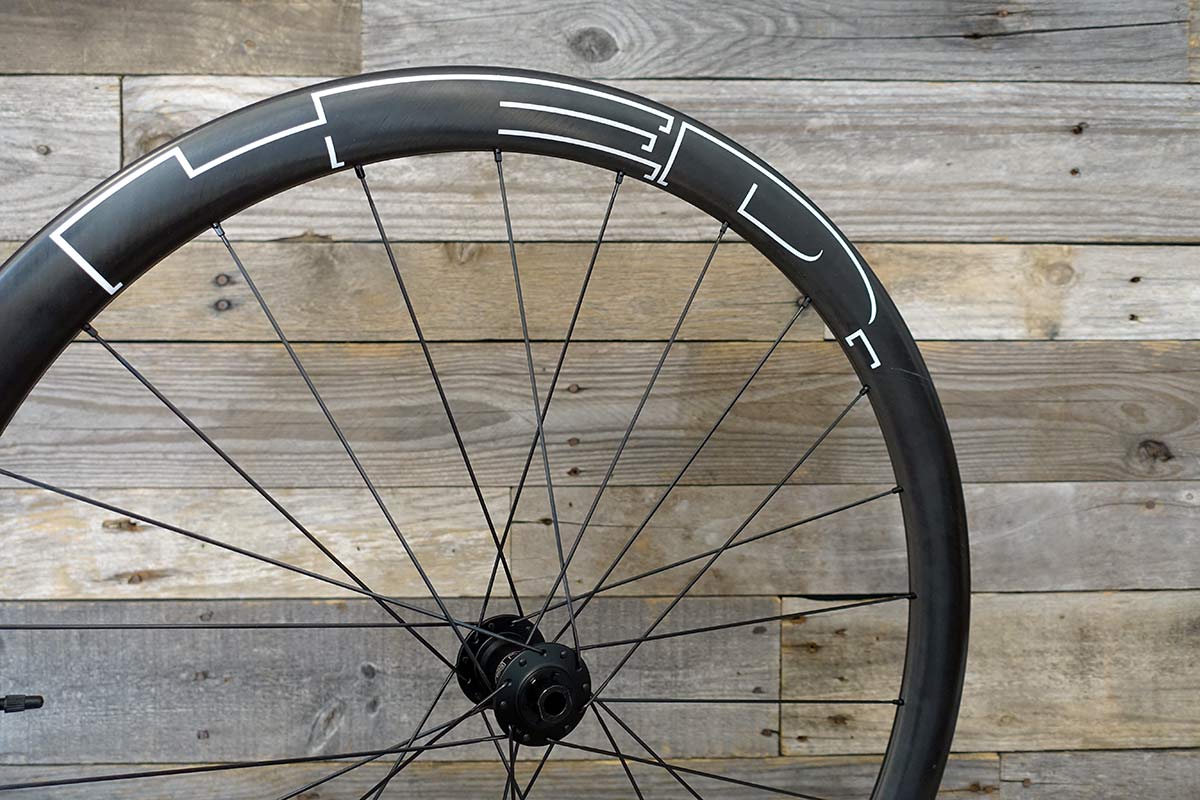 Most of HED’s chatter about the Vanquish tubeless carbon clinchers was about the rims, which is understandable since they are their first full carbon offering. But as we dug into it, there’s a lot more to the story that makes these a killer wheelset. 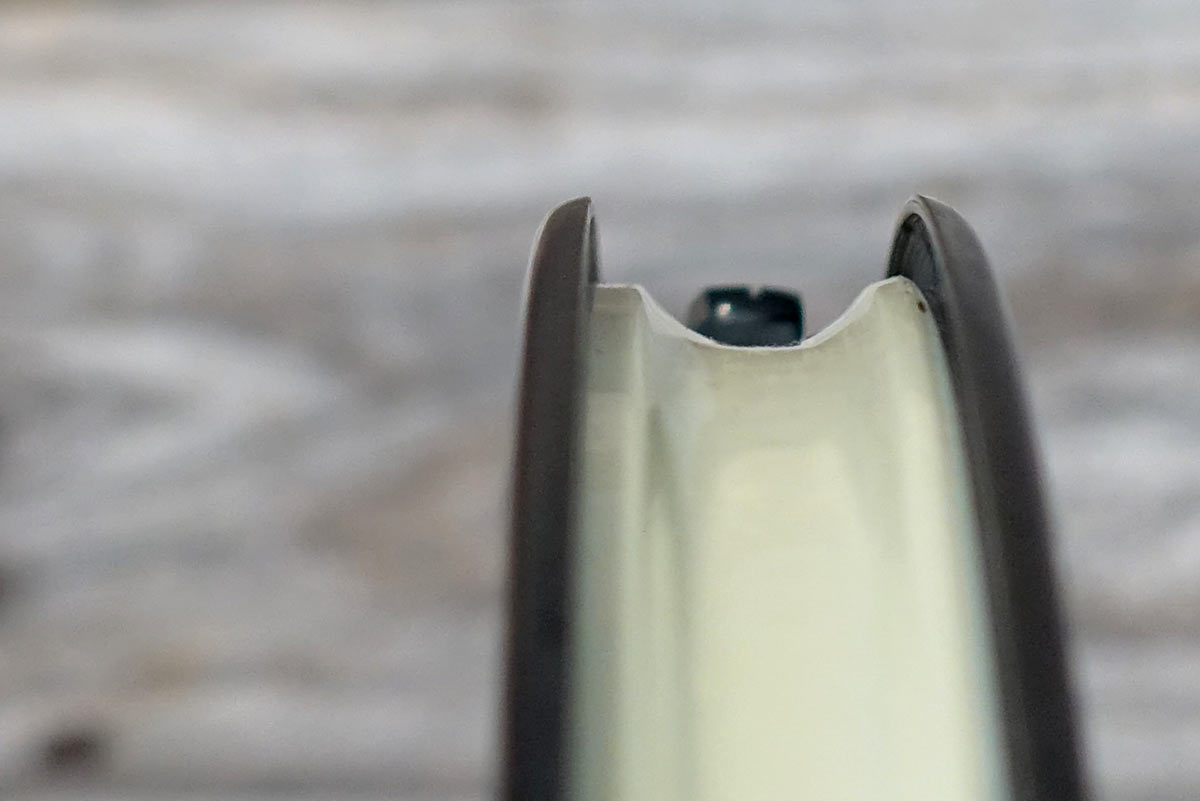 But as a quick recap, HED says the rim’s profile in all three depths (4, 6 and 8) are the most well-rounded aero design because they’re (for all practical purposes) equally aero with any normal sized road bike tire up to a 700×28. Indeed, that’s what we’re testing it with, the new Specialized RapidAir Turbo tires.

The rims measured 21.5mm internal (21mm claimed), 30mm external, and 41mm tall with our calipers. They come pre-taped for tubeless with custom valve stems preinstalled. I used the Specialized RapidAir sealant and both seated with the Topeak booster floor pump at full blast, plus a little extra pumping and wiggling to get the sealant into place. Since then, they’ve held air remarkably well.

What about the hubs? 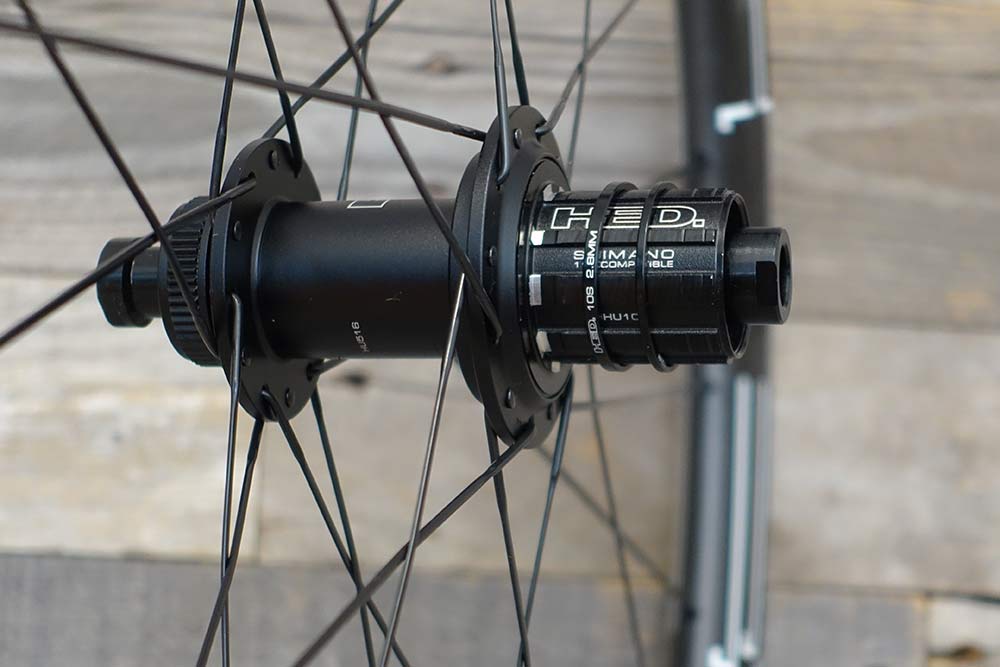 Here’s where HED should put a little more marketing effort, because the hubs are really good, too.

They say their testing shows they have the lowest drag of any of major, high-end hub brands they tested against. How? They use oversized stainless EZO bearings with stainless races. Larger ball diameters mean they roll smoother and with less friction. As such, HED doesn’t put ceramic bearings in these (or any of their wheels). 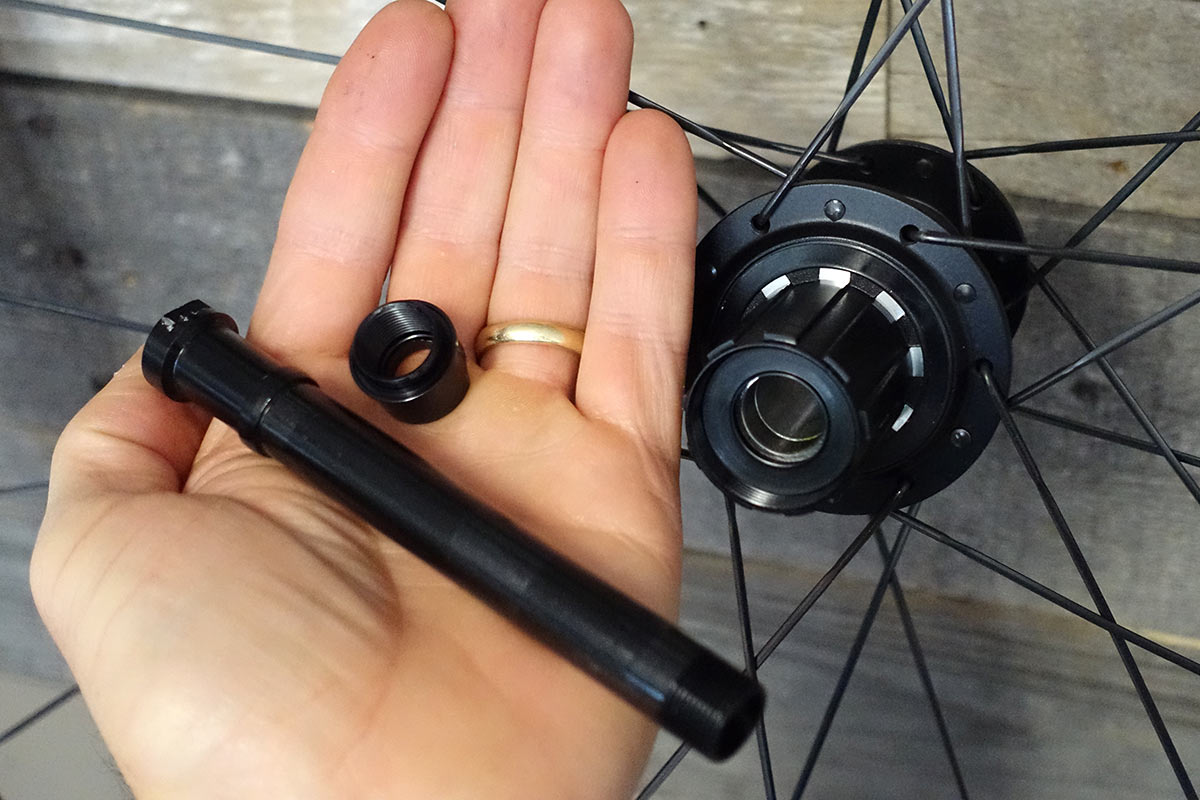 They also use a solid axle, which means it’s the axle itself sitting in your dropouts, not press-on end caps. That eliminates two spots where flex can enter the system. The design also means no need for pre-load, so they use flat-race bearings instead of angular contact bearings (which allow for a small amount of lateral movement). Once you thread the axle together, it pulls everything tight, with no side to side play, but also no friction. 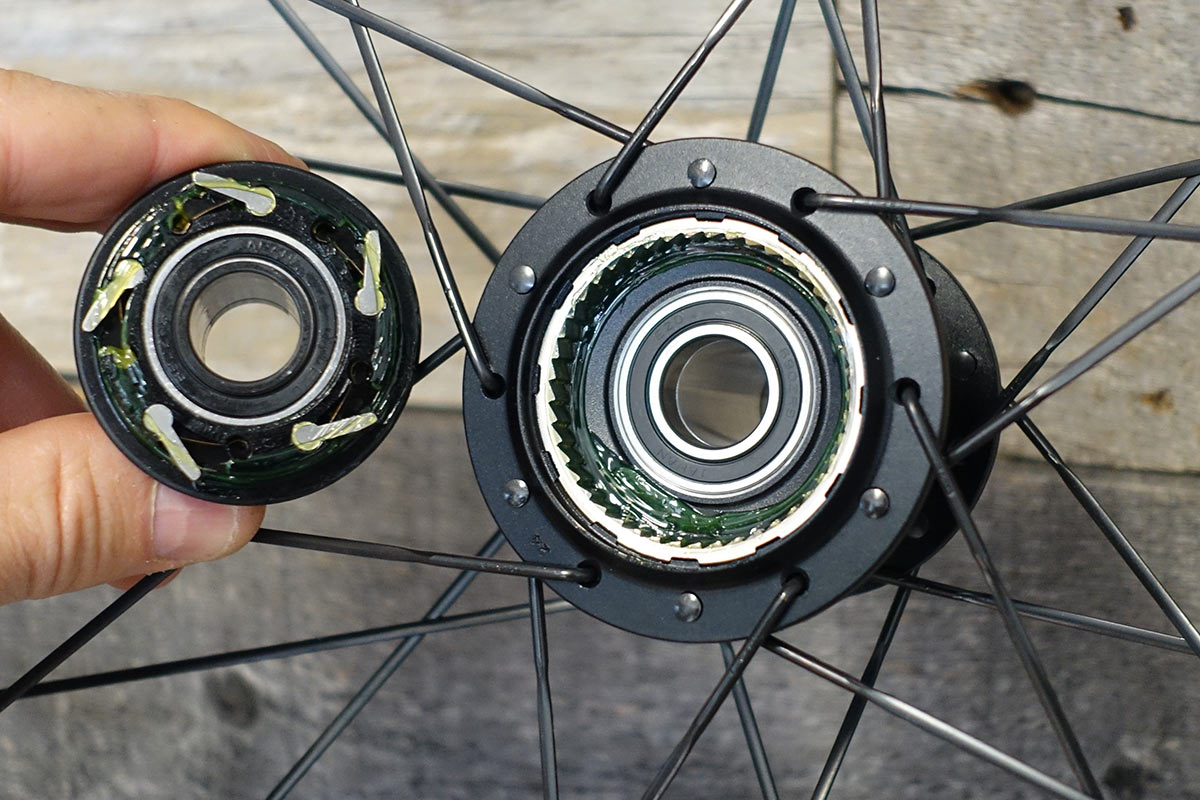 They use a five-pawl system with a 45-tooth ratchet ring for 8º engagement. Wheels are built with 24 Sapim CX-Ray bladed spokes, alloy nipples, and a custom printed alloy valve stem with their logo on it.

Why upgrade from the Vanquish GP?

The newer (and less expensive) Vanquish GP rims use the same mold and layup process, but with a less expensive carbon fiber. The top end Vanquish rims come in anywhere from 50-70g lighter per rim (V4GP is 487g, V6GP is 513g, claimed). And the GP uses a lower end hub (four pawls, 27 ratchets, 13º engagement) and Sapim Race spokes. And it only comes in 40 and 60 depths. 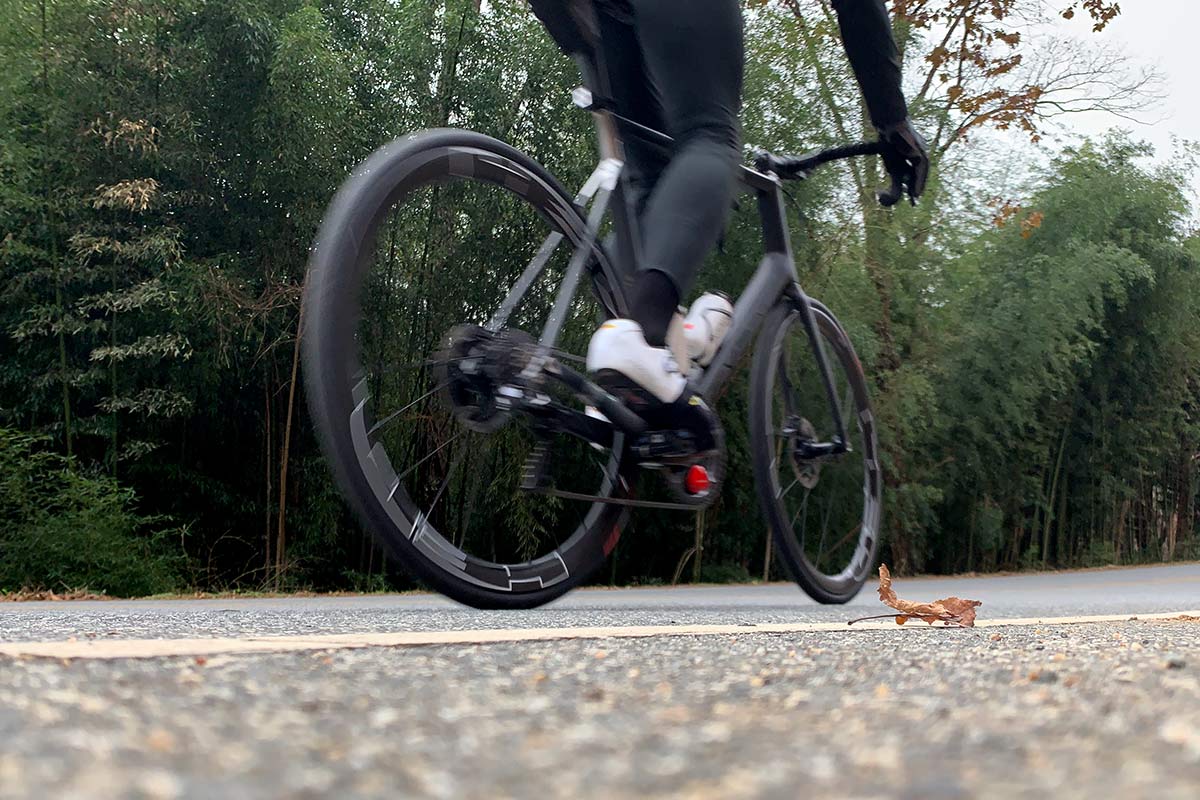 HED’s Vanquish 4 performed really well for me, as any good carbon road bike wheels should when you’re up in the $2,400 wheelset price range. But two things stood out to me: First, they’re really quiet. Even with larger 28mm wide tires, they slipped through the air almost perfectly silently. To me, that suggests their aerodynamic claims are valid, because turbulence can be loud. Bolstering that is how they felt riding, like they were just gliding along. It’s all very subjective until you get into the wind tunnel, but the lack of wind noise coming from the wheels was refreshing. 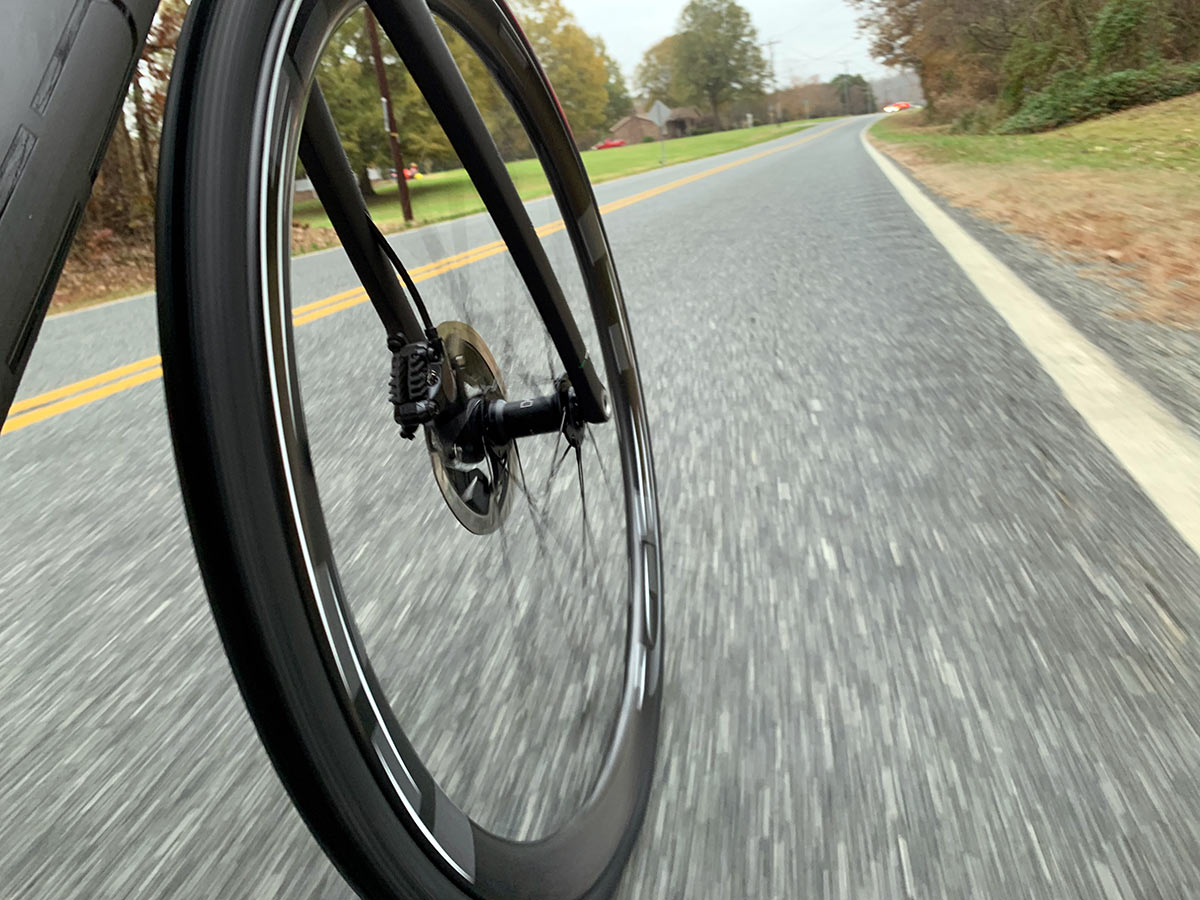 Second is how they handled. Turns were crisp, whether it was a long sweeper, a fast corner, or slaloming dashed street lines. The wheels stayed on track and came in and out of turns in a stable, predictable manner. I chalk this up to the hubs’ solid foundation but of course the entire build plays a role here. 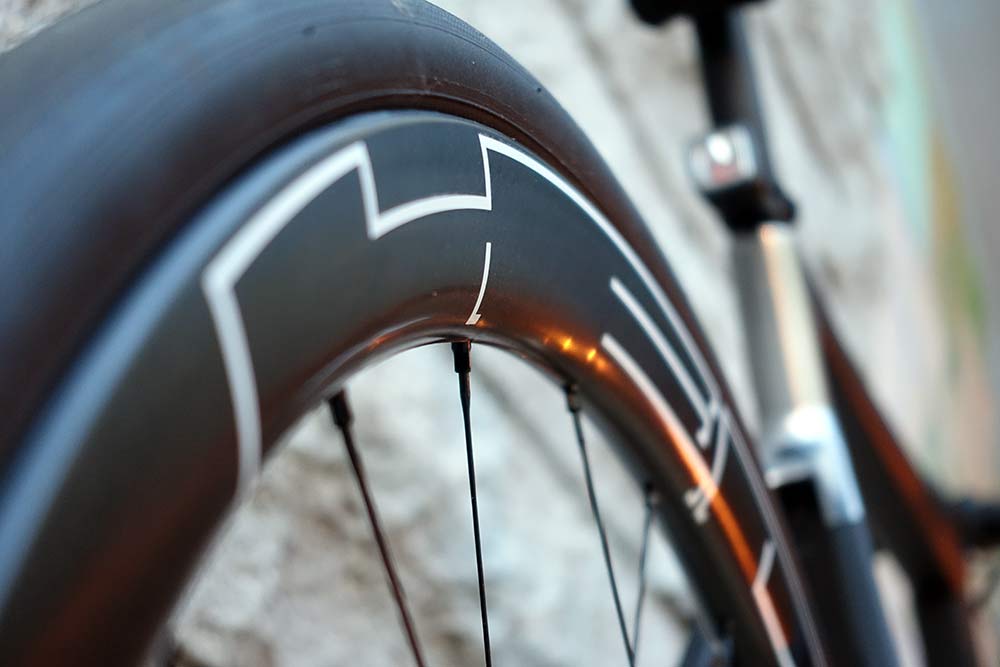 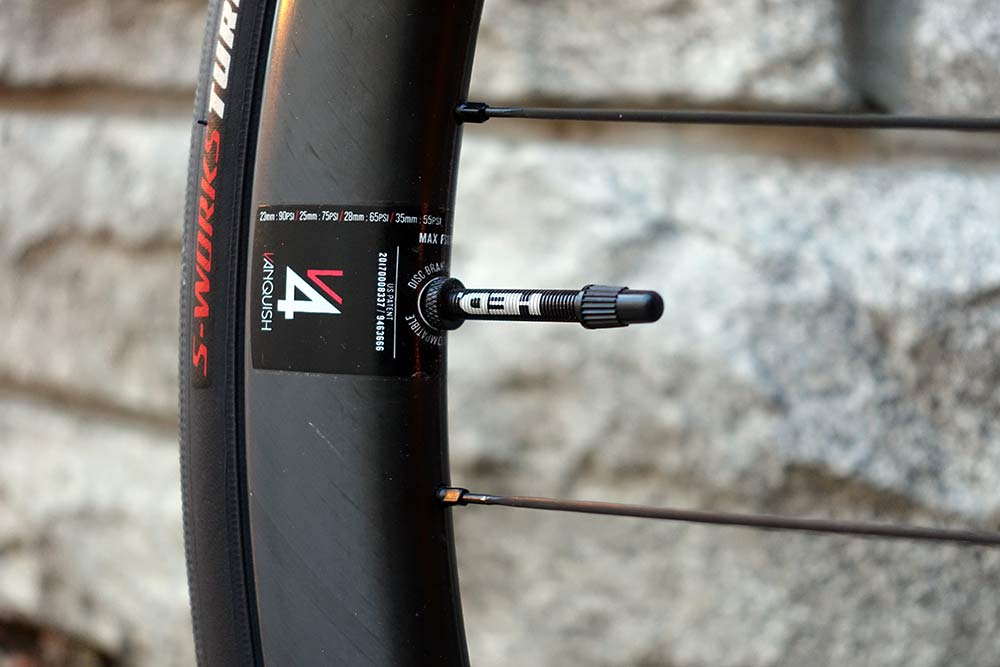 I also really like the appearance and finish. While it’d be nice to have the option for black logos (these are applied in such a way that they’re really not removable, according to HED), at least the lines are small. The custom printed alloy valve stem is also a nice touch, particularly since the logo will always line up facing out. They’re also long, so inflating the tires is easy. 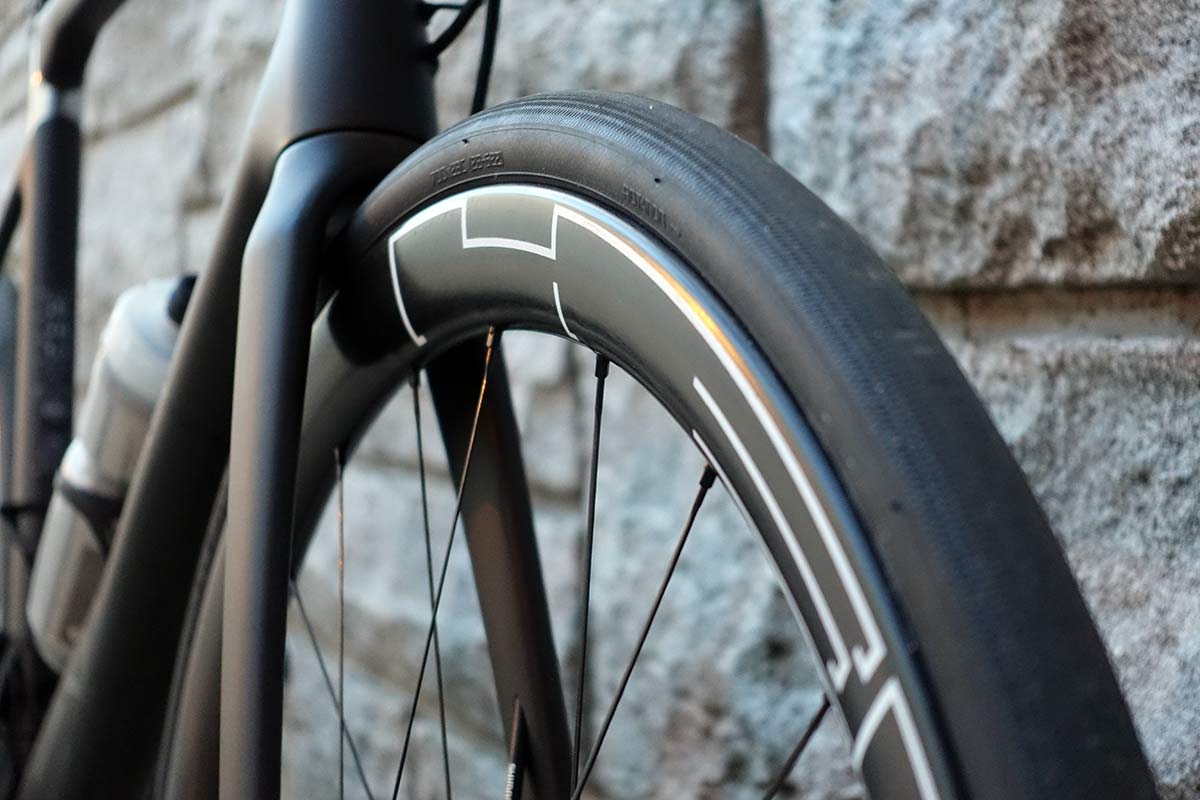 HED says these are perfectly suitable for gravel and cyclocross, too. Which makes me think, as their freshman effort at a full carbon clincher perhaps they overbuilt them slightly just to err on the safe side. The only minor “complaint” I had is that they don’t feel as sprightly on a sprint, which could also be because of the 300g rubber wrapped around each rim, too. But it would be interesting to see what they could do if a lightweight climber’s wheelset were the goal.

That said, the wheels never felt slow or sluggish, and once you’re cruising, they just keep cruising. I’m really enjoying them. And if you’re only wanting to pop for one really expensive high end wheelset that’ll cover all your fast drop bar bikes, the HED Vanquish 4 are worth a look.

Great to this American business get some love they truly deserve. They continuously push the industry forward and this wheel proves how great yet humble they remain.

Could you tell a big difference if you blind tested against Ardennes/Belgium with equal hubs?

That last shot seems to show the top spoke bending pretty hard as it leaves the nipple at the rim – maybe an optical illusion. But more importantly, is the $2400 correct? Including the off brand hub?

K-Pop is dangerous to your health
Reply to  Seraph

You’d pay $2400 for a wheel set with DT 350 hubs? Just when I thought I’ve heard all the absurdities there is to see here. Good luck with that!

I think it’s just the way the light is hitting the rounded top part of the spoke as it tapers to flat.

Interesting; a do it all wheelset made in the USA? Gonna have to head down to the LBS and see if they have any deals running for the holidays – but let’s be honest. These would be a deal at twice the price

Author
Tyler Benedict(@tyler)
Reply to  Aero is everything

They did (maybe still do?) have a Black Friday weekend deal going on some of their wheels. Check their website and our Black Friday or Cyber Monday posts:

EZO bearings and low drag in the same phrase ? I smell BS. EZO bearings stink, big time, and any manufacturer that uses them does not respect their client. They are fine an a 50$ hub, but on this they a total rip off

Dorel, you must be right. HED has been “disrespecting” their faithful clients for the last 35 years. I’m sure they are also trying to save a buck by going with substandard bearings while at the same time investing in domestic manufacturing facilities and equipment to keep jobs local and push the Made in USA movement. It’s fine not to be a HED fan boy, but at least restrain yourself from speaking foolishly.

Tyler, are these actually MADE IN USA? As in rims layed up in USA, hubs machined in USA? Orrrrr is it that the internationally sourced (Made In China) components are assembled in USA? ENVE rims are MADE in USA so we know it is possible, but is that what is really happening here?

Dusty,
We fabricate all our carbon right here in the USA. We cut our own molds here, do the layup here. Build all our wheels here. That’s really what’s happening. Our hubs are our design but we don’t have the capacity to forge and machine them so that part is outsourced to Taiwan. Spokes come from Belgium.

I really like and rate HED wheels as I race on them and the customer service is usually excellent if I need to contact the UK or USA for support. I’m 90% rim brakes at the moment but going forward I have no issue investing my cash is another set of HED’s be that disc or rim

What bike is that pictured in the review?

What kind of bike are you using for this review? Just curious what frames will handle a wheel/tire combo this wide.

GaryZ, they fit in the Pinarello F10 I built for a customer and that bike is about as Racey as they come. They are disc only and most disc bikes have ample clearance.