Recently, I had the chance to head down to Asheville to check out Industry Nine’s new A35 stems. OK, I didn’t drive down to Asheville just to check out some new stems. The main reason I was down there was really to get the scoop on the new Hydra drive mechanism, but the stems were an added bonus – and something that would be launching earlier than the new hubs. Not really a Torch. Gotta be stealthy with early samples.

But that trip meant that I was able to get on a very early Hydra equipped hubset (before it even had a name). The idea being that I could have plenty of miles on the hubset and have the review ready to go by the time of the official launch. You don’t have to ask me twice to ride a new hubset from I9, especially when it’s built into a wheelset as sweet as this. My choice for the Hydra test mule was Industry Nine’s Enduro310 Carbon 24 hole wheels. I had just received a new Stumpjumper tester from Specialized, and the wide carbon rims were a perfect match for the 29 x 2.6″ tires. At the same time, I was hopeful that the lower 24 hole spoke count would be a better match for me, as I often find carbon wheels to have an overly stiff ride quality for smaller riders like me . Given the inherent stiffness of the Industry Nine aluminum spoke system, this seems like an even greater consideration when choosing a wheelset. Fortunately, I9 gives you the option with the Enduro310 of running 32 spokes for larger (260lbs/118kg max), or more aggressive riders, or the 24 spokes for those that don’t need the extra strength (220lb/100kg max).

As soon as my tires touched the dirt on the new wheels, the bike was transformed. It’s hard to pinpoint what came first – the unbelievable drive out of the rear hub, or the silky smooth ride quality from the wheels (and 120 tpi Maxxis 2.6″ tires). 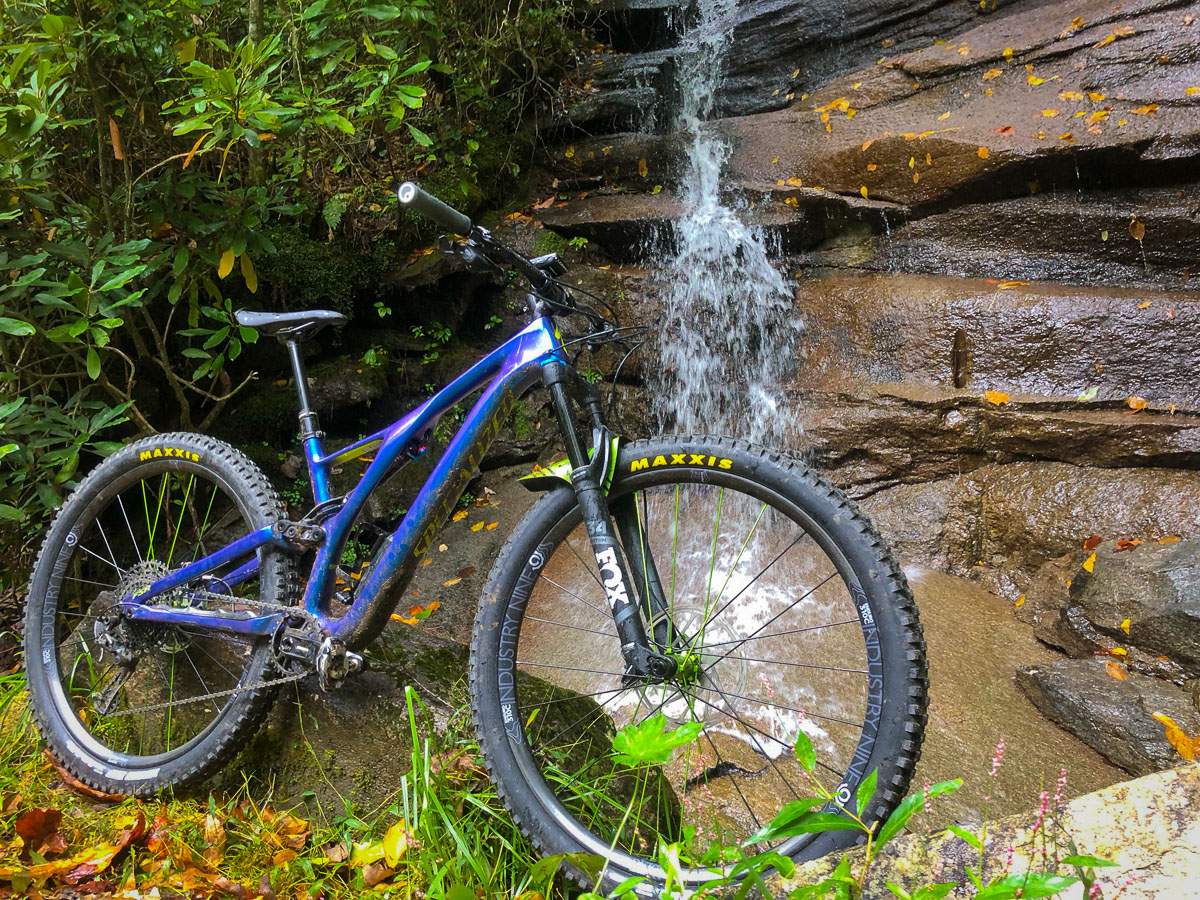 My very first ride on the wheels started out pretty nice, but quickly turned into a total washout with drenching rain. Asheville’s soil has a lot of mica and sand to it, so when combined with sloppy conditions, it’s a true test of your hub’s seals. Unsurprisingly, with this as Industry Nine’s home turf, the hubs are still rolling as if they were new. From the first pedal stroke, it’s clear that Hydra is in a class of its own. Yes, there are hubs out there that offer infinite “instant” engagement, but they don’t quite have the snap that the I9 hub provides (and they’re also a good bit heavier). And with 690 POE, it is nearly instant. The increase in engagement is such a massive leap from the previous I9 hub design that it’s a little difficult to comprehend, honestly. It feels noticeably smoother when you’re coasting along, but at any point when you need a quick burst of power, the engagement is there before you even realize it.

High engagement hubs are definitely one of those things that you can’t truly appreciate until you’ve ridden one for awhile, and then go back to something else. Up until riding Hydra, I was perfectly happy with the current I9 Torch system. But after riding Hydra? There’s no way I want to go back. When it comes to the wheels themselves, they’re just as lust-worthy. Born from I9’s Ano Lab, I gave their design team carte blanche in terms of the custom color scheme. I’m quite pleased with the result, but if you want more artistic control, you can choose the color of each and every spoke. As mentioned earlier, I am in love with the ride quality of these wheels. Naturally, they were my pick for Editor’s Choice, and that was before I could even talk about the hubs. I started riding these in the middle of October, and have put a substantial amount of miles on them since. Even with the lower tire pressures associated with 2.6″ tires and a few rim strikes, the rims are still in perfect condition. They were delivered in perfect true, and they still are, without touching a spoke.

More importantly, the ride quality is as sweet as ever – between the tires and the wheels, it’s like riding a magic carpet over the endless expanse of roots around Asheville – which is probably why Industry Nine’s Vice President, Jacob McGahey, rides a nearly identical set up for his home trails.

Industry Nine partners with Reynolds to build their carbon rims to their exact specifications. While the carbon and resin may be similar to other Reynolds rims on the market, the shape, dimensions, and ride characteristics are dictated by Industry Nine. The result seems to be a genuinely durable rim with an incredible feel. Shipped as tubeless ready, the hookless rims have a 31mm inner width, and 36mm outer width, and are intended for 2.3-2.8″ tires. The rims come pre-taped, though it seems more like heat shrink material and less like tape. Whatever it is, it works – it goes bead to bead, is quite durable, and doesn’t let sealant leak in like some tapes. The wheels seat up tubeless very easy, and the I9 tubeless valves work very well and match your choice of anodization. Or not. 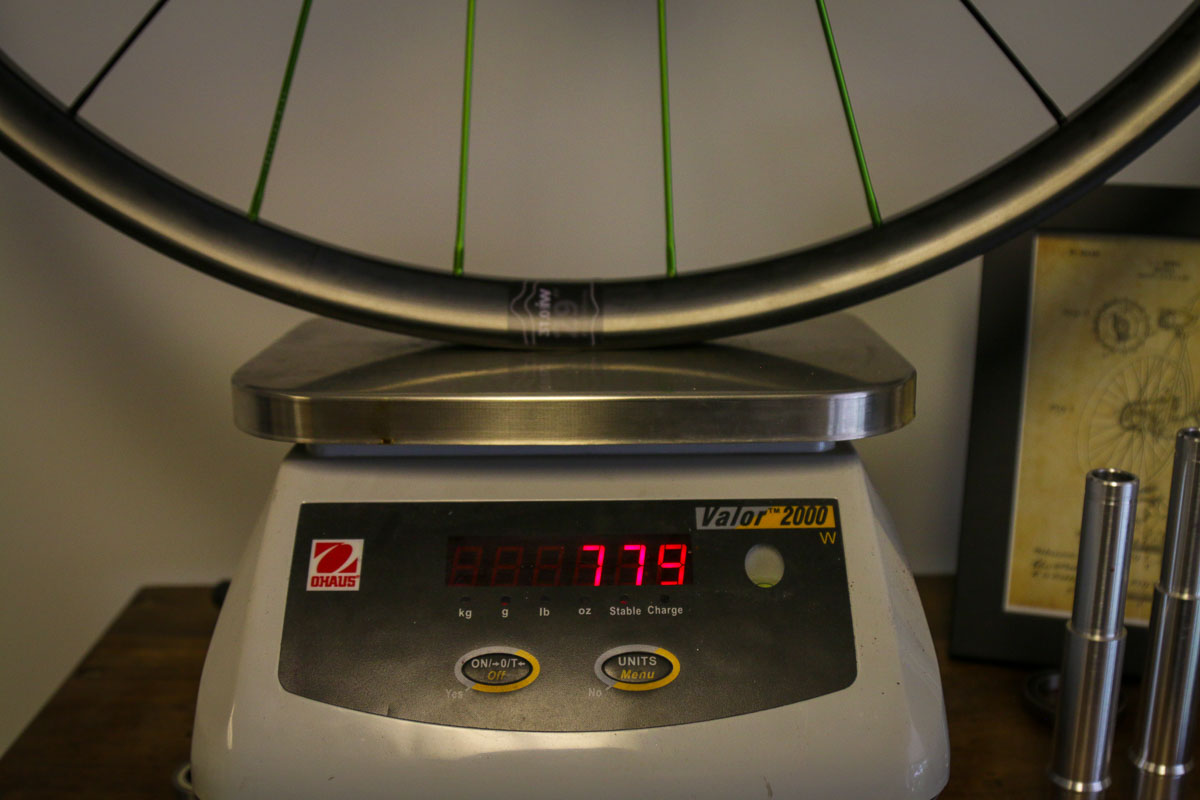 They’re also impressively light for what they are. 1689g (with tape and valves) for a set of burly, enduro capable wheels with wide rims and insane hub engagement.

Available with end caps to fit nearly every standard mountain bike configuration, my test set was a 29″ Boost 12 x 148mm rear and 15 x 110 up front with 6 bolt rotor mounts. As shown, these wheels would run $2560 – $2400 for the base wheelset in all black, and $160 more for the full custom anodization scheme. Certainly not a budget build by any means, but considering these are my favorite mountain bike wheels to date, worth every penny?

For more on the Hydra drive mechanism, check out our first post here.

What a rip off price for an anchor wheels… Better luck next time folks.

No- 1700g is light for enduro wheels. In my opinion light for everyday trail wheels, too.

I find that their valve stems clog really easily, a problem I never had with steel stems.

How about more info on how the hubs work? Sooooo glad I bought this exact set of wheels with the Torch hubs (orange spokes) last fall. Sarcasm

There’s a separate article about the hubs. Like two articles before this one.

I have a set of last years ULCX 235 carbons with the steel spokes and I get where you are coming from Jason. But that said, mine are the nicest set of wheels I have ever ridden. I can’t honestly comprehend how the new ones can be that much better. (never mind that I can’t afford to find out). You don’t have lousy wheels, just lousy timing. (glass half full).

I love the new wheels, they’re great. I’m juts a little bitter because I have about 40mi on them. When I ordered them no one down there mentioned something new coming out shortly. I would have waited. But you’re correct the Enduro 310 carbons, aluminum straight pull spokes and Torch hubs are NICE! I’m not really complaining. 🙂

There is an age old saying…best thing to do when you buy a new car….stop shopping for cars. Same can be said for wheels on your bike.

Had to schedule everything before leaving for a trip, so wasn’t able to include the link at the time of publishing.