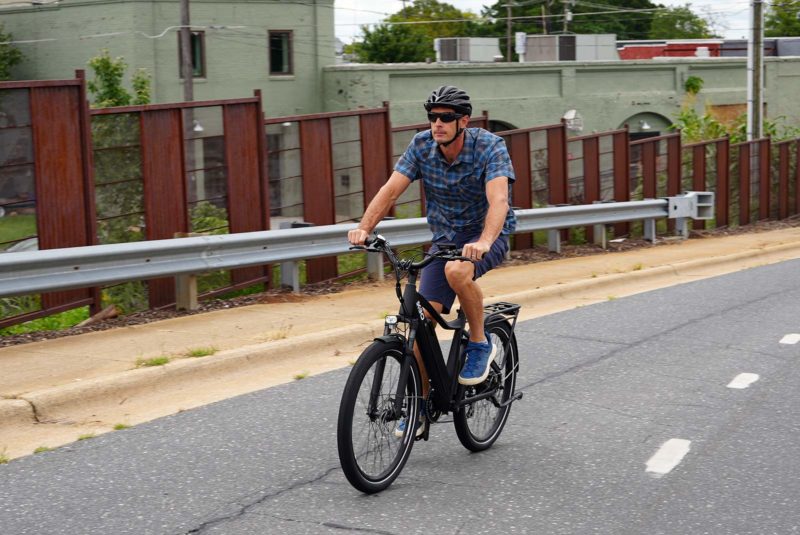 The KBO Breeze is one of the most affordable full-featured commuter e-bikes on the market, with a price tag of just $1,500. So we were curious, what exactly does that get you? And is the bike any good?

If I’m being honest, as a “cyclist”, the KBO Breeze does not excite me. Just as a Ford Fiesta probably doesn’t excite the test drivers at Autowise or Car & Driver. But just because I’m used to more expensive performance bikes, and just because I’m not the target market, doesn’t mean I’m not curious.

At a glance, the KBO may not win design awards, but the numbers and specs are impressive for the price. So, we took it for a spin… 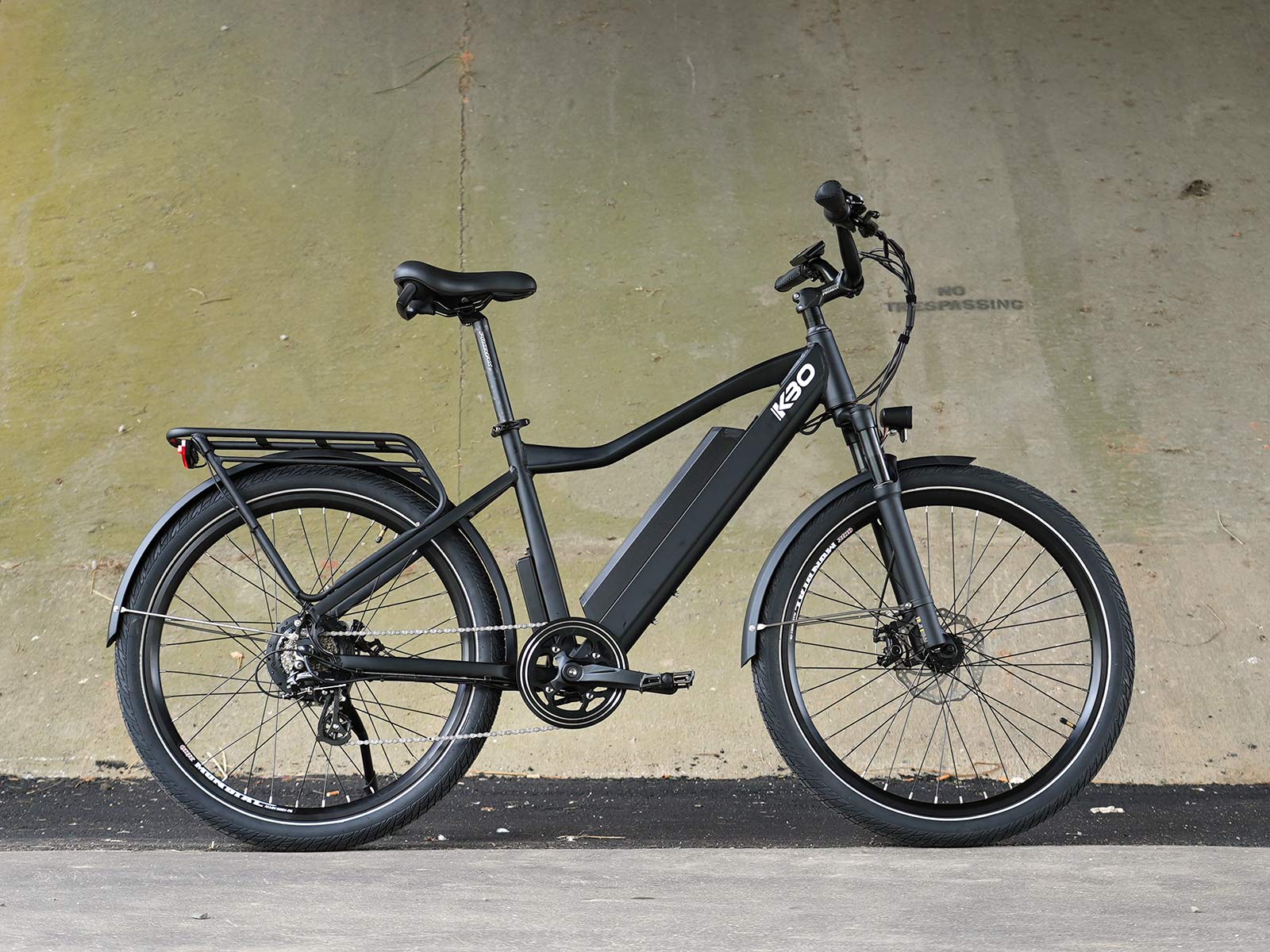 The KBO Breeze comes in one size designed to fit riders from 5’4″ to 6’4″ tall. We tested it in black, but it’s available in orange as well, including a limited edition orange with fully paint-matched orange accessories, too. They offer a step-thru version as well.

Our test riders ranged from 5’6″ up to 6’2″, and were about half cycling enthusiasts that ride regularly, and half “normal” people who just ride around town to get from point A to B or cruise the neighborhood. The latter is definitely the target market for this bike…more on that in a minute.

Regarding sizing, though, the Breeze worked well enough for everyone that tried it, and the standover height is low enough even for shorter riders. Some of the taller riders, myself (6’2″) included felt that the cockpit reach was just a little bit short, but everyone agreed it worked well enough. 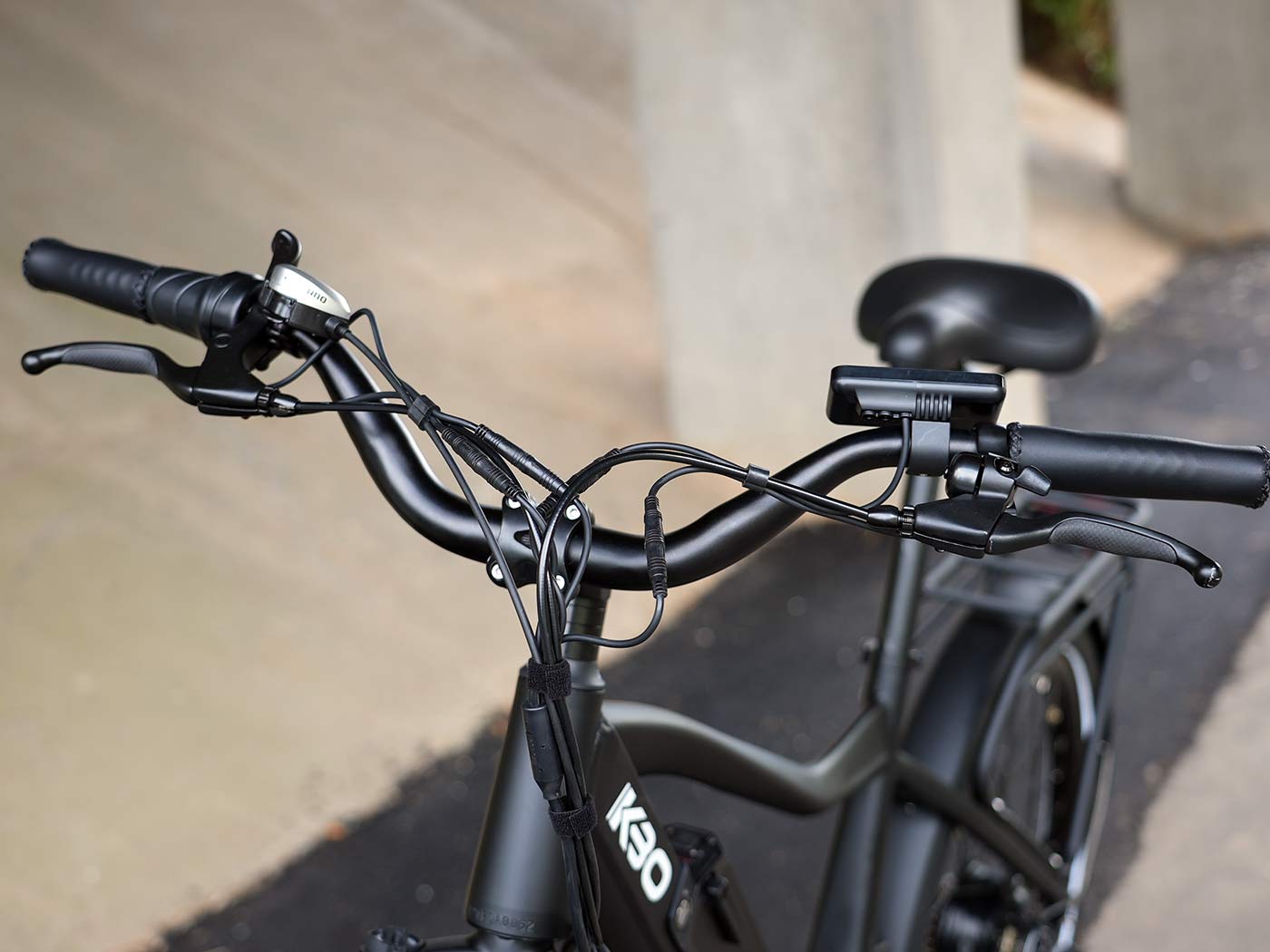 The controls and brakes each get their own wire, each with a plug connecting them at the front of the bike. It’s jumbled and unsightly, and almost assuredly done to speed up assembly, but it works, and we never had any problems with anything coming loose.

The motor controls are on the left and use a simple three-button layout. You turn it on and off from here, cycle through the data fields, adjust assist levels, and even turn on the headlamp.

There’s a mini bike bell cleverly integrated into the brake lever that’s easy to reach and effectively loud without being obnoxious. The grips are comfy, but they rotate too easily and I found myself constantly twisting them back into position.

On the right is the throttle, the shifter, and a brake lever with sensor that activates the brake light when you slow down. Yes, there’s a throttle, get over it, it’s legal, and no, it does not classify this bike as a moped. Remember, if you’re thinking this is evil, you are not the target market, and I’ll explain why it’s actually a very useful feature in a minute.

Kudos to KBO for including a mostly Shimano drivetrain (with a KMC chain) at this price point. That said, this is the most ergonomically awful shifter I’ve ever used, made worse by it’s placement so far from the grip. It actually shifts quite well, it’s just a pain to use. 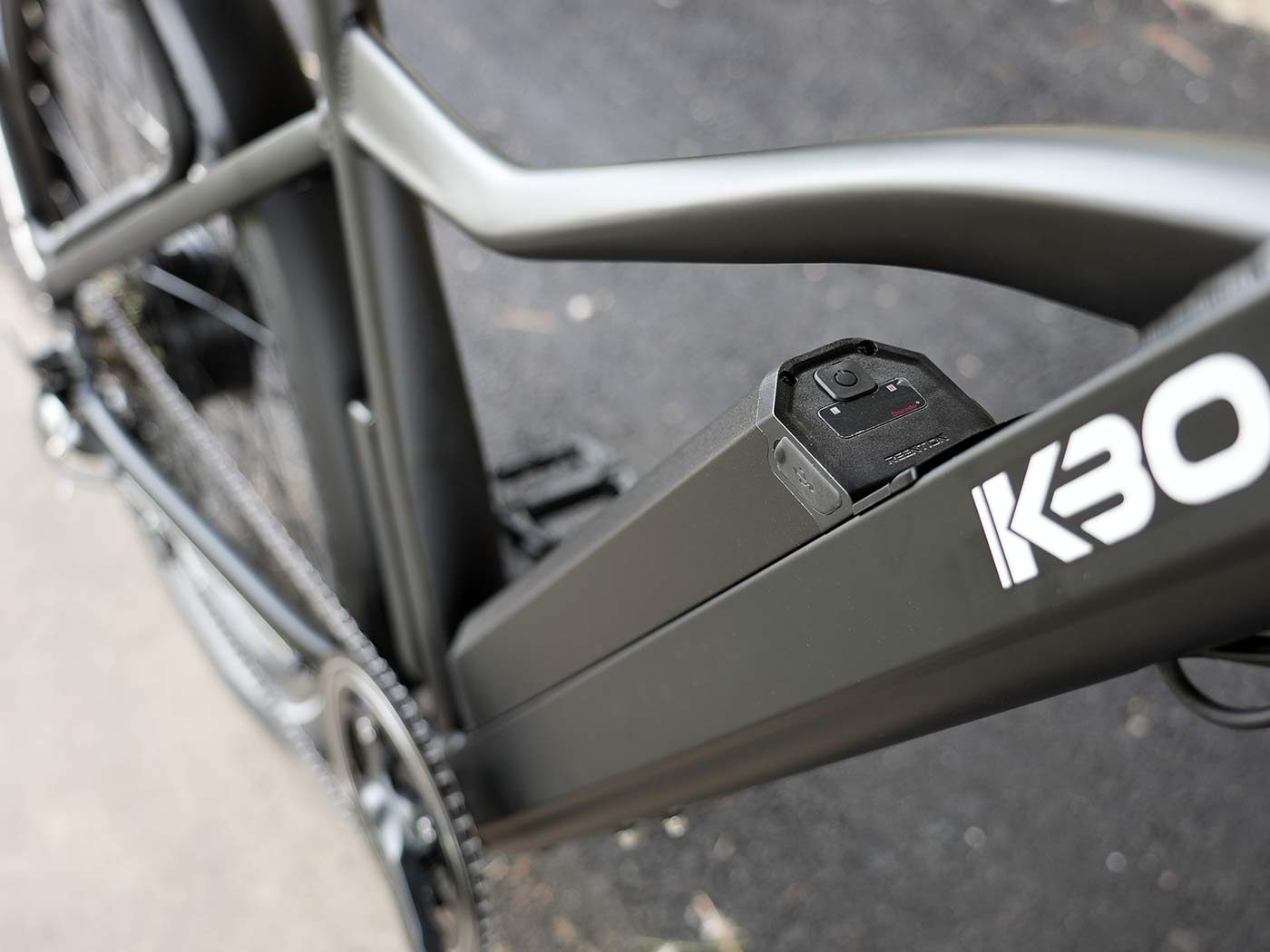 The battery is a monster 768Wh unit powering the 48V system. The included 3.0 amp charger tops it off in just 5 hours, giving you up to 55+ miles of range. It’s removable if you need to bring it inside for charging, or if you want to carry a spare to extend your range.

While this entire drive system is unbranded (meaning, it’s not a Bosch or Shimano, etc., motor and battery system), it does use Samsung/LG battery cells for reliable, safe power delivery and up to 900 full charge cycles. 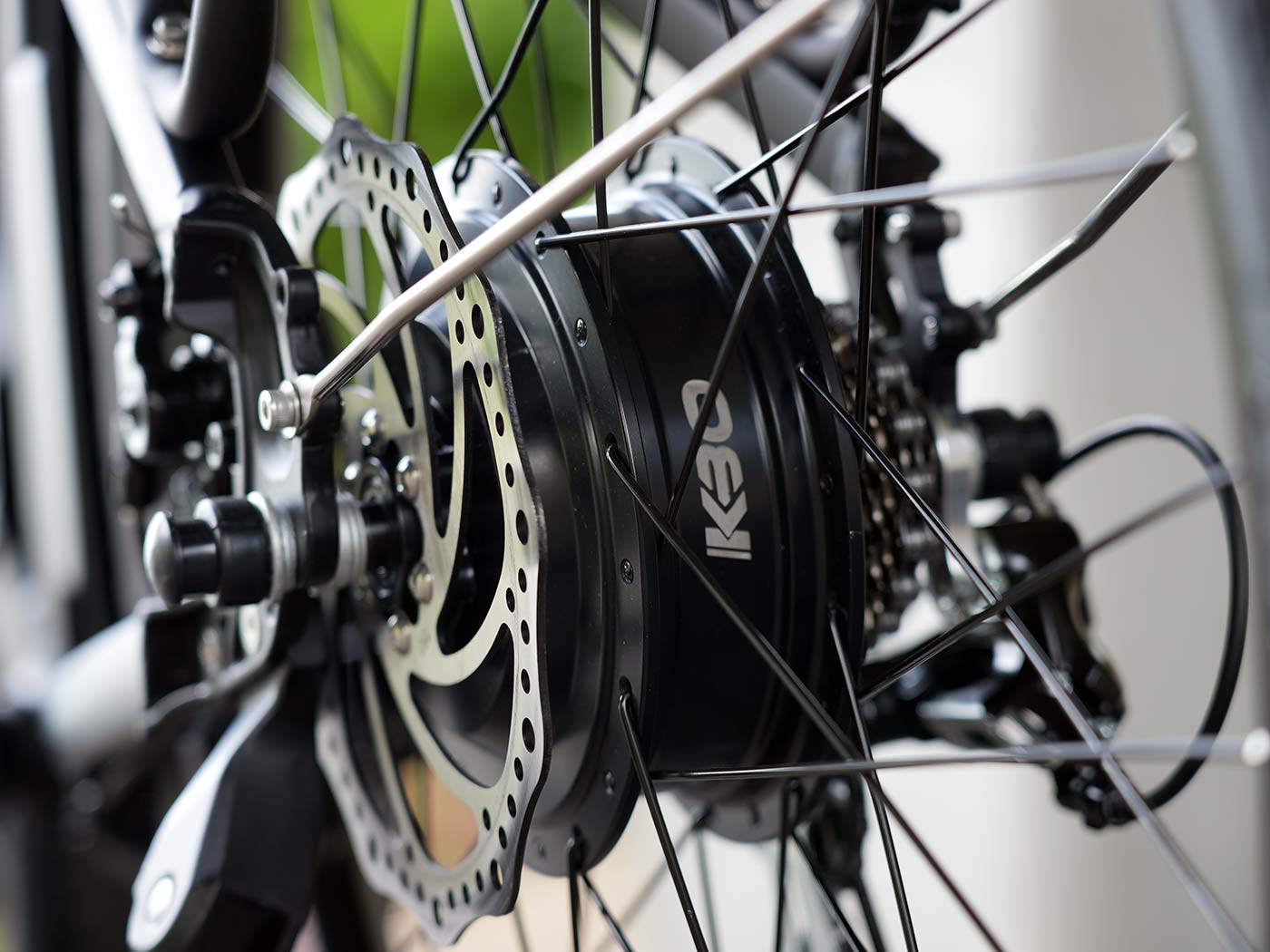 The KBO Breeze uses a hub motor, which is common at this price point. That keeps the frame looking normal, with a normal crankset and bottom bracket that are easily replaced. 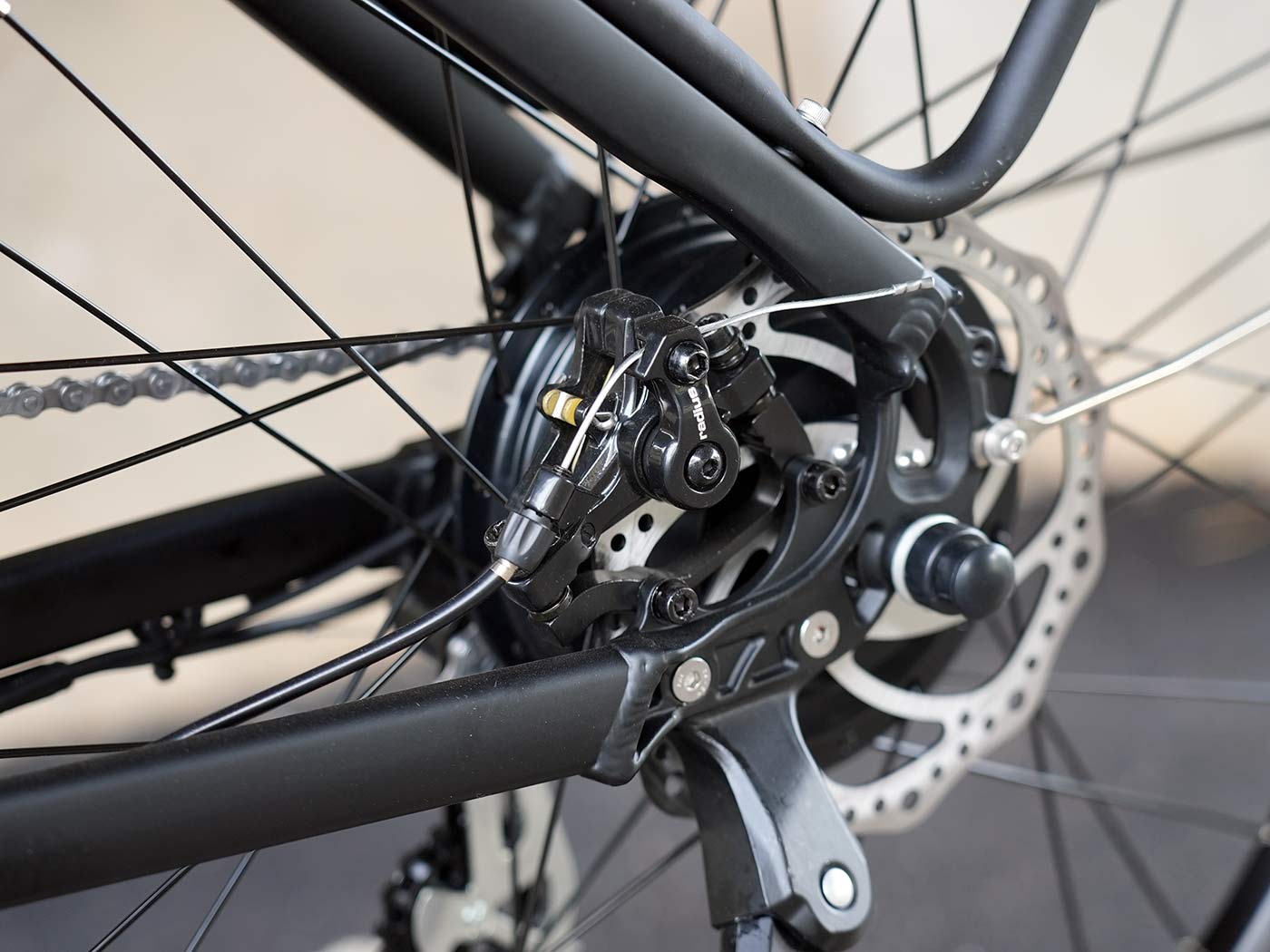 It uses mechanical disc brakes, which work well enough. There’s a bit of pulsing until you squeeze the lever hard, and they’re strong enough to lock up the rear wheel, but not so strong that you’d endo. 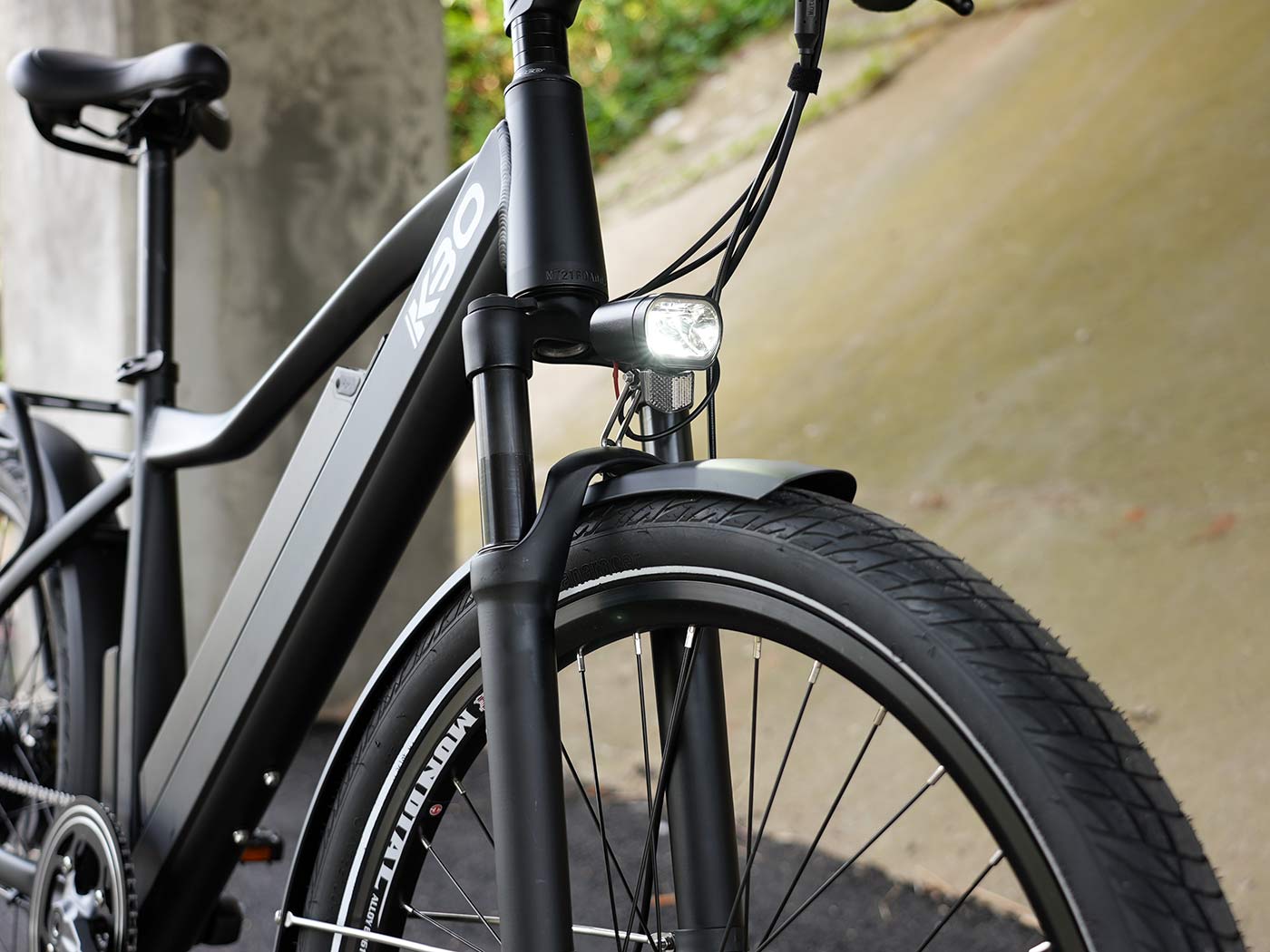 Up front is a basic, generic 80mm travel fork that I both liked and disliked. It’s squishy, but didn’t bottom out, making it very effective at taming rough sidewalks, pot holes, curbs, etc. But, it had a lot of fore-aft flex that created a lot of brake shudder when I braked hard up front.

To me, this means the long-term durability of the fork is questionable, even if it is quite comfortable in the short term. There is a pre-load adjustment (even maxed out, it’s still squishy) and variable compression damping (we left it wide open, but it will go all the way to a full lockout). 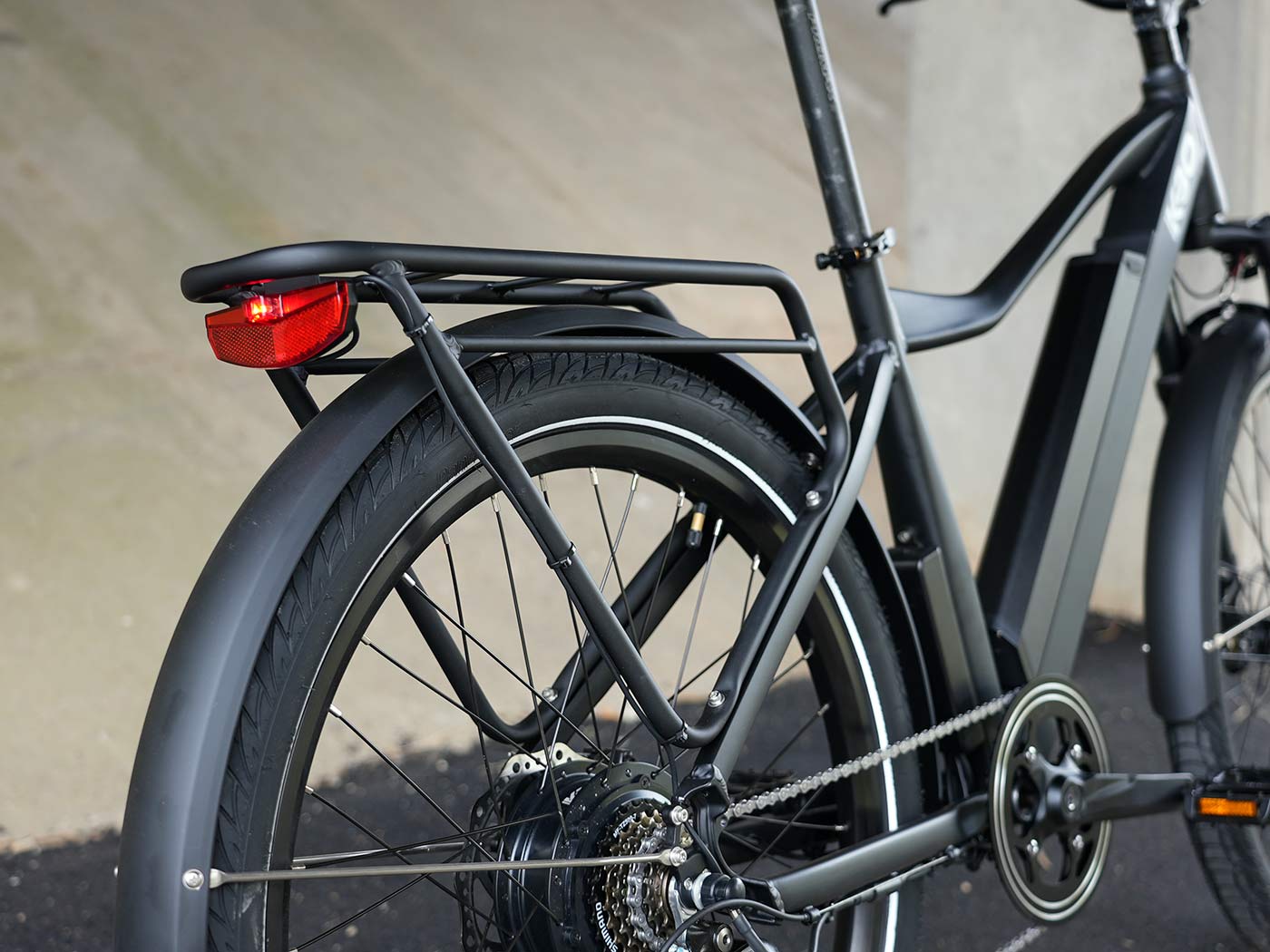 While the brakes and cockpit and fork are nothing to brag about, there are some features that are surprisingly good for the price. Namely, a full-size aluminum rack and a combined total 300lb payload capacity; full-coverage aluminum fenders that didn’t rub anywhere; and… 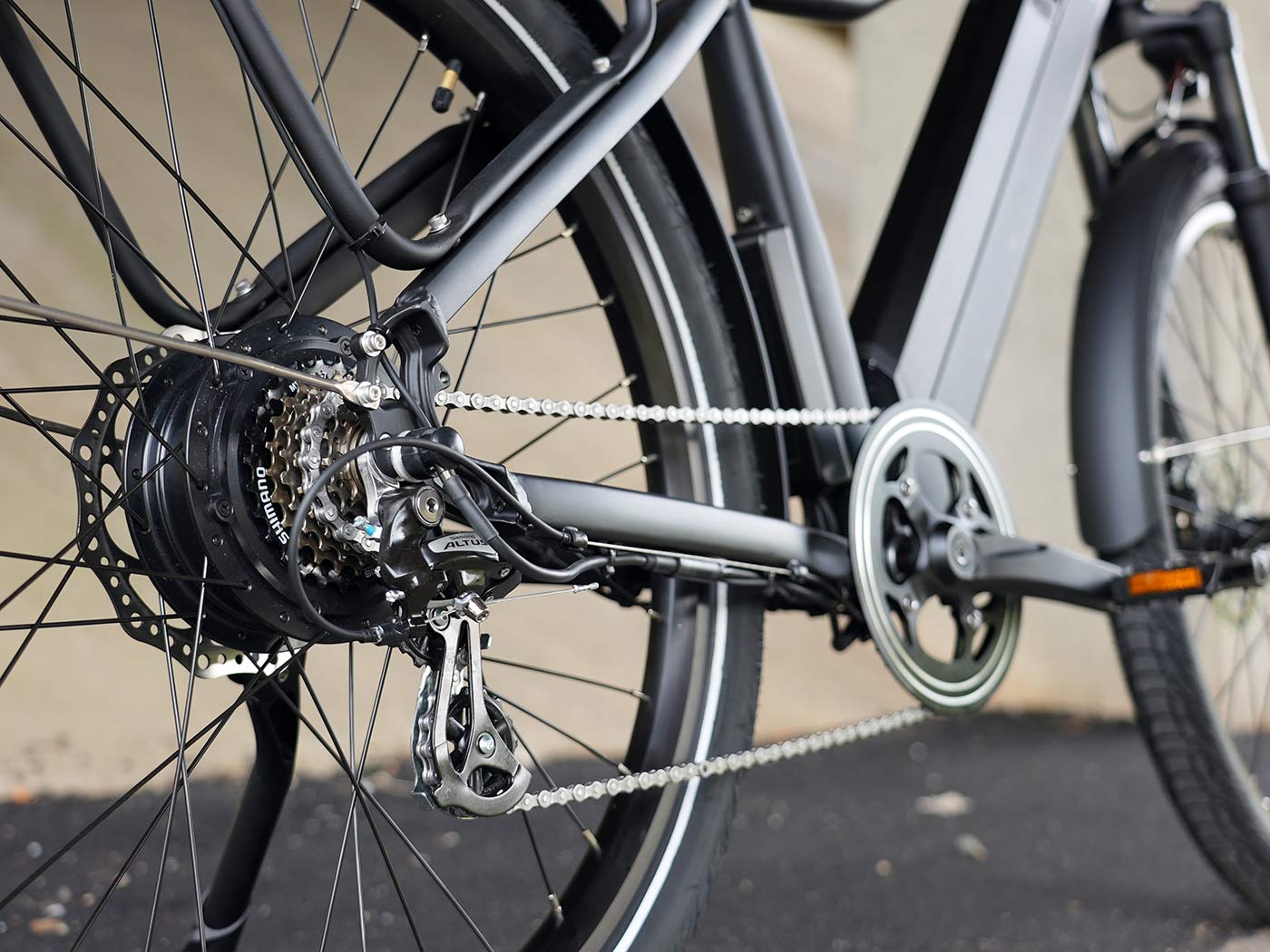 …a proper Shimano drivetrain. It’s only 7-speeds, but it shifts like a good Shimano group should and worked fantastically well. More bonus points for including metal Wellgo pedals and Panaracer 27.5 x 2.4″ tires, too.

Any bike at this price is going to make concessions, but it seems like KBO spent the money where it would be most noticeable. Even the brake levers have inset rubber sections on the front for better grip.

The bike comes with a derailleur guard to be installed, but I couldn’t quite get it to fit right, so I left it off. 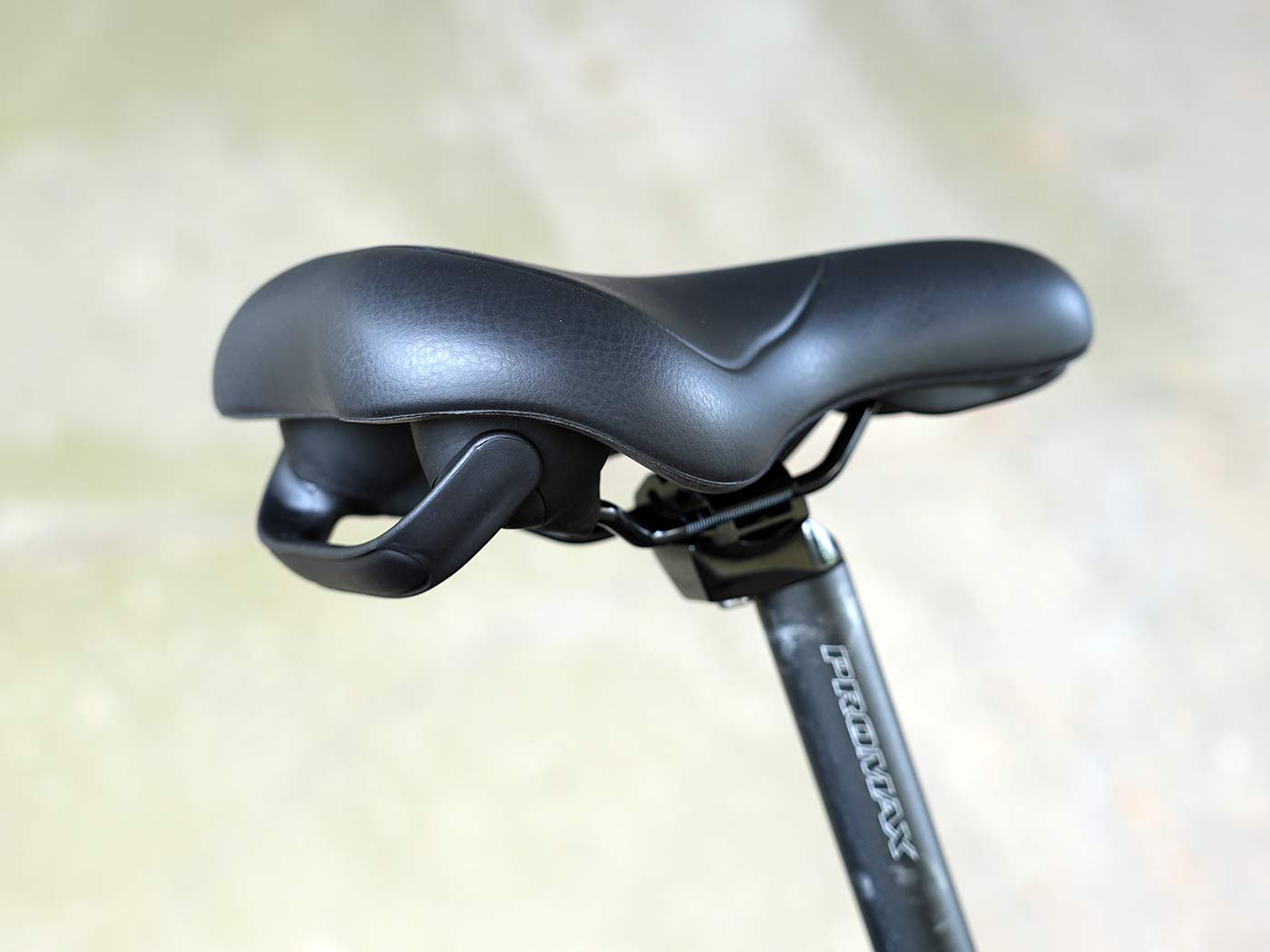 The saddle is comfortable enough, and has a big handle to make it easier to lift this 65lb bike onto a hitch rack, etc.

The bike includes a multitool that has all of the bits and pieces needed to assemble the bike. The instructions are decent; most people should be able to figure it out. 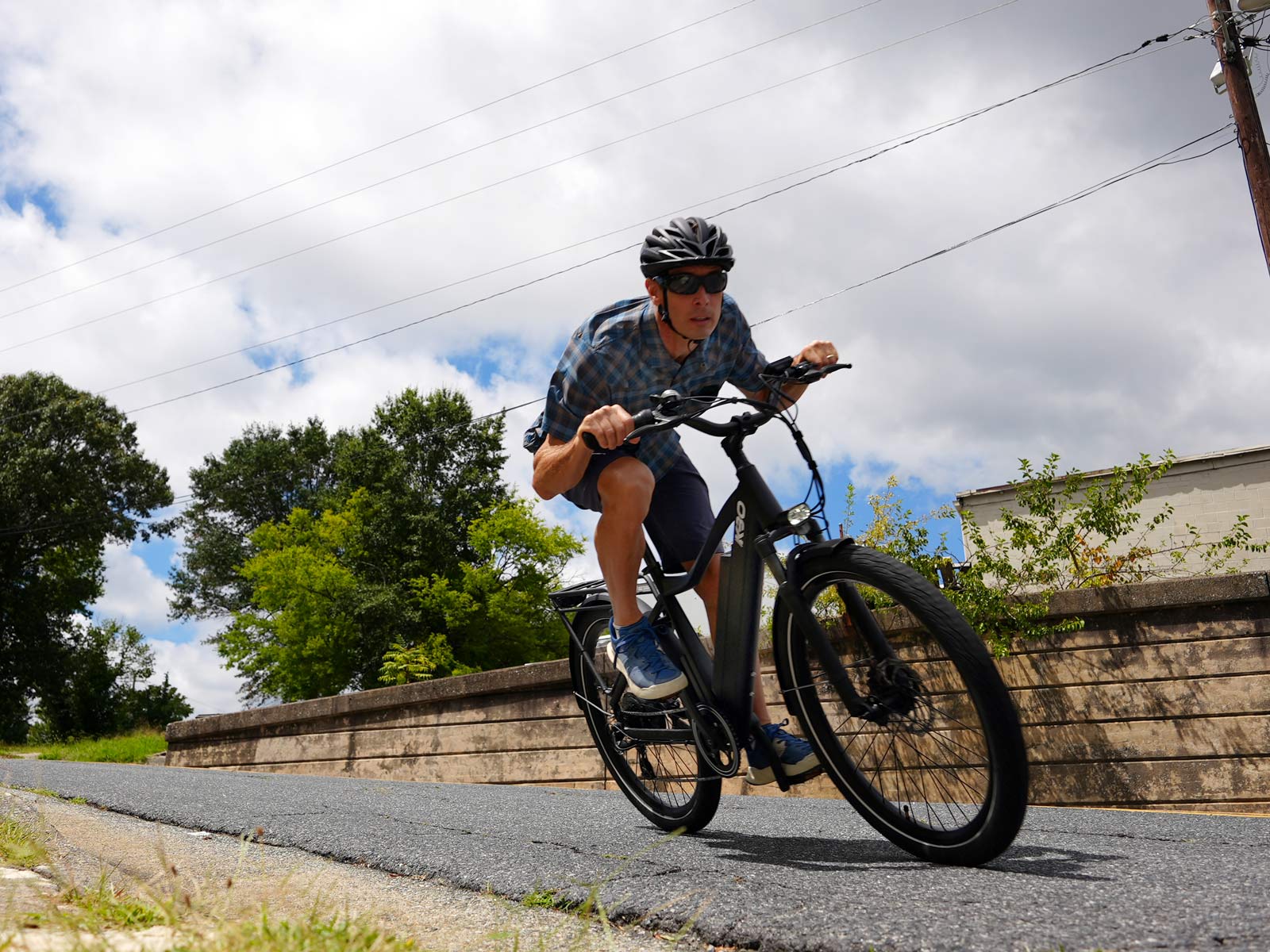 The big question is “How does it ride?”

The answer is, not bad. Let’s start with the handling. KBO doesn’t list the head angle on its geometry chart, but it’s definitely steeper than other city commuter e-bikes I’ve ridden. That made the handling oddly quick at low speeds, and slightly less stable at higher speeds.

It’s not dangerous, but it certainly doesn’t handle as well as something from a “performance” bike brand like Specialized or Trek. Again, Fiesta versus Ferrari…they’re for different customers. 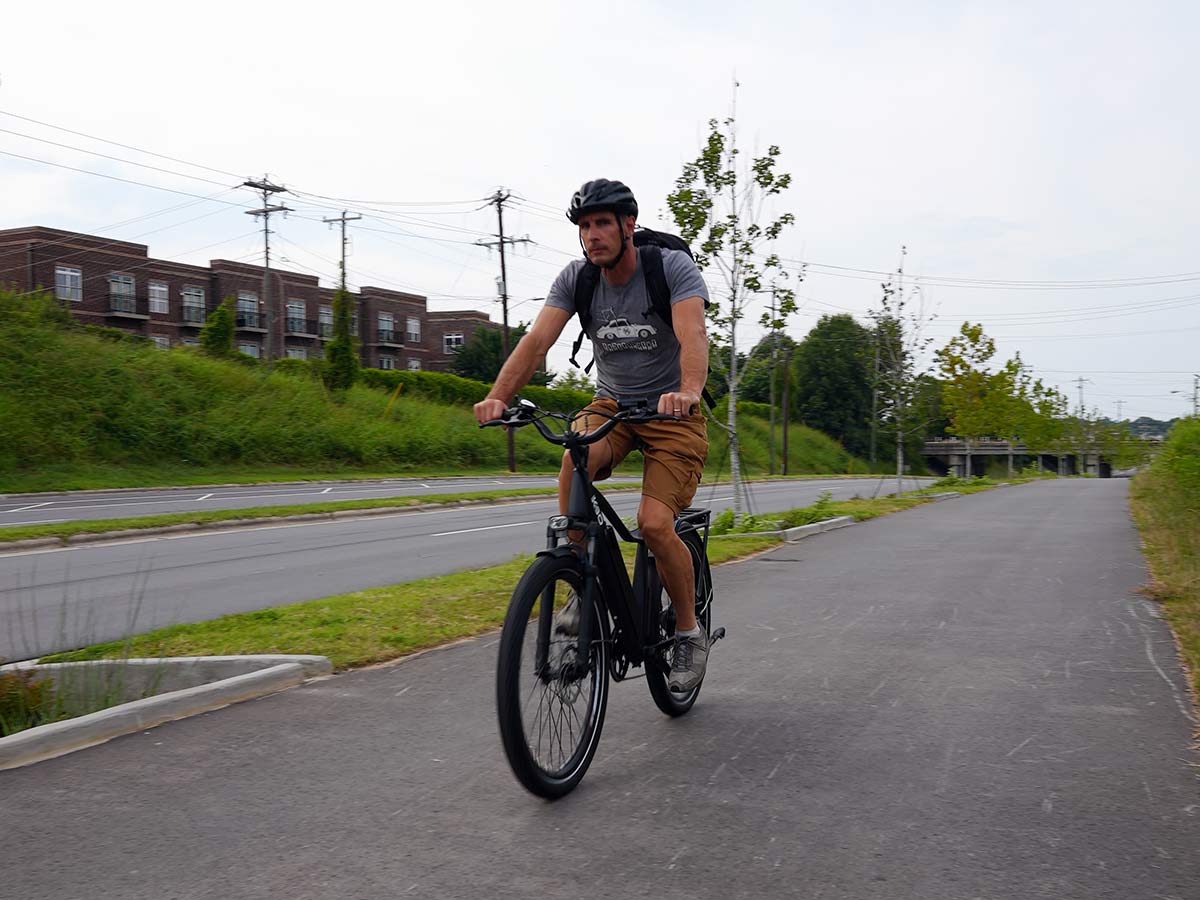 For cruising around town, commuting to work, or riding to school, it’s fine. For those who just need a little help on the hills when they’re out for exercise, it’s fine.

So, let’s talk power. There’s plenty of it.

The Breeze is very peppy, delivering all of its power at once. Which is both grin-inducing fun, and also disconcerting.

And here’s the big difference between a bike like this and one using a premium drive system like Bosch: The power delivery is far less refined here.

That’s because it’s using a simple cadence sensor to detect pedaling, then sends 100% of the power to the motor. In contrast, the torque-based systems on higher-end bikes will gradually deliver more power as you start pedaling harder.

Meaning, when you first start off, it eases into the power delivery for a smooth launch. The KBO Breeze, however, just sends you off with a bang, especially if have it set on one of the higher levels… 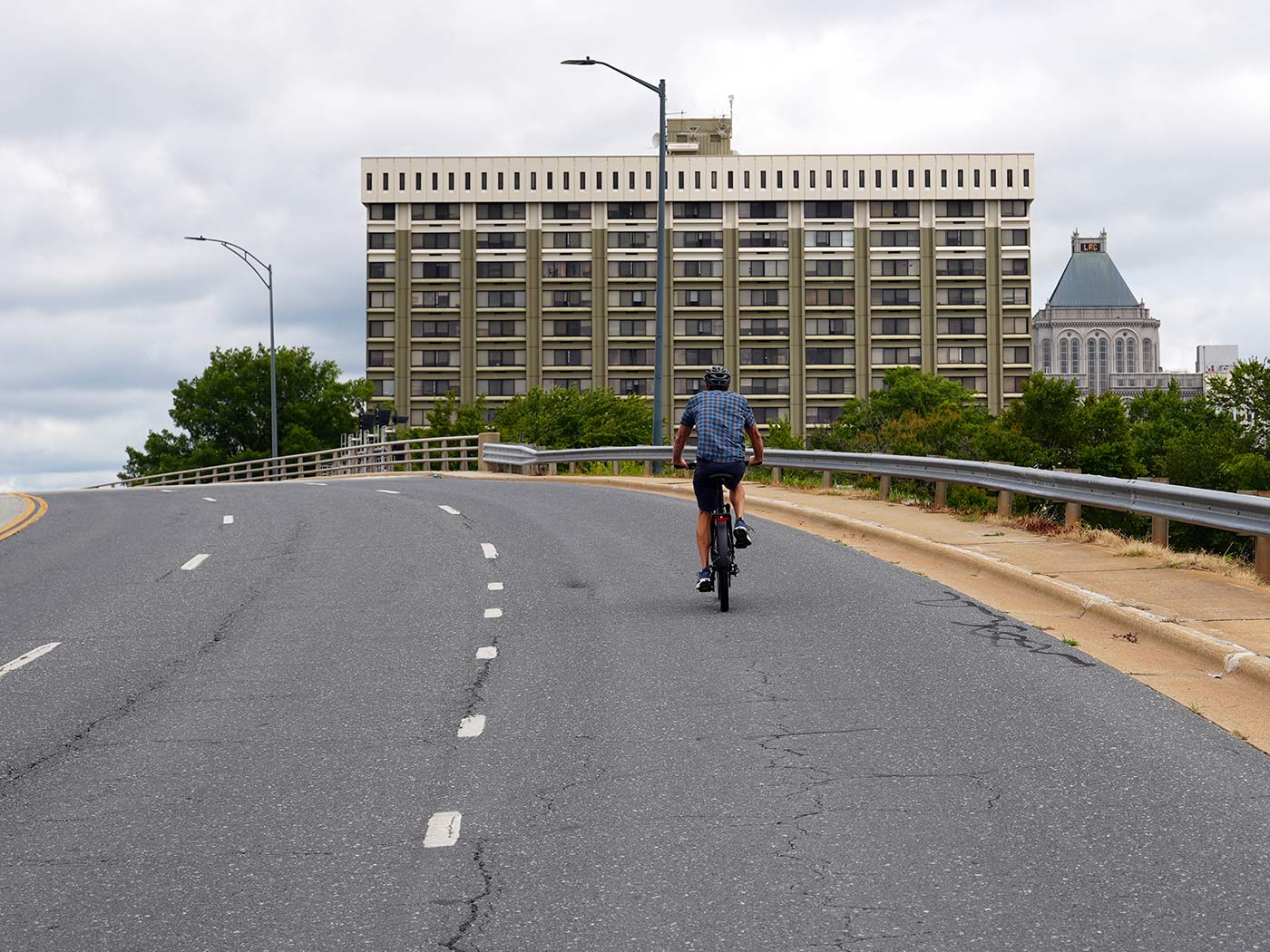 This emulated the type of gradual power delivery I’m used to, but I’d have to remember to dial it back down if I came to a stop lest I launch into something or someone when starting back again, especially if it was in an easy gear.

I found that we all mainly just left it in the harder gears, then used the motor to overcome that at the start. Which is where the throttle comes in handy. Just goose it a little and it’ll get you going from a hard gear, then let the assist take over. It kinda works brilliantly that way, and seemed much safer overall.

Also, when you don’t feel like pedaling, it’s kinda nice having that option, too. 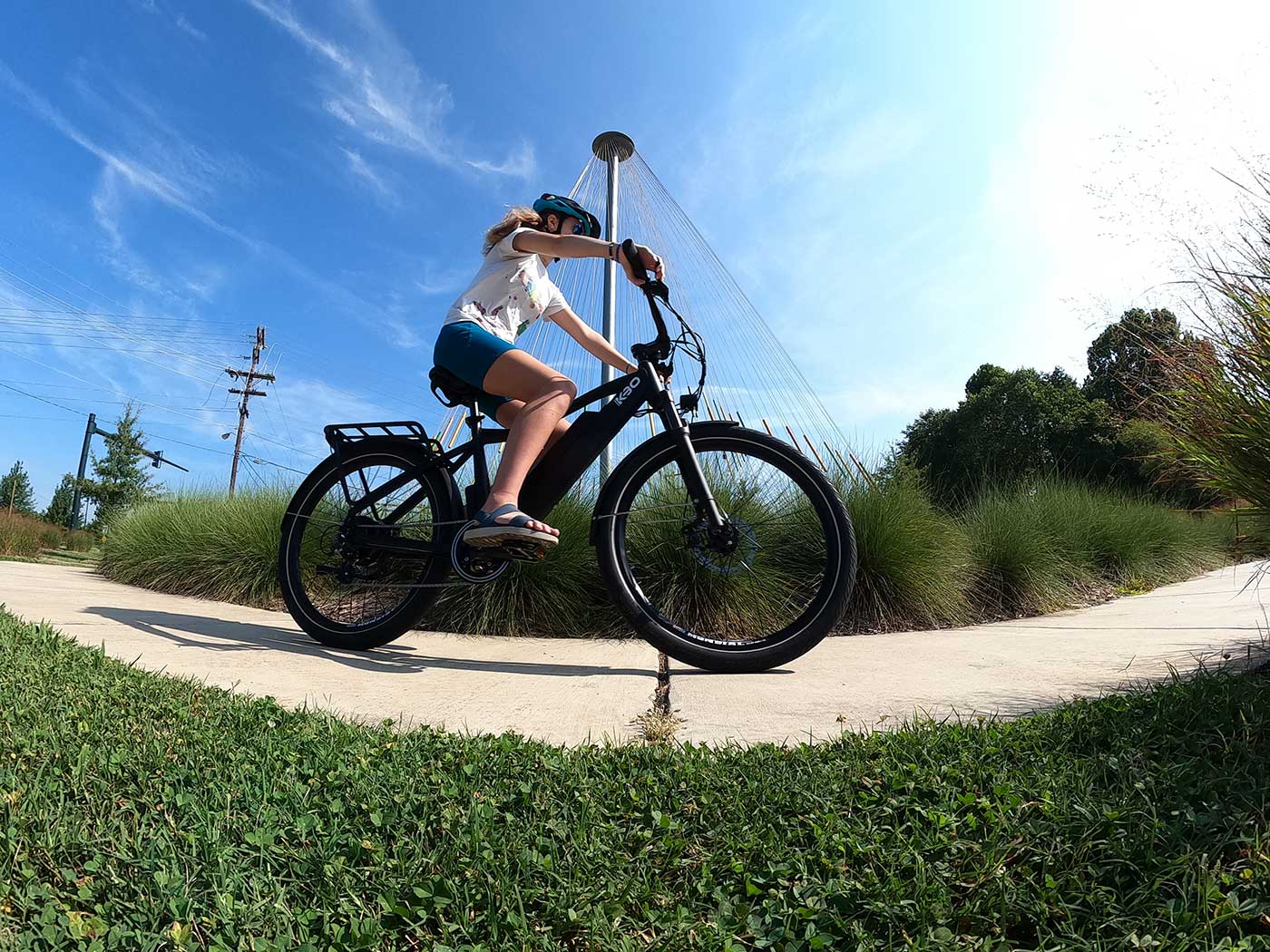 Which is why my kids think this bike is awesome.

They’ve been riding it more than me, and even though we have several $5,000+ e-bikes in our stable, they both seem to want to ride this one now. Their eyes glaze over when I tried to explain the power delivery nuances…they don’t care. It’s just fun.

Which almost perfectly illustrates the point that it’s delivering the feature set and “fun” that an average person would want out of an e-bike, at a price that makes it very accessible. 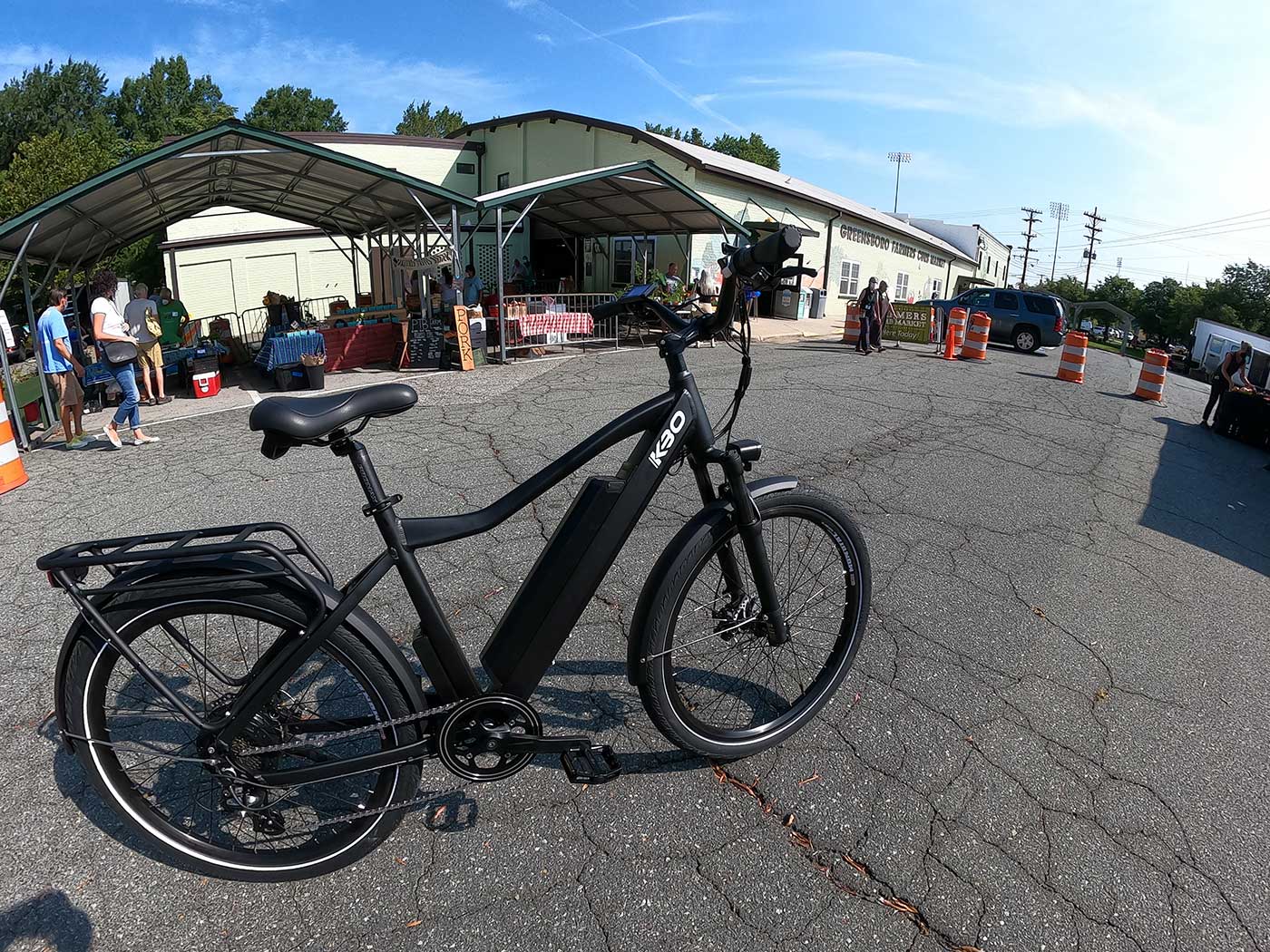 Just need something to get to the farmer’s market? Or work? School? Or leisurely cruising the neighborhood to get some exercise? The KBO Breeze will do it all and put a smile on your face.

The throttle motors you along up to 22mph, and I found that it’d haul me up most normal hills at about 13mph before ramping back up to its limit on the flats. 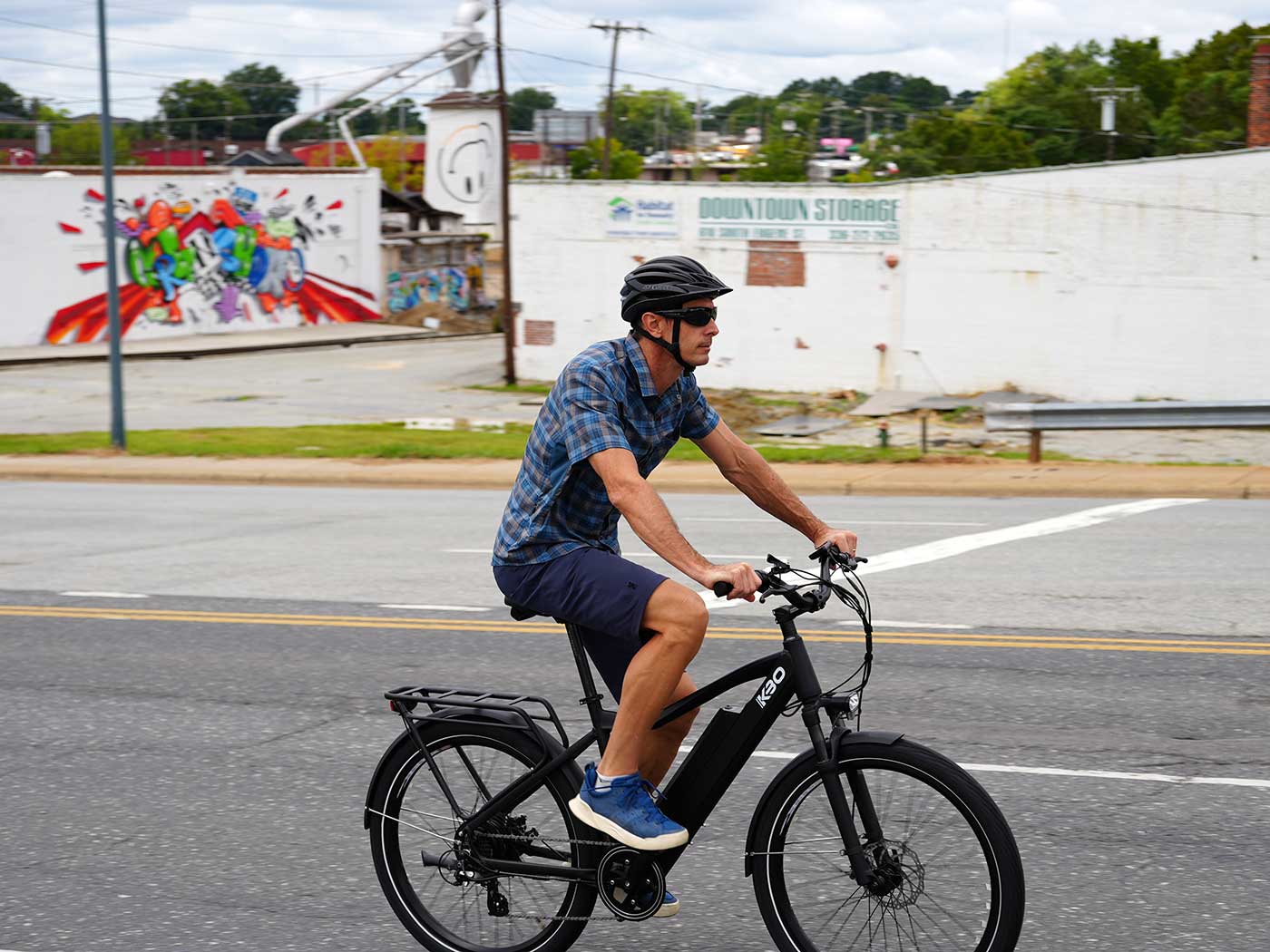 It had no trouble helping me up bridges and hills. And because of the way it delivers power, it jumped out ahead of the rest of us when the light turned green.

Bottom line: This bike surprised me. As a “cyclist” I could nitpick it apart, but also appreciate what they’ve accomplished at this price point. Not everything is going to be as smooth and durable as bikes costing 2x or more, but I applaud KBO for bringing a respectable package to those on a tight budget.

For someone wanting to ride around town quickly and easily, with the ability to add panniers, a basket, or even a child seat, the KBO Breeze is an easy recommendation.

I appreciate the well-rounded review, and your ability to consider this offering from multiple perspectives.

More like, Rad and KBO are branding the same open frame and drive systems from the same Chinese factories. Nothing new. Rad paints their logo on it, KBO does as well. Rad is a marketing machine, they do not make their own bikes or design their own drive systems nor own their own factories. You can say the same of many, many other bicycle brands, especially when it comes to Ebikes.

I’ve owned the KBO Breeze for three weeks. I agree with author. Riding this bike is fun and a joy to ride. I had to adjust the brakes and now they’re very efficient. Overall, you get a nice ebike for a fair price. I’ve added a rear view mirror, replaced a petal that didn’t rotate properly and replaced the saddle.

Sounds ok except that based on you description the front brake is not powerful enough. You say the brake won’t make the bike endo, that means it can’t put enough power down to slow you down quickly. On an e-bike a strong front brake is very important. I would look into upgrades possible on that front brake before considering this bike.