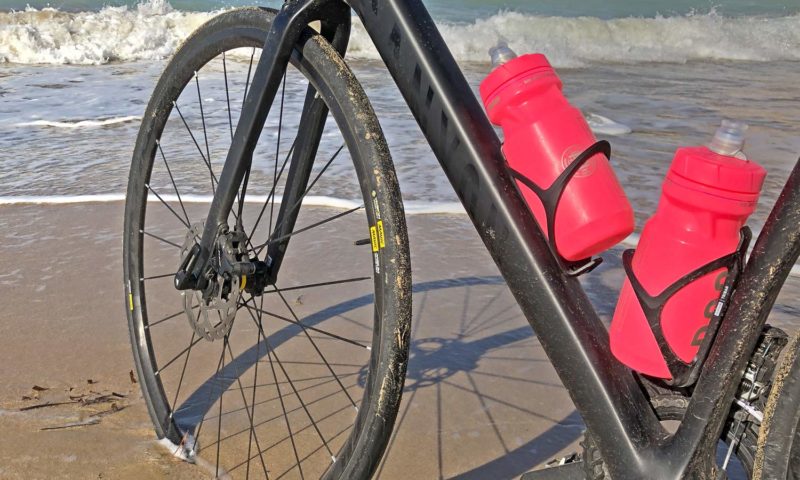 So, the vast majority of our reviews are for high-end bikes and the latest & greatest tech. That’s where most of the cycling industry’s development power & investment goes these days, so it’s often what we review to help readers make informed purchases. But it’s also nice to just stumble upon small, low-cost products that actually do the job just as well as more expensive options. These cheap, reinforced plastic Decathlon Triban bottle cages are just that… As mixed-surface all-road & gravel biking has become all the rage, we’ve needed to find more bottle cages that can securely hold a water bottle over varied terrain. Remember most gravel bikes now have at least three cage mounts, so buying $70 titanium Silca Sicuro or 80€ carbon Alpitude Superleggero cages just isn’t going to be in most people’s budget after dropping a lot of coin on a fancy new gravel bike in the first place. So enter the $8 / £4 / 6€ Decathlon Triban plastic bottle cage. (There’s a ton of exchange rate variance in there, but at this price point, so what?) Sure, this is a department store plastic bottle cage that is surely made in China. Some might even discount it as disposable. But when you need an extra cage in a pinch, and don’t want to spend a lot more cash, this thing delivers a lot of value, and holds your bottle securely. OK, real quick… this simple looped injection-molded plastic cage is made from 90% polyamide with 10% fiberglass mixed in for stiffness & overall strength. Decathlon claims it weighs 28g, exactly what each of my two cages weigh. That’s it – light, simple, cheap.

Riding review with the Triban cages So the reason I ended up using the Triban cages in the first place is a story as old as time. Borrowing a bike to ride with friends far away from home (shoutout to my homies at Rapha & the RCC), we realized my loaner Canyon Endurace was missing cages. Not wanting to spend a bunch of money when we all have plenty of fancy cages at home (and with local bike shops closed for the evening, anyway), a quick trip to the local big box store returned with two cages for a total of 12€. To my surprise, they ended up being about the most secure cage I’ve ever used, paired with RCC Camelbak Podium bottles. Four days and over twelve hours of actual riding away from home over a mix of smooth tarmac, rain-soaked & sandy roads, slick dirt trails, even brutally rough gravel left over by the Spanish army, and never once did a bottle move in the cages. In fact, once they got a bit of wet sandy grit from riding in the rain, it became difficult to actually extract the bottle while riding. (On mostly dry rides, they were completely easy-to-use, but still with a secure feel.)

The majority of my riding on this trip was on good roads, but let’s just say I get ‘creative’ with my line choice some times. Now that I’m back home, I brought the new cages with me, and they are going on my jack-of-all-trades Bombtrack Audax to ferry bottles for me over road & trail. I would never have thought to go to Decathlon at home to buy a couple of cheap cages. But having circumstances push me to riding with them, it’s hard to overestimate undersell?) the value they present. Really only the absolute most premium cages are going to be lighter. (That Superleggero is lighter but won’t hold your bottle over cobbles, the Sicuro is heavier and only almost as secure. Plus, only 1 of 5 “awesome carbon fiber water bottle cages” we shared a few years ago was measurably lighter.)

So, if you break a more expensive cage, or just need one or two extra for a second bike, these Tribans are really hard to argue with based on how affordable & secure they are! Discuss…

I use these cages on all my bikes, from trail to gravel and commute. Would definitely have used one on a downhill rig if I had owned one. They will survive everything you can throw at them. They totally do the job they are meant to do, and yes, adding grit only makes them hold bottles better.

I’ve had zero problems over the past couple of years with the $6 CatEye BC-100.

This is not a new design. Profile Design uses it for their Vise Kage and I’ve seen other brands with their own label on it as well. I do agree though that it is an affordable cage that just works.

I have this same cage on one of my MTBs but from the brand 49North. With a camelback podium bottle it is nearly impossible to get the bottle out with one hand, which is fine for MTB, but for road or gravel they are useless. Maybe some bottles are able to exit without so much trouble, but from my experience I can’t say these are a good choice for drinking while moving. Good choice for under downtube bottle mounts though.

Yes faced the same issue with the podium bottle

My all time favourite is Elite Vico Carbon, in second place – old good Custom Race. The first one holds the bottle really hard (even enduro ride can’t make it fall out) and is really cheap (for a carbon cage). The latter – it works just as good and the price is good.

And most of all – plenty of colour combinations to choose from. 🙂

plenty of color from decathlon too

when i don’t need a side loader cage i use those, they are perfect. But decathlon isn’t exactly “department store quality product”. Sure it’s usually very well priced but they are specialized in sports and spend a lot of R-D making the right products for the right people. The road bikes are great and the mtbs have hitorically been too conservative to my taste but they look to be on the right path at the moment with the new products.

Decathlon make an equally good ‘side-loading’ cage that can be configured to a right- or left-handed set up.

Looks like the old Trek Bat Cage… no one should buy ti or carbon cages… these cages are all that should exist. I run the old Bat Cages. If you pay more than $20 for a cage you are a wanker.