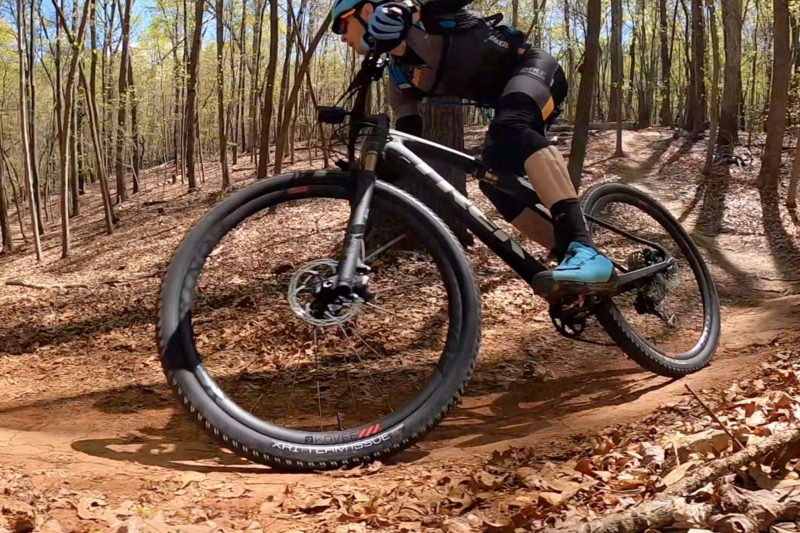 The Trek Supercaliber stole the show with it’s ultra sleek looks and unique IsoStrut shock design, but how does it ride? We put it through the paces on our local cross country trails to see just how fast it really is.

And then we took it back to the lab to take apart that rear shock assembly and see how it really works on the inside. Check out this video for a full look at how it performs on the trail, and for the complete IsoStrut tear down!

Fun Fact: The frame design is the same across all models, using the same level of OCLV carbon. So, even if you start with the SRAM GX-equipped 9.7 model for about $4,800, you’re getting the same exact frame as the $10,000 model at the top end of the catalog.

One thing we just learned from Trek is that they use a size-specific layup for each frame size, and each one has a completely unique rear end because the seatstay flex characteristics had to be tuned specifically for each size. 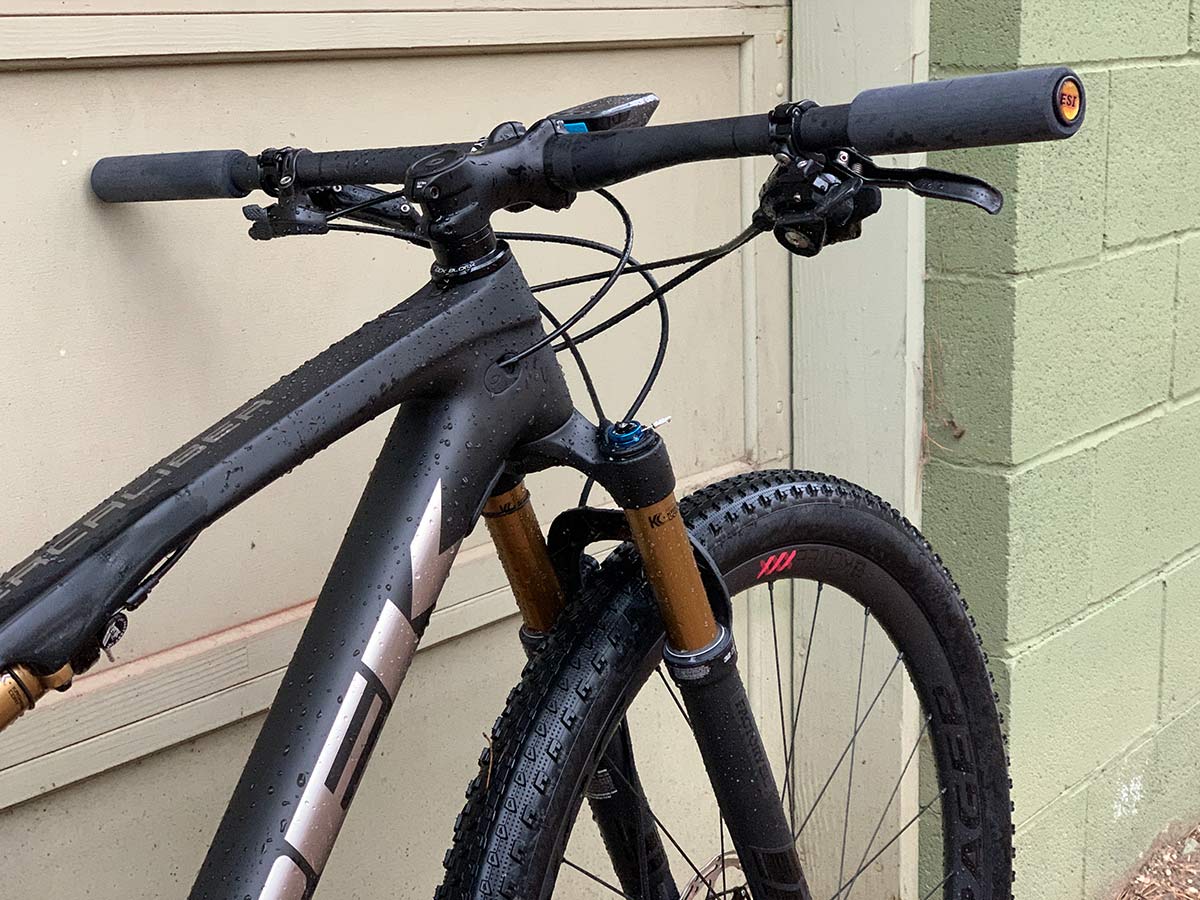 Most Supercaliber models get a flat bar with negative rise stem for a very low, aggressive rider position. They’re also narrow, just 720mm, which gave the bike a borderline twitchy feel the first time I hopped on it…but I easily adapted to it. 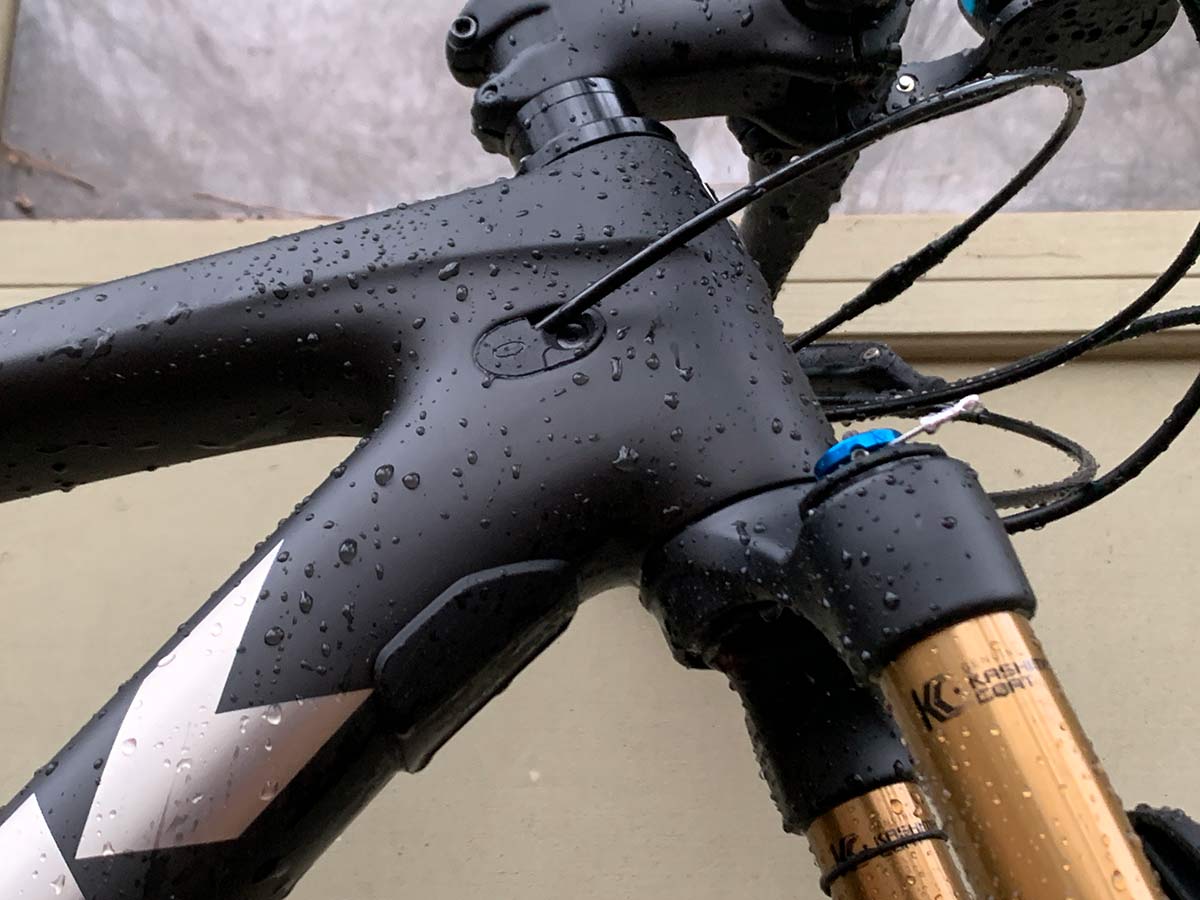 A Knock Block headset limits steering range and prevents the fork’s crown from hitting the downtube. Rubber bumpers are there as a backup, but you’re unlikely to make contact with them unless things go seriously sideways.

Cable management comes from bolt-on ports and a small zip-tie port midway down the downtube to cinch everything tight inside the frame. 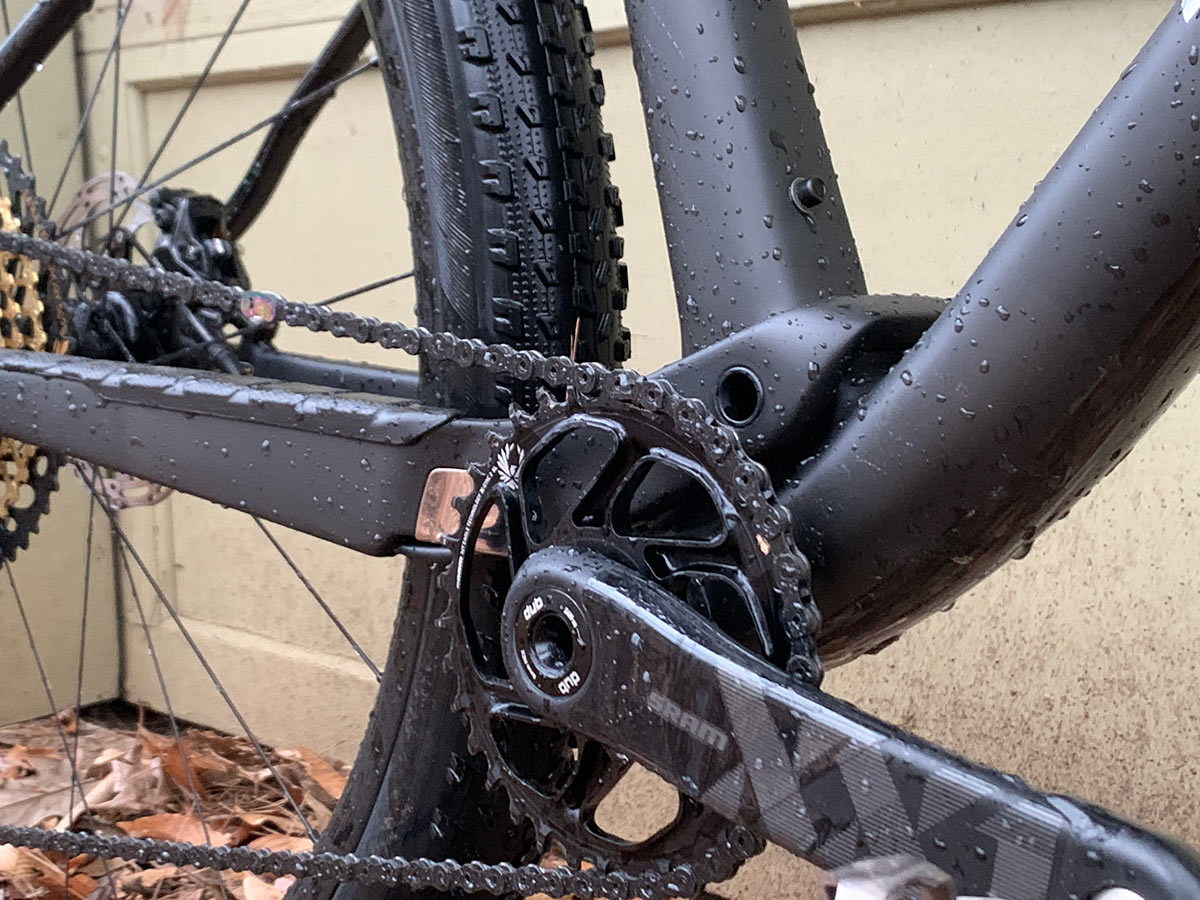 The rear triangle is one single piece, which saves weight and improves lateral rigidity. The chainstays aren’t huge, and the seatstays are designed to flex, but it tracks true and corners sharply.

The intentional flex is what lets them get away with no pivots at the shock mount or dropout. In fact, that flex accounts for about 5mm of the bike’s 60mm total rear wheel travel. 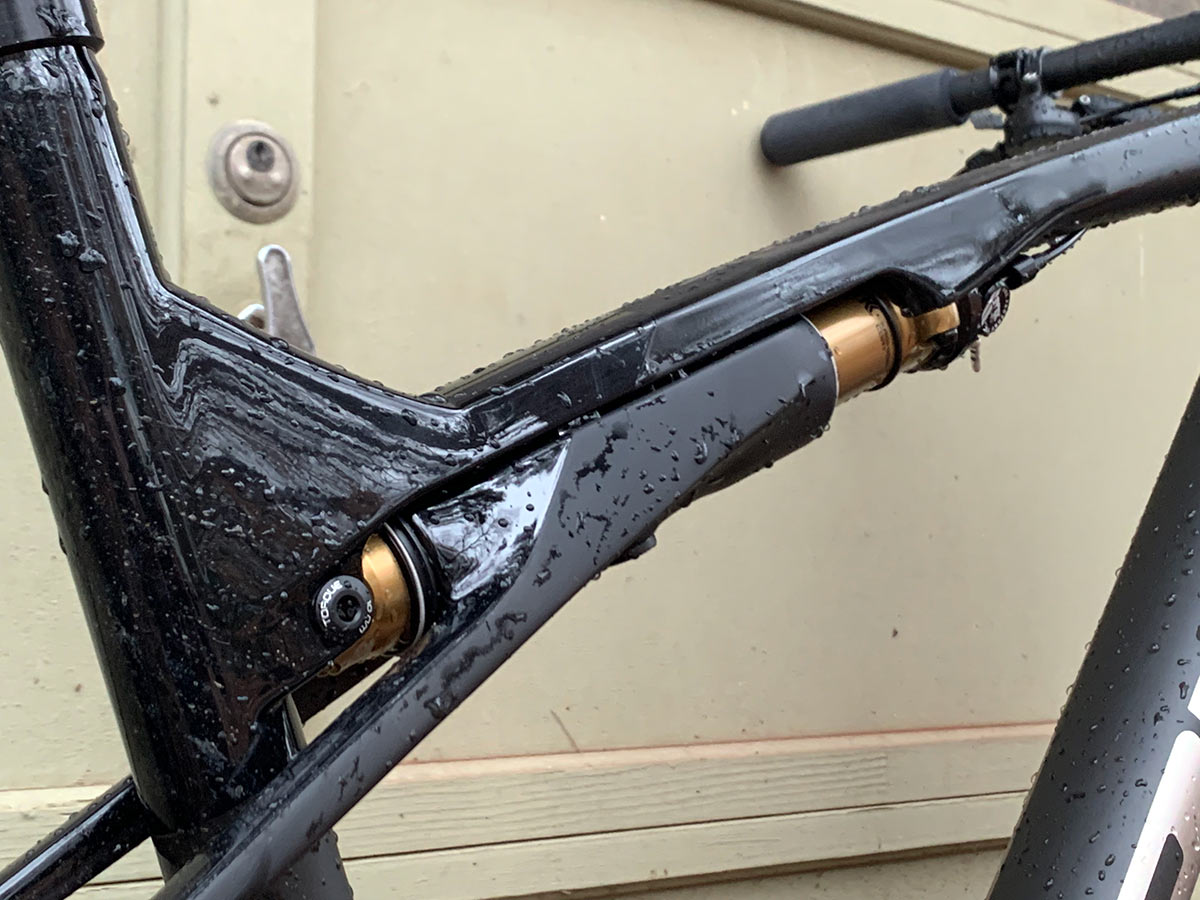 The real attention grabber is the IsoStrut rear shock, co-developed with Fox. It streamlines the bike’s appearance, making it (IMO) one of the best looking mountain bikes ever. It’s a beautiful thing, the slight curvature of the top tube adding just the right visual flow to send the eyes straight down the seat tubes. Gorgeous. I mean, just look at it: 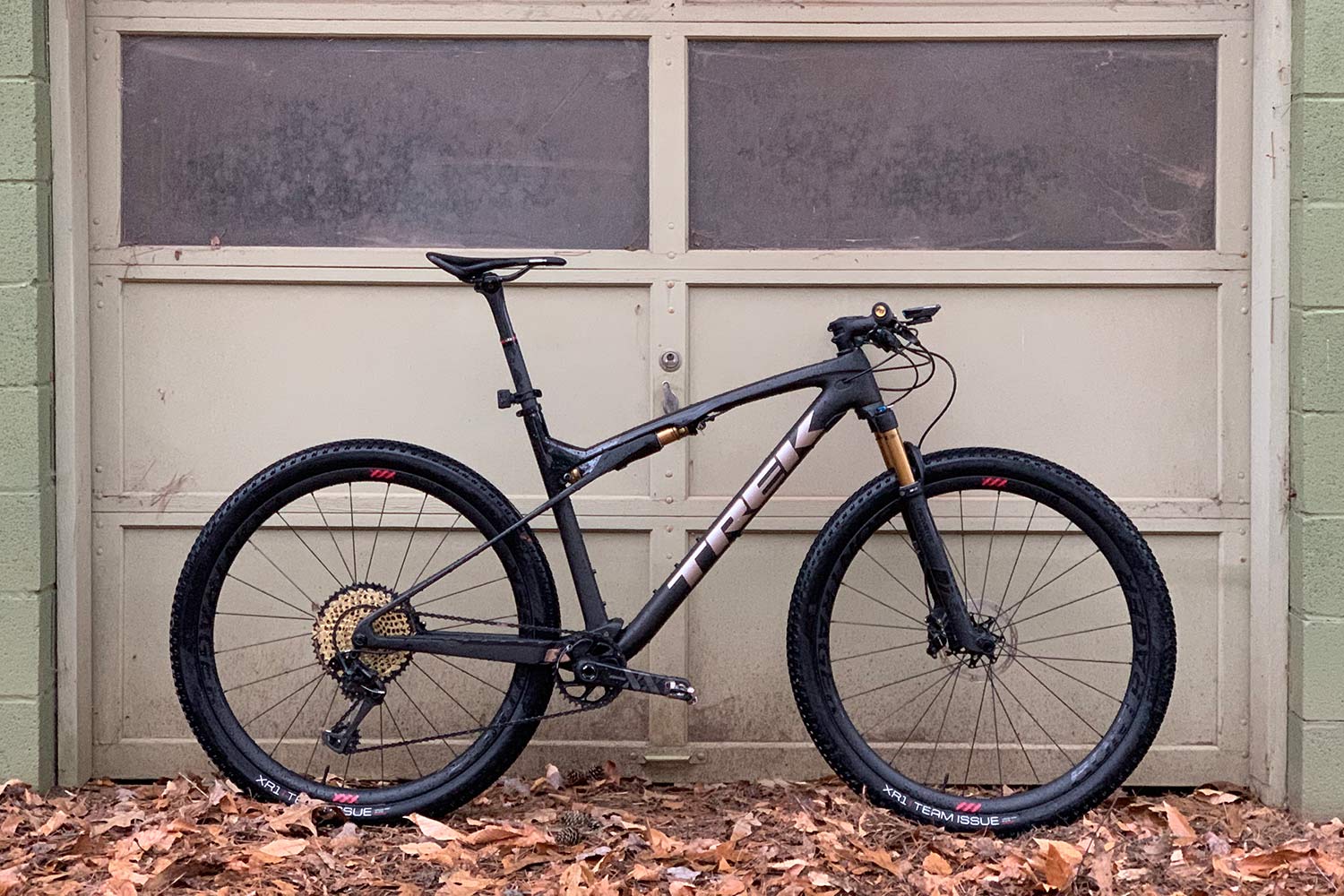 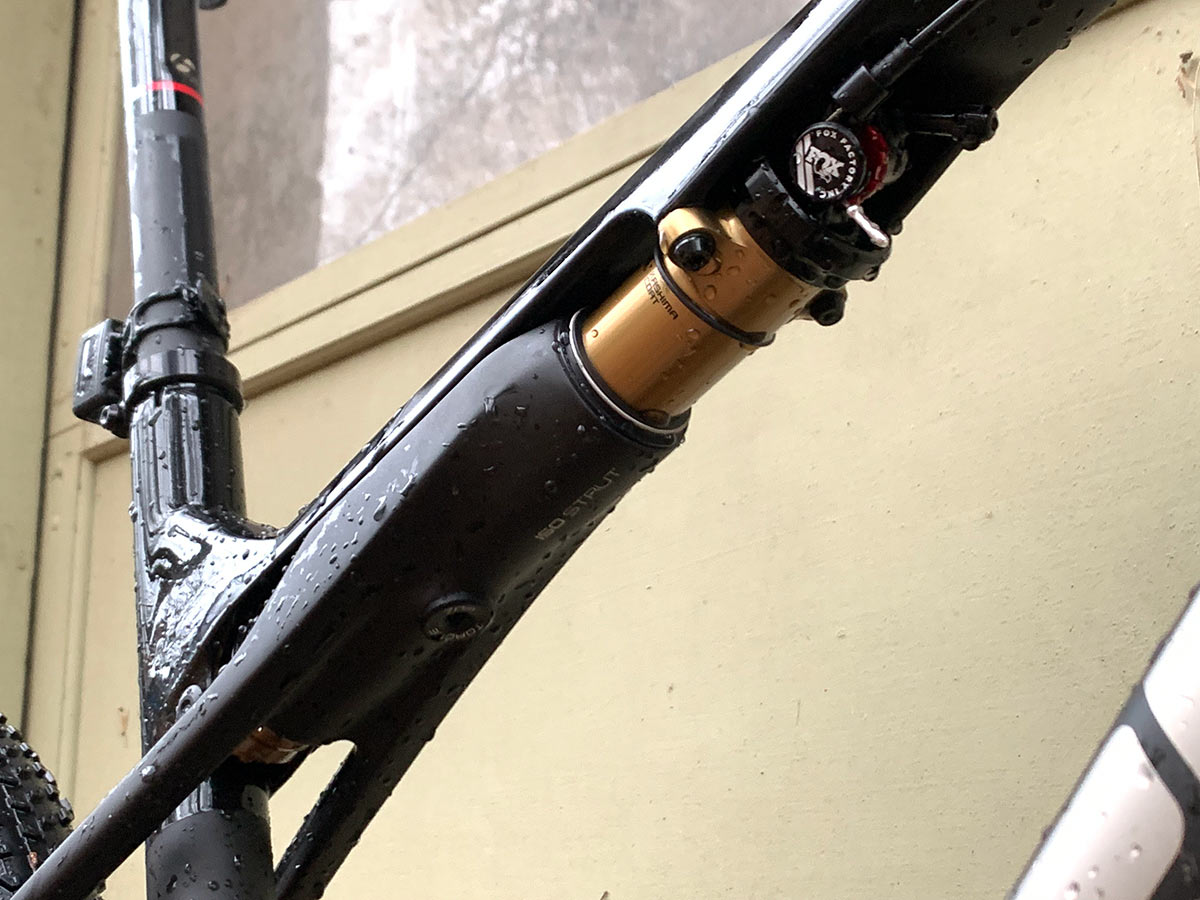 Underneath is clean, too, with few spots to gather mud. As you’ll see in a sec, this isn’t something you want to have to pull apart to clean very often, so it’s nice to see that things are well sealed and easy to clean. 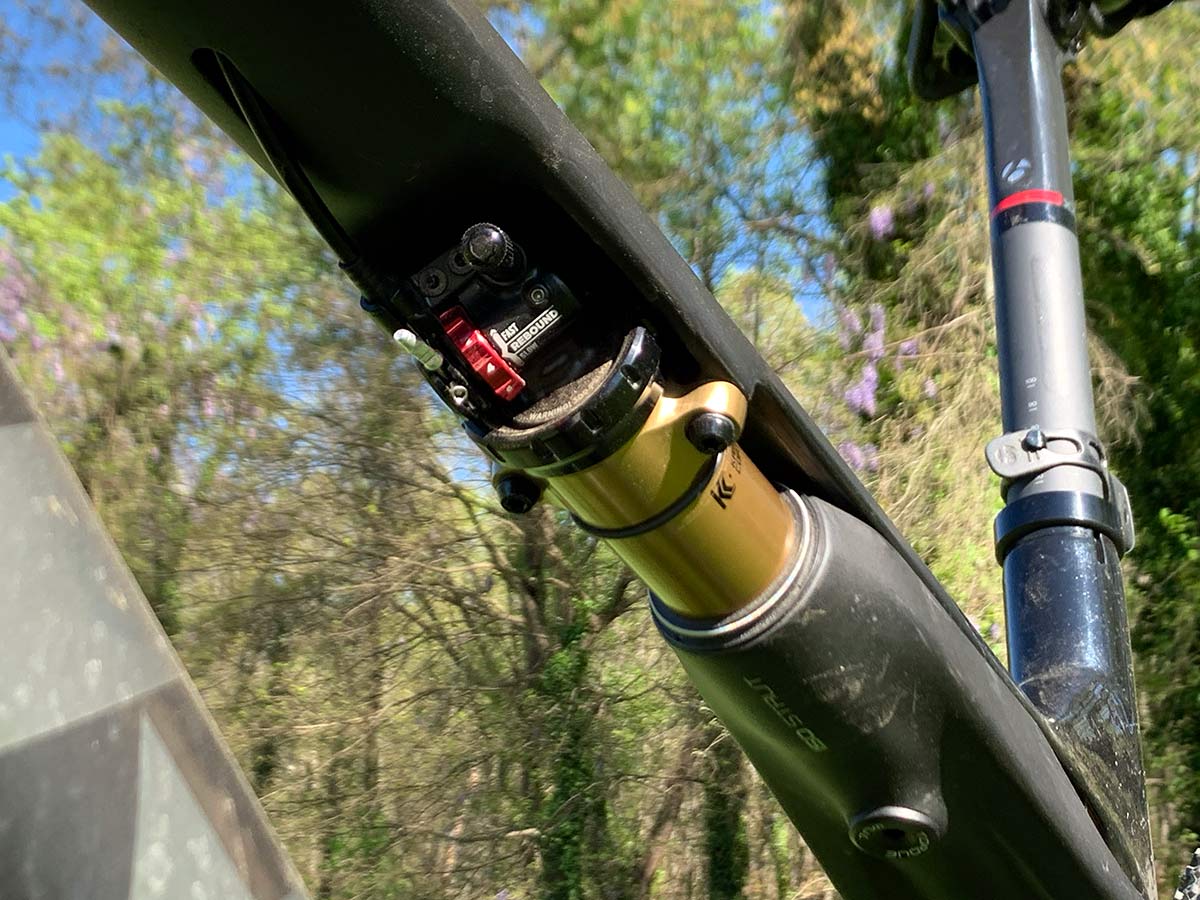 Rebound adjustment and air pressure changes are easily accessed from the bottom.

The bike has two bottle cage mounts, and that’s about it. No dropper seatpost, but they do say you can run a 120mm fork on it if you want.

The bikes are sold with 100mm forks, and,  really, that’s what it’s made for…my hunch is a 120mm up front would create an unbalanced feeling and get me into trouble trying to bash through things up front, only to have the rear bottom out.

Set up the way I liked it, I could bottom the rear shock on bigger landings, but otherwise it kept the bike well supported and floating around the middle of its travel over normal bumps and stuff (you can see this closeup in the video). 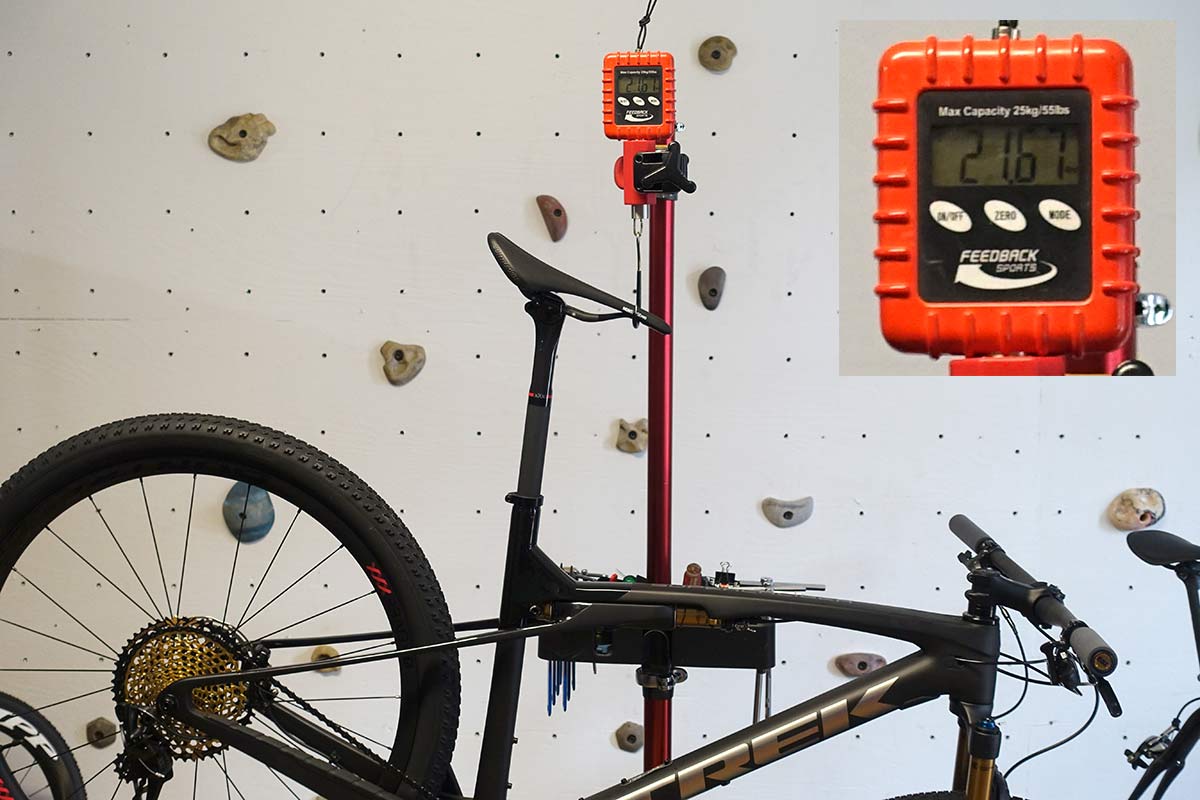 How does the Trek IsoStrut rear shock work? 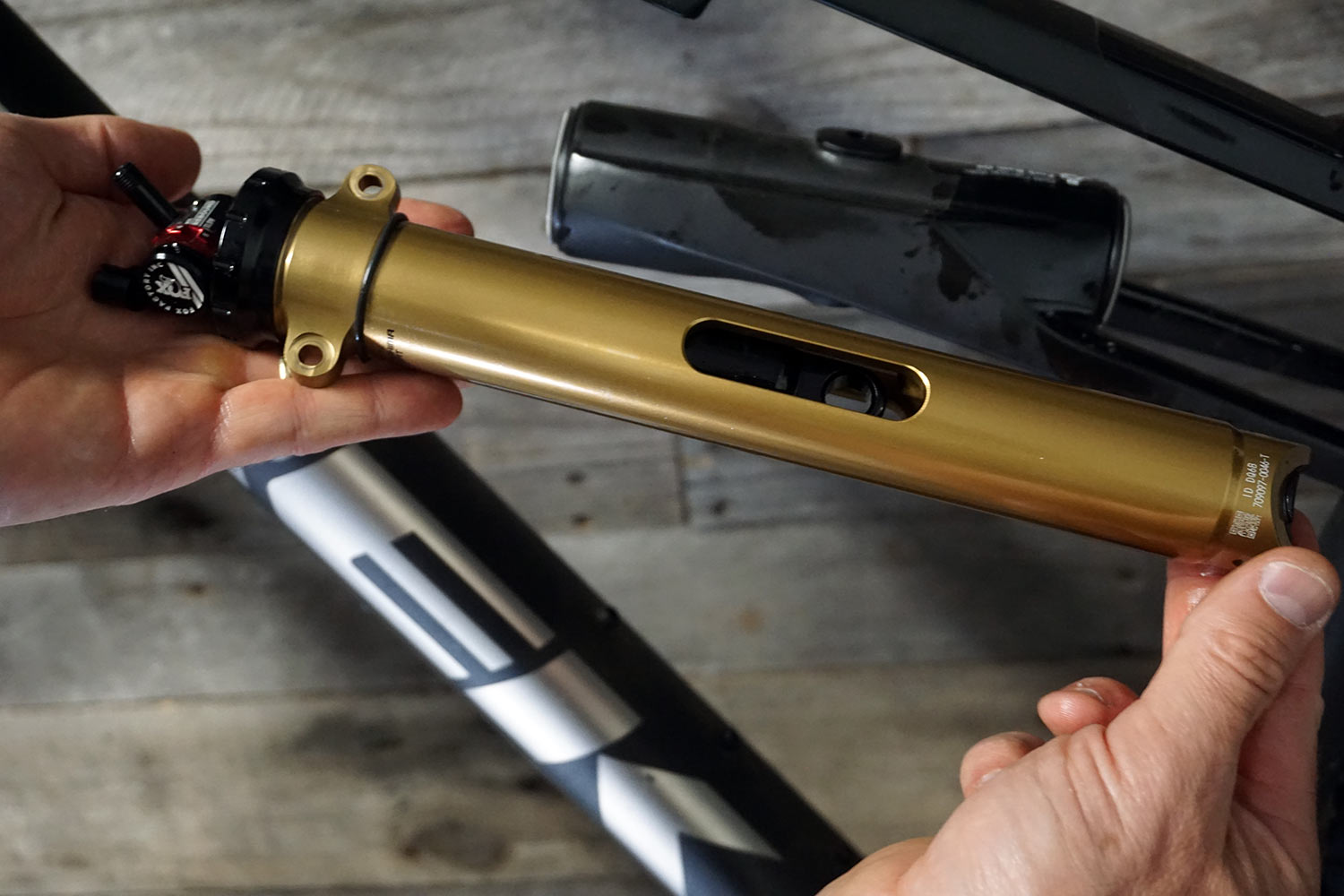 That’s the real question: What’s inside the IsoStrut and how does it work? Basically, the seatstays meet at a carbon fiber sleeve that wraps around a Kashima-coated stanchion. A standard rear shock sits inside that stanchion.

You can see the shock’s lower eyelet through the slot in the Kashima-coated stanchion.

The stanchion is bolted onto the frame and doesn’t move. The carbon sleeve slides forward and backward on the stanchion, and a bolt attaches it to the shock’s lower eyelet.

The bolt has two square glide bushings that keep the sleeve sliding straight. As you hit a bump, the rear wheel moves up, transmitting that force through the seatstays and pushing the carbon sleeve forward. Since it’s bolted into the shock, that forward motion compresses the air shock. 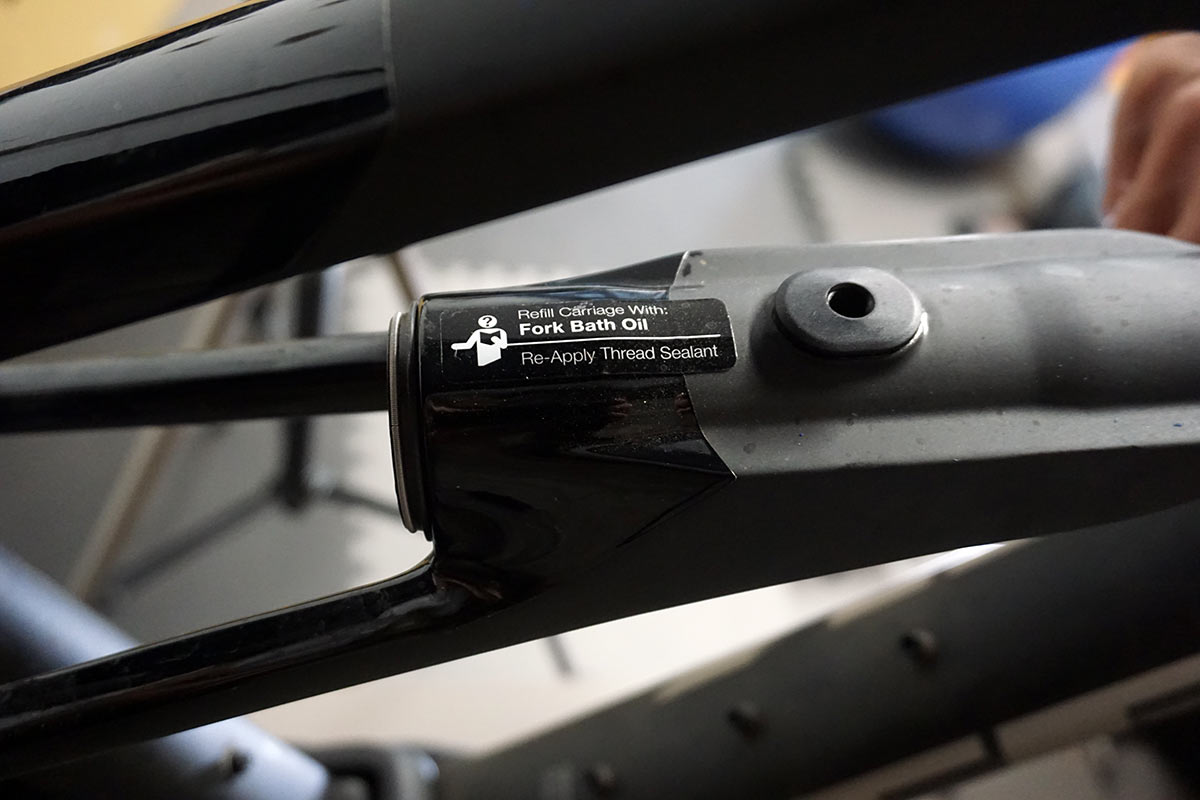 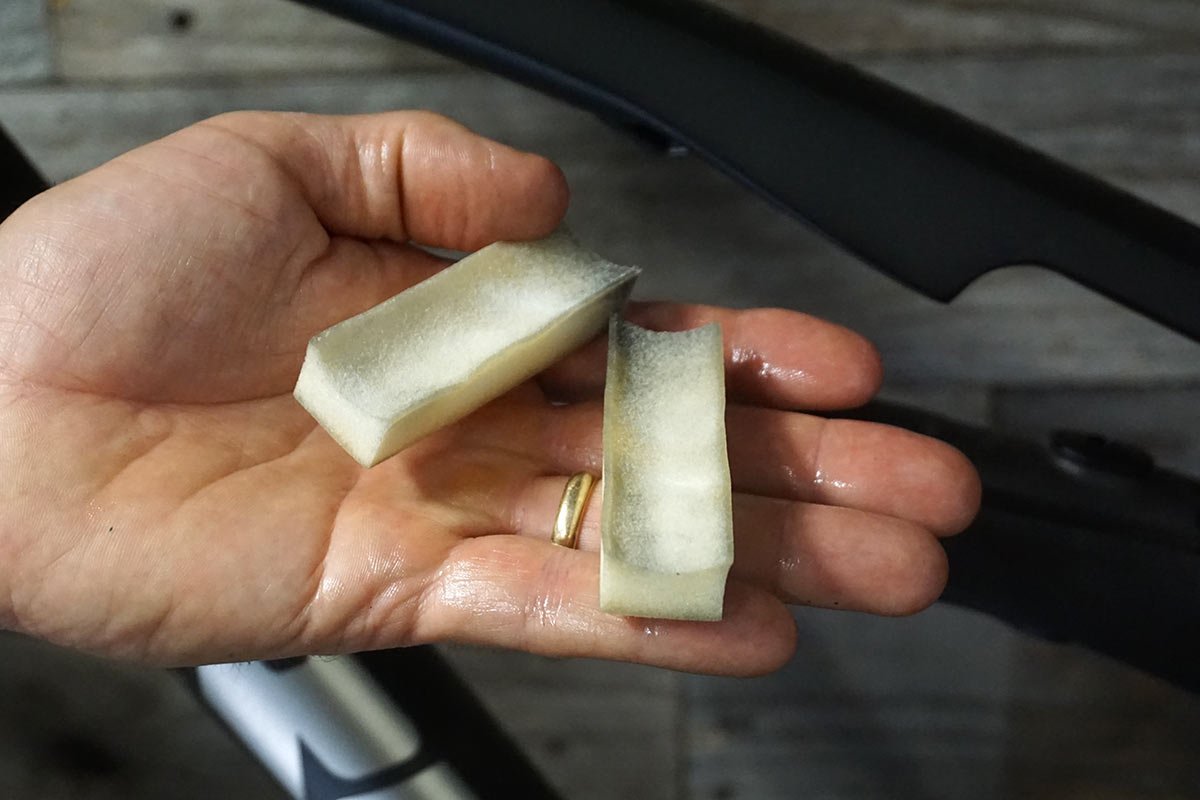 There are two foam inserts inside the carbon sleeve, between it and the stanchion. They’re soaked in suspension fork oil and keep everything lubricated and sliding smoothly.

They work great, until it’s time to reinstall everything. I’m sure there’s a method (or an art) to it, but every time I’d reinsert the stanchion, it would push these right back out. Fortunately, I did this teardown at the end of my review, because I sent these home in a baggy with an apology letter to Trek’s team. Sorry, but they Humpty Dumpty’d me. 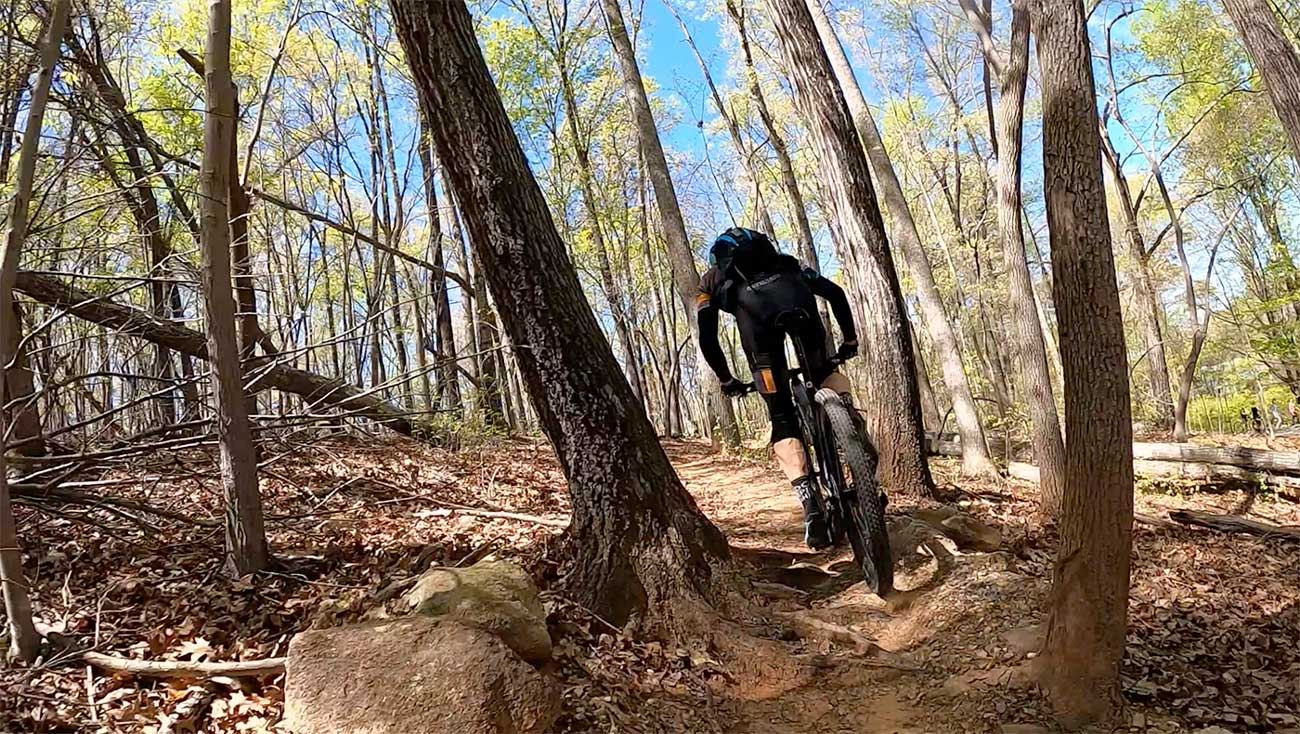 No matter how much rougher World Cup XC courses get, races are still won on the climbs. So we’ll start there.

The Trek Supercaliber climbs like a goat. A very fast goat. Maybe, a goat on speed and triple espressos. The goal with any suspension is to improve traction, but that’s especially the case for XC bikes where riders can’t afford to slip on the inclines or the declines. 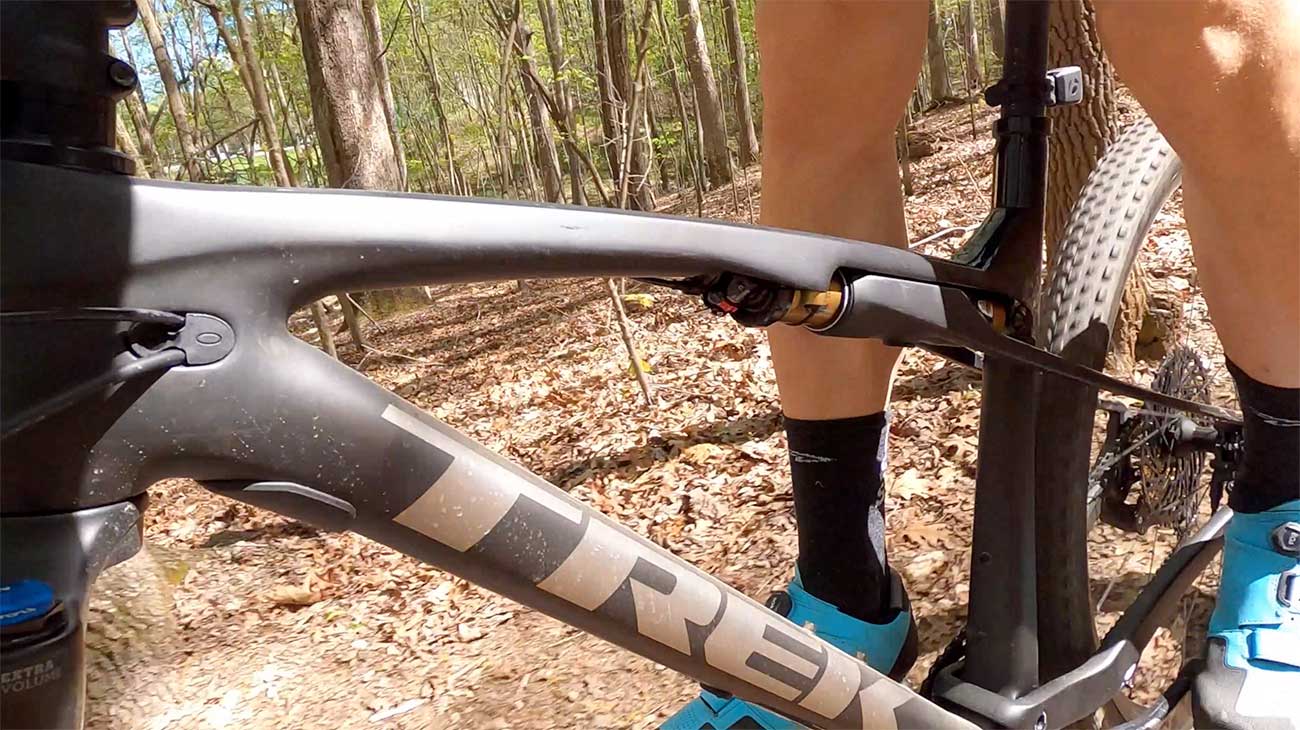 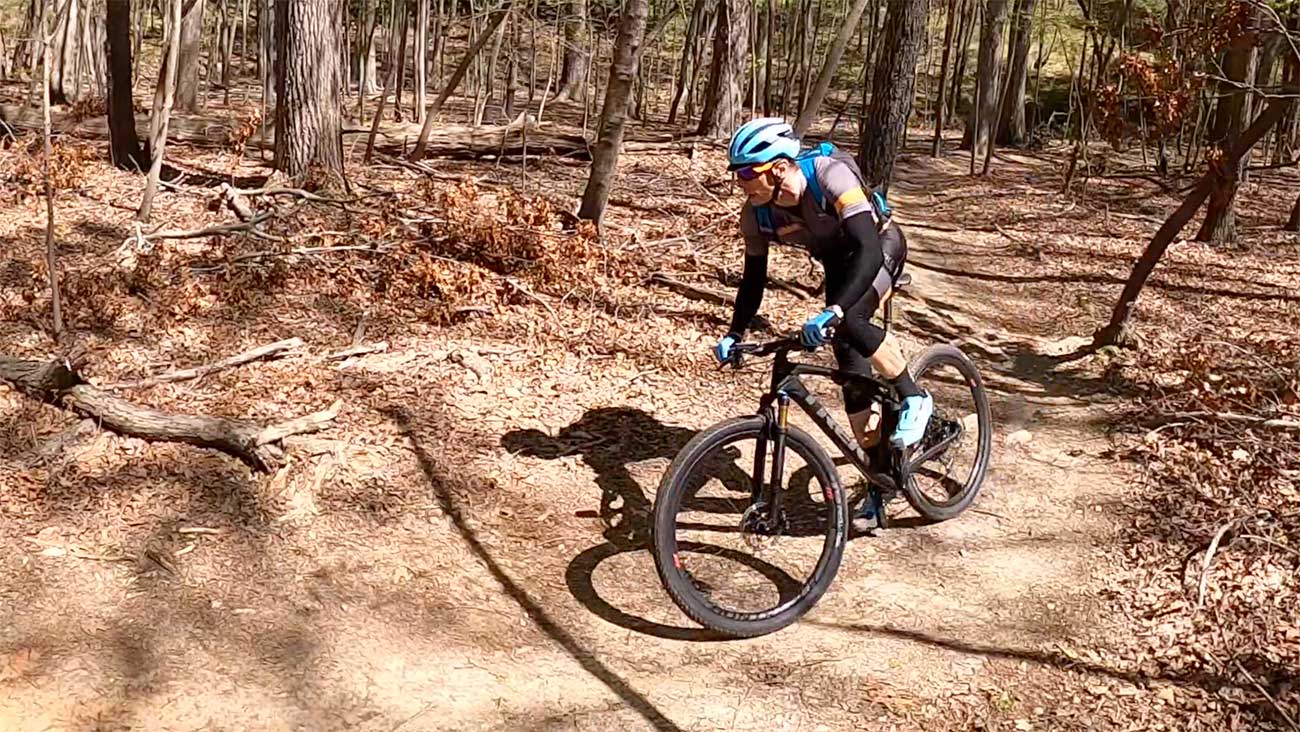 It wasn’t just the suspension that did that. It was the tight, narrow, stiff build that let me slice around the trees a little closer. Carve lines a little tighter. All the little things that shave a fraction of a second off here and there.

Those things add up to full seconds and podium spots. The things that make other riders wonder how you’re able to keep inching away from them, forcing them to work harder on the climbs to catch back up. 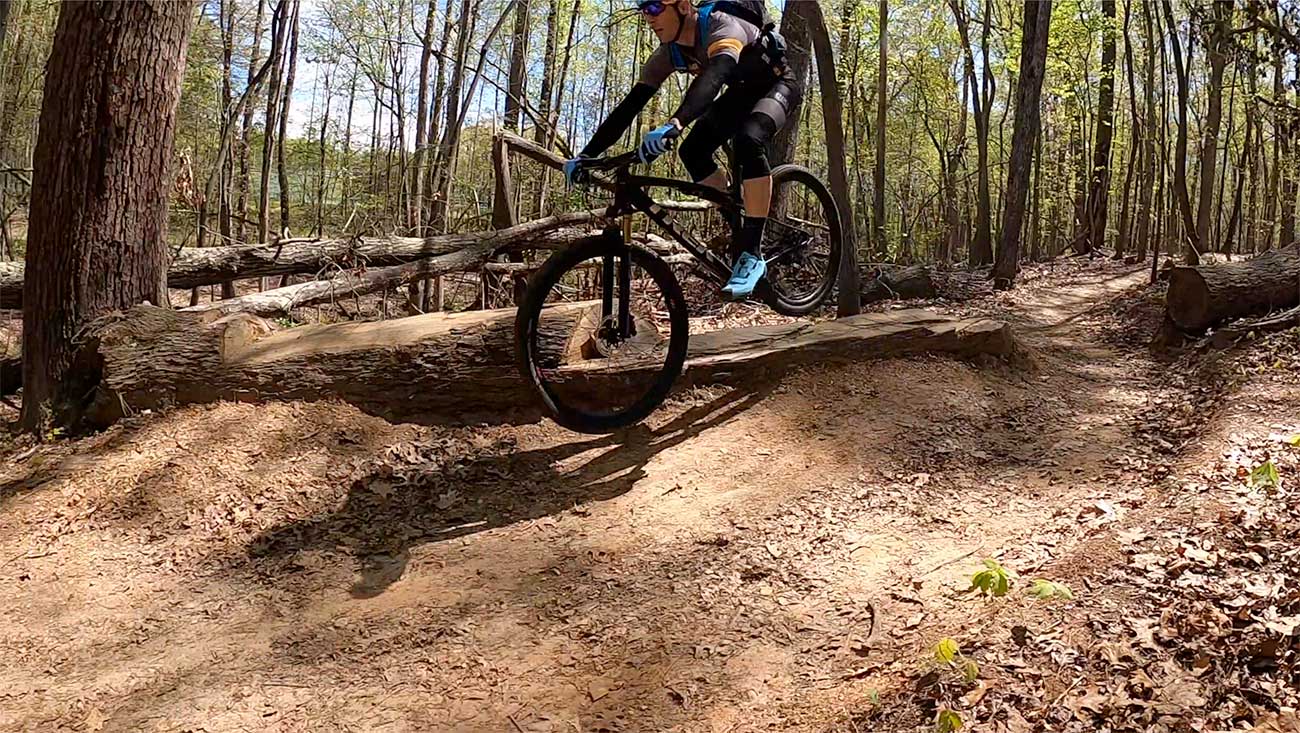 With more and more “cross country” bikes taking aim at the “light trail” category, it’s refreshing to see a bike take a singular focus and get after it. The Supercaliber is a race bike, and that’s it.

It’s not the bike I’d take on all-day outings with friends, but it would be my choice for any race with “XC” in the title, and many with “Epic”, too. Maybe not the TranSylvania Epic, but Samarathon and True Grit? Heck yeah.

Basically, the Trek Supercaliber is what you wish your XC race hardtail was about 30 minutes into any race. The suspension makes it faster without weighing it down, and it makes a “race bike” way, waaaay more fun.

Those long slender seat stays scare me. This begs the question? What is Trek’s warranty on this frame, and how hard will be to get the shock serviced in the future?

While the stanchion bit is proprietary, the internal shock is apparently based very closely on the Fox design. They made it so anyone who can work on a Fox shock can work on this.

I don’t even need to read the article to know what it will say.

This is the best XC bike, so amazing. cant give the trek engineers enough credit. they knocked it out of the park. Blah Blah Blah, stroke, stroke ,stroke.

LOL, well maybe if you leave out the part where Tyler broke the bike while taking it a part to see how it worked.

I prefer this style of review over the “princess and the pea” style that always result in wanting longer, slacker, lower, and more tire.

I thought I was the only one who want shorter, steeper, higher and less tire. glad to see I am not alone.

Jeff, after you read the article, you should read our revenue disclaimer, too. It’s good stuff. Cheers.

I’ve always been an XCM racer, so TIFWIW, but this is what I wish my hardtail had been during the one season I raced it.

What does that mean. Cop bikes. Are you saying you won’t buy a bike from a company that sells bikes to police forces?

Yes. Thanks for asking.

Yeah, I’m not sure I agree with that. Bicycles for cops gets them out of cars. It makes the officer more approachable, helps them become engaged with the community. Id rather cops buy bikes than tactical weapons.

The warranty is lifetime on the front and rear triangle. Full disclosure: I own one. I race a 9.9 XX1 in 6 hour races. I can verify the seat stays are really strong and flexing is what they’re designed purposely to do. When you ride this bike it’s like you’re cheating it’s so fast.