Also joining NAHBS from the international community is new builder Alex Clauss of Portus Cycles in Germany. After building his first frame at The Bicycle Institute in the UK – a fillet brazed steel frame to be donated to those in need – Alex Clauss caught the frame building bug. Now welding rather than fillet brazing, Alex is making his NAHBS debut with an ambitious full-suspension steel frame that’s bound to turn heads. BIKERUMOR: Why did you first decide to build your first bike?

ALEX: By the end of 2012 I was hungry to do the last step – after designing lot’s of bicycle parts like hubs, stems, and cranks for my former employers Tune and Acros. For me the frame is the heart of bicycle, which has its own character by choosing a specific tubeset, geometry, and special details with a final paint job. I didn’t build my first frame for myself though, cause it was a frame which was to get donated. Probably you’ve heard about The Bicycle Academy in the UK. They started, after one of the most successful crowdfunding campaigns ever in the UK, a frame building school with a course where you build a fillet brazed frame in five days completely by hand from scratch. 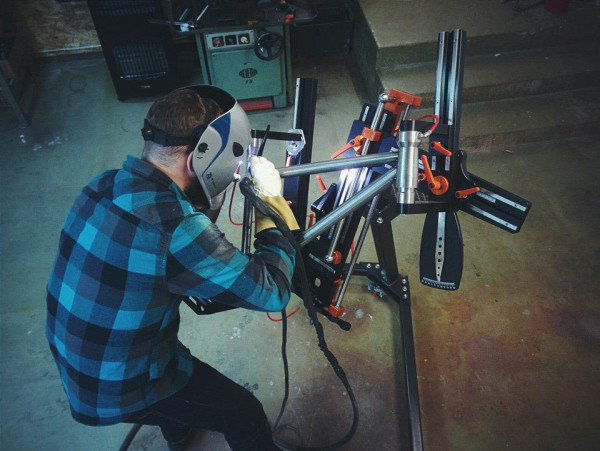 The result was a frame based on the WBR Buffalo Bike. It’s a cargo bike which you finally have to donate to a person who really needs it. That’s the deal, and I really love this idea! These five days in the beginning of 2013 really blew my mind, and many different pieces of my life and skills resulted in one picture. The picture of becoming a frame builder, because I love handmade, engineering, and people. ALEX: When I’m passing all the steps from the process of building a bicycle (frame) from scratch. Starting with measuring a person, building the frame according to the physical needs, assembling it with the wished parts, riding finally on the trail, and getting an absolute direct positive feedback from the customer. ALEX: A full suspension trail bike with lots of details according to my personal background. The system itself is the “steel brother” of the ICB2.0 by Alutech and crowd, which Bikerumor already wrote an article about, back after Eurobike.

We offer this bike with the same suspension system kinematics, but with a lot of extra customization options like stack, reach, head tube angle, chainstay length, etc. All then 100% made in Germany. You can take a look at the bike in it’s natural environment in the following short video:

ALEX: You really need a to be able to hold your breath and a lot of patiences in the beginning. Which means your passion for the material and craft must be powerful, and you need a strong will to get things done, as almost every new step consumes so much time at the beginning. The proverb “practice makes perfect” is definitely right. The progress increasing in speed and quality is awesome when you start to make small batch production. For this reason, from time to time I really enjoy some contract jobs to hone my skills by doing a special movement ten times instead of just one or two times for a one-off project.