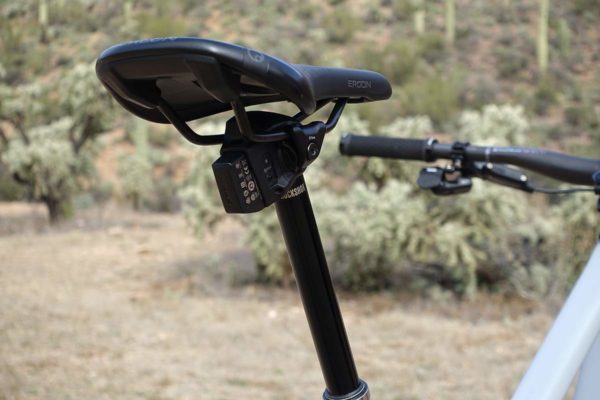 The new Rockshox Reverb AXS is more than just a dropper seatpost modified to operate wirelessly. Inside are new parts and designs to make it more reliable, easier to service at home, and some insanely fast electronics to make it perhaps the quickest, most responsive post ever. No more wires, hoses or cables, this baby is ready to get down.

The goal wasn’t just to make it wireless. It was to make it easier to use. The electronic lever offers none of the physical resistance of a cable actuated system, is far more ergonomic than the original hydraulic push-button remote, and way, way easier to install. But they knew it had to perform above and beyond expectations to justify the effort…and the cost. Here’s how they did it…

What’s inside the new Reverb AXS? 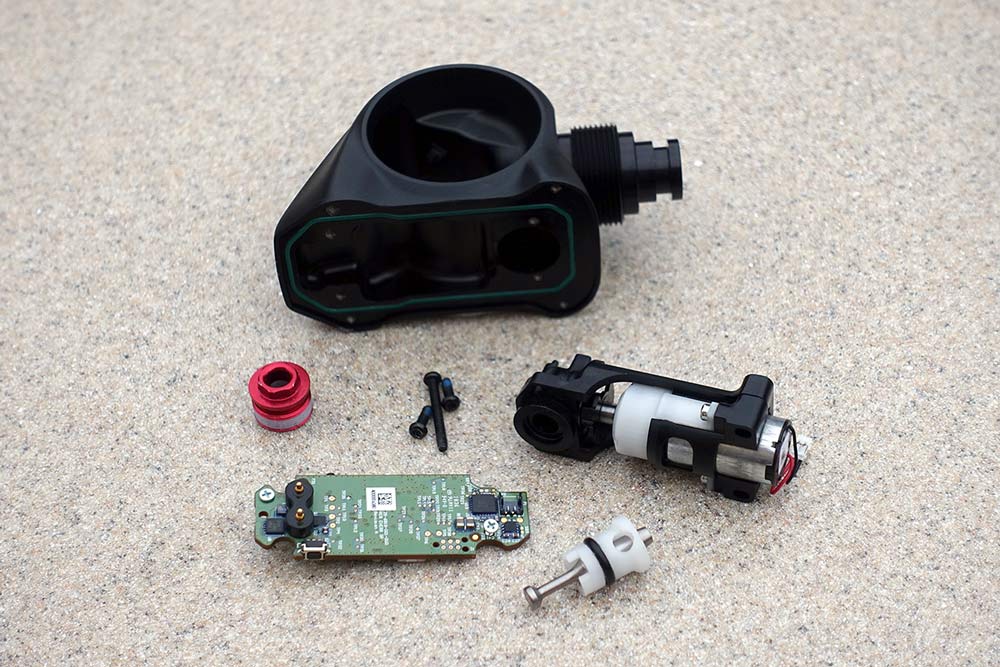 At the top of the post is the control unit, battery and valving. That’s the reverse of their Stealth posts, which put the valve at the bottom. That was the easy part, so we’ll start there. SRAM’s Reverb PM told us adding a gear box, motor and battery made it more complex, but it made it work better.

The system works by using an overly powerful motor to turn an oblong disc that sits over the release valve. When you’re sitting on the post, your body weight is putting pressure on the oil inside the piston, but that oblong disc is holding the valve closed. Hit the switch on the remote and the motor turns the disc such that it gives the valve room to move. If you’re sitting on the post when you do that, it’s going to drop as oil flows from the main chamber into its reservoir.

Release the switch and the disc instantly rotates back and pushes the valve closed, locking the post into place. It all happens extremely quickly…faster than you’ll be able to notice, and faster feeling than any mechanically operated post.

So, yes, you still have to put weight on the post to drop it…it’s not a remote control post, just remote actuated.

It’s almost as fast to service it, too 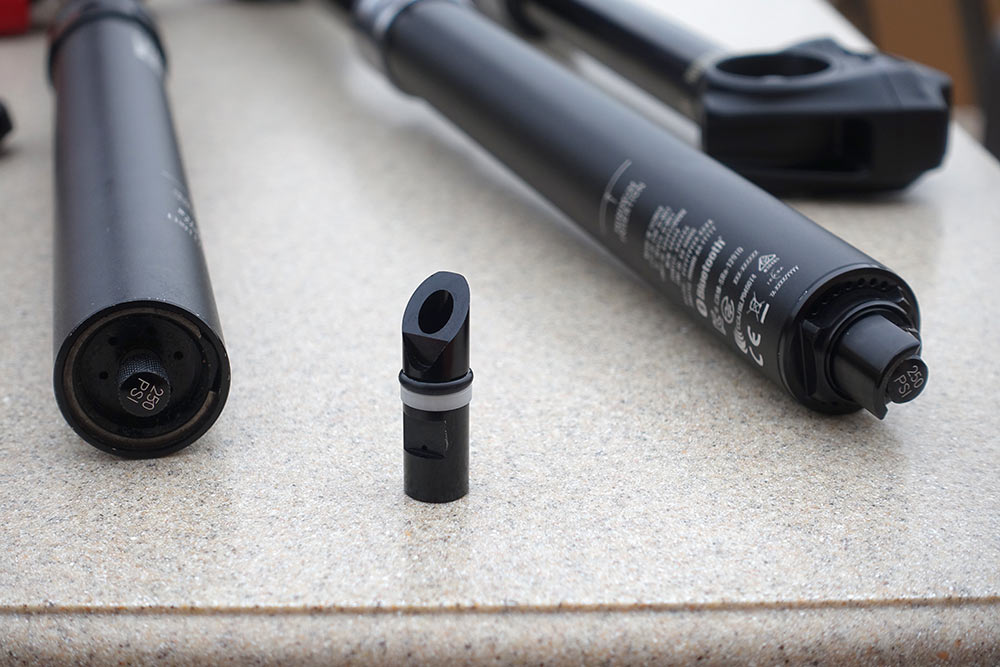 The main functionality is still an air spring pushing against an oil piston. It still uses an IFP (Internal Floating Piston) to separate the air and the oil, but should they ever mix, there’s a tool that lets you compress the post completely to reset it. And boom, you just serviced your post and it’s back to riding. The tricky part with that was figuring out how to make it user serviceable. And then even trickier was how to manufacture it. 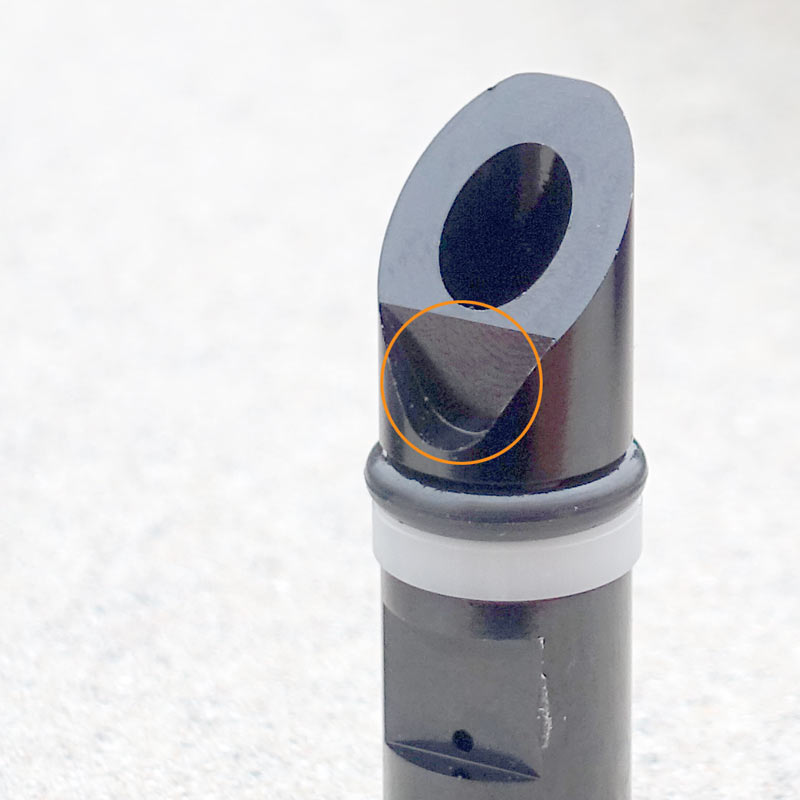 Shown above is the new Vent Valve bleed port. No, not the big hole at the top of the little hole at the bottom. It’s the microscopic hole you can’t see on that flat face (inside the orange circle). It’s virtually impossible to see, but it’s large enough to let any air escape out of the oil chamber. Once the air is out and oil hits it, it effectively stops compressing because oil won’t fit through that hole. Brilliant in its simplicity, but apparently devilishly hard to manufacture! 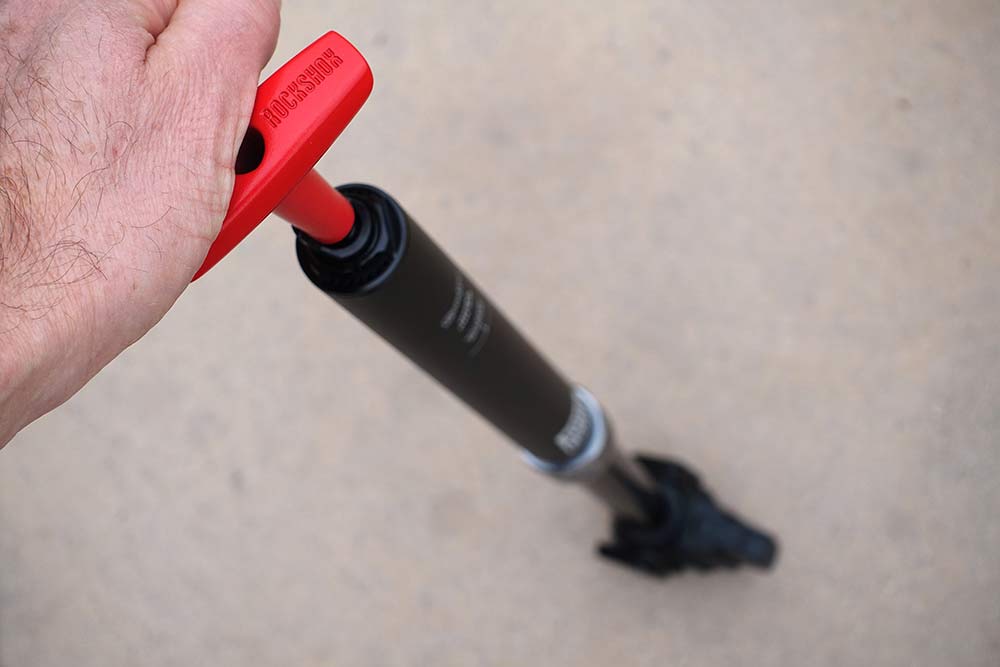 So, in the event your new Reverb starts feeling squishy because a little air finally worked its way into the oil, all you need to do is pull it out of the bike, press the included T-handle tool onto the bottom (over the air valve cap), and push down real hard. This depresses the Vent Valve, opening access to that tiny air port (it’s otherwise blocked to avoid giving air an easy path into the oil). Inverting the post gets the oil to the “top” of the oil chamber so it will escape through that tiny hole. When you can’t pretty down any further, that means all the air is gone and your Reverb is back to new. Stick it back on the bike, hit the button to raise it up to starting position, and go ride.

Improved usability all around 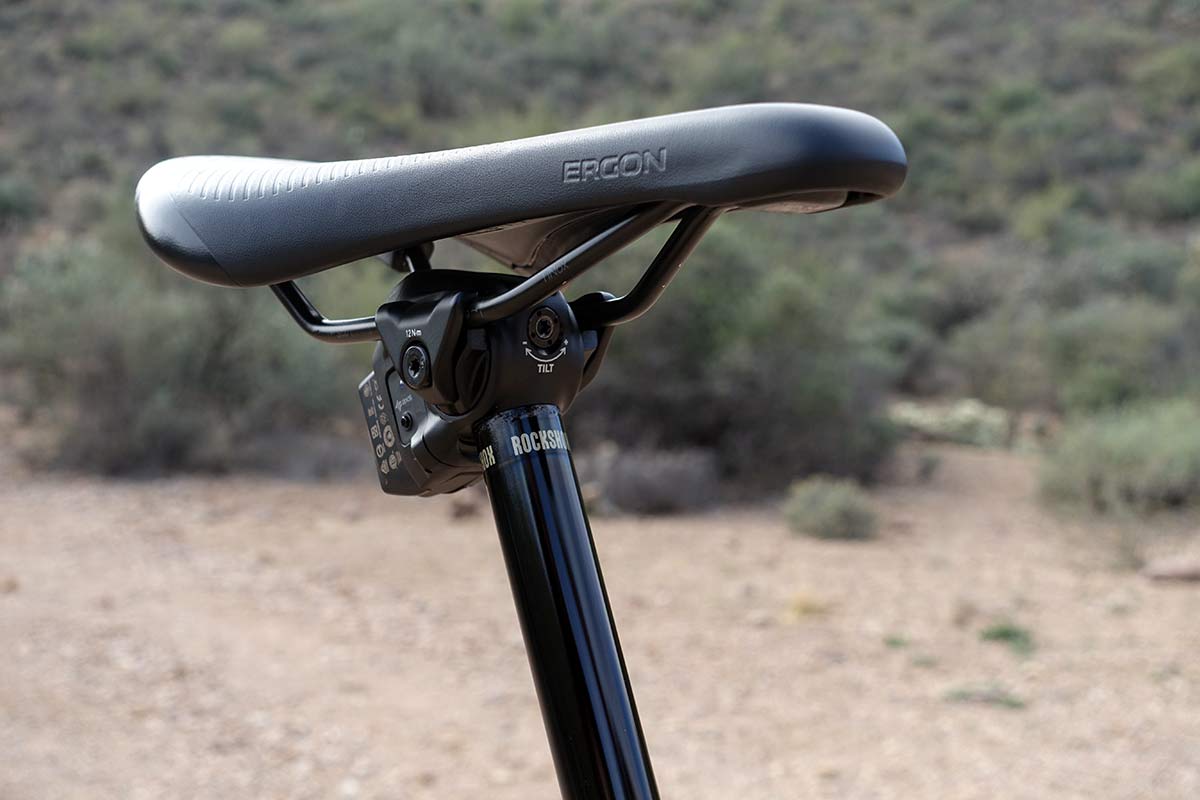 Another killer feature is the improved saddle adjustment. Bolts on the side secure the saddle to the post by capturing the rails. Loosen those to adjust fore-aft position without affecting tilt. Saddle angle is handled by a front-facing bolt that sits flush with the post’s head. It’s clean, and it works. 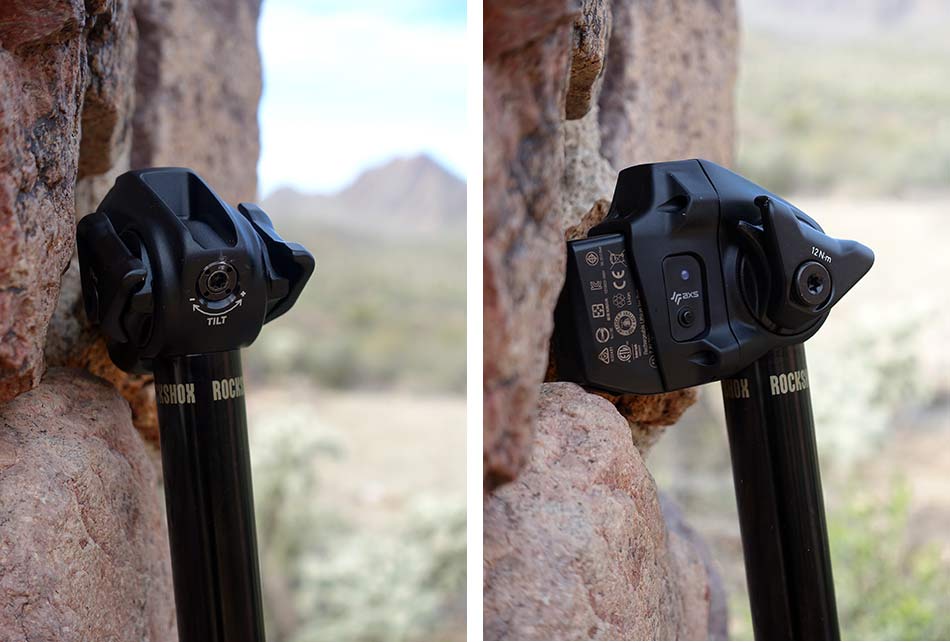 The shifter use a CR2032 coin cell battery, and all parts are IPX7 waterproof. The post uses the same battery as the other eTap / AXS parts, so you can swap it in (or borrow it) as needed.

They say it’s good for about 40-60 hours of trail time and recharges in under an hour. It auto wakes when it senses movement, so no need to turn it off when parking your bike, but if you’re transporting it on the back of a car or shuttle, probably best to just remove the battery. You can check battery charge by pressing the button on the post (also used to pair it) – green means nearly full, red means about half charged, and blinking red means time to charge it. You do need the battery to operate it, too – there’s no manual release to drop or extend it. 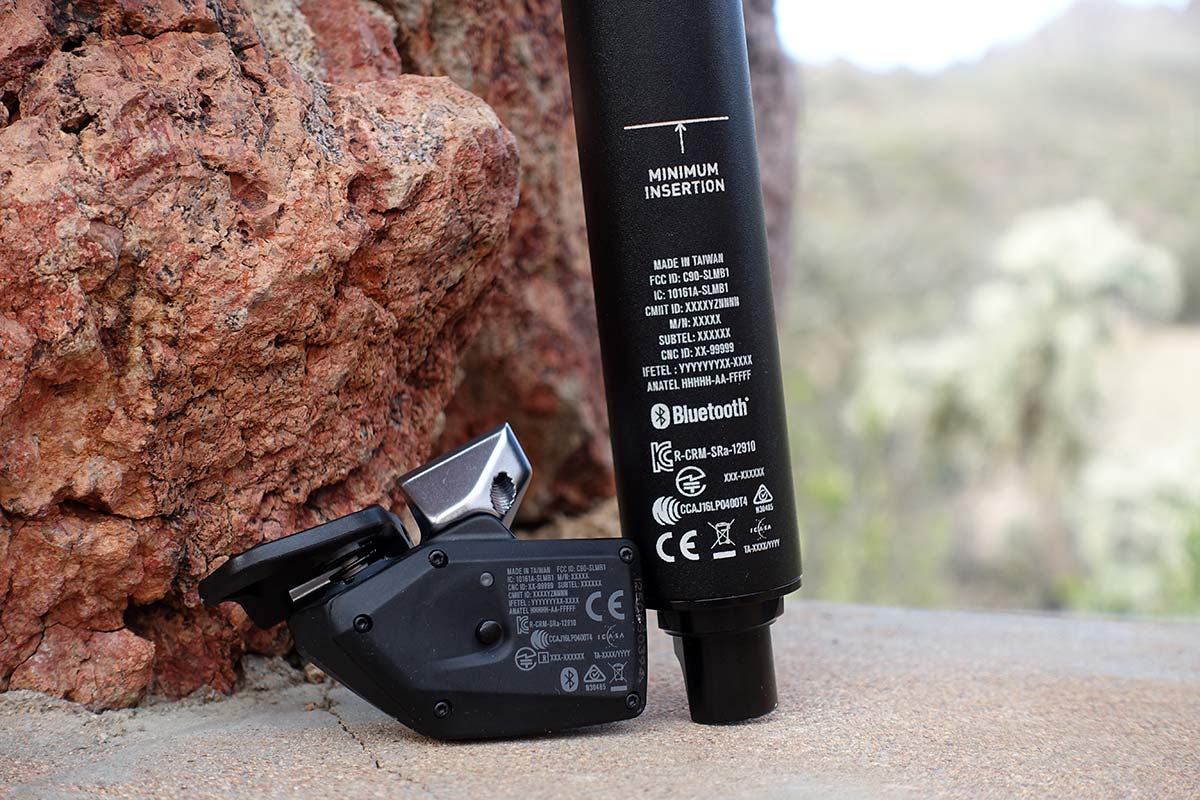 The remote and post communicate via the same proprietary Bluetooth protocol as the rest, and it uses regular Bluetooth to pair with your smartphone so you can use the AXS app to customize the buttons.

Want your Eagle AXS shifter to operate the dropper? Easy. Just assign the dropper’s remote to handle up or downshifts, then reassign one of the shift paddles to move the dropper. 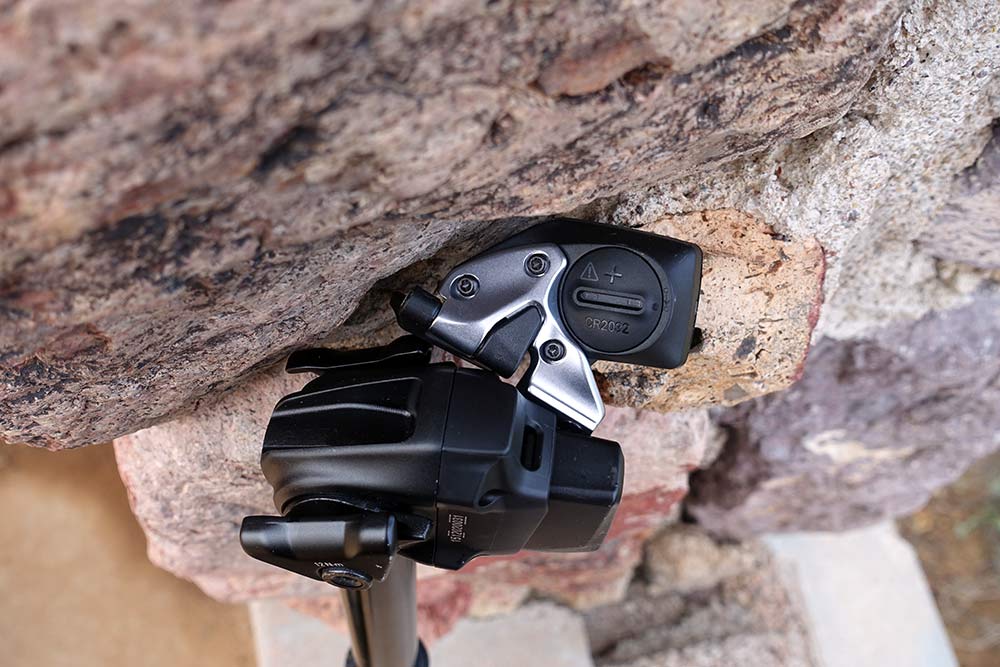 Technically, you could adjust return speed by letting a little air out of the chamber, but they don’t officially recommend that. It comes set at or near the max 250psi setting. Which seemed perfectly quick thanks to its new lower friction fluid, grease and IFP inside. 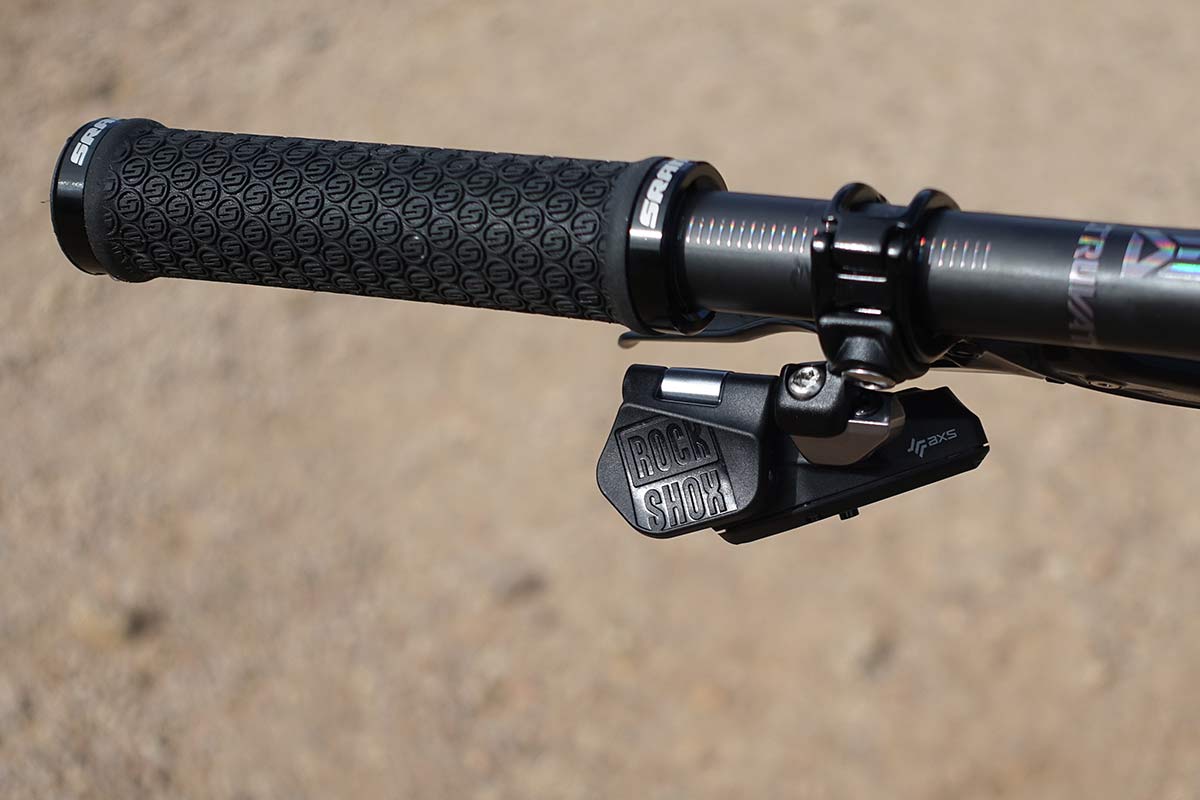 The thumb action is the same as what we’re all used to: hold it down to drop it, hit it again to raise it. It signals quickly enough that you can stop it part way down or up, which is probably the easiest way to prove there’s virtually zero lag.

The new Reverb AXS is just one part of the complete story. Want to see the rest of the new SRAM AXS parts? Here’s our complete list of tech stories from the launch:

Perfectly missed chance to get a good 27.2 on the market.

You can make the left shifter pod, which has a single button, do whatever you want. Make the RD go up, make the RD for down, or make the Reverb actuate. Basically making it a flat bar version of the dropbar shifter. You can swap around the buttons using the AXS app.

They should have all the bugs worked out around 2022.

My current seatposts are all wireless too.

Only if you buy a bunch of them.

Bikeyoke has had a quick bleed using just a 4mm for years and it works perfectly. Also lighter and cheaper!

And you do not have to remove the post to use it!

Would it kill a manufacturer to make a 20mm offset dropper….come on already!

I know it’s bleeding edge, cool and high-tech… But for the price of a decent entry level bike?

Can someone tell my were i can find this Descendant ‘oilslick’ handlebar?
Greetings from Germany