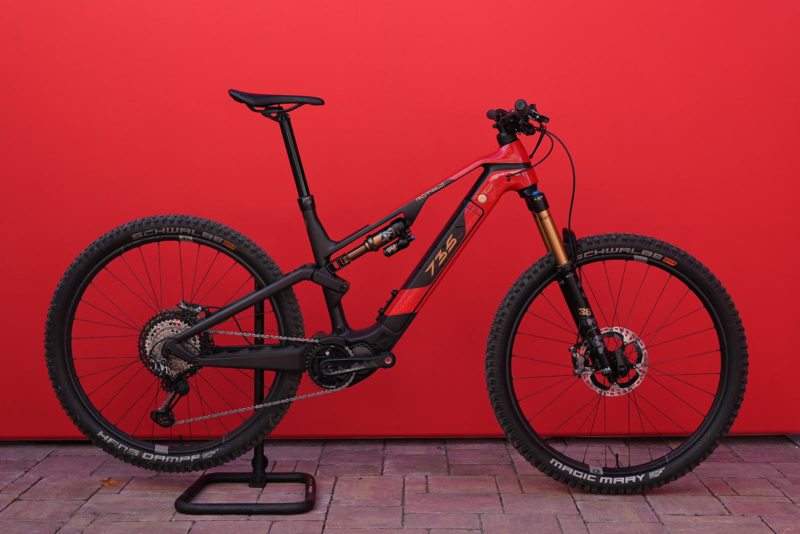 Rotwild’s original entries into the lightweight e-mountain bike category, the R.X375 and R.E375, relied on a lithe frame and compact 375-watt hour battery to come in around 19kg (~41lbs). But they wanted more power and longer rides, without adding a lot of weight.

The new R.X735 is the answer, with double the range thanks to a new 720-watt hour custom battery paired to a Shimano EP8 motor, all housed in a new front triangle. Together, the updates only add about 2kg for a claimed bike weight of 21kg (~46lb, size Large).

It’s a 29er, with 144mm rear travel and a 150mm fork, that’s designed to be an all-rounder for aggressive riders. I found that to be mostly true, check my review at the bottom of this post. But first, the tech details… 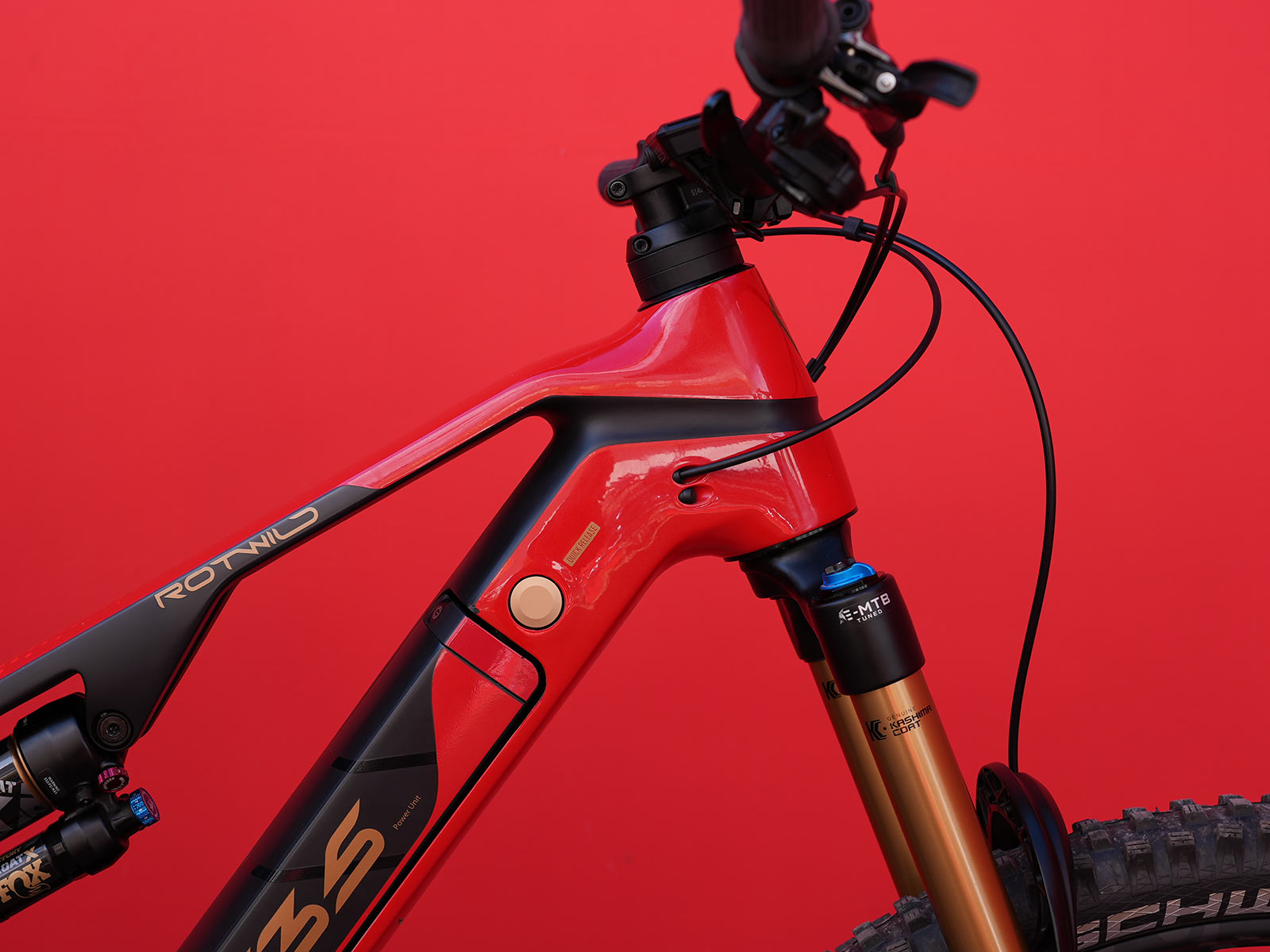 Where the 375 model comes in distinct Trail and Enduro models, the more powerful 735 only comes in the 144mm travel trail model. A 65.5º head angle paired with long-ish 450mm chainstay length makes it very stable at speed and on descents by giving it a slightly longer than normal wheelbase.

Rotwild has always impressed me with their engineering and design, which is probably why fellow German brand Porsche uses them to build their bikes. 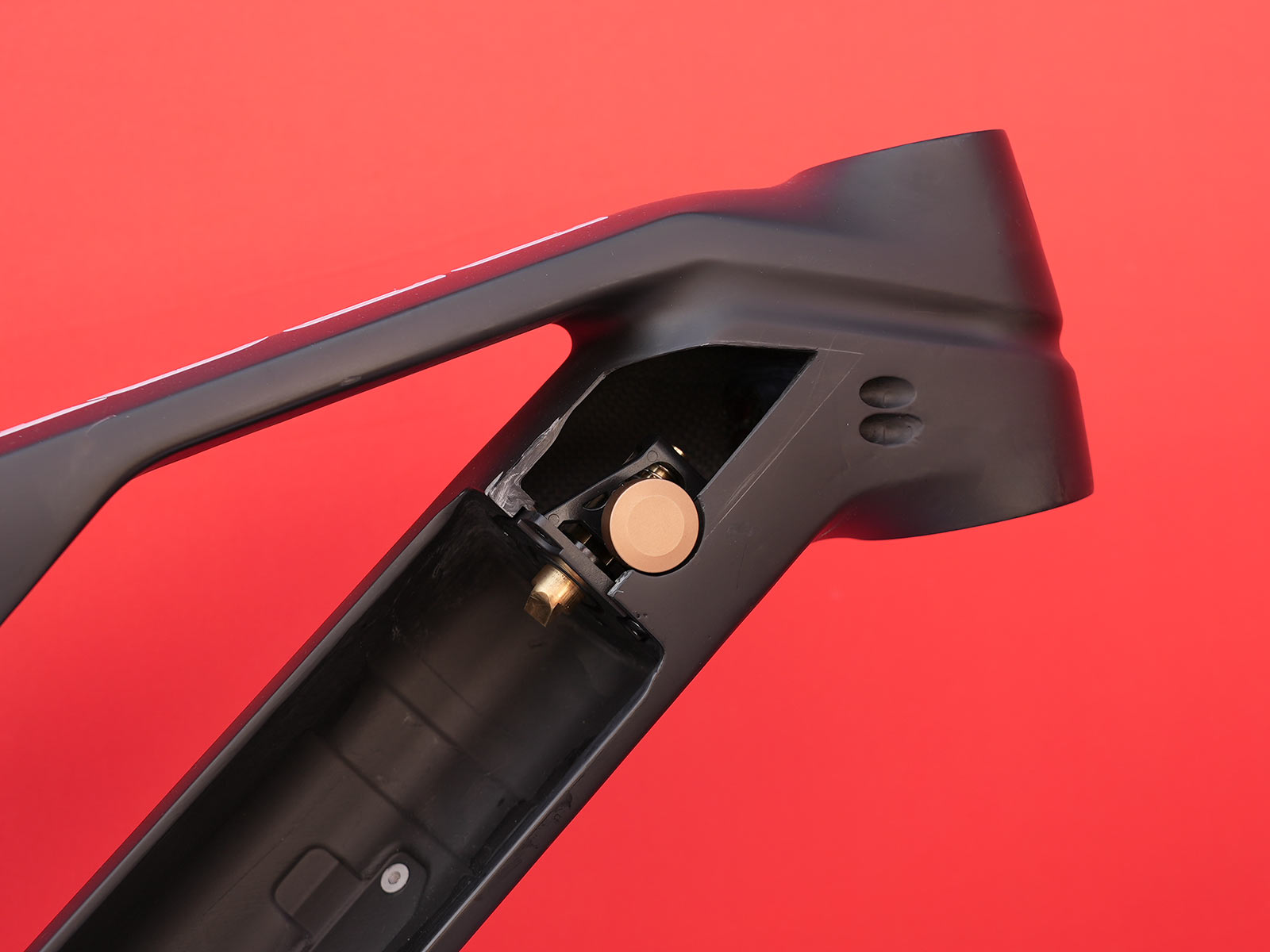 During development, Shimano’s motors were hard to come by, so they 3D-printed a placeholder so they could keep working on the design.

They also 3D-printed frame sections to test the brass battery release button mechanism, which has an extremely satisfying tactile feel and “click” that lives up to German automotive standards (close a door on a Mercedes and tell me you’re not impressed). 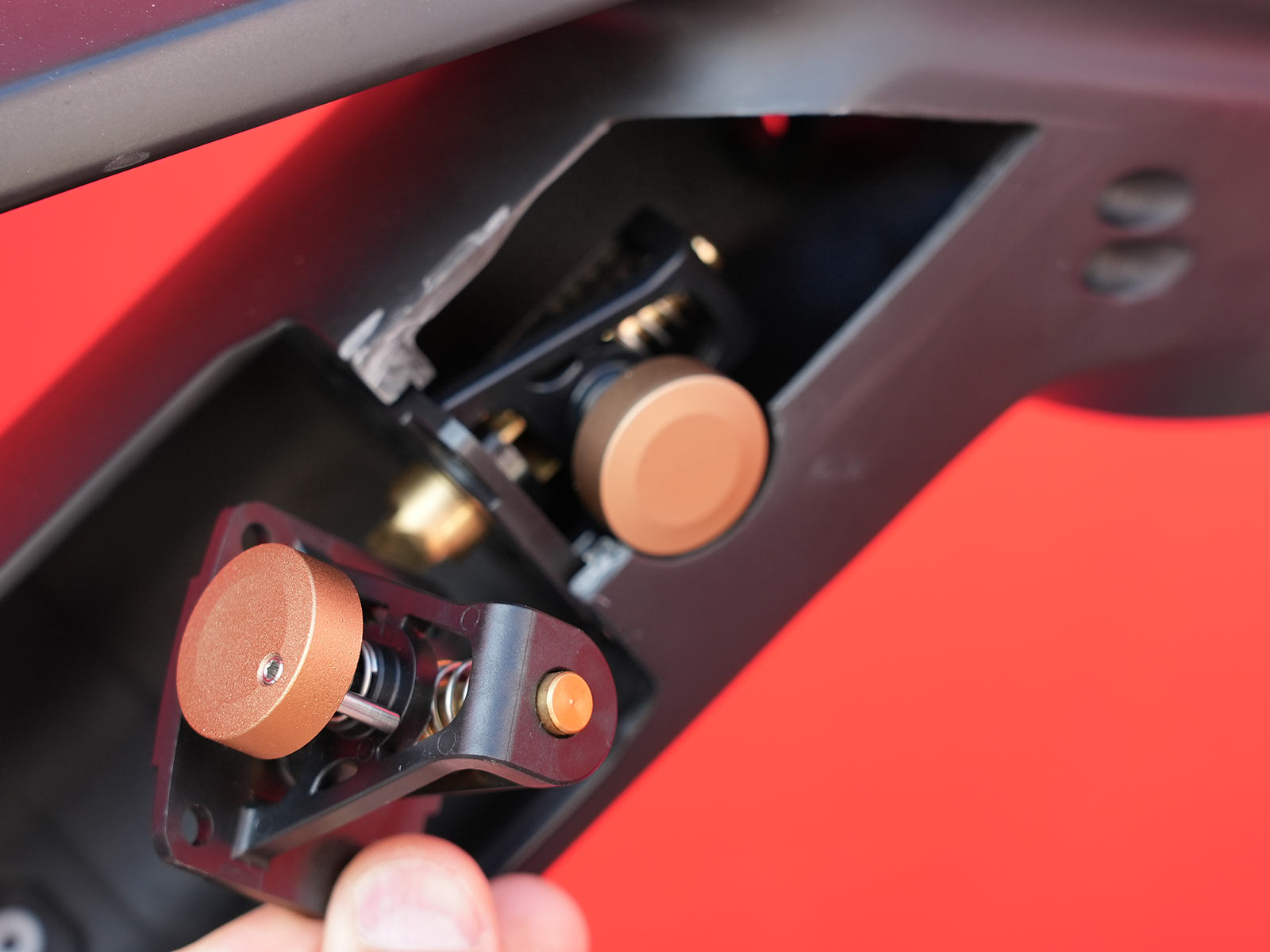 The battery release button is also easily replaceable should it ever wear out. And, there’s an aftermarket button that adds a security screw that prevents the button from being pushed, thus preventing the battery from being released unless you remove the small bolt. 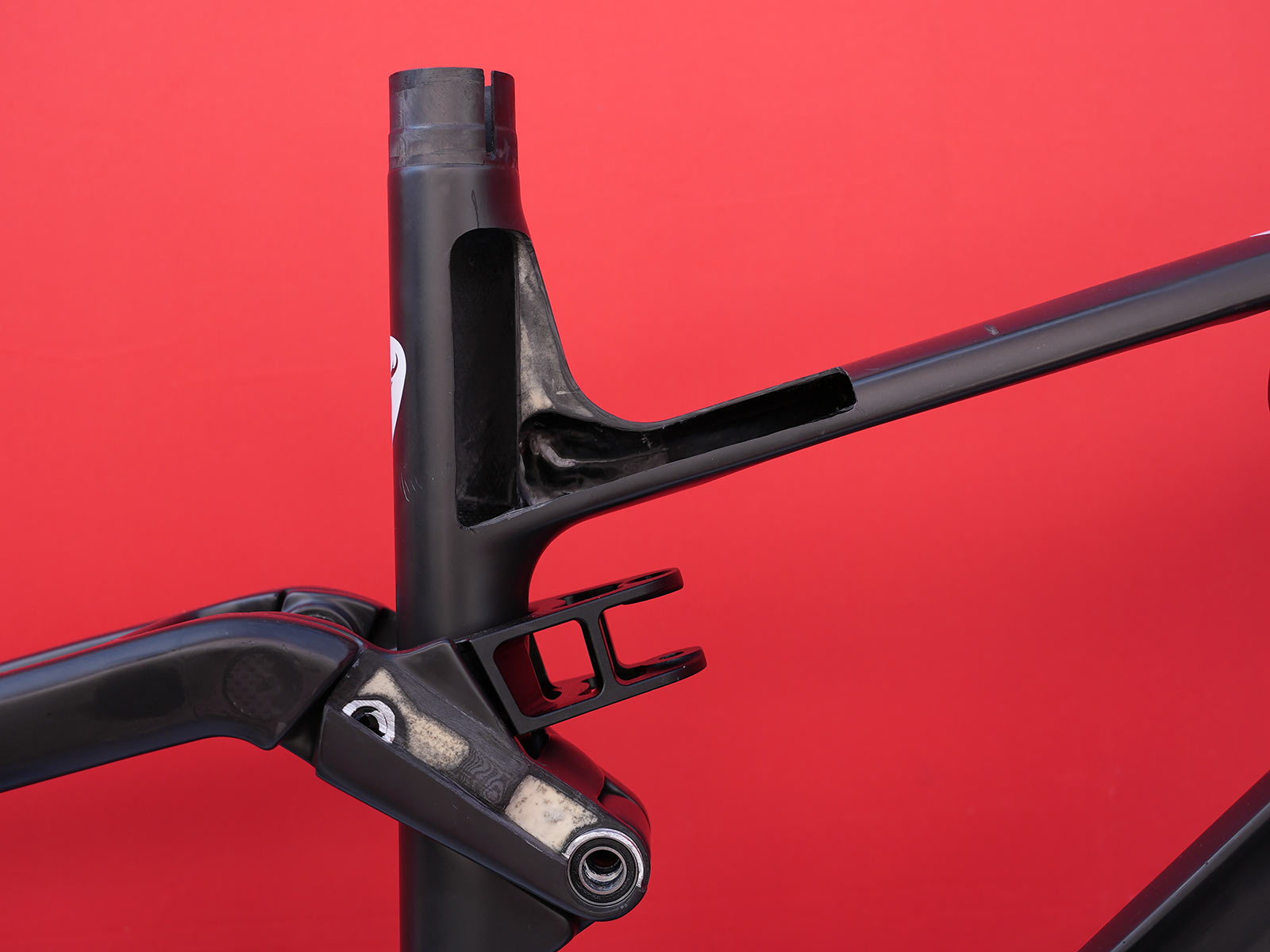 The rocker linkage uses a foam core to save weight and create a very stiff carbon part. They use another bit around the seatpost to reinforce the tube since it extends quite a bit above the top tube. (That design may limit total dropper length, but it does give you a lot of standover clearance)

Elsewhere in the frame are full internal sleeves and tubes to guide shift and brake cables and hoses, making service and installs easy, and keeping things rattle-free on the ride. 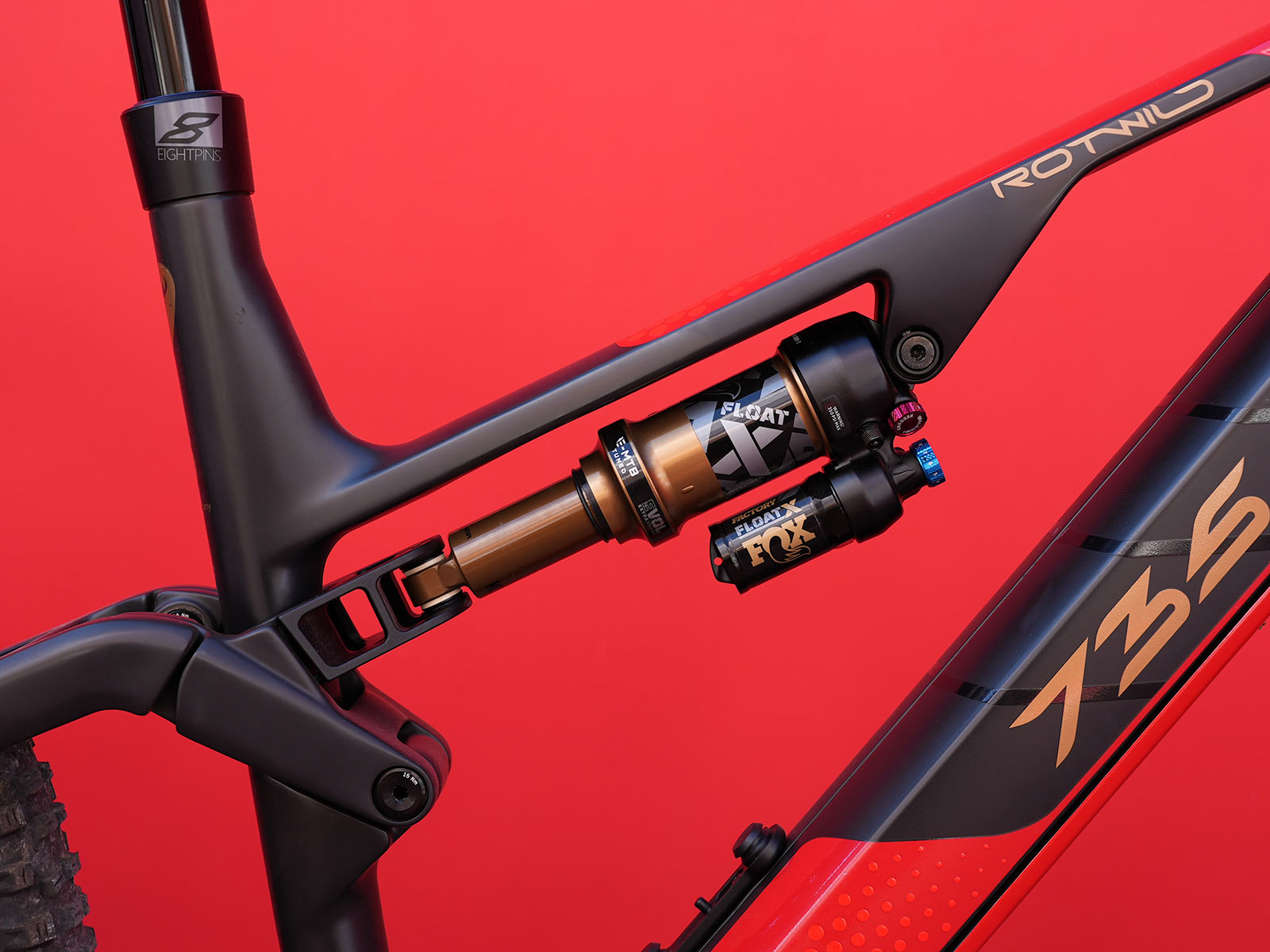 While the smaller R.X375 has 140mm rear travel and gets an inline Fox shock, they upgraded the R.X735 to 150mm rear travel with a piggyback Float X rear shock. 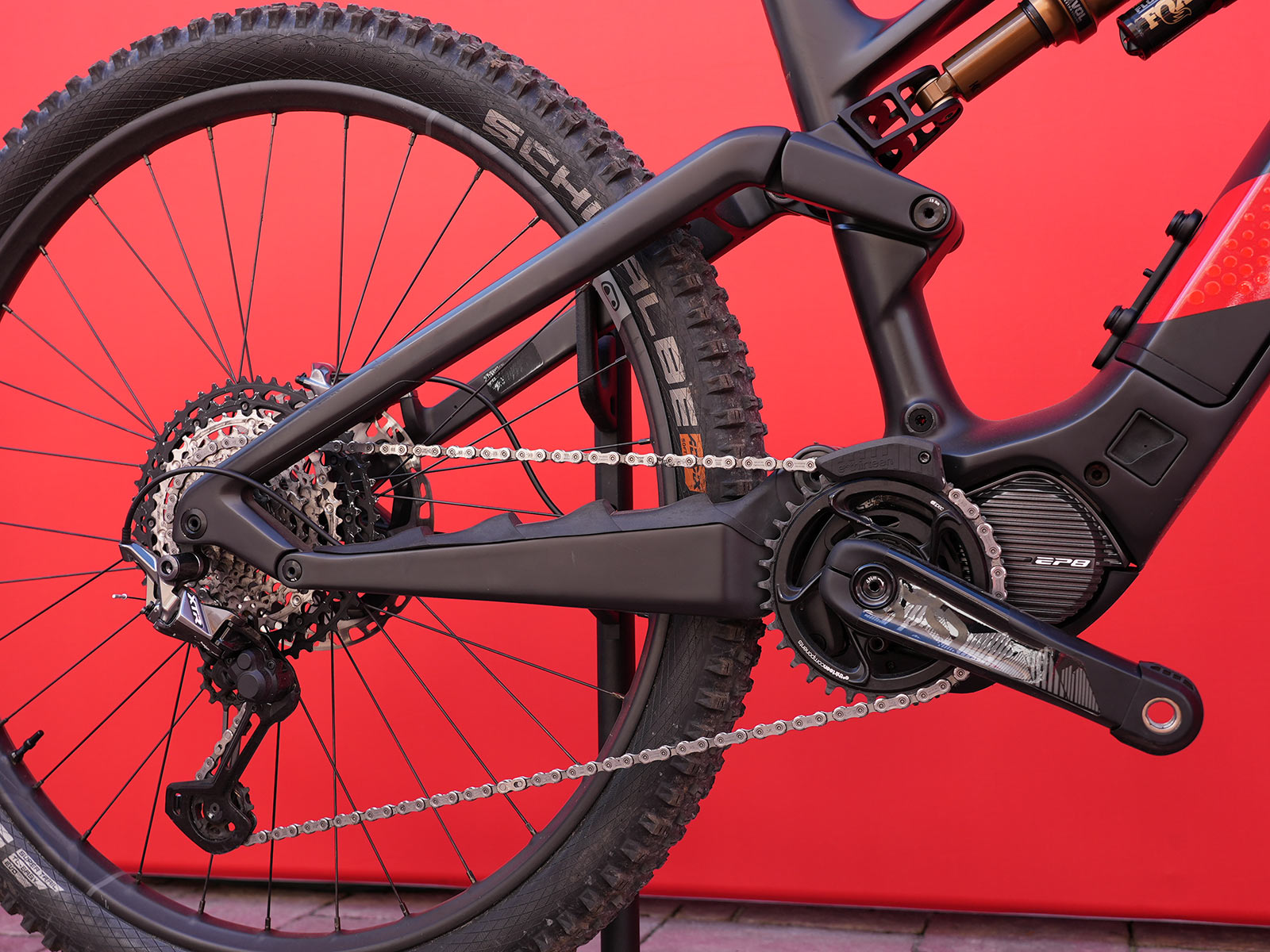 Top-shelf spec on the Ultra model makes it pricey, but the Core and Pro models all share the same frame and tech. 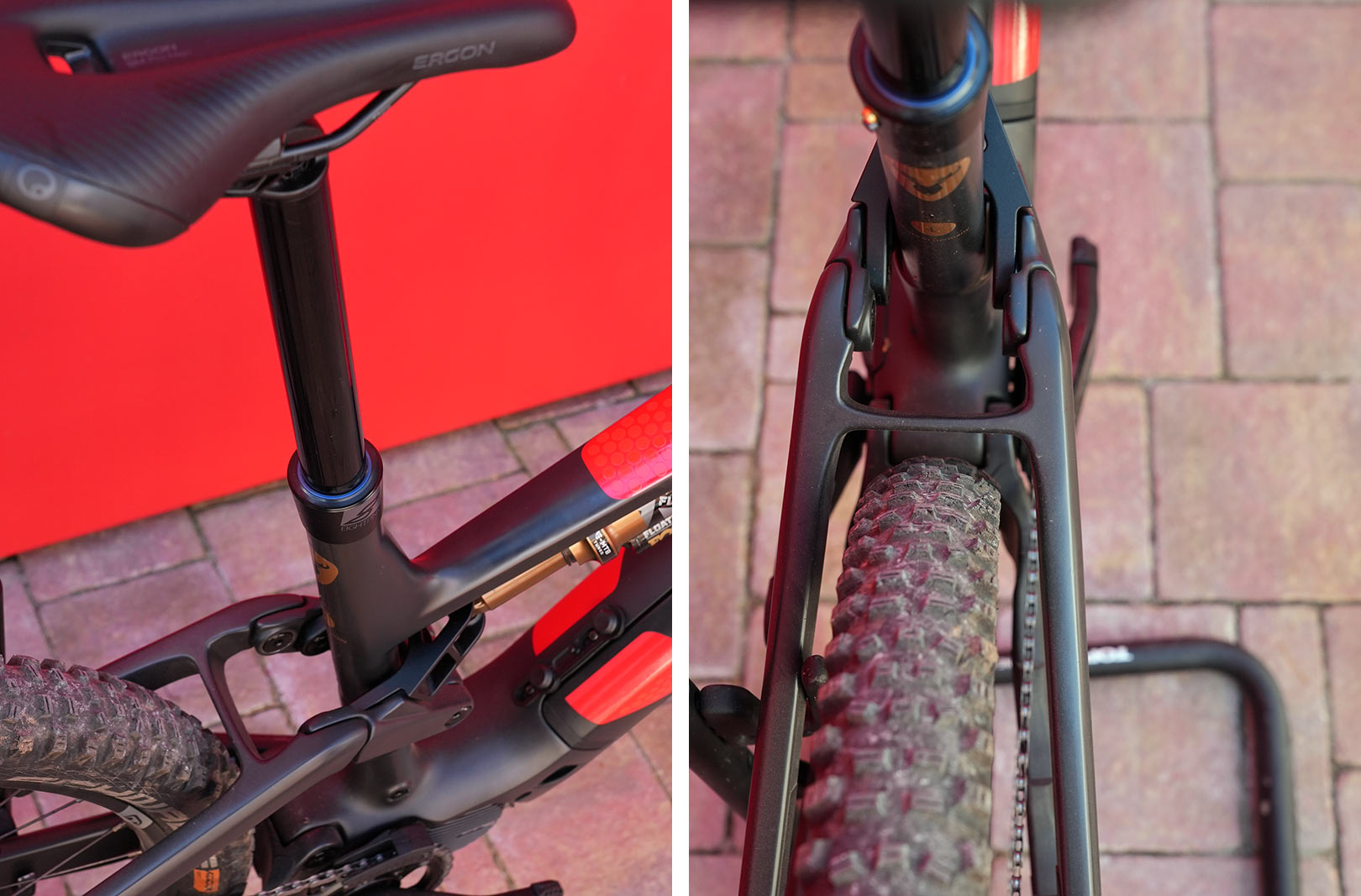 Other nice touches include a long-travel, integrated 8PINS dropper seatpost and clearance for 29×2.6″ tires. 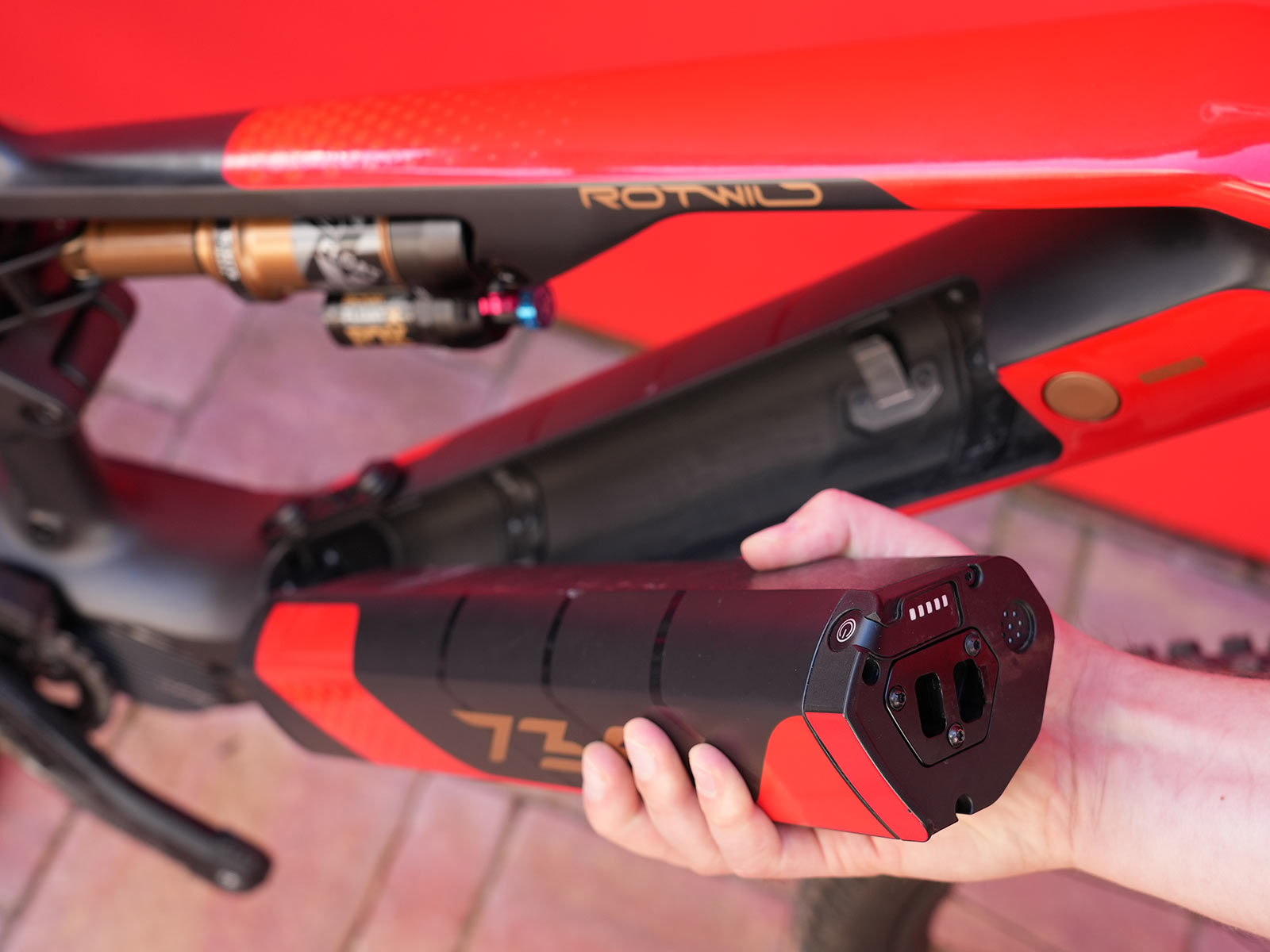 The new battery compartment is their first to release on the right-hand side of the frame. 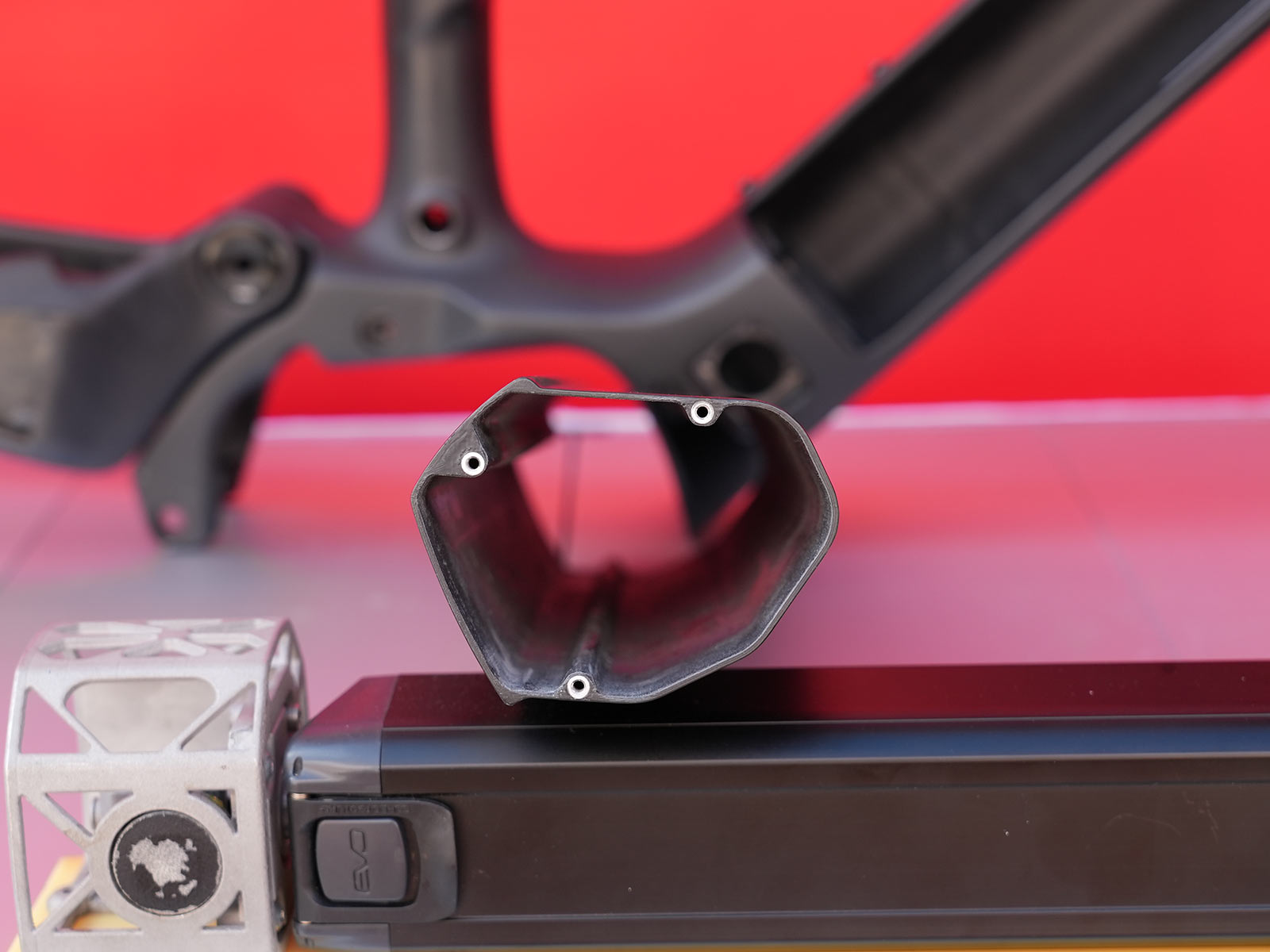 The custom power cell is housed inside a custom carbon shell that’s made on a rigid mandrel to ensure perfect interior dimensions…a requirement for fitting the batteries inside without any wiggle room. 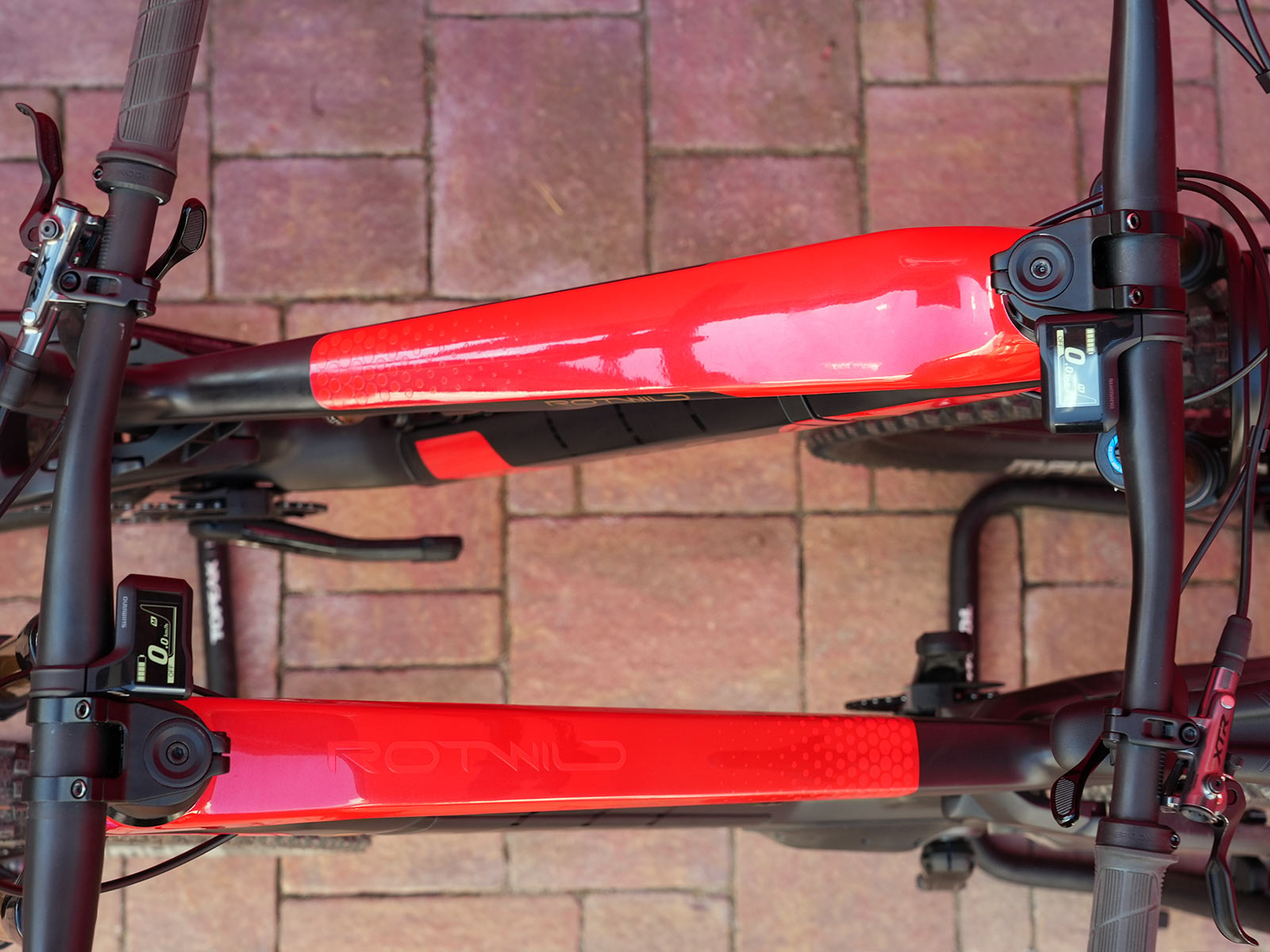 The R.X735 frame shown at top, compared to the thinner R.X375 frame with a smaller battery on bottom.

To make room, the downtube had to be larger than on the R.X/E375 frames. So they also enlarged the top tube to match it aesthetically. 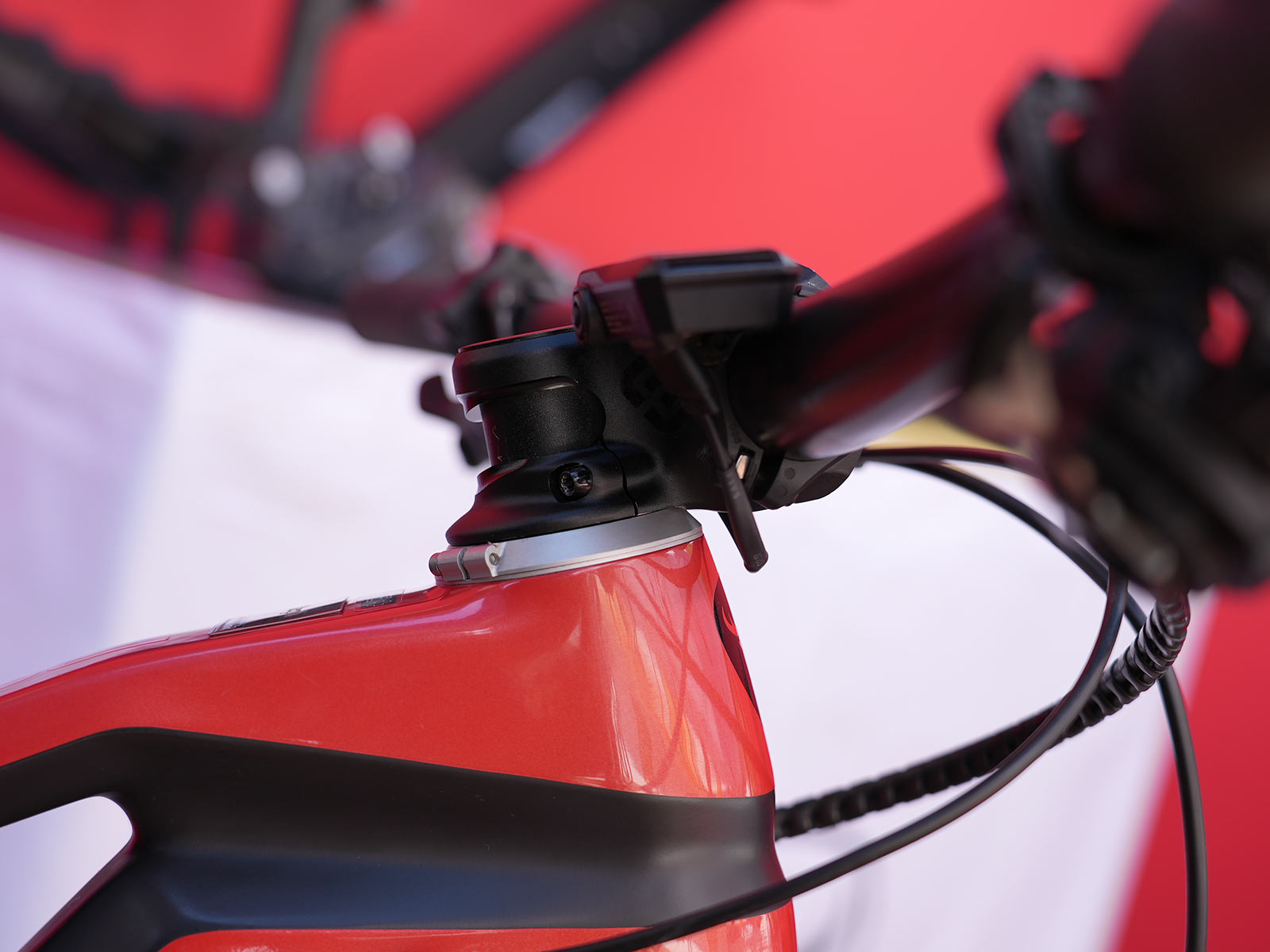 Coming later will be this new stem (and some other cockpit parts) from a 3rd party brand. Technically these are prototypes that we can’t tell you about…

…but check out that Di2 and motor control wiring groove to bring the wires under the grips and into the handlebar, where they’ll to into the stem and down through a port on the headset cap for a totally stealth appearance. Compared to e-bikes with extra wires sticking out everywhere, this is a refreshingly clean design. Stay tuned for more details on these parts, as they likely won’t be exclusive to Rotwild. 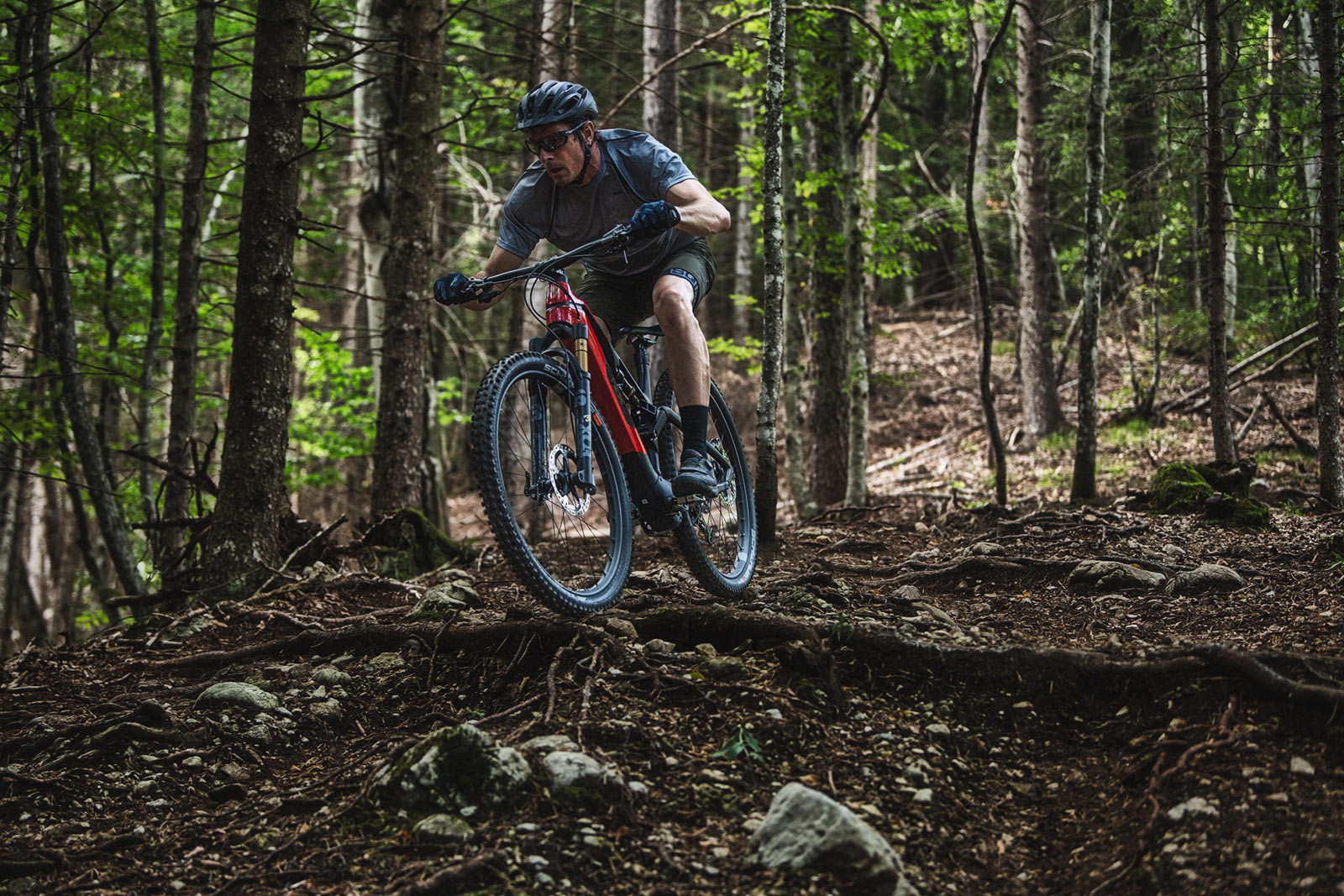 I took a size Large R.X735 out for a couple rides at the Dolomiti Paganella Bike Park and surrounding trails, mixing rough natural terrain with groomed flow trails, berms, and wood features.

It was a great test for Rotwild’s “all-rounder” claims, and indeed, the bike was pretty good on all the things. It felt rock solid without feeling heavy.

Perhaps because I was trying to keep up with friends on longer travel bikes, but I felt like I had my fastest lap down Willy Wonka on this bike, despite being under-gunned by 10-20mm travel compared to everything else I’d ridden that week.

To be fair, it was also my last lap for the trip, so I’d gotten to know the trails a good bit by then, but still an admirable showing for a 150mm bike up against bigger, slacker beasts. 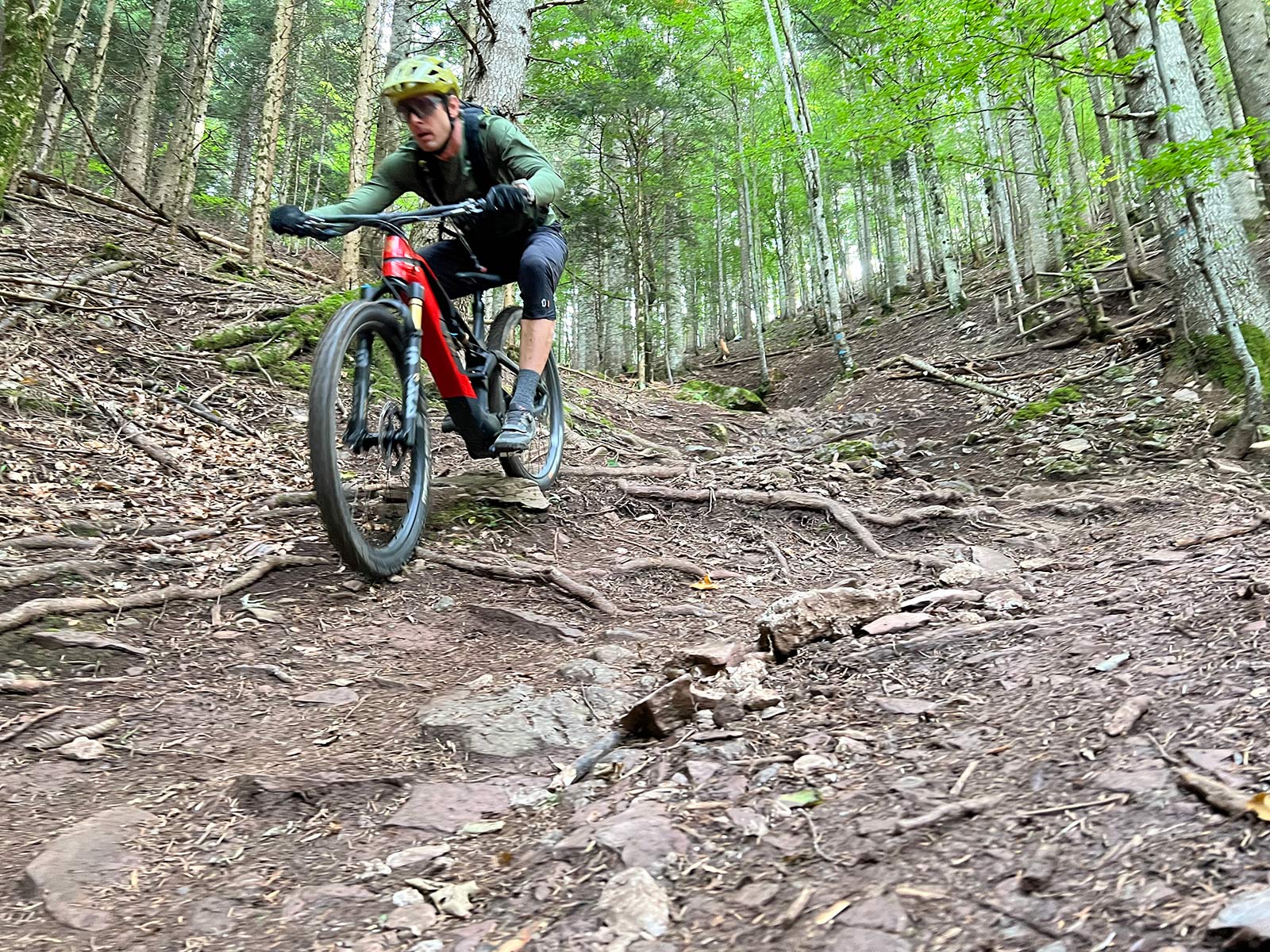 This was one of the tamer sections on Secret Trail, where I was definitely under biked but managed to ride most of it.

On techy, loose climbs, I felt like the rear tire would benefit by being tucked under me more with shorter chainstays to provide better traction. But that was the only time I felt like the long stays and wheelbase were inappropriate.

And I think, should I own this bike, I’d probably want the XL…maybe…the caveat being that it adds another 30mm to the already long wheelbase even though chainstays remain fixed at 450mm across all frame sizes. The Large was plenty maneuverable, though, so I’d just want to test ride both back to back (which is what I recommend anyone do whenever possible).

Overall, I’d agree that Rotwild’s R.X735 is a great all-rounder. It’s a bike I could put any of my friends on and they’d be able to hang, and a bike I could take to some of my favorite trails and have fun on. It seems well built, felt solid, and had great spec…

…and you pay for that. The Core model runs €7,999, with a Pro model above that for €9,499. The Ultra model (tested) with Fox Factory suspension is €12,499. That puts it a good bit above some similarly spec’d competitors, but you’re getting a high level of integration, fit, and finish here that’s not always present on every brand. Definitely worth a look if it’s in your budget and you want one high-quality eMTB to handle almost any type of riding.

Are these available in the USA?

“During development, Shimano’s motors were hard to come by, so they 3D-printed a placeholder so they could keep working on the design.” This is dumb. They could get a few motors for development no problem.

I gotta wonder why they thought 375 Wh was OK to begin with when even the 500Wh Shimano battery is just a normal length ride of about 2000 ft climbing, 2 hours and 20 miles in Trail mode, roughly speaking?? That’s unless they detuned the EP8 like the Orbea Rise. Which brings up that unless the bike is really light and really expensive, and even then, after one gets used to a heavier bike you want more power to balance out the rider power to weight ratio and to ride up steeper trails than you can on an Amish bike. So this whole story about how cool they now have a 750 Wh battery is not that much of a story. Just another ebike with a 750 Wh battery.

You don’t need an “all rounder” or shorter travel with an ebike. This is stuff for pedal only bikes for the most part. Longer travel still climbs with the assist just as well if not better than shorter amount of travel. I guess you can’t be too critical here.. although there was some admittance to this. Otherwise manufacturers get a bit bummed out if the test does not pull enough punches…so you run the risk of getting less stuff to test and less invited to media product camps. Which is to say these things are not really tests but reviews. Consumers need to understand this and take alot of it with a grain of salt. These bikes are alot of money so best to make informed decisions with more information, yet where? Events like Outerbike and shop demos.