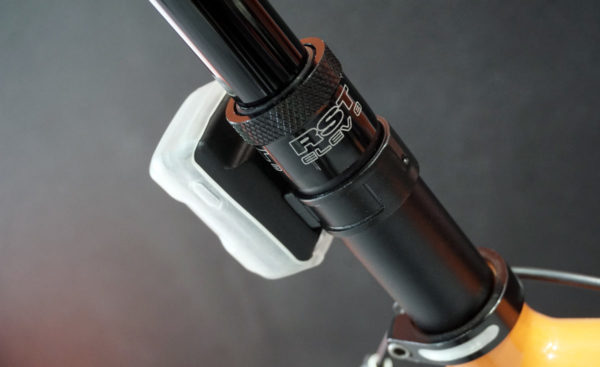 The upcoming RST ELEV8 electronic dropper post is almost ready for action. They say the servo and electronics are done, they’re just working on the details to make sure both the remote and the receiver are fully waterproof. They’ve added a silicone cover to the receiver to protect it from rear tire mud splatter.

We’re seeing more wireless dropper posts, with Magura’s having been on the market long enough to be updated, and Rockshox apparently working on a wireless Reverb. RST’s stands out for the use of a standard battery that’s both USB rechargable and swappable. Which means, in a pinch, you could stop at most any drug store or big box and pickup a replacement. 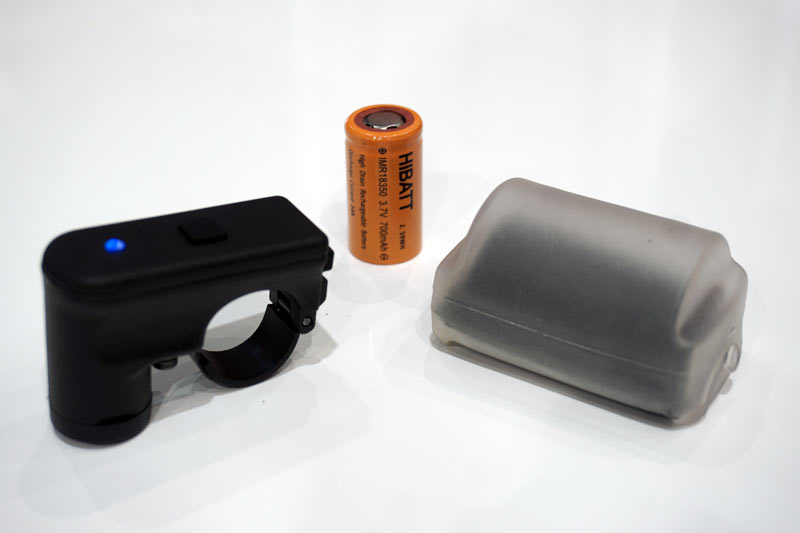 But they’re also looking at ways to work with other manufacturers, both of components and bikes. It’s a laudable effort to integrate this into existing electronics systems so you don’t have so many different battery types and standards, or as many separate remotes. 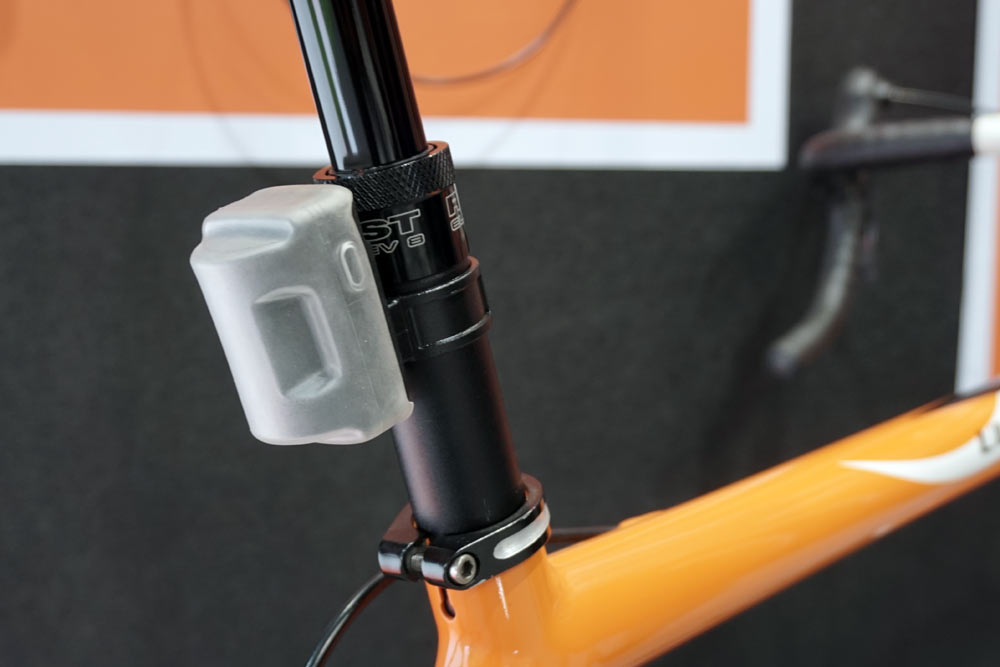 Look for the ELEV8 to come in 100/125/150 millimeter travel options, and 30.9/31.6 diameters. They say there’s just a 0.6 second lag time between pressing the button and it dropping, so it’s pretty quick. And it closes the valve quickly enough that you won’t be hanging out in an awkward squat waiting for it to save the position. We tried it out at the Taipei Cycle Show and it worked flawlessly…easily controllable to set it anywhere in it’s travel range, feeling much like a traditionally controlled dropper should. It should be out early next year, with a retail of $999.

They’re also working on a 27.2 dropper. Since the electronics are simply an additional (alternate) method of opening or closing the valve, they can offer that one as mechanical or wireless, too. 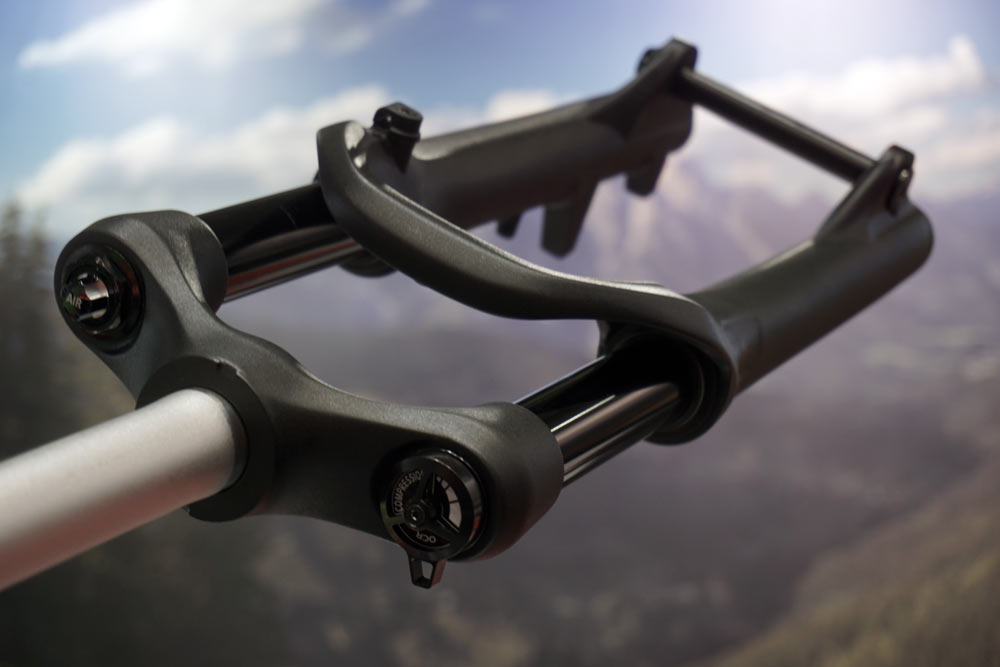 For the kids, finding a high performance suspension fork gets harder as the wheel sizes get smaller. But RST is working on a proper air fork with the external compression damping controls us big kids are used to. This one is a prototype, but from the looks of it, it’ll be a dual air system. Which should prove helpful in getting the negative spring set up for easing the fork into its travel…something that can be hard for air forks under smaller, lighter riders. 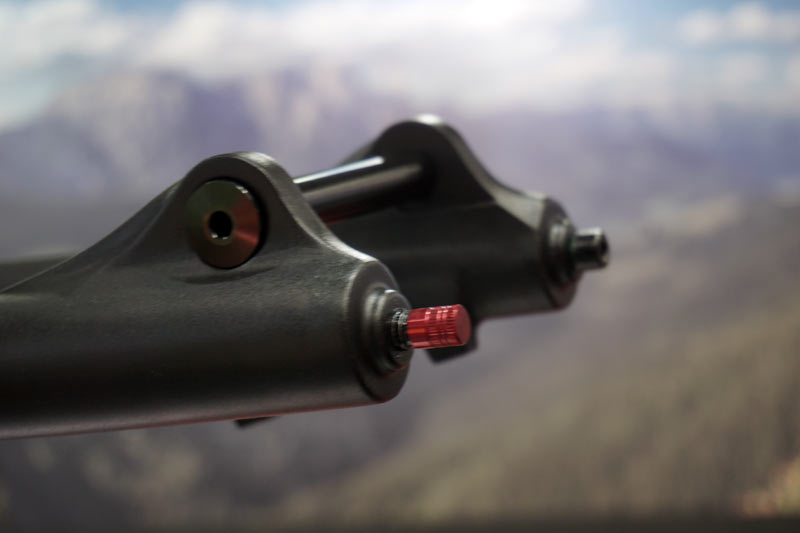 To fit the tech inside such a small package, the axles are moved up on the lowers, which is a simple but smart solution to getting younger groms on shred-worthy bikes.

Yeah, but you get to charge it!

Not just $1k for a seatpost, but an RST. Every time I see that number, at first I assume there was a typo – one too many zeros, because $100 would be the most I could ever see anyone spending for any RST product.

The only advantage I can see to a wireless post is compatibility with frames without dropper routing, but for $1k, you could buy a good, proven post like a Bikeyoke or Fox, plus a frame for it.

Twice the price of a Magura, and twice the activation delay? Not looking like a home run at this point.

I was really hoping for a trail fork with 20″ of travel.

Seat post? I came here for the 20″ travel suspension frok.