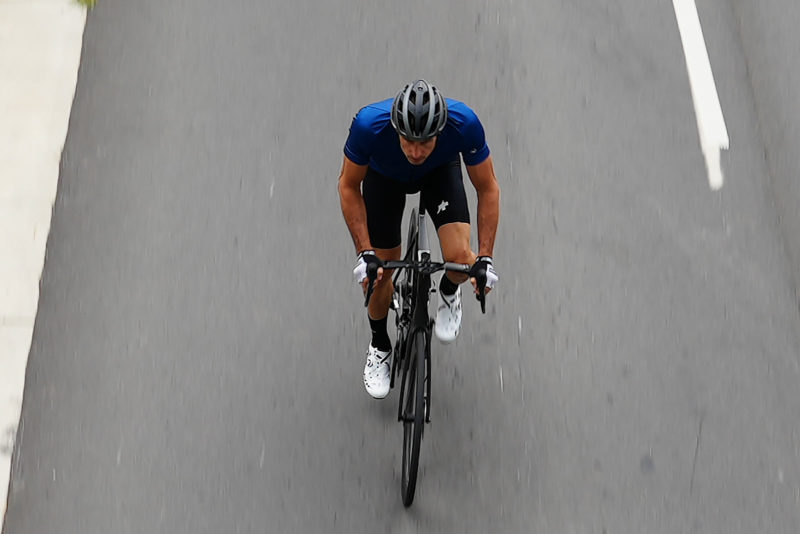 When it comes to choosing the most protective, safest helmet for cycling, Virginia Tech’s rating system is the gold standard for objective helmet testing. Done in collaboration with the Insurance Institute for Highway Safety, the team at Virginia Tech tested 123 of the most popular helmets on the market and gave them both a star ranking and a safety score.

(To learn more about helmets and what makes a good helmet, what the deal with MIPS is, and any other questions you may have, check out our full Helmet Explainer article right here.)

In fact, this rating has become more of a benchmark among brands than the standard CE (European) and CPSC (U.S) safety testing that a helmet must pass before it’s allowed to be sold in the respective regions. More on that down below, first let’s see what makes VA Tech’s test so important…

The STAR methodology developed by Virginia Tech uses an oblique impact drop tower to test the helmet’s efficacy, dropping it onto an anvil set at a 45-degree angle that best replicates the angle that most cyclists will hit their heads in crashes.

Like a medieval torture device, the anvil is coated with sandpaper to simulate road surface (ouch). Helmets—strapped onto a mannequin head—are dropped 12 different ways, varying the main point of contact as well as the speed that they’re dropped. Multiple helmets are used in each test in order to prevent impacts near each other, since theoretically, a cyclist is replacing a helmet after any crash where it sustains a hit.

Virginia Tech’s “Summation of Tests for the Analysis of Risk” (aka STAR) rating formula.

After the testing, helmets are given a Summation of Tests for the Analysis of Risk—STAR—Rating. The STAR equation was originally developed for testing with football helmets and concussion incidence rate, but has been modified for cyclists. The equation calculates concussion risk from impact based on the drop tests. (You can read the full testing protocol here.)

Those “Stars” are awarded in two ways – a numerical STAR Rating, and an actual ⭐️ rating  from 1 to 5 stars. Unfortunately, they have inverse meanings…a lower number is better, but a higher ⭐️ rating is better. 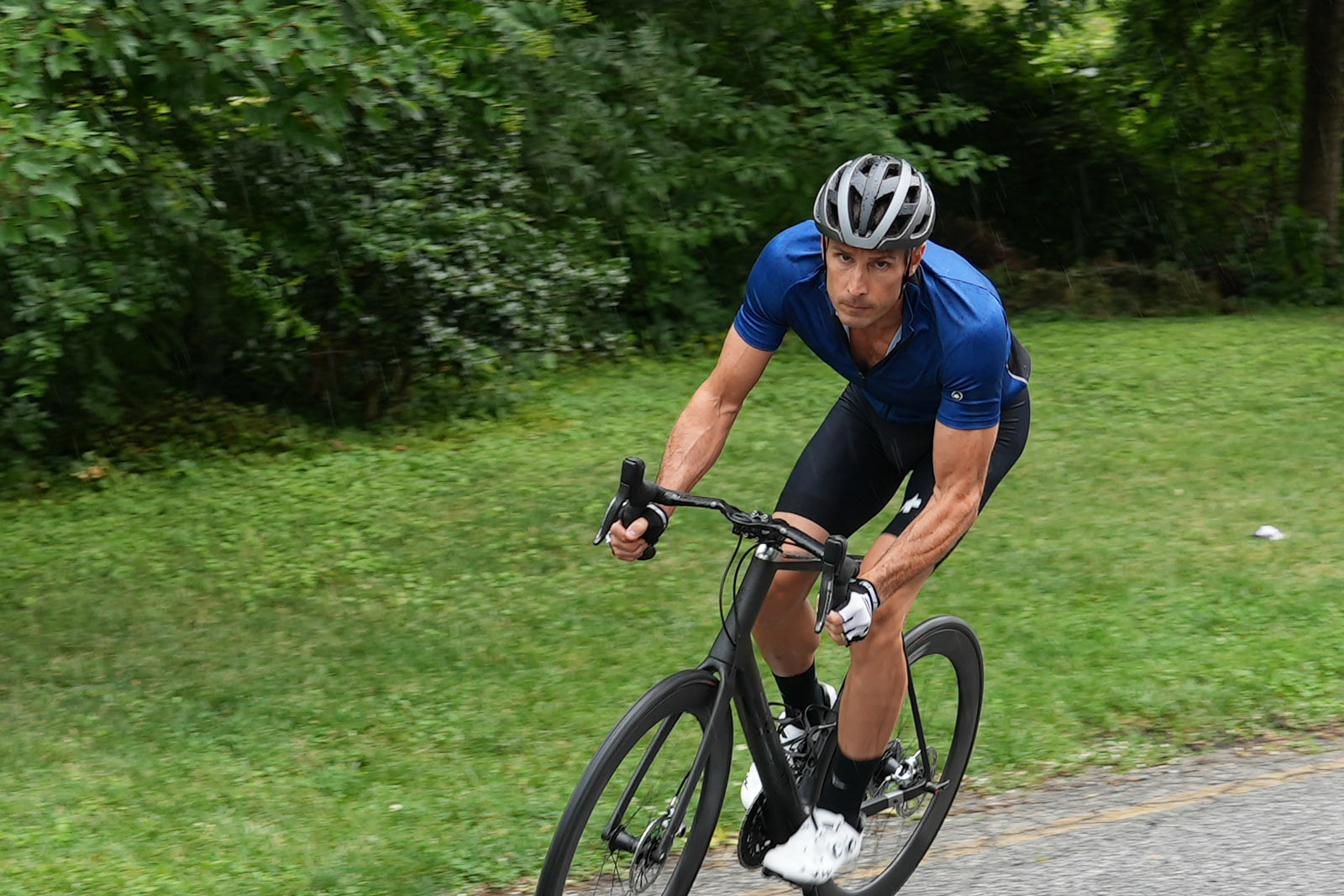 The Lazer G1 is the top-rated road bike helmet for 2021. Fortunately, it’s also a very comfortable, lightweight helmet we really like, too!

Think of the lower STAR number as a reduced likelihood of concussion. Or, as the amount of impact force transmitted to your brain. Lower is better.

But visually, a ⭐️⭐️⭐️⭐️⭐️ rating very clearly indicates something is better than a ⭐️⭐️⭐️ helmet – it’s easier to understand, and easier for a brand to slap on their marketing materials.

So, lower numbers -under 14- get five stars. If a helmet has five stars, a concussion is more than 70 percent less likely to occur. The higher the STAR rating number, the lower the number of ⭐️s it receives.  Four stars means your concussion risk is reduced between 60 and 70 percent, while a one-star ranking means less than 40 percent reduction in your risk. (It should be noted that wearing no helmet reduces your risk 0 percent—no stars.)

You can watch how the test process works here:

Virginia Tech also notes that these scores are only valid if the helmet is worn properly, sitting 1-2 inches above the browline and appropriately tightened. A loose helmet won’t provide the same level of protection.

Before we get into this list of the Safest Road Helmets, it is important to note that this list is based strictly on the results from Virginia Tech, and that not every helmet on the market was tested.

“A small percentage of the models on the market have been rated, all chosen by the manufacturers and sent to Virginia Tech,” the researchers note. They also emphasize that these rankings are just one decision-making factor in a helmet-buying decision. But it’s an important factor, so let’s dig into the top options: 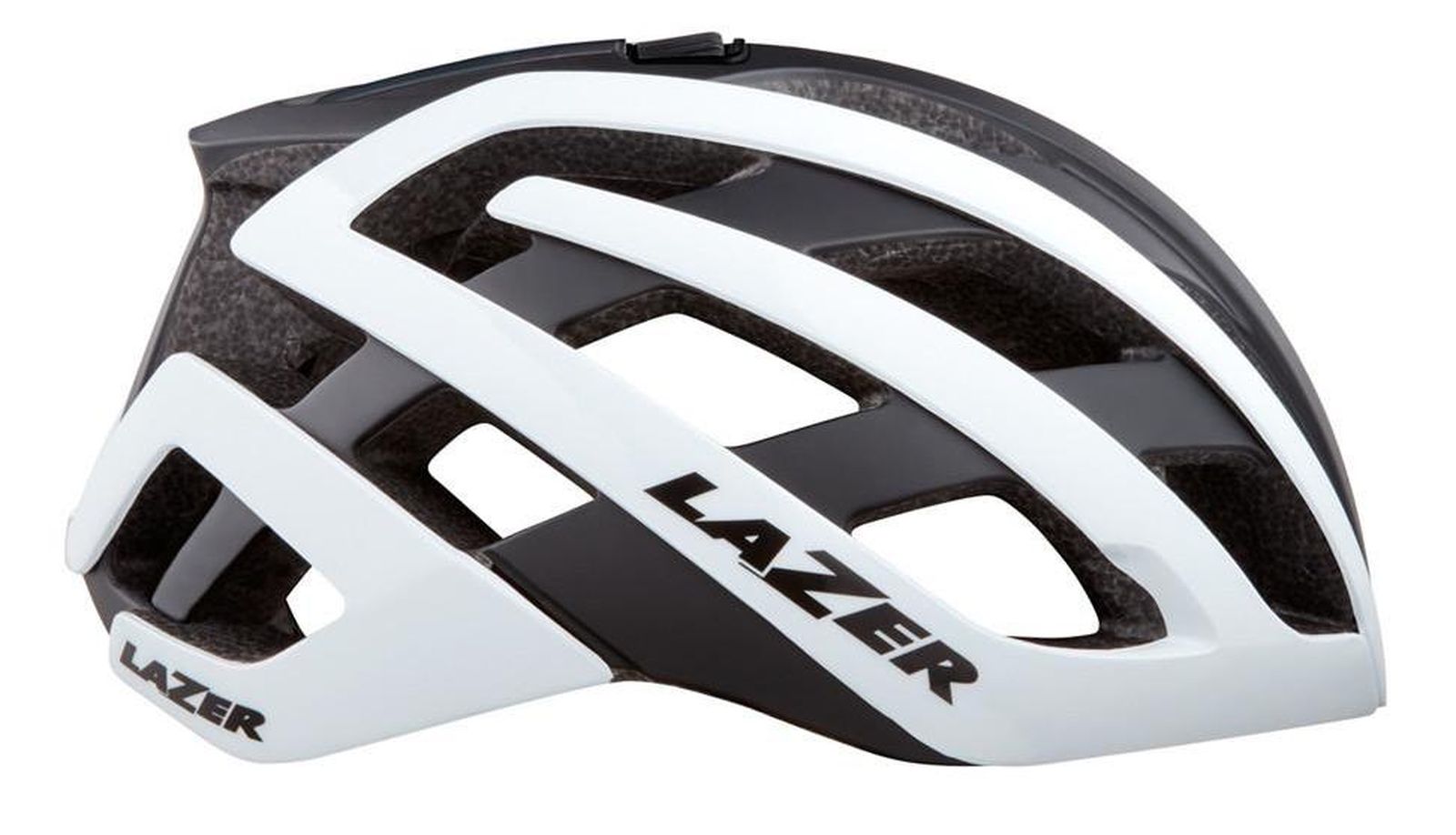 Available in three sizes and four colorways, the Lazer G1 MIPS helmet tops the charts as the safest helmet on the market according to Virginia Tech. This ultra-light breathable helmet is the lightest helmet Lazer makes, at only 235 grams. You can opt to add a bit of weight with thicker helmet pads or stick to the included weight weenie-friendly set. Twenty two gaping air vents make it great for climbing on hot days. (Check our G1 review here) 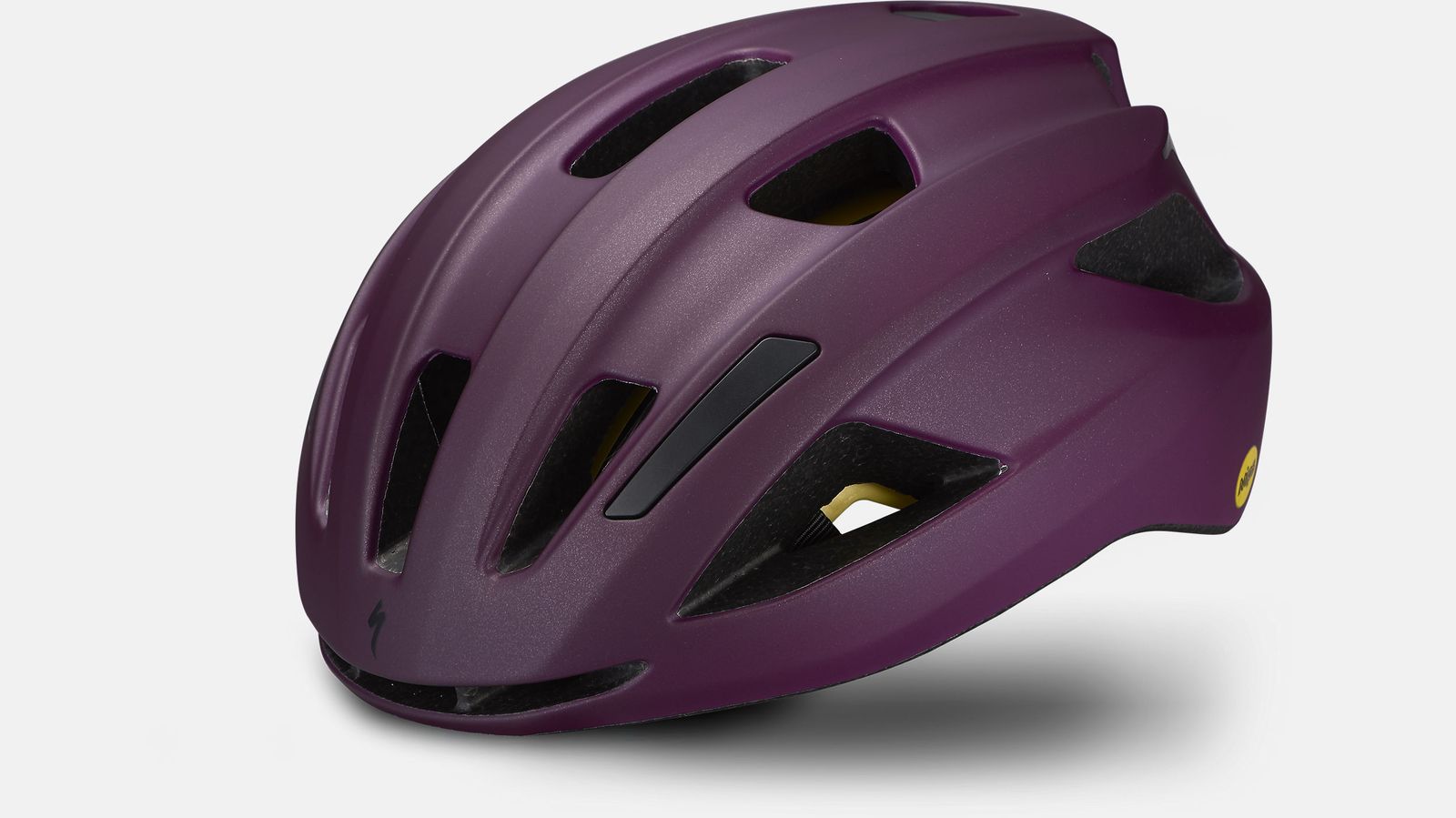 The second helmet on Virginia Tech’s rankings only drops 0.4 in the STAR score but a whopping $190 in price point. At 355 grams, it’s heavier than the Lazer. It also doesn’t have the same ventilation, but it is quite breathable. We like that it comes in seven colors—some basic, and some a bit more funky, like the light lavender option—and three sizes.

The Lazer Tonic MIPS helmet is the more budget-friendly option for those who like the G1 but don’t have the cash. Weighing in at only 280 grams, it’s available in two colors (black and white, nice and simple!) and three sizes. 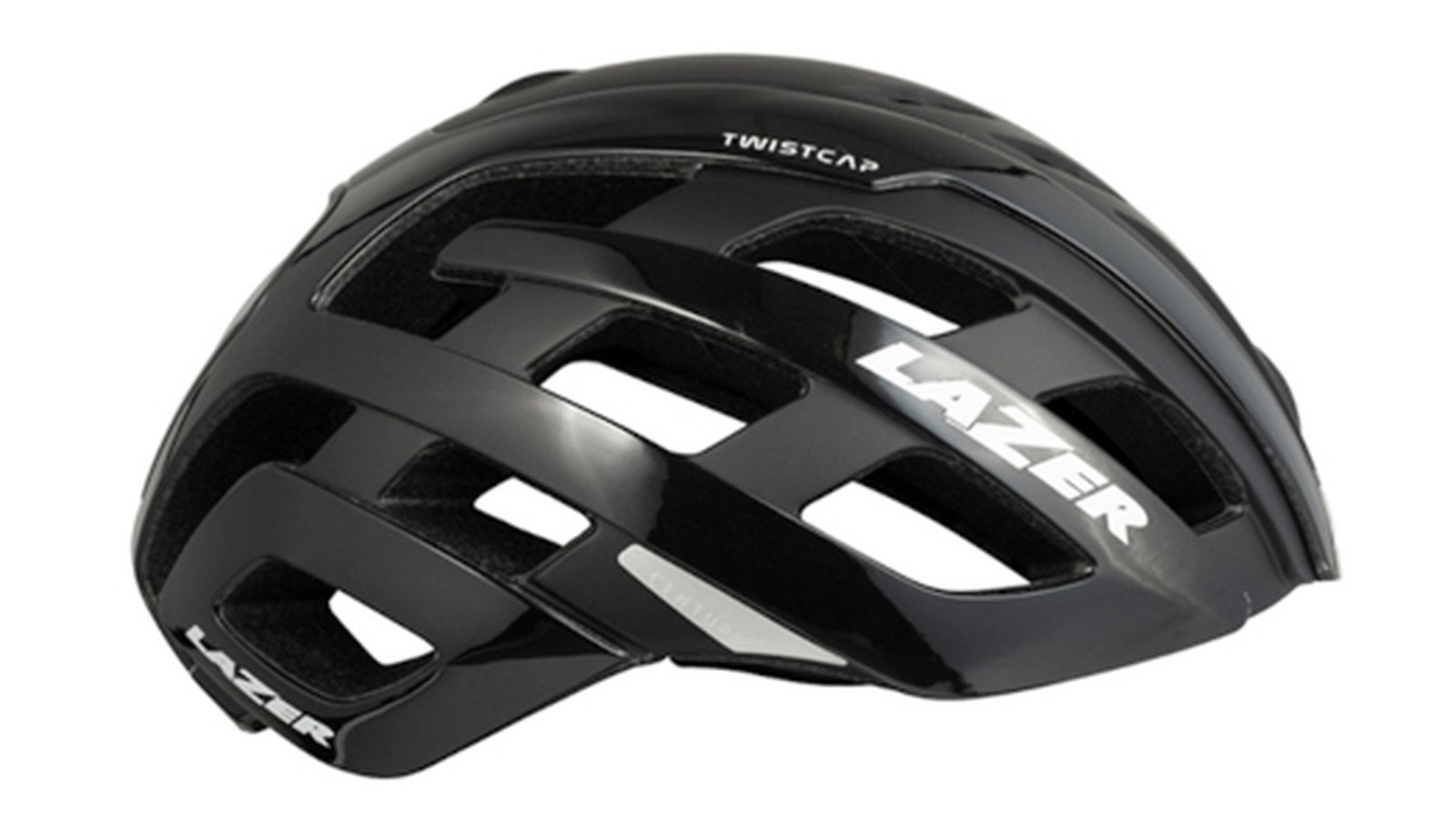 The Lazer Century MIPS comes in three sizes and four colorways and offers a funky trick: With a flip of its magnetic cover, it goes from being well-ventilated to ultra-aero as the central vents close over. It also has an integrated rear light. 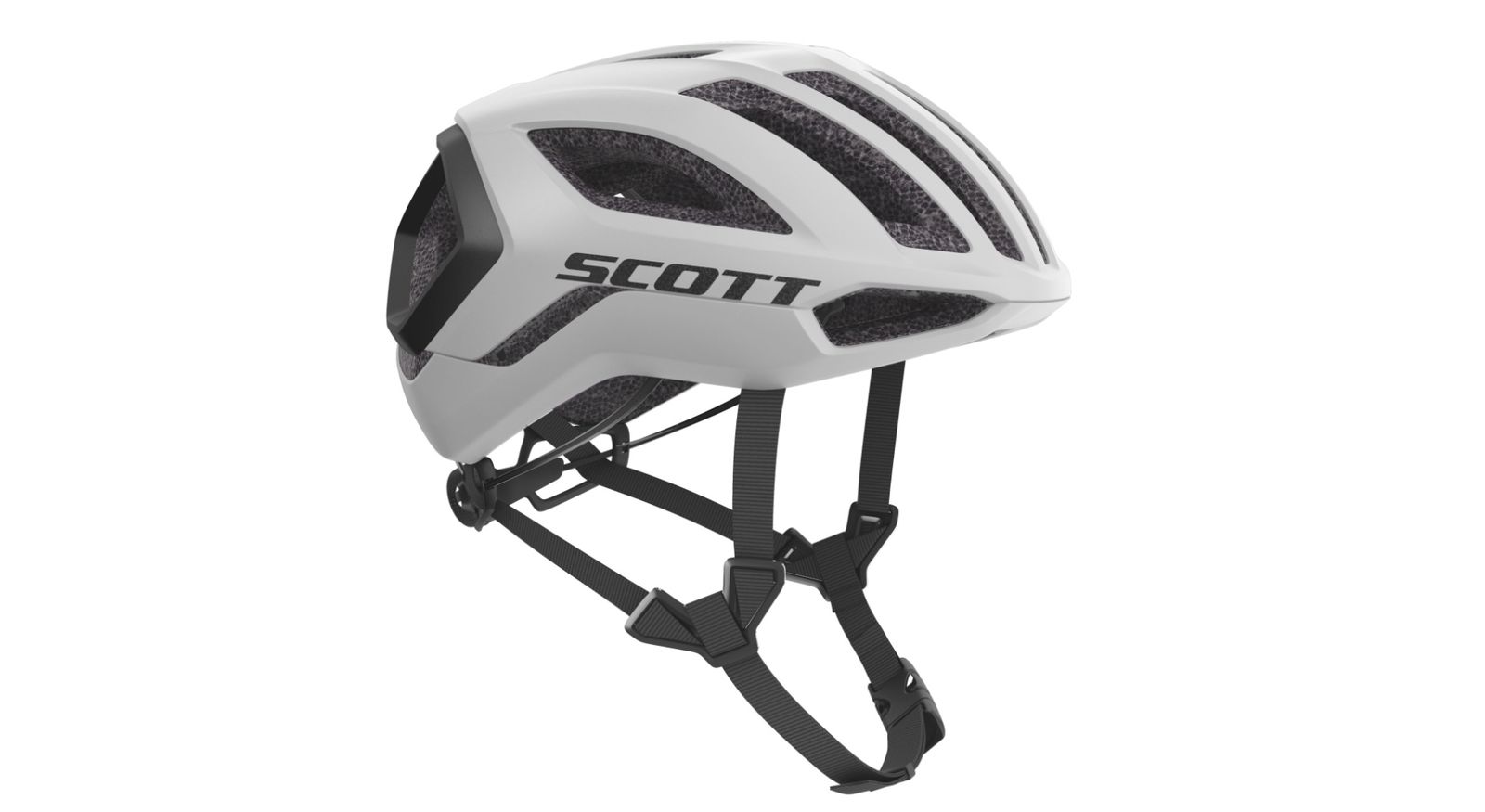 The SCOTT Centric Plus (MIPS) helmet is only 220 grams, making it the lightest on our road helmet list. It comes in seven colors, including a unique reddish-brown, and three sizes.

It’s not surprising that the Sweet Protection Trailblazer MIPS helmet has the lowest (best) STAR score of the bunch, outranking the top road helmet in terms of safety. That’s likely because mountain bike helmets are designed to provide more coverage, and are (slightly) less concerned with weight or ventilation. Available in five colors and three sizes, the Trailblazer has the best rating score that Virginia Tech has ever published for a bike helmet. (This is definitely an enduro-style helmet, so cross-country riders might find that it’s a bit of overkill and not as breathable as other models.) 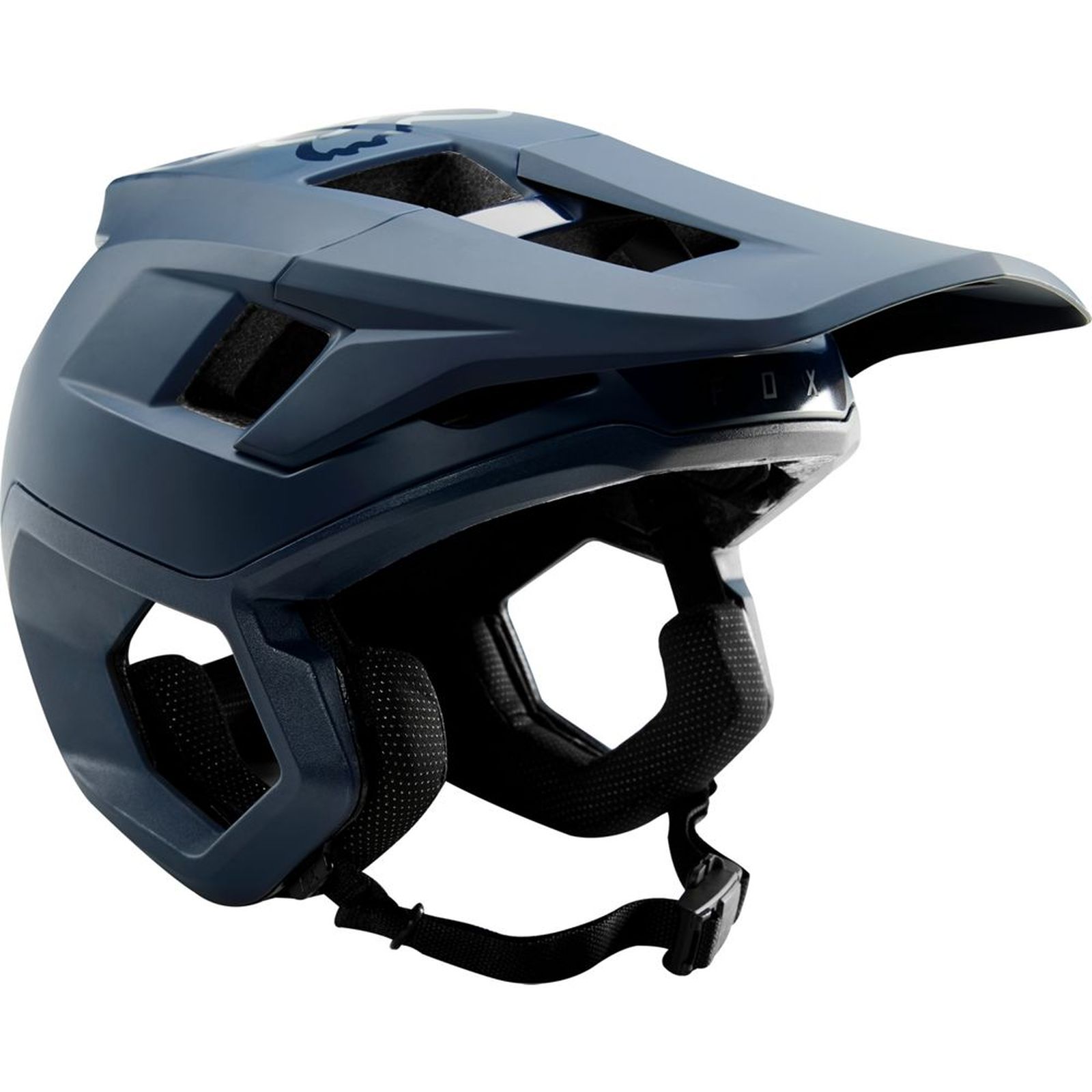 The Fox Dropframe Pro MIPS helmet comes in four sizes and it’s definitely a trail/enduro helmet, with much more side coverage than an average helmet. It’s heavy as well -750 gram- but it still provides plenty of ventilation. It comes with extra pads so you can fully customize the fit to your face and head. 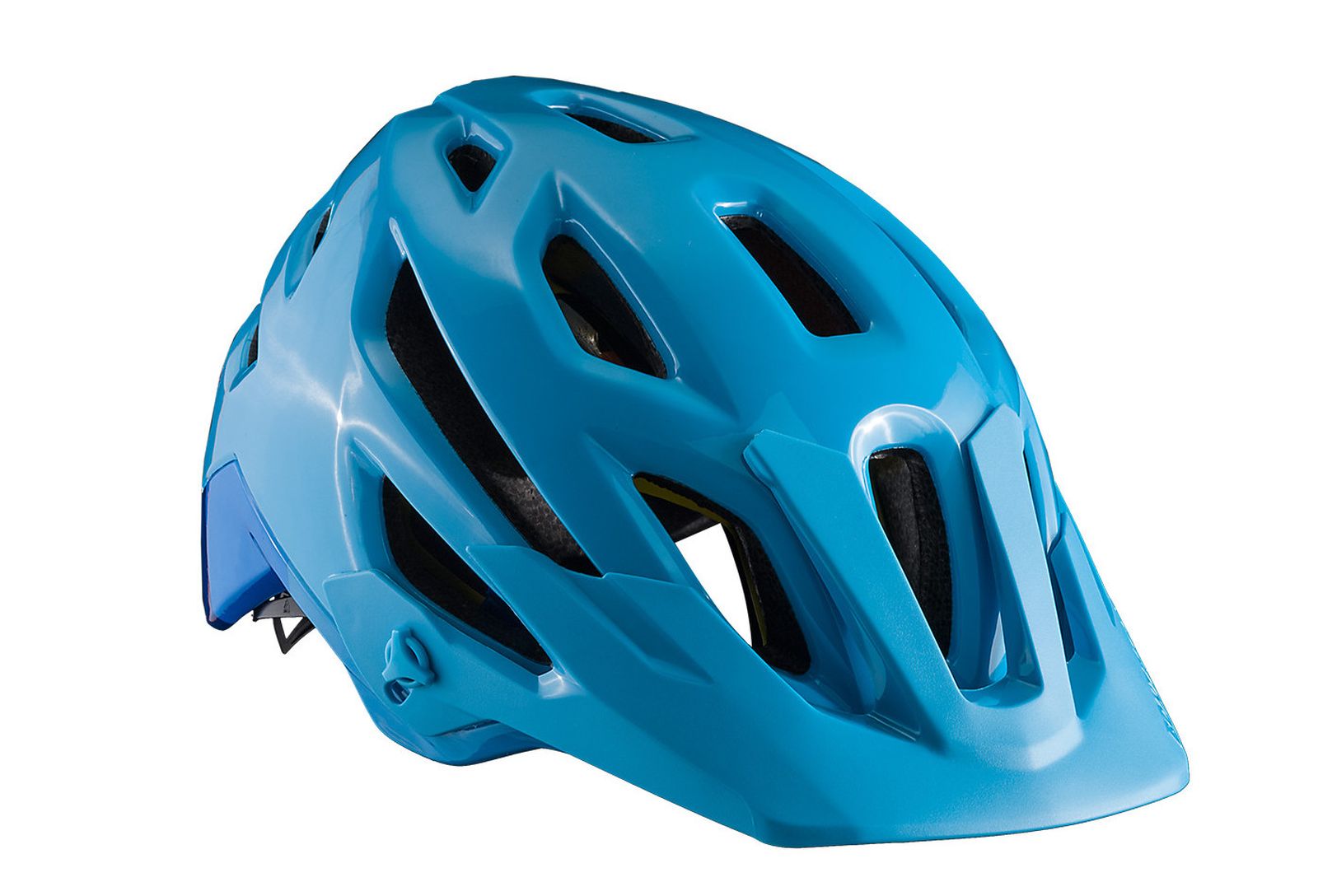 The Bontrager Rally MIPS helmet comes in five sizes, and is one of the lightest helmets in the mountain bike rankings. At 330 grams, it weighs only a bit more than most of the road helmets. It has a clip-on visor and a bit more side coverage than a road helmet, but retains the aerodynamic advantages. Bontrager also provides a one-year crash replacement guarantee. 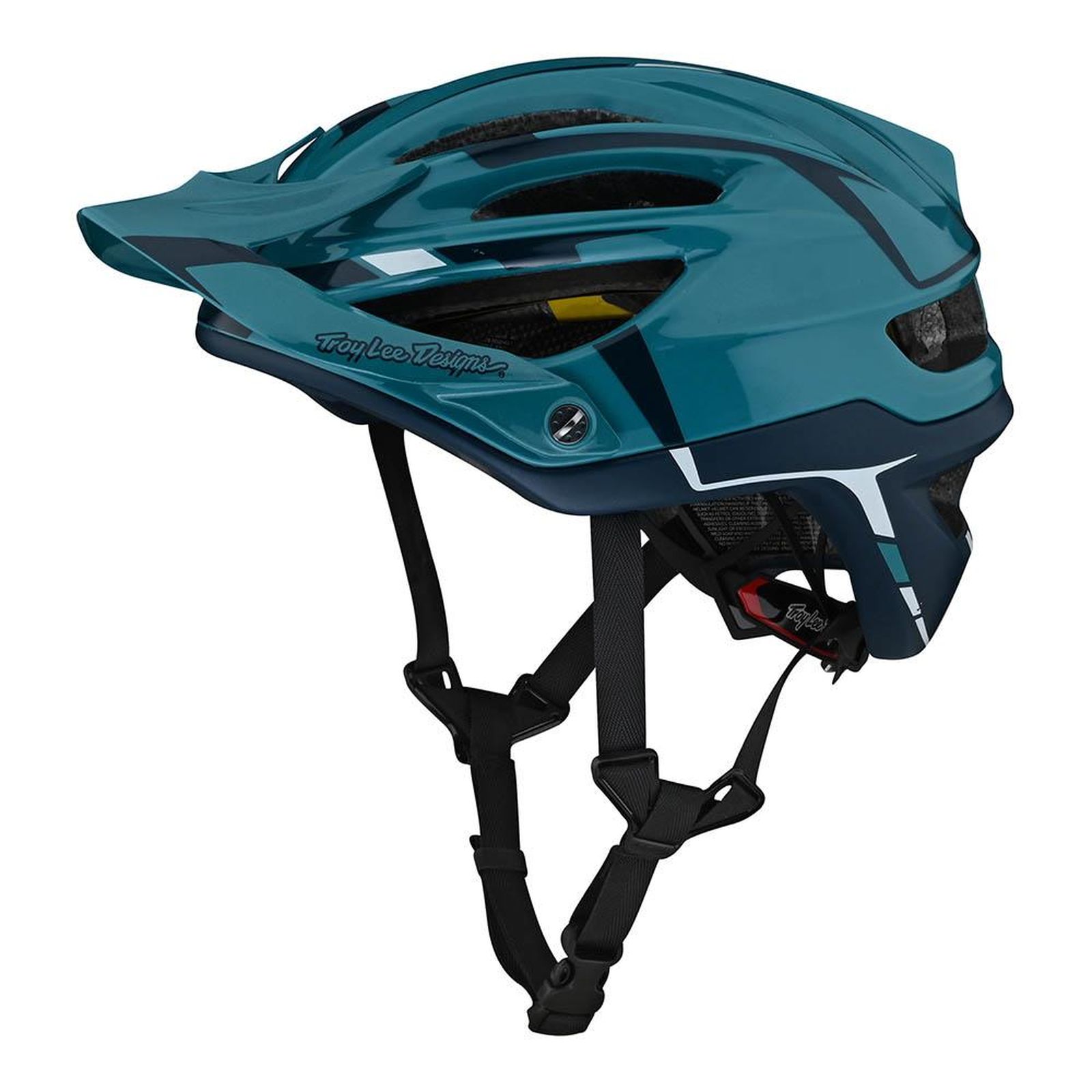 The Troy Lee Designs A2 MIPS Decoy helmet comes in five colors and three sizes, and is an “all mountain” helmet. That means it’s ideal for both pedaling uphill -thanks to its breathability and relatively light weight- but it’s burly enough for an enduro-style descent.

Available in three sizes and eight colors—including this cool surf blue and a funky komodo green—the Scott ARX Plus helmet is designed to go from the mountain bike trails to the road, making it the most “XC” of the top helmets. And it weighs just 270g (claimed). It features MIPS protection inside, a removable visor, and enough ventilation that it makes a solid all-around helmet for someone who loves to mountain bike, but also rides road or gravel bikes. Bonus points for being very affordable! (Note: This one is actually 6th on the list this year, but 5th place is no longer available, so we moved Scott up a notch.)

That’s right, the second helmet in the Road Helmet category is also the top Budget helmet at only $50. Available in seven colorways and three sizes, the Specialized Align II with MIPS is a perfect helmet for any rider who wants good looks and top safety ratings in a really affordable bicycle helmet.

For more of our favorite helmet options, check out our list of Best Women’s Cycling Helmets here.

Are you paid from Lazer cause 4 of them are from same company, where is Kask, Giro etc

Hi Walkerstalker44, No, we were not paid by Lazer – you can find Kask and Giro on the complete list here: https://helmet.beam.vt.edu/bicycle-helmet-ratings.html

There are affiliate links to the helmets we posted in this article that help pay for the work we do here, which allows us to continue to provide all of the killer cycling tech and news here to you and all of our other readers for free.

Is there a full list of the 123 helmets tested?

Great to see the Lazer Tonic MIPS do well. It’s an affordable helmet that betters many of Lazer’s more expensive offerings. I’ve had a non-MIPS version of it since 2016, and it’s one of the best helmets I’ve had – and much better ventilated than the Blade MIPS.

Nice to see helmets rated on what matters most – safety, instead of the normal reviews about airflow, weight etc etc.

Its amazed me that it took so long for the safety aspect of a helmet to become one of the metrics that its judged on…. all it takes is for one of your riding buddies to get a bad concussion to see how important safety is!

MTB is going full face/enduro style helmets. If you aren’t wearing one, you are only fooling yourself. The above don’t include any facial protection. So how can they be the “safest” helmets?

For what region are the helmets been tested. (America, Europe, ..) Not all the brands are included in the test. I miss Abuss, Oakley, Mavic, kask helmets. Are there more test coming?

I like the way the helmets are tested and the information that has been giving of all the aspects of the helmets.

Virginia Tech only tests helmets that have the CPSC (US Consumer Product Safety Commission) certification. This means only helmets sold in the North American market are included in their ranking results. Note that the CPSC certification is a more stringent standard than the CE (Europe) certification.

Jaw protection is unfashionable but IMO it shouild be an option. In fact IMO, it should be compulsory. Any full face helmets, BMC style?