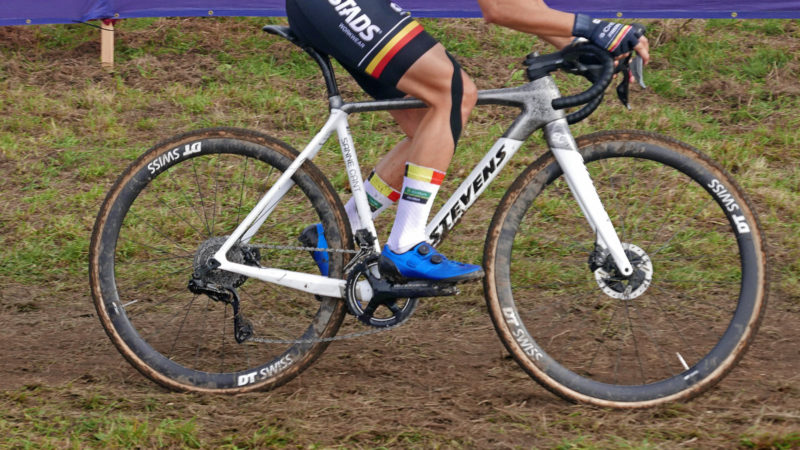 Stevens revamps one of the winningest cyclocross bikes of all time with an all-new carbon 2022 Super Prestige that we spotted Sanne Cant and about a dozen other pro crossers racing on the UCI World Cup in Tábor yesterday. Subtly adopting the integration that evolved from aero road bikes, the new Stevens CX has a lot of small updates throughout to make a more modern cross bike… 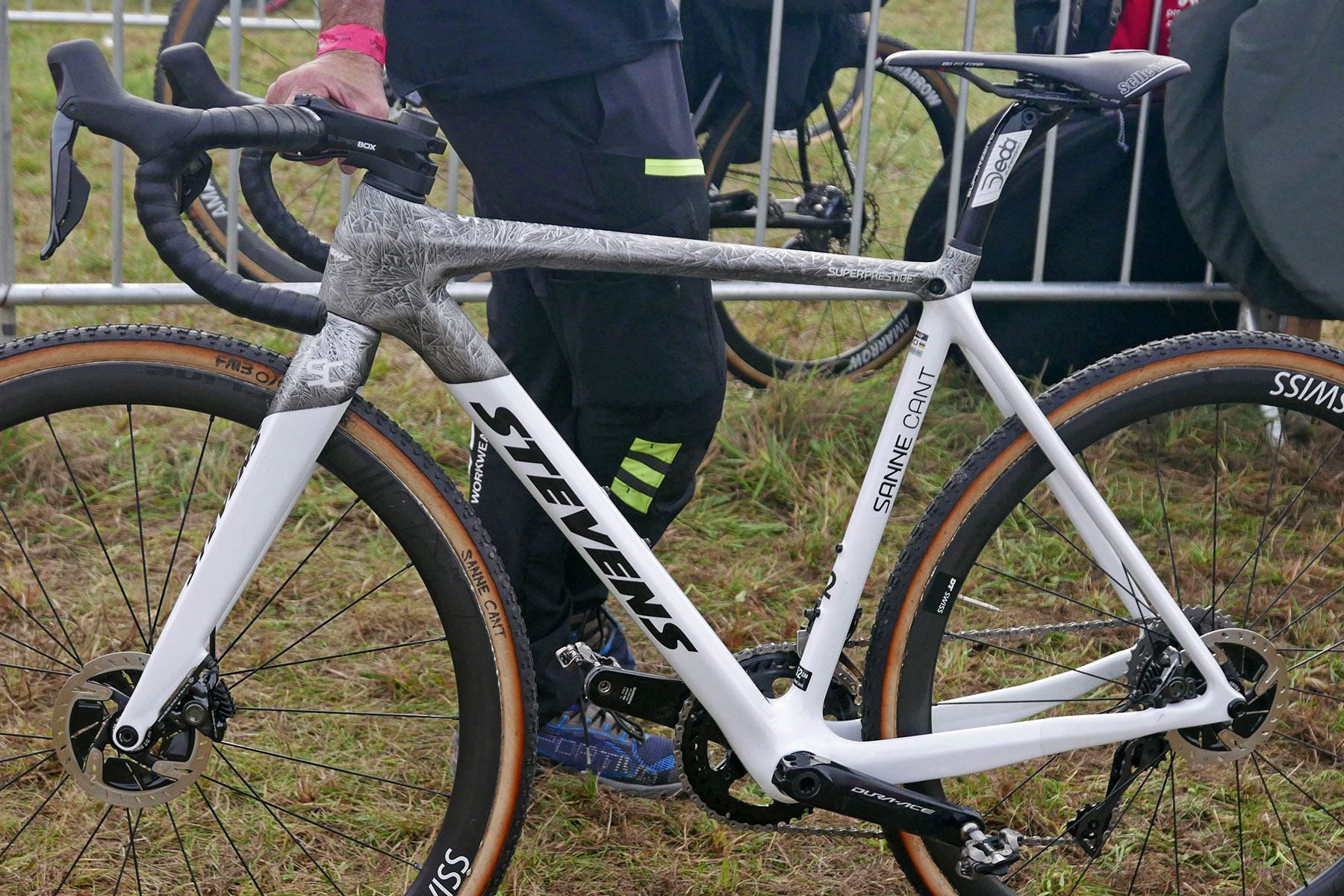 all photos by Cory Benson

The Stevens Super Prestige is one of our most-covered cyclocross bikes. It certainly didn’t hurt that we kept seeing new rainbow-striped versions for a few years in a row. Now the time has come to revamp the popular cross bike – with a new carbon SL frameset. And Sanne Cant gets a nice custom white and frost gray version for her 2022-2023 cross campaign. 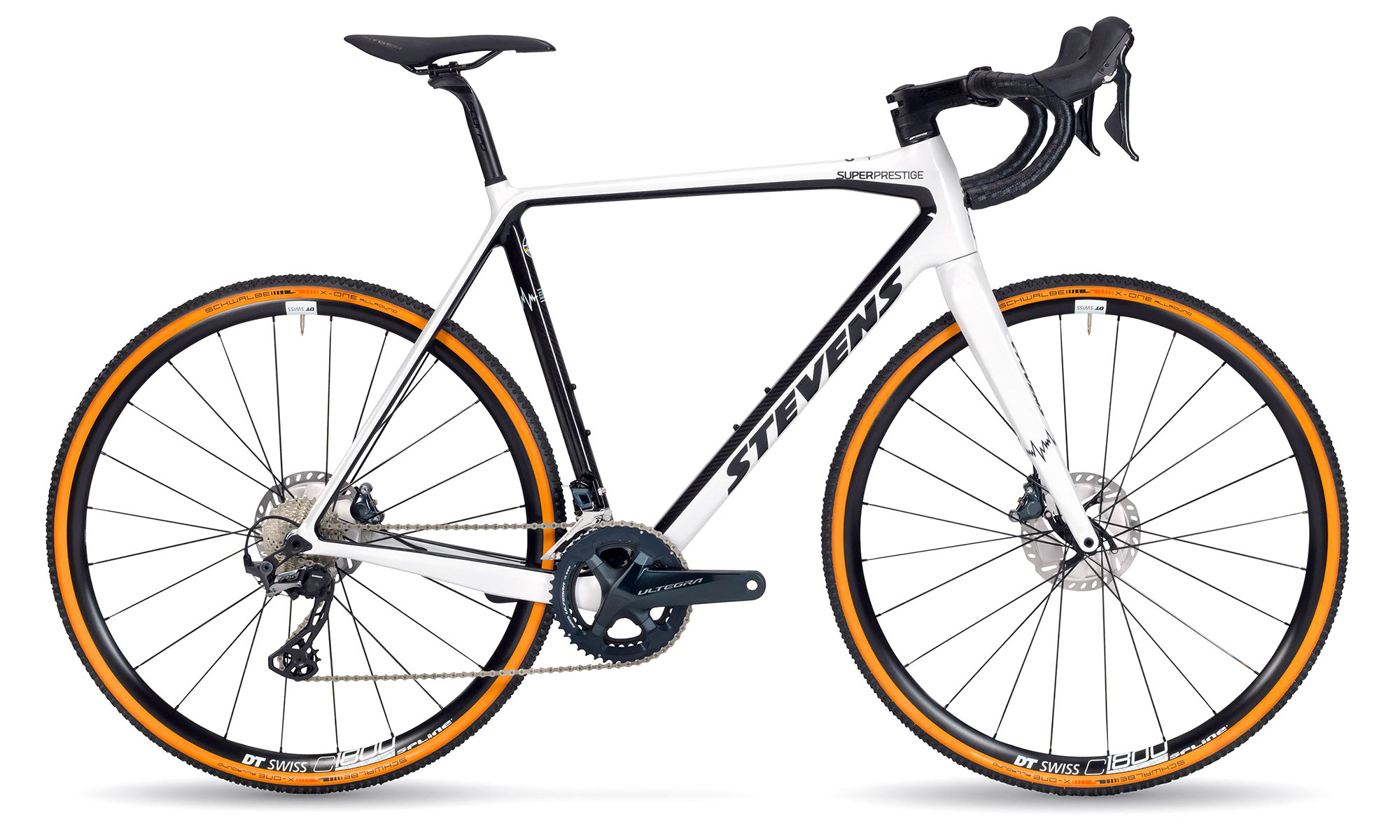 The most obvious change is the lack of any external cables, with everything moving internally through a 1.5″ headset. Stock bikes apparently use various FSA ICR/ACR systems. But pretty much every race bike we saw this weekend featured a Deda system with their new SuperBox stem that gets the cables inside neatly, but retains full cockpit adjustability and easier servicing.

To make everything fit and get your cables around the headtube, the new Super Prestige gets a wider, more angular headtube shape that has the extra bonus of adding more steering stiffness.

Stevens says the result is also a more aerodynamic setup with the cables less exposed to dirt, water & mud (not really an issue with hydraulic brakes & electronic shifting, though). A CX-specific added benefit is that the cables are also protected out-of-the-way in a crash or even just impossible to get tangled up when running shoulder-to-should with other racers. 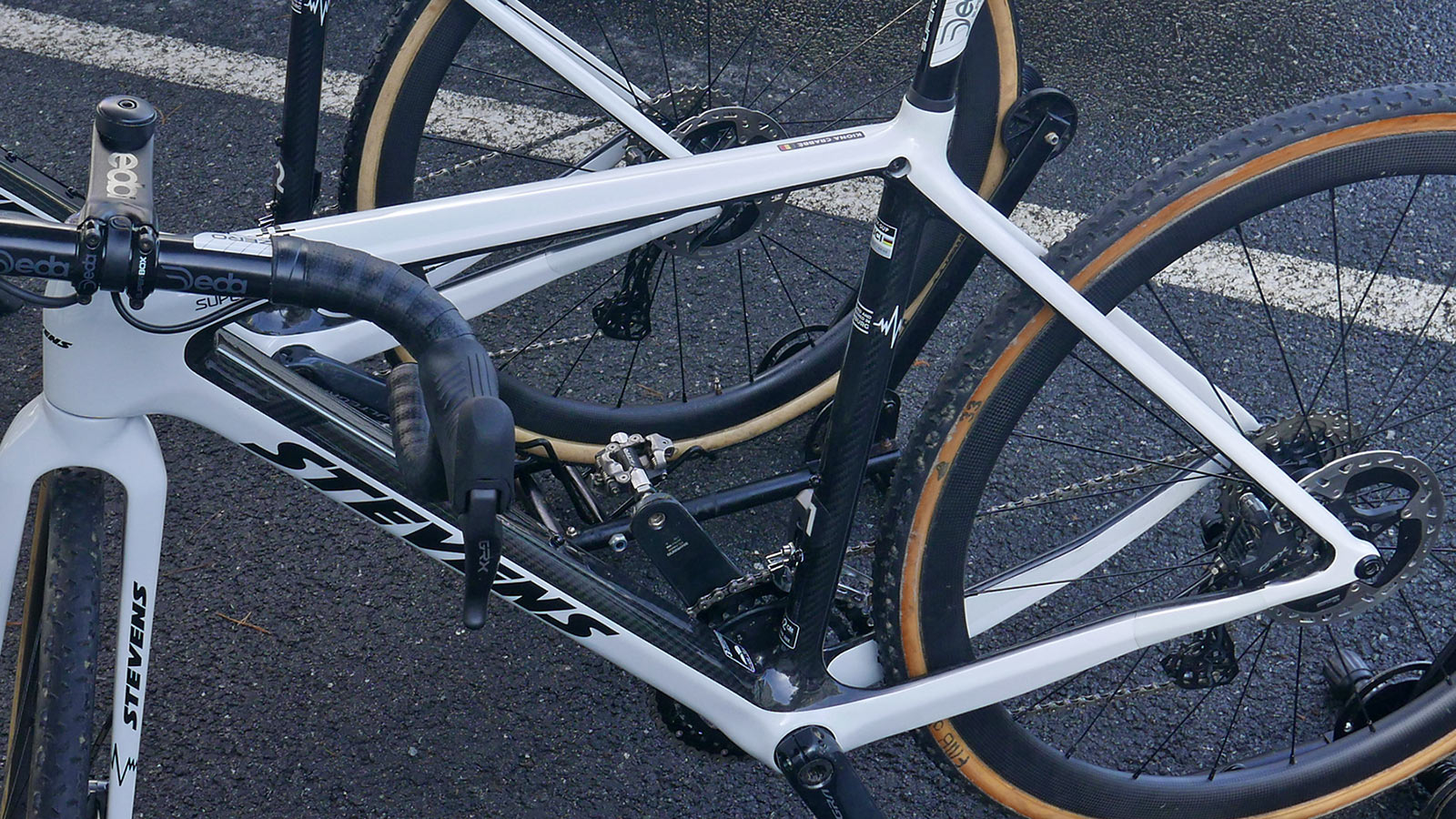 Carrying on the deeper integration – and why we lead with so many non-driveside photos of the new bike (gasp!) – the new Stevens Super Prestige also moves to a hidden, integrated seatpost clamp that is only visible from the lefts side of the bike. The new expander clamp sits inside a pocked in the frame’s carbon seat cluster with a wedge-style clamp inside.

This allows for a small rubber seal around the seatpost at the top of the seattube to keep water and mud out of the frame. We did spot one or two bikes with a piece of electrical tape to further protect against water ingress. But maybe more interestingly, we did NOT see any extra seatpost clamps, suggesting no issue with the saddle dropping even during repeated race-addled-brain flying cyclocross remounts. 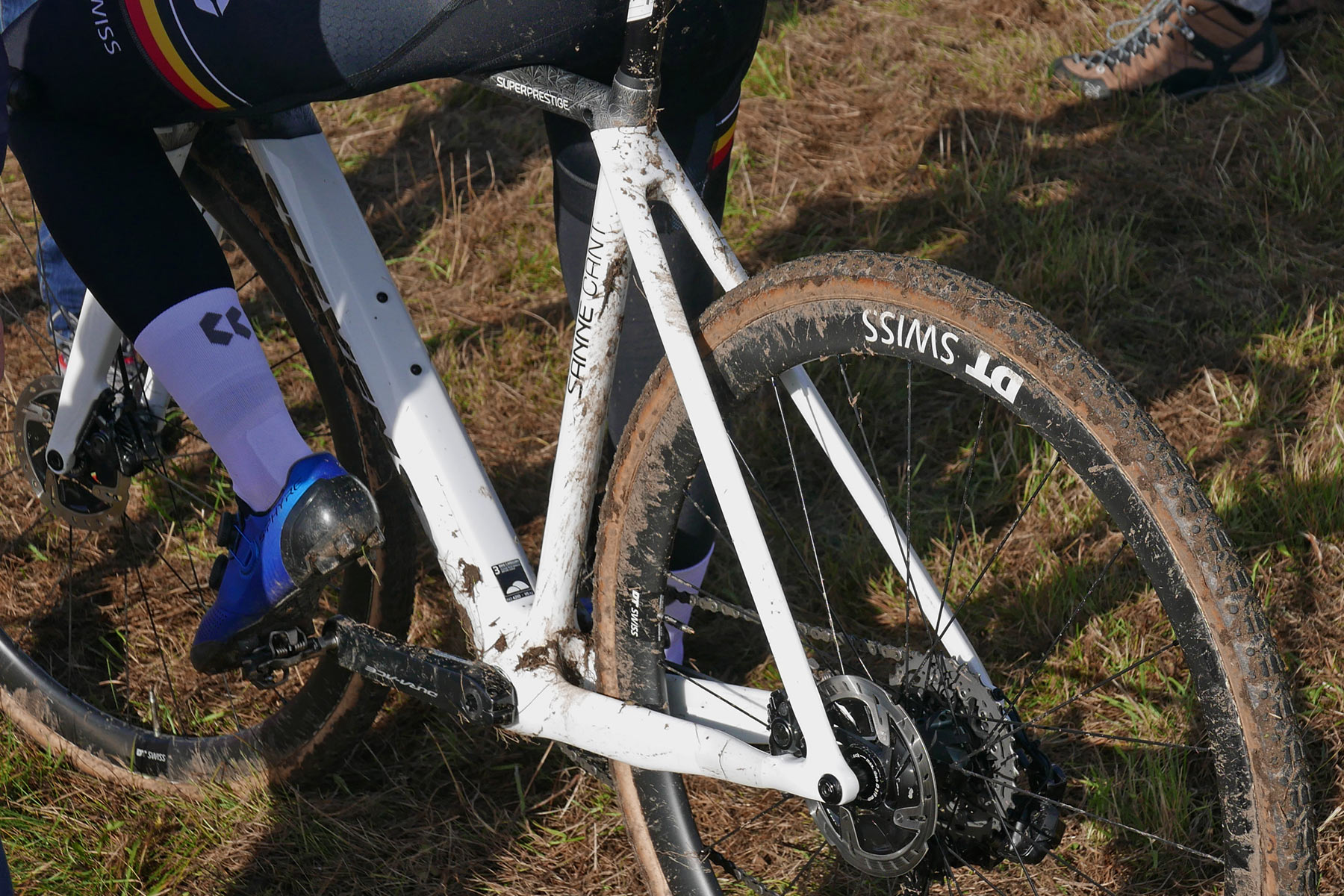 Out back, the seatstays of the new bike do meet a bit earlier at the seattube than before and the chainstays have a slightly revised taper. But all in all, it looks like you still get a rear triangle prioritizing stiffness, snappy handling, and offering plenty of CX World Cup-ready mud clearance.

No updated word on frame weights, but the complete bikes all run between 8.1-8.3kg with mid-spec alloy wheels suggesting the frame isn’t ultralight. 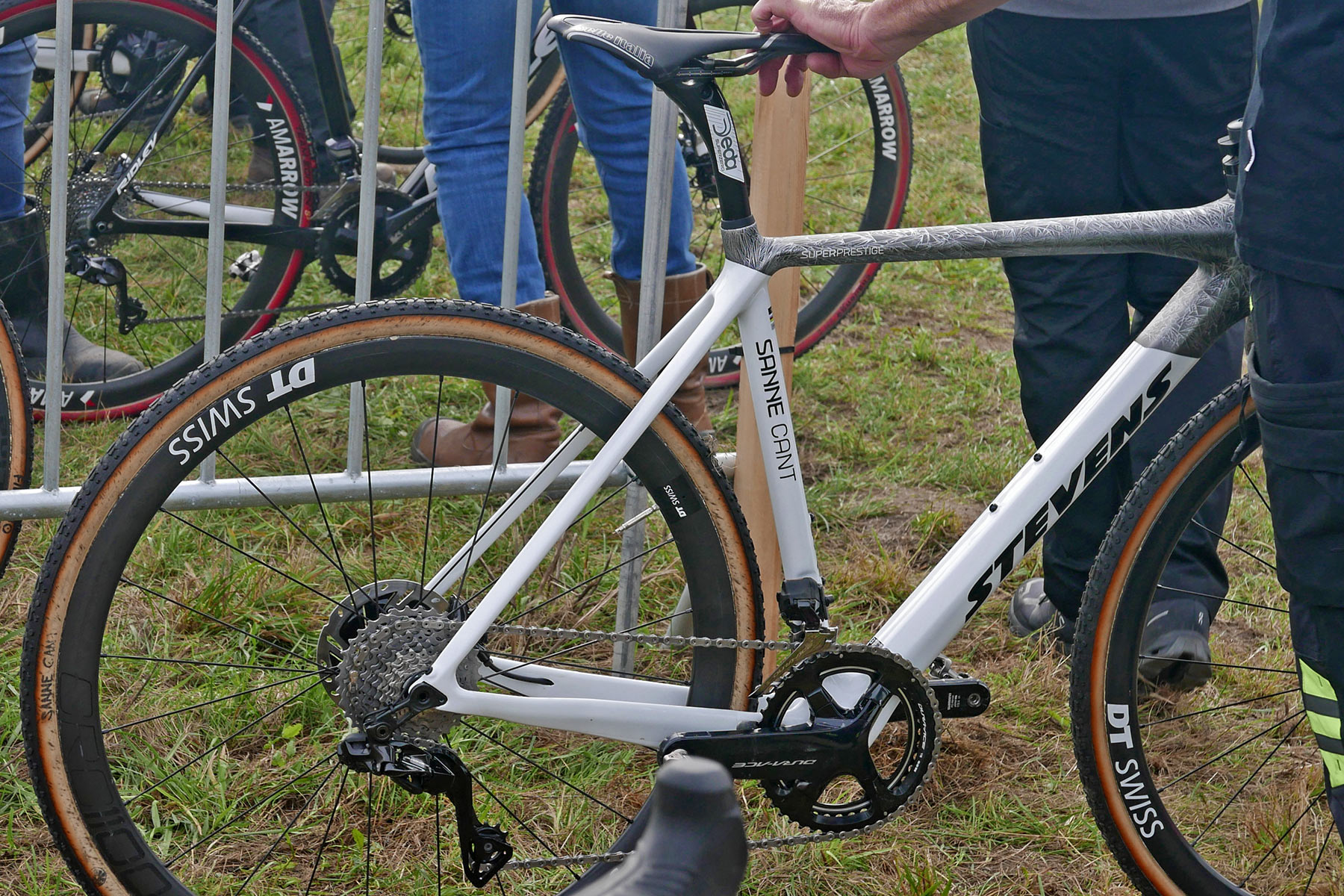 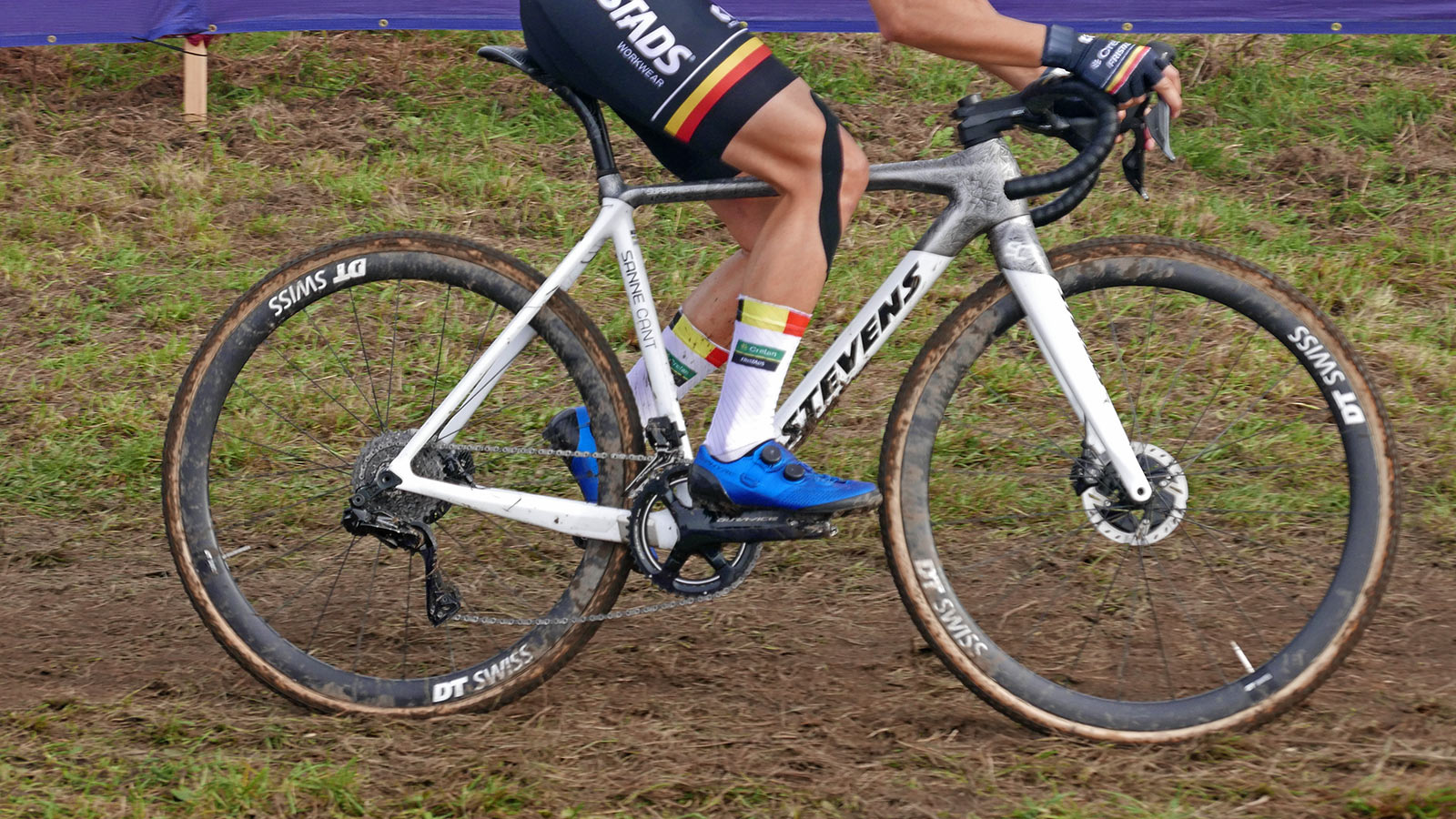 Up front we can see a bit of updated fork shaping too, with smaller legs that taper more directly to the front axles vs. the kinked offset of old that seemed more reminiscent of curved steel fork blades.

Cant wasn’t the only one racing the new bike, several other riders and other teams gave us more views of the revamped cross classic. 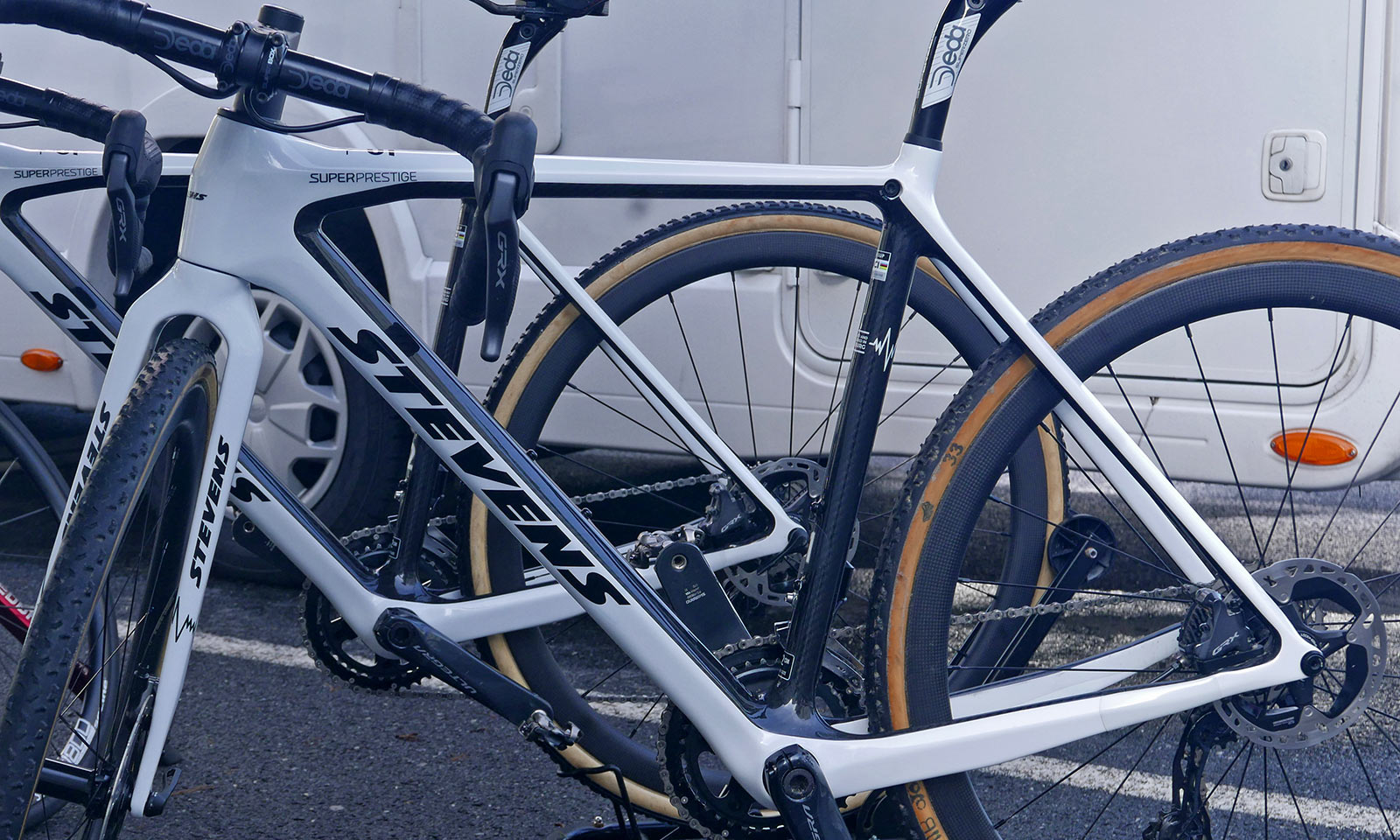 Cant’s fellow Belgian U23 teammate Kiona Crabbé raced this more basic white & exposed carbon of the 2×11 mechanical Super Prestige with the elites, also giving us a good look at the wide, boxy fork crown that looks otherwise unchanged from the previous generation, of course minus any brake cable routing port just under the headset. 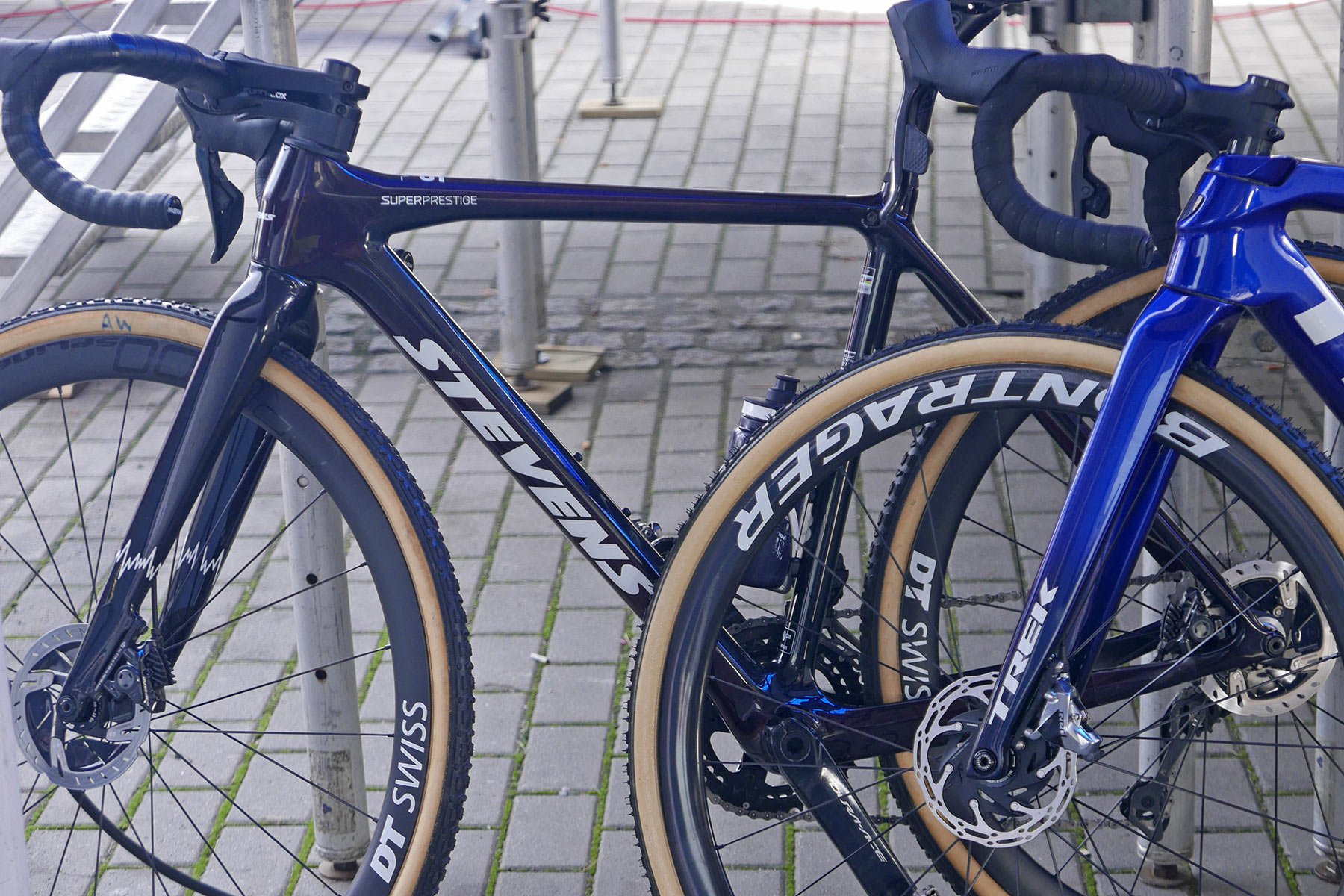 Annemarie Worst had the best elite finish at the Tábor World Cup, placing 3rd in the women’s elite for her 777 team – racing on the stock Dark Lava Red paint scheme of the Di2 model, which almost looks dark purple or black in the shadows. 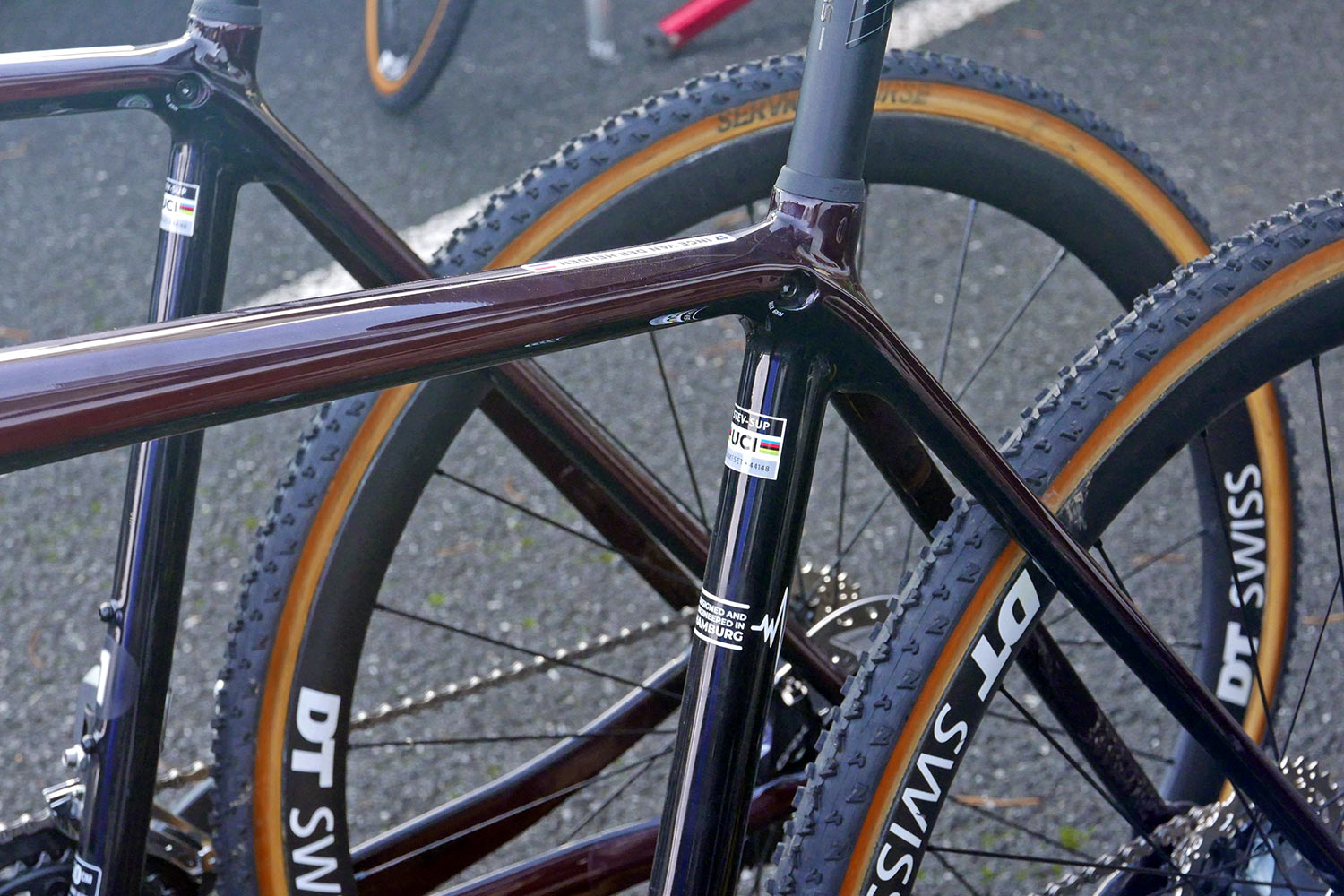 Two more of Worst’s fellow Dutch 777 teammates rounded out in the women’s top-ten on the new bike with its integrated seatpost clamp & routing. 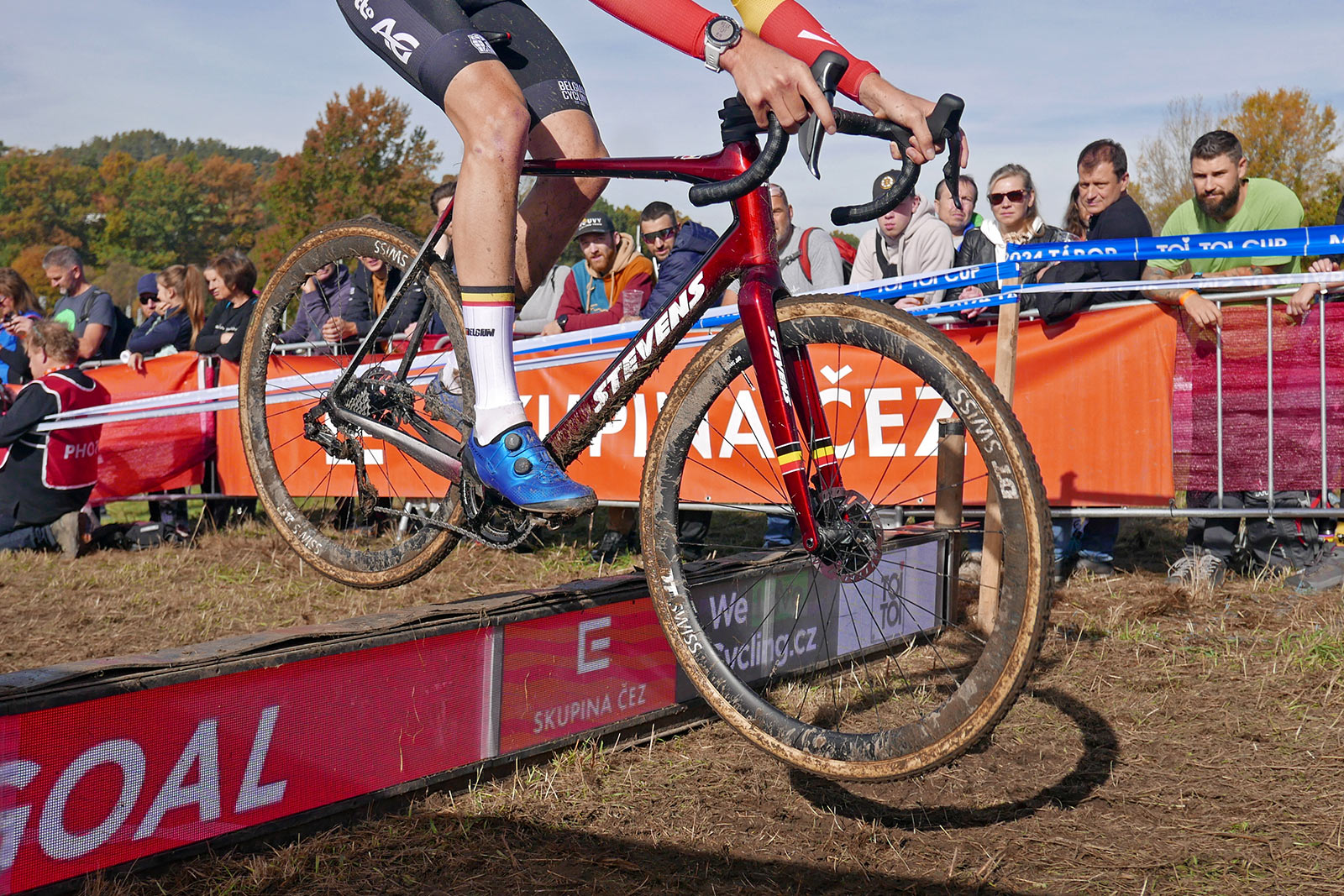 Back over to Cant’s Crelan-Fristads team, a couple of their Belgian U23 men also had unique design schemes. Fellow national champ Emil Versrrynge placed 3rd in U23 on a standard Dark Lava Red bike with some Belgian flag tweaks to his bike. You can see that the paint really pops in the sun, revealing a bit of UD carbon fiber texture beneath the slightly transparent finish. 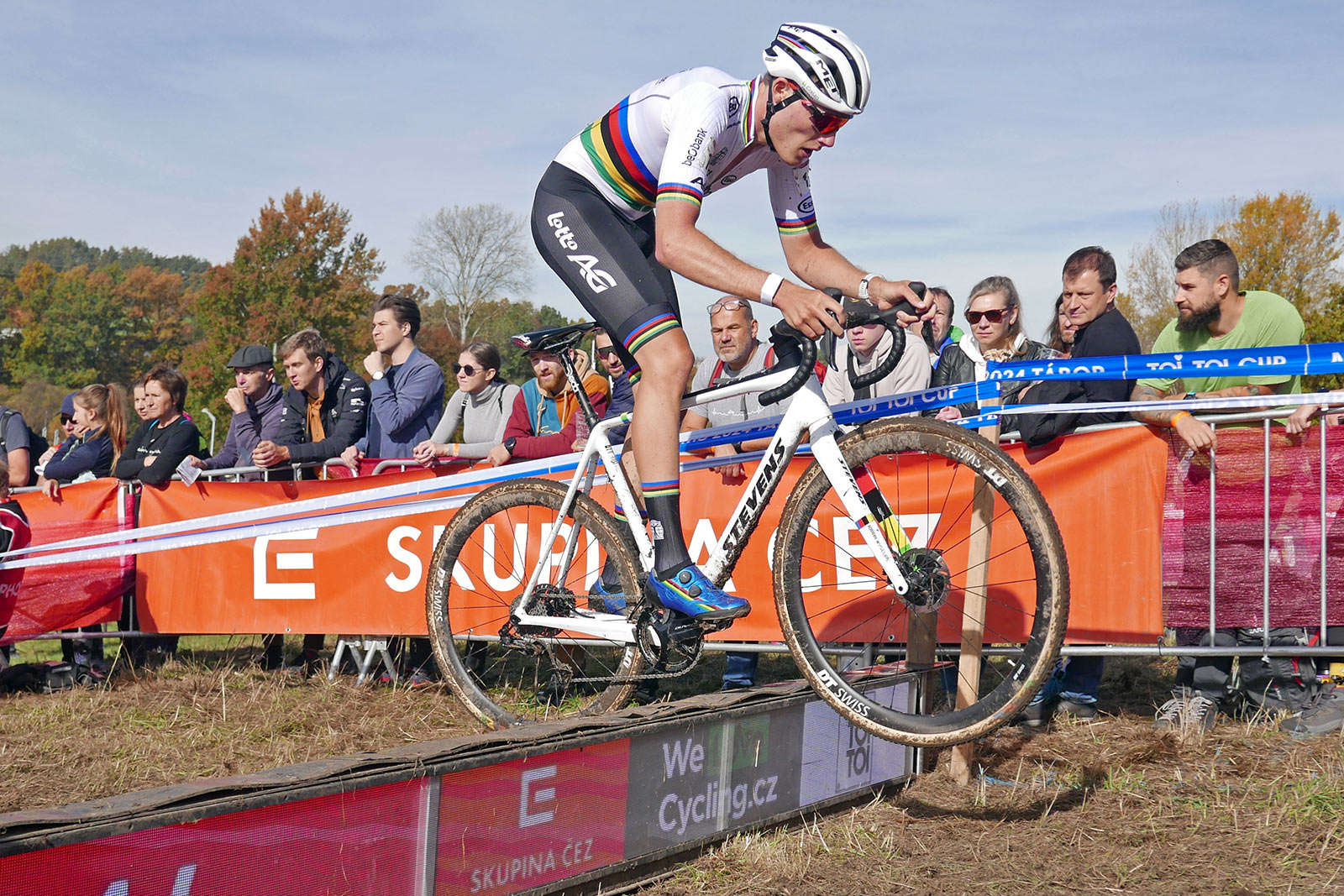 And current u23 Men’s World Champion Jordan Wyseure got a tasteful white and black bike with rainbow stripes to match his jersey – or rather to match his skinsuit, shoes, socks, helmet, and custom tubulars.

Thanks for the detailed write-up including the photos, Cory!

I think this is a pretty cool frame and appreciate the cross-specific features like the seatpost rubber boot. It seems well though out and executed.

No one importing them into the USA at the moment (AFAIK) which is a bummer.

White is a terrible color for any bike, let alone one that sees dirt/gravel roads. Trust me on that.

I like how it’s 1/3 the price of the cervelo. Cable routing is still dumb, but that seems to be the cool thing these days