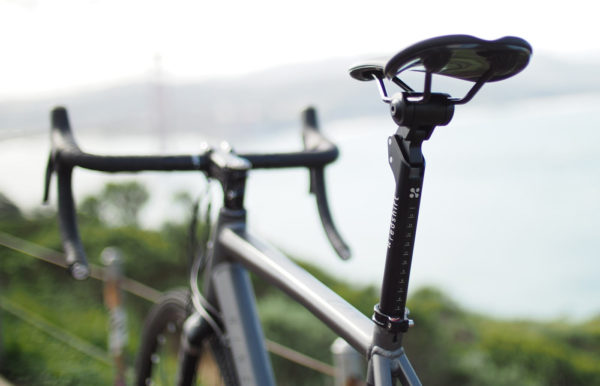 There have been a long line of suspension seatpost designs, some more successful than others. Things like the USE post had a following among mountain bikers in the early days, followed by the Thudbuster. More recently, there’ve been the Specialized CG-R and Canyon/Ergon VCLS (found on that wild new Canyon gravel bike) posts. Now, Redshift Sports is bouncing a new idea for taming the bumps with a tunable design. 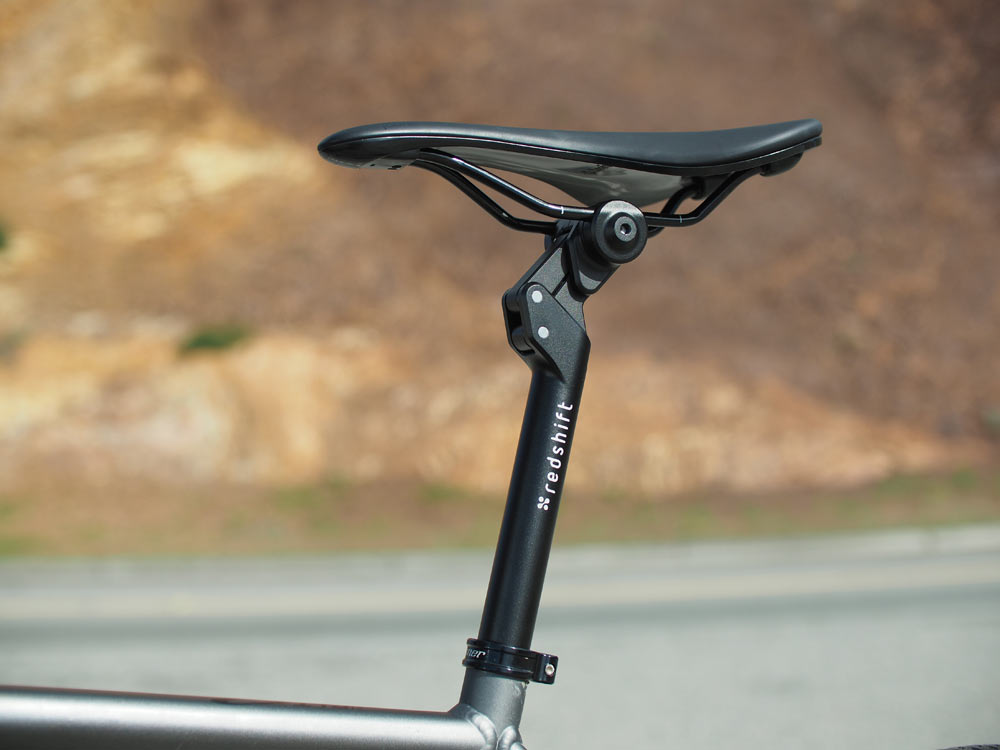 What separates the new ShockStop Suspension Seatpost from others is both the angle and ability to tune it. Where telescoping posts can suffer from stiction because the angle of the bump and movement are not parallel, linkage driven designs or flexible seatposts can move the saddle. But, the former can be heavy, and the latter may not offer much travel. The ShockStop sits between the two and directs the forces the right way to get up to 35mm (1.38″) of travel. 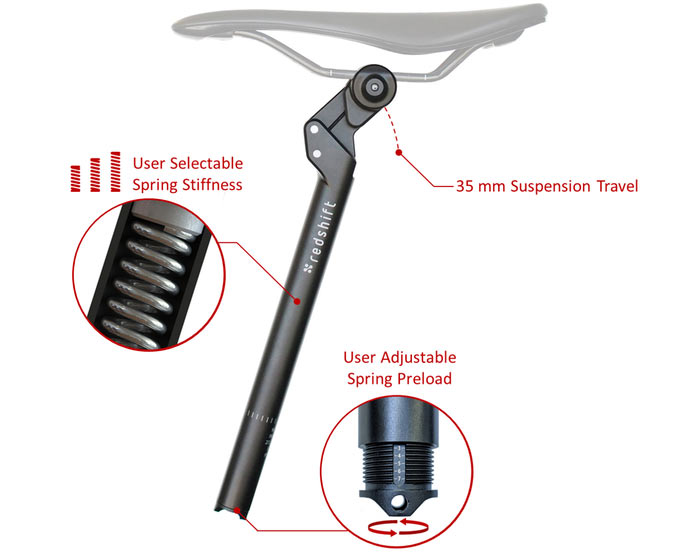 The design lets you choose the spring rate and adjust preload. Co-founder Stephen Ahnert says this lets you set it anywhere from ultra plush with a good bit of sag, up to quite firm for more performance-oriented riding. The result is up to 60% reduction in impact forces and less vibration transmitted to you, so you feel fresher and less fatigued after a long day on the saddle.

It’s a four-bar linkage design, so the saddle stays at the same angle throughout the travel. Full specs are: 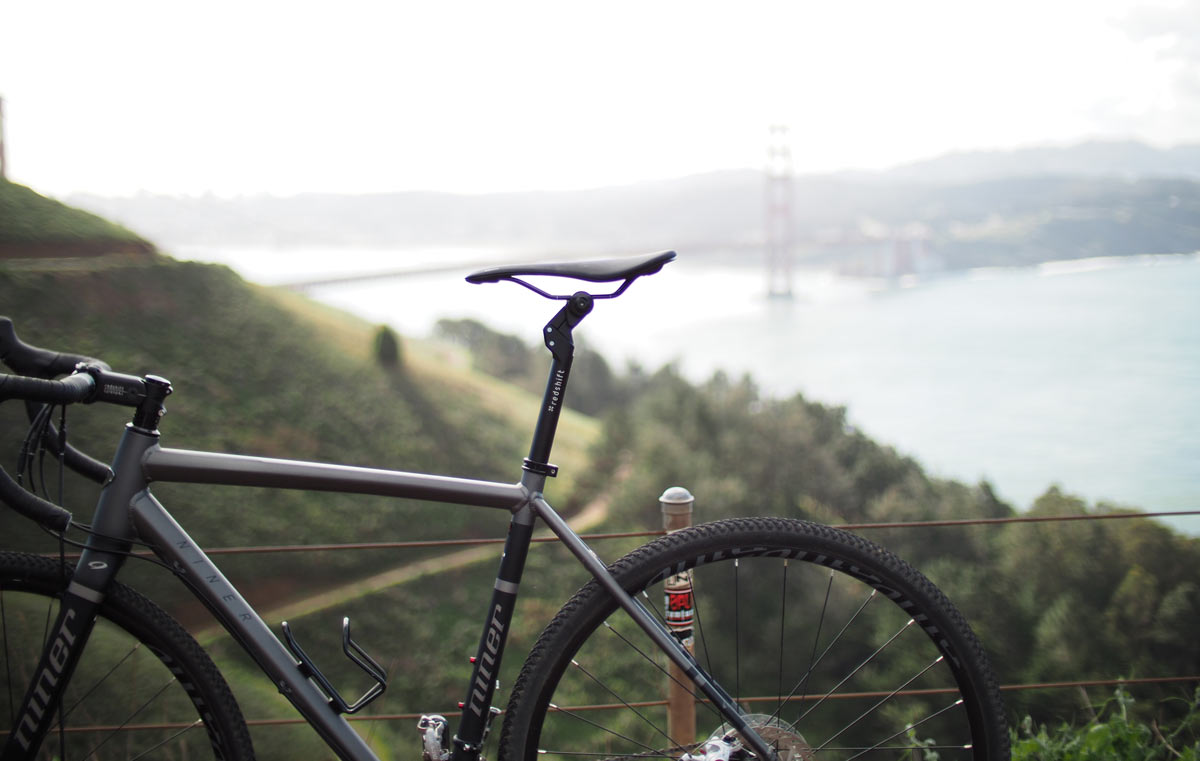 They’re promoting it for everything from road to commuter to e-bike to hardtail mountain bike, but we see this becoming most popular for gravel bikes and long distance events like the Dirty Kanza, etc.

Expected retail price is $199, and if you act quick you can nab one for $139 on Kickstarter. Redshift launched this on April 10 on Kickstarter, and by the morning of April 11 they’d almost tripled their ask and sold out several of the earlybird offers. So it’s fully funded, but there are still deals to be had. Check out the full campaign here.

It’s about the same weight as the Cane Creek ThudBuster ST. They’re all a little heavy. I expect most of the weight in this one is the large steel coil spring. IF they wanted to throw some big $$ at it, that spring could probably be done in Ti.

Which is a copy of the much older Thudbuster linkage suspension seatpost (which may well be a copy of a prior design too?).

Point being, everything is a copy or influenced by other existing products.
There are a handful of linkage suspension seatposts currently on the market.

Redshift isn’t claiming to have invented it. But they have refined it into a very clean and almost invisible design when compared to several other linkage seatposts.

This Redshift post does look cleaner than either though.

Granted it is heavier but SUNTOUR has been making a post like this for years. It’s adjustable and way more affordable. https://www.srsuntour.com/collections/featured-items/products/copy-of-sp12-ncx-seatpost?variant=27528515843

It looks almost identical in function to the Body Float except for one key detail: the Body Float is externally adjustable. It’s nice to be able to just pull over and hit it with a 4mm if it’s too soft or too firm and off you go instead of having to pull it out, get covered in grease/fiber grip, hope you gave it enough adjustment, put it back in, make sure you get your saddle height right, and torque the seat collar to spec before you can take off again.

I wonder why no one has made a carbon version. this company could sell it for $400 and then someone else could come along and sell it for $200 and make a tone of money. Also could you use compressed air and a little hydraulic damper. that would lighten everything up.

Kinekt (Bodyfloat) makes their post with a carbon mast. I have used one for three years, and recently adapted the head to a dropper for the ultimate “ass gimbal.” For those of us with bad low backs, they’re awesome.

I have 2 of the Kinekt posts and they are the best thing for my spine issue outside of riding full suspension around everywhere. If I could get one on a dropper post body, that would be heaven, and heavy, but worth it. They tell me that an official Kinekt dropper Body Float is on the way for the end of the summer, but I’m very interested in how you did it on your own. The Kinekt design obviously lends itself better to a dropper, as the springs aren’t taking up the center of the post. Might get in on this kickstarter for my track bike though, she’s already a heavy beast.

..because that’s simple and cheap, right? 🙂

Interesting they list offset of 10mm at 25% travel which is great but ideally I would be interested in a plot comparing offset vs travel. Does the offset change by 5, 10 or 15mm over the travel distance? A 10mm change in offset is rather large IMO.

As to offset changes, the Thudbuster ST has similar rear arc and tends to keep saddle height with a change in offset.

The nature of suspension directions means you have to give a little to gain a little. Telescoping post have constant offset, but only shorten saddle height. No free lunch as they say.

Especially for some riders on CX bikes or others with smaller tires. Options are good, even if they don’t meet the needs of everyone.

As a long time Thudbuster user the one thing that bothers me is that the bushings eventually wear out and the post has to be stripped down to replace them. Maybe there are bearings on this one instead, but this seat post doesn’t look like it can be serviced, which would put me off straight away, which is a shame as it looks quite neat.

I feel like at this rate, the gravel crowd will be on full suspension mountain bikes in another 2 or 3 years. We’re slowly working our way back to the early 90’s.

Disappointed to see the thread comparing it to the Body Float product as well as the Thud Buster get deleted.

That is weird. Sounds like a valuable comparison to me. Redshift even has a comparison to other suspension posts on their page, directly addressing pros/cons of other models (although it doesn’t include the Canyon/Ergon, which is the strongest contender if weight is a concern to you. The spring rate is not adjustable on the Canyon though so i’d assume the range of rider weights has to be a bit limited).

There was no thread – there was one comment and it just said “body float copy.” It was deleted because it had nothing to back it up. Would you like to elaborate?

Checked it out and their comparison still left out a key detail from the original and curiously missing thread: The Body Float is externally adjustable. For a few bucks and an extra ounce the Body Float gives you not only get the correct diameter post (rather than shimming a 27.2) but you can pull over and adjust your spring on the fly. If you’re talented you could probably do it while moving. The Redshift has to be removed from the bicycle to do any adjustment and that’s no good.

That is a good point about ease of adjustments, however I am curious to get your take on one very related thing. The Redshift comparison list is certainly slanted toward themselves, but that is to be expected from any manufacturer. One point they make that I was unaware of is that adjusting the stiffness on the Body Float will drop the saddle starting point into the travel. In other words, adjusting it to increase the stiffness of a given spring will reduce the available travel, and from the sounds of it, will alter your starting saddle height. You seem familiar with the Body Float, so can you confirm that? If so, it seems like that would detract from the “easy external adjustments” because you’d then need to loosen your seat binder and move your post up to compensate.

I have ridden a Bodyfloat (now Kinekt post) for 3 years. In my experience, adjusting preload only changes how much sag you have in the system. Essentially, at 0 preload, you sag down to a 3. At 2 on the preload, you will still sag down to a 3…but have less sag (positive travel) in the suspension. Preloading to a 3 will mean you have no sag, and just sit on the post like a rigid seatpost. I haven’t experienced any effective saddle height changes once I sit on the bike.

In that Redshift comparison that we have been talking about, they say that when you adjust the Body Float, it will sink down into the travel, which reduces the available travel. Do you know if that is true, and
wouldn’t that mean it also requires loosening the seatpost and sliding it up to compensate, which would partially negate the ease of adjustment?

I don’t understand why you would want to run a suspension seatpost with sag?

Positive and negative travel. Picture riding down a gravel road and hitting a large rock (bikes moves towards you) and then a pot hole (bike moves away). If you don’t have sag, one of those impacts won’t be accounted for by the suspension.

All good comments, observations, and opinions…for the record, my ST Thudbuster is spec’d at 9 grams lighter with 2mm less travel than the ShockStop. Regardless, I opted for Redhift’s post-plus-stem Kickstart promo package ($249 for both – just missed the early-bird promo which was $10 less). No major complaints about my Thudders – I own a ST for my cx-er and a LT for my hardtail mtb, so I’m used to extra post weight (at 6-3 / 210 what’s a few more grams). I really like Redshift’s design, adjustability, and aesthetics (and promo price!), so I’ve decided to give the Redshift post and stem a try on my new gravel bikepacking/touring rig. Ride-on, mates!