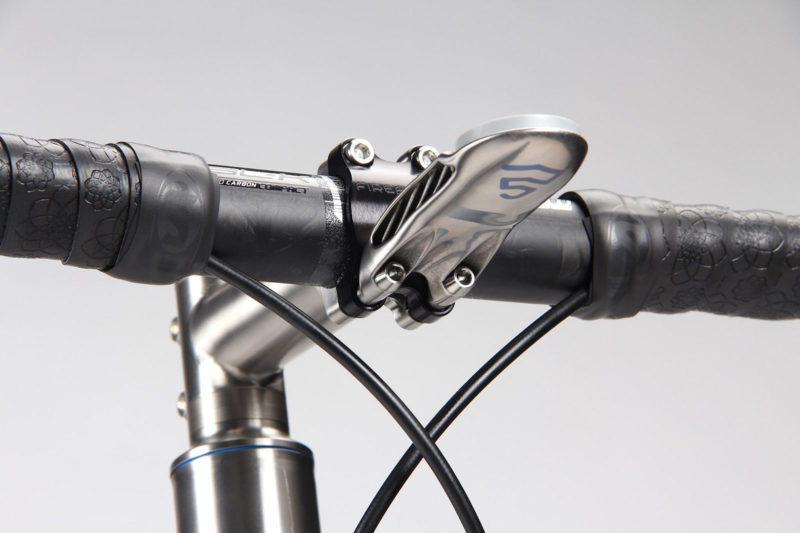 Silca is getting into 3D printed titanium parts, and they’re starting with this H.R. Giger-alien ship-looking out-front computer mount called the Mensola. Overkill? Perhaps. But when has that ever stopped Silca before?

Owner Josh Poertner says “we looked at how we could differentiate our manufacturing from what China can do, and it comes down to one-off and small-batch production runs. China wants to do thousands of parts. But with 3D printing, we can do one part and still have a viable business model.” 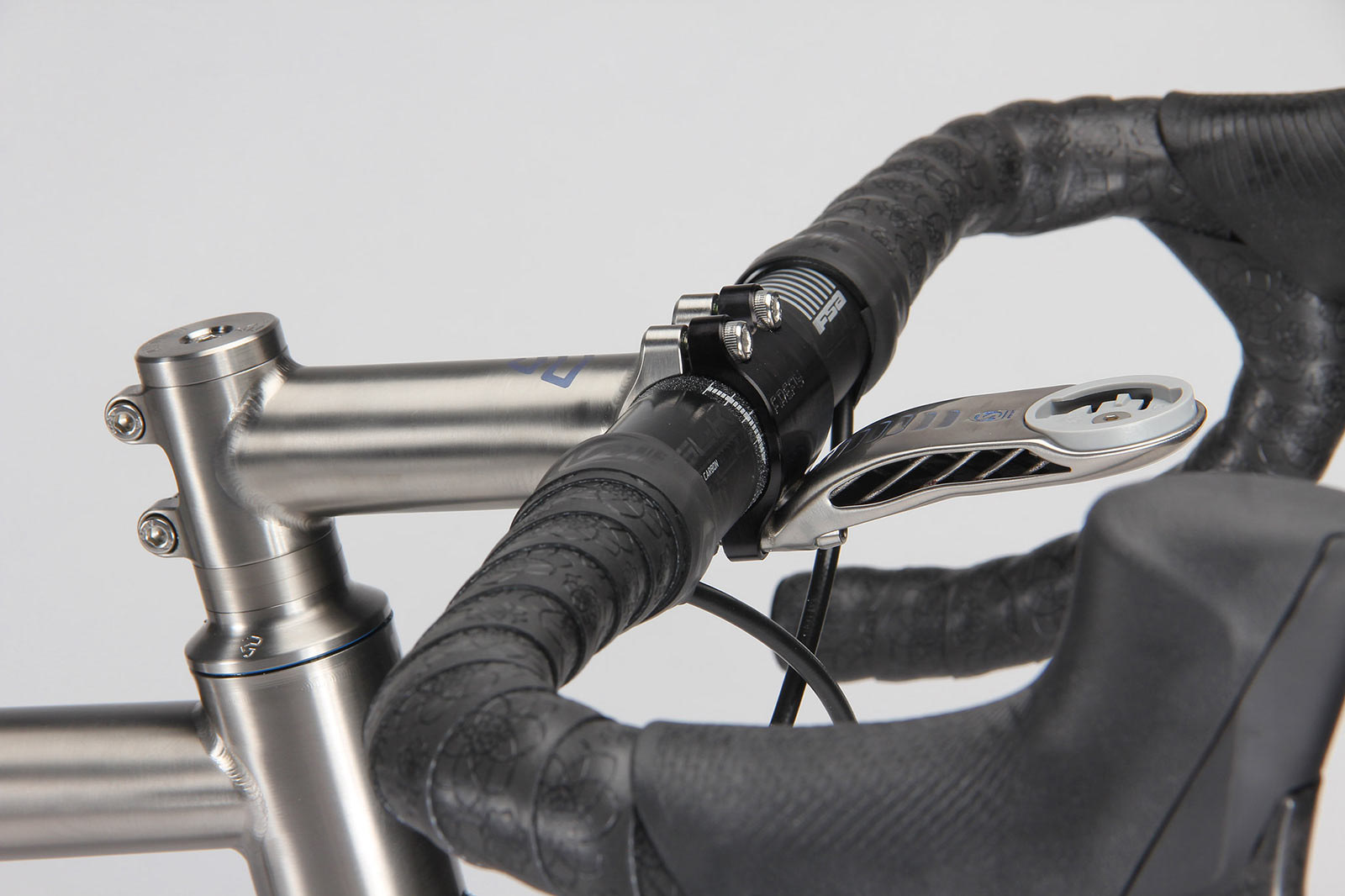 Of course, they’ll do more than one part. In fact, they’re launching with about a dozen different part numbers to fit the bolt pattern and shape of many of the most popular stems. And there are more to come as they’re able to scan additional stems or new stems are introduced.

They’re stronger than your current mount

It’s not just about printing small batches for the sake of boutique parts, though.

Josh says with this Mensola design, the load stress is on the top and bottom skins, the material in the middle isn’t really doing that much. He compares it to an airplane’s wing, where the internal structure isn’t doing as much of the work, but is still necessary. 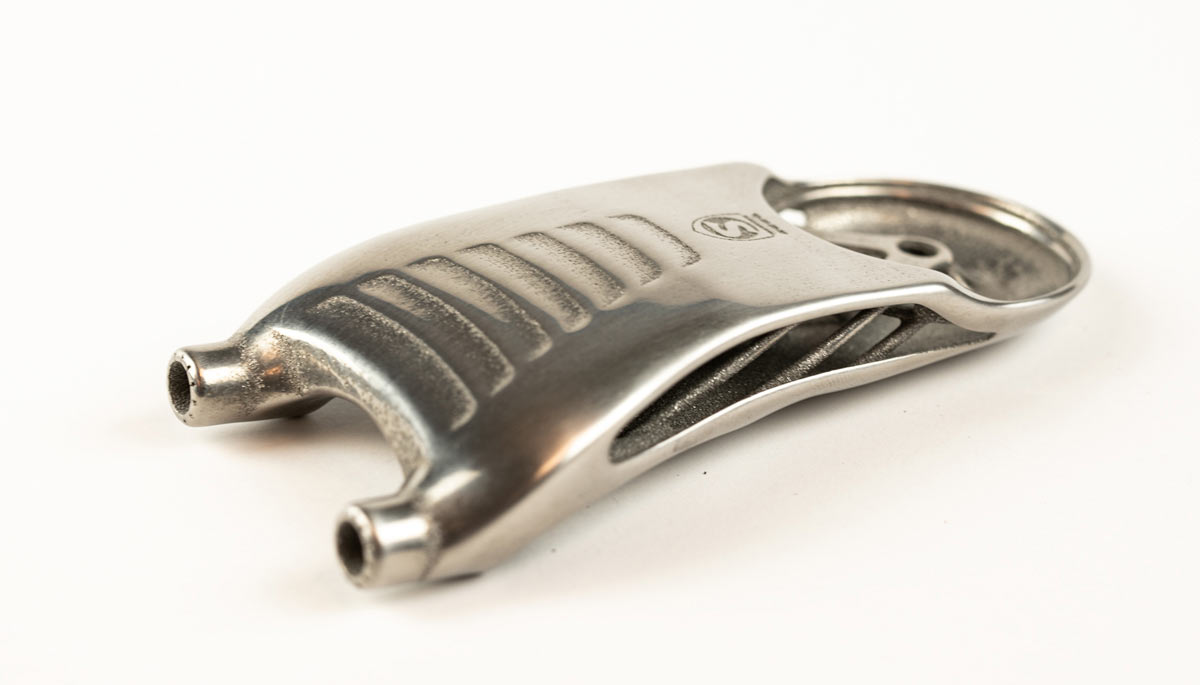 3D printing allows them to do things CNC machining can’t, and they say this design is 6x to 10x stronger than designs made with traditional methods using aluminum.

Despite the wide, oversized look, they’re lightweight, too. Claimed weights are from 27.5g to 38g, depending on model. And, they say they’re more aerodynamic. 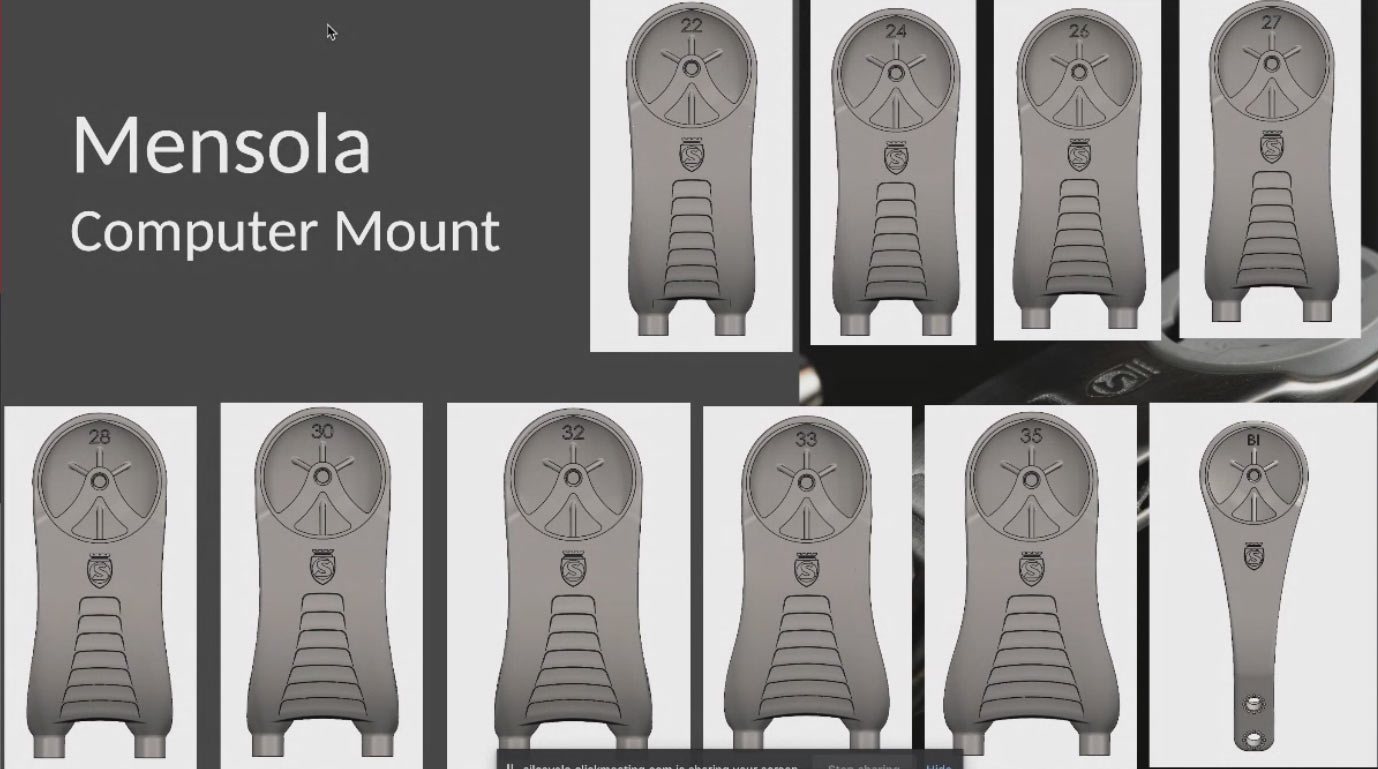 One length, but multiple mounting designs to fit various popular stems on the market.

They’ll start with a single length, which they say will work with pretty much every GPS cycling computer on the market, including the Wahoo Bolt’s aero shape.

Ten models will be offered at launch, with the number shown on them (image above – 22/24/25/26/27/28/30/32/33/35mm) indicating the center-to-center bolt hole width they’re compatible with. These are designed to work with stems from Specialized, Bontrager, FSA, ENVE, Zipp, Syncros, Firefly, and Bianchi. The direct-mount version shown on bottom left bolts to the bottom of a Black Inc bar/stem combo unit. 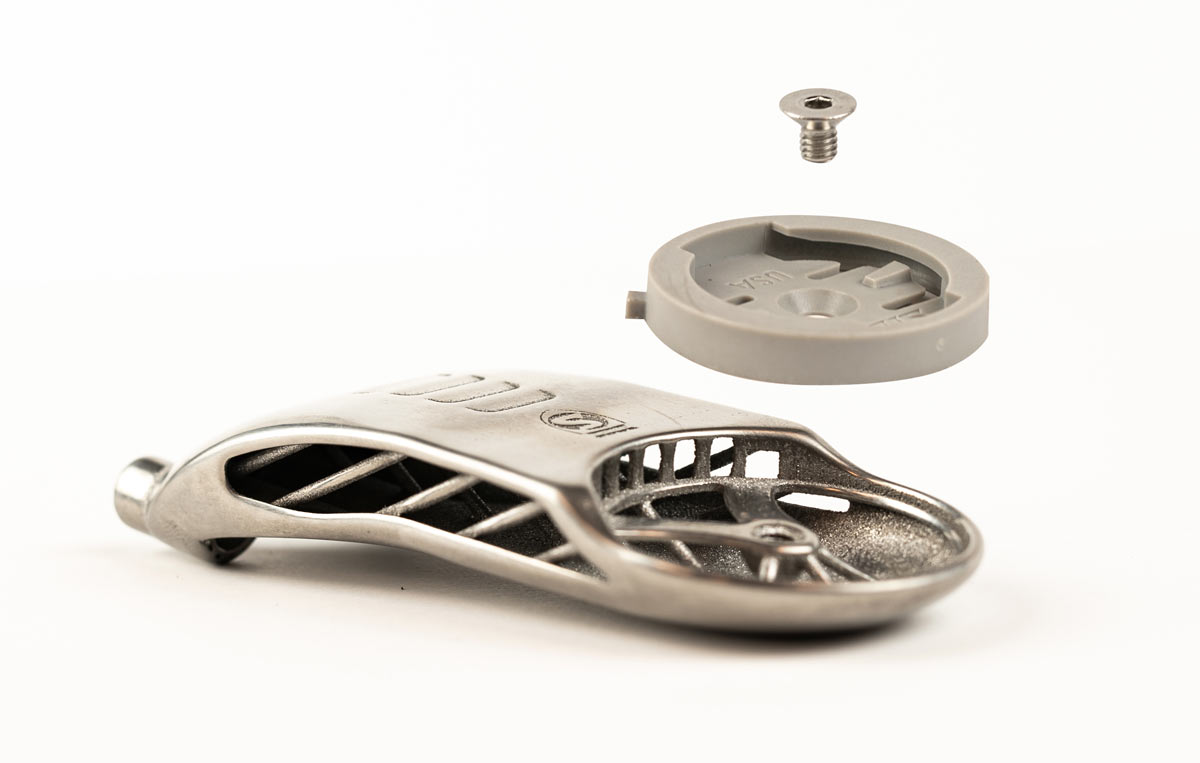 Retail price for the Mensola is $175 with all titanium hardware and the fiber-reinforced composite computer insert. That insert uses a single bolt to attach the mount puck, which has tabs on the back to clock its position at 0º or 90º, making it compatible with anything using either Garmin’s or Wahoo’s mounting standard. 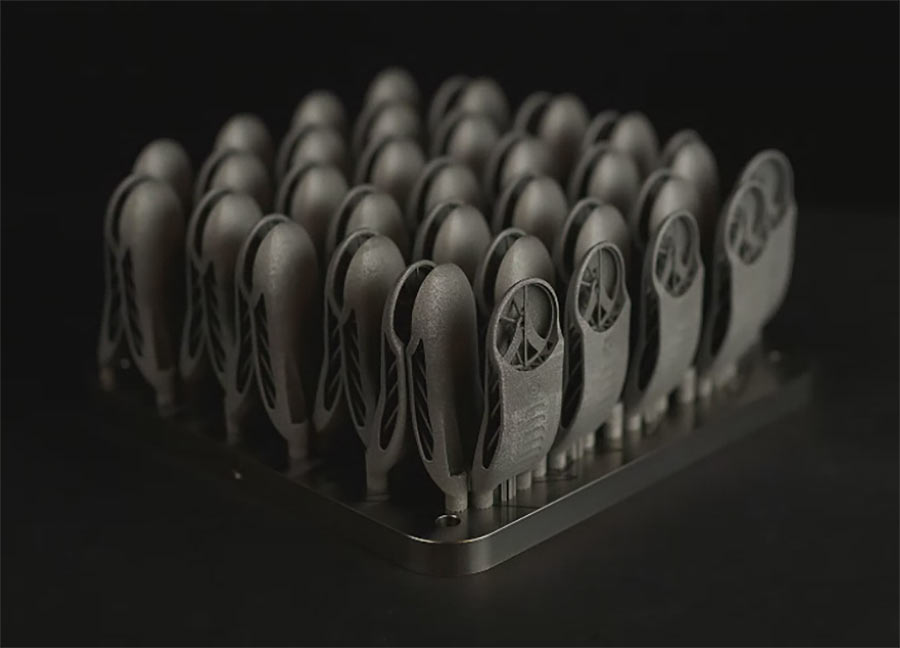 Yep, here’s why: It costs more than $500/kg for the base 6/4 titanium powder. Their machine lays down a 30micron thick layer of powder, then a laser then essentially welds a layer of powder to the top of the layer underneath it. The powder sits on a shelf that lowers itself down 30microns after each pass to make room for the next layer of powder to be brushed on top, then the process repeats. 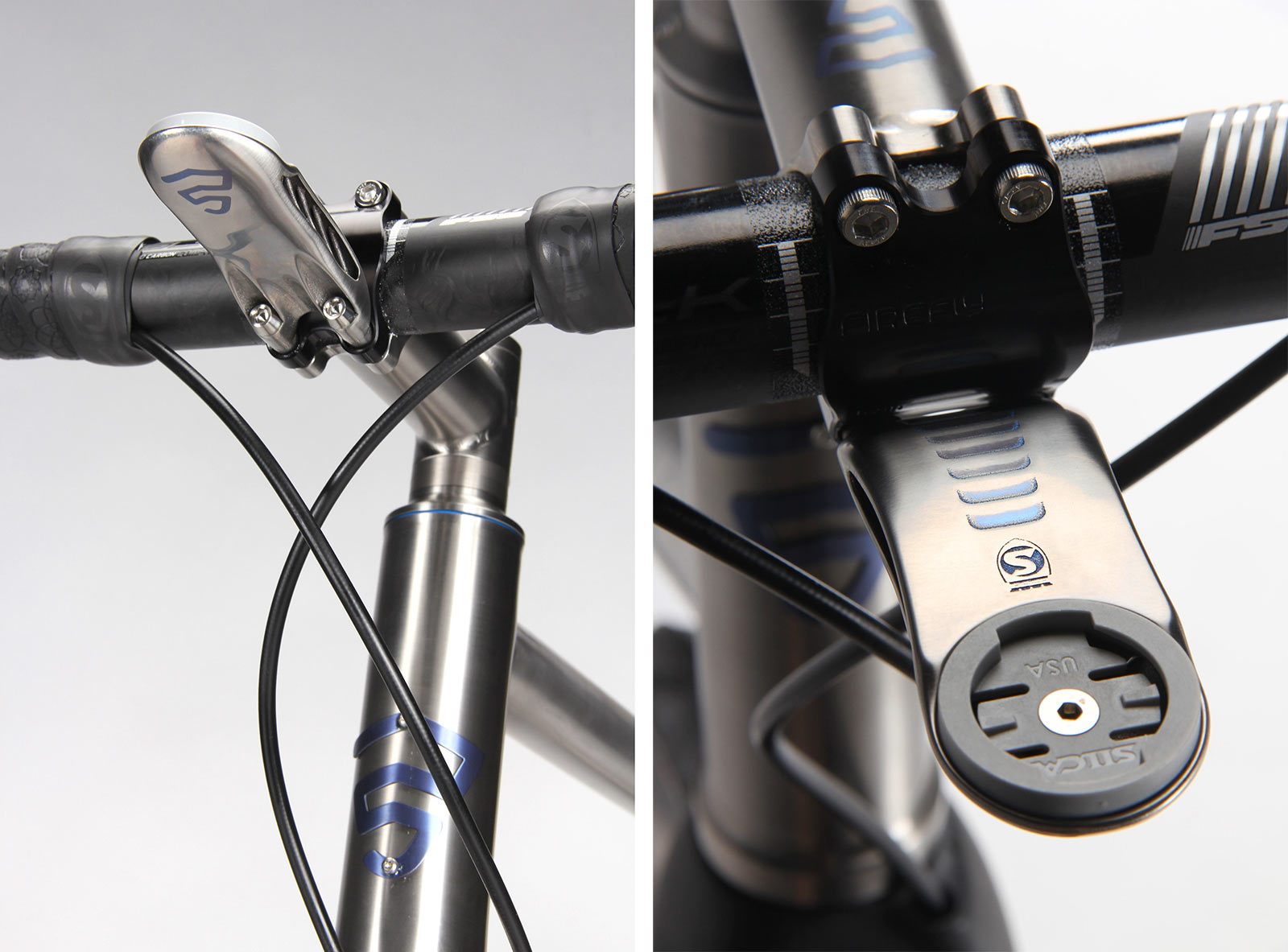 So, while Silca says the manufacturing limitations are completely removed, they’re talking about design limitations. Production is limited by the number of very expensive titanium 3D printing machines. Which is why, by the end of May, they’ll have a second machine up and running with 3x the capacity. 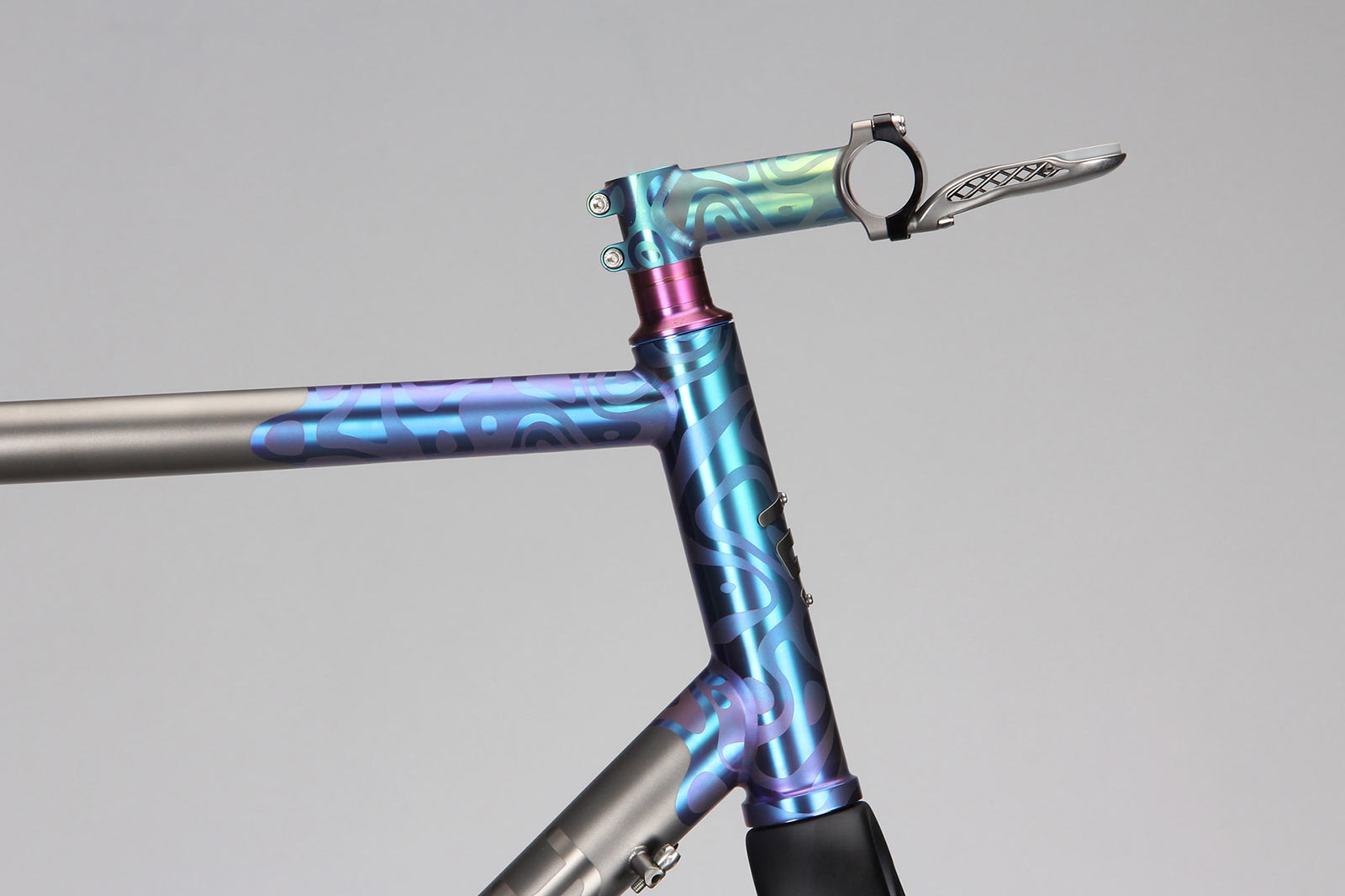 But these mounts will still be expensive because some of that new machine’s capacity is going toward other new parts they have been testing on pros’ bikes in races. Stay tuned…

For a fraction of the price you can get a Fetha mount that weighs half as much… that doesn’t look like it was designed in China. But I guess this was designed with the NiteRider owner in mind.

Why do you say “look like it was designed in China”. The Fetcha looks like it could have been designed anywhere, including China.

Chinese design usually tends to be overly designed and as far from minimal as possible. If you look at some China direct lights for example, you notice lots of extra vents and chamfers along with busy surfacing. Their tastes tend to be flashier where they want to stand out from the competition.

While the Fetha mount on its own isn’t much to look at, you have to take into context as to where it lives – on a bike hidden under a computer. The fact that the mount isn’t noticeable/visible while in use is why I like it and why a Chinese company would find it “boring”.

Most mounts sold on AliEx these days look very similar to K-Edge designs. Simple, straightforward, machined alloy. Yes, in general the Chinese tend to like it flashier but in this particular area I can’t see it.

I’m glad it’s so strong. There’s a lot being asked of it

When someone accidentally leans on your computer and rips the thread inserts out of your carbon stem. Or breaks the bolt heads off from any other stem.

“When someone accidentally leans on your computer?” Riiiiight

Or you could mount your computer mount to the handlebar like a regular meat cyclist.

Interesting, but a pity it’s another fixed angle mount, as the stem angle then controls potential reflections on the screen. Maybe an evo version will use spherical washers, like on canti brakes?

Also, with a single fixing bolt the speaker/beep hole is obstructed when used with some Garmin computers.

If your stem isn’t slammed you’re not their target market (Velominati Rule #45)?

Ironically, the most troublesome combo I’ve seen is one of my -17 degree stem.
The thing is, that stem has angled bolt hole. The stem is already parallel to the ground but lower stem mount point more downward. Making computer mount that mount to lower stem bolts point down.

Good point, I couldn’t imagine this would work well with my set up (-17° stem) since it would angle the head unit downward. Not a product aimed at me though. Hopefully v2.0 can have a grub screw that can angle the gps mounting plate.

I feel like a product this premium should have more computer compatibility – specifically for the Omata computers!

Yes please, I always like to have a long lever under the head of a safety critical bolt. Preferably under two of them on the same side so that I eliminate the redundancy of having multiple pinch points on a critical clamp.
More seriously though, if I had proposed a design to my boss like this when I was a young engineer, I would have gotten a stern talking to and it would have reflected poorly on my judgement.

But it looks brilliant!!!11
Especially after a couple of rides have deposited some grime in the uncleanable interior of that maze of struts. OK, at this price you can be expected to a) ride it only to the cafe anyway, and b) regularly take it off and clean it in a solvent-and-ultrasound jewelry cleaner.

What I’m seeing here is no more complicated to clean than the pivots in a front derailleur you would just spray whatever dirt is in there with a hose or you can shoot it with compressed air.

I’m with you on this – a computer mount is a non critical component. Kinda crazy to integrate it into the most critical component on your bike, for aesthetic gain only. A bit like having the beverage cart integrated into the landing gear of an airplane. I get it that it’s nice to have a good looking bike, but shit happens…

Dylan Sutton
Reply to  E B

I’m not seeing it, but then again I don’t iron mine flat so YMMV.

As you said, thats when its from a copied design. If its copied they tend to either straight copy copy it or slightly tweak it enough to be slightly different. If you had a Chinese company coming up with an original design though, it would be this.

Love it. Silca if nothing else tries to be innovative. I just get a kick out of all the complainers. Seems to be the same ones on just about every post. If you don’t want it don’t buy it. Keep being innovative and interesting Josh. Plenty of supporters out there.

What is innovative here? This type of mount (attached using the stem bolts) already exists. Apart from that, using 3D print titanium for this application is overkill, it makes no sense. Just because they can do it doesn’t mean they should do it. It seems they bought that 3D printer and then tried hard to find what to do with it… keep thinking

175.00 and I can never mount any gopro mount underneath it either.

actually looks like a “Necromonger” space ship from Riddick.

The design is not aesthetically appealing. Quite the contrary. And what is this obsessions with strength? I have had a first generation K-Edge mount for years now — when was that mount first released? Strength has never been an issue and that mount has migrated to 3 different bikes. I also have K-Edge and Enve mounts with the camera/light mounting option under the computer. No strength issue there, either. So the extra strength is a solution searching for a problem? At $175 not even offering a camera/light mount is ludicrous.