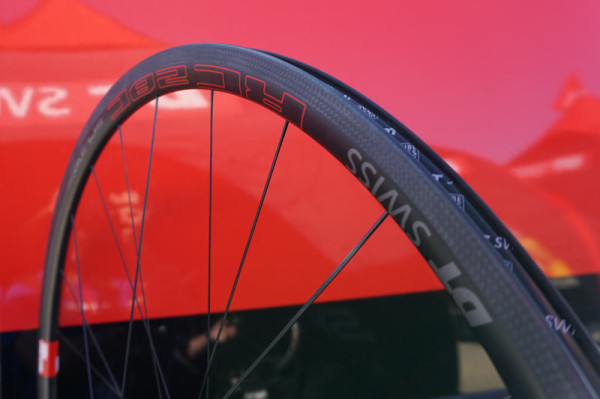 The Mon Chasseral was DT Swiss’ first real complete road wheel, which was all alloy at its inception in 2005. Now, the name is back, but it’s gone to mostly carbon with all-new carbon hubs and carbon rims.

The hub is based on their 180 but with a new carbon fiber shell. The front hub’s shell is full carbon, and the rear is mostly so with an alloy spoke flange on the driveside. It’s packed with their top of the line SINC ceramic bearings. They designed the bearings, having them manufactured and sized specifically for these hubs rather than taking something off the shelf and building the rest of the parts to fit them. The cartridge is about the same size as others, but inside, the ball is made to their spec to control the tolerances. Altogether, the hub set is about 30g lighter than a stock 180.

The rim is their current tubeless ready carbon clincher that’s on the RC28 wheelset. The spokes are DT Aerolite, 18 front and 24 rear. Wheelset weight is 1280, and price is $TBD. Available in August.

More pics and other new stuff below… 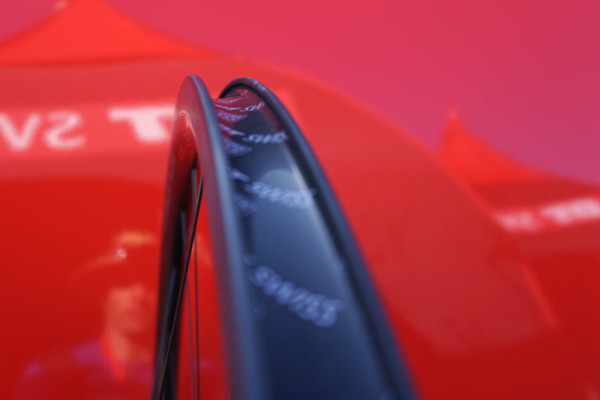 Most of DT Swiss’ road wheels went to tubeless ready rims for 2015 and come with rim tape and valve stems. 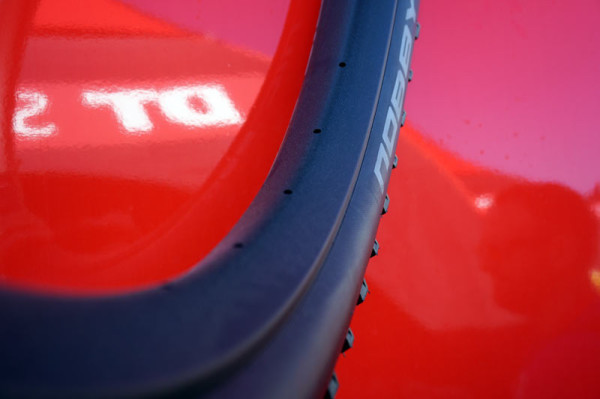 Their upcoming plus-sized rim with 30mm and 40mm inside widths. It’s unnamed as yet, but will come in 27.5 diameters. 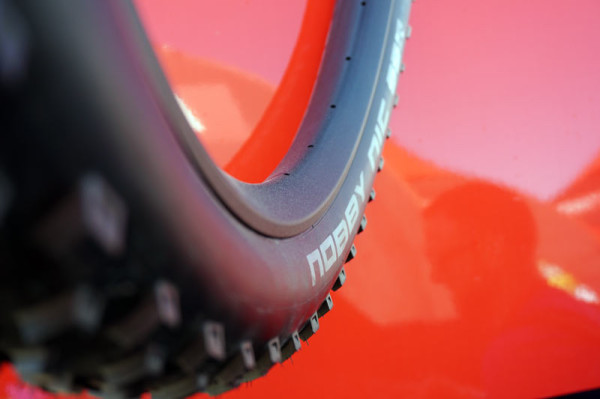 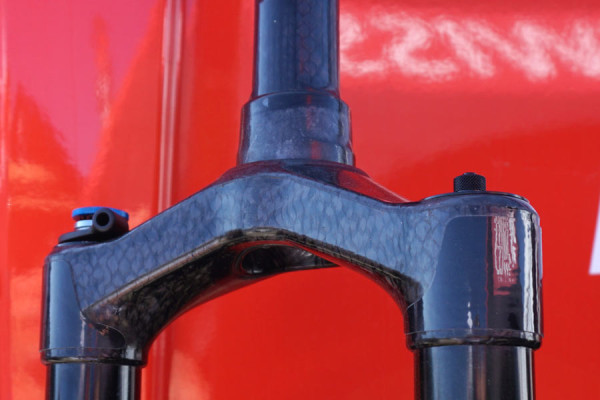 First shown a couple days prior to Sea Otter, the limited edition DT Swiss OPM Race fork gets a new carbon fiber crown and steerer to bring 29er 100mm travel weights down to just 1490g. Our original post covers some of the other new technical features, and as the comments suggest it’s perhaps not exactly the “lightest production fork” as DT claims, but we clarified that the 1490g claimed weight does include the expansion plug, steerer cap, uncut steerer and 15mm thru axle…all of which add up and usually aren’t always in every brands’ claimed weights. That’s an 80g savings over the standard OPM alloy version. 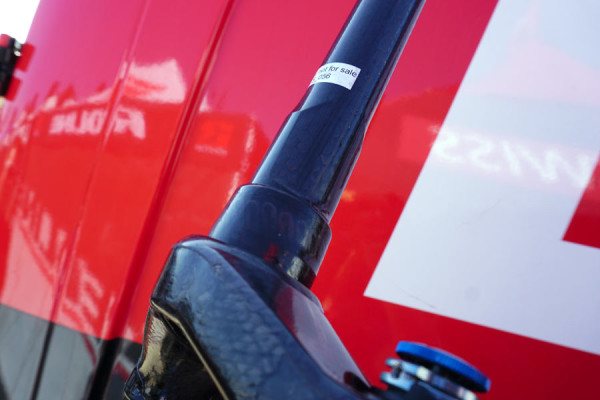 The unique pattern in the carbon is thanks to its woven construction, made for them by a hosiery facility that specializes in this type of fabric making. The steerer tube is molded with a wider section at the base for 1.5″ bearing races. The rest of the steerer tube is narrower with an ovalized shape at the bottom to better control fore/aft flex and keep things stiffer. 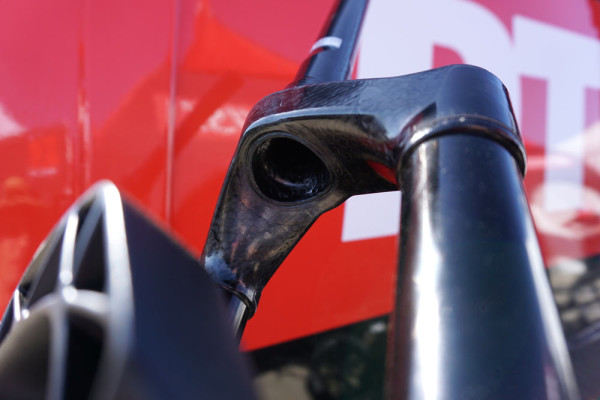 Another unique aspect of DT’s new carbon uppers is the fact that it’s a two piece unit. The crown is molded separate from the steerer, then they’re bonded together. Those black decals on the sides of the crown are merely protective measures. 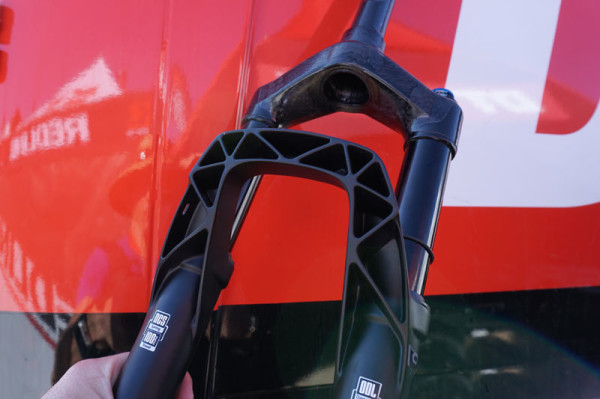 The lowers are their OPM (One Piece Magnesium) part that’s used on current forks. The ODL refers to the three-position compression damping adjustment – Open, Drive, Lock.

That carbon rim bed does not look tubeless compatible. I can’t see a bead shelf. I’m I missing something? Perhaps the way the photo is taken?

Mr. P, your eyes are not mistaken, there is no “shelf”. I’ve ridden the RC28 wheels tubeless for CX and Road with no trouble.

That fork weight is almost exactly what my SID WC weights without axle, but with plug. So a wee bit lighter but way more awesome looking

Mr. P is correct. Those rims are not designed for tubeless tires. That does not mean that you cannot use a tubeless tire as long as you inflate it high enough. But any tubeless tire needs a shoulder in the rim bed to sit upon in order to center the tire and prevent burping. Tubeless tire beads do not stretch unlike the Kevlar beads used for normal clinchers and therefore the tire will not center because of a bead hook.

Dear DT Swiss. Really? A carbon clincher climbing wheel? It had better be 26mm wide or we can all reset our calendars to 2011.

@STS- Actually, he isn’t correct (unless you designed the rims and know otherwise?). These rims have no bead shelf, that is true. Based on the RC28, they are, however, 100% approved for tubeless usage by DT Swiss. Again, I have used RC28’s tubeless for CX and Road with no burps from 30psi-120psi. Despite having no shelf, they work, and are officially approved as such. I assure you the tire always “centered” just fine.

No bead shelf for tubeless would be pretty unique, I’m curious how it works. It does spook me a bit.

thesteve4761 is correct that the RC28 has a similar inner rim profile and is call tubeless compatible by DT Swiss.

How much does the fork weigh after the art fills with dirt?

tubeless “compatible” seems like a grey area still. Some of the rims that claim this require kit style installs. A rim like Stan’s alpha or american classic are simple and rock solid. I could never go back to using rim strips like we did 5 years ago.

It’s not just a clincher climbing wheel, it’s a tubeless climbing wheel. And it should be tubeless ready out of the box with the tape pre-installed, just like all their other tubeless road wheels at the moment. No need for extra rim strips like years ago

Road tubeless works ok with out a shelf. But Cross tires would not work as well on it at low pressure. A shelf would be nice to see.

There is NO way I would run that for CX, I have used different tubeless in CX and have lost skin trying to make beadless rims work. Look at car and motorcycle rims, all have bead seats. The only auto rims I have seen without bead seats is super high pressure rated (125psi) truck stuff with casing so thick they hardly flex. Squishy little car tires at 35 psi have bead seats. All UST has bead seats. All chinese carbon mtb rims from Nextie, NOX, LIght-Bicycle, Easton, Reynolds, have beads seats (low pressure designs right)