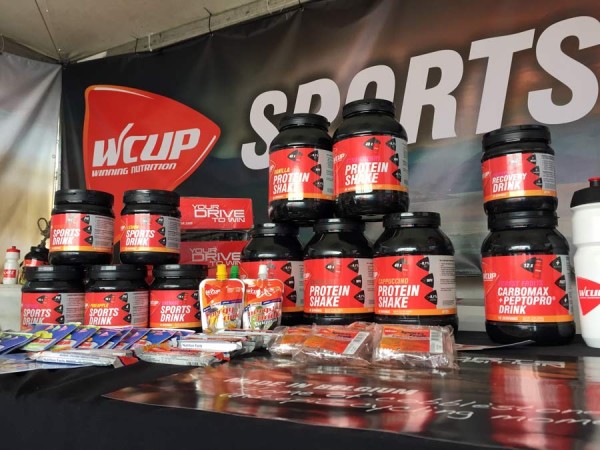 WCup is a Belgian sports nutrition company that was started 21 years ago. During that time, they say many pros have used the product unofficially (including Tom Boonen and Sven Nys in more recent times), filling their team bottles and jersey pockets with the brand’s staggering array of potables and edibles. Officially, the Stomper Bikes team in Portland and cyclocross pro Ben Berden are riding it now.

It’s a complete line, from bars, fruit chews and sports drinks for during, to caffeine shots for before an during, to recovery drinks and protein shakes for after. Started when nutrition was somewhat of an afterthought and nowhere near as advanced in its thinking as today. Whatever they were eating and drinking 20 years ago was not necessarily optimizing performance and often caused stomach issues.

So, WCup added four different carb sources to their sports drinks, plus magnesium and BCAAs. They also removed all the acidic components to keep it pH balanced. It was only for pros and not really even planned as a consumer product. Until they realized there was a market for the things that made the pros fast.

Created by doctors and developed in labs and universities, the products are made in Belgium and Sao Paolo, and most of what’s sold in the U.S. comes from their Belgian plant. It’s all making its way to North America now thanks to Stage Race Distribution. 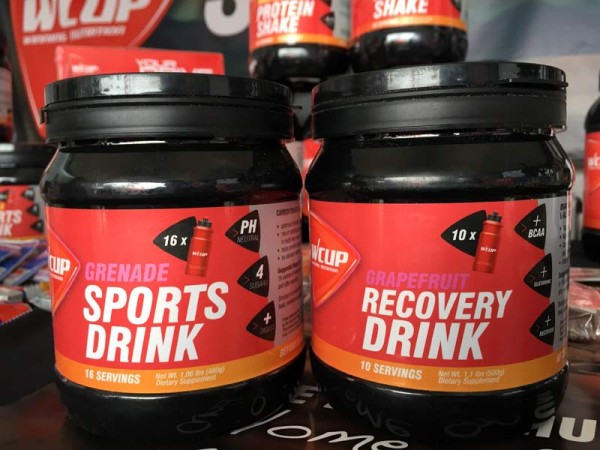 A new flavor of Sports Drink rotates in every six months to keep it fresh and your palate happy. The four staples are: Lemon, Orange, Tropical and Grenade (Pomegranate).

The sports drink combines dextrose, sucrose, maltodextrin and fructose for the carb sources, plus sodium, magnesium and potassium. The sodium comes from a number of sources and totals a whopping 330mg to keep cramps at bay.

The recovery drink takes a different approach by using a large dose of BCAAs and L-Glutamine instead of a complete protein like whey. Carbs come from saccharose (aka sucrose, or table sugar), dextrose, maltodextrin and fructose. 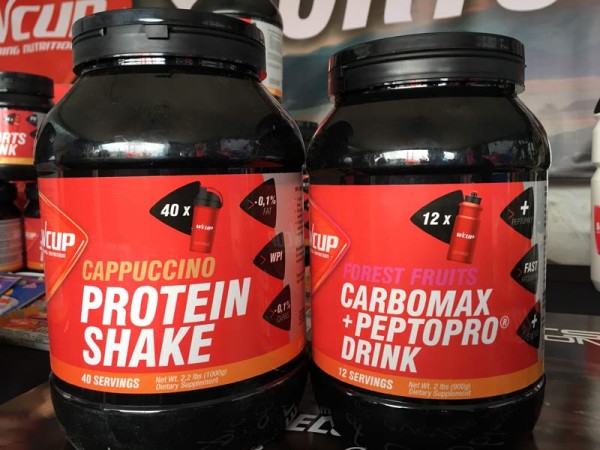 Click to enlarge for details, but PeptoPro is basically a pre-digested complete protein that makes its amino acids immediately available during exercise to spare muscle breakdown and speed carb delivery. 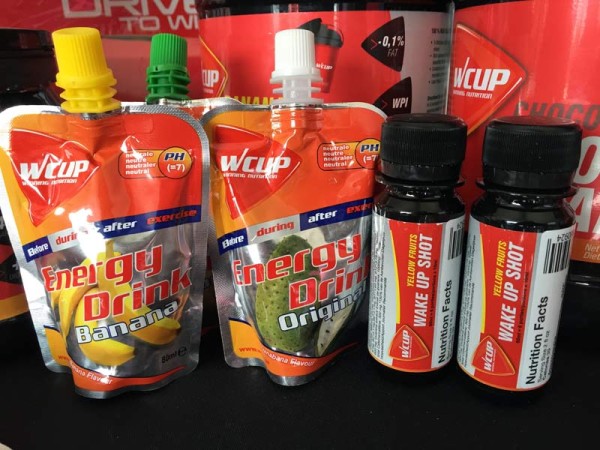 The energy drink pouches are pre-mixed sports drink, and the Wake Up Shot is a serious hit of caffeine for the longest, hardest rides. 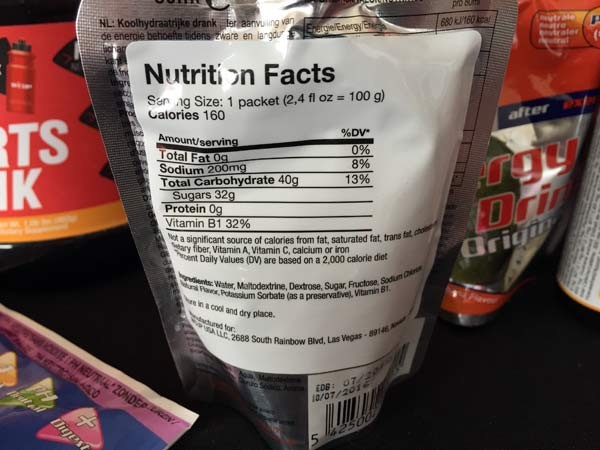 This is concentrated sports drink with a serious hit of sodium…best to follow with a  little water, or super convenient to dump into a half-filled bottle if you’re self supported. 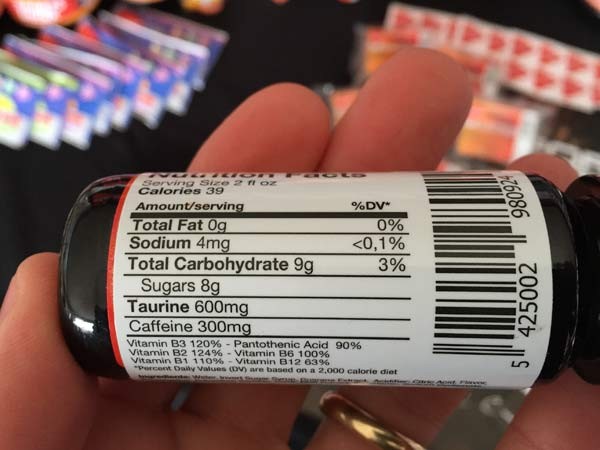 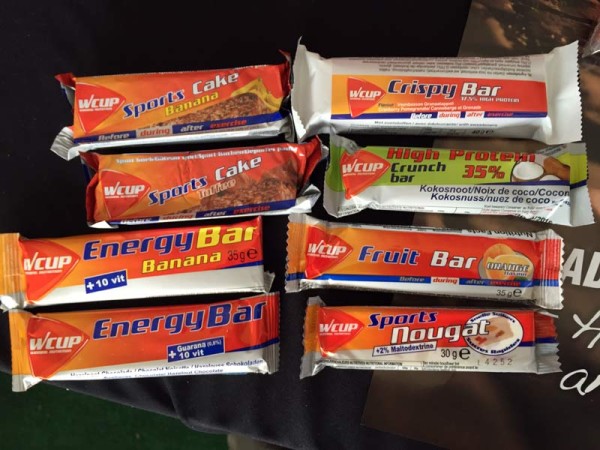 Need some textural variety in addition to the flavor options? They’ve got you covered. 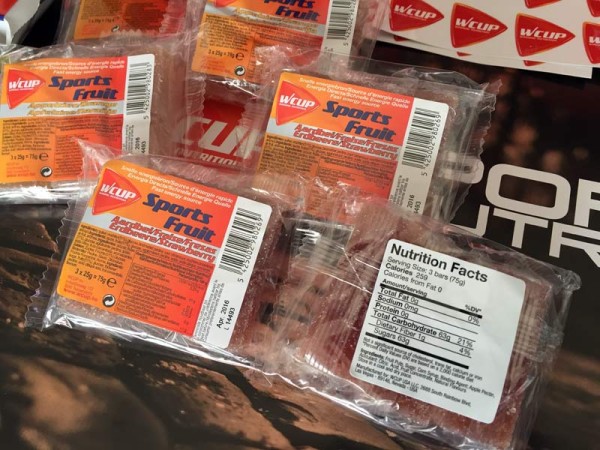 Sports Fruit is a real fruit based chew and will eventually come to the U.S.

Website will make product recommendations for what to bring and when to use it, but their general guideline is solid food at the beginning of the race and transition to liquids as things wear on.

Ojio Sport is a complete sports nutrition brand that’s built entirely on plant and sea mineral based ingredients. The Ultimate Green Energy pre-workout booster provides some very easily digestible whole food energy that’s been working well for me on a few rides since the show. I brought home the Apple flavor and it tastes just like a green apple Jolly Rancher. If you’re into the whole foods thing or looking for plant-based alternatives, I have a feeling you’ll love this brand. Zach tried it too and wasn’t a fan of the taste or texture, so if you’re preferences lean toward the traditional sports drinks and recovery shakes, these may take a bit of getting used to. 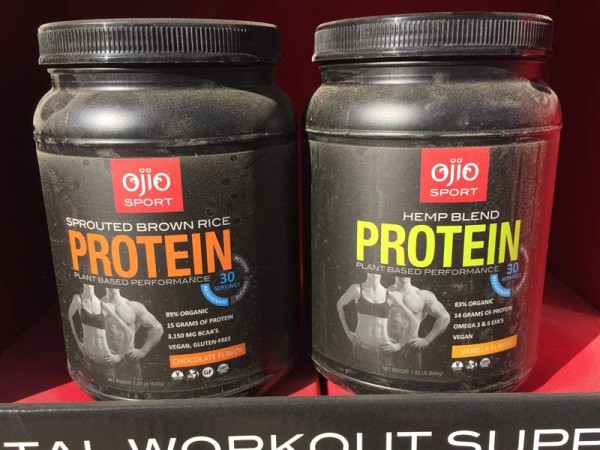 For recovery they have three different protein drinks: Brown Rice, Hemp and Ultimate Greens. The Brown Rice Protein is 100% just that, plus any natural flavors and stevia added to the chocolate or vanilla versions. An unflavored natural version is also available. The Hemp Blend includes some brown rice protein, too, plus the same flavor/stevia additions as necessary. The Ultimate Greens (not shown) uses both proteins plus proteins from chlorella, wheat grass, spirulina, alfalfa, oat grass, barley grass, kamut grass and other sources. They’re available in 30-serving tubs and single serve packets. 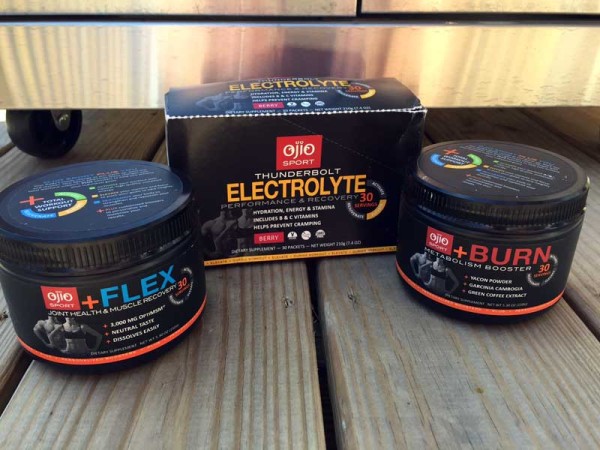 For during riding, they have lightly sweetened electrolyte packets and liquid concentrates. They also offer boosters that can be added to any beverage to gain specific benefits, whether it’s improved joint health or a metabolism boost to get down to race weight. 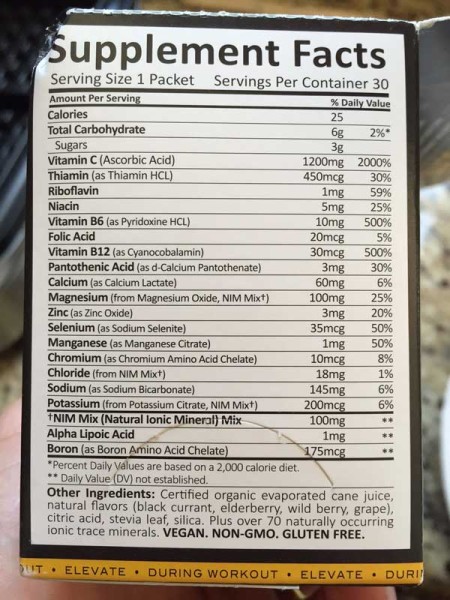 The electrolyte mix comes from evaporated sea water and includes a huge mix of trace minerals alongside the basics, plus a few vitamins. It’s very lightly flavored and lightly sweetened with just a few grams of sugar and stevia. I’ve used it on a trainer workout and it’s tasty, but you’d probably want to bring a little something along to snack on for longer rides. 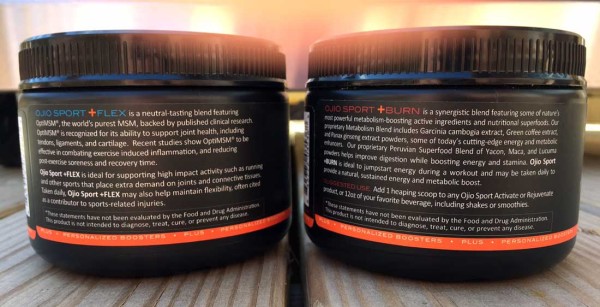 Click to enlarge for details on the Flex and Burn boosters. I’ve been using the Burn for a few days now and it mixes well enough in water and has almost no taste – just a slight tea like flavor. There’s also a Super Greens booster for adding basic superfood health to any shake. 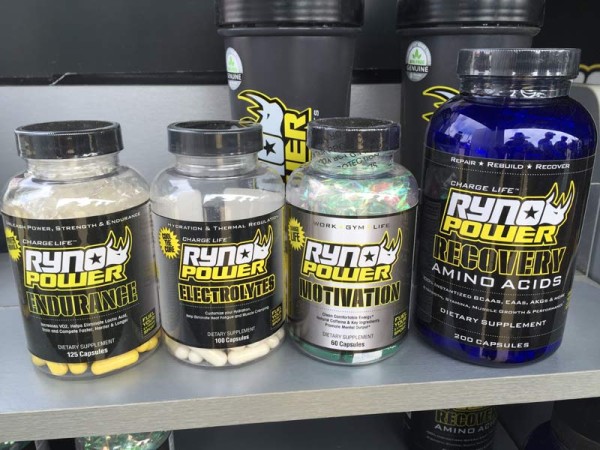 RynoPower is big on supplements to make the most of your workouts, offering everything shown here as combo kits as well as selling them individually. They even have a chart on their website showing recommended combinations and amounts based on intensity. While they make look like the bodybuilding pills your favorite gym rat is popping, all of them work for cyclists, too. 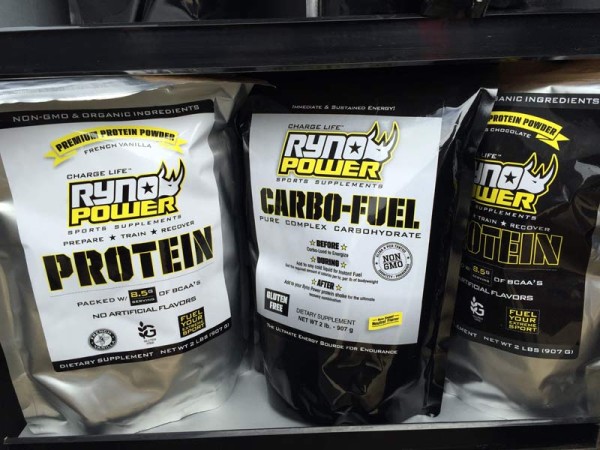 They also offer complete proteins in the form of good ol’ fashioned whey protein, plus a 100% non-GMO maltodextrin for anyone looking to carbo load. 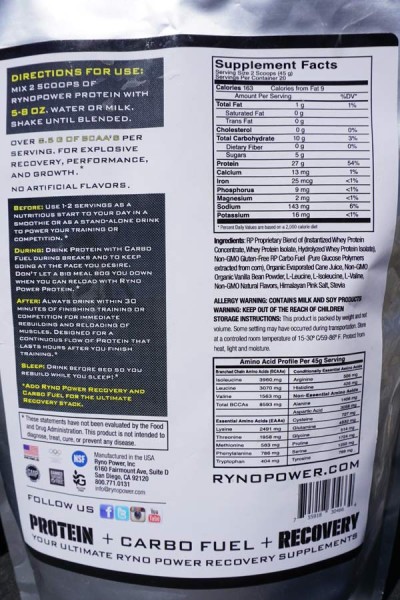 The protein powder is particularly appealing compared to many other flavored options out there because a) it contains a few carbs from maltodextrin and cane sugar to aid with recovery, and b) it uses stevia to round out the flavor rather than artificial sweeteners. The carbs aren’t super high, which makes this a great recovery option for anyone trying to get down to race weight without cannibalizing hard earned muscle. 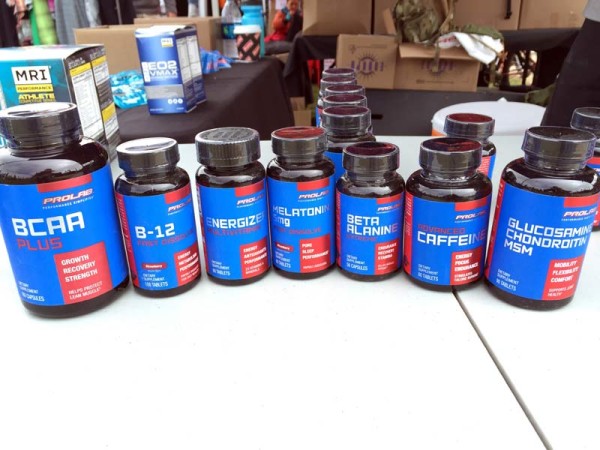 Prolab has been making these supplements for quite a while, most of which make sense for cyclists. BCAAs help with muscle growth and recovery, melatonin may help us get to sleep before race day, caffeine gets us going on race day, and beta alanine may help us make the most of our training during race day by decreasing fatigue and allowing the muscles to work a bit harder. 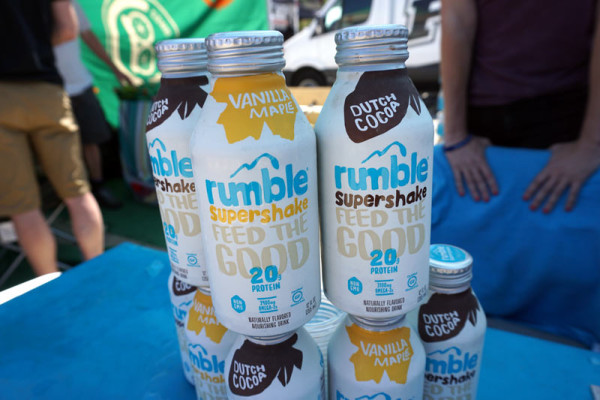 Rumble Supershake is a milk-based protein shake that combines milk, casein and whey proteins into 20g of the good stuff. It also uses chicory fiber and various oils (plus maple syrup!) to add carbs and fats, making it more of a drinkable meal. 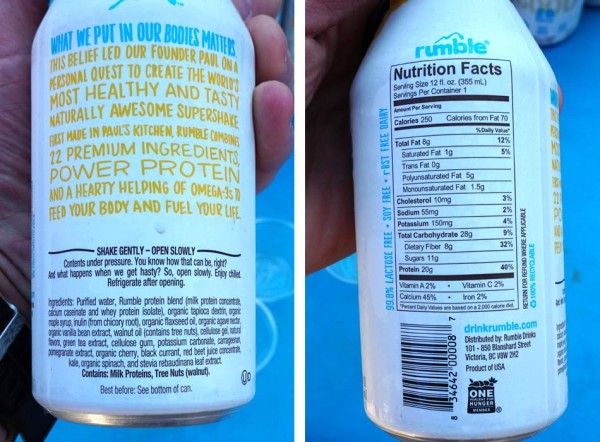 There’s even a tiny bit of kale and spinach in there for a nutrition boost. The vanilla flavor had a subtle, pleasant maple flavor that let you know it was developed in Canada (but made in the USA). They donate 1% of their proceeds to hunger-solving charities.

Like business reality TV? Check them out on The Dragon’s Den, BBC’s answer-by-way-of-Japan to Shark Tank.

FYI head to http://www.wcupusa.com as your source for Wcup!!
Any questions, feel free to ask.

I remember when [Rumble] Paul started coming out to ride with us. It was ~3/4 of the way through the ride that I learnt he was a double lung transplant. He did well, and only got stronger.