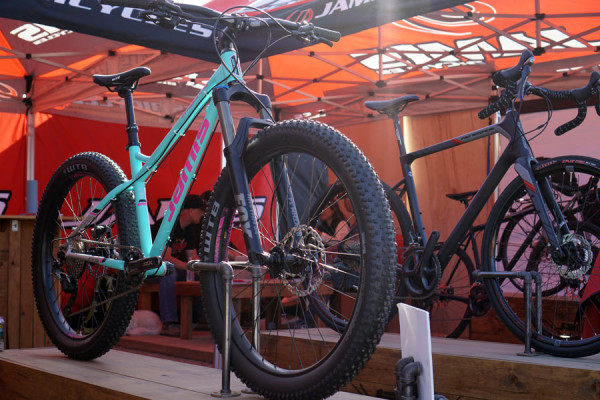 Alongside their updated Renegade gravel road bikes, Jamis had a completely revamped hardtail mountain bike lineup that introduced a new 26+ series. The concept was to provide the improved traction and ride of the fatter tires, but do it on smaller frames. Thanks to the new WTB Ranger 26×3.0 tires, the Dragonfly steel and Eden alloy hardtails create new options for women (or really short riders of any gender). Both use Boost 148mm rear spacing and get 27.5 Boost forks to make room for the larger volume treads.

The Dragonfly is the women’s version of the Dragonslayer, which replaces the standard 27.5 model of the same name. With the 27.5+ size, they effectively had to work around the same diameter as a 29er, which presented challenges in getting all the way down to a 14″ frame size. But 26+ ends up giving the same outside diameter as a standard 27.5″ tire. 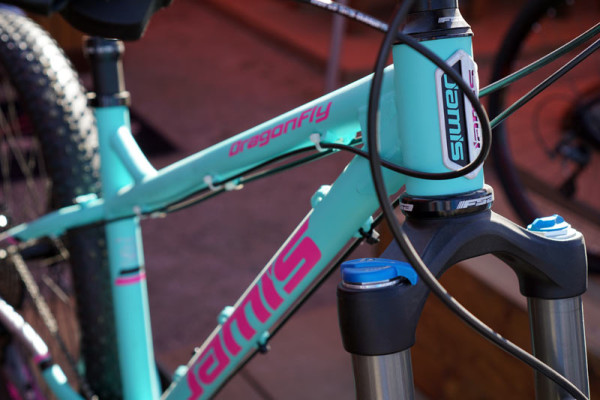 The frame is made of Reynolds 520 and is designed around a 120mm fork. 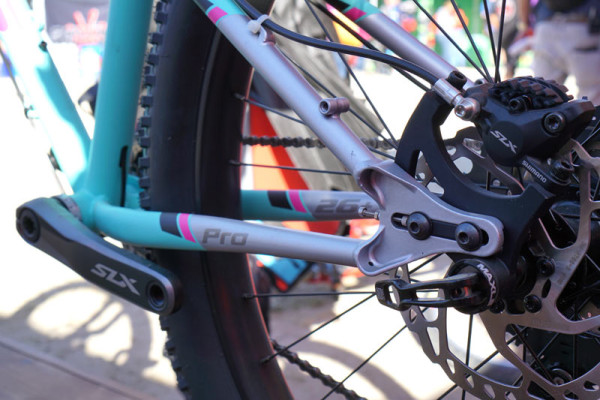 Sliding dropouts let you fine tune the chainstay length based on whatever tire size you’re running (you could probably get a 27.5 XC wheel-and-tire combo in there, too) or set it up as a singlespeed.

There’s routing for a stealth dropper, and the Dragonfly Pro will get a Fox Rhythm 34 fork and Shimano SLX 1×11 drivetrain but will be spec’d with the XT 11-46 wider range cassette. Pro will be around $2,500, but pricing isn’t final. Other spec levels will be offered also. Available by mid July. 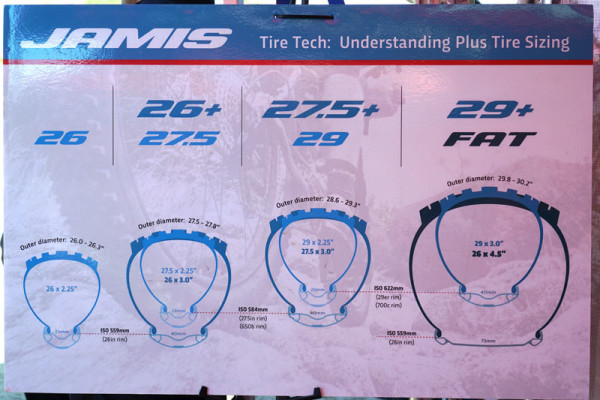 They had this handy chart to show how various tire sizes compare to each other. 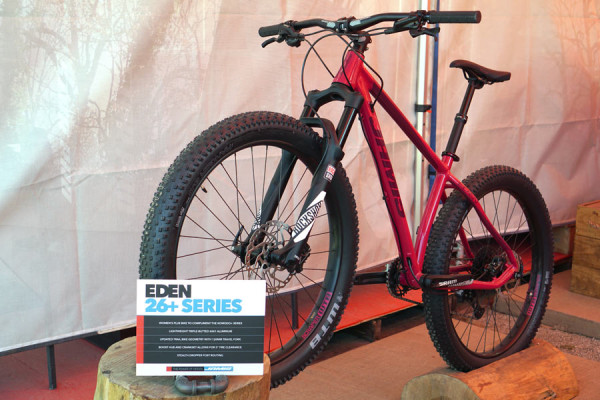 The Eden is the alloy equivalent of the Dragonfly and will also switch from a 27.5 to a 26+ for 2017. It’ll get slacker, slightly more aggressive “trail hardtail” geometry with a 68º head angle. A 120mm 27.5 Boost Pike gives tire clearance and plenty of suspension for getting rowdy. 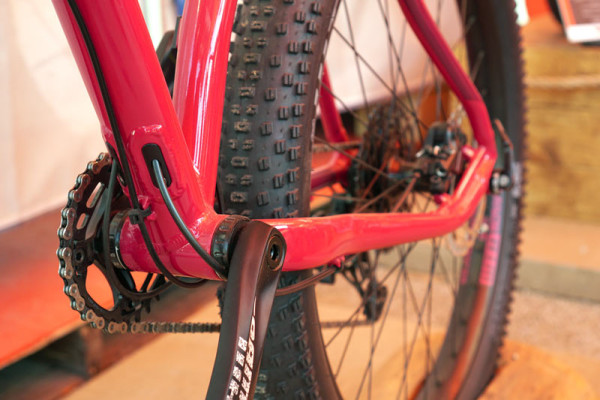 Shift and brake cables run internally through the downtube, then pop out to run along the chainstays. The dropper post runs externally and then pops into the seat tube for stealth routing…but we’re thinking you could swap those around and run the brakes externally if you don’t mind a zip tie down there somewhere to keep it from rubbing the tire. 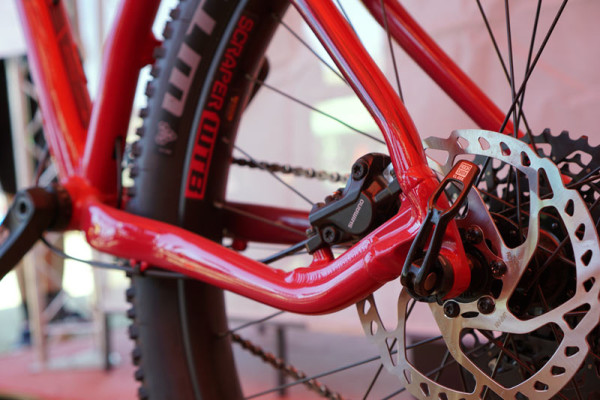 Thru axles front and rear. 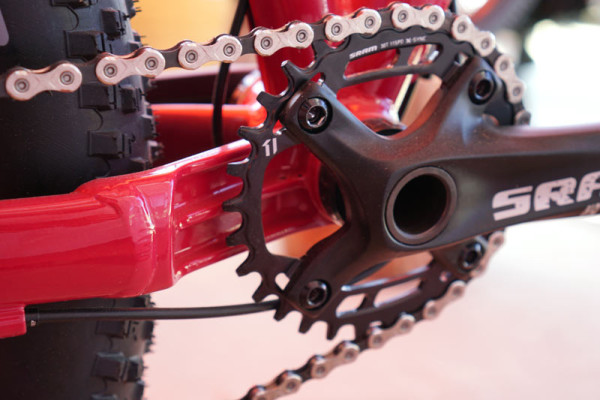 Will have two price points on this too, final spec TBD. They created a one-piece BB shell and drive side chainstay yoke unit, which gave them better chainring clearance. This one was also used on the new… 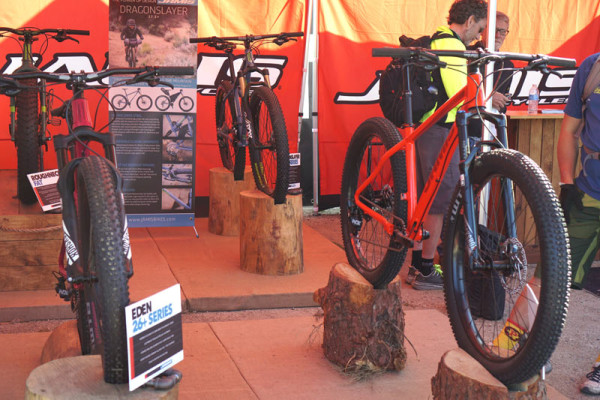 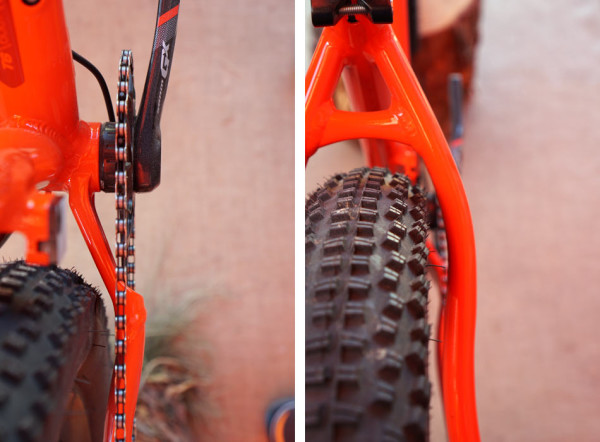 It goes to a Boost rear end. Note how the BB-chainstay yoke provides solid clearance for both the tire and the chainring. Both stays curve outward around the tire, then dive back in for improved heel clearance. 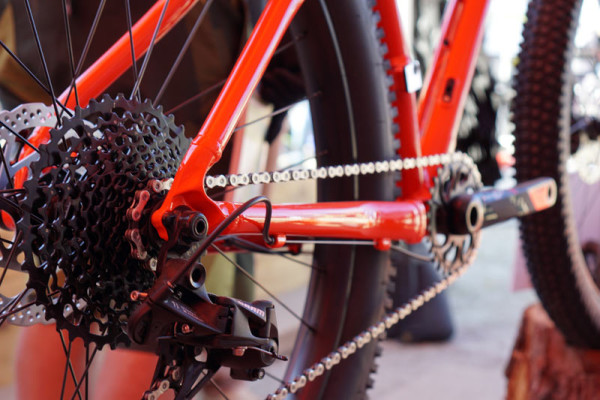 A SRAM NX group handles shifting, and you’ll get a Rockshox fork, WTB Scraper wheels with Trail Boss 27.5×3.0 tires and a Reverb dropper post on the Expert model.

26+ is rad. Lightest/strongest rim size with the ideal tire diameter for am riding. Glad to see that the surly dirt wizard isn’t the only tire for it anymore.

Hope 650c for road comes back for the same reasons. My wife at 5′ 3″ – road bike fit and geometry with 650c wheel is so much better than 700c. Only problem is she is limited to mostly 23mm tires

Damn, that Dragonfly would have been a perfect new singlespeed for my 5’2″ wife. I was hoping that 26+ would take off. Something a little more fun than the 27.5 that she is running now.

That chart is disingenuous and specifically made to show 27.5 tires as a perfect in between size….so not to scale at all.

@JBikes, your the one who’s being disingenuous by armchair quarterbacking a “not to scale” picture on the internet that’s not “straight on”.in the first place. 27.5 tires are only in that chart once. Hardly trying to show that it’s “perfect” just showing that “depending on tire size” a 26plus is about the size of a 27.5… which is true.

What’s a “normal” 29er tire? What’s a “typical” 27.5? the only way your critique is more true than what’s on that sign is if you “cook” your tire sizes to make it so. Then who’s being disingenuous? .

I want a 26+ full suspension bike lightweight carbon along the lines of the Santa Cruz Hightower, slack and long. I think it’d be sick!