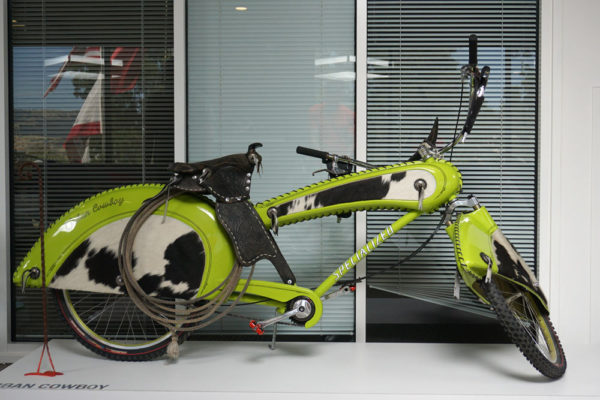 Now that the Fast Bikes have flown past, we’re on to the Fun Bikes from Specialized’s concept bike museum. Above is the Urban Cowboy, complete with horse saddle, lasso, cowhide and mini bullhorns. Check out the closeups and lots more wild and wacky cruiser and city bikes below… 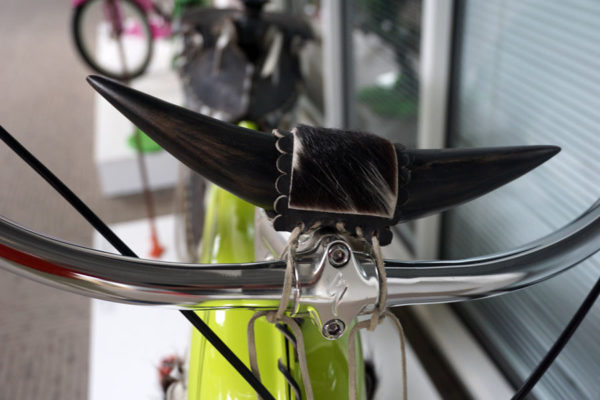 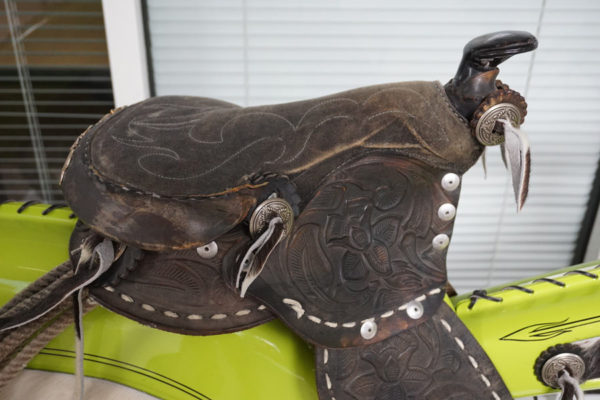 More than just slapping a few accessories on, the concept bikes produced by Robert Egger and team are full of details. Like leather stitching holding the fender and tube halves together. 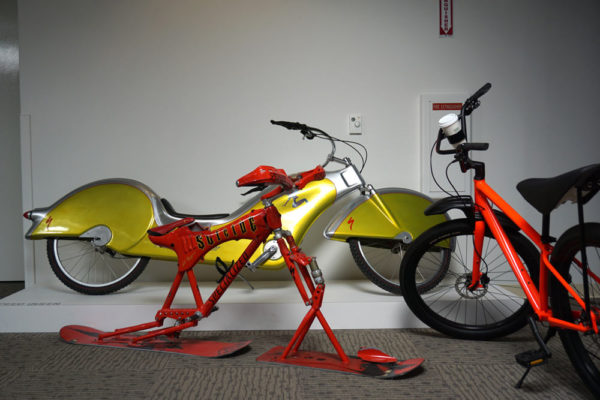 The Suicide Sled pairs sprung snowboards with foot pegs and a bike saddle. On the right is a commuter bike retrofitted with a banana seat and front fender. And a coffee mug holding handlebar. In the background is the Speed Queen… 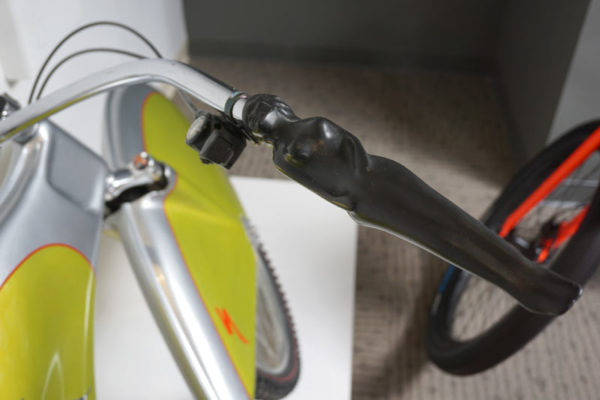 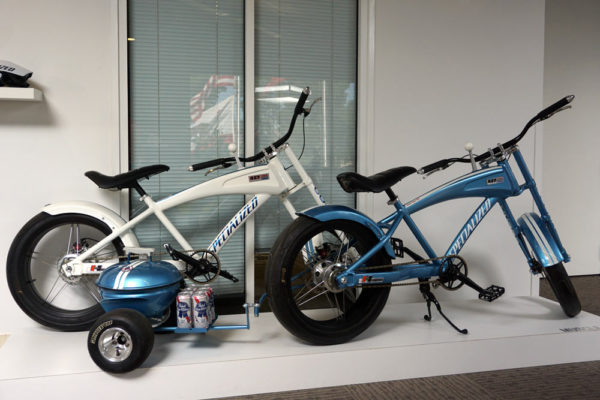 The Muscle Car cruisers borrow inspiration from the Ford Cobra and put a ball-handled shifter on the top tube. 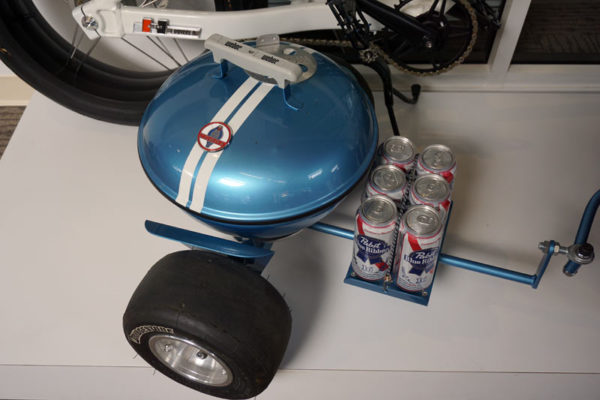 The trailer is a paint (and tire!) matched charcoal grill with six-pack tray. 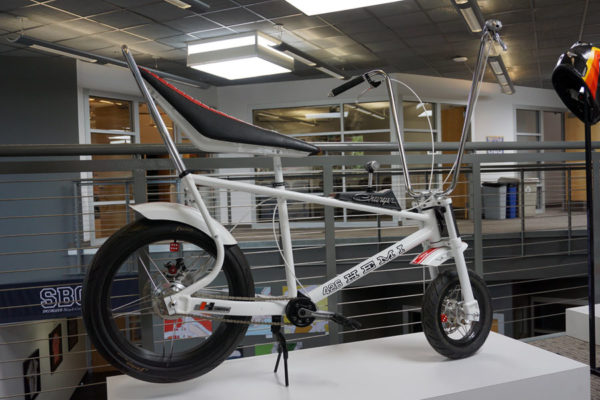 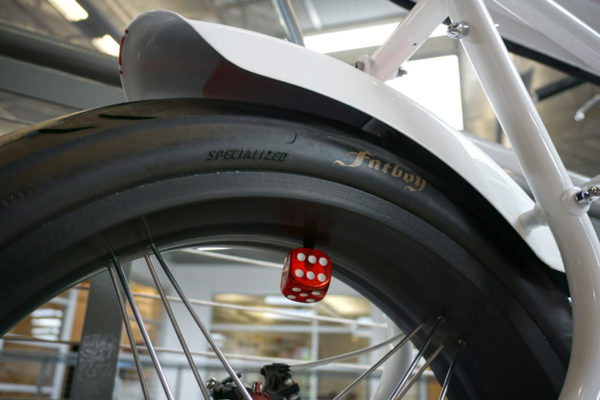 The Hemi matched the style with a Dodge motif. There’s no shortage of banana seat concept bikes on this level. 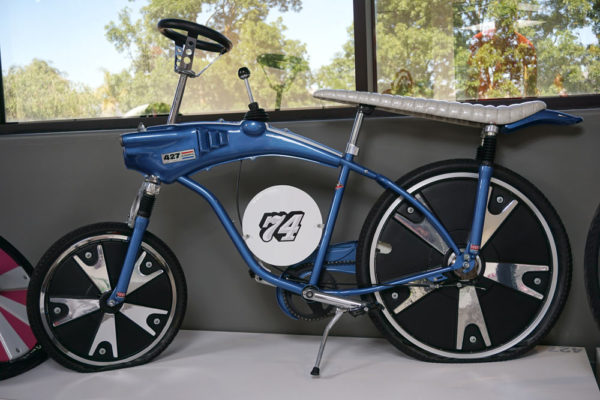 The Cobra 427 swaps in stylized headlamps and a steering wheel, and even sticks a paint-matched fender off the saddle. 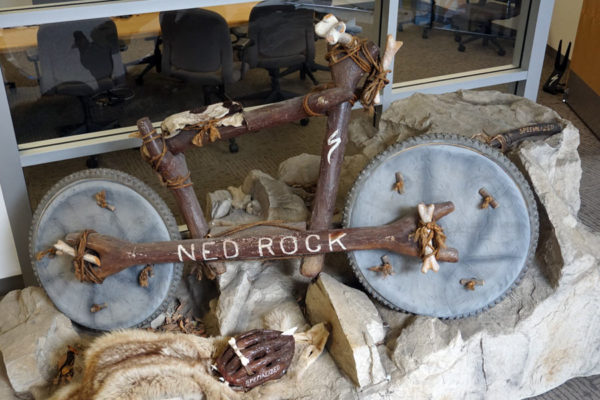 The Ned Rock is a play off their long-time sponsored athlete and product development consultant Ned Overend and their Hardrock hardtails. 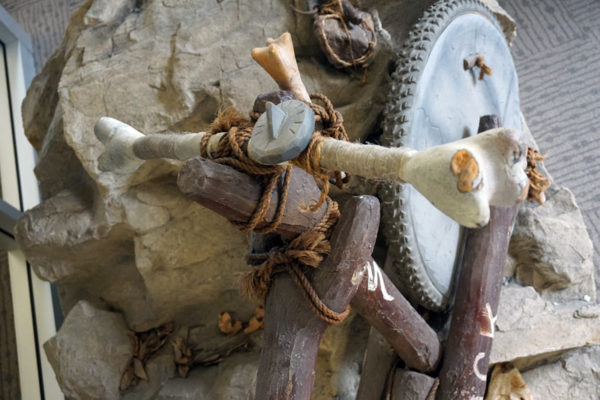 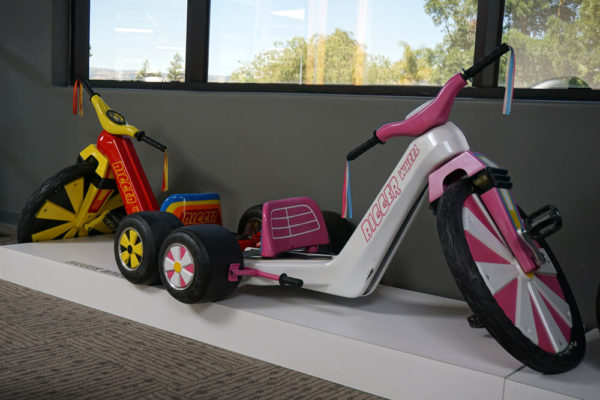 The Bigger Wheel gets a hand brake and streamers, and real rubber tires. 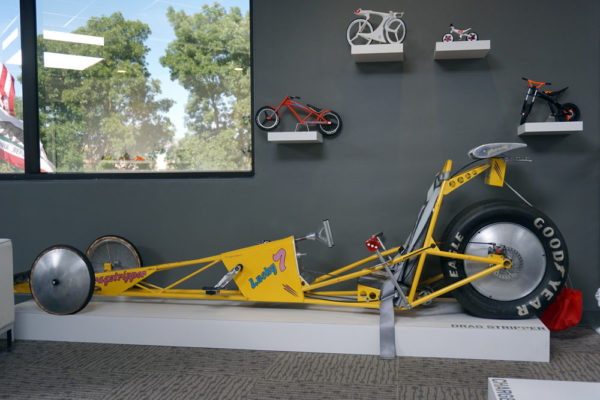 This one’s the Drag Stripper. Note the dice shift lever… 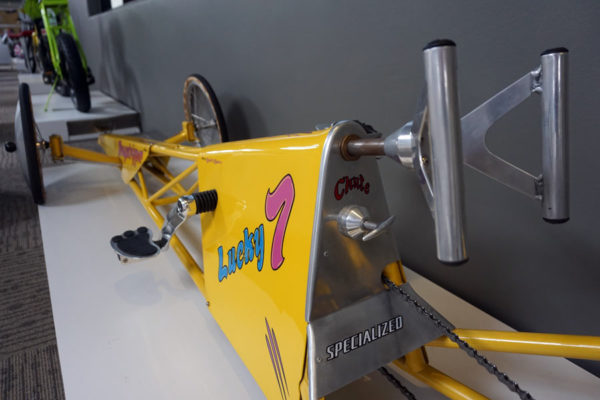 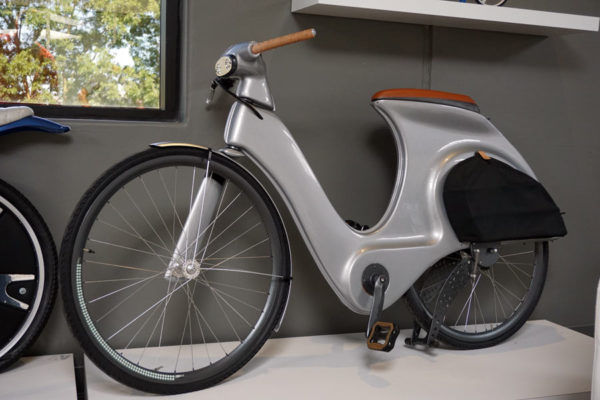 They’re not all super crazy. This Dutch-looking step-thru is tame compared to the others, but builds in clever touches like a single-sided fork, retractable kickstand, attached pannier bags, integrated saddle and slim fender. 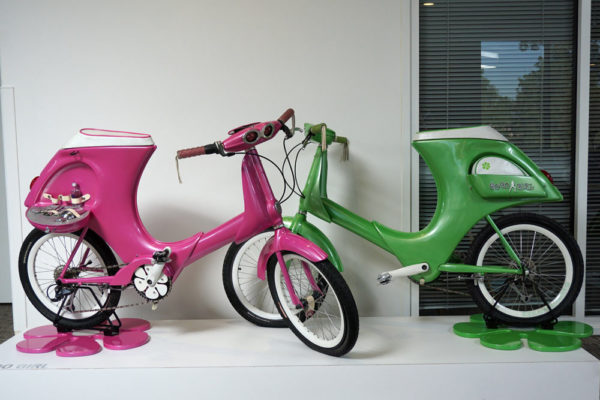 If you’re gonna bring the party, might as well Bring. The. Party. 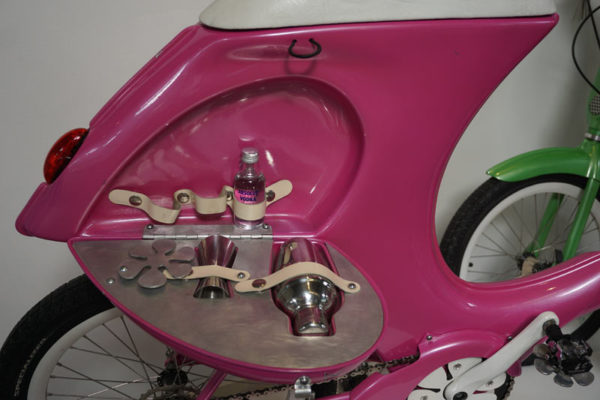 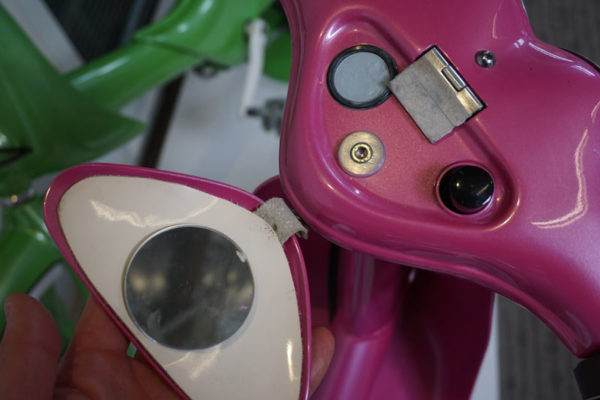 …and mini makeup counter up front.

Last but not least is the Police Strike Force bike. The story goes like this: They invited the local police station over to check it out, explained the features and everyone thought it was pretty cool. 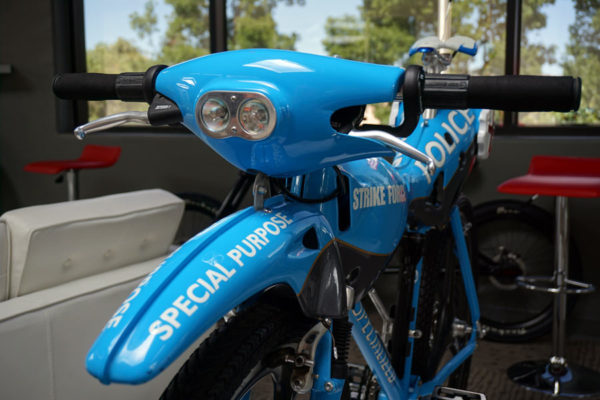 It had the lights, built in necessary accessories like a flashlight and emergency gear. And then they asked what this was: 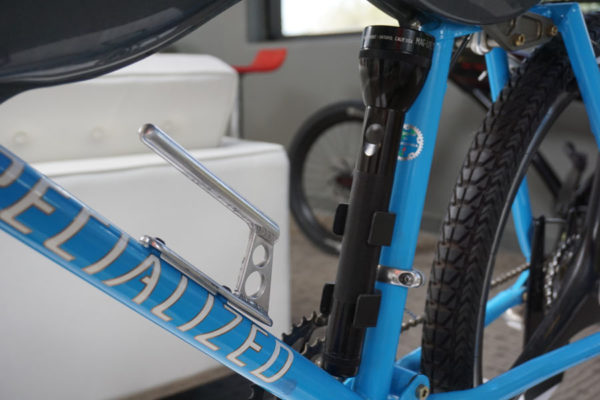 To which the Specialized person responded: “It’s a donut holder.” And the police officers’ smiles immediately disappeared, and the excitement was instantly gone. Still funny though. This, however, is not funny.

The “Ford Cobra?” There was the AC Cobra, which was a collaboration between AC motors and Carol Shelby and used Ford engines. There is the Mustang Cobra, which is a Ford, but not referred to singularly as a “Cobra.” Just once, please do a little research.

shut up nerd. this aint a car forum.

Right, because looking up and fact-checking that bit of automotive trivia would be a good use of a cycling journalist’s time. Jeez, get off your high horse.

Using the word “journalist” a little too loosely there.

Yep, because god forbid that you present accurate facts to people reading a story involving things possibly outside of their usual field of interest.

I didn’t come here to learn things damn it!

Well, I sure as shit didn’t come to the site to learn the finer points of hotrod esoterica. FFS, it’s called BikeRumor.com, not Road and Track.

Captain semantics to the rescue.

ford, chevy, shelby, who cares. this is a bike forum. just once, please get stuffed with the overly critical comments regarding a puff piece about pretty bikes. Also, if the question mark is not part of the quoted material, it goes outside the quote marks- “Ford Cobra”? – not “Ford Cobra?”

geez! do some grammatical research!

oh that youtube video was painful to watch. Rollerbladers, carbon wheels, and cops were so lame in the 90s.

No one has more fun than Egger, but I can’t imagine anyone has been more prolific in the realm of bike design, either.

When do we get to see where the bikes are made?

I tried to take a few pics in Egger’s lab and machine shop, but it was strictly off limits to cameras. There was some insanely cool stuff in there…hopefully it shows up in the museum in the future and we can head back for some fresh content.

Those dutch / vespa looking bikes are amazing – Still would like to see them produced!