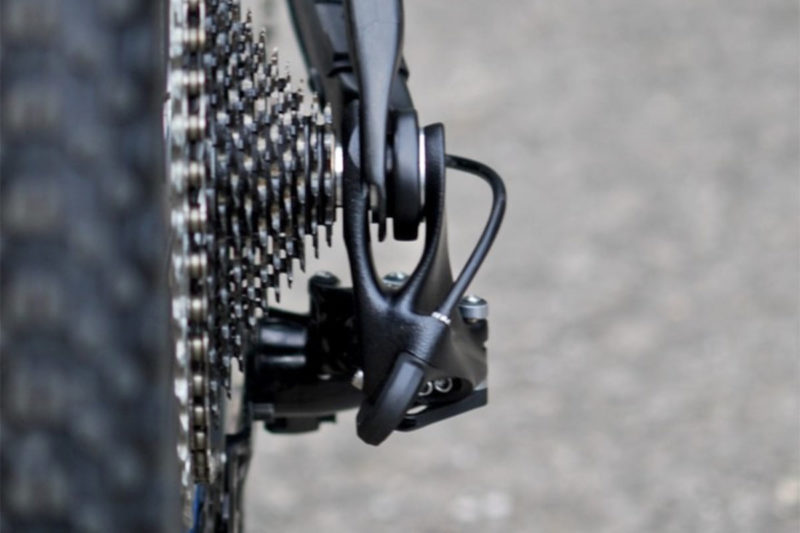 Spotted overnight on Ratio Technology’s Instagram, it seems they are developing a prototype Direct-Mount rear derailleur kit to work with SRAM’s latest UDH dropout/hanger standard. And in true Ratio fashion, it is a straightforward upgrade to old mechanical shifting gear that will likely bring much of the performance of SRAM’s as yet unreleased latest & greatest tech, but at a fraction of the cost for those tinkering with older components…

Updated with a bit more on the 3D-printing & compatibilities… 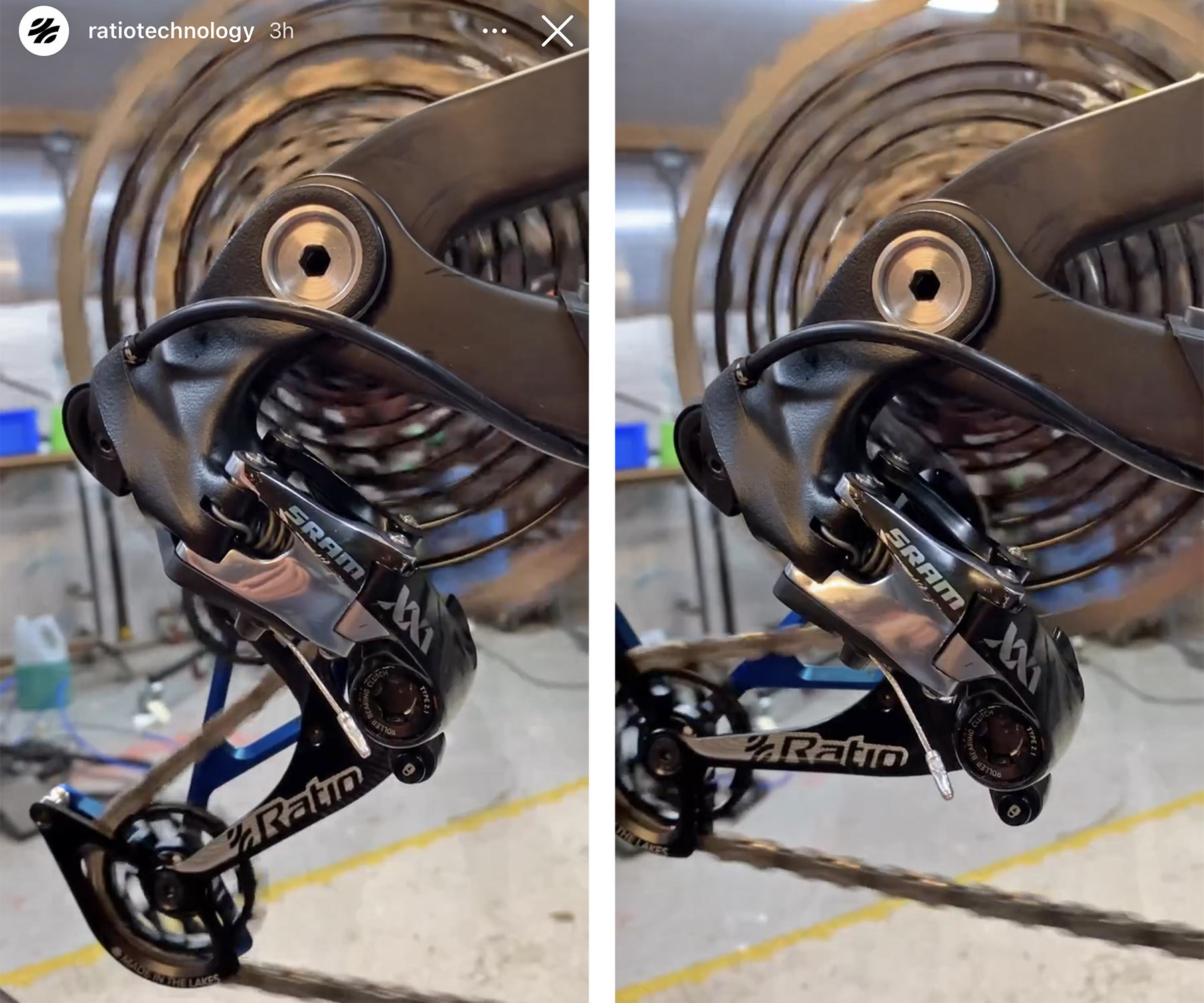 What details we really know about Ratio’s  Direct-Mount derailleur prototype still remain thin, but it looks like they’ve once again repurposed some old drivetrain gear to bring modern wide 1×12 gearing upgrades. And with a new direct-mount wireless SRAM XX1 AXS Eagle SL drivetrain rumored to be dropping any day now… perhaps Ratio could even beat the big drivetrain maker to market with a similar, but profoundly more affordable upgrade option…

The Ratio prototype setup started life as a 1 x 11-speed SRAM XX1 Black X-Horizon mechanical rear derailleur which would have been limited to a max 42T cog. 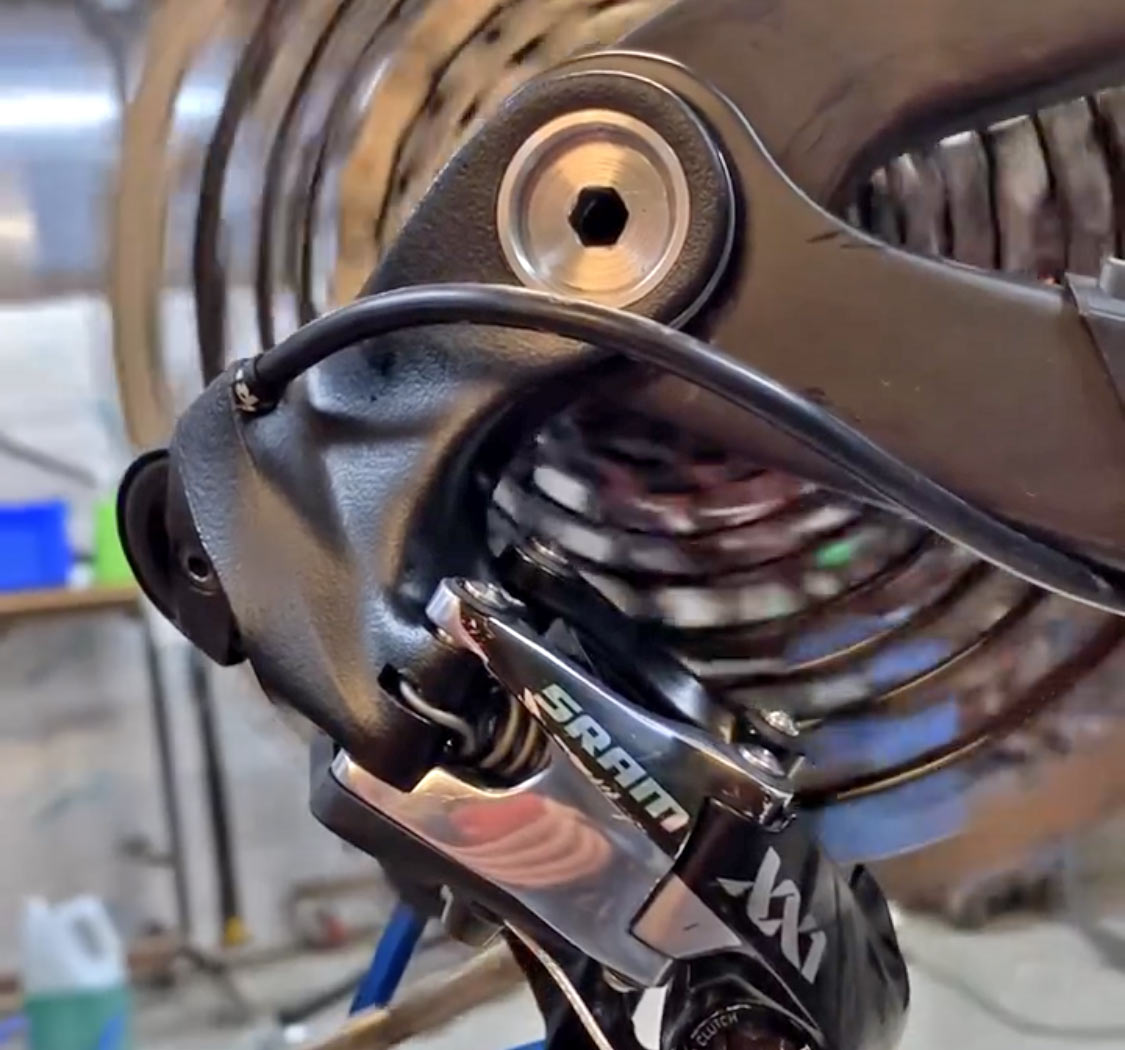 Then, it looks like they have entirely removed the upper B-knuckle – easy enough on this top-tier derailleur from around 2015 since its pivots were already rebuildable. And Ratio swapped in their own – – B-knuckle with a direct-mount interface to the UDH-ready dropout.

Update: Interestingly Ratio confirms that this one is actually 3D-printed nylon prototype. It’s apparently strong-enough and stiff-enough as a proof of concept that can in fact shift the gears. But Ratio says they will “be looking into alternative materials before we settle on the best solution.” 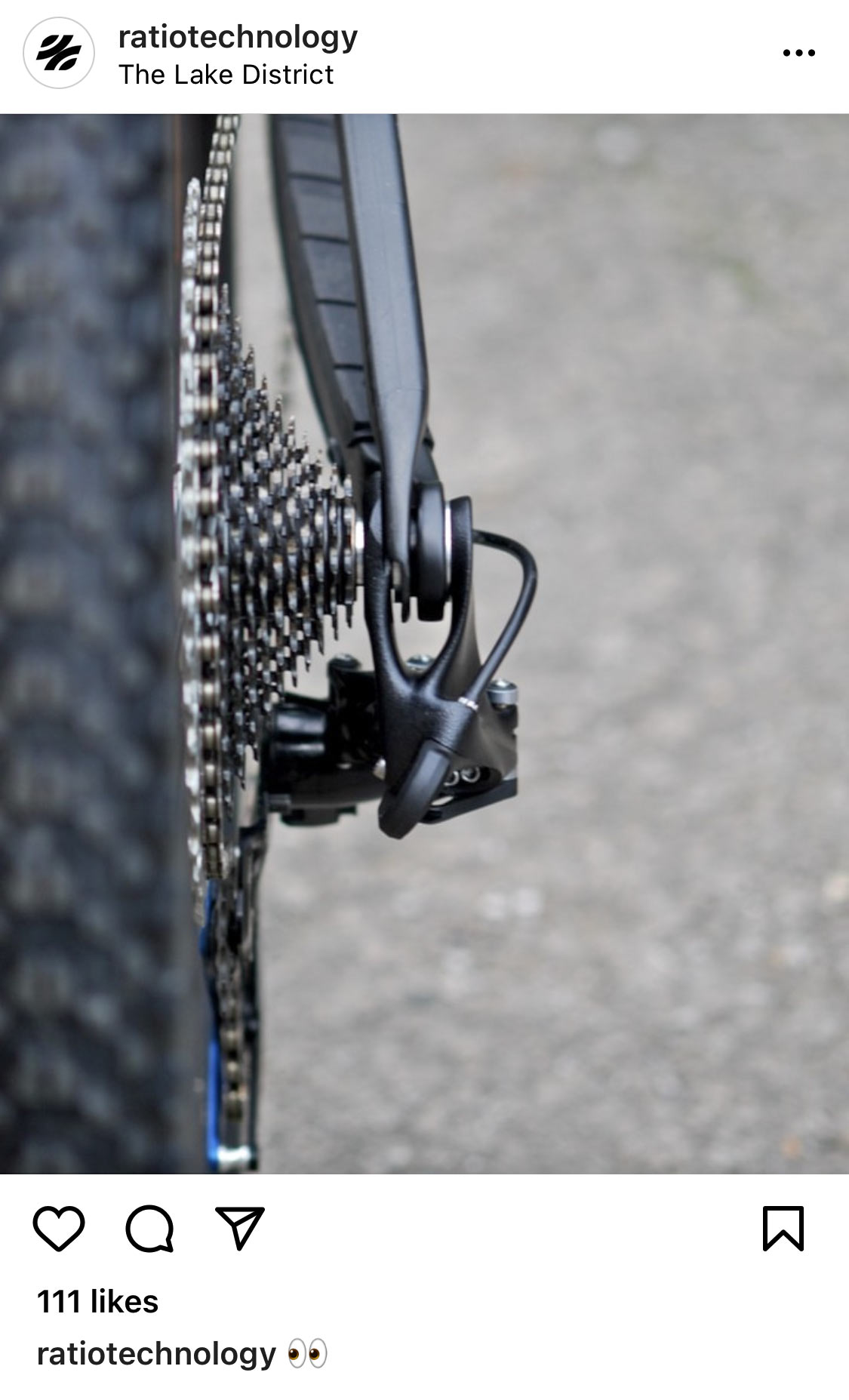 That’s it. That’s all we know for now.

But we’ve reached out for a comment, and will certainly be closely watching Ratio’s social media feeds for further teases and more concrete details.

Lots More Updates: Ratio now confirms that the direct-mount upgrade is “still early days” so things like pricing and final delivery timeline aren’t nailed down yet. They say the replacement is pretty DIY for someone capable, but the right tools make it much easier. So… they’re “hoping to be able to supply a kit with custom tools to help with the replacement and with future servicing of the derailleur” and will be able to offer replacement parts down the road – remember there’s no more sacrificial hanger to protect against crash damage.

Oh, and watch them hit that nylon prototype with a hammer above!

One of the most interesting comment from Ratio is this, “Our aim is for compatibility with the full SRAM 1x range“. That’s a pretty broad range for compatibility’s sake, and furthers their idea of democratizing wide-range modern drivetrains, quite a bit more.

They also recognize that not everyone loves the concept of removing the weka link derailleur hanger, and they say, “it’s fair to say we’re not in one camp or another yet, until we’ve completed our testing. However, the benefits to making derailleur mounting more accurate and repeatable are clear, as long as they don’t compromise other aspects of the design“. Ratio sees a ton of drivetrain troubleshooting that’s often fixed by straightening a hanger. Wrapping up with this, “If we do go ahead, we want our company and our products to be responsible. We’ll design everything to be as easily and inexpensively replaceable as possible.”

That’s certainly a refreshing perspective in a time of seemingly disposable products.

I love what these guys do

One of my favorite companies out there!!!

Seems like a great way to extend the life of some older gear, BUT, my concern would be for the ‘sacrificial part’ designation… With a replaceable derailleur hanger, you crash drive-side, the hanger is expected to break with a big enough impact. So, you replace the hanger and be done with it. Now, with a direct mount derailleur, do you: a) break the frame, b) break the derailleur, c) other?
I kind of like having a $20 part (the replaceable hanger) in my pack. The other options don’t thrill me.
Educate me please to the real-world benefits of direct mount…

This is my question also. I maybe get it if it’s like super light for the xc nerds, but beyond that, how is this better when I smash my trail bike into a rock than having a hanger that bends/breaks and saves my rd?

Well you already nailed it. The real world benefit is that these companies sell more derailleur.

SRAM claims the UDH DM lets the derailleur rotate out of the way when hit. Regardless, it does tuck the derailleur in better to avoid impacts in the first place. I would hope that Ratio would offer a crash-replacement deal and make this part maybe more accepting of failure than its neighbors.

So you get perfect derailleur alignment, as the derailleur mates partly with the wheel, NOT to a dangly bit that bolts to a squiggly frame part that holds the wheel, more or less. You get fewer impacts since the mech is tucked further away.

I’m all for the UDH design to take off in a big way (and it is), but I’m not convinced of this derailleur system’s superiority. Heck, I’m not convinced derailleurs should have the format they do at all – look at the Lal SupreDrive, or the Rene Herse derailleur, not to mention gearboxes. I feel like we’re going to get an infusion of great derailleur systems pretty soon – Rivendell is working on a Rapid Rise derailleur, and I’m sure there are more. Let’s get weird with them.

How is it tucked away if the pulleys start in the same spot? My hunch is that the push to a SRAM DM setup is a ploy for more OEM sales.

So you get perfect derailleur alignment, as the derailleur mates partly with the wheel, NOT to a dangly bit that bolts to a squiggly frame part that holds the wheel, more or less.

Well, that may be true, but you wouldn’t even need “perfect alignment” if you didn’t have crazy-finnicky 12sp drivetrains

Direct mount derailleurs will improve shifting but they’re more fragile and expensive to replace. I just fell on my drive side and bent the hangar. After $30 at my LBS to realign it I’m good to go. If I had this, $300 easy.

It’s actually way worse. Instead you are replacing your cracked frame. Hangers are designed to break so your frame doesn’t.

Incorrect. If you had this, you wouldn’t have had to do anything. Bikes used to be able to fall on their right side with no issue.

Someone should make a UDH mount with a threaded hole just like a regular rear derailleur hanger.

It is a good way how to prolong the lifespan of the older derailleurs on the newer frames for sure. However, replacing a b-knuckle is not as dead easy as looks. You have to press out the joint pins and parallelogram bushings.

Improved functionality, reusing old gear and 3D printing. What’s not to like.