Sometimes it takes an outside eye to put two and two together. Recently, SRAM introduced a universal derailleur hanger concept at Eurobike that has a lot of potential benefits. A single hanger across brands would mean replacements would be far easier to find, and the hanger design itself has a lot of cool features that improve on the standard design. But as a reader just pointed out, it may also have implications for the design of the derailleur itself.

Back in 2018, we covered a patent from SRAM that involves a coaxial installation for a rear derailleur. To put it simply, the design mounts directly around the axle without a derailleur hanger. The patent discusses the differences in tolerances between existing hanger designs and also notes the increased forces on the derailleur hanger from longer derailleurs needed for today’s huge cassettes. The direct mount derailleur would theoretically improve these tolerances and offer a stiffer, more precise shifting platform which could be necessary for future drivetrains (more speeds?). 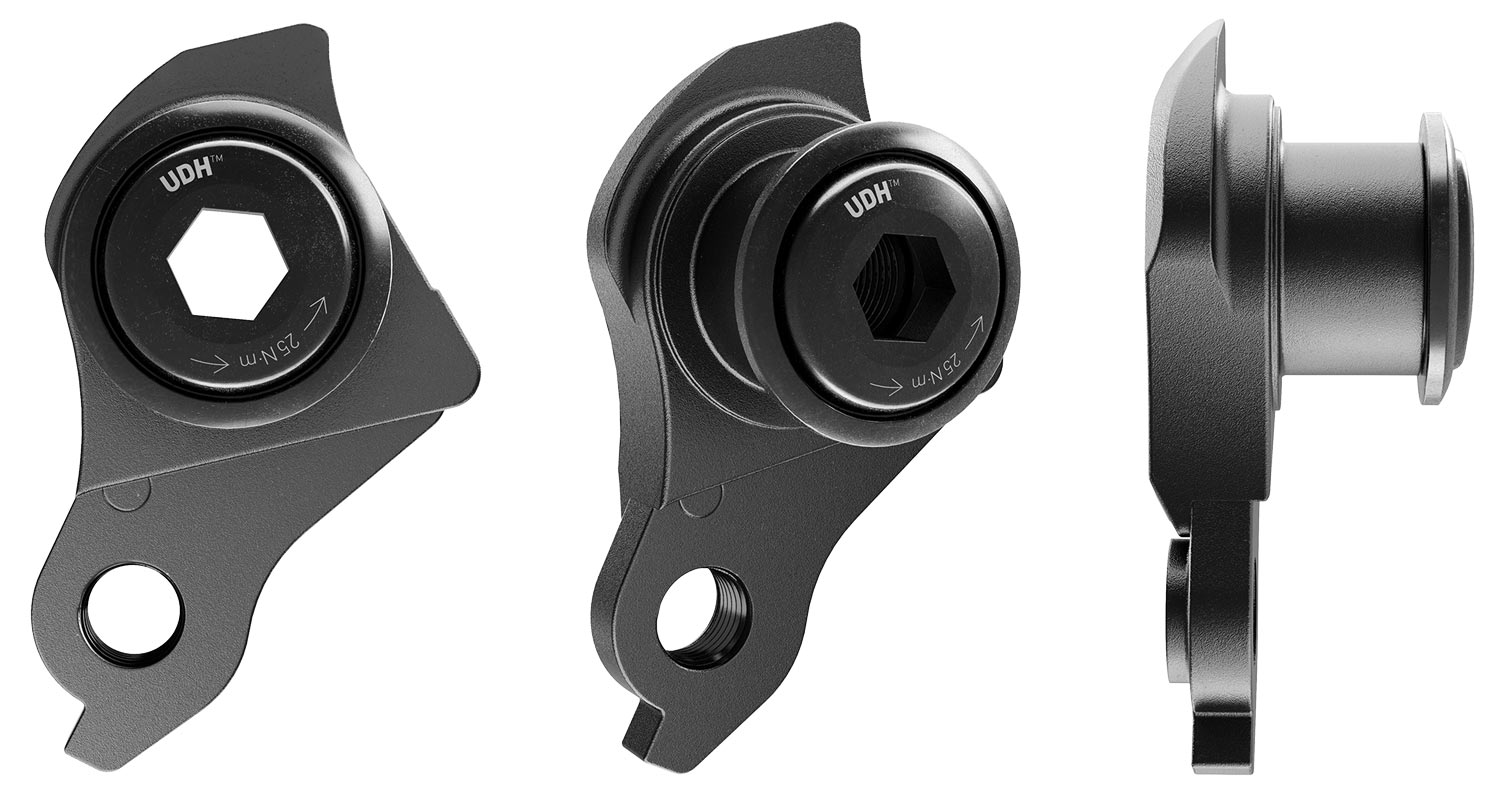 But a big stumbling block to the design would be the difference in current frame designs. In order for direct mount derailleurs like those in the patent drawings to work, you would need some kind of universal standard… like that provided by designing frames around a universal derailleur hanger (or as a friend pointed out, what was already offered through a design like Shimano Saint where the derailleur bolted to the end of the axle).

While this is all purely speculation, it looks like SRAM’s universal derailleur hanger concept would result in a frame design that you could simply remove the universal hanger, and instead mount a direct mount derailleur. That way, the frame would be compatible with standard derailleurs that currently exist (with all of the improvements of the new hanger design), and they would also be compatible with this new derailleur design. Everyone wins, right?

A coaxial mech mount is dumb, really, really, stupendously dumb. You remove a $15 disposable part and in the process place your $300 derailleur and $2500+ frame in the firing line in it’s stead. It’s a very SRAM way of thinking to add expense and remove reliability. Also, Syntace solved the hanger issue a decade ago with the X-12 hanger and it’s hollow breakaway bolt. Those things are genius, cheap, reliable and they have saved a couple of my rides.

happy to see someone in the comments who knows what he/she is talking. Also, shimano sooner or later will be back on bikes, and they will not use any sram standard, not to mention they are going back and forth between rear der types, their new direct mount is out in the new groups.

The best rear der hanger designs I have found are the syntace indeed, but also the new specialized rear hanger used in the latest sworks hardtail; it needs no bolt, the whole hanger is the bolt and it is placed on the outside of the frame, so it is a lighter and simpler one piece design.

In any case, bike manufacturers do not want to agree on standards; to replace a thru-axle, they could already have thought about a real standard, quick release was easy, now axles are pretty much brand specific. same on forks, different thread for sram and fox…

I find the new two-piece Specialized hanger on my Stumpjumper to be a colossal step backwards. Its not very stiff, the threads aren’t very deep, and it doesn’t take kindly to alignments. I don’t think the Syntace design was much better. If the indexing notch in the frame was over-sized (they usually are), then the hanger could float laterally and shifting was variable.

I think the answer is for stiffer, more robust hangers. Shimano Saint used to have an axle mount, and I would welcome that interface if we are going to have to deal with more gears in the back. 12 is already pushing it with a lot of these flimsy and proprietary layouts.

You think it is possible to break a hanger but the derailleur at the same time?

Wait – are you telling me they figured out how to attach a derailleur to a frame using a piece of metal attached to a wheel axle! Holy hell – why has nobody thought of this before. Mind Blown.

Interesting. I was wondering why the UDH didn’t use the axle to pull the hanger “through” the frame and a secondary inside-out fastener to keep it in place without the wheel. This could be one reason why.

I’m with it. Any way to get someone to have to buy a new bicycle sounds like a good idea to me. I’m sick of people riding around on 10 year old antiques. Had their frame cracked from derailleur failure in year 3, they would have a nice new frame problem solved.

Counting the ways that a singular unit is a bad idea is certainly not hard. Plus, what would I do with my FAG-2 and DAG-2?????

That coaxial derailleur looks slightly lighter and stiffer than a current design but that looks super pricey if you crash the wrong way.

I believe your statement should be “when you crash the wrong way.” It’s a when, not an if.

every hanger is universal…..if the bike is designed around it… universal hangers have been standard until the second one was created

All of you naysayers are assuming part #20 in the drawing wasn’t also replaceable. Looks to me like it is.

I think you’re assuming part #20 will bend and the derailleur won’t. I don’t think that assumption is justified.

There are no modern derailleurs where the equivalent part is replaceable. That part includes the parallelogram pivots which typically can’t be disassembled. They could design it to be replaceable, but they won’t.

There are no modern derailleurs where the equivalent part is replaceable because there has never been a concept like this with modern materials and manufacturing processes that allowed for it, or the will for such a product from a brand like SRAM.

A rebuildable derailleur is not in the commercial interest of a company whose product line is refreshed often, I get it. It may never happen, but this is the closest I’ve seen to such a thing outside of the hobby machinist derailleurs of the 1990s that were more of a canvas for the anodizing craze.

I used to assume we were in the last days of derailleurs, but I have evolved on this. I still think the giant cassettes look weird, but they seem to work.

All you people are b*tching about a thing that hasn’t even been made yet. That patent application is a year old, and Sram has done nothing with it yet.

Not to mention a main feature of the design is the ability run ANY current derailleur.

This looks unnecessarily complex for no advantage over what’s currently offered. And potentially expensive to repair. Thanks $RAM.

I wonder how often you bend your hanger. In 10y I never bent mine. I take jumps, drops rocks.. probably got a bit lucky and did break other things but I suspect this whole derailleur thing is a lesser deal than people make it to be.

I go through 1-2 a year between my bikes and keep a spares for each bike on hand. There’s no way I’m interested in replacing my derailleurs that often

For all the guys here that are ultra knowledgable about SRAM products who are insisting that the derailleur will explode when it takes an impact, you don’t know as much as you think you do. https://youtu.be/LEbJRmNgD8E?t=169

I would just be happy if my derailleur hangers didn’t go out of alignment if I so much as sneeze on them or stare at them too hard…I get the hangers on my road bikes straightened and six months later they aren’t straight anymore. No crashes, and not just on one bike pretty much all my road bikes do this. Interestingly the only bike that still is straight a year later is my Giant MTB. None of my road bike hangers stay straight.

I have not broken a SRAM rear derailleur since 2001. They’re far tougher than the competition products and they last a lot longer.