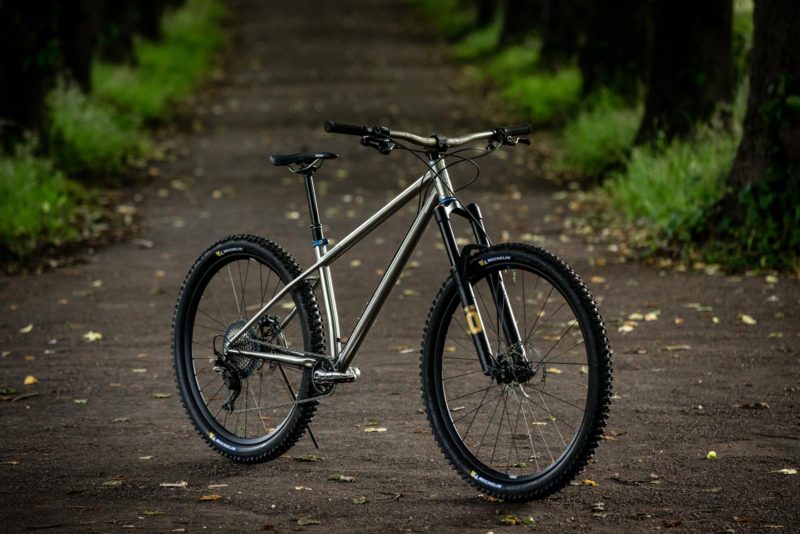 Hot on the heels of the Sturn V2 Jack Drive Downhill Bike is the new Starling Roost, a rather more earthly 140mm travel stainless steel hardtail. The Roost is Starling’s first punt at a rigid rear end. It rolls up on a mullet wheelset with a geometry that isn’t quite out-and-out “Hardcore Hardtail” territory, though it sits much closer to that end of the spectrum than it does XC. Starling describe it as a ride-wherever, ride-whatever, tough-as-nails stainless do-it-all that’s built to take on whatever you can throw it at. We have the details but first, a shreddit. 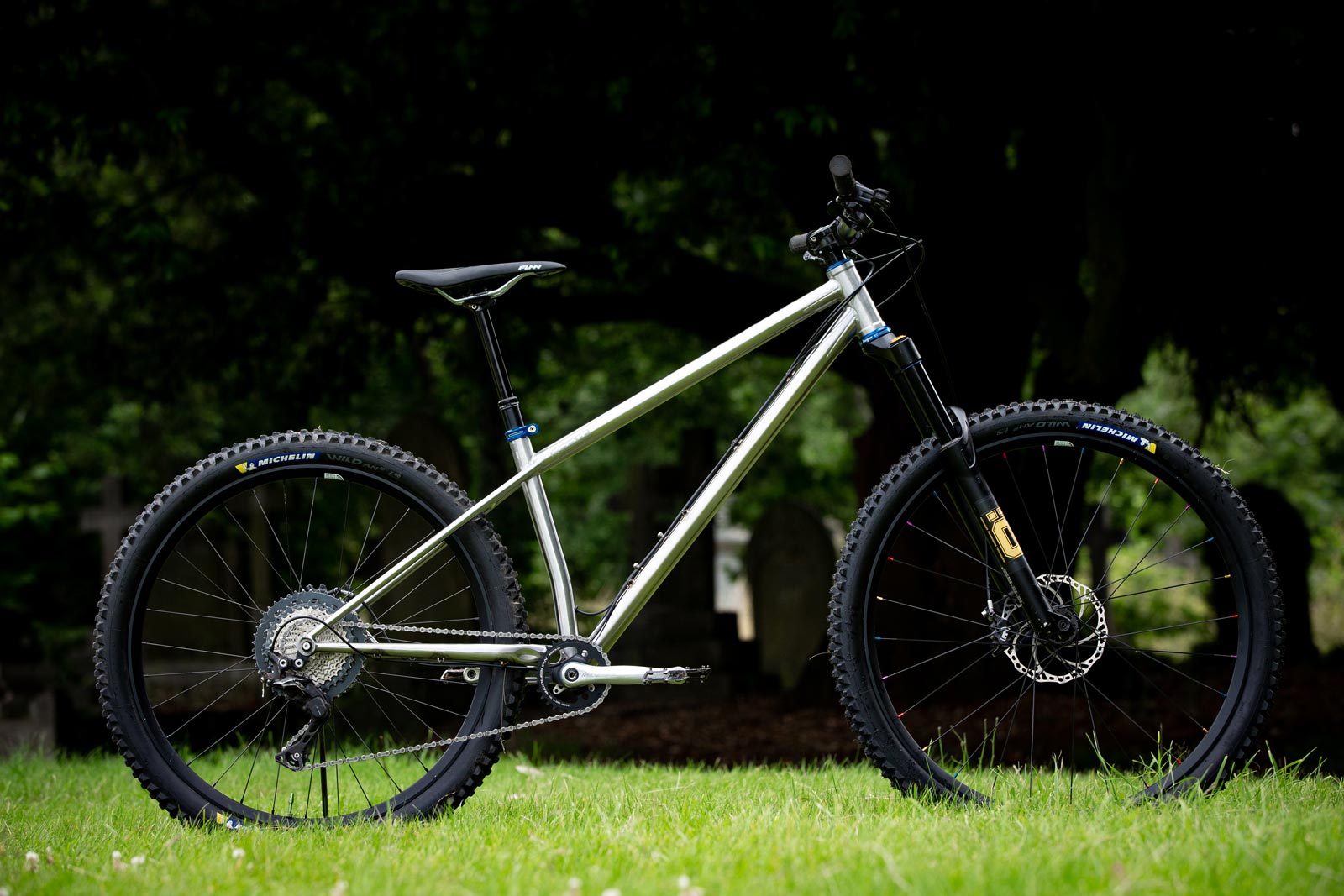 We’re getting the Starling Roost in for testing over winter; stay tuned for a review

Joe McEwan, founder of Starling Cycles, has been producing beautiful steel frame full suspension bikes since 2016, all of which utilize a simple yet incredibly effective and elegantly executed single-pivot suspension platform. Though more complex to develop, a gearbox bike, a Jack Drive bike, as well as 27.5″ and 29″ long-travel enduro bikes were all way ahead in the queue of the humble hardtail.

Though the first bike frame Joe ever built was indeed a hardtail, this is the first one we’ve seen go to production. Most of Starling Cycles’ frames are hand-built in Bristol, though a select few are made by ORA in Taiwan; this is one of them.

Roost geometry is optimized around a mullet wheelset and a 140mm travel fork, giving rise to a 64° head tube angle paired with a 76° seat tube angle. Starling tell us that while the 140mm fork is recommended, the geometry can also work well with anything from a 120mm fork up to a 160mm fork, depending on what your tolerance is for the steeper or slacker HA and the higher or lower bottom bracket that will come with it. 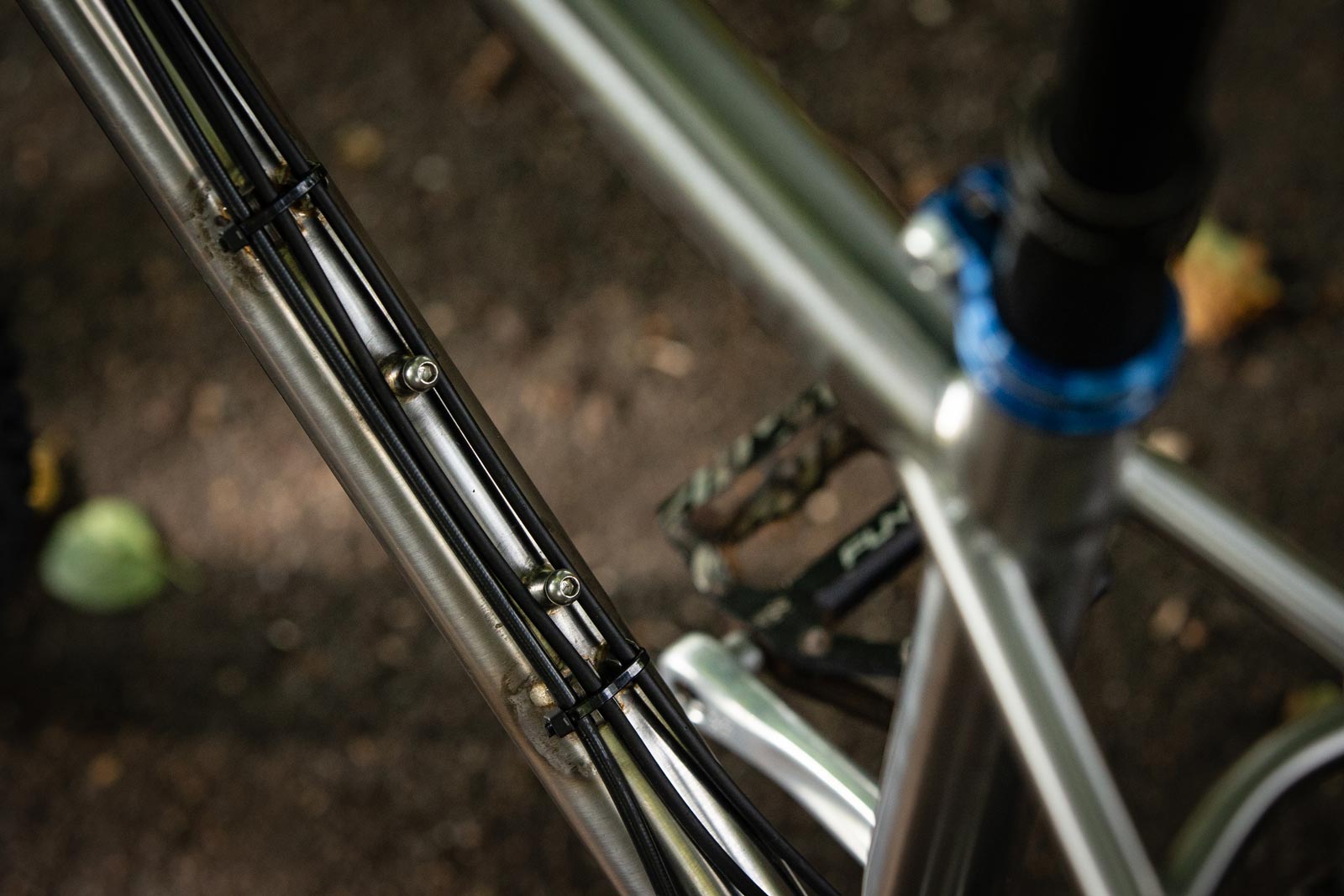 Cable routing is external on the Starling Roost. Despite heaps of room in the front triangle, the bike only gets one set of bottle bosses.

The Roost isn’t Starling’s first mixed-wheel bike; the Twist 160mm enduro bike is a combination of their Murmur 29er and their Swoop 27.5″. We do wonder, though… why did Starling go for a mullet setup on their first ever hardtail? Seems a bit out there, no? Joe says, “Personally, I love 29″ wheels on my full-suss, but for a hardtail I’m happy to trade a bit of stability for the fun and pop-ability that the shorter stays a 27.5″ rear end allows”. 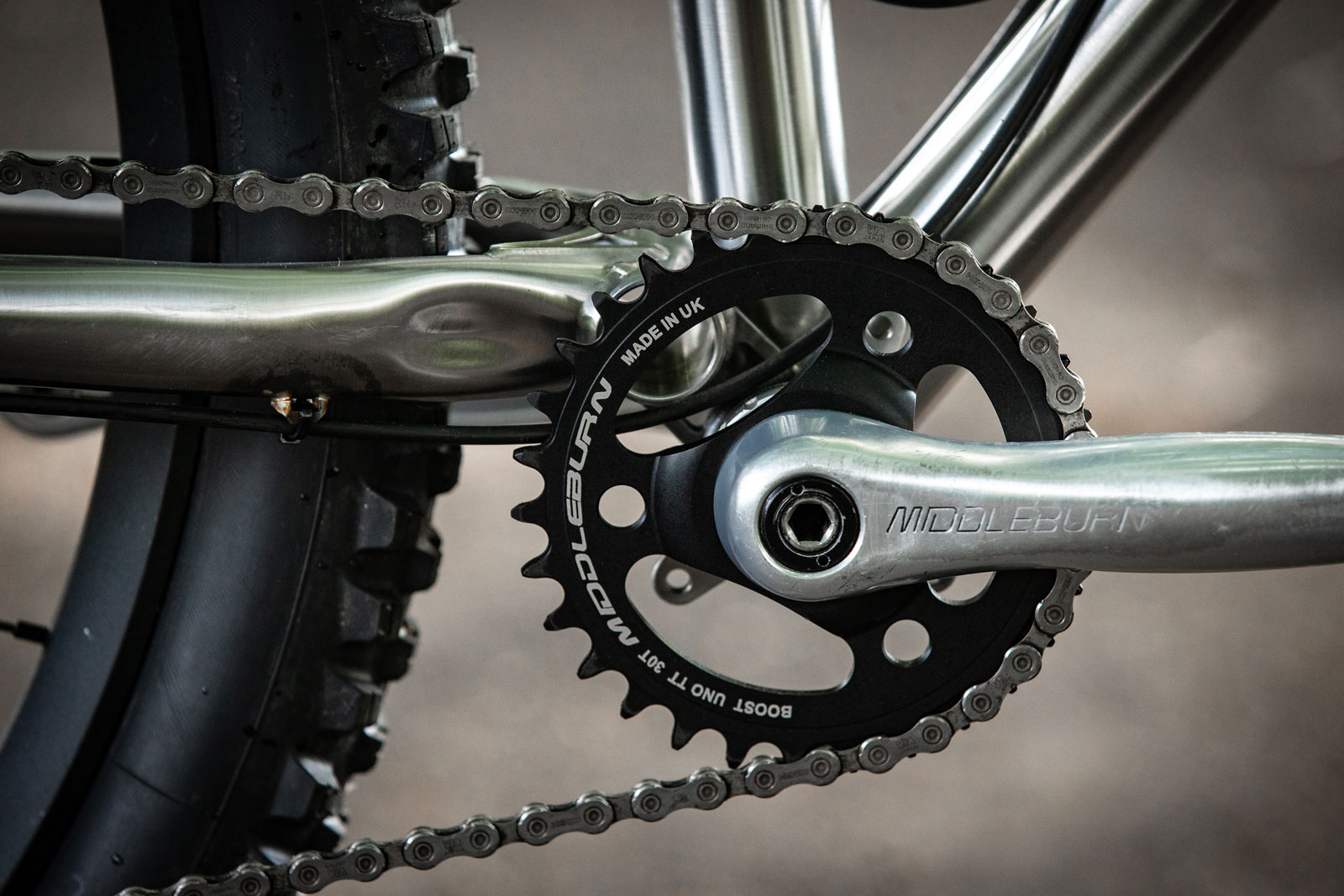 Indeed, the chainstay is fairly short. Here, Starling took a proportional approach to the geometry of the Roost, increasing the length of the chainstays with increasing reach numbers through the M-XL frame size range. Starting at 425mm on the medium frame, stays lengthen to 430mm on the large and 435mm on the XL. The boost rear end and bend in the chainstays means there is plenty of clearance for up to a 2.8″ wide tire. Max rotor size is 200mm. 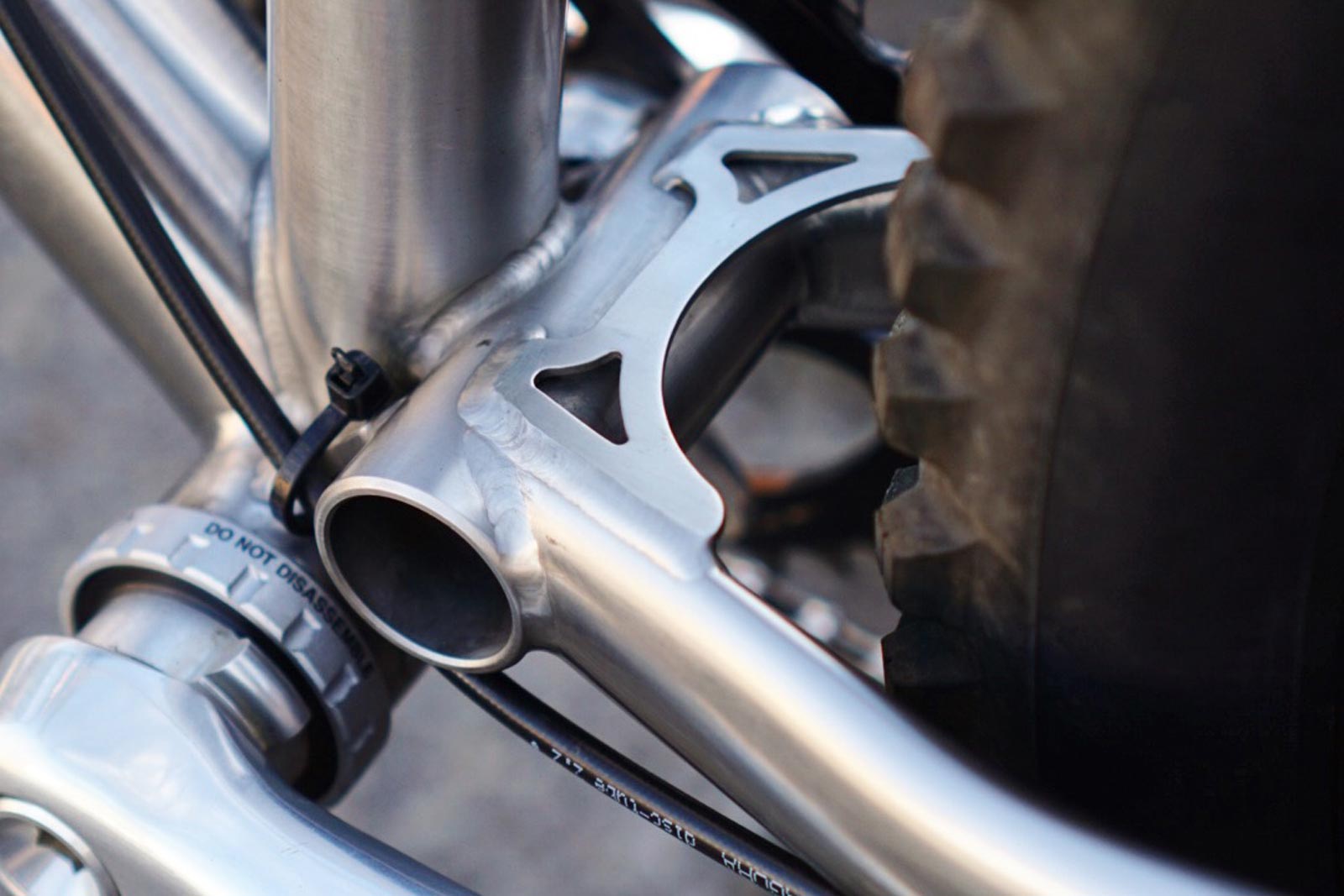 Those stay measurements are paired with a 440mm reach in medium, 475mm in large and 505mm in XL. See the complete geometry chart for the Starling Roost hardtail below. 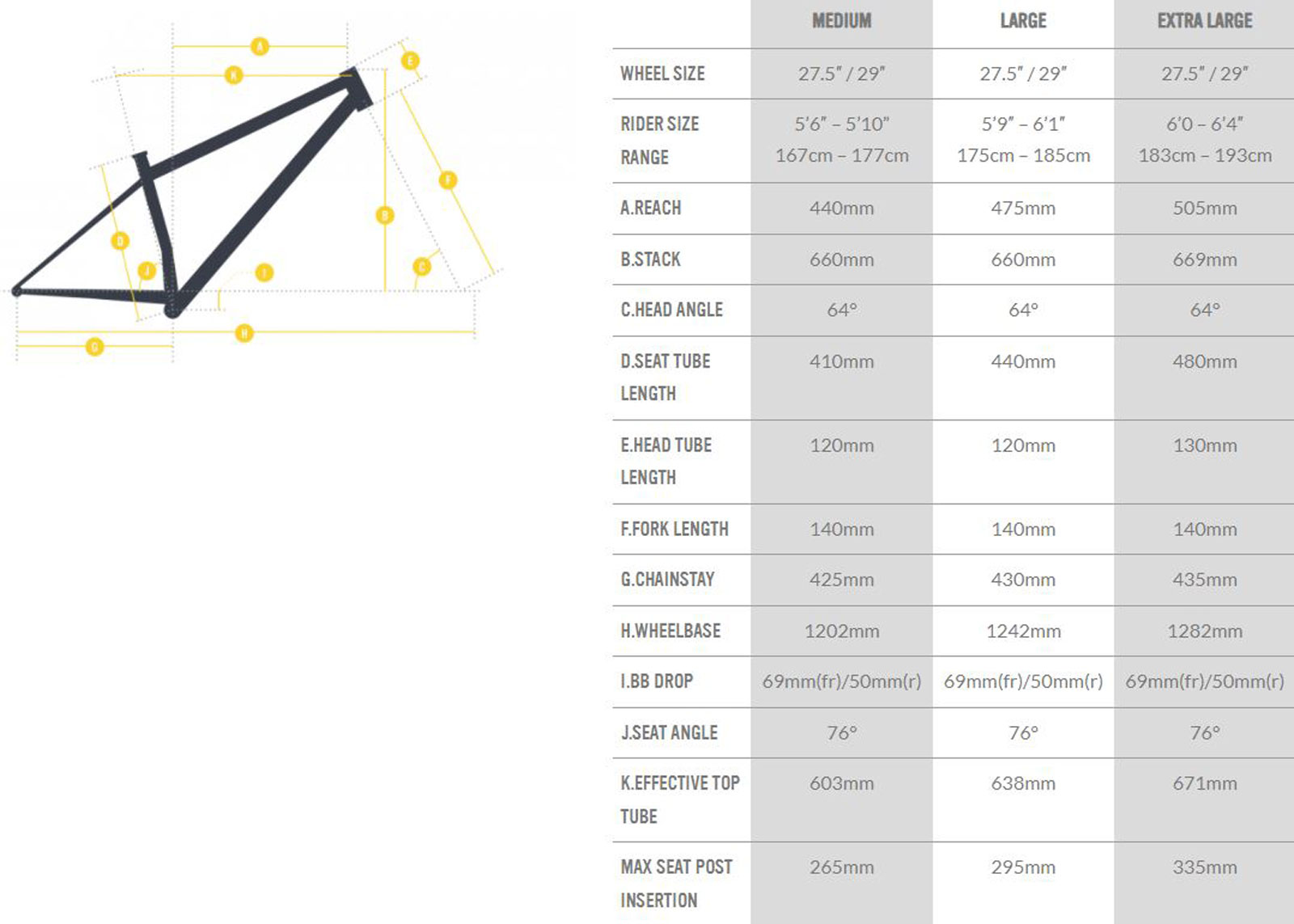 The Starling Roost is available for pre-order now, as a frame only or as a complete build with components from Ohlins, Rockshox, Hope, Funn, Magura, Bike Yoke, Michelin and CushCore. Frames retail at £1,220. Shipping is due early April 2002.

Complete with front hose way too short and rotor on backwards! Someone needs to double check their work before they submit promotional photos.