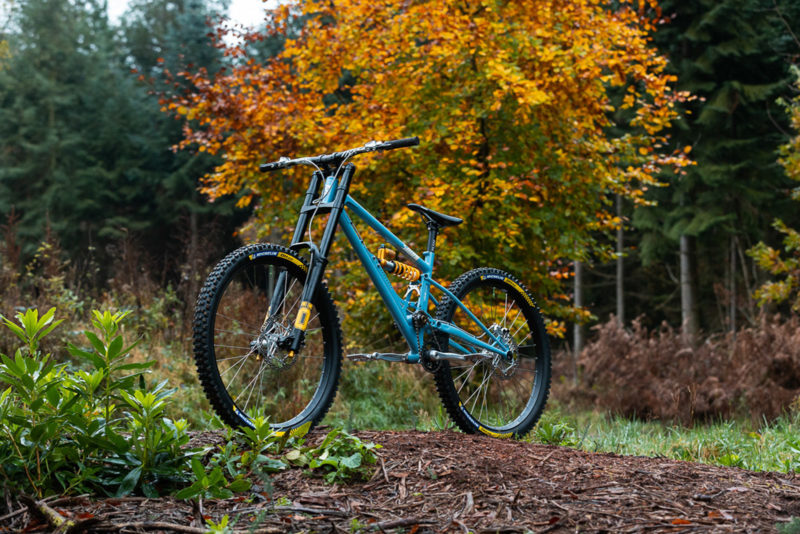 British steel mountain bike manufacturer, Starling Cycles, has signaled the return of the Sturn; a Single-Speed Jack Drive Downhill Mountain Bike. This is actually the second iteration of the rather niche yet race-winning rig, hand built in Bristol with the input of suspension experts at TF Tuned.

The idea behind the original Sturn was to create a high-pivot downhill bike that suffers zero chain growth as it is pushed through its travel; a chain idler is the most commonly seen answer to that problem, but Starling are of the opinion that a Jack Shaft is the lower friction solution to reducing chain forces. After selling just a handful, founder Joe McEwan decided he wasn’t quite satisfied that the bike was everything it could be, so set to work updating almost everything, from the pivot location, to the Jack Shaft solution, making geometry compatible with a mixed-wheel setup along the way Here’s more.

Joe McEwan, founder of Starling Cycles, maintains the Sturn V1 always worked very well, but that the Jackshaft and chain tensioning solutions weren’t quite as refined as he would’ve like. The V2 incarnation set out to address those issues, with a complete redesign of the bottom bracket and main pivot region, as well as a new proprietary Jack Shaft solution.

Wait up. The vast majority of downhill bikes are geared so, why would you want a single-speed bike? Joe says they will make you a geared version of the Sturn (something more like the Starling Staer) if you ask very nicely, but he is very much of the opinion that single-speed is where its at. 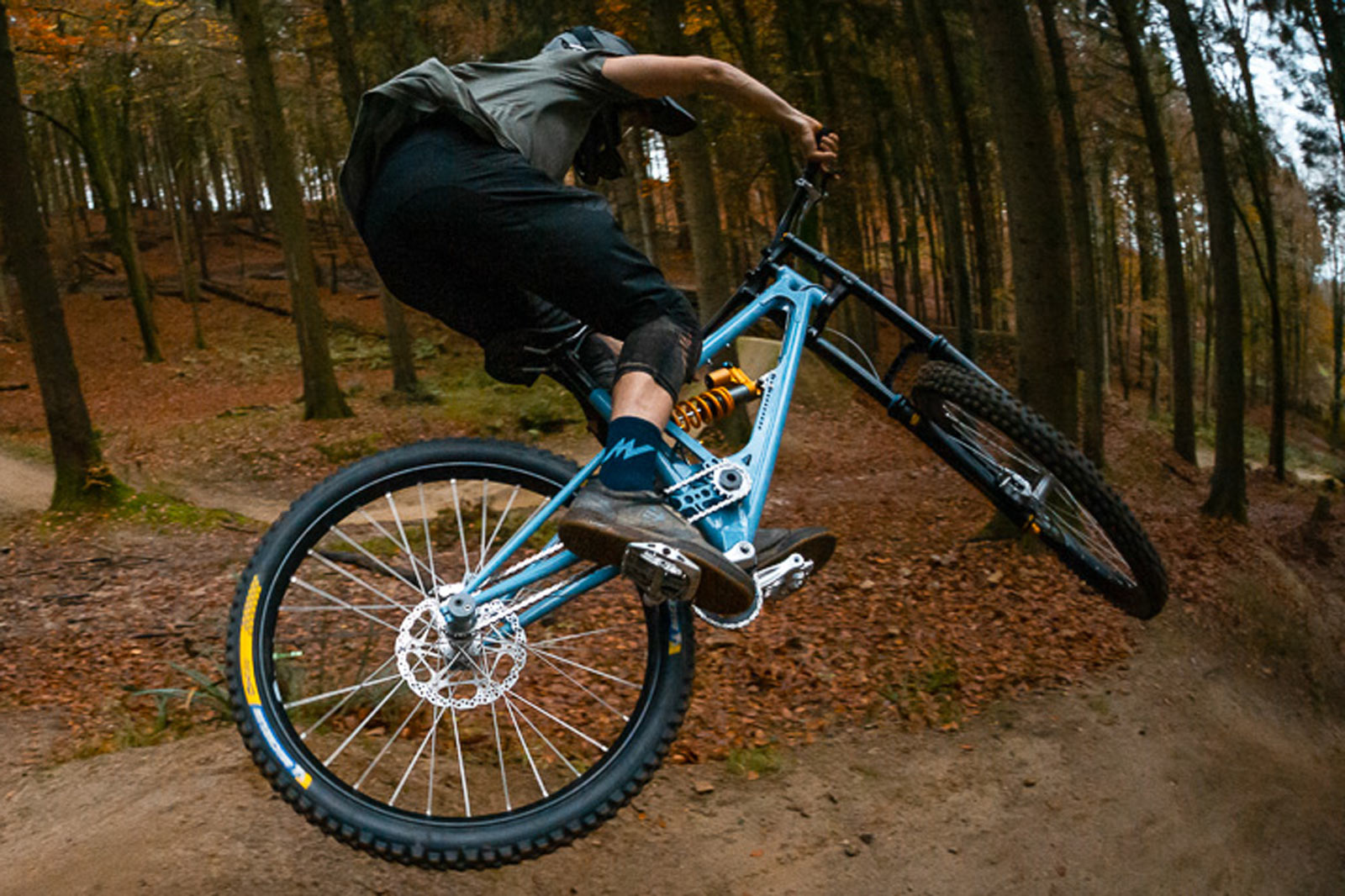 A huge reduction in weight at the rear wheel represents a big drop in unsprung mass, with Joe’s Jack Shaft solution placing more weight centrally around the bottom bracket area, two things widely acknowledged to result in improved suspension performance. Aside from that, if you’ve no gears to think about on a race run, it stands to reason you can pay more attention to where you’re going, thus (maybe) getting there faster. 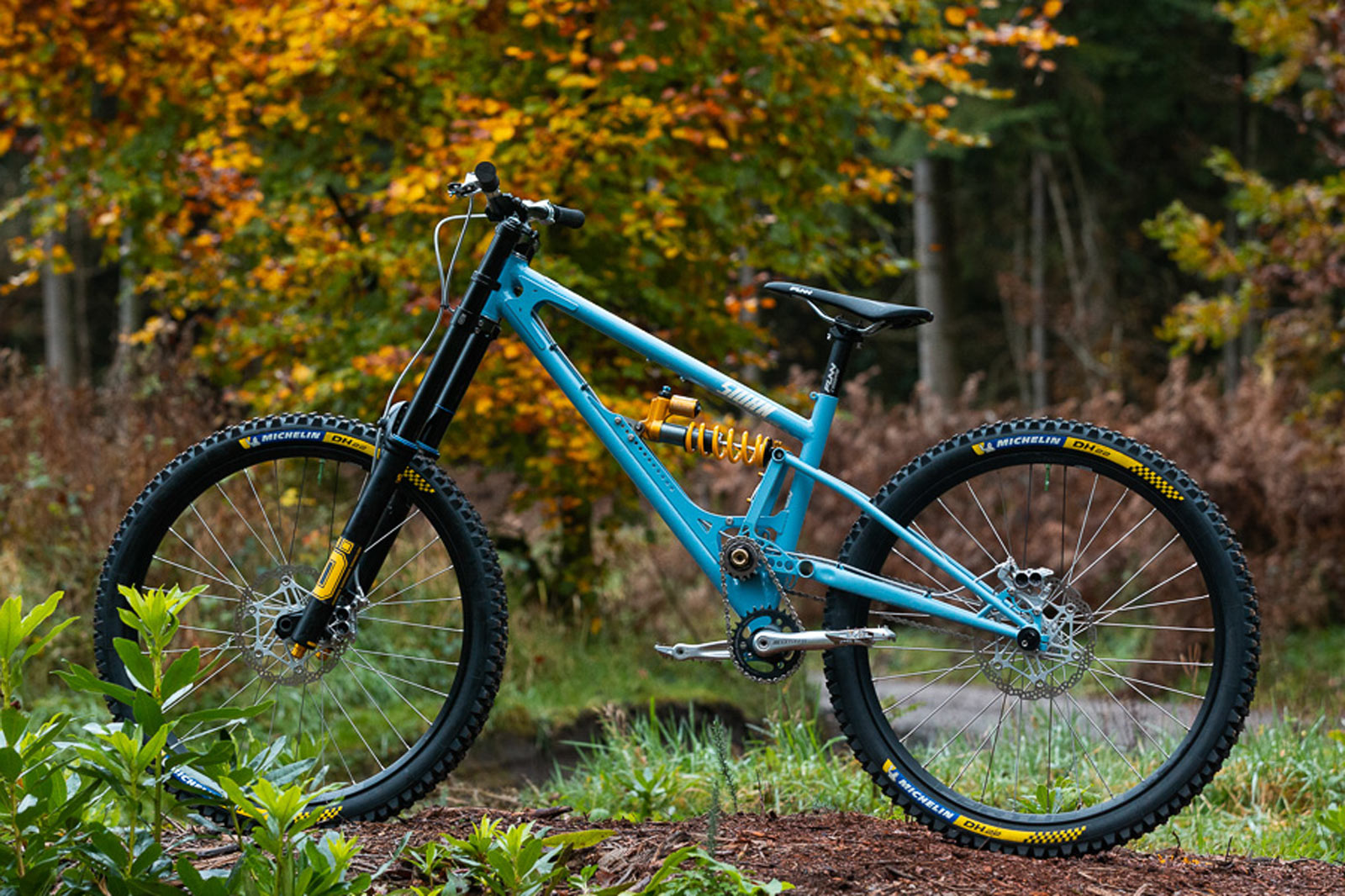 Like all Starling bikes, the Sturn gets a simple yet beautifully executed single-pivot suspension layout, though here the main pivot is pretty high; 140mm north of the bottom bracket to be exact. That results in a majority rearward axle path, resulting in an effective rear centre length that grows, rather than shortens, as the bike is pushed through its rear wheel travel. To be more specific, on a 27.5″ swingarm, the rear wheel goes through 123mm of its 200mm travel before the rear axle starts tracking a forward path. 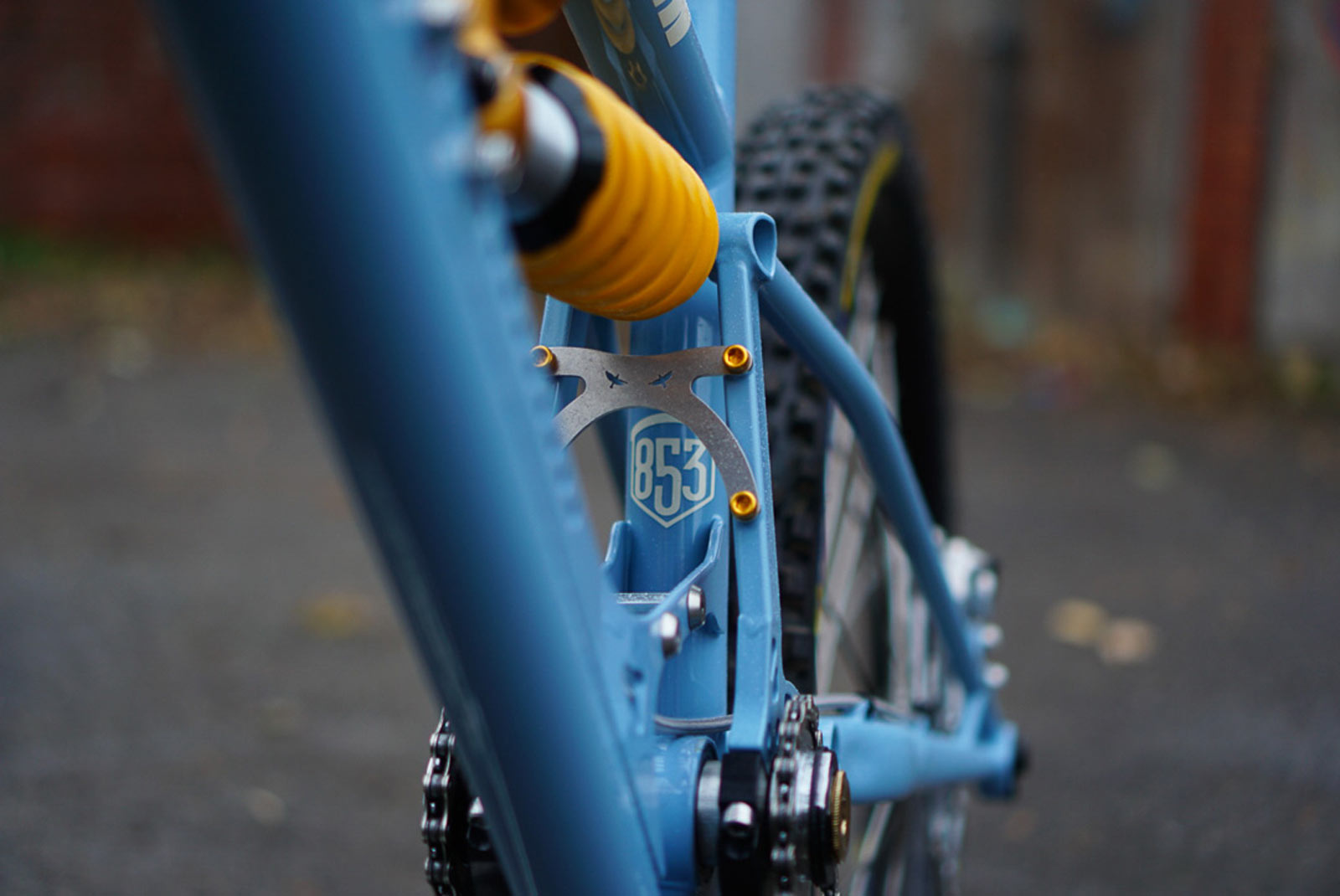 Joe says a second benefit of the Jack Shaft design is that the main pivot bearings are constantly moving, so don’t become “notchy”

Key to the design is that the Jack Shaft naturally places the chains concentric to the main pivot location, meaning the chain length remains the same, no matter where the rear wheel is at any point throughout its travel. So, chain growth is eliminated, but it does leave a slight issue in that the chain line is now offset from the main pivot. Joe says pedaling forces do therefore affect suspension a little, but running a small Jack Drive sprocket reduces this.

Joe says the Sturn has “suspension that feels absolutely sublime. It tracks super rough terrain, it absorbs impacts beautifully and it carries speed like nothing you’ve ever ridden”. 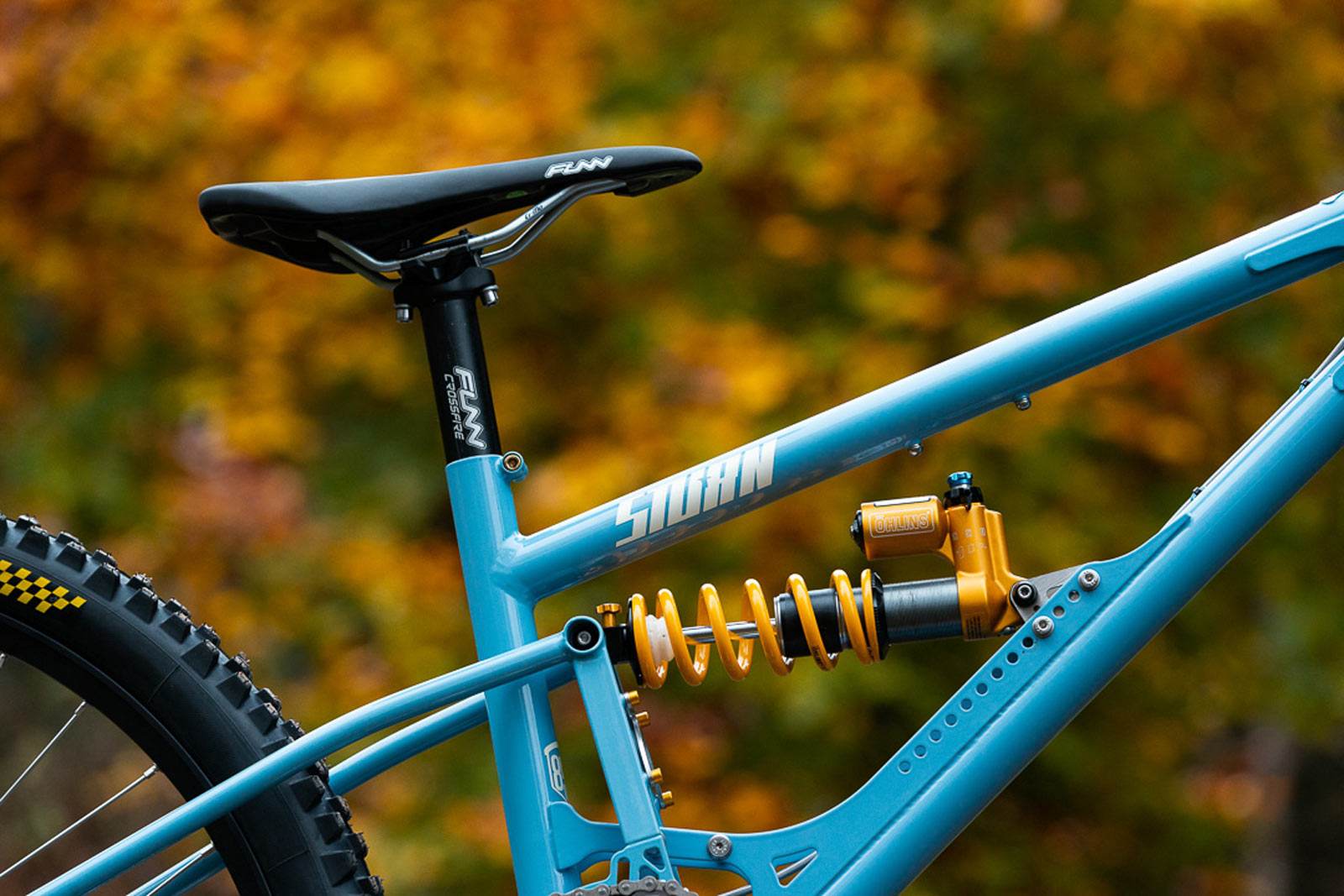 Well, there are no standard frame sizes for the Sturn, nor is there a standard wheel size configuration. All frames will be custom built to suit each individual customer’s needs. You can have it as a complete 29er, a complete 27.5″ or an MX. Joe has recommendations for chainstay length to ensure clearance for 2.8″ tires, as well as a 64° head angle and 76° seat tube angle, but measurements such as stack, reach, and seat tube length are up for debate. 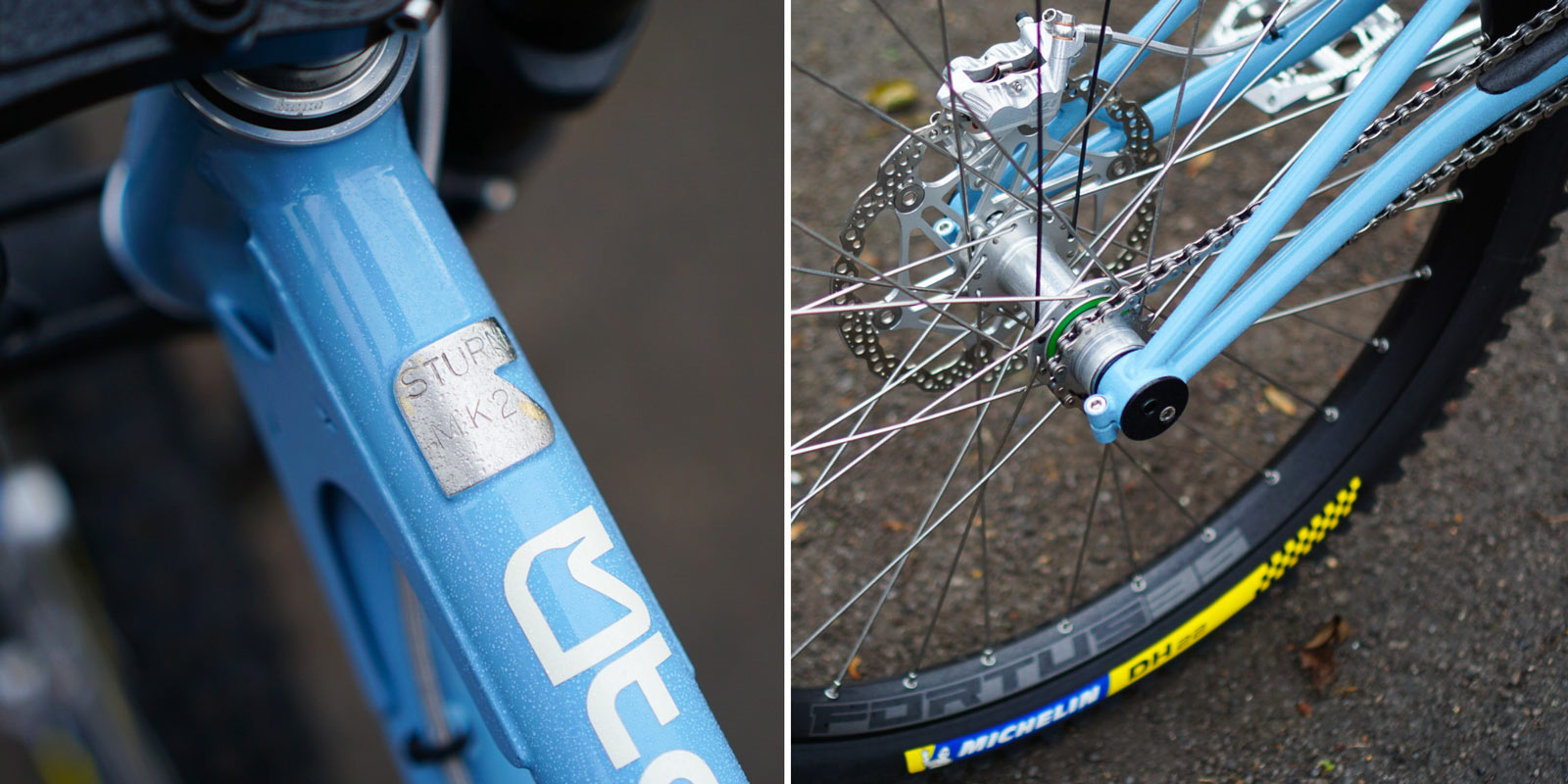 Unique Starling dropouts system means the rear wheel can be removed without adjusting tension; the boost-spacing swingarm has clearance for up to a 200mm rotor

The Starling Sturn V2 is available to pre-order now with a lead time of 24 weeks. The frame alone will set you back £2990 with shock pricing starting from £705. Starling will be offering complete bikes, with componentry available from Funn, Hope, Öhlins, RockShox and Middleburn.

A watershed improvement. No gears or derailleur on the rear hub is the future.
They could even pack in a multi-speed Rohloff-type transmission in the jackshaft.

Pete, the Zerode G1/2 did exactly that.

They already make that… it’s the Spur. Effigear gearbox up front.