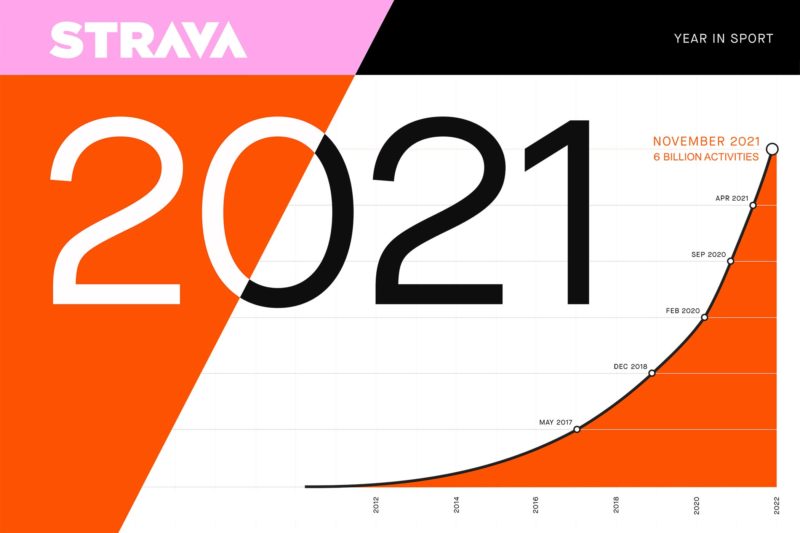 Strava’s latest 2021 Year in Sport review dives into the numbers behind another booming year for tracking & sharing our physical activity in the midst of ongoing shifts in global lifestyles. Whether it’s the unrelenting COVID-19 pandemic that still has many of us riding solo more often or in smaller groups, or extreme weather that’s pushed more athletes indoors for training, one thing is clear – adversity isn’t keeping people from staying active. At its most basic core stat, Strava reports a more than 63% boost in logged activities on their platform, almost twice the previous year’s increase – up to 1.8 billion uploads in the past twelve months from 95 million athletes. 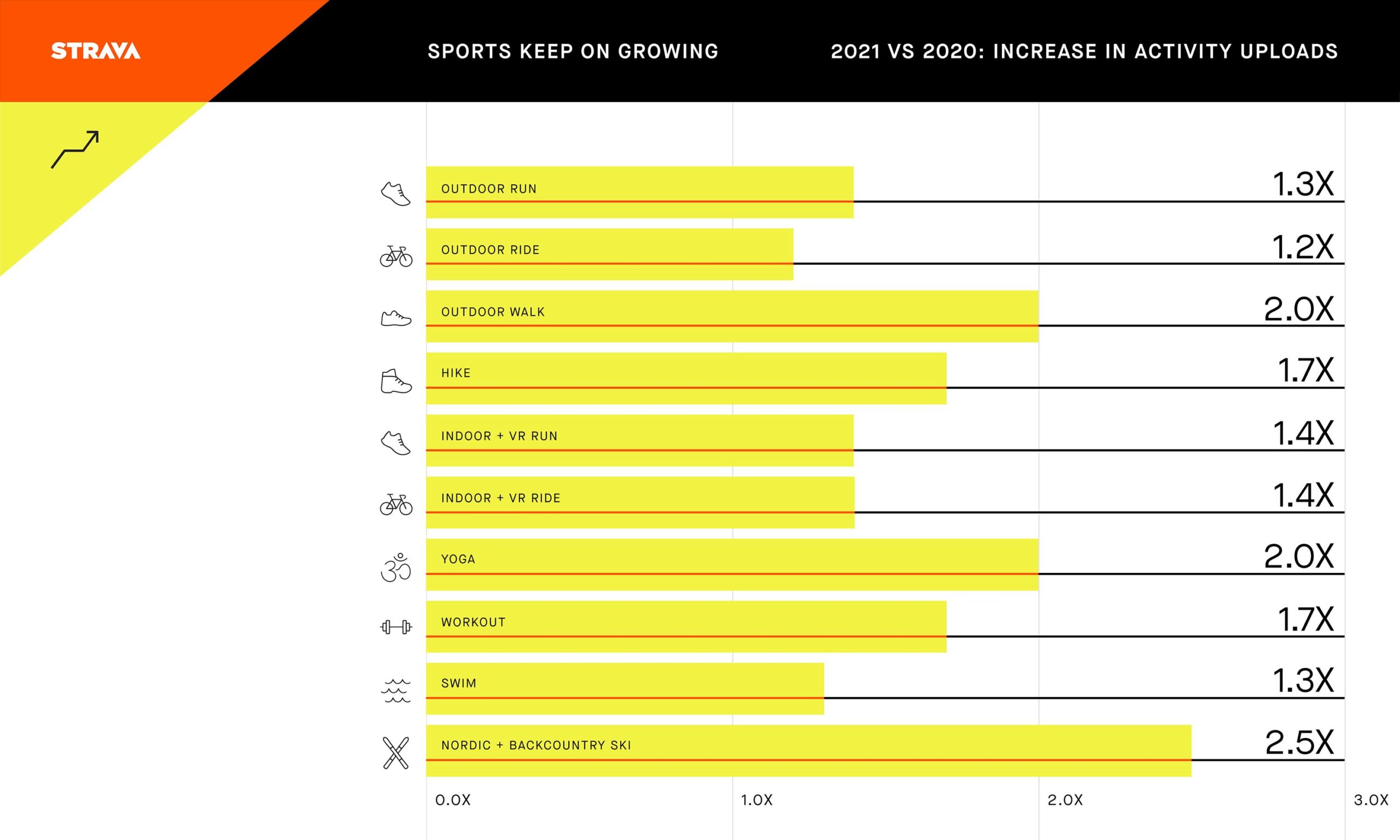 Strava has once again dug through our shared ride & run data in their 2021 Year in Sport to see how we are getting along. Last year they identified a shift in how many of us athletes stayed active during the global COVID-19 pandemic, and a huge exercise boom among women. Much of that boiled down to more indoor workouts during lockdowns, more solo socially-distant riding, and just how much we all relied on physical exercise to stay sane in a year of turmoil.

A year later and the pandemic isn’t gone by any means. But even as a number of in-person events & races returned in 2021, Strava data still shows us returning to personal activity and online community to keep us healthy and active – and we’ve now collectively racked up 6 billion activities since Strava began collecting data almost a dozen years ago.

The biggest highlight in the data is probably this year’s 63.6% activity increase to 1.8 billion uploads, almost twice as big a jump following 2020’s 33.8% surge to 1.1 billion uploads (up from 882 million in 2019) – fueled by Strava reportedly adding 2 million new users a month this year. 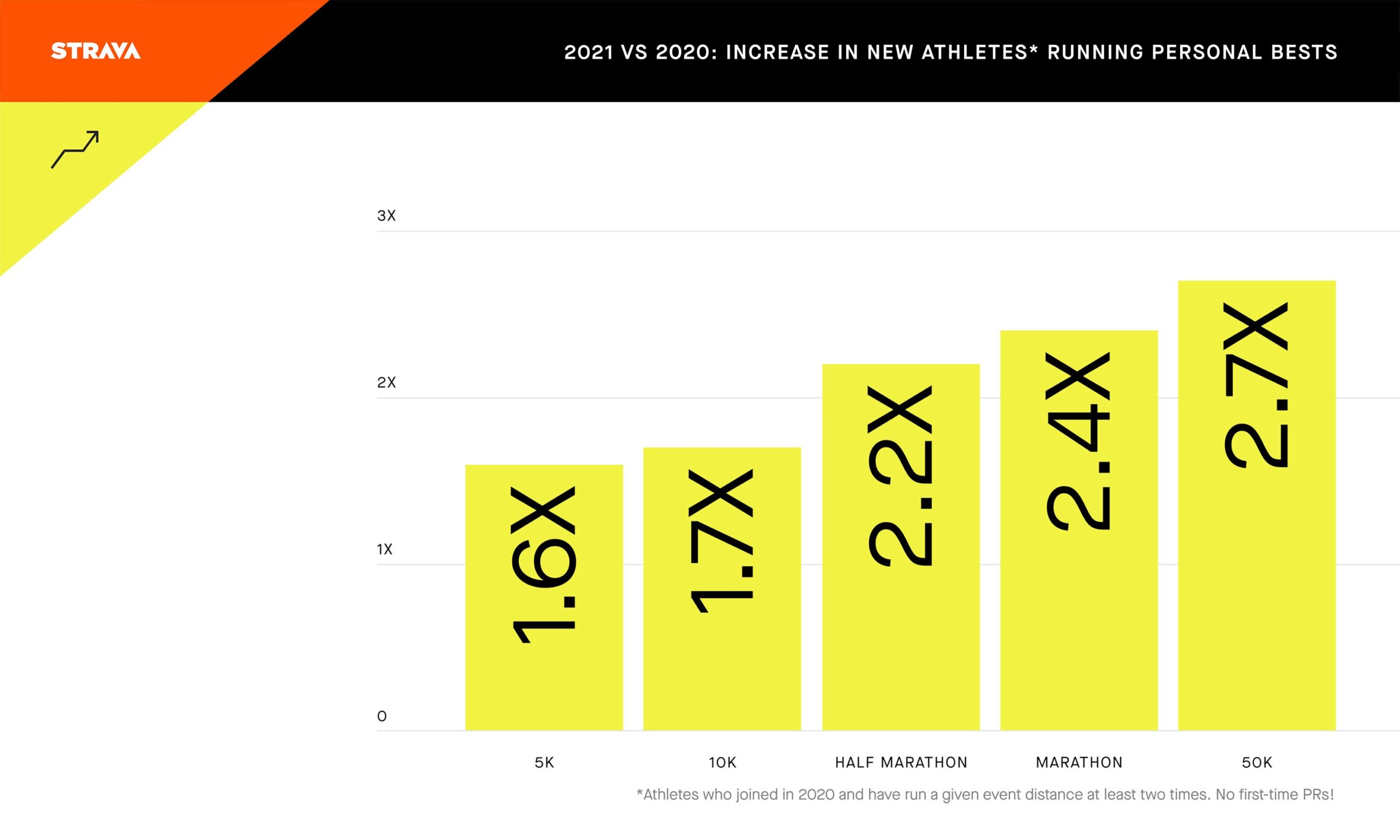 The ongoing Exercise Boom looks to have slowed a bit for the classic outdoor activities of cycling & running (up just 1.2x & 1.3x this year vs. 1.8x & 1.9x gains last year, respectively.) So the huge overall gains rely on at least two-fold increases in less conventional aerobic exercises like backcountry skiing, yoga, hiking, and simply walking outdoors, which saw many new athletes join in…

Strava singled out backcountry & nordic skiing increases where lifts aren’t required as many ski resorts saw closures or significant restrictions. Alpine skiing and snowboarding were down 37% compared to the season before.

Looking back to so many runners that joined in 2020, Strava found that those new to the platform were especially motivated. “Of runners who joined in 2020, 1.8x as many set a new PR this year than last” across a wide range of distances, with those running further more likely to beat their previous best times. 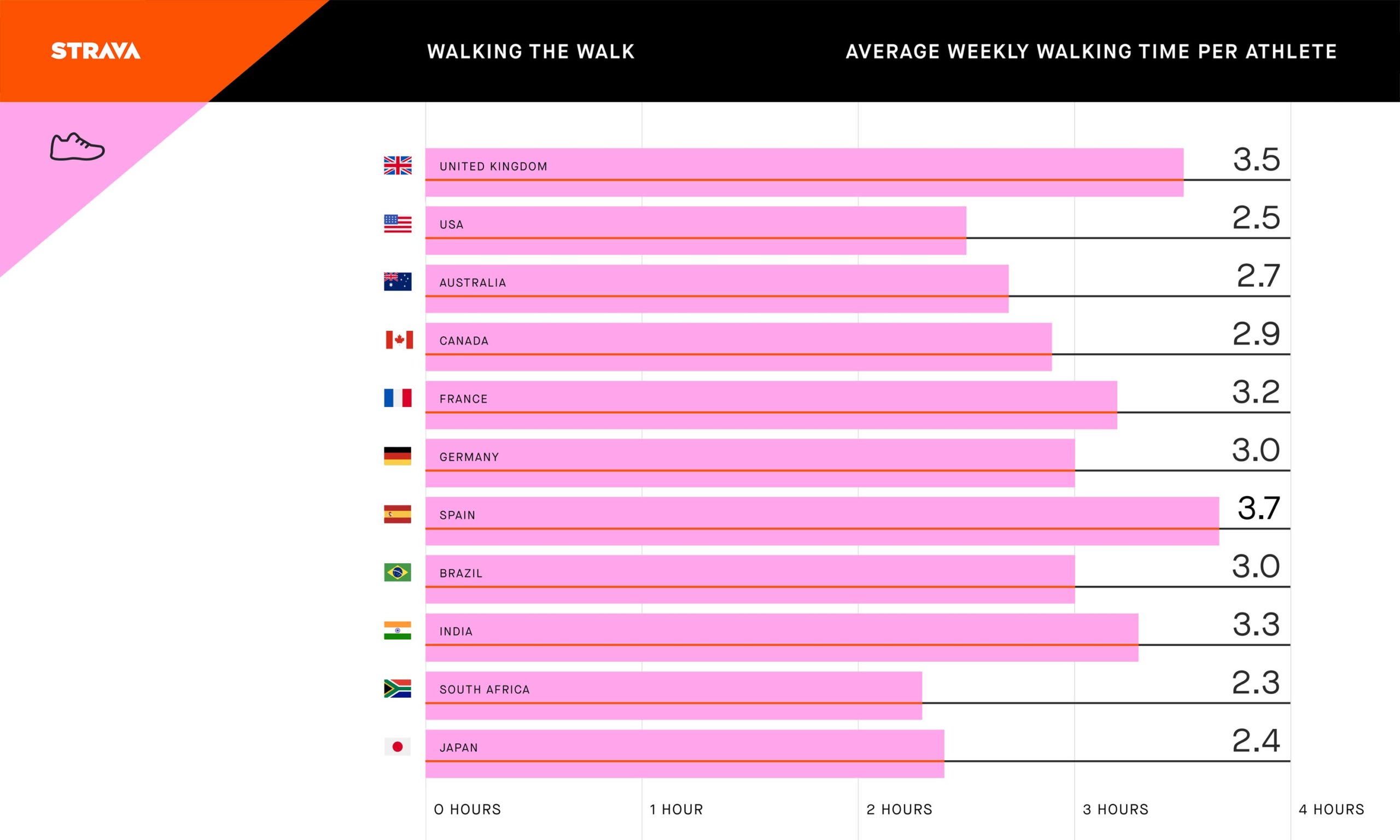 Some of the biggest activity increases came from simply getting out for a walk and some fresh air, and keeping track – becoming more popular across all age groups. Not to be discounted as just taking a lap around the block, Strava users who regularly upload walks routinely log 2-4 hours per week on foot. 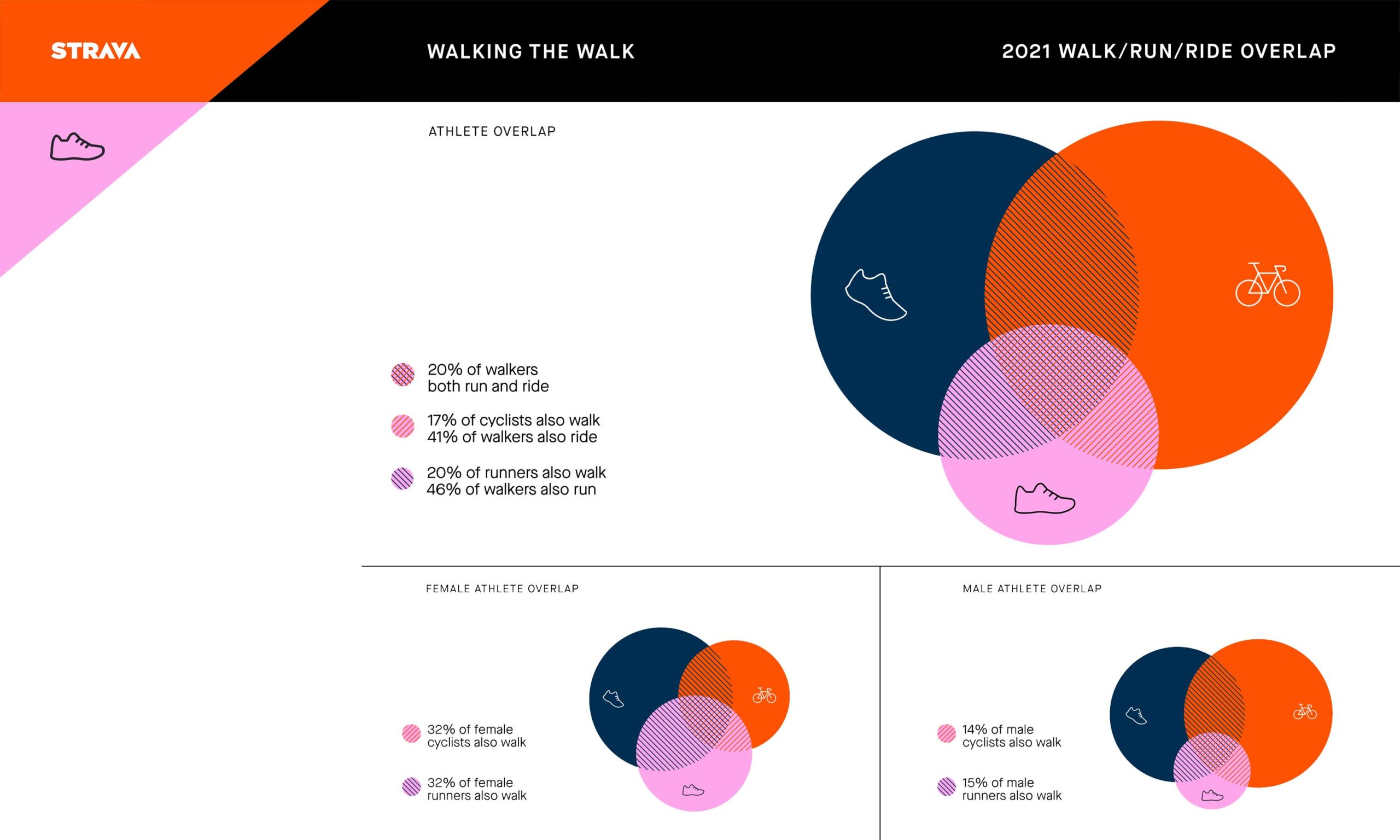 And a big portion of those out walking are also active cyclists or runners, with many doing both. More than 2/5 of walkers also ride bikes, while less than 1/5 of cyclists track their walks as well.

An interesting note in the data, female runners and cyclists 2.4x as likely to upload walks as males. And Strava’s deeper analysis across disciplines indicates that “cyclists and runners who walk are 16.1% more likely to still be active six months down the road than those who don’t“. Sounds like more of us should start keeping an eye on logging more steps, as well. 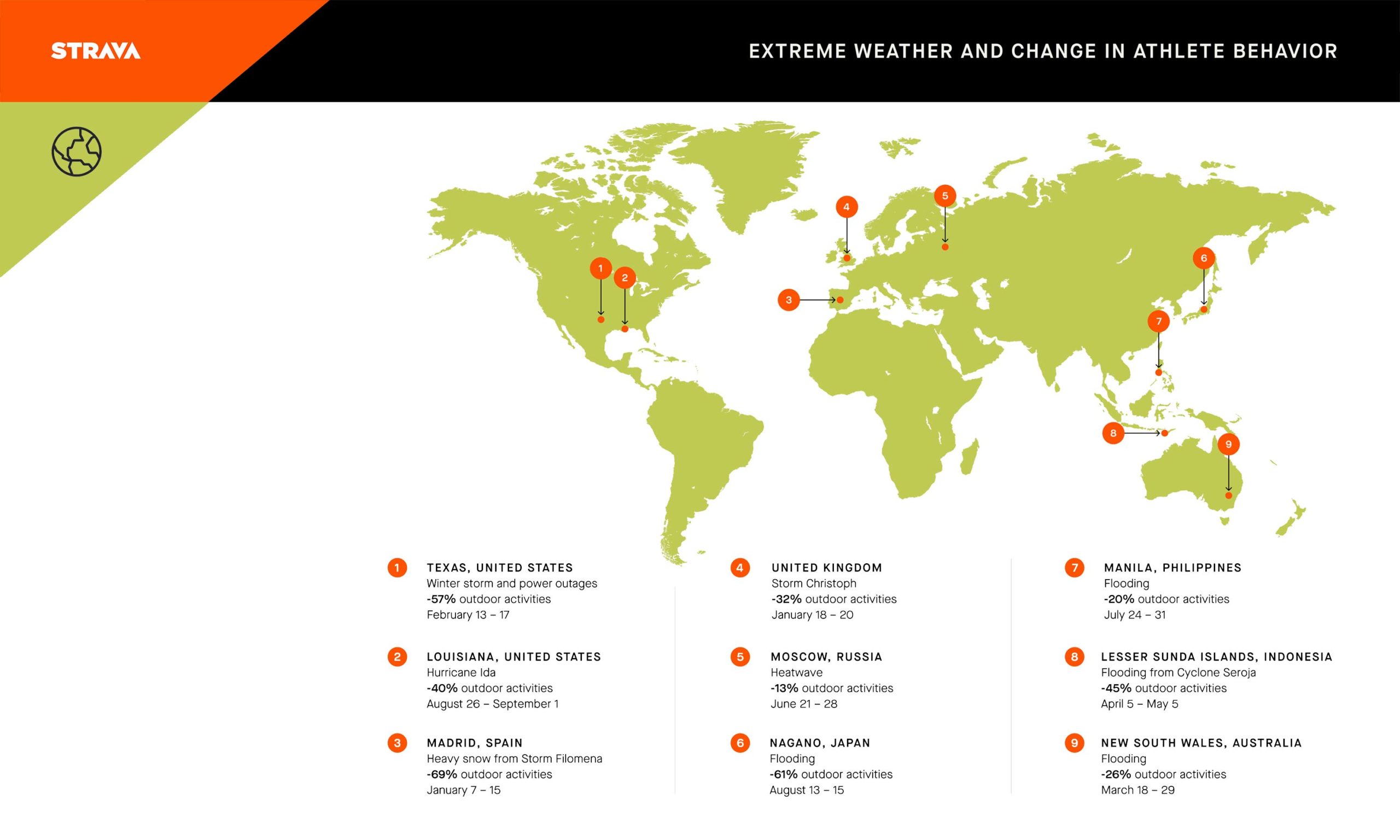 As if staying healthy and active in a pandemic wasn’t tough enough, Strava correlated their trove of athlete activity data this year with several major global extreme weather events. Unsurprisingly, climate change-induced extreme conditions kept many athletes indoors – whether due to heat, cold, stormy conditions, or dangerous air quality as a result of wildfires.

Kudos to everyone riding in 2021 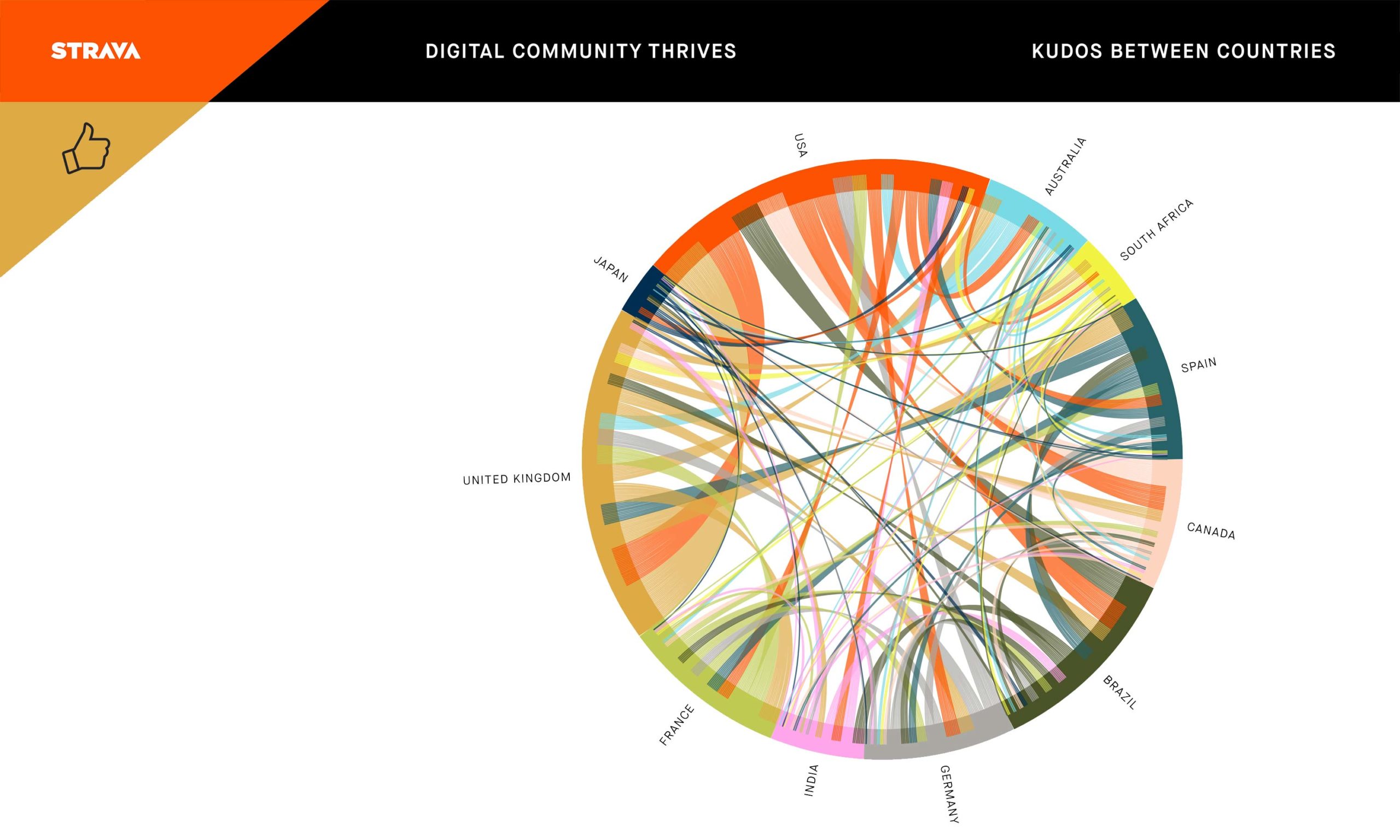 Not being able to always ride together, users shared more pictures of their activities… the number of activities with photos grew by 58%. Joining online Challenges has again seen twice as much participation (after two to three-fold increases in 2020), as the virtual competitions have continued to replace meat-space racing and even many real-world group rides, with online club membership growing by 37% too.

And when you can’t ride or run together, virtual kudos certainly help with a bit of friendly motivation. Strava’s analysis of Kudos Without Borders identifies the UK as the biggest giver of kudos to athletes in the USA, France, Spain, South Africa & Australia, while the USA is the biggest contributor of kudos to those in the UK, Canada & Brazil.

“Even as the global athletic community endured another year of pandemic disruptions and restrictions, we saw a persistent desire from athletes to stay connected and keep one another active. Athletes from every country on earth recorded and shared their runs, bike rides, and lunchtime walks. And in turn, the community encouraged one another by doling out 9.6 billion kudos,” says Michael Horvath, Strava CEO. “Every effort counts on Strava, and our team is thrilled to provide a platform for anyone who sweats to connect with their peers, find new places to be active, set goals for themselves, create clubs, and challenge their friends.” 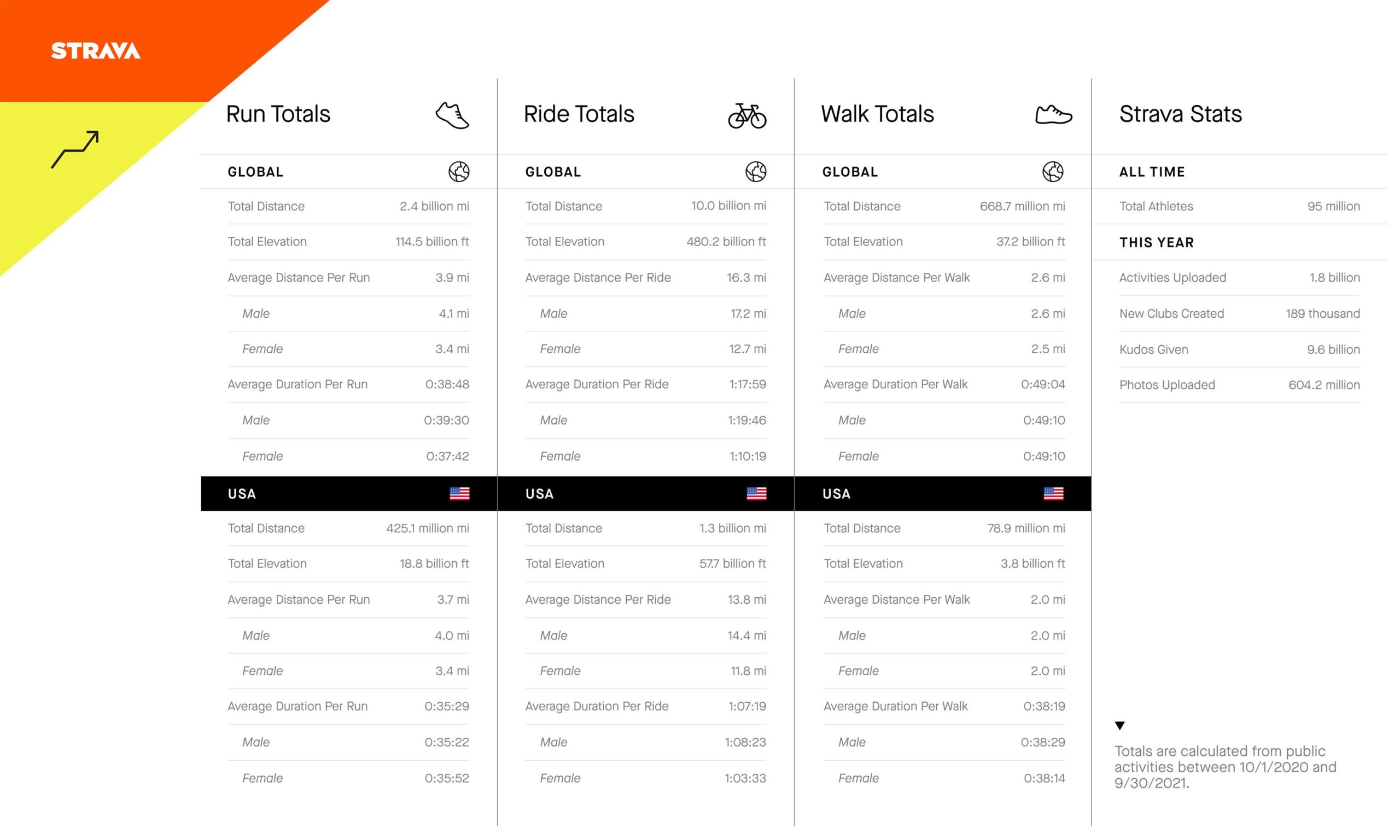 In the end, cyclists around the globe racked up 10 billion miles with 480 billion feet of elevation gain, up more than 20% year-on-year. Add another 2.4 billion miles for runners, up 26%.

Riders in the United States pedaled 1.3 billion of those total miles, making a slightly more modest 8.3% increase over 2020 – plus 9.8% more distance running, up to 425 million miles on foot.

That truly isn’t surprising. Because extreme weather has been keeping athletes inside their homes EVERY YEAR of my 54 years of life.