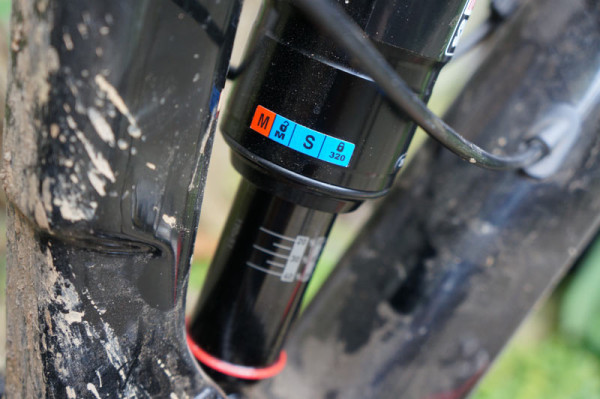 Many shocks have tune markers on the outside to show how the frame manufacturer spec’d them. It’s Greek to most of us, but suspension tuners will use that info as a starting point.

Like a song stuck in your head, the internal damping tune of your suspension is what makes it sing. So far, we’ve covered everything you can do yourself: Setting Sag (Part 1), dialing your compression (Part 2) and rebound (Part 3) damping, and adjusting air volume (Part 4). For the vast majority of riders, these user-friendly adjustments are going to get your mountain bike tackling the terrain like a champ.

But, as with anything made to work as well as possible across as broad a spectrum as possible, there’s always a chance it’s not going to work right for you. And if none of the other tricks worked, you could look at a new suspension fork or shock that has more adjustability built in. Or you could just order a new shock with a softer or firmer tune directly from Fox, Rockshox, Manitou, DT Swiss, Magura or whomever. That might be an easier solution then sending it off for custom tuning, but it would be missing the point.

“For a custom tune, we consider rider weight, riding style and, for rear shocks, the leverage ratio curve,” says Kevin Booth, founder of Suspension Experts. “The manufacturers don’t always have all of this information available to them, so it’s not possible to offer the perfect fork or shock out of the box. So while stock suspension comes out of a factory designed around an “average” sized rider, it has to be able to function for a rider that is anywhere from 100 lbs. to 300 lbs. It’s easy to see the opportunity to make it work better. To accommodate this broad range of potential riders, the external knobs tend to offer very coarse adjustments …swinging wildly from one extreme end of the adjustment range to the other. A suspension tuner’s job is to narrow that range of adjustment to work well for a particular bike (leverage ratio curve) and rider (weight).”

That means even a different stock tune is still going to be made to fit a very wide range of riders rather than you, specifically. So, how do you know when it’s time to look at a custom tune?

First things first, what are we talking about when referring to a suspension component’s “tune” as opposed to the spring curve?

“The difference between spring rate and compression tune is fairly simple, but so often misunderstood. Spring rate is not dependent on shaft velocity. That is, the spring force at any given displacement does not matter how slowly or quickly the shock is cycled. F=k(x)x. That is, Spring Force = spring rate (which in the case of air springs is a function of displacement) x displacement. Note, no dependence on shaft speed.

“The compression damping (in dampers that do not have position sensitive damping, like Double Barrel shocks) is independent of displacement. That is, if the shaft is being compressed at 30in/s, a certain damping force is achieved, regardless of where the shock is in stroke (Of course, shocks with Boost Valves, SPC, and other position sensitive dampers vary from this rule). F=c(v)v. That is, Damper Force = damping rate (which is always at least a weak function of velocity, sometimes highly variable) x shaft speed. Note, it does not depend on position.

“I’ve found it easiest to think of it this way: First, assume sag is set properly, nothing works if that isn’t roughly right. If the shock/fork is using too much travel (bottoming) very often, the spring rate is off. Examples of this: bouncing in the parking lot, on jump faces, and in long berms when there bike settles in (not “chop berms”). These are (typically) “slow speed” events, so the HSC is not relevant. When a shock behaves like this, it needs more spring progressivity (for an air spring) or a higher rate (for a coil). If the shock bottoms harshly in very rare but hard hits, then the HSC is the likely culprit.”

When it comes to what that typically means for you, Rockshox’s Duncan Riffle sums it up nicely: “Spring rate is for the person, tune is for the bike manufacturer.”

Indeed, the compression tune is dictated by how the oil flows through the compression damping circuit. That circuit can be made up of timing ports, needles and/or shim stacks. The size of the holes and ports and the strength and stack design of the shims controls how quickly oil can flow through them. The holes are typically what control low speed damping, letting oil flow through holes and ports. Smaller holes constrict the flow more and vice versa. The shim stacks are typically designed to flex under a certain amount of pressure, which lets them flex when a higher speed oil flow pushes them open and, thus, controls high speed damping. The suspension manufacturer or tuner can change these to get the tune just right. Rarely are these adjustments able to be performed by the end user.

We trust that the bike and suspension brands got it right, but here’s how you can tell:

“Once you’ve set your sag for your spring rate,” continues Riffle, “then it’s all about your compression tune. For instance, assuming you have the right spring rate, then you look at how quickly and easily (or rarely and difficultly) you’re able to blow through your travel. If things aren’t as supple as you want it to be even in the wide open setting and at the top of the travel, then you need a less firm compression tune.

“But if it’s too soft, and even in your Pedal/Trail setting the fork or shock is wallowing into its travel and bottoming out frequently, then you want to firm up your compression tune.” 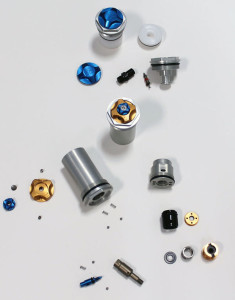 Booth concurs: “Assuming the spring curve (rate) is now correct; it’s time to start thinking about ride quality. Proper suspension setup allows a rider to focus on what’s ahead instead of what’s underneath their wheels. Does the bike remain composed in that rocky section? Does it recover well after landing a jump?

“Forces delivered to a damper change according to how far the spring medium is compressed. This is the argument for separate high and low-speed adjustments for both the compression and rebound circuits. Any modern sophisticated suspension will have these separate circuits but more often than not, what you are adjusting externally with your control knobs is the low-speed portion of a given damping circuit, with high-speed forces being controlled internally with shim stacks or poppet valves (there are plenty of exceptions).”

Booth started us off explaining how most suspension components are made to fit a wide range of riders and bikes. Darren Murphy, founder of PUSH Industries, adds:

“So, suspension tuning is tool to meet the end user’s expectations. You can certainly have two different riders purchase the same bike but have different experiences. This is where the role of the suspension tuner really comes in. Product managers from the suspension company and the bike company have to sit down across from each other and decide what is the best overall fit for a shock absorber specification that will be best for the largest variety of riders. As a suspension tuner, we get to work with the end user to find out the things that the rider does and does not like about their bike and make adjustments and modifications to meet that need.”

Should you do it?

Opting to have your suspension professionally tuned isn’t something to be taken lightly. Prices for rebuilds and mild tuning start at about $150 for modern forks and shocks and go up from there, sometimes pushing close to $400 or more. Plus shipping each way. Not to mention the downtime. You should consider whether your current bike and equipment is worth the investment, or if an upgrade to a better (not just different, but better) part or even bike might be more worthwhile. But, if you’re happy with your setup and just want to eke more performance out of it, or if you’re at the extremes of rider weights, then a custom tune could be just the ticket.

Even if you’re not planning on getting your stock suspension tuned, the information here is worth keeping in mind if you’re replacing a worn out or broken piece. Call the suspension manufacturer and discuss what those letters and numbers mean and see what your options are. Most major brands can build the shock to spec for the bike it’s going on, which means they can build to your spec using various off the shelf parts. That doesn’t mean they’ll dial it down at the same level as Suspension Experts or PUSH, but they may be able to get you closer.

In my experience, purchasing rear shocks from an ecommerce site was only once an “upgrade”. All others were downgrades. The reason is that the stock shock is a tune that matches the bike’s various leverage rates through travel. An off-the-shelf shock usually does not match and is like playing shock roulette.

A custom tune of your existing shock or a custom build of a new shock is the way to go. And as a bonus, the custom tune will fit your weight, terrain and riding style.

The only exception I can think of is a Cane Creek Double Barrel.

Darren @ PUSH put it best, OEM shock tunes are for an average size and ability rider, the rest of us need to consider a custom tune. A custom tuned shock is a better deal than a new shock gamble as Mr. P has said, as ‘another shock’ is not ‘my shock’. Over and over I have heard from riders I know that show up with a ‘new shock’ only to have it suck, maybe worse. The Cane Creek is the only new shock that can work for possibly all as the range of adjustments is so wide, but it will take some time and patience to dial it in. I don’t have that kinda twiddling gene, set it and forget it! Off to Hippie Tech I go