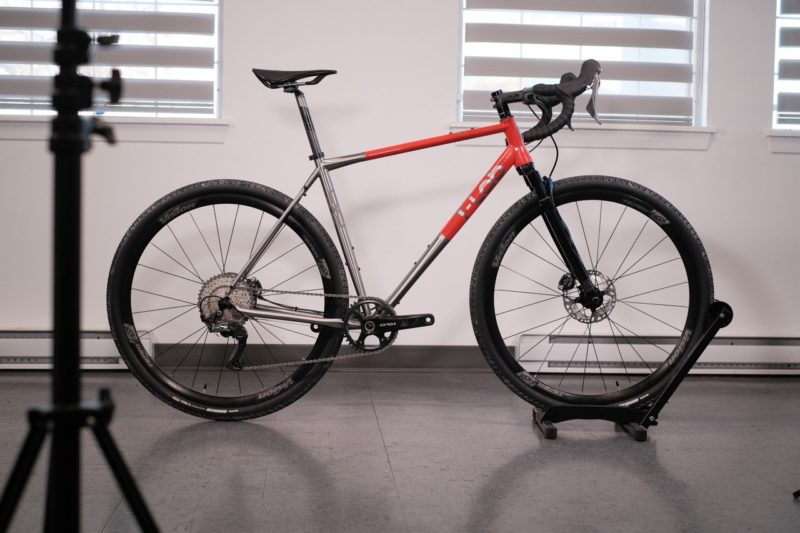 In terms of new gravel bikes, it seems the Philly Bike Expo was a good place to be. We’ve known about a new project from T-Lab Bikes out of Montreal for a while, but it was out at PBE that the X3-S finally saw the light of day. 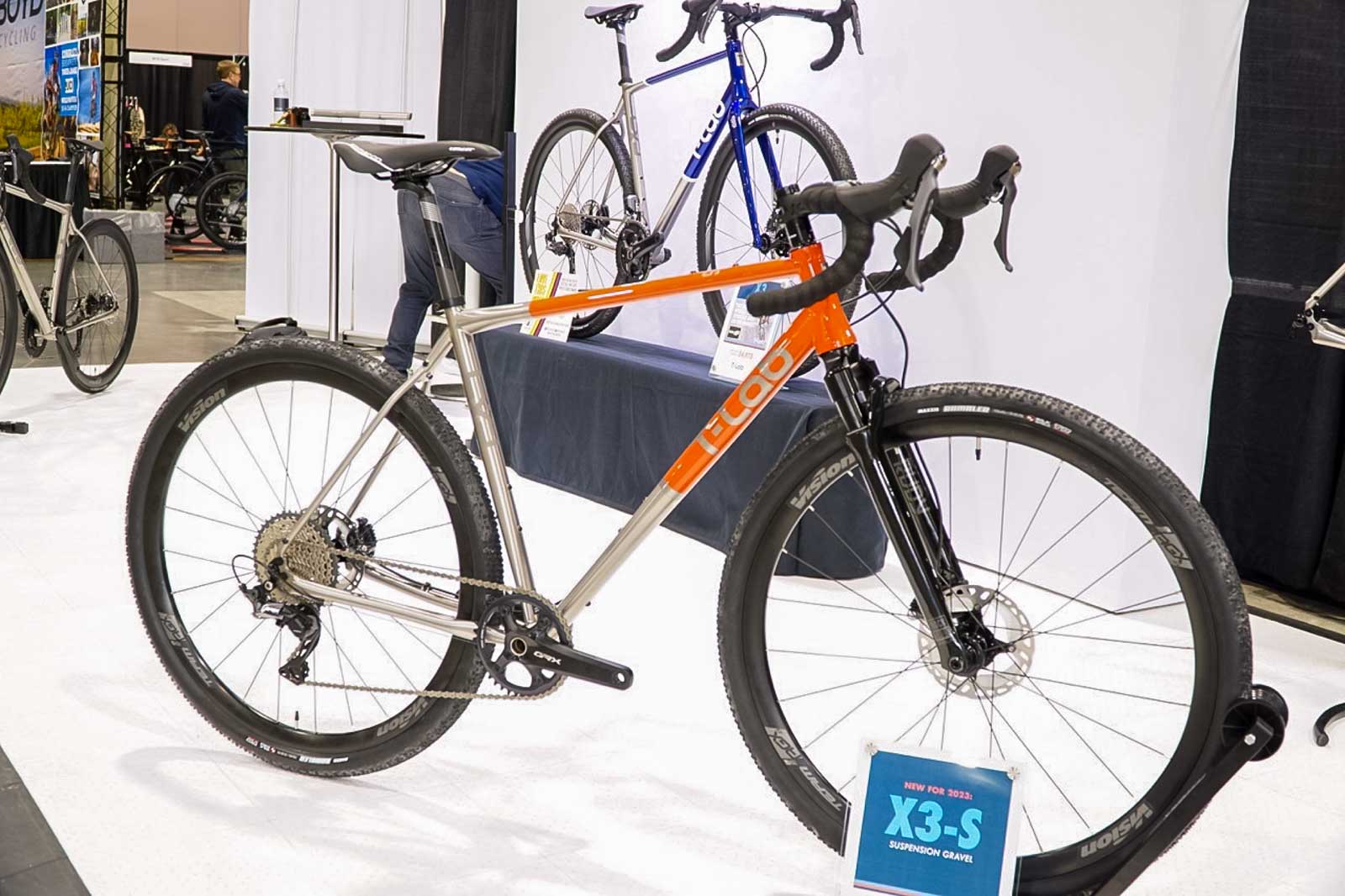 T-Lab bikes introduced their X3 flagship gravel bike back in 2018, and it’s still one of Gravel Cyclist’s favorites. However, T-Lab Co-Founder Rob Rossi states that since then, “our more adventurous clients have been asking for a suspension gravel bike. So our design team got to work.”

The result is the X3-S, where the ‘S’ stands for Suspension. Unlike some current suspension gravel bikes on the market though, this isn’t just the X3 with a suspension fork swapped in. The entire front end of the bike has been redesigned to offer the correct geometry and frame performance that goes along with having a suspension bike up front. 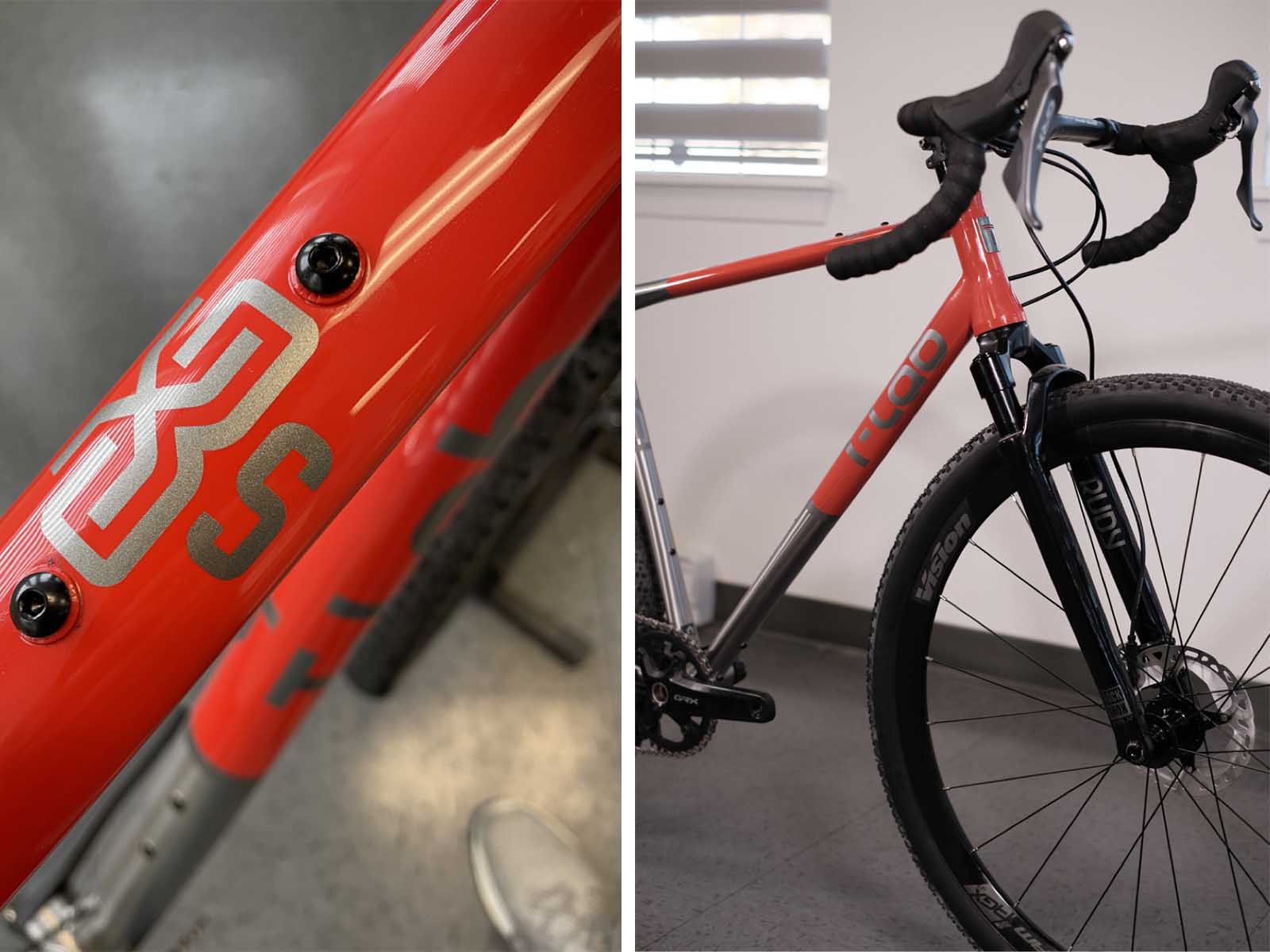 Up front, you’ll find that the X3-S is built around a 40mm travel Rockshox Rudy Ultimate XPLR fork with a 45mm rake. In spite of the fact that RockShox offers both 30mm and 40mm travel versions of this fork, until now, we’ve mostly seen 30mm versions as original spec – that’s because a 30mm travel version will upset the geometry less on a frame that isn’t suspension corrected.

Here, the X3-S is suspension corrected, and intended for the longest travel Rudy at 40mm. Though T-Lab states that it can safely run forks from 30-60mm of travel. 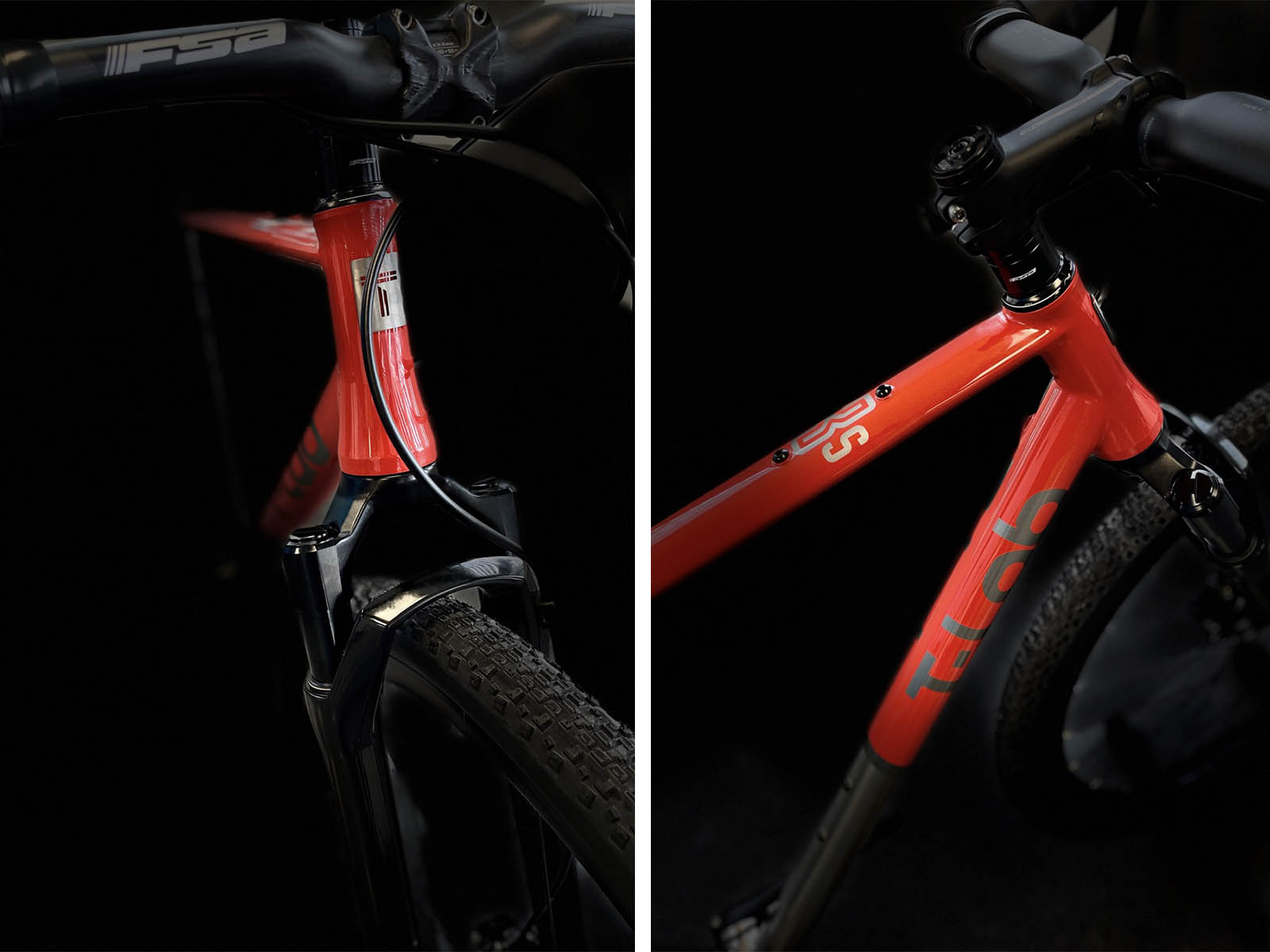 Just as important is the stiffness of the front end. With a suspension fork at your disposal, you’re almost guaranteed to push things harder on rougher terrain. That means the X3-S would benefit from a stronger, stiffer front triangle, which T-Lab delivered. Since the suspension fork will make up for a bit less compliance out of the frame, the increased stiffness should keep things tracking in the right direction when things get rowdy.

The geometry of the X3-S is also tweaked for more aggressive riding with a longer reach than the X3 meant for shorter stems (60-80mm). You’ll also find a slacker 69º head tube angle, all to provide stability at high speeds on rough terrain, and making the front of the bike easier to load while cornering. 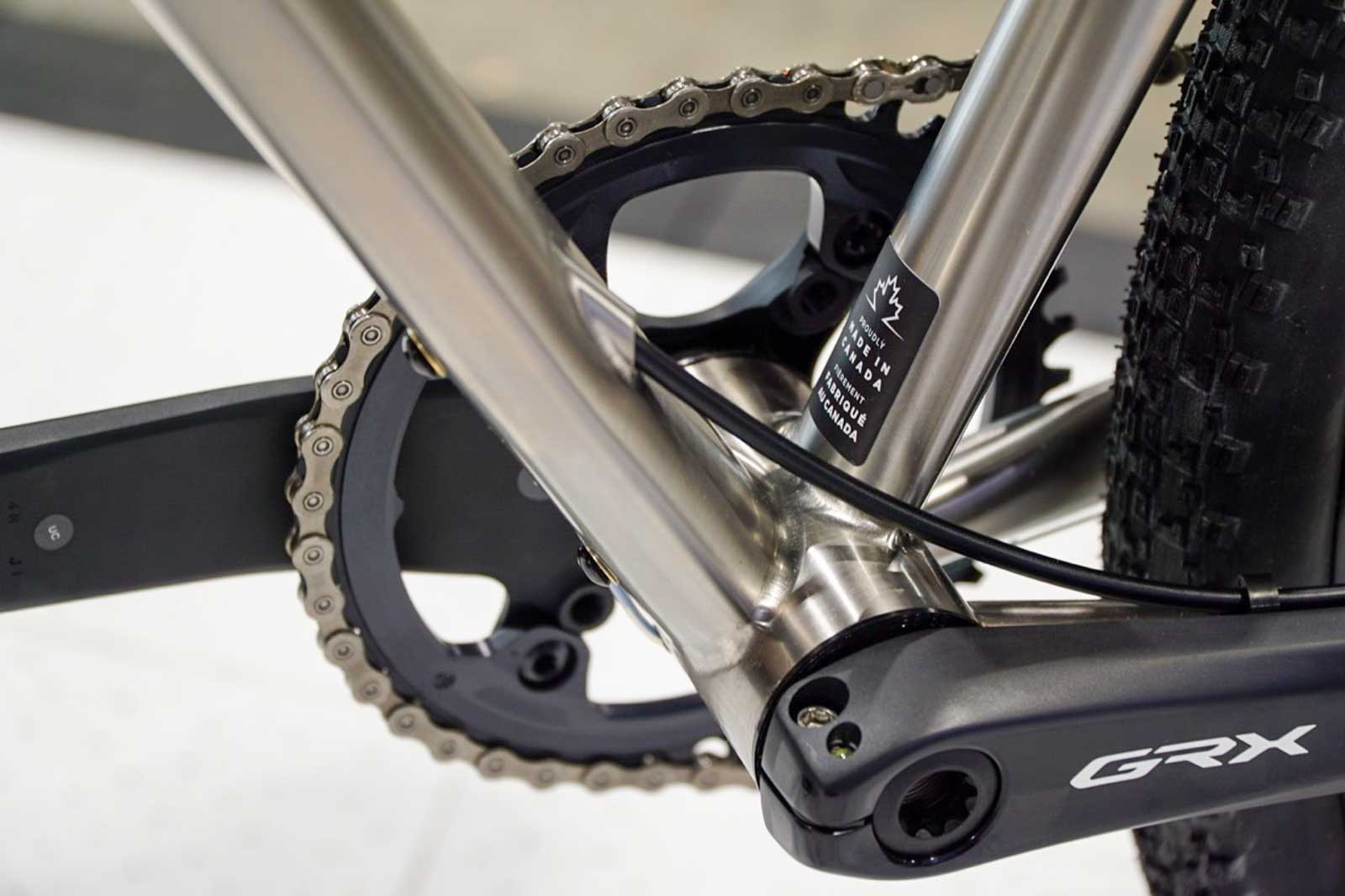 Like the X3, the X3-S is recommended to be built with a BB-386 bottom bracket shell. T-Lab says this allows for optimal lateral stiffness and their precise machining eliminates the possibility of any creaking. If you really have to have a threaded BB and are willing to sacrifice some stiffness (and some dollars), a threaded BSA bottom bracket is available as an option. Also like other T-Lab bikes, the X3-S will be available as a mostly stock build – or all the way to fully custom, including the geometry and the paint.

The X3-S is available as a 1x build only, and offers tire clearance up to 700c x 50mm which matches that of the Rudy suspension fork. Made in Montreal, Quebec, the first small batch of X3-S frames and complete builds will be available starting January 2023.

We will also have a detailed first look at this bike coming soon as we’re anxiously awaiting the arrival of a review model!

I always love to see bento box braze-ons on top tubes. Because, you know, during every ride I get like this incredible hankering for sushi and sashimi.

Their frames and tube shaping are really eye catching and appear to add functionality too. I’m aware that Jom the “Gravel Cyclist” speaks very highly of the T-lab X3.22 models. I love the top tube shaping and the head tube tapered machining, all looks wonderful until I get to those dropouts. Those are some of the ugliest dropouts in memory. I know the theory behind them is to keep them relevant in the future of drive trains changing. I’d certainly enjoy spending time riding one of X3.22 but man oh man those dropouts are an eye sore.

Super nice bikes. Saw them in person at the expo.

If you’re going to put a suspension on a bike, they might as well go with four inches (100mm) of travel or it isn’t even worth the effort and extra weight.