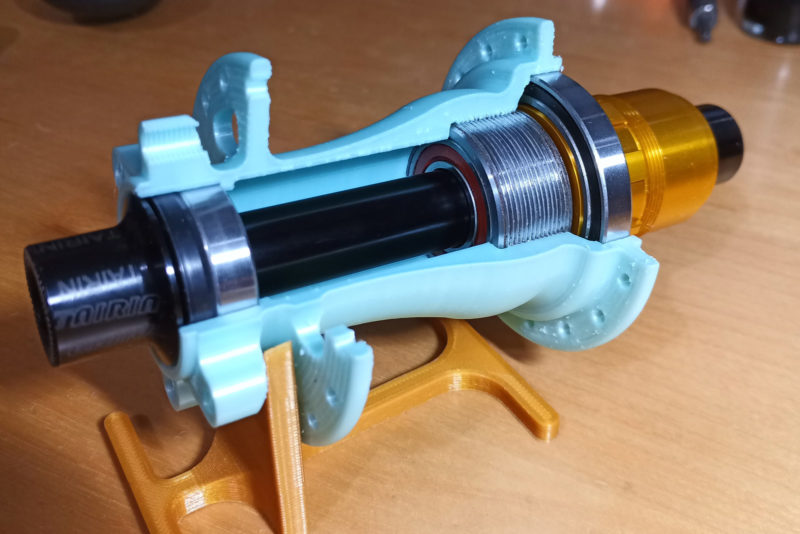 Almost two years have passed since we first heard about the Tairin Mugen silent roller clutch drive hub. The BC based wheel company binned the project in 2020 right before release, as their long-term field tests highlighted some deficiencies that could affect the life of the clutch. The hub was very heavy, and the revisions required to improve longevity would add even more weight. Back to the drawing board they went. Again, the team set out to design a novel mechanism that was simple, easy to service, extremely durable, silent, and one that also addressed pedal kickback that is a feature of most full suspension mountain bike designs. Now, they tell us they’ve done just that, and are preparing to release the new Tairin Silent Star Ratchet Hub in early summer 2022.

The new hub is in fact, modular, with interchangeable parts that allow you to tune the noise generated by the hub, or eliminate it completely. You can run it in Golden Mode which features the silent face gear drive, or Silver Mode, which features a magnetic face gear ratcheting drive with two modes: a quiet ratcheting mode and a loud ratcheting mode. All mechanisms are interchangeable without the use of tools, though the Golden Mode will retail at a higher price than the Silver Modes, which are meant to be more wallet-friendly. Here’s what we know so far about the new Tairin hub.

So, how does this Golden Mode silent star ratcheting mechanism work?

First, a quick overview of how a more familiar star ratchet mechanism works, as seen on DT SWISS hubs. During freewheeling, the star ratchets need to ratchet on every tooth for every ratchet (or every POE). This is what gives rise to the buzzing noise you hear while freewheeling. The noise stops when you start pedaling (at a minimum RPM such that the freehub speed matches the RPM of the wheel), as the spring-backed outboard ratchet engages with its complementary shape inboard counterpart to drive the rear wheel.

It is this mechanism for engagement that sets the new Tairin Silent Hub apart from this more commonly seen star ratchet mechanism employed by DT SWISS and others. On the Tairin hub, during freewheeling, one of the star ratchets (or face gears, as Tairin refer to them) is retracted away from the other. So, there’s no ratcheting, no noise, and also no unnecessary wear on either face gear.

When the rider starts pedaling the mechanism joins the face gears together, continually applying a force to keep them together (again, so long as the freehub speed matches the RPM of the wheel). It is this mechanism that was previously kept under wraps, but since the original publication of this article, Tairin has shared an insightful video on its Instagram account. 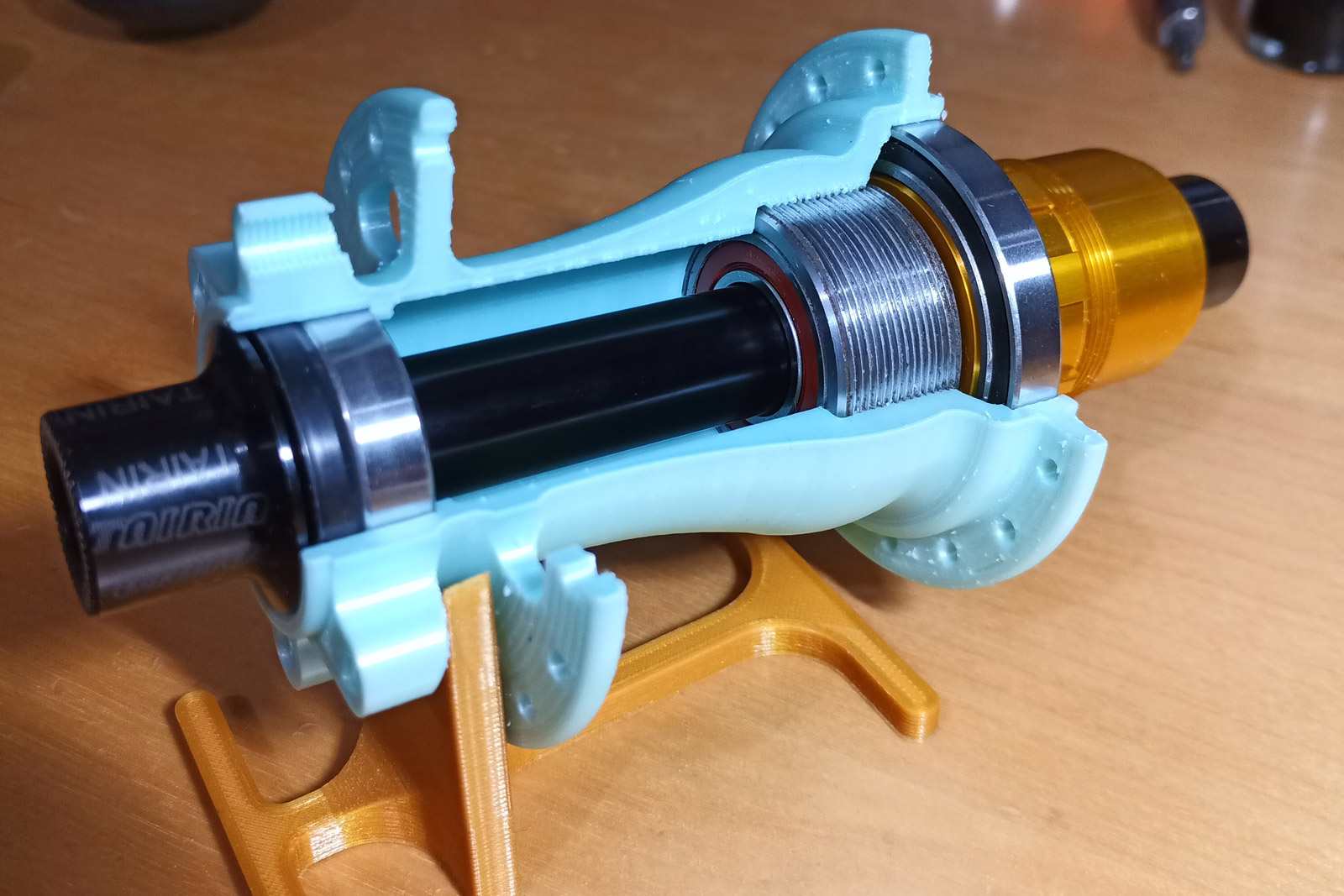 Tairin tell us that, not only does this novel mechanism give rise to a silent hub, it also improves the freehub’s torque transfer over the lifetime of the hub as the teeth aren’t subjected to wear during freewheeling.

Tairin also claim their new silent hub can reduce the pedal kickback experienced on some full suspension bikes. If you’re not sure what that is, you can check out Tyler’s short video explainer here. Basically, as a full suspension bike is pushed through its rear wheel travel, depending on how fast the rear wheel is spinning, and how fast the compression event is, the bike can suffer from chain growth. The cranks are forced to rotate rearward to deliver the additional chain required in that scenario, and it can be an unsettling feeling for the rider.

On any hub, of the star ratchet or pawl design, there is scope for pedal kickback. Really, it’s not something that happens to any noticeable degree in most riding scenarios, but it is true that a higher number of engagement points can result in more pedal feedback overall than a hub with fewer POEs. That’s because a higher number of engagement points means that fewer degrees of rotation are required at the cranks in order to engage the freehub. 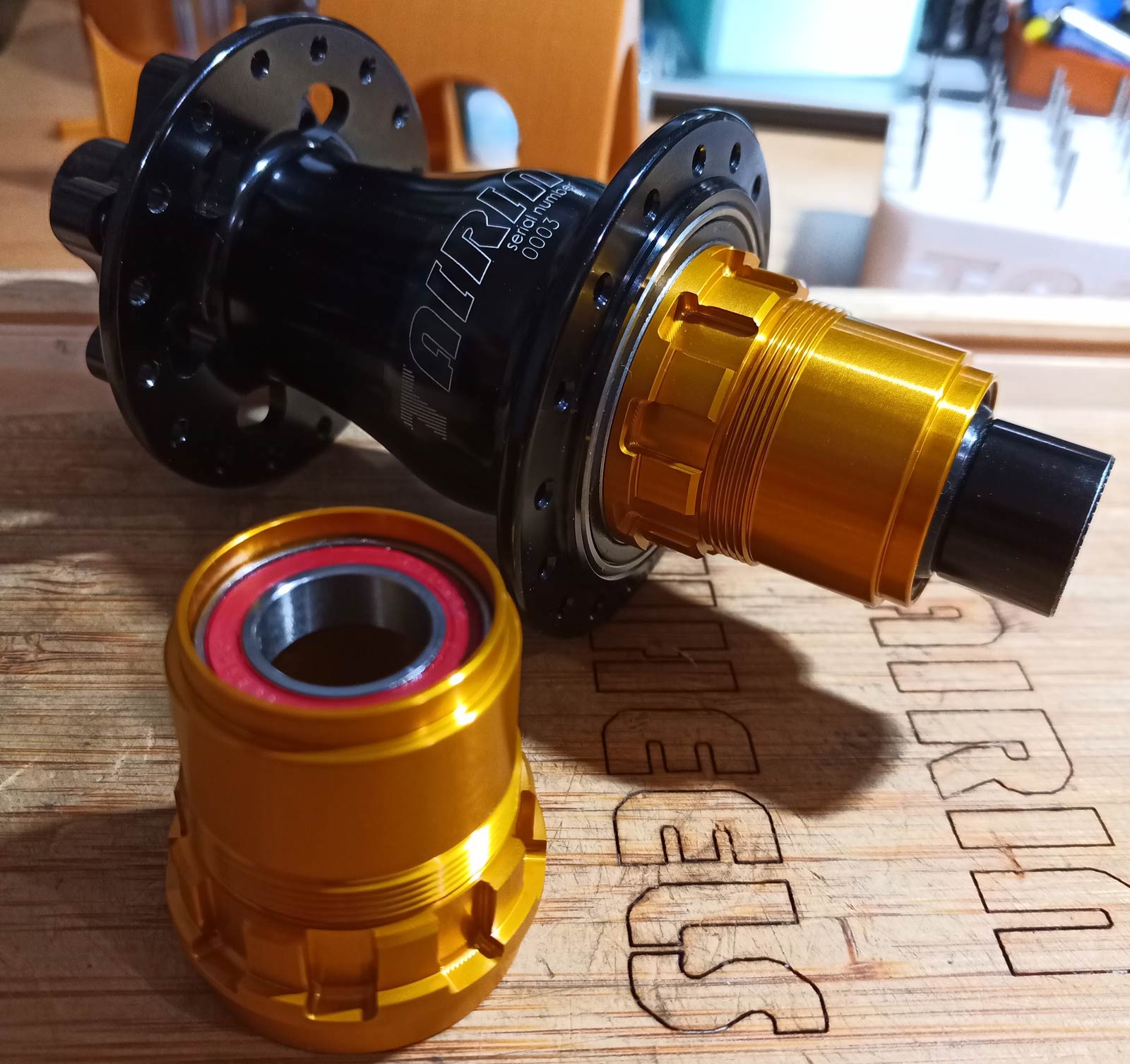 The Tairin hub does not eliminate pedal kickback, of course. The engagement is set to 7°, so some bikes will still exhibit it to some degree in certain riding scenarios. What the Tairin hub does do, is make it more consistent thanks to the Floating Engagement Index.

“This is unlike indexed standard ratcheting systems, where you are momentarily engaged right after every ratcheting click. A ratcheting 10 degree clutch freewheeling would go from engaged to 10 degrees from engagement in 36 cycles every revolution (36 Points Of Engagement). Our floating index start point is always at 0 degrees when freewheeling”.

Jose also revealed that the new hub will run a token-based pre-load system at the end caps.

The Silver Modes of the new Tairin hub are mechanistically different to the Silent Hub. It all runs of the same hub shell of course, but the Silver Modes lack the initiator mechanism seen on the Silent Hub that allows retraction of the outboard gear face during freewheeling.

In the Silver Mode, the face gears ratchet against one another as they do in traditional star ratchet hubs, resulting in a buzz noise. The noise is tuneable, however. In this system, in place of a spring, there is a magnet that pushes the face gears together for engagement. A strong magnet gives rise to a loud noise, while a weaker magnet makes for a quieter, but still plenty audible, freehub noise. These are said to be easily interchangeable without the need for tools.

The new Tairin Silent Hub and its more affordable (but noisy) Silver Mode magnetic ratcheting counterparts will be available with Shimano Microspline, Shimano HG and SRAM XD freehubs, in the following specs:

No word on pricing yet, but expect these to become available by early summer.

Interesting stuff, but it kinda solves a problem that doesn’t exist. I’ve never had my star ratchets wear out. And even if they do, they’re a cheap and easy replacement.

People will pay for silence. If the “gold” is reliable and lighter than Onyx, they’ll find buyers.

Such a hub has been the city of gold for hub designers for 30+ years. Prior search for it and sometimes think they found it but alas it fails.

Onyx has come the closest but “oh it’s too heavy”. Ok. So? Light doesn’t mean fast. Oh and crank the spoke tension on this flimsy featherweights and the bearings bind, which isn’t fast.

Agreed. Lighter isn’t always better. The easiest and cheapest way to reduce the weight of my ride is to stop drinking beer. I love the Onyx. It’s dead silent and provides instant engagement, is tough as nails and never give a lick of trouble.

Can confirm. Have two wheelsets w/ Onyx (one Classic, on Vesper), and once you’ve tried the silent and instant engagement, it’s very, very hard to go back to noisy freehubs (even the wonderful Hydra or 1-1 from I-9).

It’s like being in Stealth Mode; all you can hear are your tires on the dirt, and in my case, labored breathing…
; )

K-Pop is dangerous to your health
Reply to  eRIC

Another great Onyx trait is the way their axle interfaces with the bearings they have the least amount of flex under load across the board. Big part of the reason why they can also boast low drag. There was an independent University study on this with all the major aftermarket hub manufacturers. If you contact Onyx they’ll send you the link.

Only the 18T ratchet rings are inexpensive. The others are at least $100 a set. As to eventual wear? It must happen, although likely faster with the 36/54T versions.

Otherwise, I agree that this design solves nothing. The obsession with offering “loud” hubs? Totally pointless. If the design is a bit noisy and has little drag, then fine, but there’s no reason to pursue that as a “feature”. I love my Onyx hubs, but can understand why others may favor lower weight, even if it’s largely a psychological benefit. The reduced noise from my bike removes what would otherwise be a distraction from quiet riding.

uuhhh, the golden mode looks really interesting.Running load Hope and TrailMech hubs for the last 3 decades and will lace up some quiet competitors in my next set of wheels…

Soo it works like Shimano MTB hubs with microspline?
I know it’s not full Scylence, but my SLX hub is very silent!

This could be great if the durability is good. DT makes wonderful hubs and they aren’t really all that loud but I would love silence. I tried the Onyx and wanted to like it, but the flexy/spongy feeling really bothered me.

Have a look at what Enve and Mavic do with their shared ID360-style hubs. They feature a rubber damper behind one ratchet-ring. Take it out for noise levels similar to DT Swiss. Add it, and it’s much more silent and blunt.

This concept can – by matter of physics applied to this world – only work with a certain amount of friction between a rotating and non-rotating part, in order to take the ratchet-ring(s) further apart than normally the teeth by themselves would do.

So yes, silent. But with added friction while coasting. If they designed it cleverly, the amount of friction would not be greater than the ratchet-freewheel typically gives. In that case: great.

The biggest issue that Shimano had with a similar concept/working principle in their Scylence hubs, was that the friction-based element makes it that it’s not 100% fail safe. Friction is tough to keep really constant, and typically concepts like this will be very dependable on the amount of friction in the system.