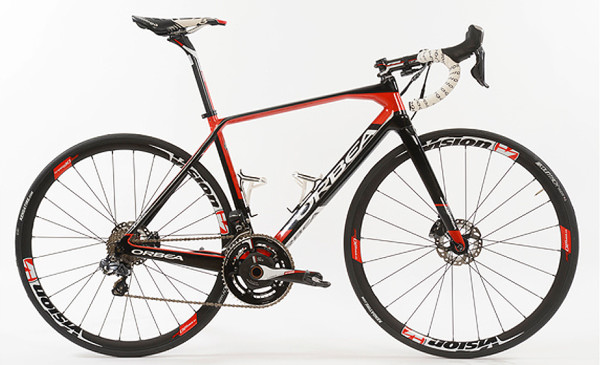 While the window between when the pros get the new stuff and the rest of us do narrows each year, they still get many of the best things early in the race season while we wait for summer release schedules to roll around.

Case in point, the team-exclusive Orbea Orca Disc, a new bike for Cofidis to race the classics upon. The Avant Disc came out in 2013, so it’s not the Spanish brand’s first disc road bike, but it is the first intended for the pro peloton. It’s decked out with components from team sponsors Shimano, Prologo and FSA, and we pulled a few screen grabs from their team’s promo video to show frame details …

UPDATE: Orbea’s response about the new bike below! 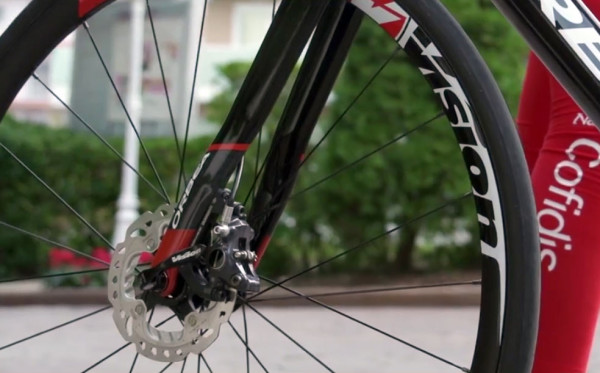 The frame and fork shapes are familiar, and they’ve gone with the flat-mount disc brake standard. Looks like 140mm rotors front and rear. 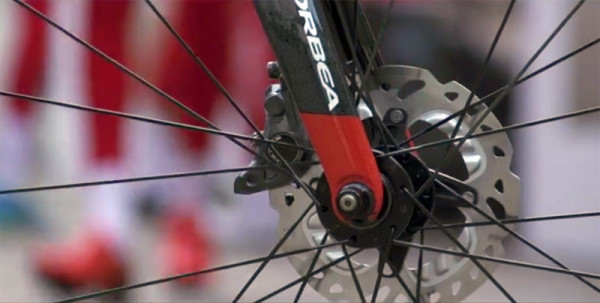 We’re a bit surprised to see quick release dropouts, but it is meant for pro racers, so perhaps quick wheel changes trumped maximum wheel retention. The dropouts are slanted slightly backwards, reducing the likelihood that braking forces will yank the wheel from the fork should the skewer come loose. 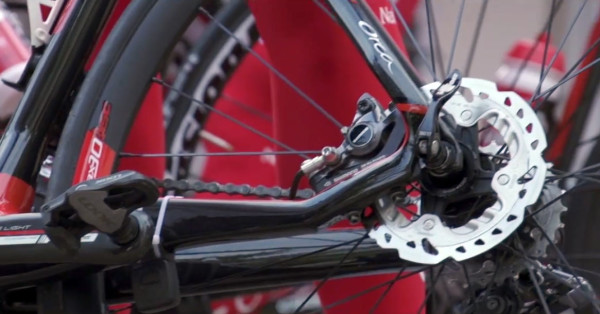 It’s likely Orbea reworked the layup at the rear dropouts to handling the braking forces and used the change to improve compliance in the seat stays. Wheels are Vision Trimax30 Disc, which are available for either 6-bolt or Centerlock rotors. Despite the matte appearance, they are alloy rimmed.

Orbea has hinted they will have a big product launch at some point this year, our money’s on this being it…time will tell.

BIKERUMOR: When did / does it come out?

As you well know, the UCI has approved the use of bicycles equipped with disc brakes in competition next season. Competitions in 2016 will allow riders and teams to gradually add and adjust to the improvements provided by bikes with disc brakes to meet the demands of competition. Therefore, the 2016 season will see riders in the same pack on bicycles with disc and traditional brakes.

At Orbea, we are paying close attention to and participating in this evolution, and we have developed our bicycles to adapt to this new standard. After the stage in Lloret del Mar, and throughout the entire 2016 season, Team Cofidis will also use the disc brake version of the Orca OMR.

BIKERUMOR: What did you have to change about it to make it disc brake ready?

We have developed this model exclusively for Team Cofidis (it will not be available for sale in 2016). It brings together all our knowledge about disc brakes (our Avant was selected Bike of the Year in the Disc brake category by the English magazine) and competition, and it is the product of different field tests conducted with Team Cofidis riders in 2015, in order to offer guarantees during the process of introducing the new brake system in competition.

BIKERUMOR: Any other special features or differences from the rim brake model?

THE ADVANTAGES OF DISC BRAKES: The main advantages of disc brakes are the shorter braking distance, especially in rainy conditions, and a progressiveness that helps us modulate the braking power and decrease the effort required to activate the braking system, thus reducing the energy expended, and in particular, the stress on carbon fiber wheels.

DISC BRAKES AND ORBEA: Since 2013, Orbea has been one of the first brands to opt for this technology, winning the Best Disc Brake Bike award from the English magazine Cycling Plus. Disc brakes on the road are nothing new for Orbea.

THE BICYCLE: The Orbea Orca OMR Disc is a model that has been developed exclusively to allow Team Cofidis to compete with the most advanced state-of-the-art material in 2016. Different tests with the team and in the laboratory have endorsed this bike for competition. It is not an adaptation, a test bike or a transition bike. 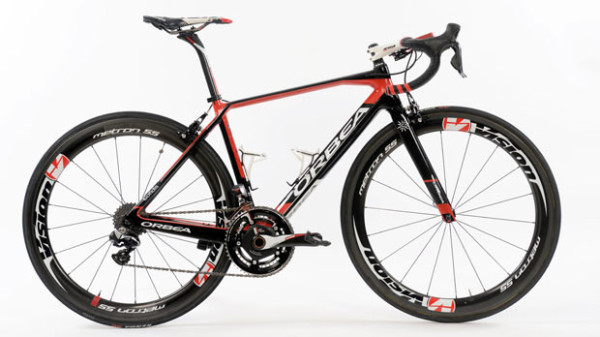 For races (or stages) where they don’t want discs, they’ll have the standard team issue Orca at their disposal, too. 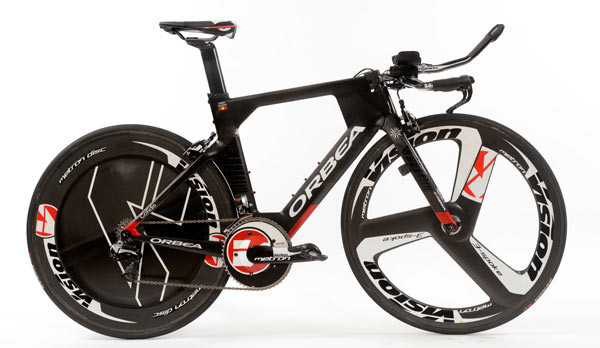 For time trials, they’ll be riding the Ordu, which debuted as new in 2014 and added mid-level versions last summer. Check out of coverage of the team bikes from the 2015 Tour de France for a closer look. 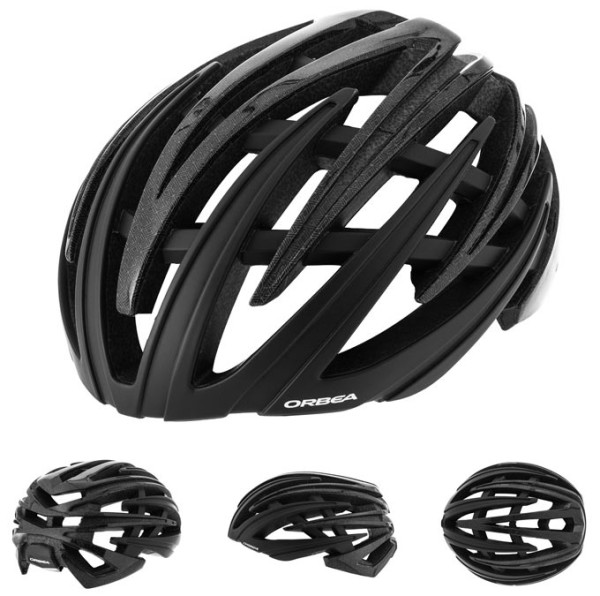 On regular stages, the team will wear the latest R10 helmet, which looks impressive. Numerous vents combine with a very low profile shell to create a wispy lid that dropped 15% of its weight for 2016. They did this by using a less dense EPS foam, but kept it strong with internal ribbing and continuous polycarbonate cover. Orbea’s helmets have gotten progressively better looking and lighter over the years, and this one rivals more well known brands in features and aesthetics. It even has an aero shell available to block cold and rain or just reduce drag. 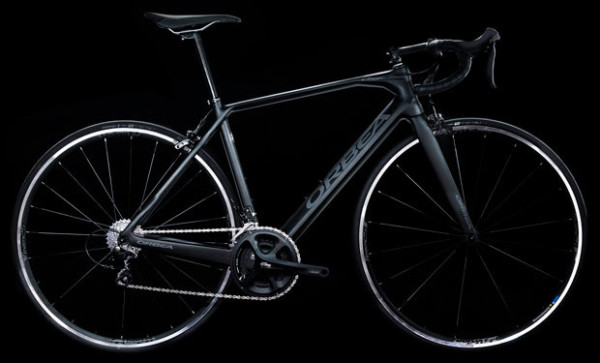 At the other end of the spectrum is the new Orca M35. It uses their OMP level carbon fiber for both frame and fork, much like the other lower and mid-level bikes, but blends Shimano 105 shifting with FSA Omega Compact cranks and Orbea-branded brakes to come in at just €1,999 (£1,599 – this model isn’t being brought into the U.S.). Other spec is good for the entry level offering, including FSA Vision Team 25 clinchers and Kenda Criterium tires, Prologo saddle and FSA carbon headset.

So when they want a heavy bike with terrible aerodynamics that makes wheel changes difficult, they’ll reach for this one. I’ll be anxious to see how many times that thing appears in races.

Cofidis ain’t racing a disc bike, Only one small Dutch pro-conti team Roompot–Oranje will be on discs. It’s a liability. The system will need a complete re-work before it’s ready for everyday World Tour use.

Whining about weight, aerodynamics and wheel changes is becoming more and more redundant as the days go by. The disc naysayers are currently in the hole 0-2. You lost MTB and CX. Road is next. Rinse and repeat.

Poor analogy, and you’re grasping at straws if you have no experience with road disc to back up your soapboxing. I’ve had 3 road disc bikes in the last decade, and have demo’d a TON. It sure does makes perfect sense, but you wouldn’t know that. Steve Hed who was my friend and neighbor before his passing debunked the myth of your un-aero disc brake proclamation in wind tunnel testing. Should we believe you, or Steve? There are disc brake calipers on the market now that are lighter than rim brake calipers by almost 100 grams, but still top line road disc vs top line road rim is still about a pound away. You think that won’t change? Well I’ve seen it all change. C’mon man, your scary campfire stories aren’t working.

Sorry Kernel, I didn’t mean to frighten you! I’m sure your bikes are lovely. And of course, I’ve ridden disc road bikes. They stop beautifully.

I could not find Steve’s wind tunnel data on the ‘net, but of course I’d believe a wheel manufacturer–why would they lie?

I did, however find this: http://velonews.competitor.com/2014/12/bikes-and-tech/discs-drag-wind-tunnel-testing-disc-brake-road-bikes_355621

And from Performance Bike (dated 1/15)

“Because of the simple design, rim brakes are currently much, much lighter than any available disc brake system. And, because of where the brake is placed, disc brakes are also much less aerodynamic than rim brakes.”

A couple things I just learned: Phillipe Gilbert is worried about them because he tends to fall on other people’s bikes in peloton crashes and they’re sharp. Also, there’s some concern about smaller discs having insufficient cooling capacity.

With regard to weight, you say it will equalize. Maybe. But has that happened in MTB? XTR V-Brakes: 566g, XTR Discs: 693g.

So if really nice braking is important to you, enjoy! This is a discussion of pros adopting this tech, not you. And I can’t remember ever hearing a pro saying he got dropped because he/she couldn’t slow down fast/smoothly enough. It’s never happened to me either, and I ran Zero Gravity brakes for years. Those things wouldn’t stop a Big Wheel.

I haven’t tried discs on the road, so I’m going to stay out of the road bike disc argument, but yeah, your point on MTB is dead on. “XTR V-Brakes: 566g, XTR Discs: 693g”. 130g for good brakes is SOOOOOO worth it on the trail. I’ve raced in the road in the rain enough to know that I’m usually worried about my tire grip, not my braking. CX on the other hand…

Agree. You can pry my XTR discs out of my cold dead fingers…

I would argue that the performance gains are less on the road than the performance losses and I don’t remember a strong opposition in CX, but that might just be my faulty memory. I don’t find that in my descending, braking modulation is a significant factor (on the road.) Also, as an early adopter of carbon rims, I’d say the pros had a reason to be wary. They were freakin’ dangerous.

Having said all that, I suspect the pro peloton will eventually (ie years from now) move to disc. Not because it’s faster, but because the industry forces it. In my mind, it will be a situation where it becomes mandatory and thus the entire peloton switches over in the same year.

The article is in English. The embedded YouTube commercial is in French. And the bike is made in Spain.

@Kyle, Many pros in all of cycling chime in and give opinion on new tech but in the end it doesn’t matter what Phillip Gilbert thinks. The same crashing concerns were brought up by a lot of pro CX racers and now 50% of the field at any given race is on disc, and gradually more every year. Lots of road pros also weren’t keen on carbon rims in the mid 90’s, now the norm. Take an objective look at road disc without being distracted by the weight issue; more power and modulation with less effort. And you absolutely can get dropped on a technical course if somebody can brake later into corners because of a better system, a system that is also virtually unaffected by weather conditions. The result is that they are the first ones out of those corners and that is seconds saved. This sport is all about marginal gains, take it where we can get it. Anyway, from my position in this industry there have been very clear signals that road disc will inevitably be standard issue top to bottom, I just chose not to fight it much earlier than most.