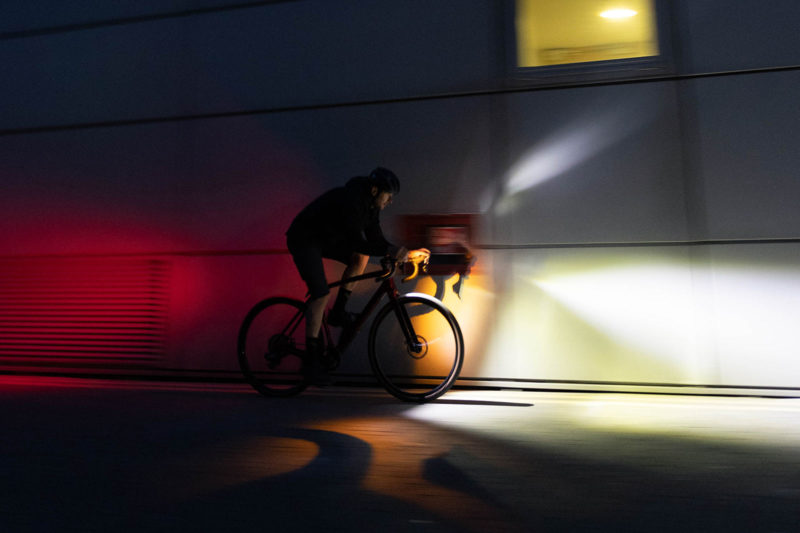 The new Trek Commuter Pro RT headlight makes commuting by bicycle safer for you and other riders and drivers by cutting off the beam before it can blind them.

More than that, the light adds other useful features for commuters and bike touring fans alike and works well with their tail lights, too. 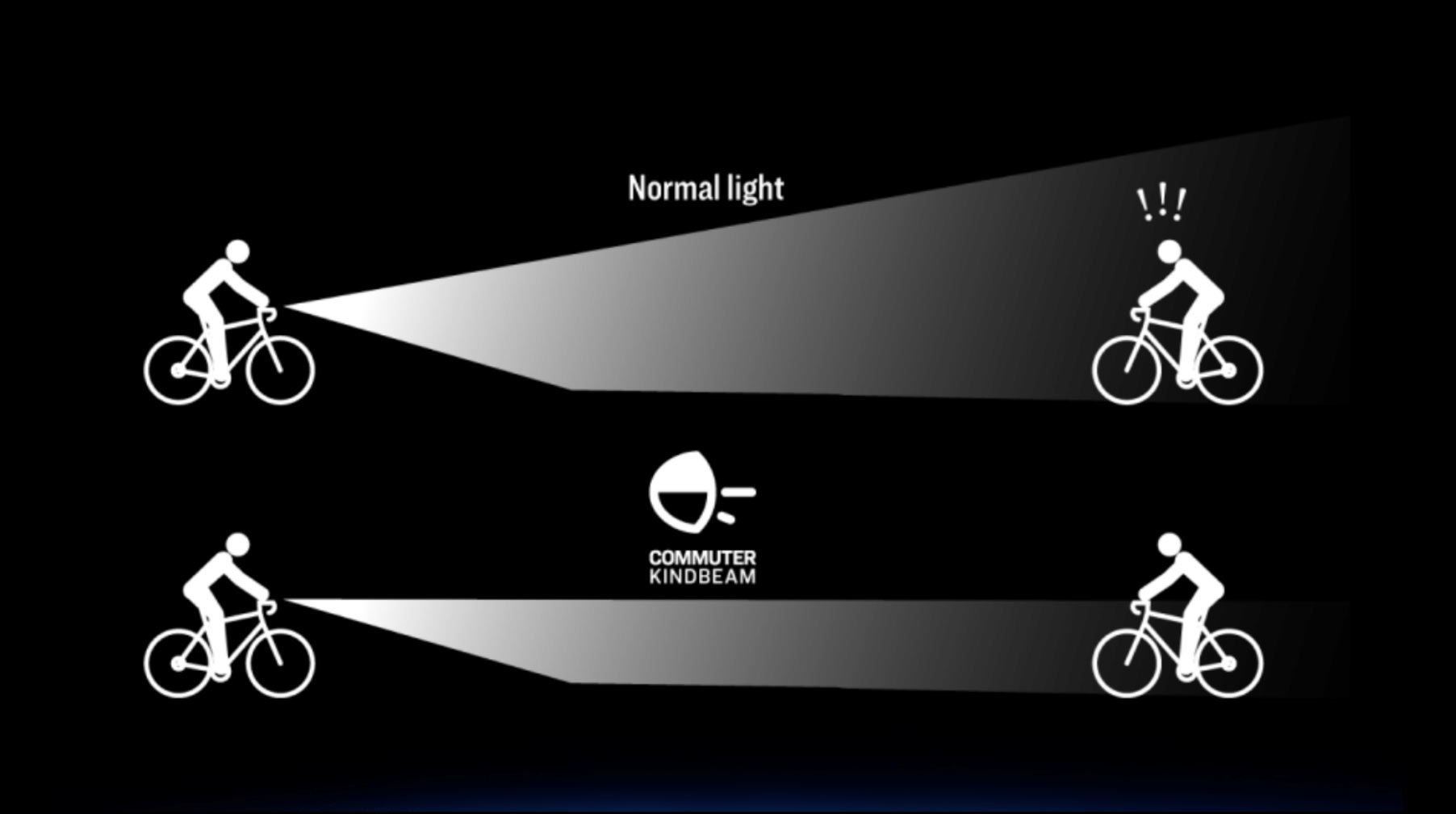 Called the “Commuter Kindbeam”, its revised beam pattern keeps the light where you need it to see the road, path, or trail ahead, but keeps the beam aimed low, well below eye level of oncoming traffic.

And by traffic, they mean cars, pedestrians, and other cyclists. It lets you see where you’re going without distracting or blinding others. 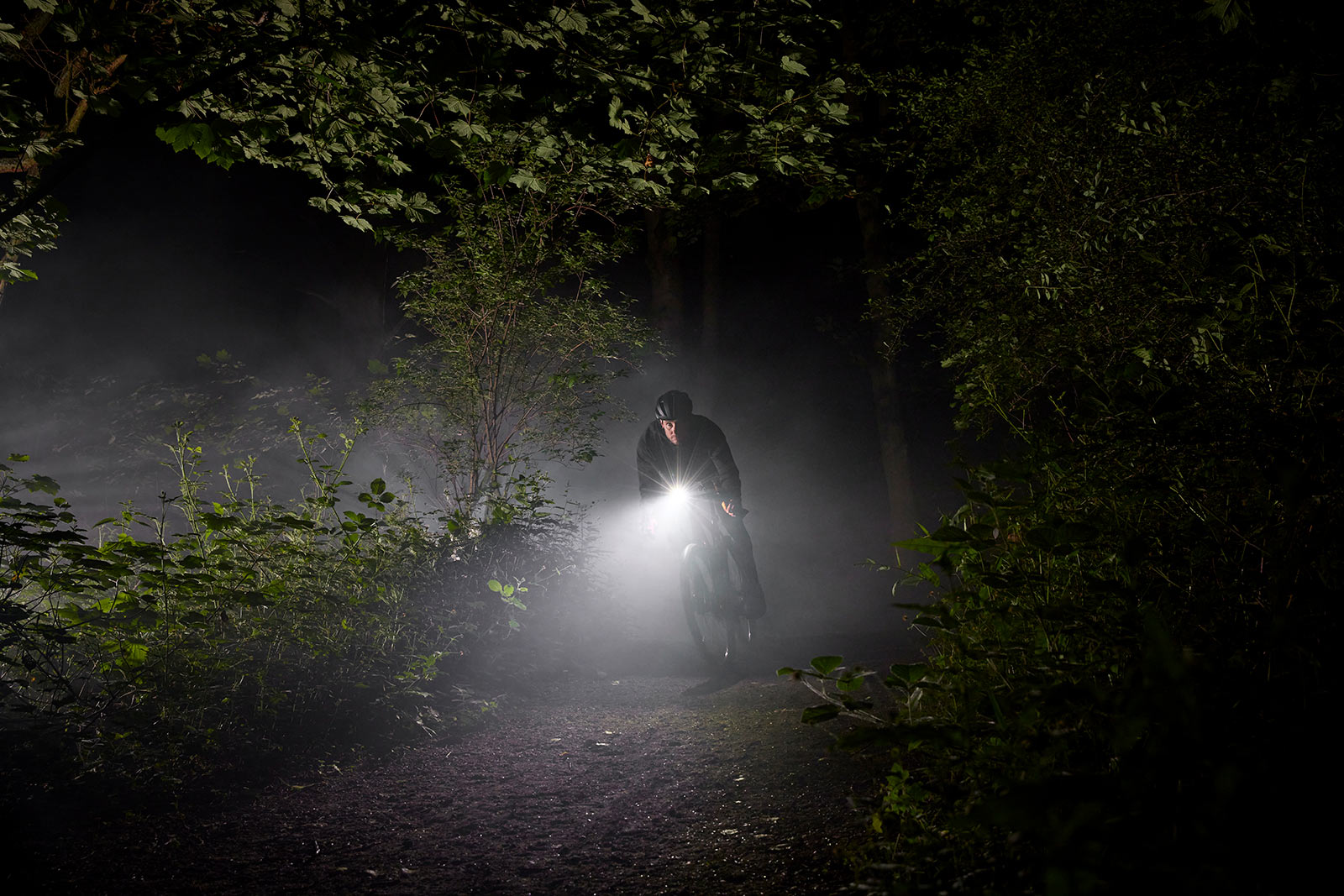 A High Beam mode switches to full coverage so you can see more of your surroundings in low-light areas where oncoming traffic isn’t a concern. Meaning, it’s a great option for those long gravel and adventure rides that may inadvertently end with you riding home in the dark.

During broad daylight, though, a flashing mode provides plenty of visibility so that oncoming vehicular traffic sees you well in advance. 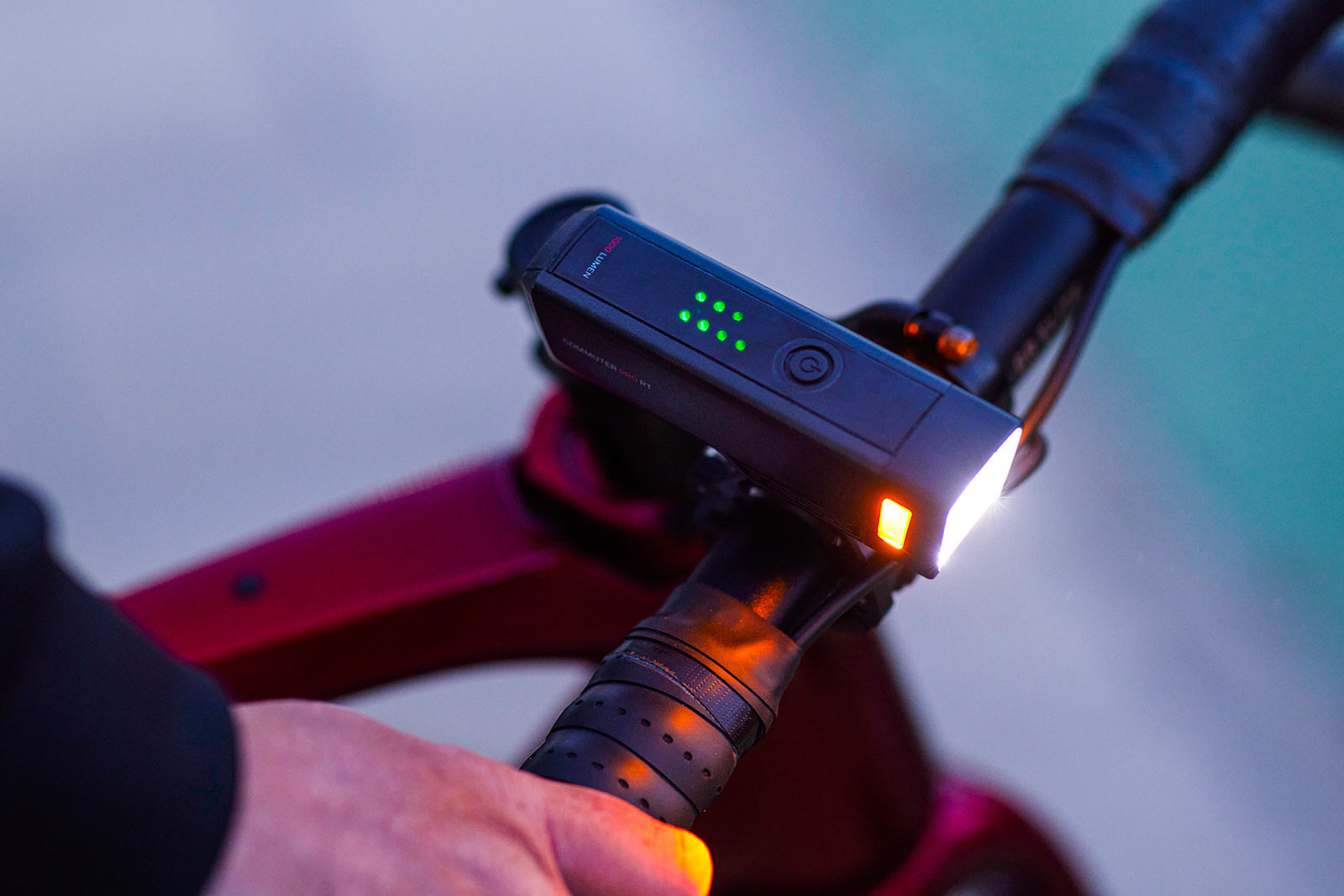 Side marker lights help others see you from cross streets and can even lightly illuminate more of your surroundings.

It’s an “RT” model, so it pairs with their RT tail lights so you can remotely turn those on and off with a single button from the headlight. On top are battery level indicator lights that show the remaining battery of both the headlight and the paired tail light. 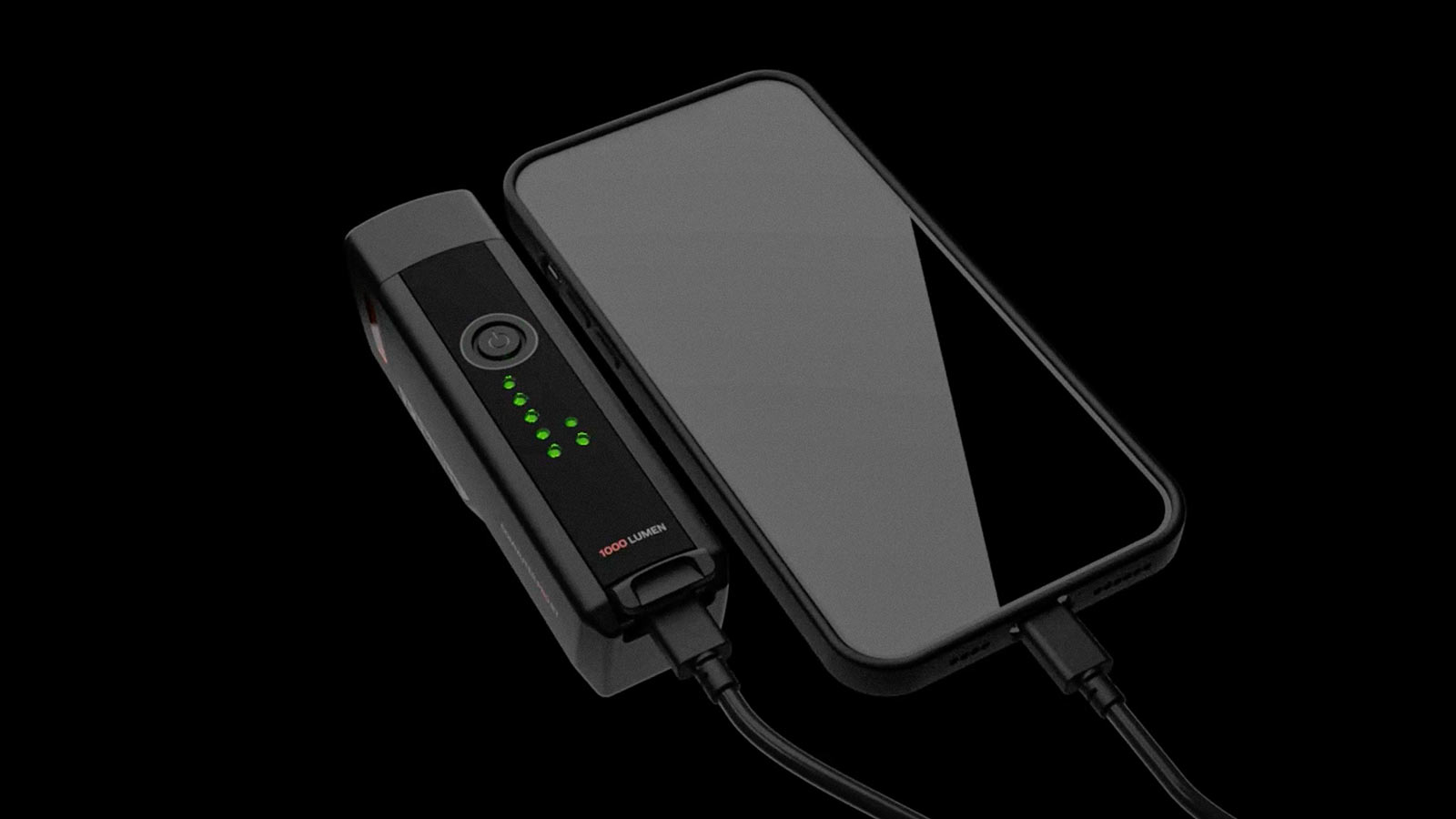 The USB-C charging port works both ways, so you can keep your phone or GPS cycling computer charged up while riding. The light itself will give you 3 hours run time on Low (500 lumens), 1.5 hours on High (1000 lumens), and 12 hours on Daytime Flash (300 lumens). 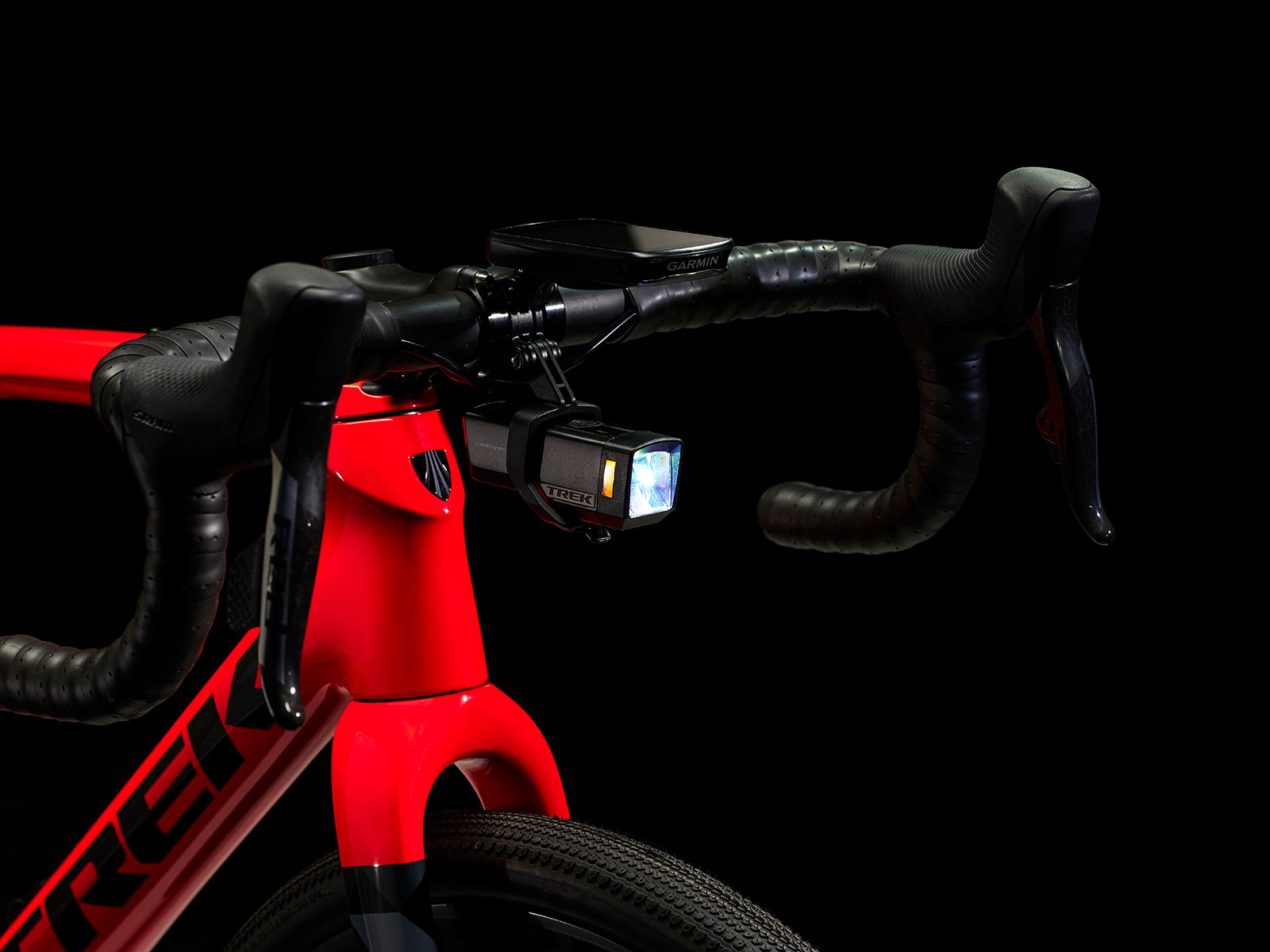 It comes with a standard clamp-on handlebar mount for $159.99, or bundled with the Flare RT tail light for $209.99. A BLENDR mount for attaching it directly to their BLENDR stem faceplate mounts (and under your cycling computer) is available separately ($9.99). It’s IPX4 weather resistant and recharges in 5 hours.

Beneath this top Pro RT  model is a Comp ($69.99) option that delivers longer run times but fewer features and maxes out at 450 lumens.

I might be missing something here, but can’t I just point my regular light down a little?

You can but you will have to point it WAY down to avoid glaring oncoming traffic.

Obviously you can point your light down… but it isn’t the same as a “cutoff” beam pattern here. With a typical circular beam pattern (e.g. Light and Motion Vis lights), if you point it down far enough to avoid light in oncoming riders eyes, the brightest point of the light is very close to your front wheel and doesn’t really shine much light down the road.

With a cutoff beam pattern, you can have the brightest part point of light a useful distance down the road, but then the light beam falls off very quickly above that cutoff so it doesn’t annoy oncoming traffic. All cars have this kind of beam pattern, and more bike lights should too. It’s obviously more important for “see the road” lights than dimmer “be seen” lights.

No ~ The beam pattern on most US bike lights is a fog. To point your light down low enough to not blind others would make 70% of your light useless.

Pointing a light with a conical beam pattern down will accomplish the goal of keeping the direct light cone out of the eyeballs of oncoming pedestrian, cycle, and motor traffic, but it will also push the left and right edges of the cone down, depriving you of some side visibility. It’s polite, but less useful to you, especially at higher speeds where you really want that extra illumination to give you as much reaction time as possible.

I believe that StVzo regulations specify some minimum requirements about side illumination and front-facing beam cutoff angles, and there are a bunch of lights on the market that use a combination of directionally shaped optics and cutoffs that should satisfy these requirements. (e.g. the Fenix BC30 and BC25 are ones with which I’m personally familiar; I know some Glo-Worm lights use shaped optics but no cutoff; and I think Cygolite has a few as well.)

A beam engineered for the purpose is better. I’ve been thinking of buying a $20 Convoy S3 and swapping in some rectangular beam TIR lenses, also available from Convoy. A TIR lens is an optical lens built on the principal of total internal reflection. TIR lenses can have a very sharp cutoff compared to a reflector.

Even when you point down beams will still rise,
Theres quite a few good lights with a cutoff or a decent dip not to blind oncomming.

Outbound detour is probably the one to beat
Stzvo style lights will have the cutoff, but doesn’t guarantee a good beam pattern .

Some anti glare lights such as novsite 1600 and InFun gt 200 has a decent cutoff uet still good enough for single track duty .

Easydo has everyone beat in tech, itll auto switch the beam from high to low(cutoff) for oncomming traffic, sadly lumens are low(500 per mode) and it’s a pencil beam…so essentially trash pattern.

We need more light manufacturers to give is colored lens options like Amber, yellow and green , or atleast start ditching the blue hue white lights for a warm white..

If “beams still rise” this still has the same issue as it can go out of adjustment, or not be adjusted correctly to begin with.

Not saying it’s bad though.

3 hours of runtime on the “low” setting is a bit too short. I find it strange that Trek also has the Bontrager Ion Pro RT that has a low setting (400 lumens) with twice as long runtime. If I have to choose, I would rather go for the one with the longer runtime, granted at slightly lower lumen. Unfortunately, the Bontrager Ion Pro RT does not have a cut-off beam.

So what should a customer do? And are either of these “regulated”?

Every single headlight should have this at least as an option. It’s mind boggling that it’s not the case. Besides the courtesy, having a proper cutoff means there’s more light going where you need it to go, so it’s brighter for the same output.
Light &Motion, Niterider need to step up.

Detours cutoff is so sharp\good, that it’s too much for my mixed usage (limited visibility when turning). For this and the remote reason I’ve recently picked up the Ravemen LR1600. Not really known light yet, but it’s really great, just like other stuff from them. I will make small unboxing and presentation video about it. I’ve also compared it with a friend’s Bontrager Ion Pro Rt, which is also nice, but the lowest setting is too high as well. That’s why even with smaller battery LR1600 is getting better run times.

I bought an outbound light a couple years ago and I was disappointed with it. It was better than your typical light, but it put way too much light 20 feet in front of the bike and not enough further down the road. The rest of the light was top notch, but they missed on the most important part.

Yes, but it wasn’t that good.

I have Outbound Lighting’s original Road Edition from over 4 years ago that does this beautifully, and just picked up their new Detour that’s self-contained like this one, but with a cleaner under-GPS adapter setup. Good to see big companies finally catching up to the little guys here (the more users with cutoff beams the better), but from the looks of it they still have some refinement to do on the beam pattern and overall package. I’ll have to compare them in person sometime to see for myself!

So… essentially what has been a TUV Standard requirement in Europe for more than 20 years, with a fancy North American marketing name… This is not new. Just a new spin on European bicycle lights, for North America.

I still don’t know why it’s not common to have a low mounted light close to the bottom of the front fork? This flat pattern mounted low would be just like car fog lights. Lights are small enough now, just run a wire from the main light on top to a secondary light on the fork. The pattern could go very far out that way. That used to be a trick of ours to help us see the terrible potholes in the roads. High and low lights.

Because those still have the same problems as other conical beam lights. Not as severe, but a shaped reflector with a beam cutoff is better.

Hmm, can’t find any mention of this, but can the cutoff lens/bulb be flipped vertically so that the light can be mounted upside down (using those blendr mounts) and still not blind the incoming traffic?

You can see the new under mount in one of the pics. Keeps it oriented normally

Or you could buy just about any light made for the German commuter bike market (Busch+Muller make quite a few models). They’re required to have lights on their bikes and the rules are quite strict about things like cut-off to prevent blinding drivers.

I fully understand beam cut-offs and Germans predictable obsession with standards, but how are people actually adjusting these.
Maybe I’m wrong but I think your average person slaps a light on, points it to where they think works best for them and rides. Doesn’t mean it’s adjusted correctly at all.

It’s a parallel to auto headlight tech, but the height of those is generally fixed (sans lifting) and most (if not all) auto level.

I guess the people that care will have nicely adjusted lights

Considering how bad people are with headlights in cars I feel that somehow someone will still manage to blind oncoming with this.

I’ve been commuting on my bike year round for quite some time now. I’ve used lots of different lights and the best light, bar none, I have used is the B&M Ixon Space. B&M knows how to control the light beam better than anyone else. They have a sharp cutoff and shoot the light far down the road. So it makes the best use of the available light. Most lights waste light output putting it where you don’t want it. If this light controls the light as well as the B&M, then it would be a good light. B&M are hard to get in the USA, so having a large network of dealers selling a good light would be a good thing. I especially like that if you connect it to a tail light it will switch the tail light on and off. The price is steep, but if it works as advertised, it is worth it.

Has anyone already tried to control it from Garmin Edge (on/off, light mode)? They do not mention this option in the specification as they does for Bontrager Ion Pro RT.