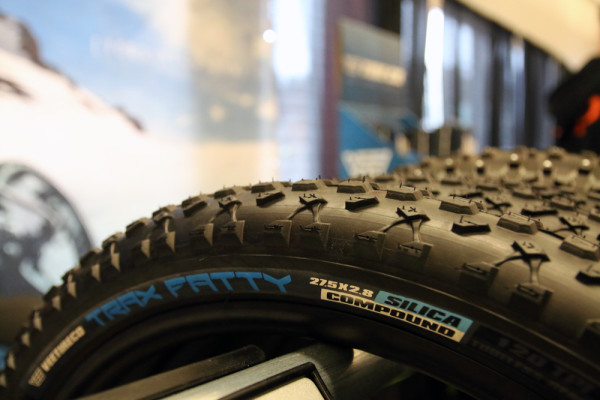 Just under a year ago, we caught wind of the first 27.5+ offering when Vee Tire Co. informed us that their Trax Fatty model would soon be available in a 27.5×3.25″ model. Looking around the show there were a few generic bikes fitted with the new tire size, but nothing that would have suggested it catching on in a big way. Now, headed into Taipei show and Sea Otter season there still aren’t a ton of options but it seems like the tide is swelling.

Originally planning just to offer the 27.5×3.25″ size, Vee is introducing two more widths to round out the line. Meant to fit better in smaller frames, Vee sees the Semi Fat market exploding in the coming year… 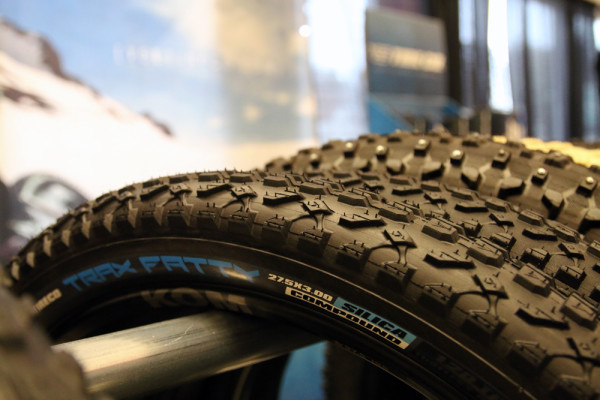 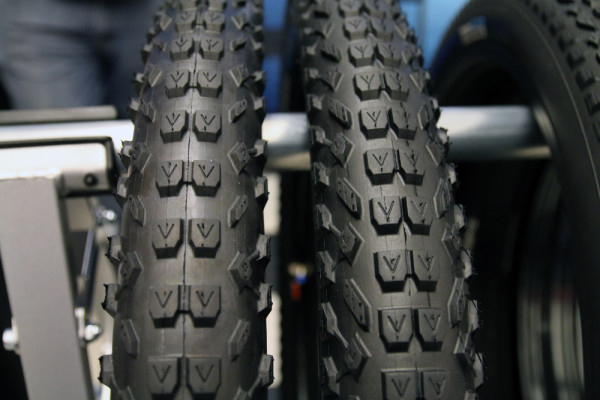 Now available in 27.5×2.8, 3.0, and 3.25″ widths, each model has similar tread patterns but with knobs sized appropriately for each width. Available mid-April, the new 27.5+ sizes will have folding and wire bead options along with 72 and 120 tpi casings. The side by side comparison above isn’t very accurate since the 3.0 on the right is mounted to a narrower rim than the 2.8″ on the left, but you can make out that the 3.0 will have larger tread blocks. Pricing will run from $90-120 depending on the options. 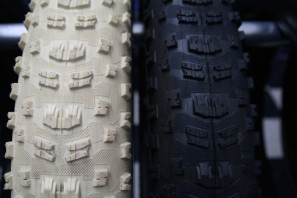 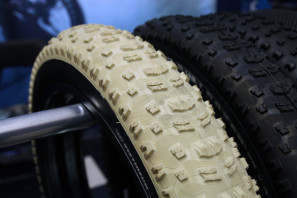 As part of their role as the official tire sponsor of the Snow Epic, Vee is also introducing a new white tread compound for fat bikes that offers more than just unique looks. Rather than blending silica with black carbon in the rubber compound to create their standard black silica tread compound, the white tires will use a pure silica mixture that supposedly offers better traction in snow. Initially available on the Bulldozer and Snowshoe XL fat bike tires, the white compound should carry a $20-30 premium over the standard tires.

A big improvement over 2.0 tires, but lets not go to far and mess up the chain line, q-factor and bike weight too much.

the (admittedly early) indications from bikes being shown at trade shows is that the purpose built b+ bikes are going to be 148 boost in the rear, so there’s going to be at least some tomfoolery.

That said, as long as I can get tires small enough to fit a 29er frame, it’s all good to me.

My prior experience with Vee’s Quality Control has not been great. The Trax 29 has had issues burping sealant at the bead for a number of individuals. The rated weight on the H-Billy has been off significantly as has the carcass rating. Here’s hoping that as the brand becomes more popular the tires will arrive made closer to specification. They show lots of promise at a good pricepoint, but with the fat market still emerging such purchases are a bit expensive to be used as trial and error.