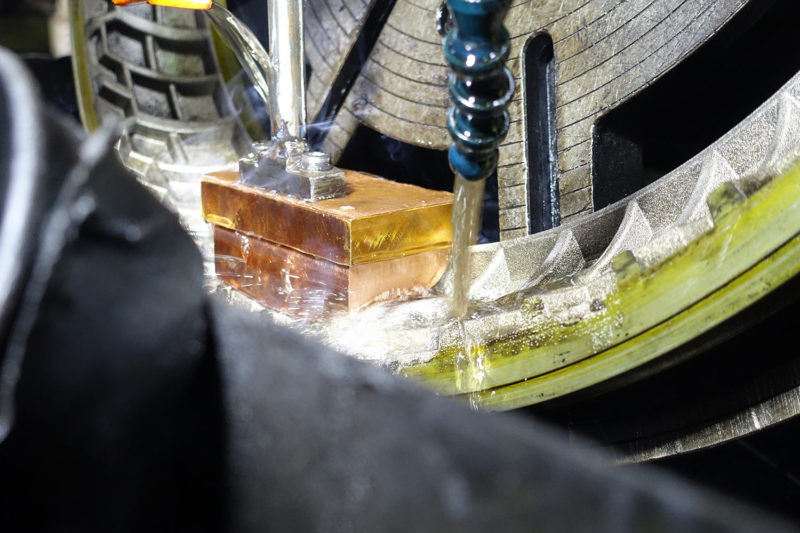 In Part One, we saw how they go from collecting sap at the rubber tree farm to creating raw rubber blocks. That’s the starting point, but once it arrives at their factory, it’s time to turn it into something that’ll grip the ground we ride on.

What separates Vee from many other bicycle brands is that they actually own the entire manufacturing process. They even make their own molds, which is a fascinating process, so we’ll start there… 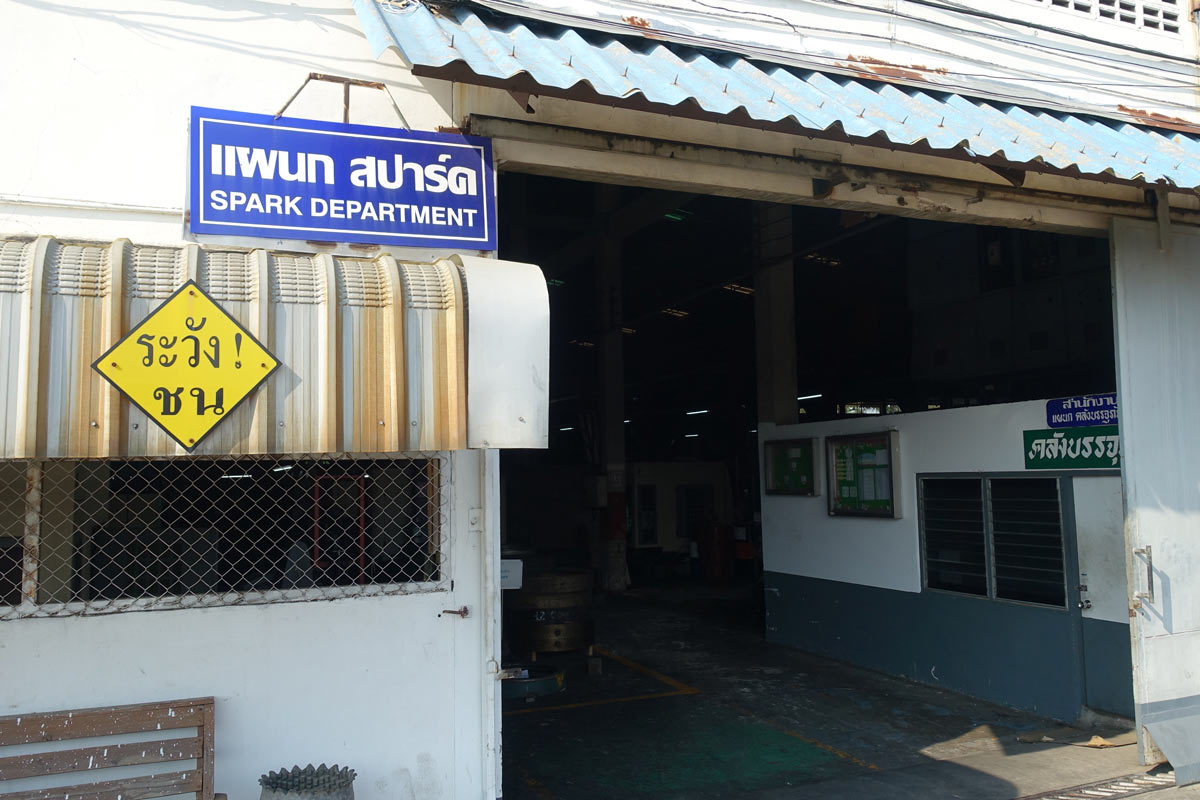 The Spark Department is where Vee makes their tire molds for bicycle tires, moto and others. Inside are rows of machines, each tasked with a different part of the eventual tire’s final look. 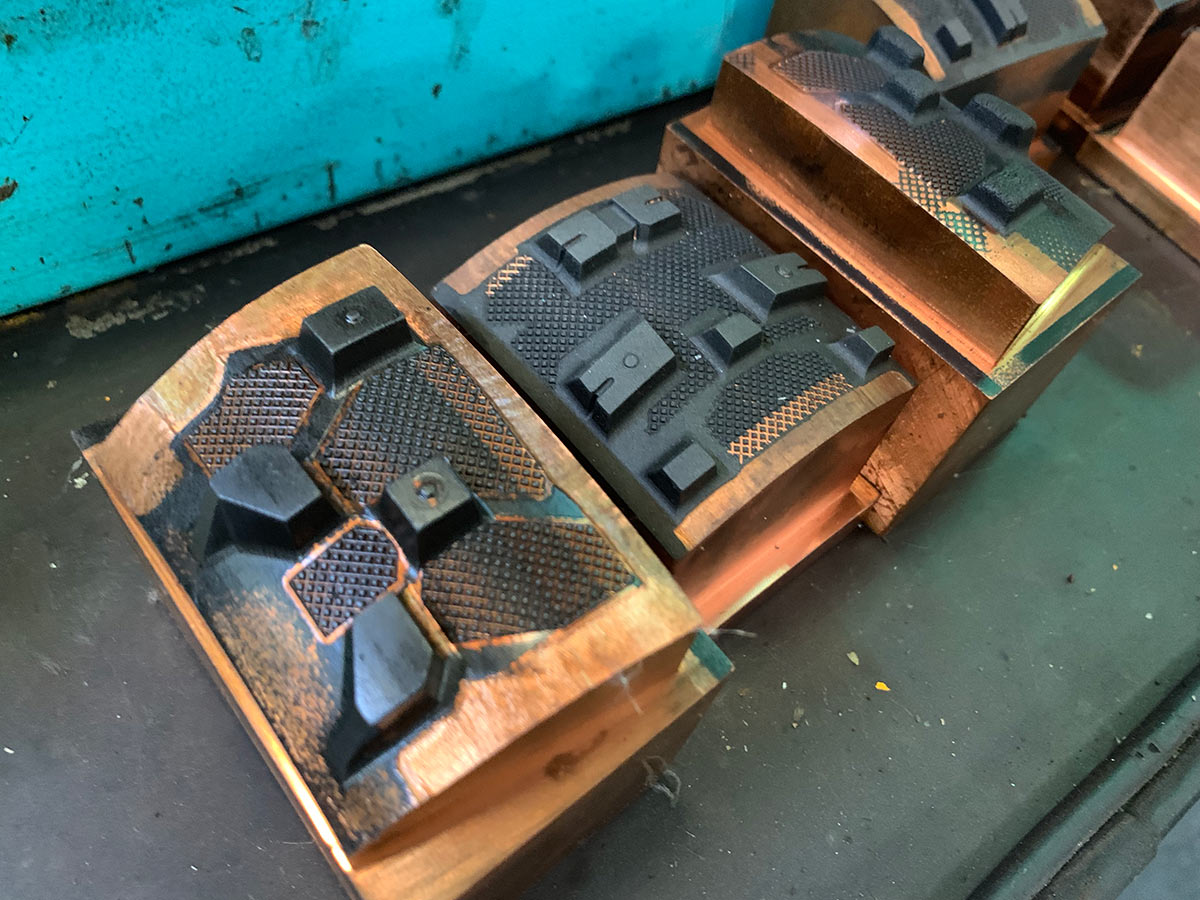 After their designers create a tread pattern, it’s divided into segments and machined into a “negative” mold, which is actually the shape of the tread as you’d see it on the tire. It’s a “negative, because it’s the opposite of what needs to come out of the actual mold. 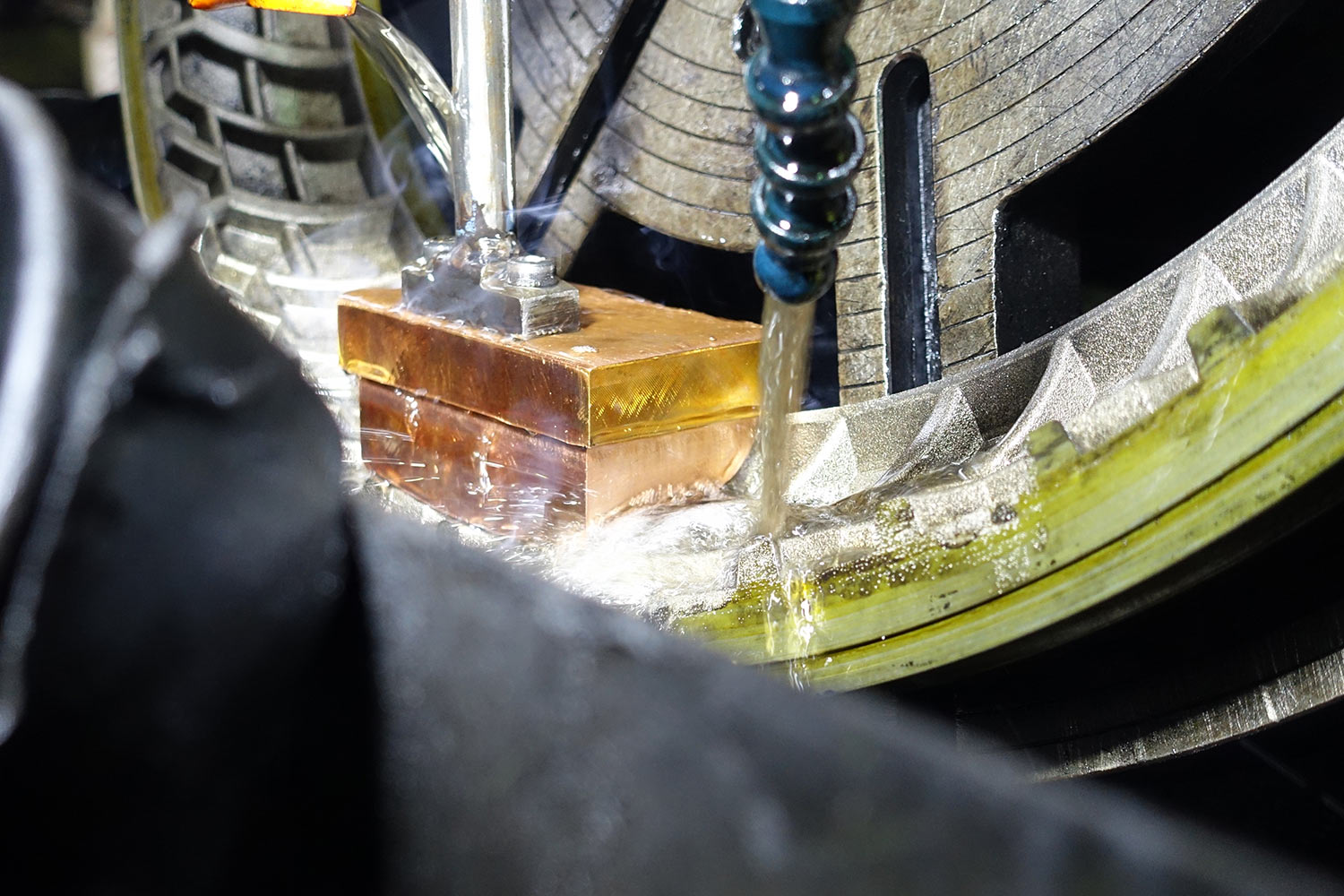 These pieces are a highly conductive material, copper in this instance. A very high voltage current is cycled through it rapidly as it’s moved up and down over the mold. Each repetition erodes a tiny layer of metal off the mold though a process called EDM, or Electrical Discharge Machining.

Water runs over it constantly to both cool it and wash away the small metal bits. The negative never actually touches the mold, its only the current that erodes the metal. 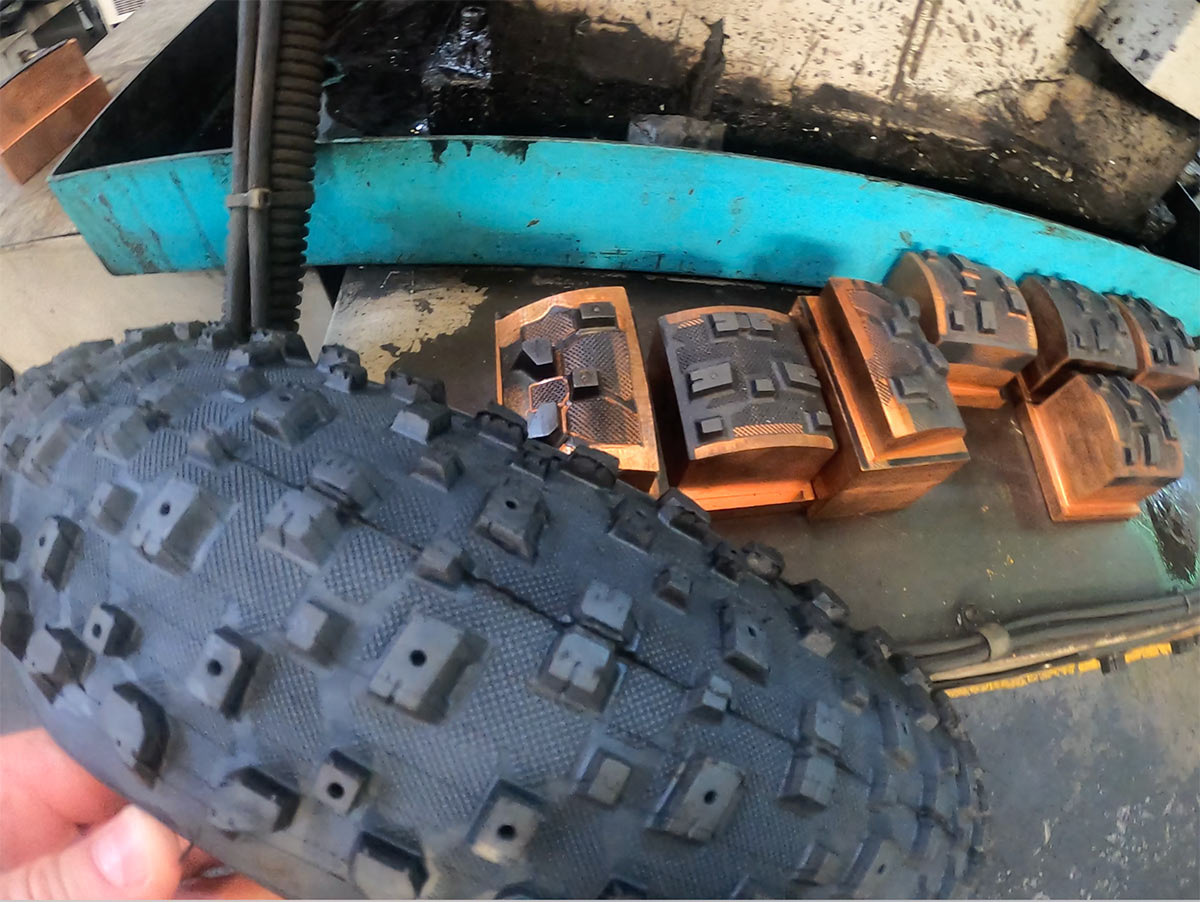 Each mold section takes 3-4 days to cycle all the way around the mold, and each bicycle tires require 2 to 3 pieces to create a full tread pattern. While that may sound slow, Vee Tire Co. can go from sketch to prototype in 30-45 days. And that is fast. 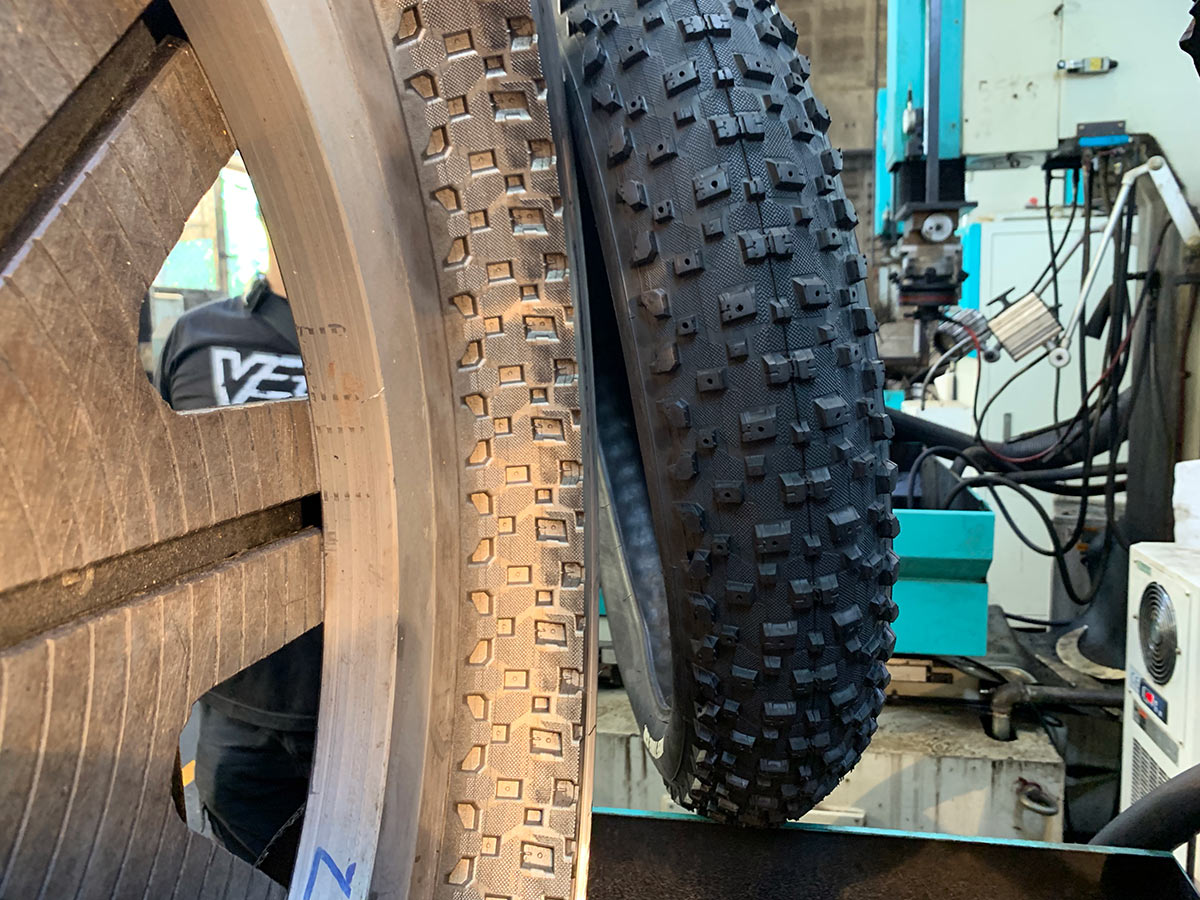 The molds are created in left and right halves. This is so the tire’s carcass can be placed inside, then sandwiched into the mold during the final phase of manufacturing. We’ll show you that process in Part Three. 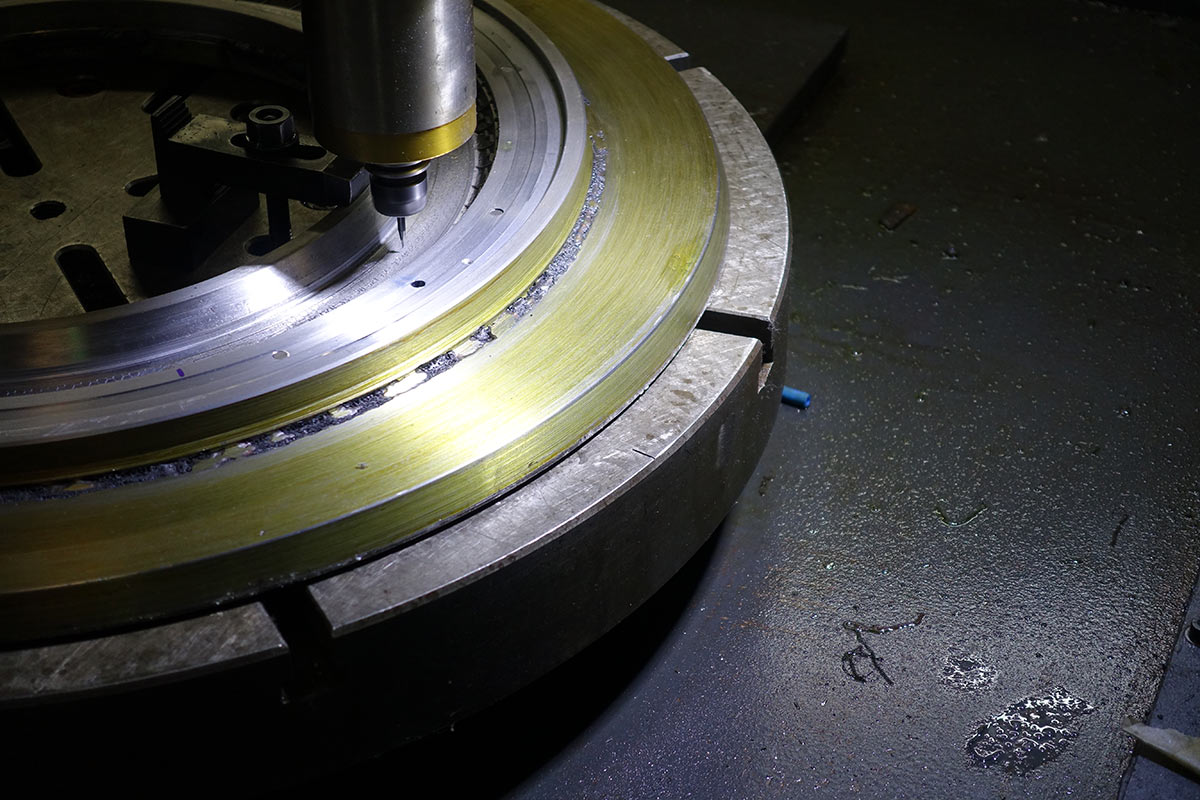 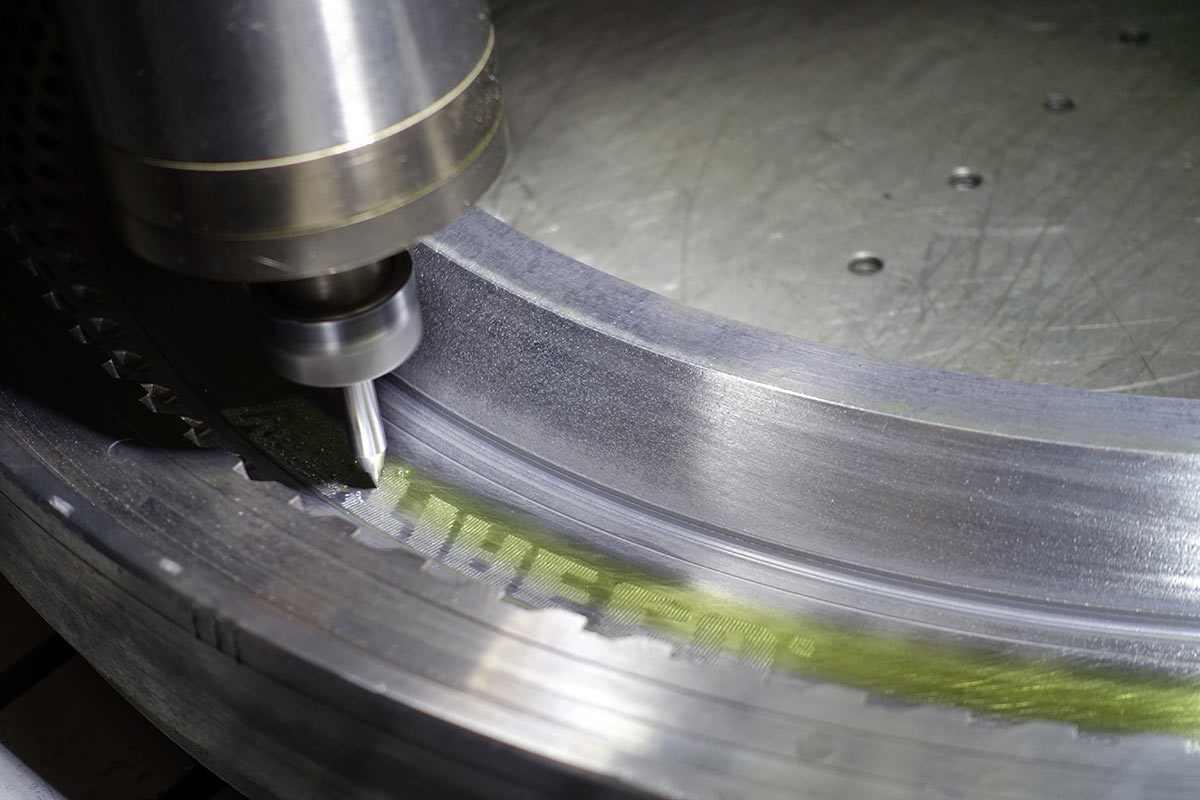 The molds also get the specs, logos, tire pressures, and other little things you see on the sidewall etched or machined into them before they head to the production room.

The tread design is one of three main factors in a tire’s performance. The second is the rubber compound, which dictates durability, grip, rebound and more. And Vee blends their own rubber, so let’s head over to their Bicycle Tire Department…

How Vee Tire blends their rubber 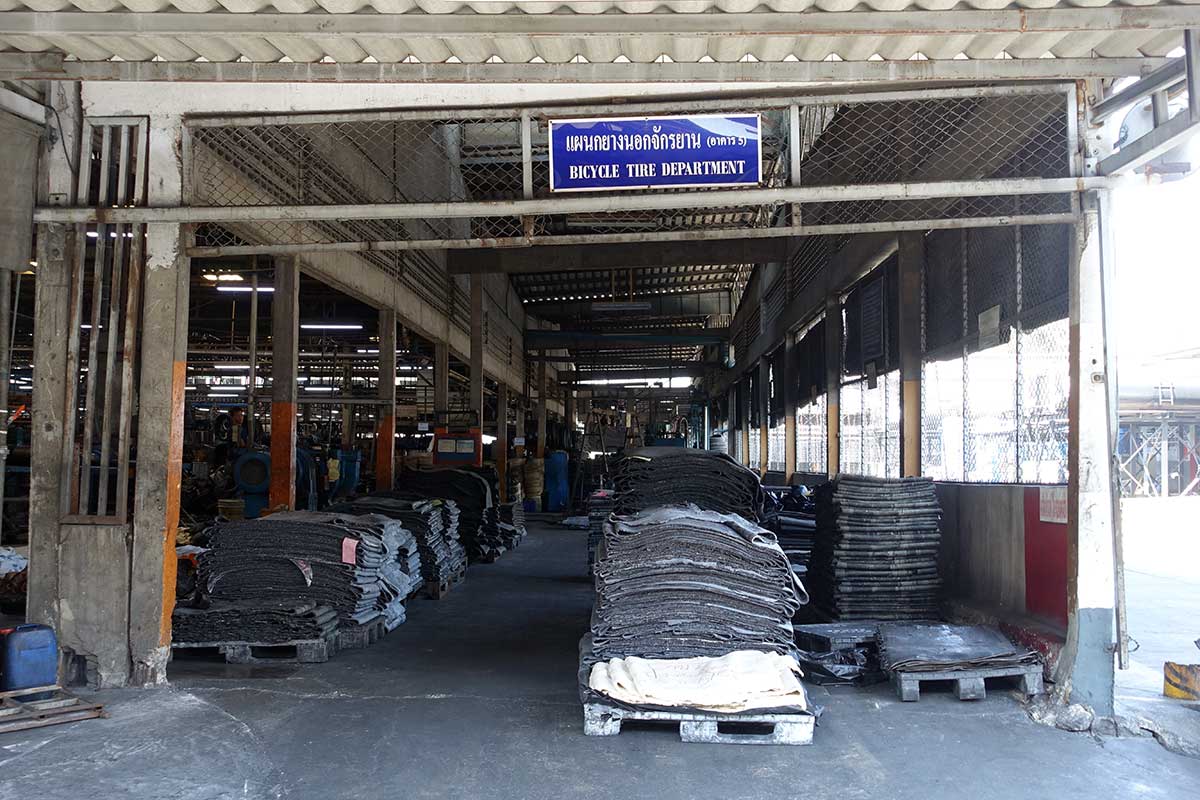 Actually, let’s step back for a moment. Back to the front gate.

Vee’s factory makes tires for almost any consumer vehicle that uses them. Cars, motorcycles, scooters and, of course, bicycles. They also make the inner tubes, and we’ll show you those in Part Three. It’s a huge complex with several long rows of buildings: 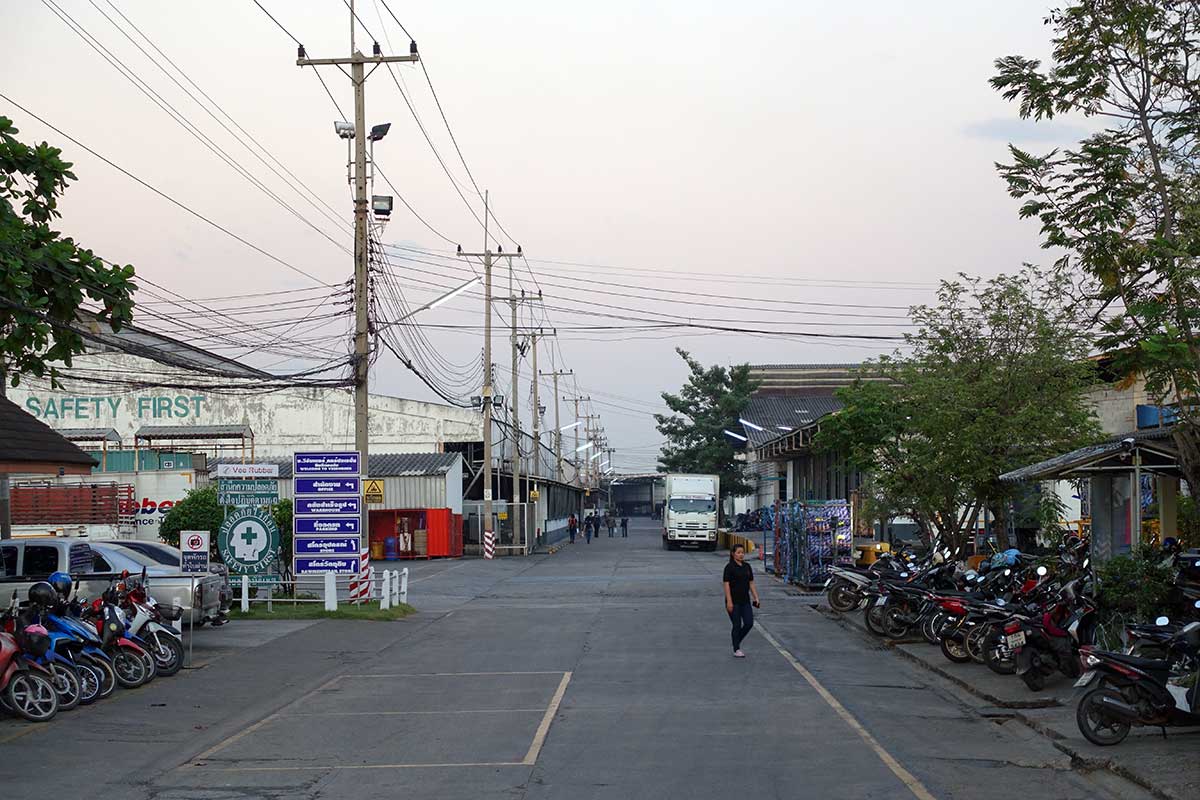 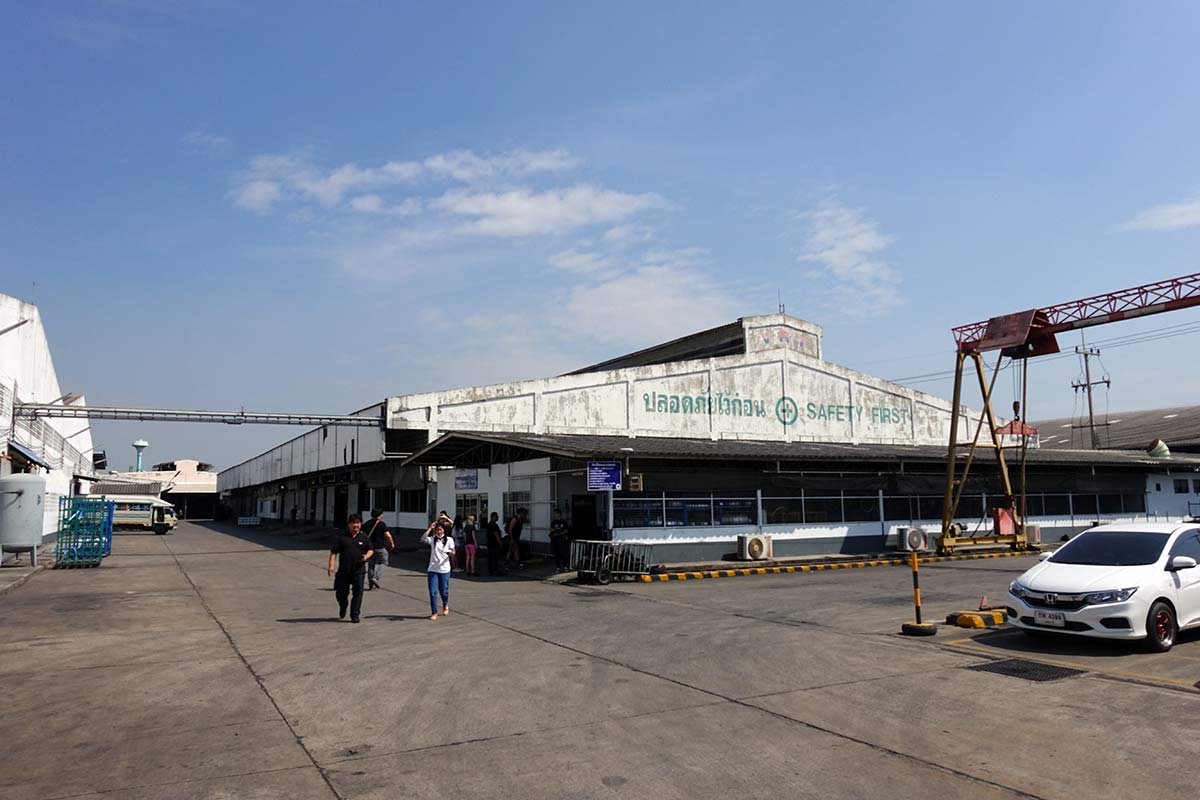 Enter the compound and it seems low key…until you step inside any of the buildings. There, it’s a hive of activity, from blending and processing to cutting and molding. Even testing and packaging are done here. 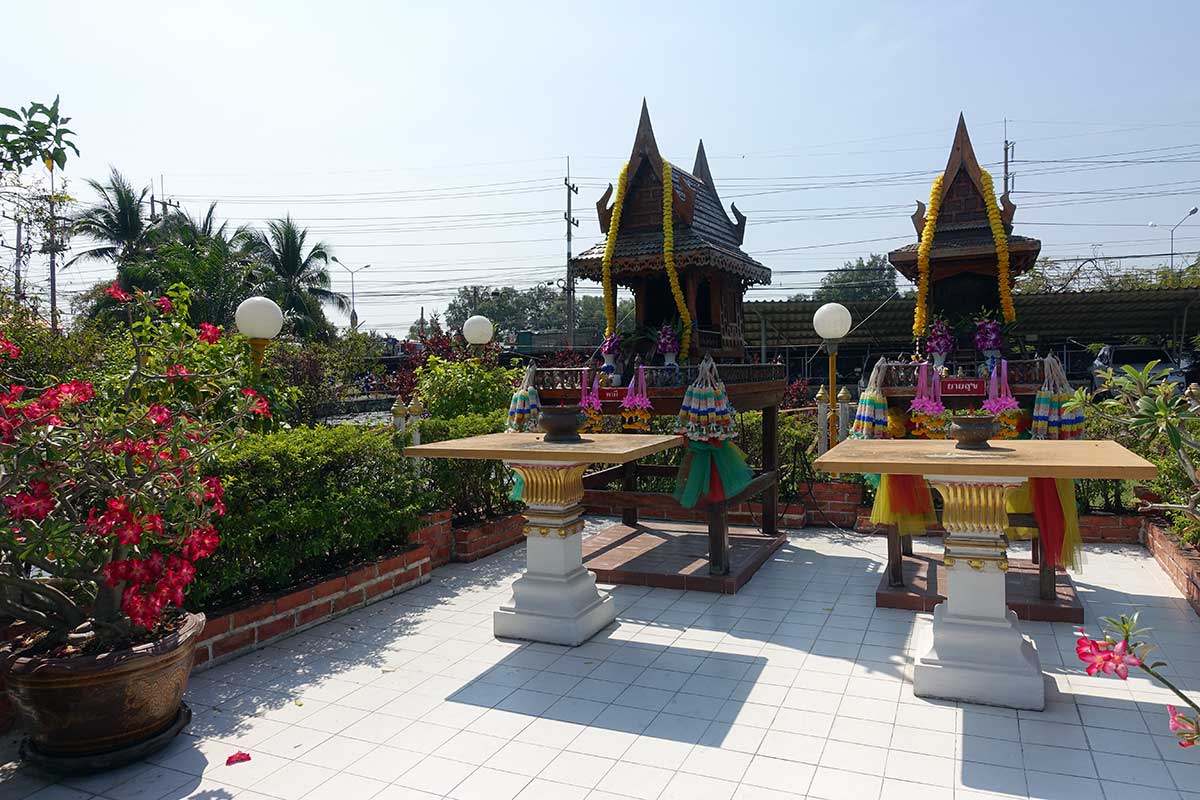 Adjacent to their main offices is this small shrine. You’ll find small temples and spirit houses throughout Thailand. Almost 95% of the population is Buddhist, and Theravada Buddhism in particular.

You’ll see monks walking about town, but you should never touch them. Nor should you speak ill of Thailand’s royalty (they’re led by a king), as it could land you in jail. They take it seriously, so don’t even say something in jest. 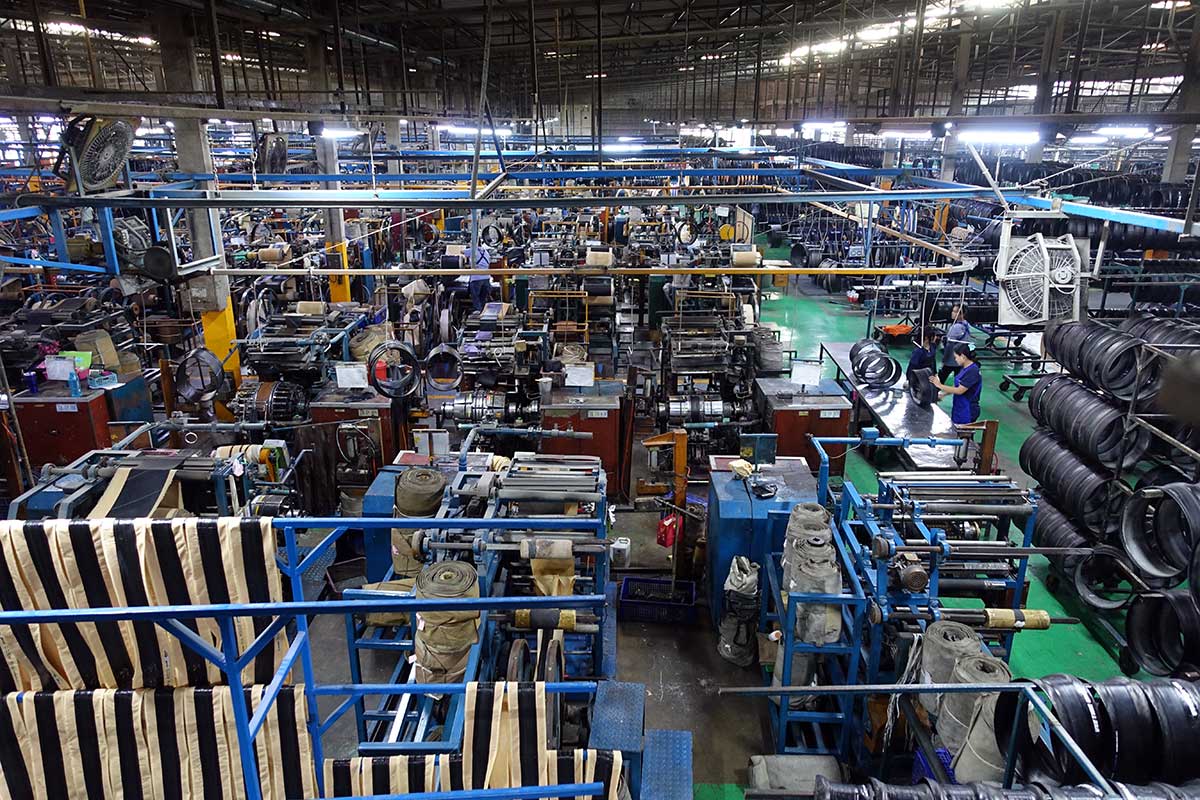 Vee’s bicycle division turns out about 2,000 tubeless tire casings per day. But again, we’re getting ahead of ourselves. First, they have to blend the rubber…

How to turn raw rubber into a bicycle tire 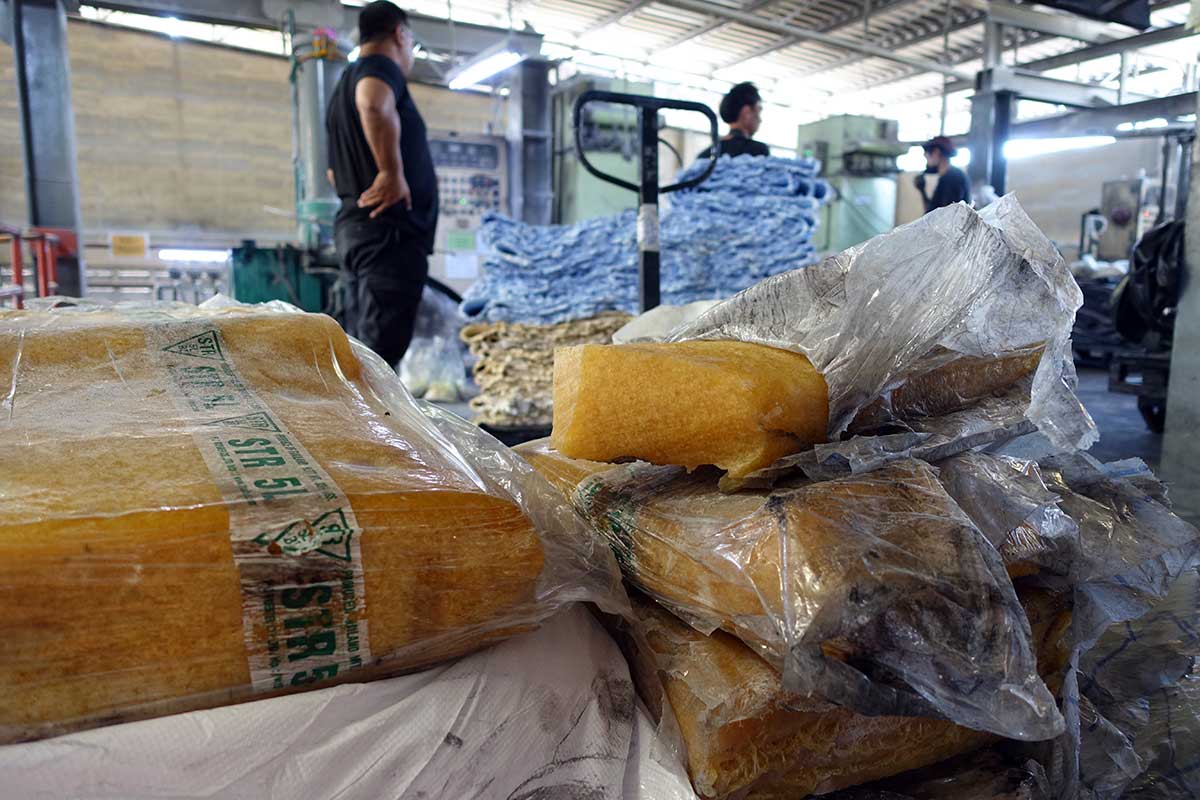 Remember those big, raw rubber bricks that left the processing plant? They land here, along with a bunch of additives that Vee uses to create different compounds. 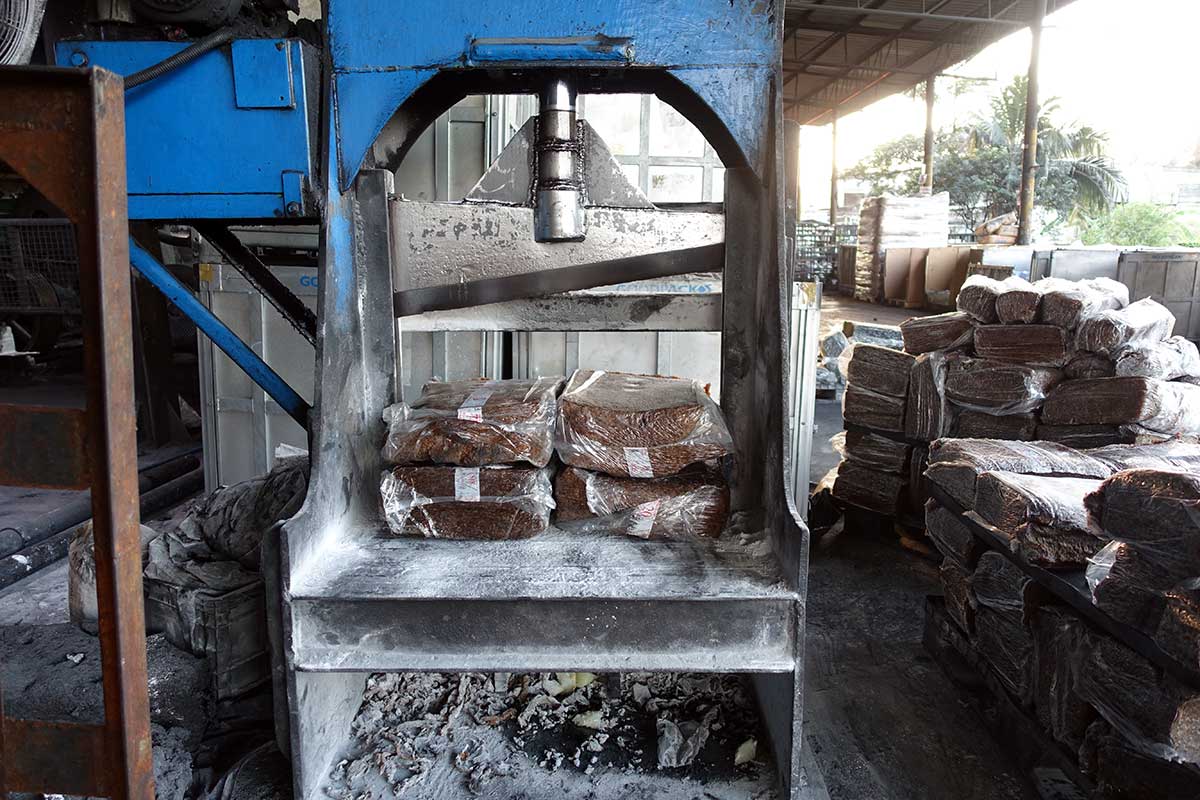 Before they get up to the blending stations, they’re cut into smaller, more manageable blocks. 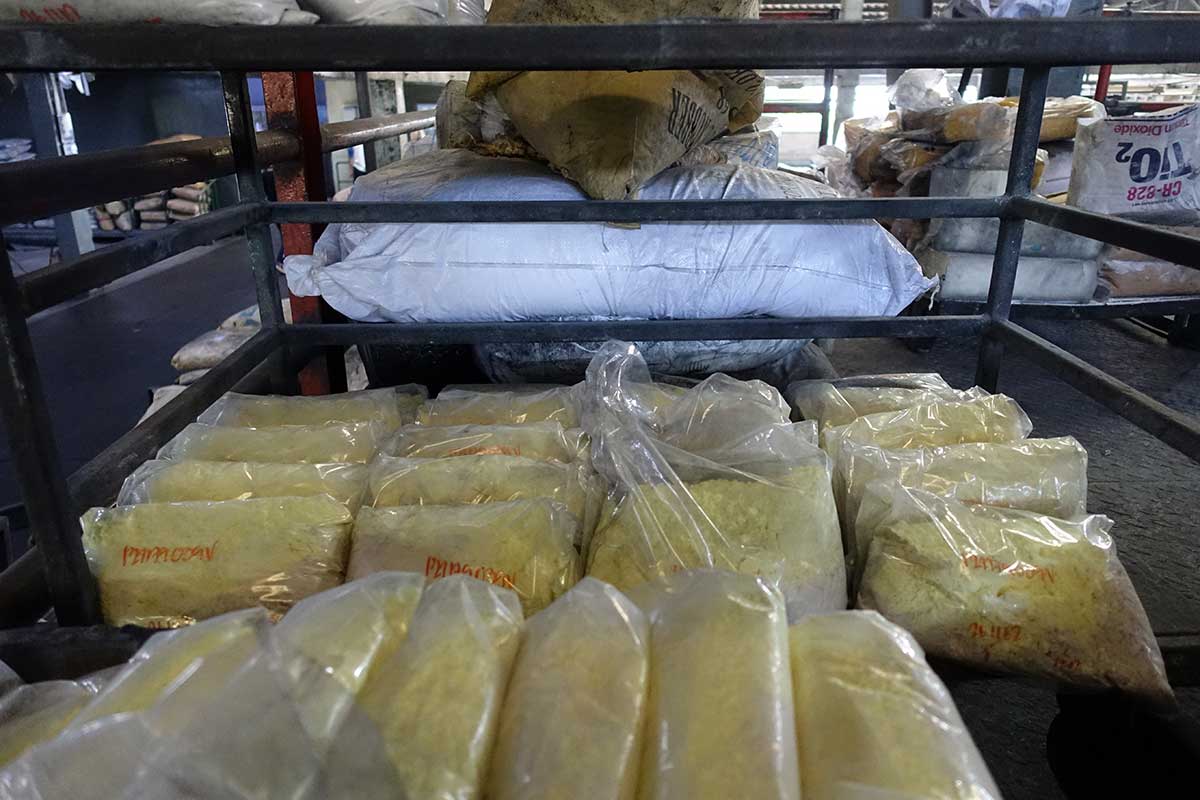 Natural Rubber, black carbon, and various chemicals are sorted, measured and prepped for blending. They wouldn’t tell us all their secrets, but silica is definitely used for its magical ability to both increase grip and decrease rolling resistance. How much of it goes into a particular type of tire is up to their engineers. 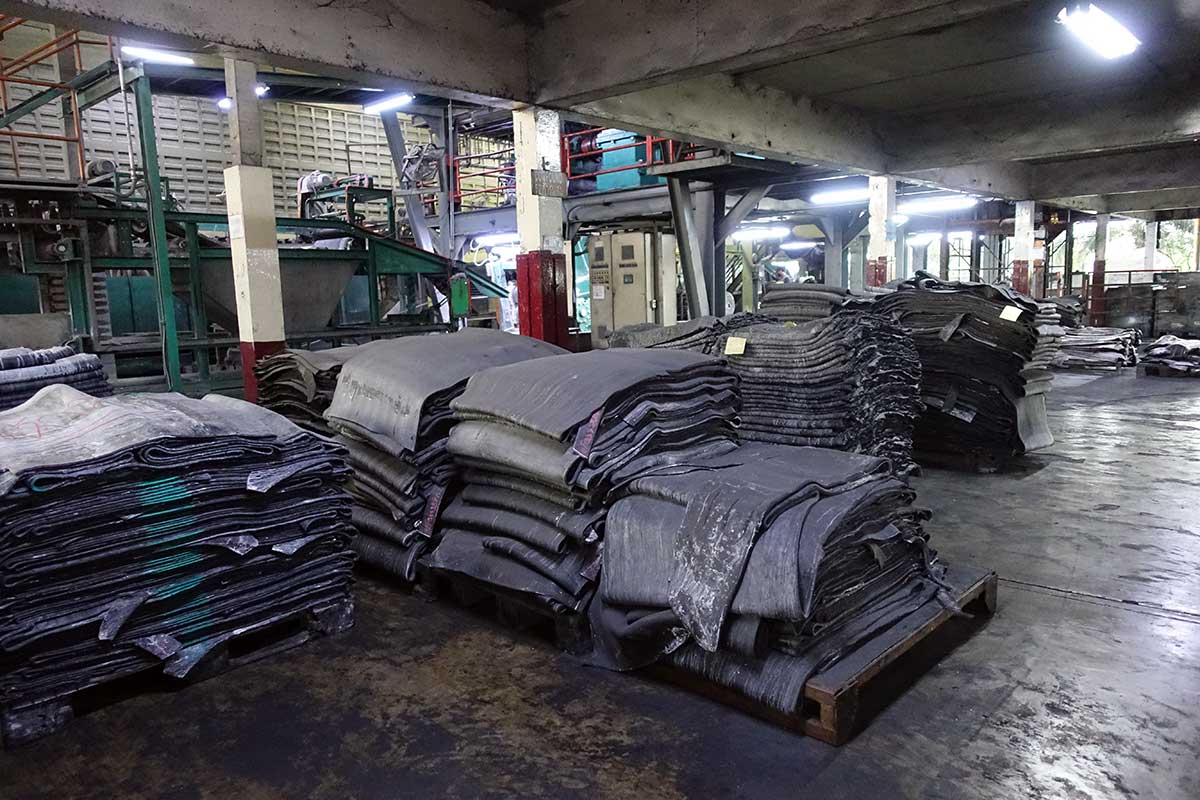 The rubber is blended in steps. First, the carbon is added to turn them black. It’s not just cosmetic. Carbon black, which is basically just a very fine soot, improves rubber’s durability and helps it transfer heat better. It also adds protection from UV and ozone so your tires last longer. 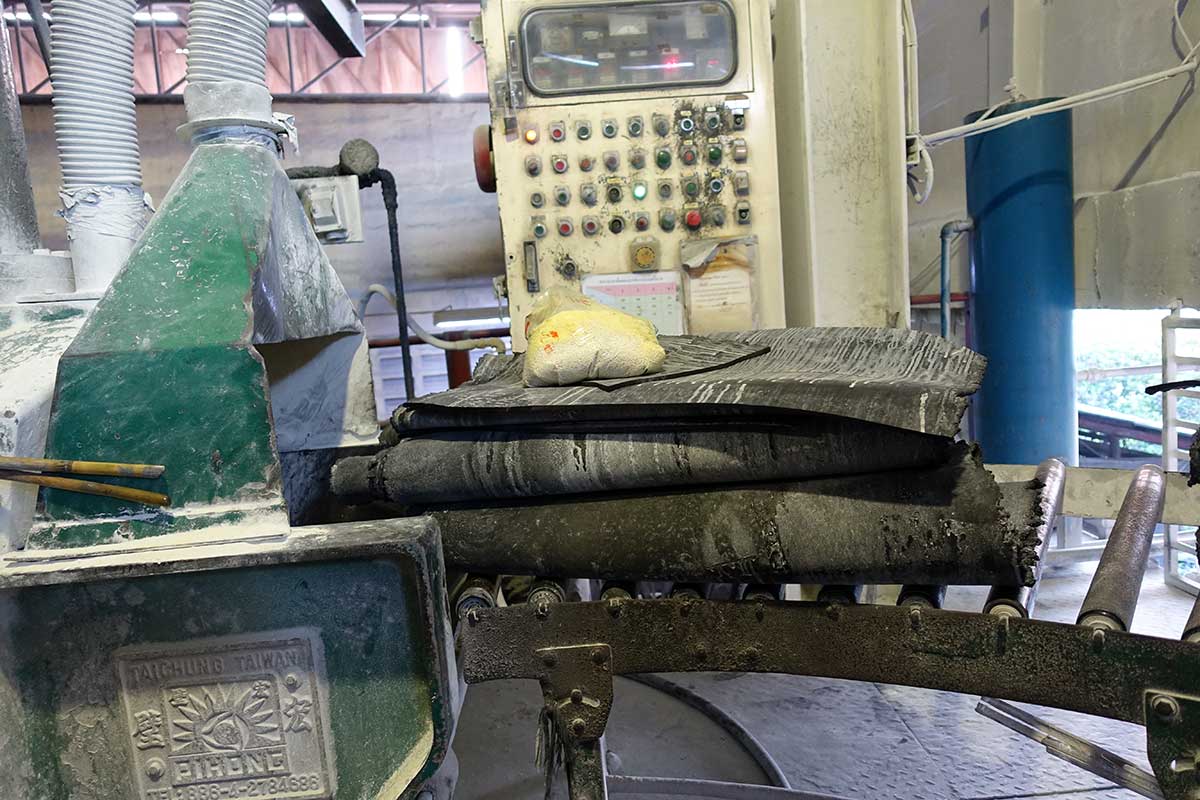 From there, it’s weighed and stacked with the particular additives needed for a particular type of tire. All of this isn’t just about performance either…it’s about making the rubber behave more predictably.

Natural rubber would change its characteristics too much with temperature fluctuations. Too cold and it gets too hard. Too hot and and it’d be too soft. Mixing the other stuff in makes it more consistent and gives the rubber the properties they need for a given application. 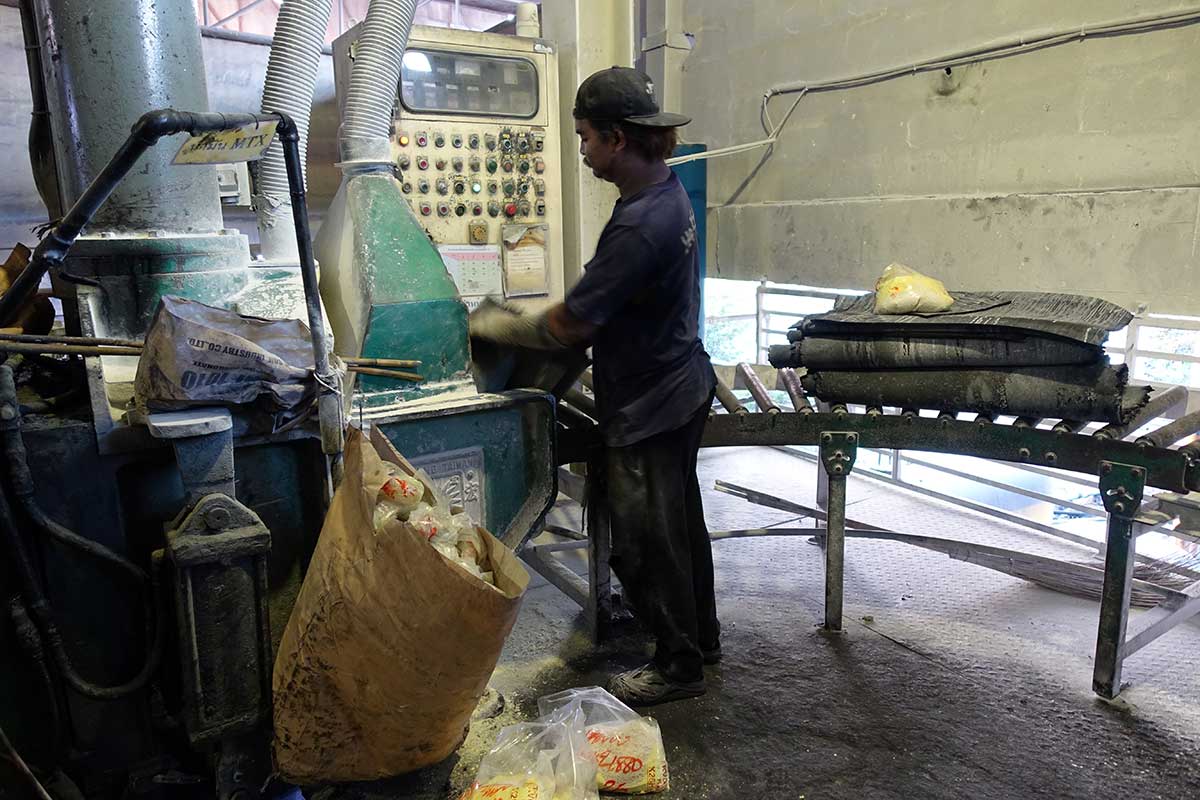 Then down the chute it goes, along with a lubricating oil to help it all mix together. 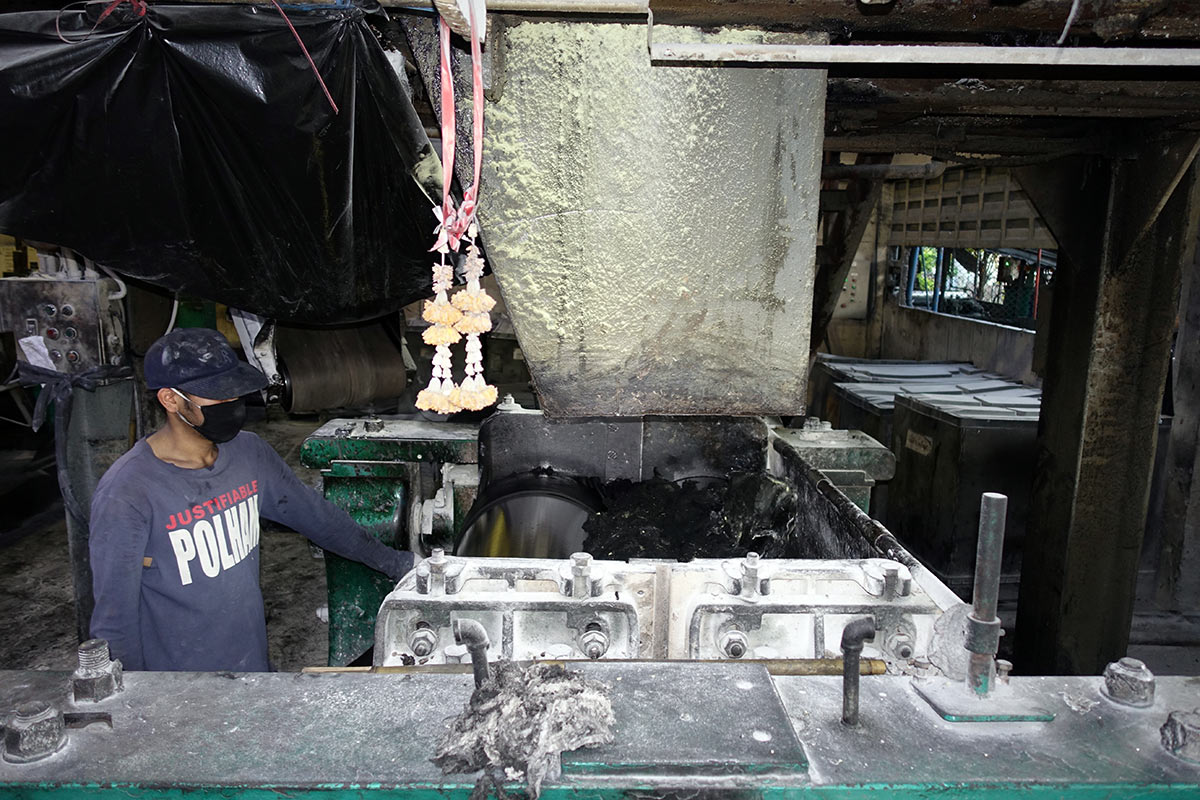 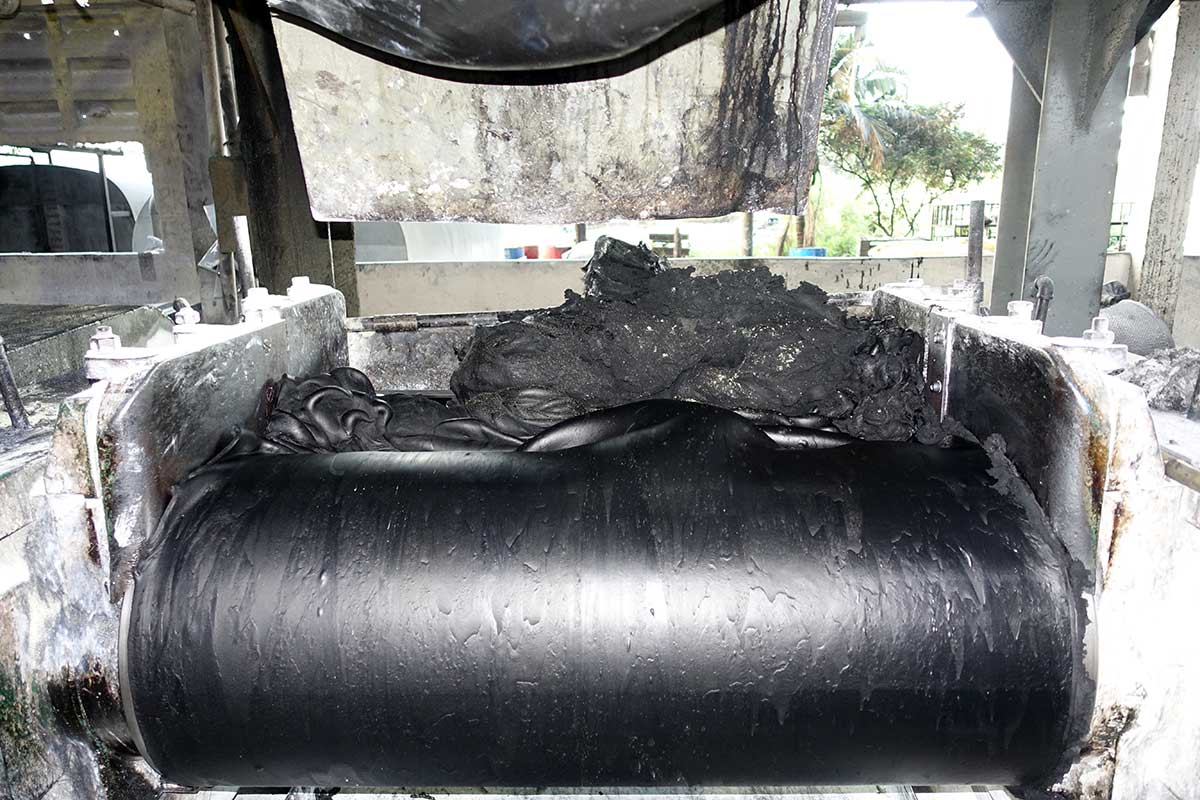 The materials drop into a giant heated masher, which rolls it all together to blend it. From here, it moves onto a second masher for more blending, then gets rolled out into thin sheets that are taken into the next building where they’re merged with a nylon casing. That’s the first step toward actually looking like a tire. 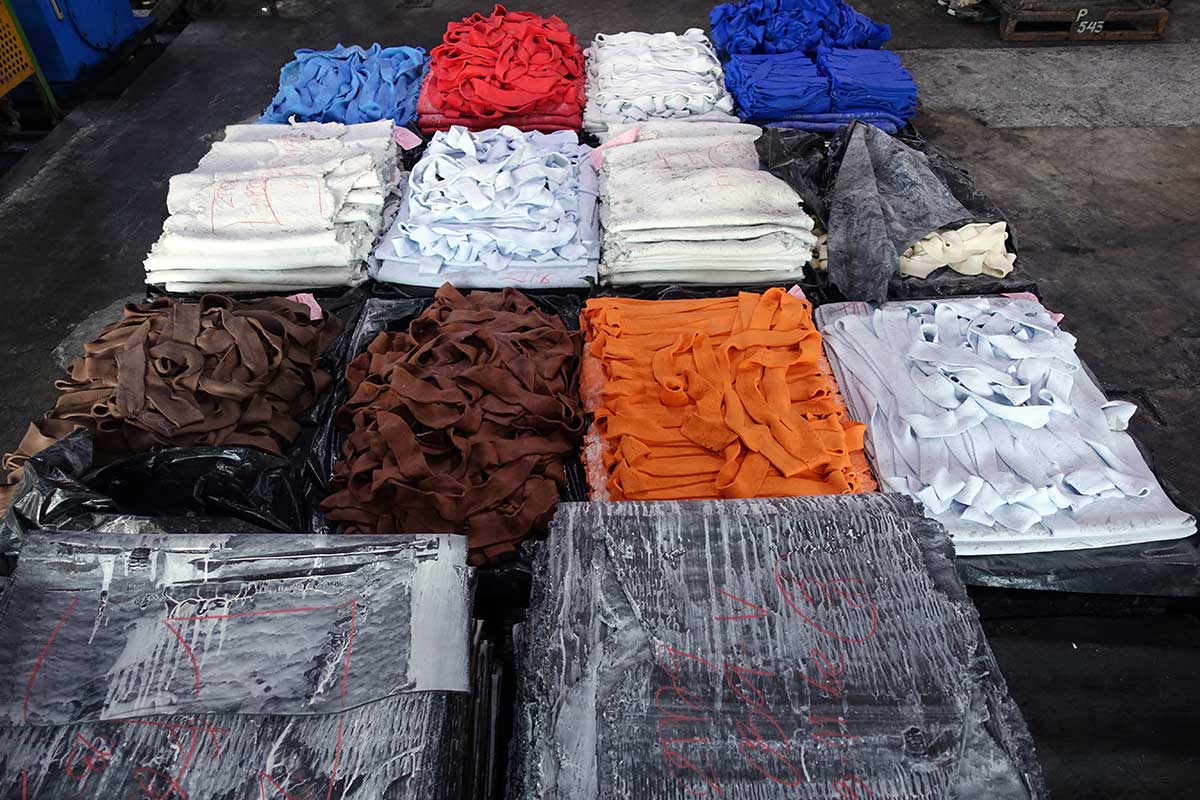 It’s worth pointing out that other additives (like magnesium oxide) can produce similar strength and necessary performance attributes in rubber, so they don’t have to be black. Vee makes a lot of different colors for different kinds of tires. 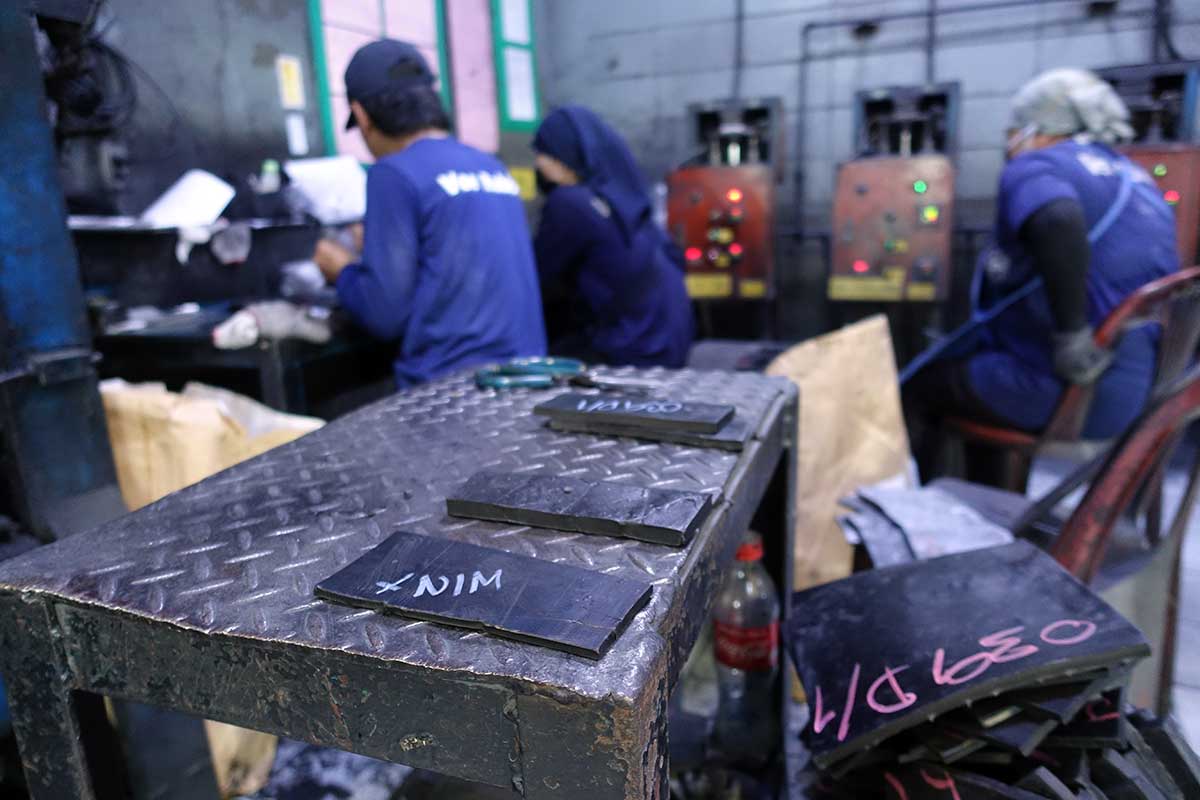 The blended rubber is batch checked throughout the process to ensure it’s meeting the desired performance goals. Things like durometer and stretch are checked, so they know it’s good before it gets too far down the line.

So, tread pattern and rubber compound done. The third part of a good tire is its construction. Stay tuned for Part Three, where these molds and materials go from processed rubber into a complete, ready-to-ride mountain bike tire!

Looking forward to part 3, the Vee Tire Co series has been great so far. Too bad this is not a video.