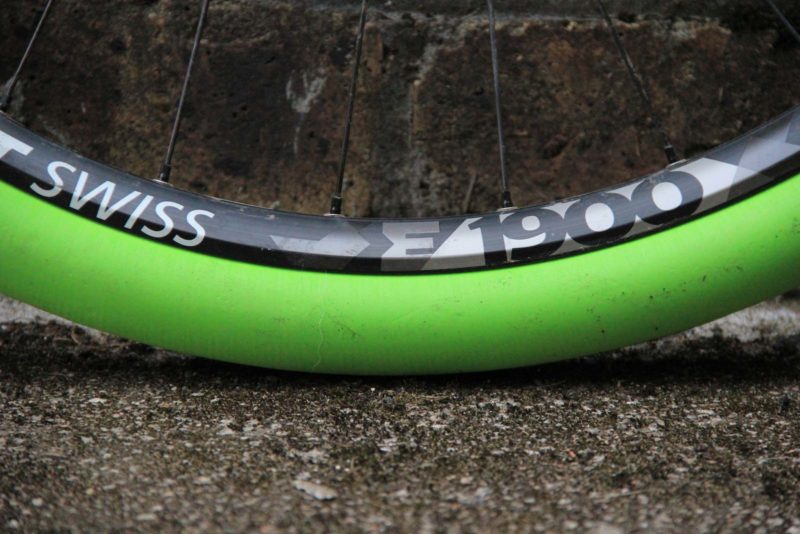 Vittoria’s mountain bike rim protection offering comes in the form of the bright green Airliner tire insert, retailing at $54.99 USD. We put it to the test inside a Maxxis Minion DHR II Double Down Casing tire on a rear 27.5″ Nukeproof Horizon V2 alloy rim. I rode this combination over my regular 19-21 PSI range and, to be thorough, dropped that to 12 PSI later on to ensure I was achieving frequent bottom-out, really putting its pinch-flat protection capabilities to the test. Here’s how the Vittoria Airliner MTB Tire Insert fared in our hands. 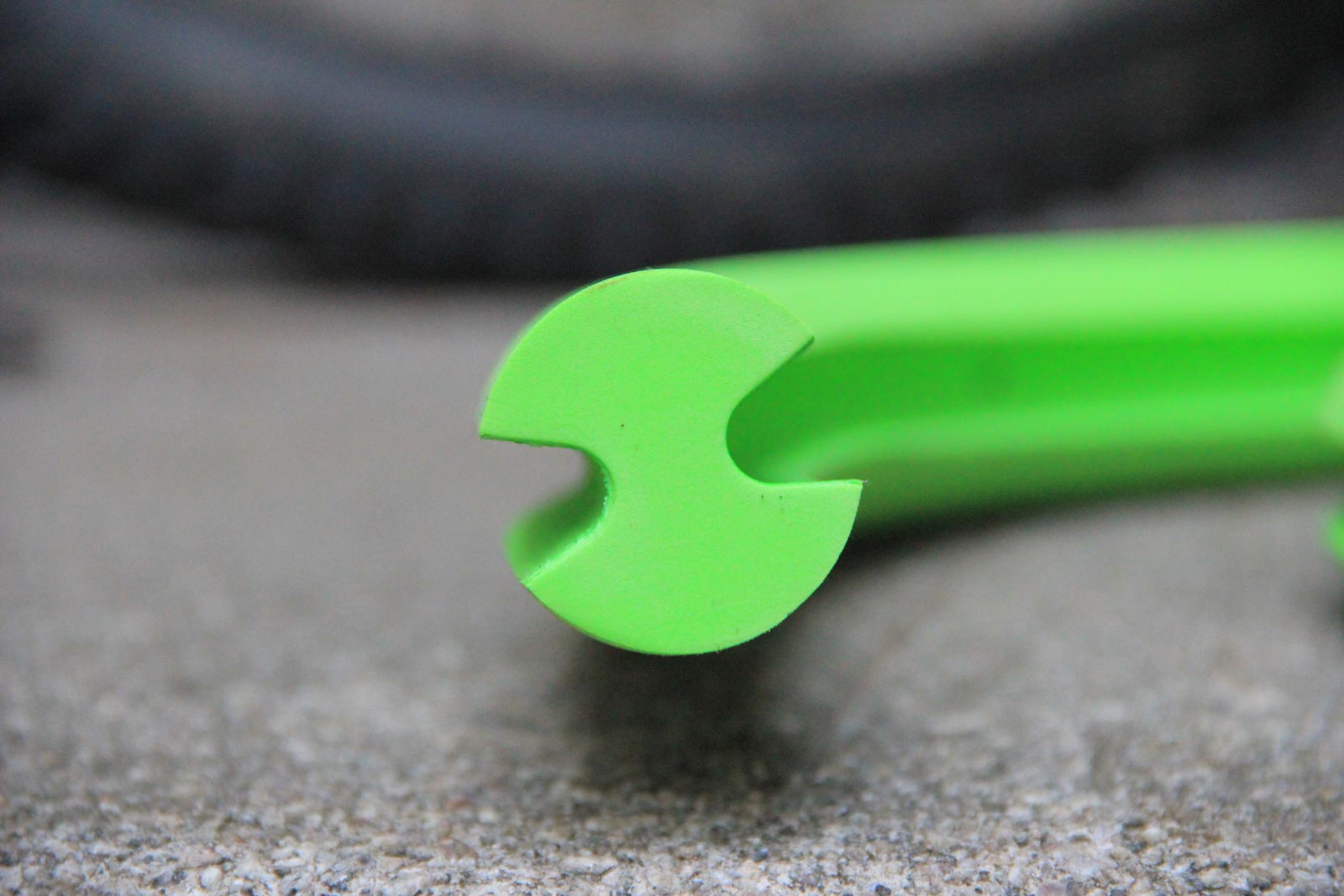 The Vittoria Airliner is composed of a dense, closed-cell polymer fashioned into a tubular shape with deep, wide channels running its full length. Each insert will fit 26”, 27.5” or 29” wheels; it is shipped to fit a 29er but is easily cut it down to fit the smaller wheel sizes with the use of a sharp knife. 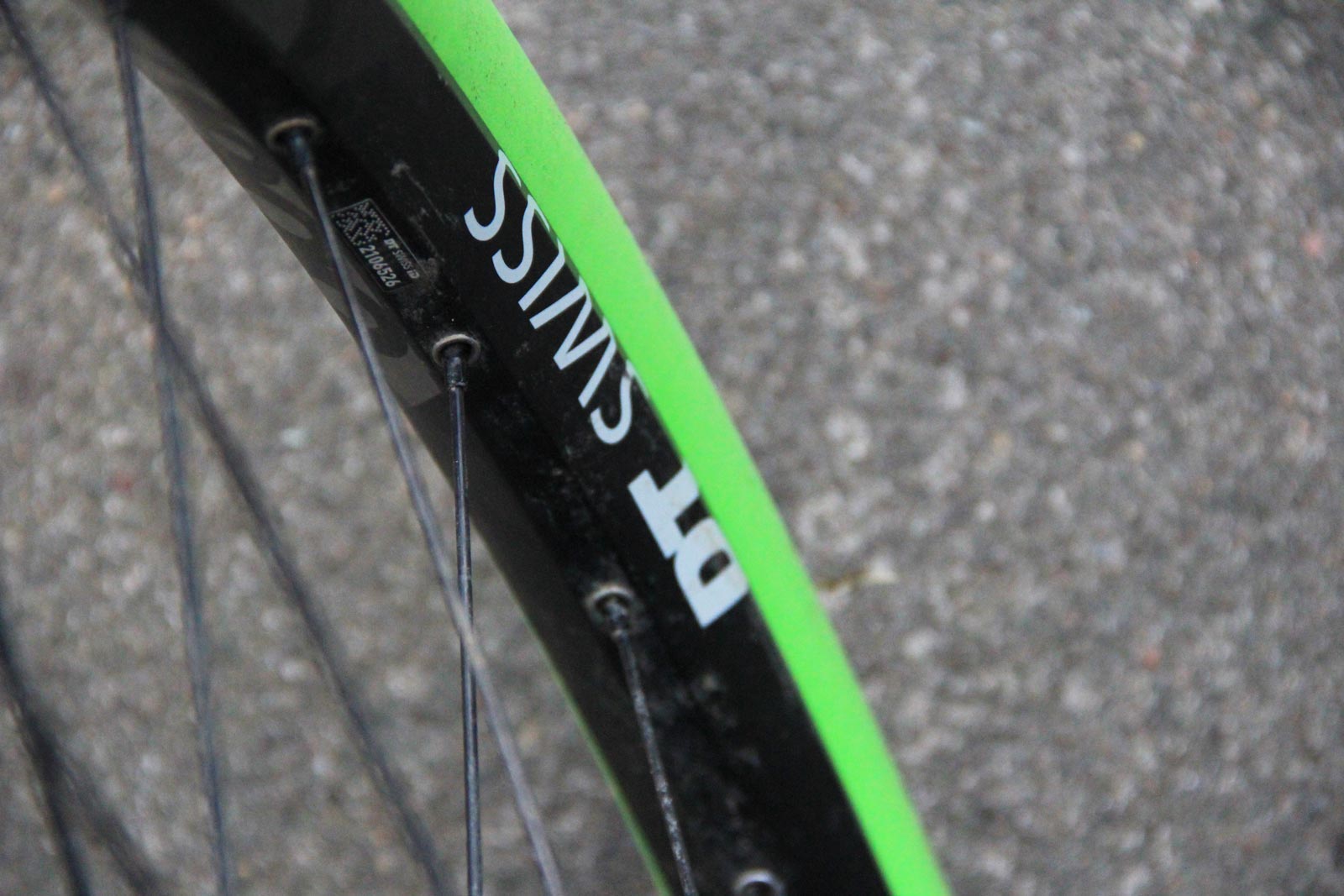 The idea is that, in a pinch-flat scenario, the Airliner provides cushioning between the tire and the rim, protecting it from dents or, in the case of carbon rims, a crack. Pinch-flat protection isn’t the only claimed benefit, though. Vittoria also say the Airliner is designed to enhance ride performance by allowing the tire to remain stable and controlled, even at low pressures.

Upon impact, the corner edges of the channels flexing first, with the force progressively building to the thicker portion as the tire is compressed. Vittoria say this allows the tread to remain flexible, increasing traction, without sacrificing impact resistance. It is also marketed as a run-flat insert, too.

The Vittoria Airliner is firm to touch, with the polymer rebounding pretty slowly following compression.

First, full disclosure. Due to some unfortunate OTBs over the last few years, a few key ligaments in my fingers and thumbs are compromised in their ability to withstand the loads associated with tire insert removal and installation (it’s OK, you can put your violins away). Lucky for me, the very capable hands of mechanic Tom Williams were available to help in this regard. 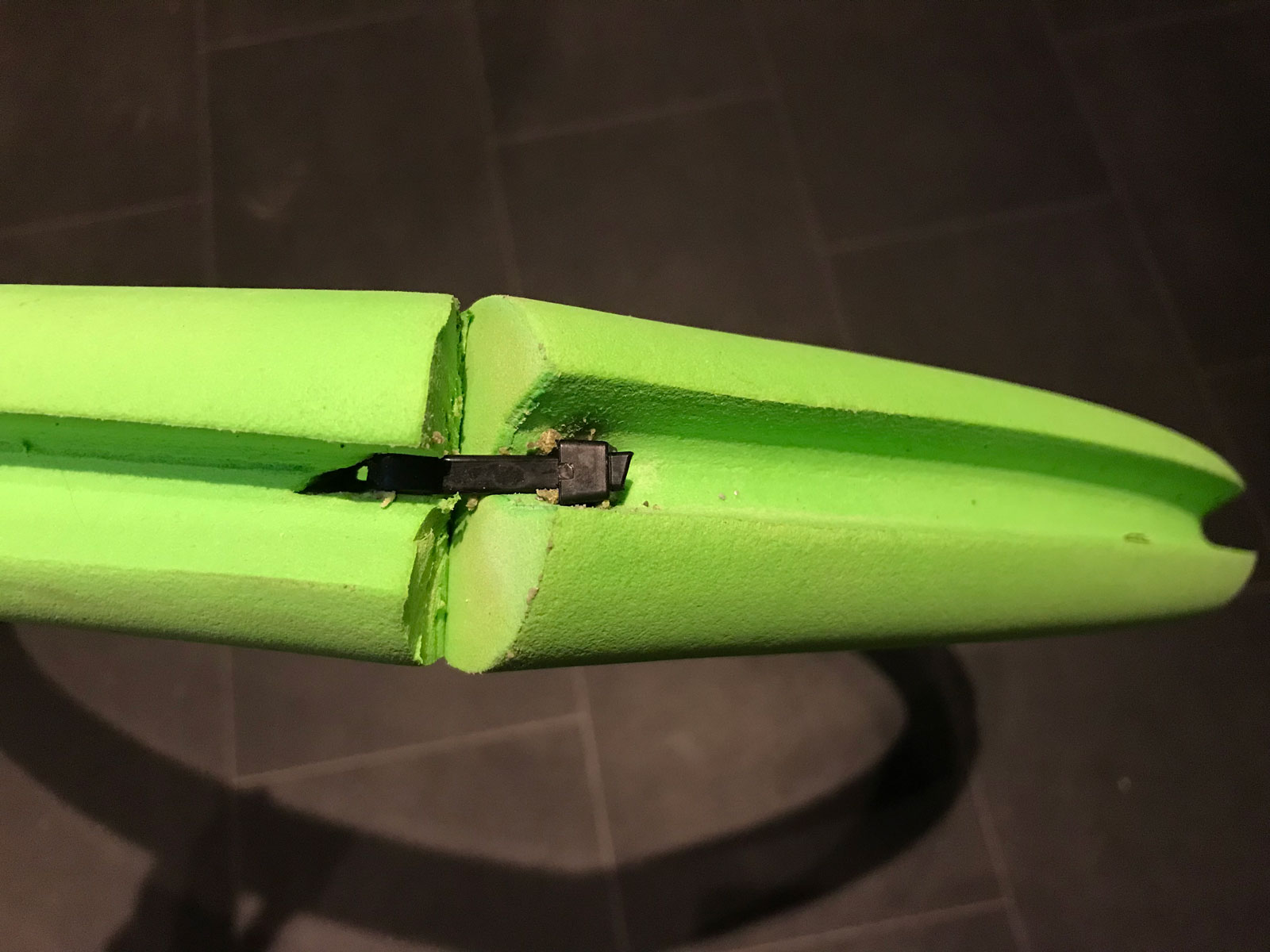 The deep channel of the Airliner negates the use of special insert-specific valves. Photo taken after several weeks of use of the Vittoria Airliner.

Getting the Airliner installed in the 2.3″ Minion DHR II tire proved no trouble for Tom. Installation is, believe it or not, much like a regular tubeless setup; install one tire bead onto the rim, push the Airliner inside the tire and onto the rim, then proceed to install the second bead onto the rim. That last bit is the trickiest bit. The final section of bead to go on was tighter than usual, but Tom actually managed it without the use of tire levers. You’ll see some installation videos floating about the internet that recommend wetting the Airliner before installation to provide a little lubrication. We didn’t find that necessary in this case. 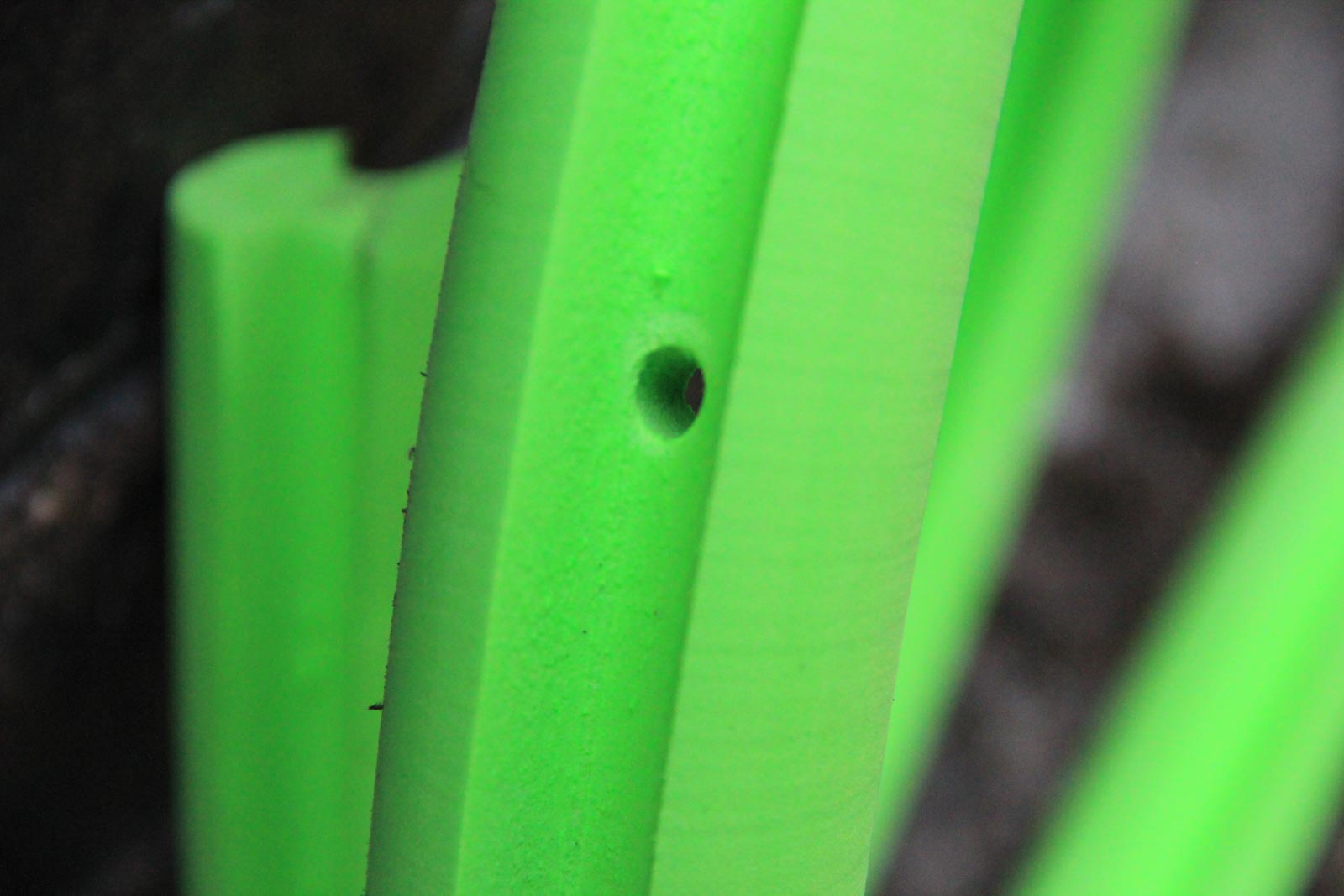 Thanks to Stan’s The Injector, Slicy Products Banana Sealant was added to the tire after installing the insert, by injecting it through the valve stem. Highly recommended, by the way. As the Airliner is actually narrower than the tire sidewalls, there is plenty of room to allow sealant to flow freely around the tire. There are also three holes placed along the Airliner periodically to allow sealant to move from the rim side to the tread side. The tire was seated effortlessly with the use of a floor pump, and held pressure from the word go. 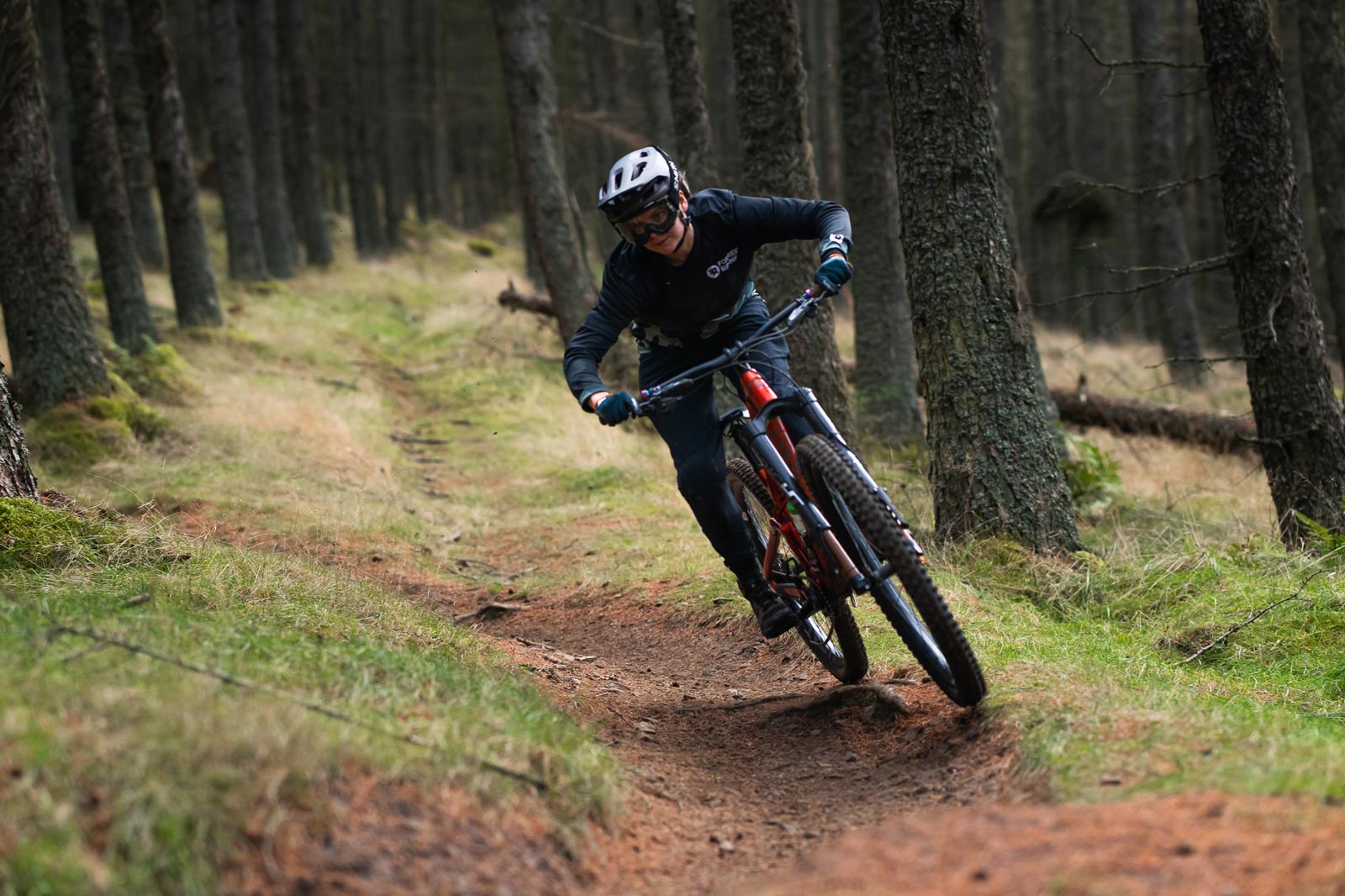 It has to be said, for the most part, I barely noticed the Vittoria Airliner at all. The added weight (165g) never bothered me, and the insert never audibly rattled during rough descents, which is more than I can say for the RockStop and Nukeproof ARD inserts I tested last year.

To begin the test I ran my usual 19-21 PSI in the rear tire, and noticed no tangible change in ride quality. The Airliner was obviously doing its job without fuss. The photos here show some of the more mellow trails ridden during the test, but I promise there was a good selection of loose, rocky trails thrown in there for good measure. During the three week test period, I did puncture the rear tire once; the offending hole was mid-tread (i.e. not a pinch-flat), and likely inflicted by a particularly pointy rock. We can’t blame the Airliner for this, as it’s not the kind of puncture it was designed to prevent. 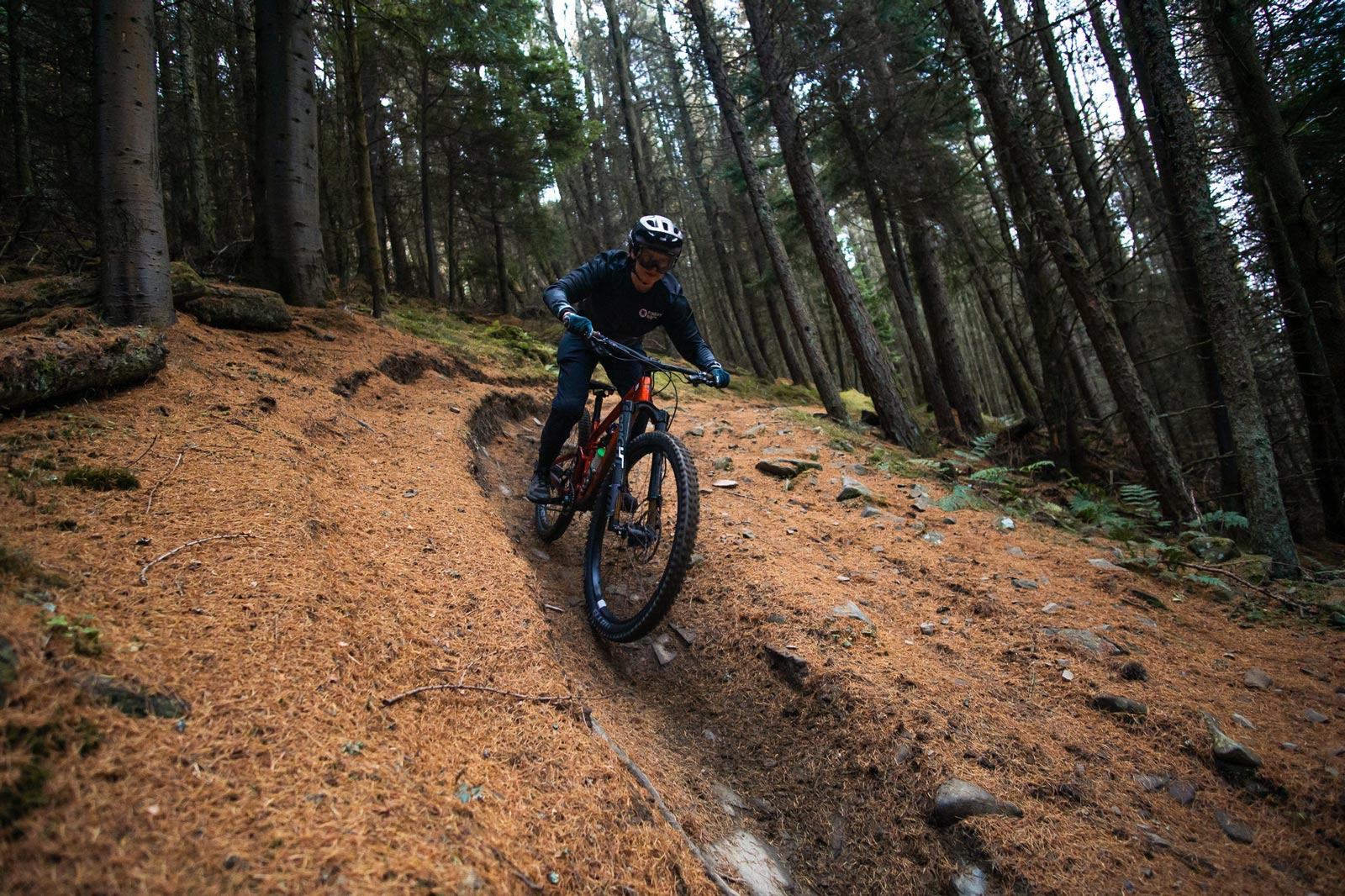 Throughout the test period, I did drop the tire pressure incrementally. Dropping to 17 PSI, I noticed no tangible changes in ride feel. At 15 PSI I did start to feel the rear tire wallow in turns without the sidewall support of proper inflation, and loss of grip as a result. Again, I dropped the pressure even further, to 12 PSI, just to be sure the insert was getting a hammering with multiple tire bottom-out events per run. Despite my best efforts, I failed to pinch-flat the tire. 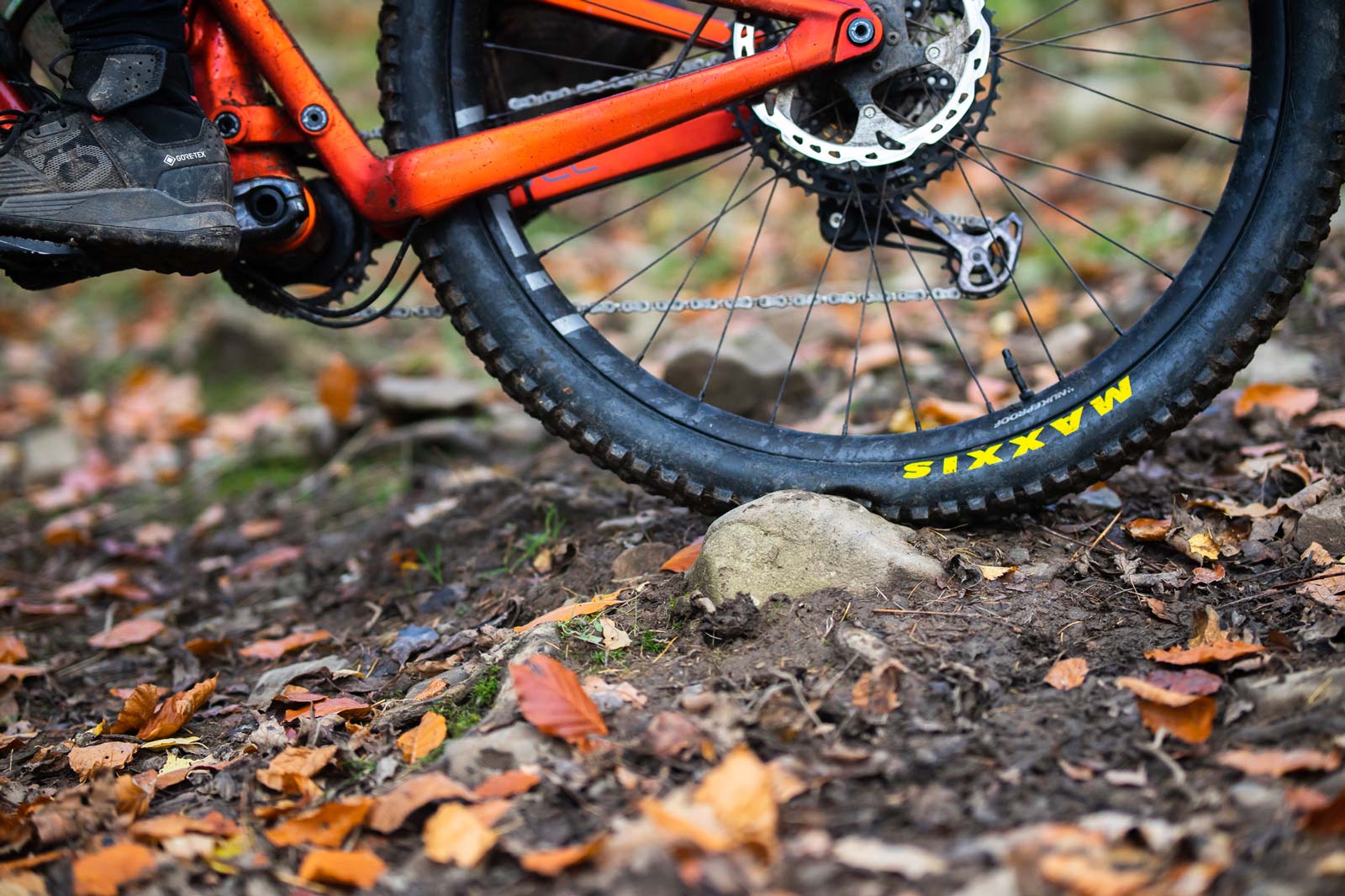 NOT a riding shot. Here, the tire is deflated, pushed up against a rock, with my full 60kg pushed down through the bike – for visual purposes, just so you can see where the protection of the Airliner begins. Credit: Blair Kemp.

As mentioned earlier, the Airliner is marketed as a run flat insert. If you puncture mid-race run, it will get you to the bottom without writing off a rim. I can’t say I tested this particular aspect of the insert to the absolute maximum, though I did bumble down the lower section of a DH track with the tire completed deflated with no drama to report.

At the end of the test period I removed the Airliner to inspect for signs of damage. This was do-able with use of a DH tire lever; after releasing the air, I slowly made my way around the tire with the lever, pushing the bead down and off the rim. I was then able to create enough slack to get the lever up and under to remove the insert. 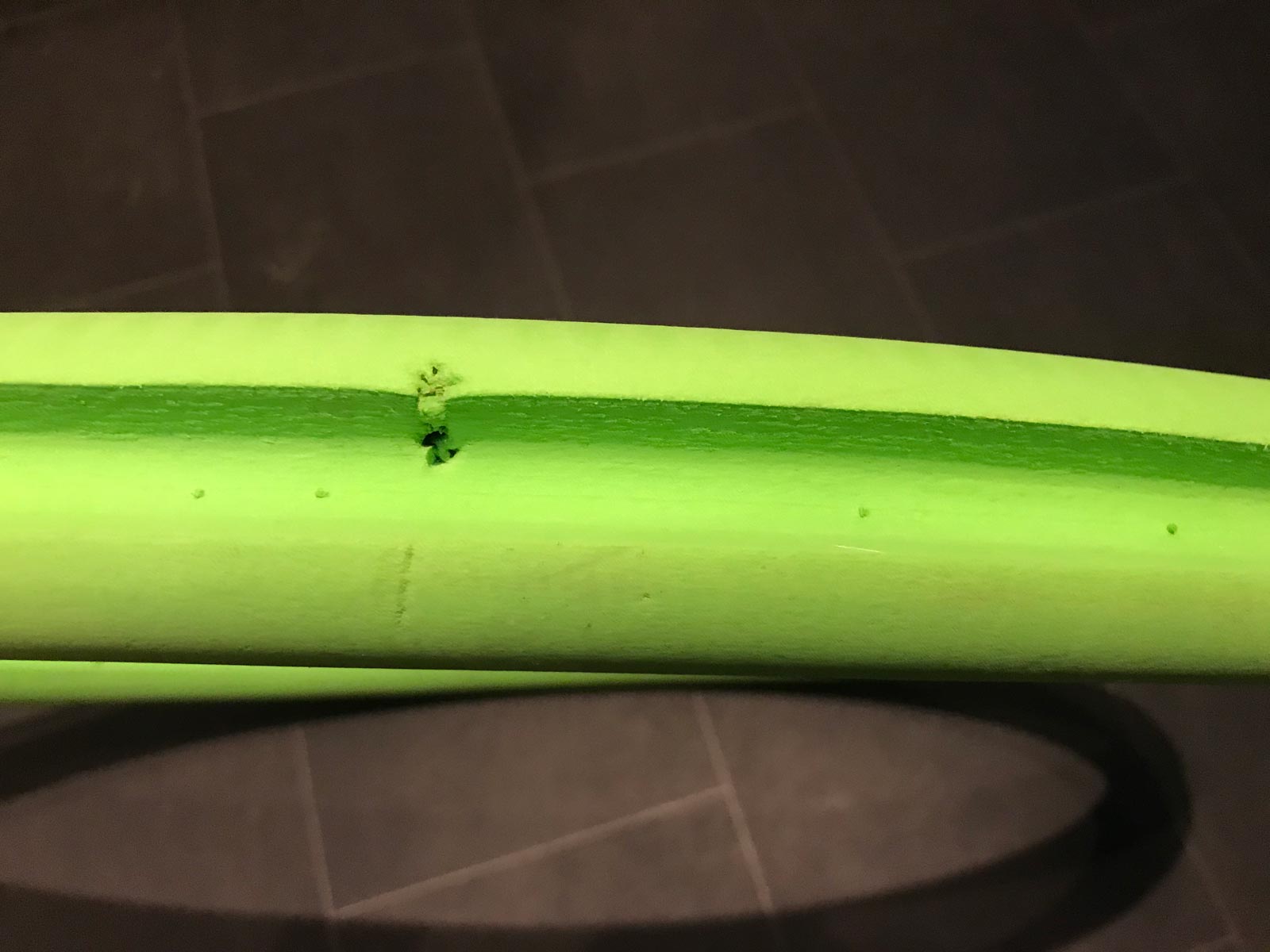 The Airliner fared very well. There was only one notable area damaged; a cut, several mm deep, can be seen. It doesn’t go right through to the opposite side, though.

Can I recommend the Vittoria Airliner MTB Tire Insert?

Yes. While it isn’t our favorite MTB tire insert, it certainly does the job. We’re convinced on its ability to protect against pinch-flat punctures, and its ability to offer some side wall support. On that last point, the Airliner is no match for the far more expensive (and much heavier) CushCore Pro with which I was able to run ultra-low pressures with no tangible loss of side wall support in corners. This is likely down to the fact that the Airliner is much narrower than the CushCore Pro (60mm wide), but it has the advantage of being much easier to install in the first place. It would be interesting to see how well the Large Airliner (50mm wide) could improve performance by filling the tire more. 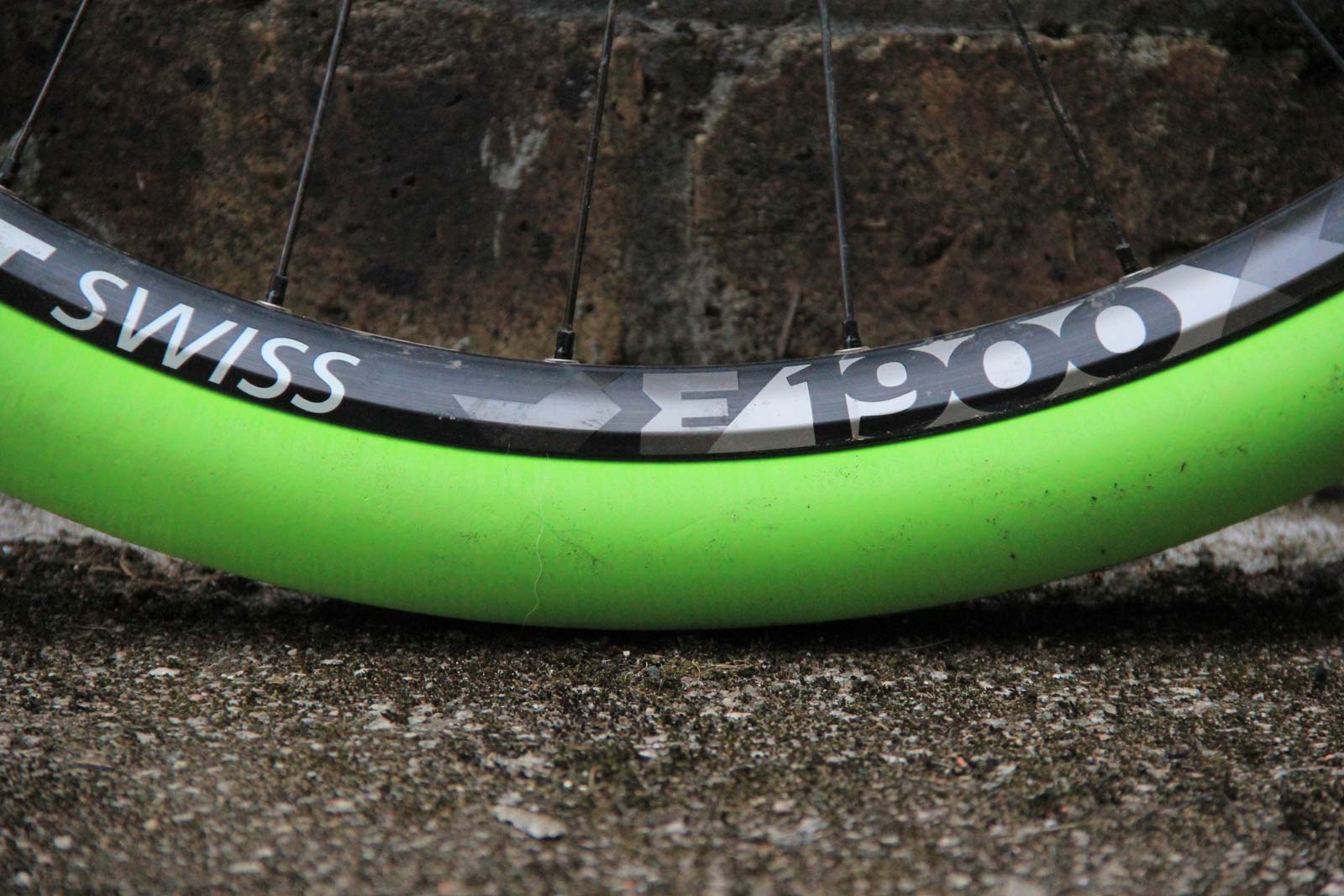 At 165g, the Vittoria Airliner is one of the lighter inserts we’ve tested, but still has a good 10g or so on the Nukeproof ARD and Rimpact PRO. Its sealant channels pretty much make that 10g immaterial, however, when you consider that I needed to use far more sealant than usual with the Nukeproof ARD inserts that lack sealant channels altogether (and require use of slightly heavier insert-specific valves).

Retailing at $54.99 USD per insert, the Vittoria Airliner is a fair bit more expensive than the Nukeproof ARD, what I would consider its closest competitor ($64.99 USD per pair), but a lot cheaper than the likes of Rimpact PRO and CushCore PRO. That said, the aforementioned all come cut to size and glued up ready to go, so there’s one less step in the installation process.

Swings and roundabouts, as ever.

The Vittoria Airliner MTB Tire Insert is available now at Backcountry for $54.99.

Liner technology and tuning is the next frontier in wheel system evolution. We’re just scratching the surface.

And your favorite MTB tire insert was?

Try the Meganorris sandwich or hamburger some time. Same rim protection as cushcore but easy to get the tire on and off.

Looks like the old “pool noodle” trick with the zip tie..

Is there any fear with these or any other foam inserts of soaking up sealant, or having to run twice as much?

The ‘closed cell’ aspect means that it won’t soak up sealant. However, the surface area holds sealant just like the tires and rims would. My experience with a couple of setups has been to use ~50% more sealant than recommended/usual.