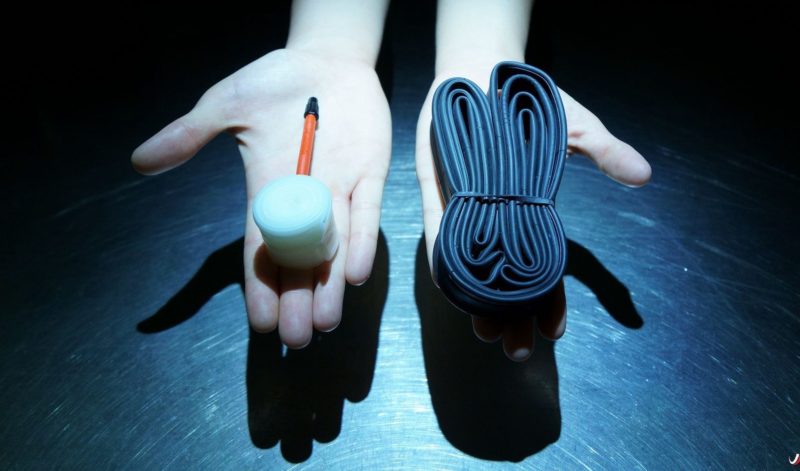 Vittoria spent the last year researching materials and production to try and produce a new generation of lightweight inner tubes. With the bike company’s latest product, the Ultra Light Speed, it claims to have accomplished that goal.

Compared to Vittoria’s standard butyl inner tubes, the new ones are 70 percent lighter, 14 percent faster and 57 percent more resistant to punctures. If you’re worried about the environment, fear not, as these tubes are also recyclable. 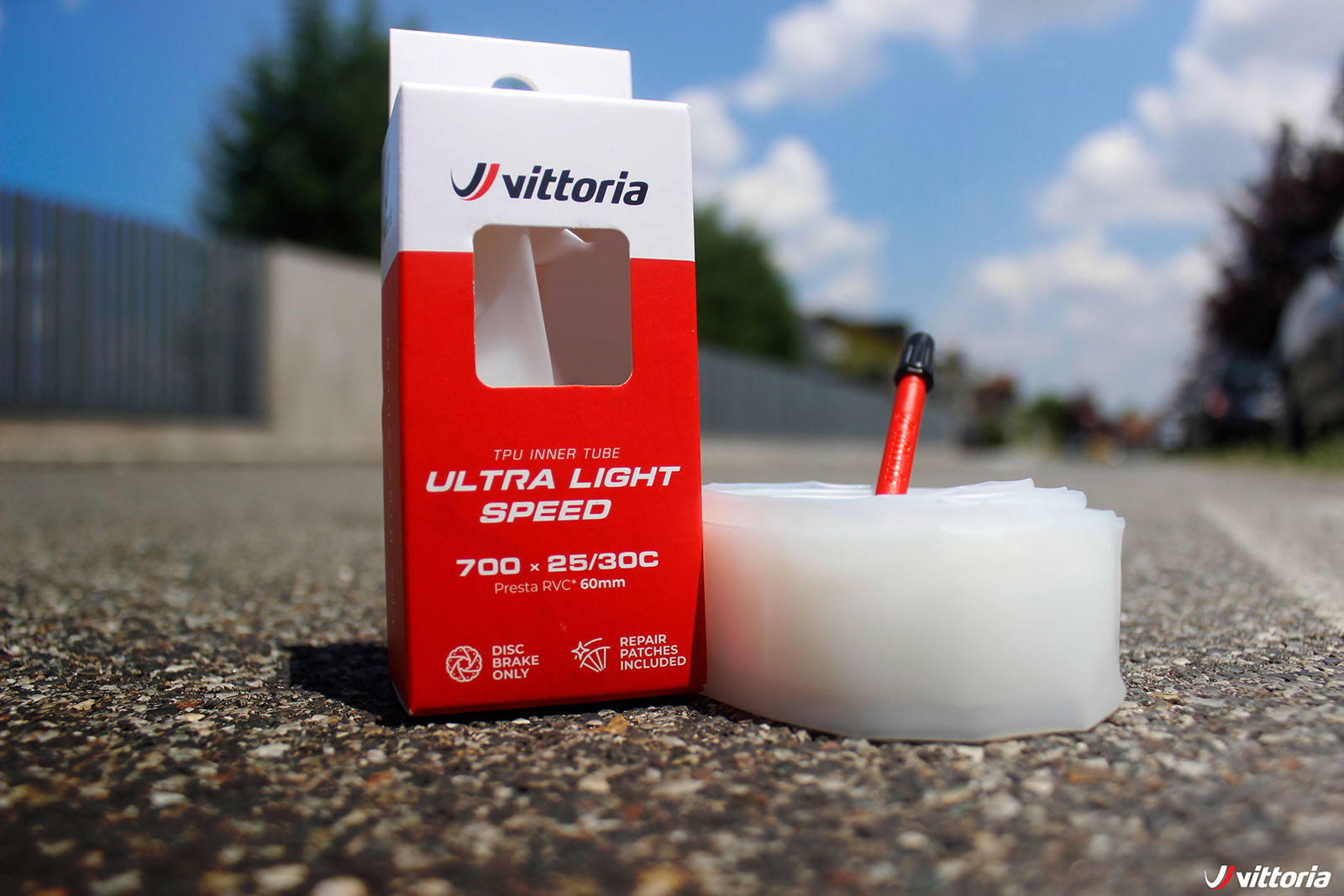 If the technical name of this material sounds vaguely familiar, that’s because it’s everywhere. Google it and you’ll get what we mean. Its extreme durability and wide applicability, which Researchgate.net briefly summarizes here, made it popular across industries and consumer products.

Vittoria clearly agrees. TPU is not only recyclable, but flexible in its uses. It’s stable from 47°C all the way up to 100°C (116°F-212°F), and retains its shape even when stretched thin, the company said.

It’s also elastic, airtight while retaining air pressure, and resistant to punctures. Even if it a cyclist does manage to puncture the tube, Vittoria maintains that it retains air longer when compared to butyl and latex.

Compared to butyl inner tubes, which usually are 1mm thick, the TPU tubes measure just 0.35mm. As a result, they can only be welded with “high frequency technology,” Vittoria said.

Speed freaks among cyclists may embrace the Ultra Light Speed tubes for their ability to reduce the rolling resistance caused by internal friction between the tire and the tube, Vittoria said

“So if you’re that rider who uses folding tube-type tires, this is the easiest way to drop weight and make your tires roll faster,” a spokesperson says in the above video. “If you’re a tubeless rider, this is the ultimate accessory to keep in your jersey pocket or saddlebag because it takes up no room and weighs next to nothing.”

If you need a refresher on these differences, check out this handy explainer from a Vittoria white paper.

While TPU offers many benefits, it also has a significant downside. It’s highly sensitive to heat above its established threshold.

“High temperature is the sworn enemy of thermoplastic polyurethane,” Vittoria said in the release. In rare circumstances, rim brakes can overheat the rim to extremely high temperatures, creating a potential safety issue.

That’s why cyclists should only use TPU tubes on bikes with disc brakes, the company said.

“To guarantee total safety for the rider, we recommend using these inner tubes exclusively with bicycles equipped with disc brakes,” Vittoria emphasized. 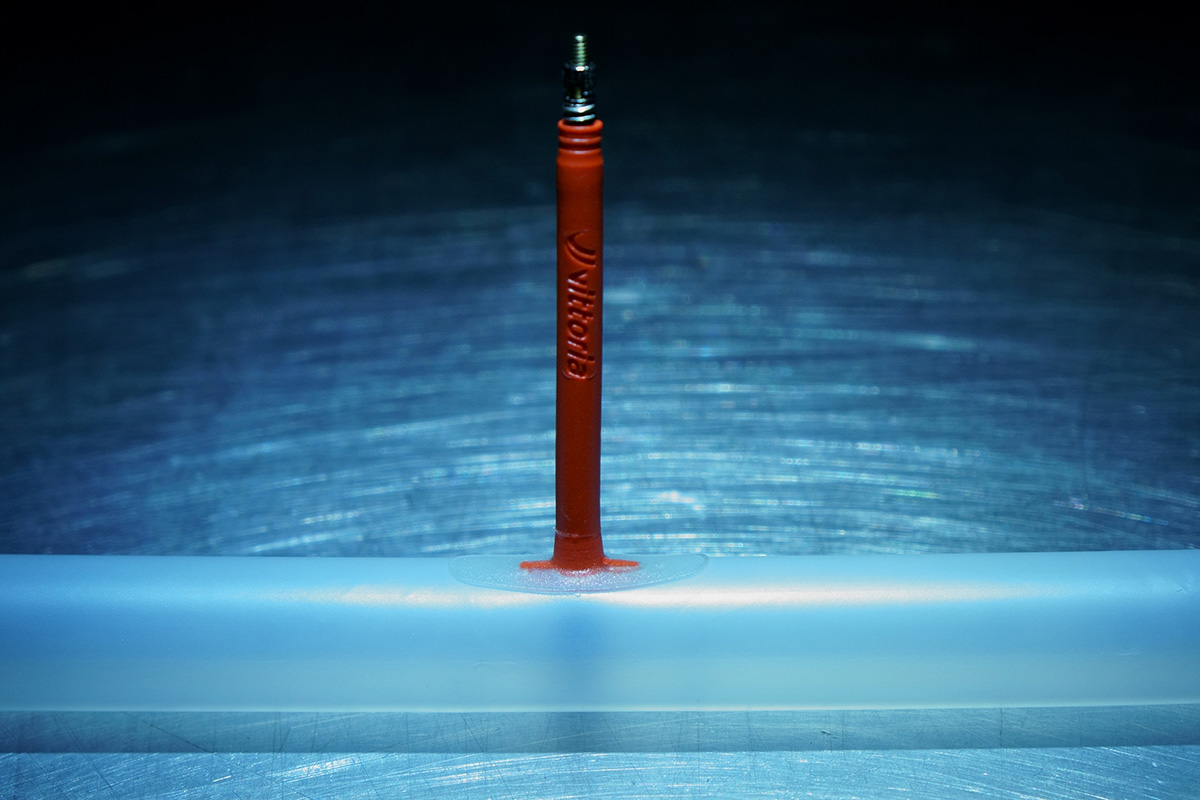 While Vittoria said the TPU tubes resist most punctures, the Ultra Light Speed still comes with a repair kit included. If a puncture does happen, the repair kit required is “not easy to find,” Vittoria said, electing to chuck one in along with the tubes.

In seeming contrast to the rarity the company claims over the kit, it includes a self-adhesive patch and a napkin.

The Ultra Light Speed come in a single length, but with an extendable valve. It’s available in 700x25c and 700x30c with a 60mm valve and a removable Presta core. That makes the tube fully compatibility with any rim depth up to 50mm. By removing the Presta core and using valve extensions, the inner tubes can also be used with higher rim profiles, Vittoria said.

Can these new tubes be patched as easily as latex tubes?

From the article:
“While Vittoria said the TPU tubes resist most punctures, the Ultra Light Speed still comes with a repair kit included. If a puncture does happen, the repair kit required is “not easy to find,” Vittoria said, electing to chuck one in along with the tubes.”

John A
Reply to  Dinger

Doh! I somehow missed that. I’ll be sticking with latex tubes for the foreseeable future. I’ve got a “sacrificial” latex tube I use as a patch and it’ll probably give me over 100 latex tube patches before I need another so I’ll never have to worry about finding a patch kit. I think I have 4 or 5 latex tube patches already on one tube and it’s still going strong.

That’s a good tip. What do you use for adhesive/prep to patch your latex tubes?

John A
Reply to  Dinger

I use “Xtra Seal” Vulcanizing cement. It works great and truly bonds the two pieces of latex together with basically no mess. https://www.amazon.com/Xtra-Seal-Chemical-Vulcanizing-Cement-oz/dp/B01J47PO8W

You can also buy it at your autozone/oreilly’s auto shop in the USA.

Thanks! I have a couple of tubeless tires that have plugs that I’d like to do a more “permanent” repair on, too. I think I’ll get some of this and some scrap tire casing/fabric and see what I can do.

Collin S
Reply to  John A

I’m assuming they will be like any other TPU tube, in that they are pretty finicky. You have to use a special patch and reviews have been mixed on them. See the Turbio, Revloop, Conti, Schwalbe, and a couple of other brands. I have some TPU tubes I bought off of aliexpress and so far so good. It is crazy how thin they are. They do hold air better than latex.

Bgfd
Reply to  John A

Good to hear that it comes with a repair kit and that it uses a self adhesive patch. The Tubolito doesn’t come with a kit and it’s neither easy to find or use, it requires using glue and up to 30 minutes to dry.

It’s all great till the valve stem breaks off..

I’ve had problems with both Revoloop and Tubolito TPU tobes. The revoloop ones the valve core didn’t seal to the plastic valve stem (Vittoria seems to be same design). With Tubolito they would just gen pinhole leaks everywhere, inside seam and where the stem is bonded to the tube

Good idea, but unless someone explana how they have overcome the issues with previous iterations I’m not interested.

These are a must for plus size mtb tires

I’ve tried Tubolito and Revoloop TPU tubes and the latter seems to hold up better and the 80mm valve stem length is a true 80, rather than a 40 with a valve extender as with the Tubolito. The standard version of both can be used in a carbon clincher with rim brakes and hold air better than latex tubes.

Instructions with Schwable’s Aerothan tubes, also TPU, say that they should not come into contact with sealant. If this is universal for TPU it means they are not practical tubes to carry ad backup for a tubeless setup

Deputy Dawg
Reply to  Will

Some sealant is corrosive and no tpu shouldn’t be used as tubeless back up unless the Tyre is fully wiped clean, which in all honesty you should be doing if the worst happens any how. Its written plain as day on the tpu tubes packaging which flys in the face of there marketing material. Unless Vittoria has used a slightly different material I can’t see how this would be any different for them.

blahblahblah
Reply to  Will

true but they will survive the trip home

I was in Greece bikepacking and had 1 wheel with tubolito, I had several punctures and what a pain in the a….., first it is almost Impossible to see the hole, so it is guesswork where to put the patch, second I could do the patching in a dry and controlled environment, it would have been next to impossible in wind/dust/mud/rain…. The drying of glue the 30 min pressure time, back home I have thrown away my tubolito’s, never again

I’m sorry, I definitely can’t agree with what you said, I’ve been using tubolito tubes since 2017. The best I’ve ever driven in run-flat properties. I use Schwalbe patches that are self-adhesive and they hold up like a rock.

I’ve been really happy with the Pirelli version of these tubes. Super light and fast. They only two flats I’ve had have been issues with the valve connection failing, no on the road punctures. Also they are approved for rim brakes.

I have used tubolitos for a while and they’re light but don’t seem any more puncture resistant than normal tubes. Originally I tried their self-adhesive patch kit and it did not work at all. Hearing about 30 minute drying time on the glue version makes me want to switch my road bike back to ordinary tubes.
To be honest I’ve never gotten on with a tubeless setup on any bike I’ve had from road through to plus-size mountain. So for me the best solution seems just to be a good quality ordinary tube.

Shand Ioma Hardtail goes as slack as 58°, has multiple configurations