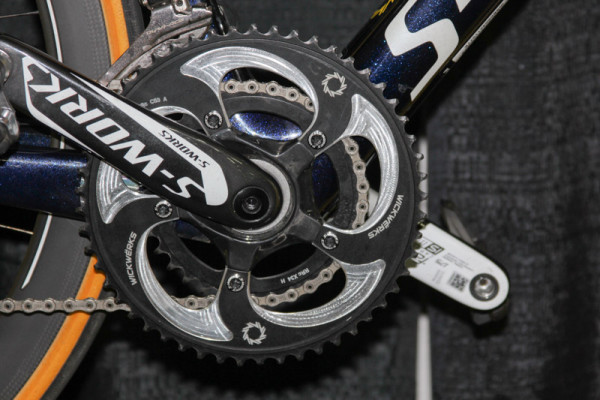 All the talk about wide range these days deals with the cassette, but Wickwerks is putting it at the front of the bike, and that could mean major changes (and improvements) to Junior race bikes. Oh, and anyone else that’s been looking to customize the gap between big and small chainrings without sending shift quality into the gutter.

So, whether it’s running their new 53/34 combo or 41/33, with their fast shifting BRIDGE technology and a new front derailleur mount adapter, Wickwerks says they’ve found a way to give you the best of both worlds… 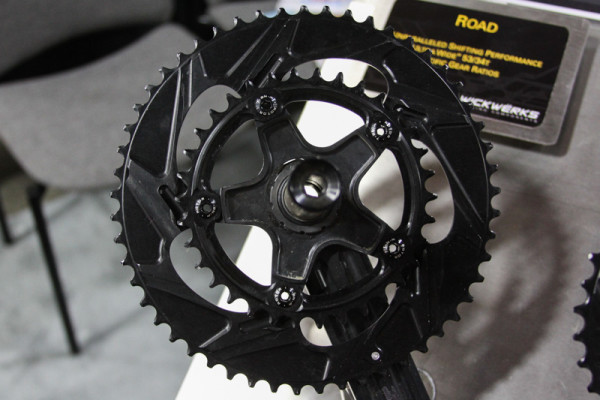 We’ve covered Wickwerks plenty in the past and one thing is for sure, they make nice stuff. First on the list this year is their new 53/34 chainring system. This gives you a little more climbing gearing while keeping the standard 53t. It uses their fast shifting BRIDGE system that quickly and accurately shifts the chain from one ring to another. Even with such a big jump in teeth, they say their system works just fine. 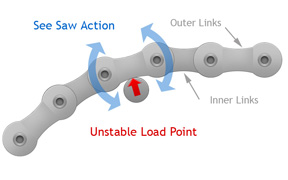 Wickwerks is known for speedy shifts thanks to their unique BRIDGE system, shown below. Above is the relatively unstable support created by pins, which only carries a small portion of the chain.

By contrast, Wickwerks’ bridge runs the length of the gap to lift the chain fully and in a straight line. 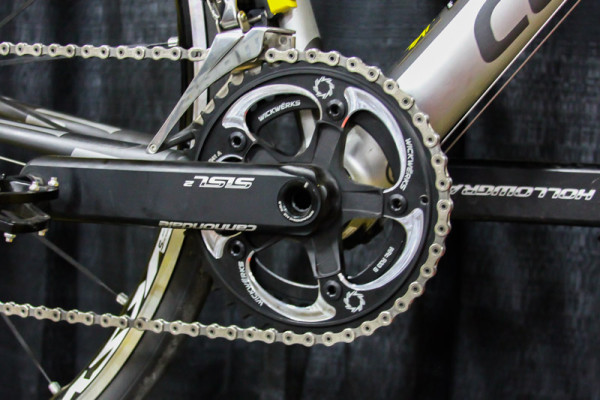 For those not in the know, Junior racers are limited to what gears they can race. USA Cycling limits Juniors’ “roll out” to a maximum of 26 feet (7.93m) per crank revolution. This may sound as easy as just blocking a couple of cogs by adjusting the limit screw on the rear derailleur, BUT, they don’t allow that. So when buying a new bike, juniors have to purchase a cassette who’s smallest cog is a 14t (assuming the big ring is a 52t). That is not only hard to come by, but there is little to nothing in existence (that is easily accessible or affordable), in 11 speeds. The 9 and 10 speed cassettes that are available are also heavy. This means buying a new bike with 11 speeds isn’t at all convenient.

So, Wickwerks developed a 41/33t chainring system that works together and can use just about any standard off the shelf cassette. That includes an 11 speed, light-weight 11-28 SRAM Red cassette. When you consider the convenience and the ability to use lighter weight parts, saving up to a half pound or more, it’s hard not to say every Junior should have this. 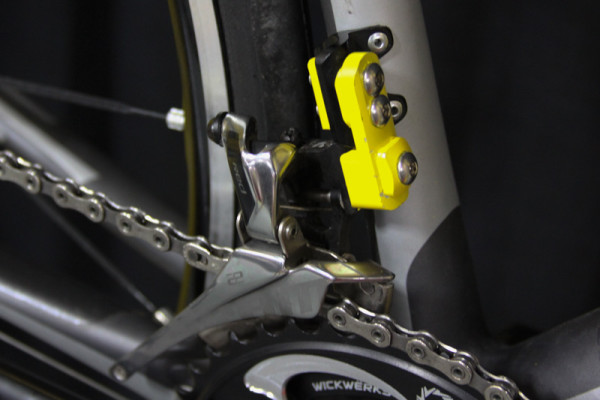 They even make a front derailleur adapter to bring the cage down low enough for it to work properly.

Why the reference to Narrow/Wide in the title?…there is no narrow-wide tech in place on these rings.

@Andrew they’re referencing the tooth difference on the chainrings. 44/33 narrow, 53/34 wide. Not the best phrase to use when talking about chainrings given the existing purpose for it, but meh, it’s a title.

I used WickWerks chain rings for a brief period on my MTB. Very impressed with shift quality. I would still be running them but my bike doesn’t jive with a FD so I went 1x (FD contacted a suspension link near full compression)

Shimano, campagnolo and Miche sell “junior” cassettes. Your LBS may not have them in stock but can order them. I wouldn’t really say there is “little to nothing in existence”.

That said, the 44×33 gearing combo is interesting and not only for the juniors.

They make great stuff, they need to make more though. hehehe The 42/34 cx rings have been out of stock more than they have been in.

I’ve been running a 48/33 12-23 (or 25) chainring/cassette combo for about four or five years. Going to look to see if I can buy the 33t chainring individually as they’re rare as hen’s teeth for a 110bcd crank.

Maybe someone more familiar with junior racing can speak to the rule, whether it allows an 11t cassette with a max “26 foot roll out” or whether the 14t cassettes are required. I was under the impression it was the latter.

My son, a junior racer, uses this with a standard cassette. Works great.

I coach juniors, the rule is 26 feet per revolution, in max gear, period. It doesn’t matter what gears you have.

The most common is the 52-14, with that, you’ll always pass, unless you have giant tires. For TT bikes, I have set up a 45-12, and as long as you don’t run bigger than an average 25 width tire, you will just barely pass.

With the 41-11, and my math, you are really really close to that 26 foot mark, to the point where you may have to only run 23 tires depending how picky your official is.

Say … what’s the idea behind this “26 feet per revolution”? From a full stop the cyclist must revolute only once the cranks and the intertia must move him 26 feet forward or probably I really don’t know the racing slang here :\

From what I can remember of my days of junior racing (almost a decade ago now, wow) they checked our gearing at the national/international level by looking at the gear as much as doing a proper roll out. This was back when you could block gearing and get away with it at the local level. I can tell you that the 45T chainring gets you a higher gear but the 52 was desirable because it looked better and the change was more dramatic.

26 feet per revolution is a rule for 18 and under racers, usually the way it is checked is by taking the bike and shifting it into it’s highest gear, putting one crank arm at the 6 o’clock and running the bike backwards, if the bike moves more than 26 feet before the crank goes back to its home position, you either don’t race, or your results don’t count.

The idea of the rule is 2 fold. First, it helps prevent joint damage in a growing rider. Second there can be a big difference in musculature in teenagers, with a lower max. gear, it can stop a huge 16 year old from destroying the field, and his knees at the same time.

There is a huge problem with these. At major junior races like nationals and any UCI races they always have neutral wheels with only junior cassettes. Say you flat during the crit at nationals. You have one free lap to grab a wheel. Now you have to have your own wheelset in the pits rather than just getting a neutral set. Otherwise you will be at a huge disadvantage running a smaller front with a junior cassette. Having raced some junior UCI races, nationals, and international I have seen people do this but with tons of headache and horror stories.

I’ve run a junior team for more years than I care to remember and we always use 45-12 at one point in time you could get a 110mm 45t TA that was nice quality. We use the cheap QBP 45t which shifts good enough up from a 34t inner. Running 52-14 with the Shimano cassete leaves your rider at a disadvantage gear wise or as someone else has stated under geared or over geared if they get the wrong wheel from neutral support. Running this set up doesn’t really make it easier. As someone stated the European rule isn’t 52-15 my riders were just over there it’s 52-14

let me know some thoughts.